Trip Ideas Judith Fein I Never Stopped Going Places During the Pandemic. And It's Taught Me a New Way to Travel

Pisa has nothing on these towers.

Everybody knows the famous Leaning Tower of Pisa in Italy, which tourists flock to in order to experience its 3.97-degree tilt for themselves. And although this building gets all the attention, there are plenty more towers and buildings around the world that are also leaning. Many of these are even leaning quite a bit more than Pisa’s signature tower. All are perfect for cheesy tourist photographs, which will likely involve the subject “propping” them up.

Trip Ideas Judith Fein I Never Stopped Going Places During the Pandemic. And It's Taught Me a New Way to Travel 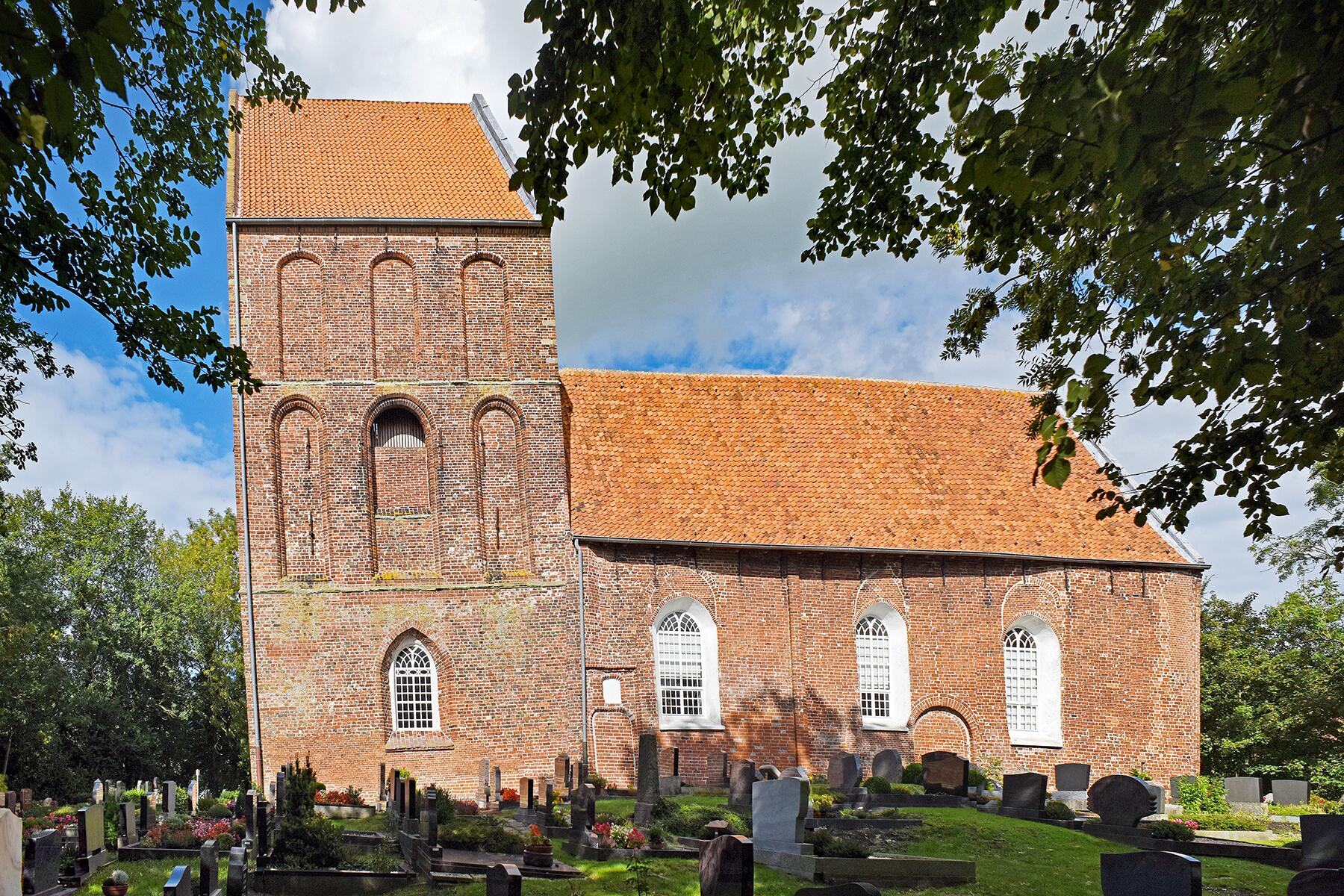 The Leaning Tower of Suurhusen

Once officially recognized by the Guinness World Records as the most leaning manmade building in the world (now a record held by the Capital Gate Tower in Abu Dhabi, see below), the bell tower of the Suurhusen church, which was consecrated back in the 14th century, is indeed not standing very upright. Though it sports a sturdy height of 90 feet, it has an overhang of 8 feet that leans at an angle of 5.19 degrees. The reason behind the tilt has to do with the structure sitting on wet marshland, which, when drained, caused the tower to slant. 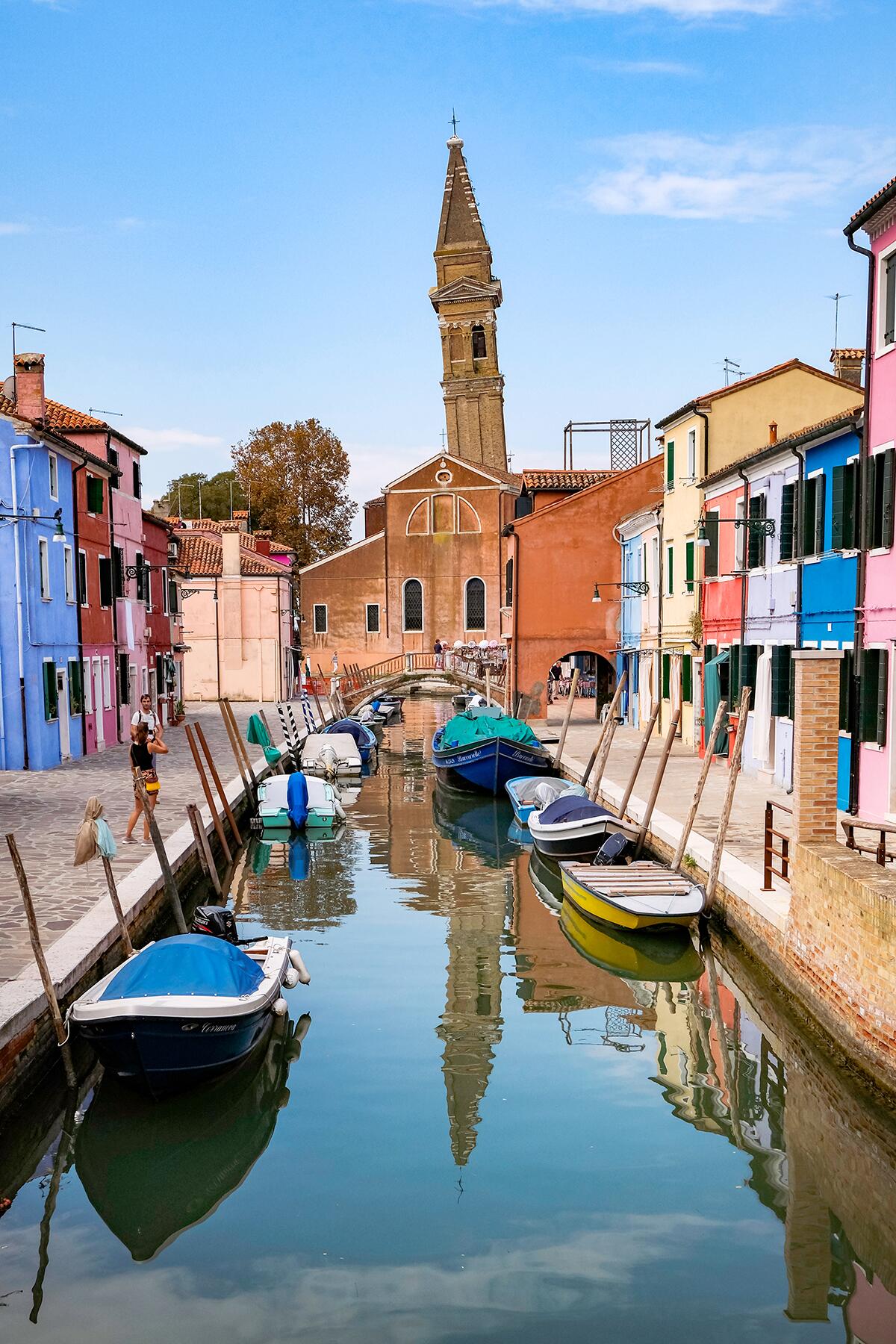 In northern Italy, the leaning bell tower of the San Martino Vescovo church stands, or tilts, on the island of Burano in the Venetian Lagoon, a mere-40-minute vaporetto ride from Venice. The island is famous for its brightly-colored houses and handmade lace, but it also has a seriously leaning tower. The church is old enough to warrant a bit of sagging, as it dates to roughly the mid-1500s; its bell tower has been in place since 1703. The tower stands 174-feet high and is leaning some 6 feet. Whether because of the kilter or not, the golden angel that once adorned the top fell off in a storm in 1867 and was replaced by a not-so spectacular but safer iron cross. 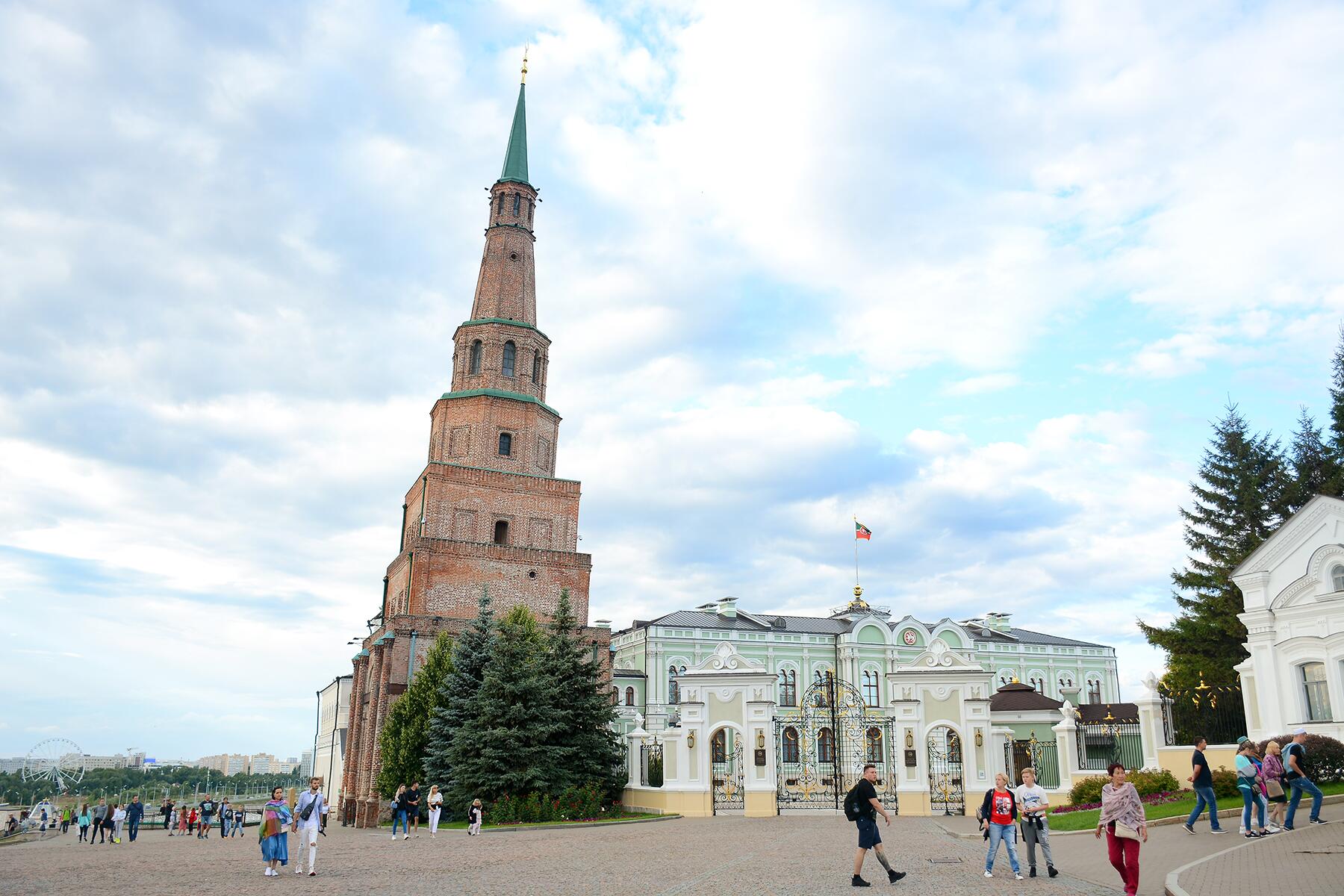 Part of the UNESCO World Heritage-listed Kazan Kremlin, the Suyumbike tower (also called Khan’s Mosque) is a turreted tower whose exact history seems to be somewhat vague with nobody quite knowing when it was built. It does, however, have a suitably tragic legend attached to it which states that Ivan the Terrible erected the tower within six days back in around 1552 to impress a potential, if unwilling bride. She chose to jump off the tower to her death rather than marrying her city’s raider. Standing 184 feet tall but leaning some 6.5 feet off-kilter, the tower was righted somewhat in 1990 but still looks like it’s drunk. 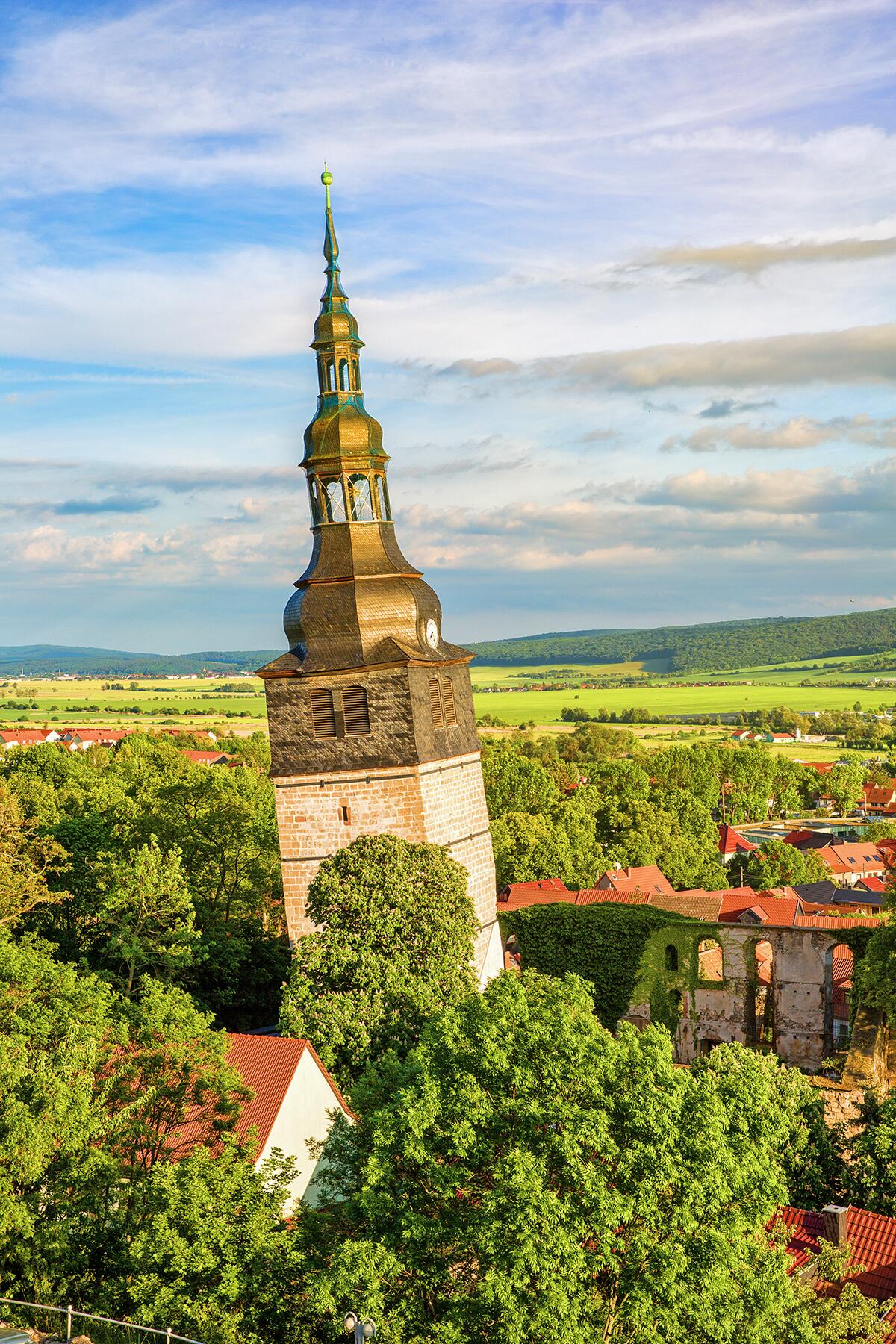 Church of Our Beloved Ladies by the Mountain

The second most-leaning tower in Germany, the bell tower of the wonderfully named Church of Our Beloved Ladies by the Mountain first started to lean back in 1640, some 300 years after it was built. It seems that the sinkholes caused by the salt mines below started the downward trend, which continues by roughly 2.4 inches every year. When last measured, the 184-foot-tall tower leaned at 4.8 degrees, but it has since been fitted with a steel frame to stop it from completely toppling over. 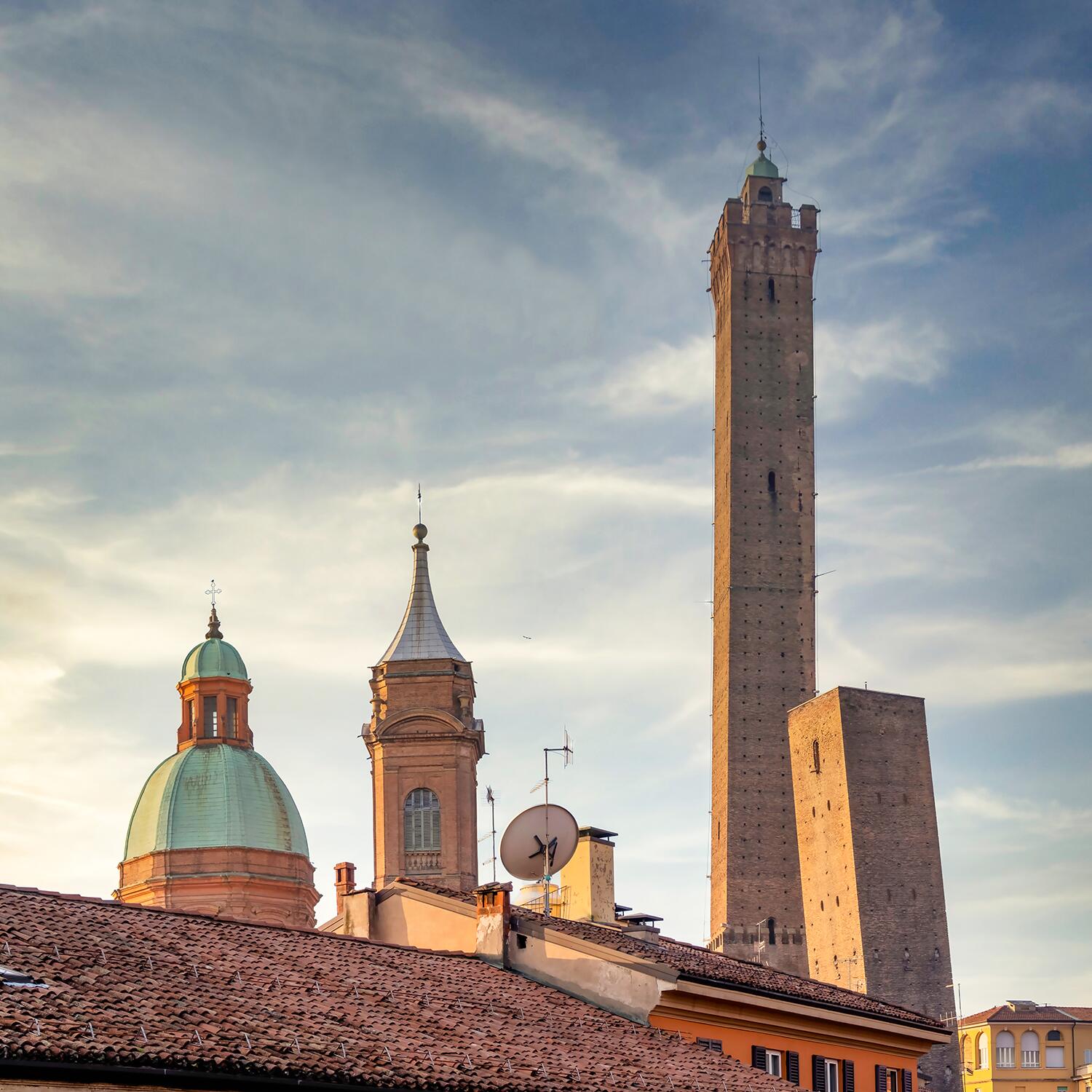 A symbol of the northern Italian city of Bologna, these two towers are not originally bell towers, clock towers, or even lookout posts. No, it seems that they were constructed between 1109 and 1119 by two competing families, trying to prove which one was more powerful. The shorter tower, named Garisenda after the Garisenda family, is 157 feet tall but was lowered at some stage for fear of it toppling over. The Asinelli tower, (yes, named after the Asinelli family), is 319 feet tall, though, reportedly, it was not that tall initially but was later raised. Both families are winners here because while one tower is taller, the other leans further. Visitors can scale the Asinelli tower’s 498 steps for grand views across the city and Italian countryside. 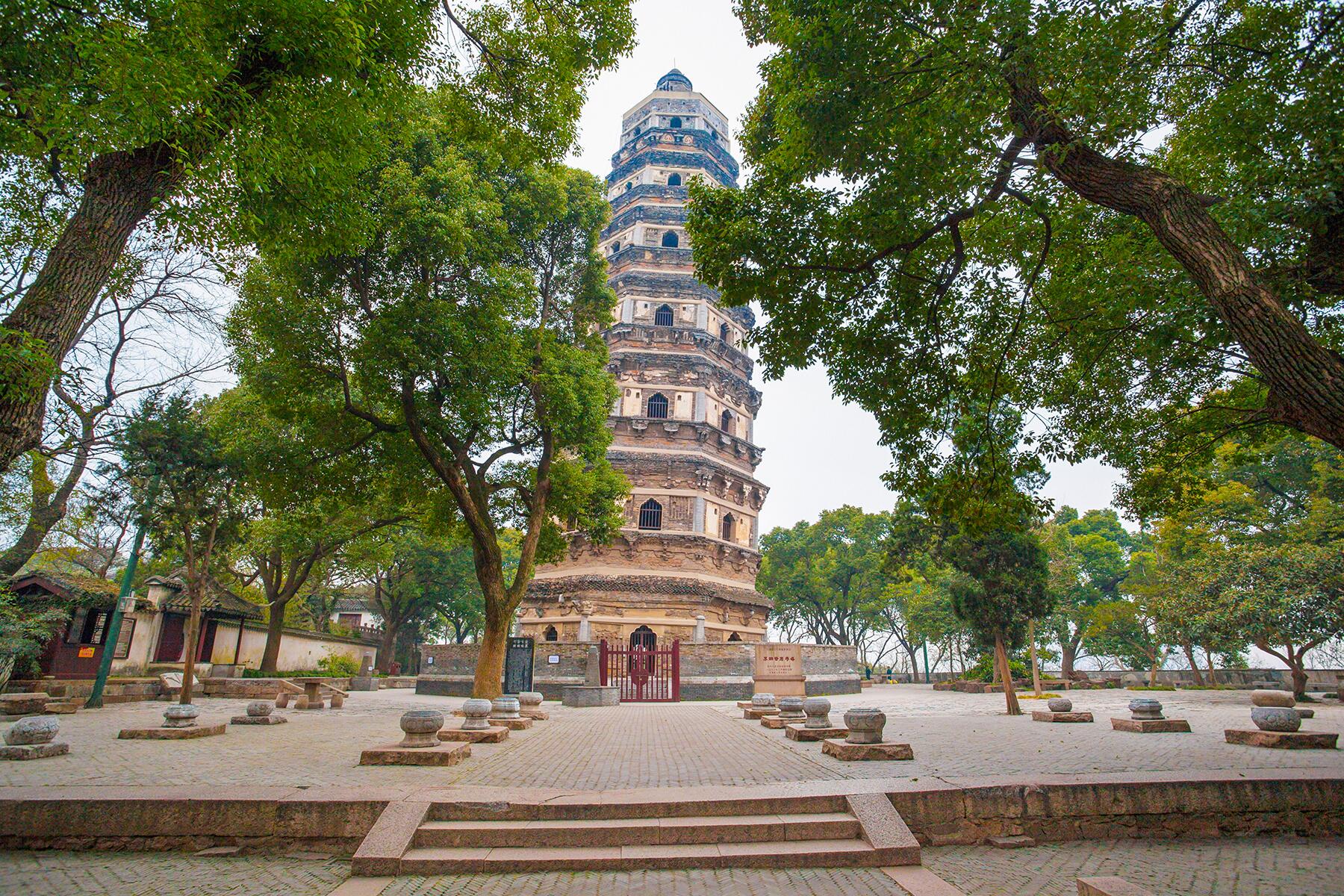 The octagonal, seven-story high Yunyan, or Tiger Hill Pagoda, has been leaning for a long time. In fact, it seems to have leaned ever since its construction between 959 to 961. The pagoda was reportedly severely damaged and carefully restored during the Ming dynasty, but that did not seem to stop the leaning. Today the pagoda is the most popular sight within the extensive temple complex, most likely because of its moniker of the Leaning Pagoda. The pagoda is thought to lean at an angle of 3.5 degrees, and the base has now been reinforced to stop it from falling over. 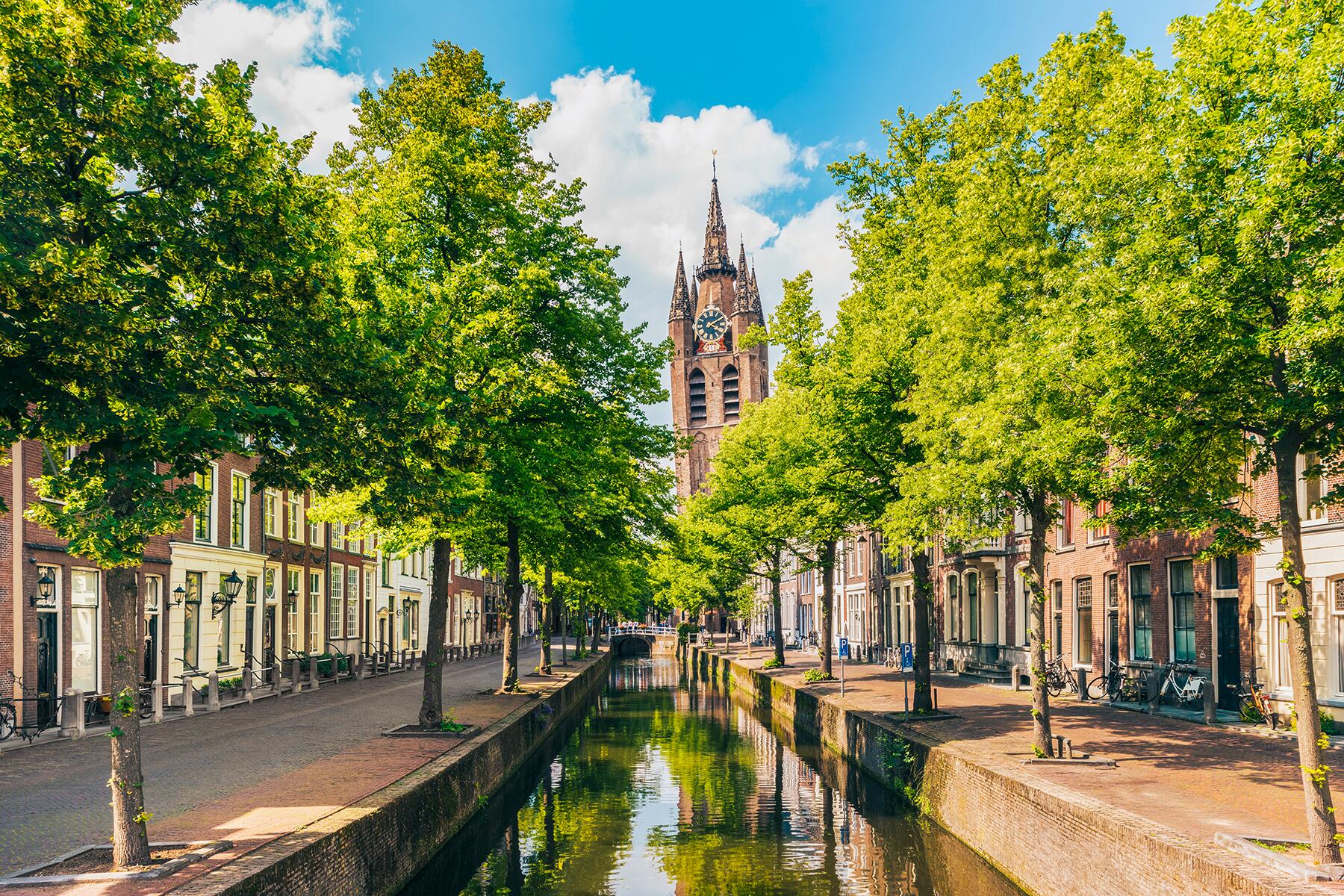 WHERE: Delft, The Netherlands

The Oude Kerk, the old church in Delft, the Dutch city famous for its blue-and-white earthenware, dates back to 1246. Its 246-foot-high leaning tower was added in 1350 and started tipping soon after completion when it became obvious that the steeple was too heavy for the soft ground by the canal it was built next to. The roughly 6.5-foot tilt has prompted locals to nickname the tower Scheve Jan (“Crooked John”). Apart from the leaning tower, visitors come to also visit the grave of famous painter Johannes Vermeer inside the church. 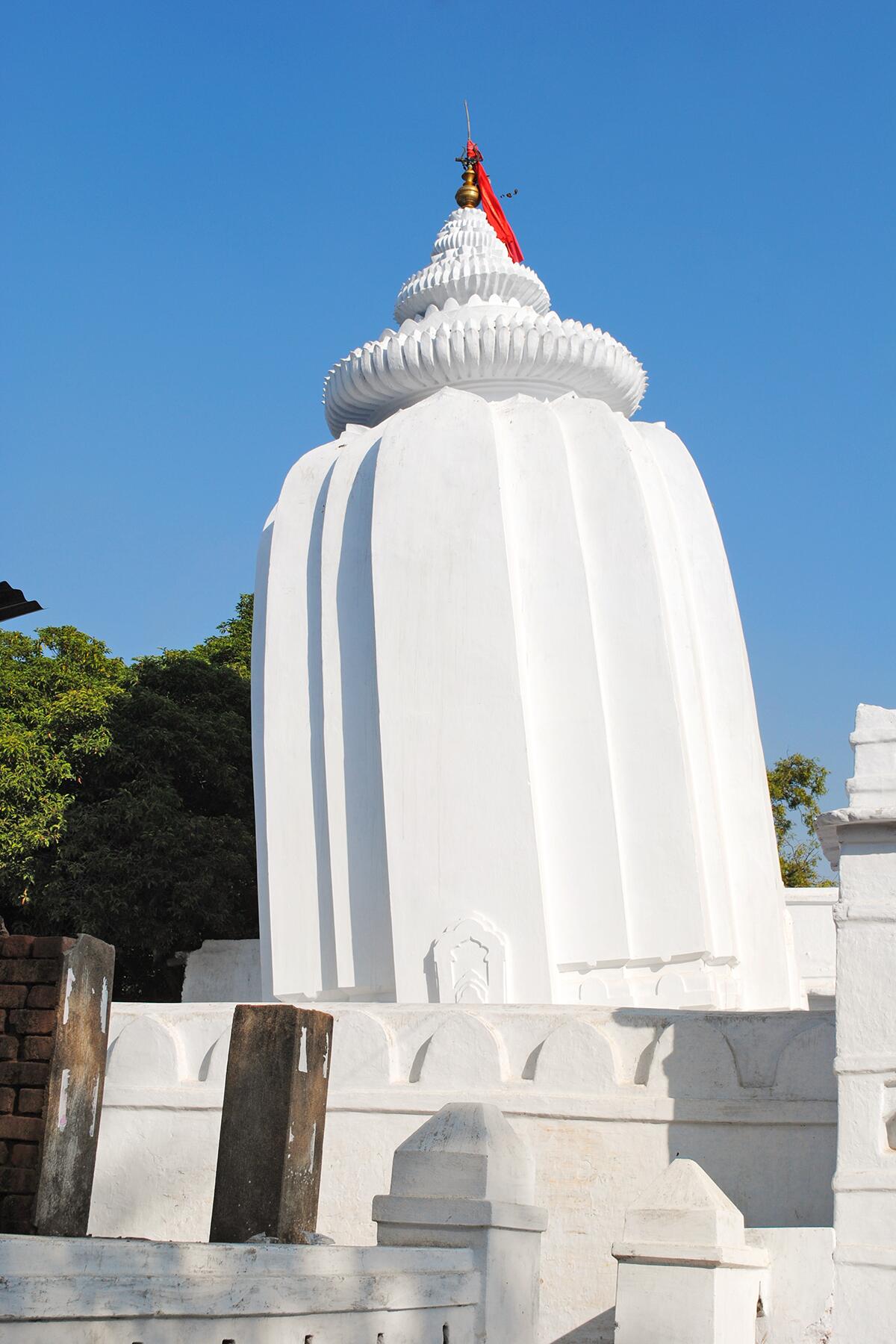 Built by King Baliar Singhin in the 17th century and dedicated to Lord Shiva, this temple’s tilt seems to be shrouded in mystery. Not only does there not appear to be any reason for it, but the angle of tilt has not increased over the years. Add to that the fact that the temple is leaning determinedly toward the north-east of the religious complex, while some of the other structures on the compound seem to have a slight tendency to lean in the opposite direction; it’s a mystery that attracts worshippers and tourists alike. 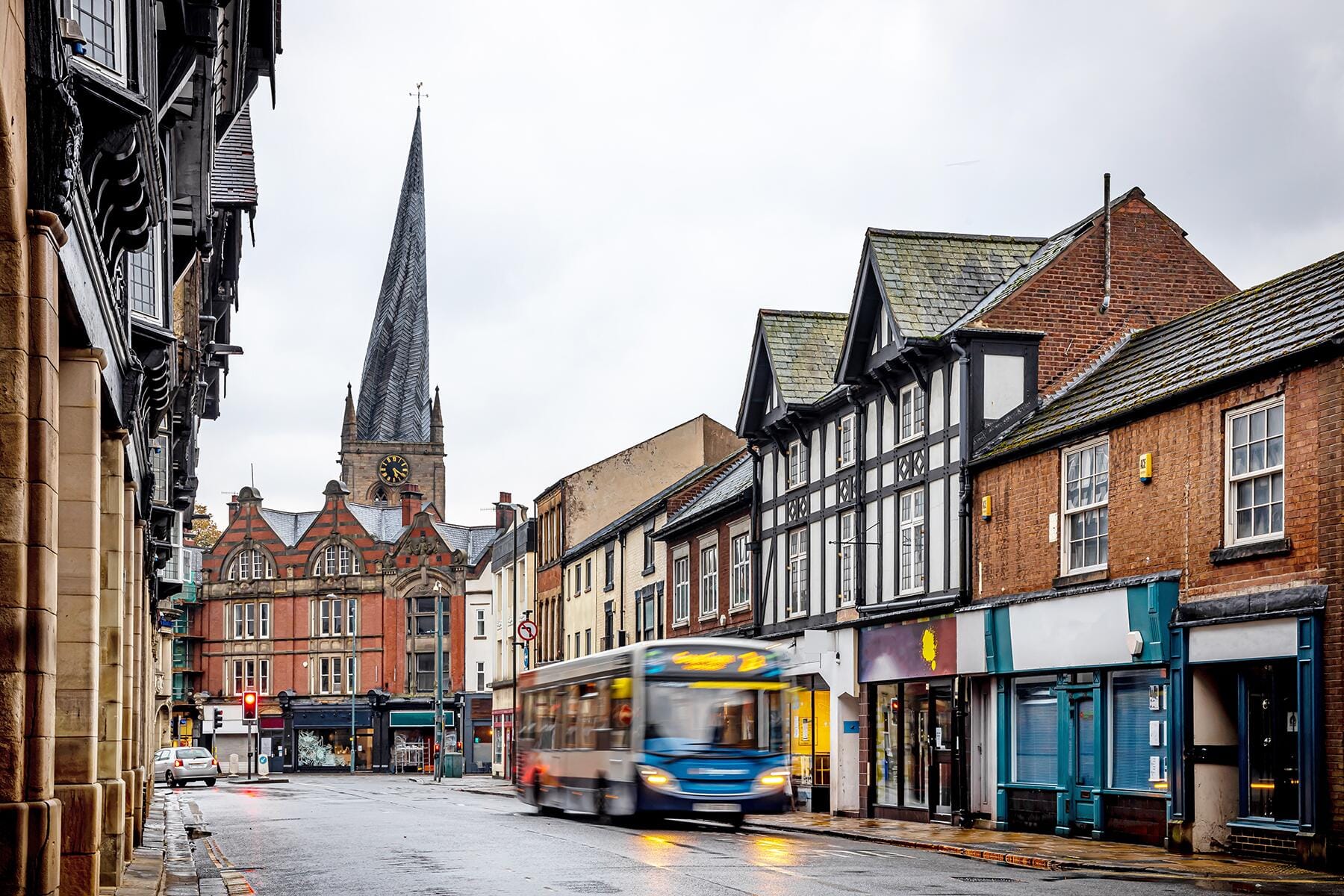 Completed in 1360, the parish church of St Mary and All Saints offers quite a sight to visitors. Atypical for structures like this, it’s not the entire bell tower that leans, but only the spire on top of the tower. However, the spire leans at a somewhat worrying 9-feet-5-inches and is also completely twisted. The reason behind this is the 32 tons of lead tiles that have been used to cover the wood of the spire. Apparently, the builders didn’t use a cross-brace to compensate for the sheer weight of the tiles. But the tiles are still there and the spire is still standing, with a certain quirky charm. 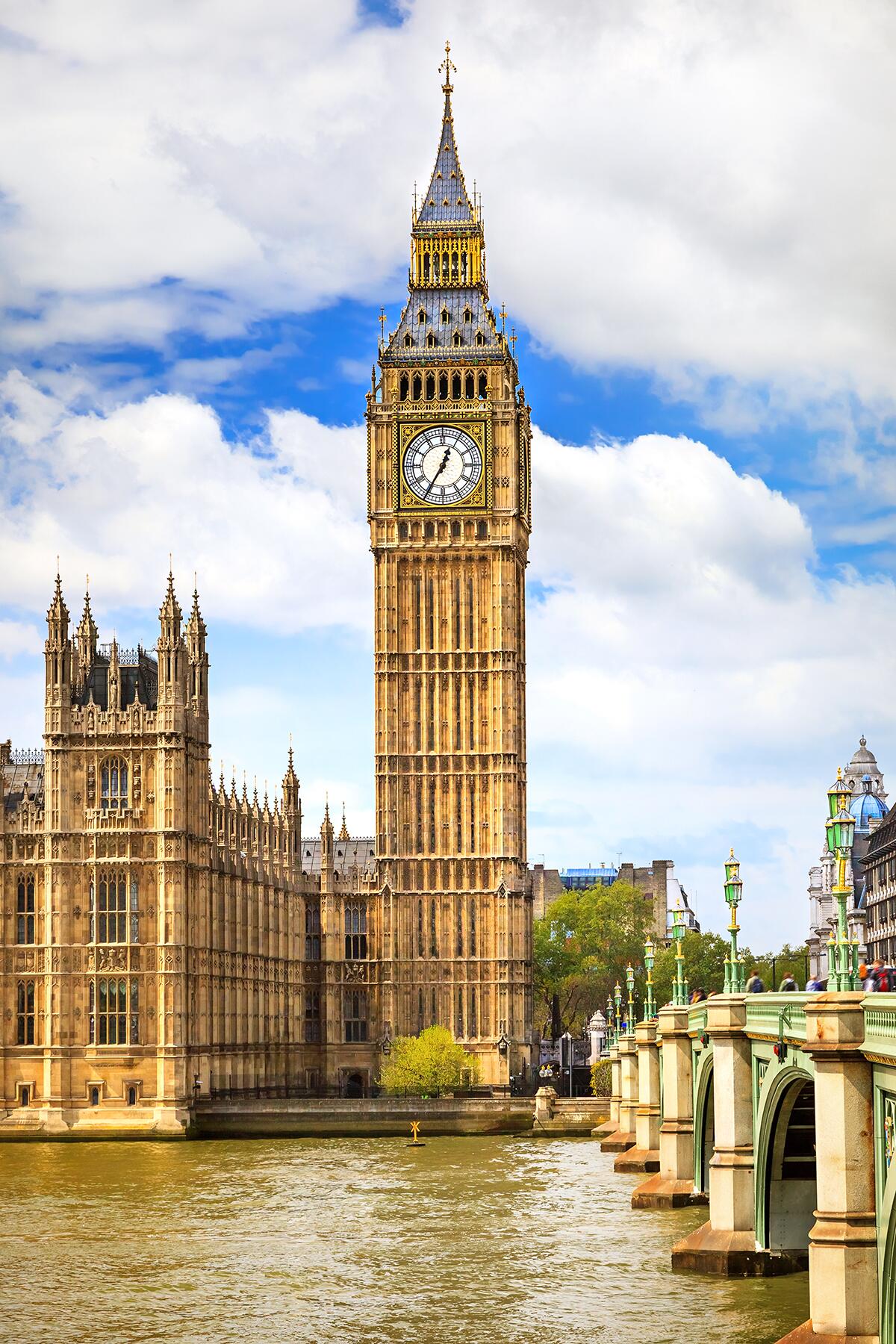 The Elizabeth Tower, the bell tower of the Palace of Westminster, mistakenly but commonly called after its large bell Big Ben, has its picture taken more than any other London landmark. But, if you look closely at the pictures, they always seem a little off-kilter. Big Ben might not be the Tower of Pisa, but the tower leans measurably to the northwest. It’s a slight 0.26 degree, one-sixteenth of the Tower of Pisa’s angle, but still worth mentioning. It does increase its tilt ever so slightly, but sources say that it will not be in any danger of toppling over for another 1,000 years or so. 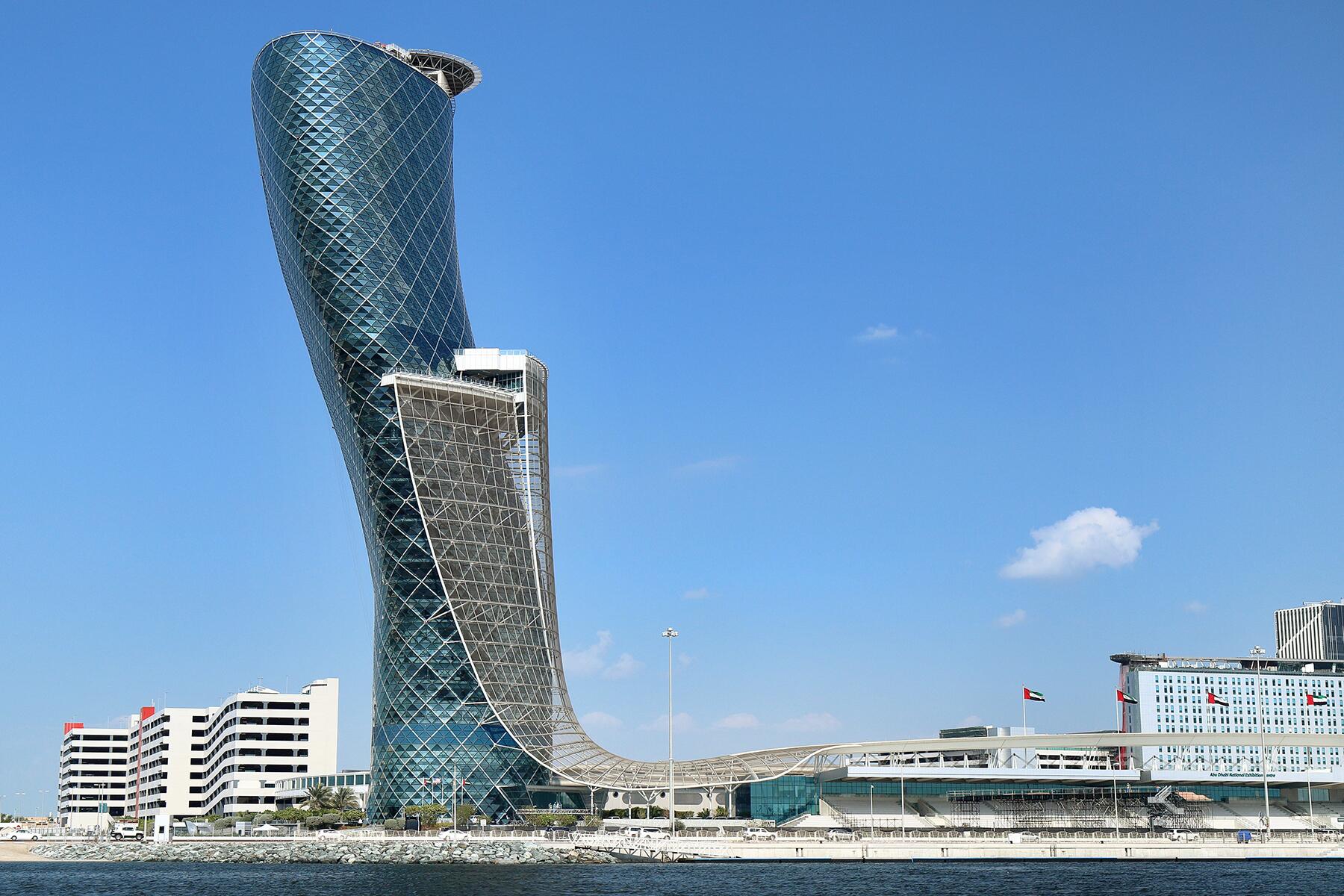 The world record of Farthest Leaning Building was once held by the Leaning Tower of Suurhusen, but in 2010, this modern skyscraper took the top spot. Unlike most of the other structures on this list, it was designed to lean, which sort of happened for various reasons (though, it is still impressive!). This quite organic-looking building reaches a height of 520 feet and leans at an impressive 18 degrees. And in this case, there is no need to worry about it toppling, as, reportedly, it is stabilized by the world’s first “pre-cambered core,” which includes a huge amount of concrete reinforced with steel, as well as 490 piles drilled nearly 100 feet into the earth. 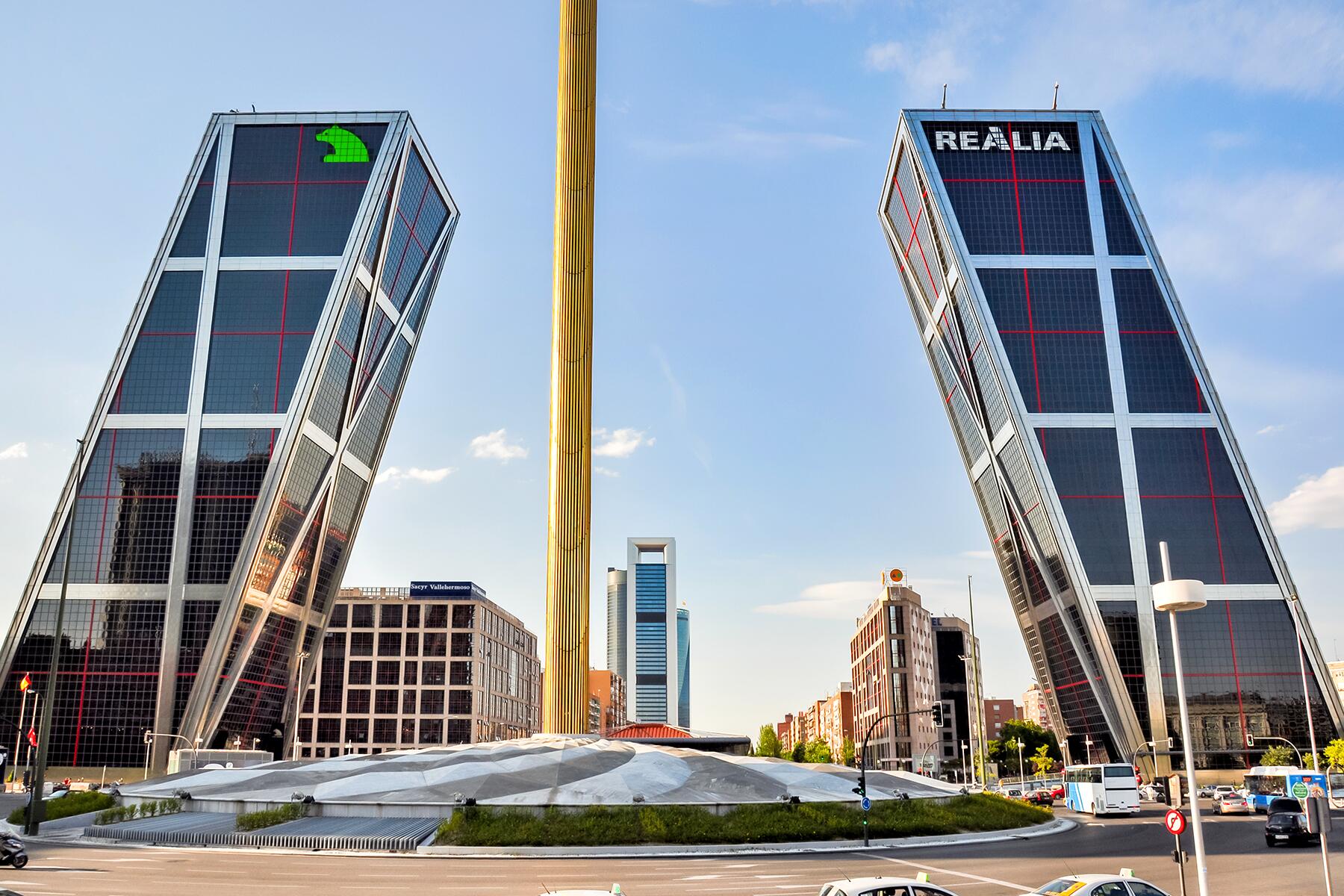 Two for the price of one in this case of modern leaning towers can be found in Madrid. The Gate of Europe, twin office towers, each reach 373 feet high and angle toward each other at a notable 15-degrees, forming the titular gate. Built in 1996, they surely would have taken the title of the world’s most leaning man-made structure from the Suurhusen church, before the Capital Gate Tower in Abu Dhabi came along, but there seems no record of it ever attempting to claim the title. Still, these towers are rather impressive and very photogenic.