Explore the continued legacy of the programs that helped lift America out of the Great Depression.

When the United States was reeling from the Great Depression of the 1930s, President Franklin Roosevelt put forth a series of federally funded programs, reforms, and policies tasked with putting the country on the road to recovery. Some of the most visible legacies are the places and works of art that wouldn’t have existed without funding from agencies that were created to provide skilled workers and artisans with employment. These projects not only helped mitigate the Great Depression, but they continue to be important parts of the country’s communities and infrastructure almost 100 years later. 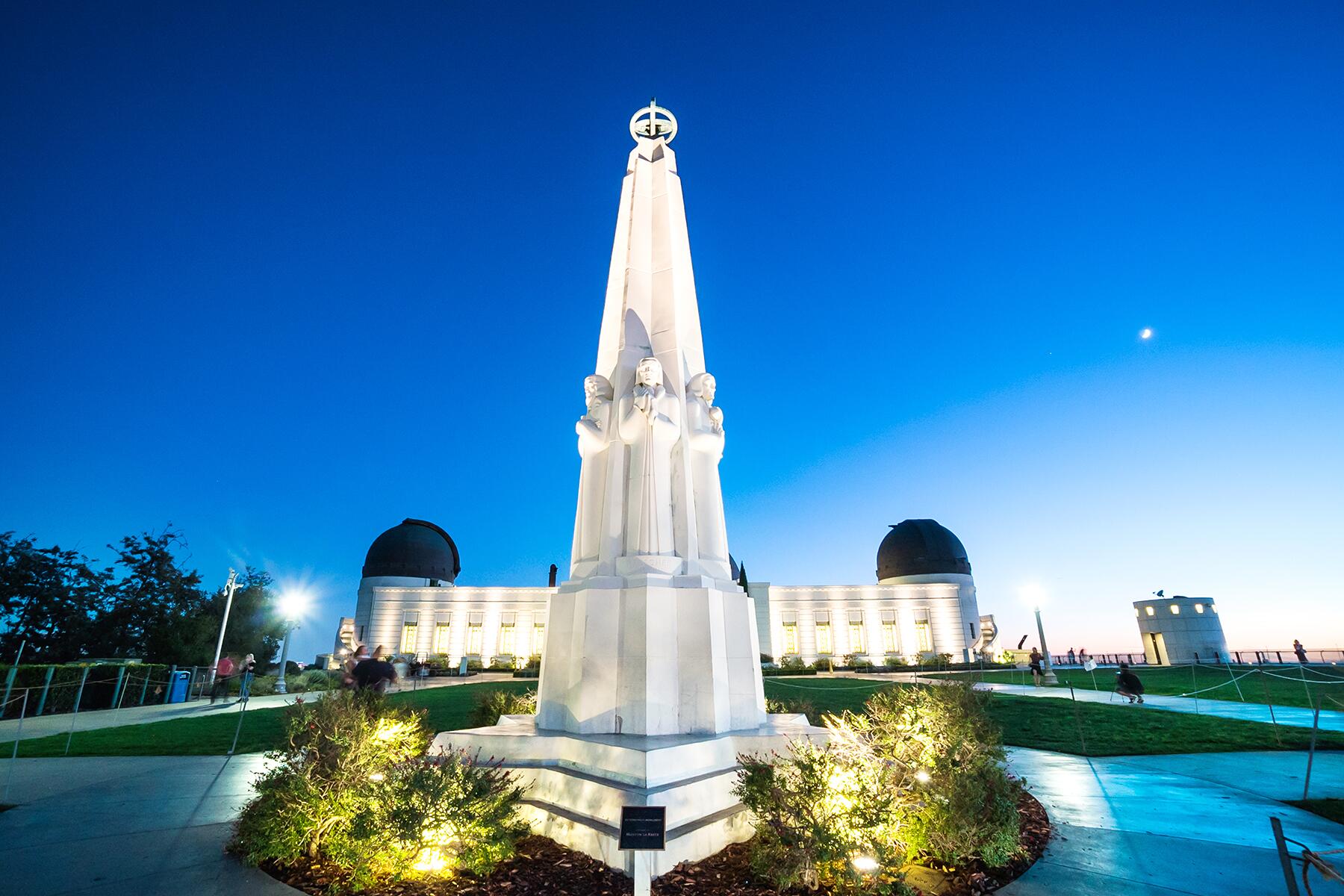 Upon arriving at Los Angeles’ Griffith Observatory, visitors are greeted by a striking, concrete statue. Surrounding the base are the visages of six important astronomers—Hipparchus, Nicholas Copernicus, Galileo Galilei, Johannes Kepler, Isaac Newton, and William Herschel. (Albert Einstein was almost among the featured astronomers but it was ultimately decided that the statue shouldn’t include living figures.) The statue was commissioned by the Public Works of Art Project and was designed by L. Archibald Garner. Each of the figures was sculpted by a different artist (including Garner). 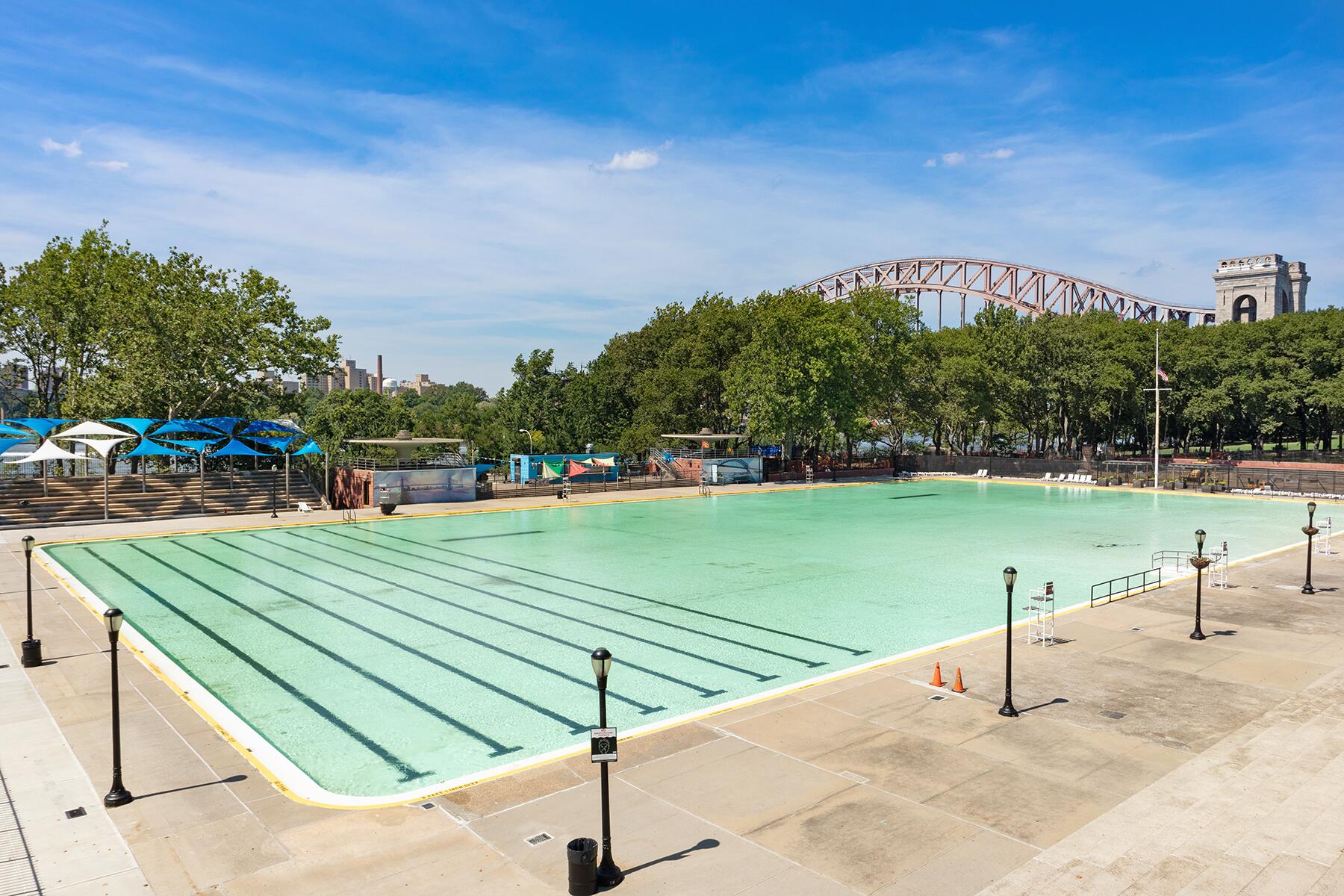 Residents of the New York borough of Queens looking to cool off on a hot summer day still find their way to this pool that came to fruition thanks to the Works Progress Administration. On July 2, 1936, the Astoria Park Pool opened to its first summer of swimmers. The Astoria Park Pool was the largest and grandest of 11 pools that the WPA opened in New York City and was even used for qualifying events for the 1936 and 1964 Olympic games. The park is also notable for its views of the Devil’s Gate and Triborough bridges. 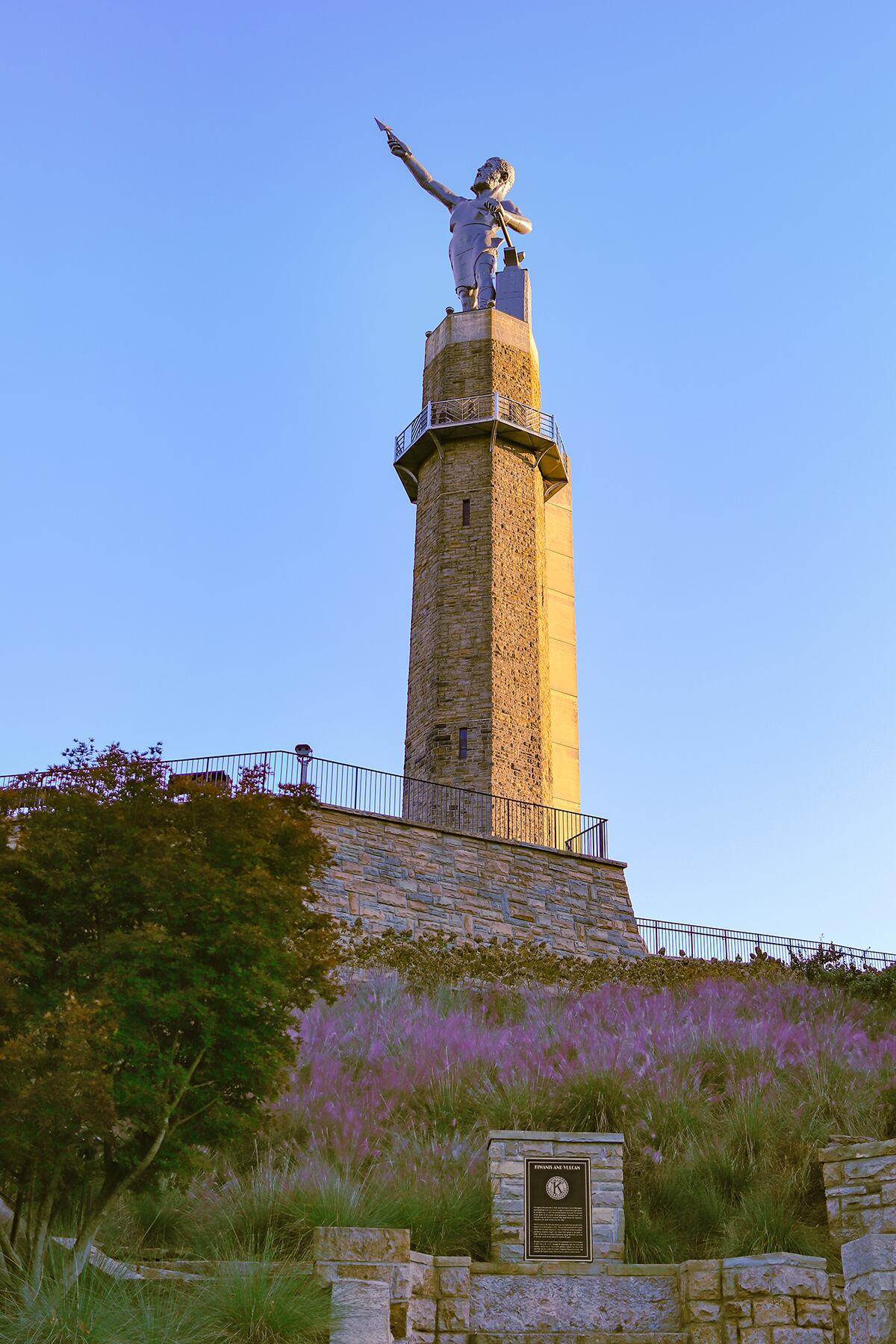 The 56-foot-tall statue of the Vulcan, the Roman god of fire, was constructed in the early 20th century, but it wouldn’t be given a home worthy of a deity until the WPA stepped in. Initially, the statue was constructed for the 1904 World’s Fair where it was anointed with a Grand Prize. But after its debut, the statue entered a rather undignified period. Over the next couple of decades, the statue would be left in pieces along the railroad tracks, reassembled without his spear so that he would be posed holding an ice cream cone or a Coca Cola aloft. Finally, in 1936, the WPA partially funded a new park where the statue was restored and reinstalled on a new pedestal. 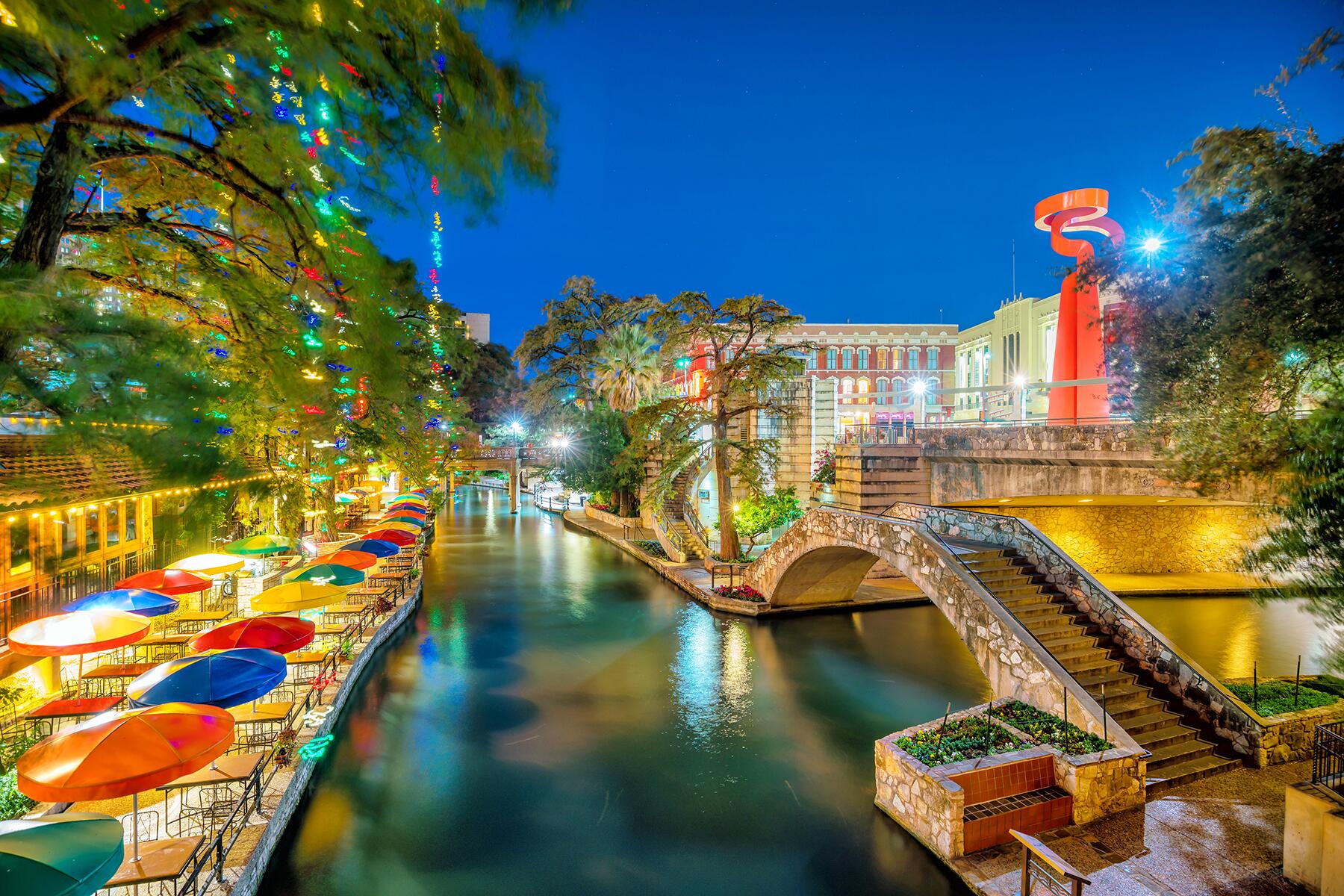 After the Alamo Mission, San Antonio’s River Walk is perhaps the city’s most famous tourist attraction. Today, the River Walk makes for a verdant place to sightsee, as well as a popular spot for shopping and dining along the riverside. But before it was a relaxed spot to while away an afternoon, the San Antonio River was notorious for its dangerous floods. And while the city had been working on flood control plans, things would officially kick into high gear when funding came from the WPA in 1939. During this period, the walkways, bridges, and plants that would become the basis of the River Walk we know today were officially established. 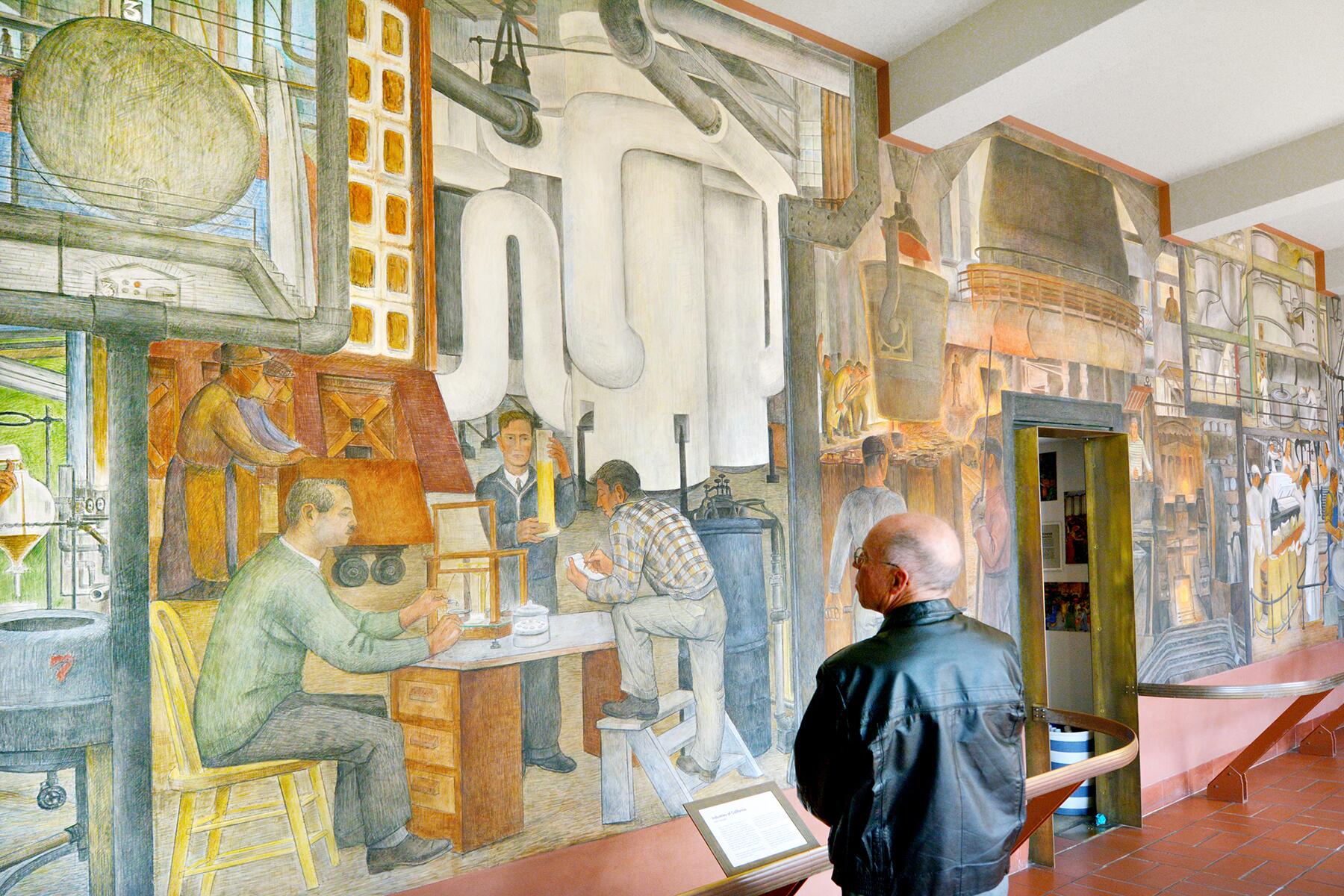 Coit Tower was completed on top of San Francisco’s Telegraph Hill in 1933 as a memorial to firefighters who had died amid five of the city’s major fires. But not long after the tower was completed, work would begin on a project that would serve as the pilot for the Public Works of Art Project. Twenty-five artists would work on murals centered on the theme of “Aspects of Life in California.” 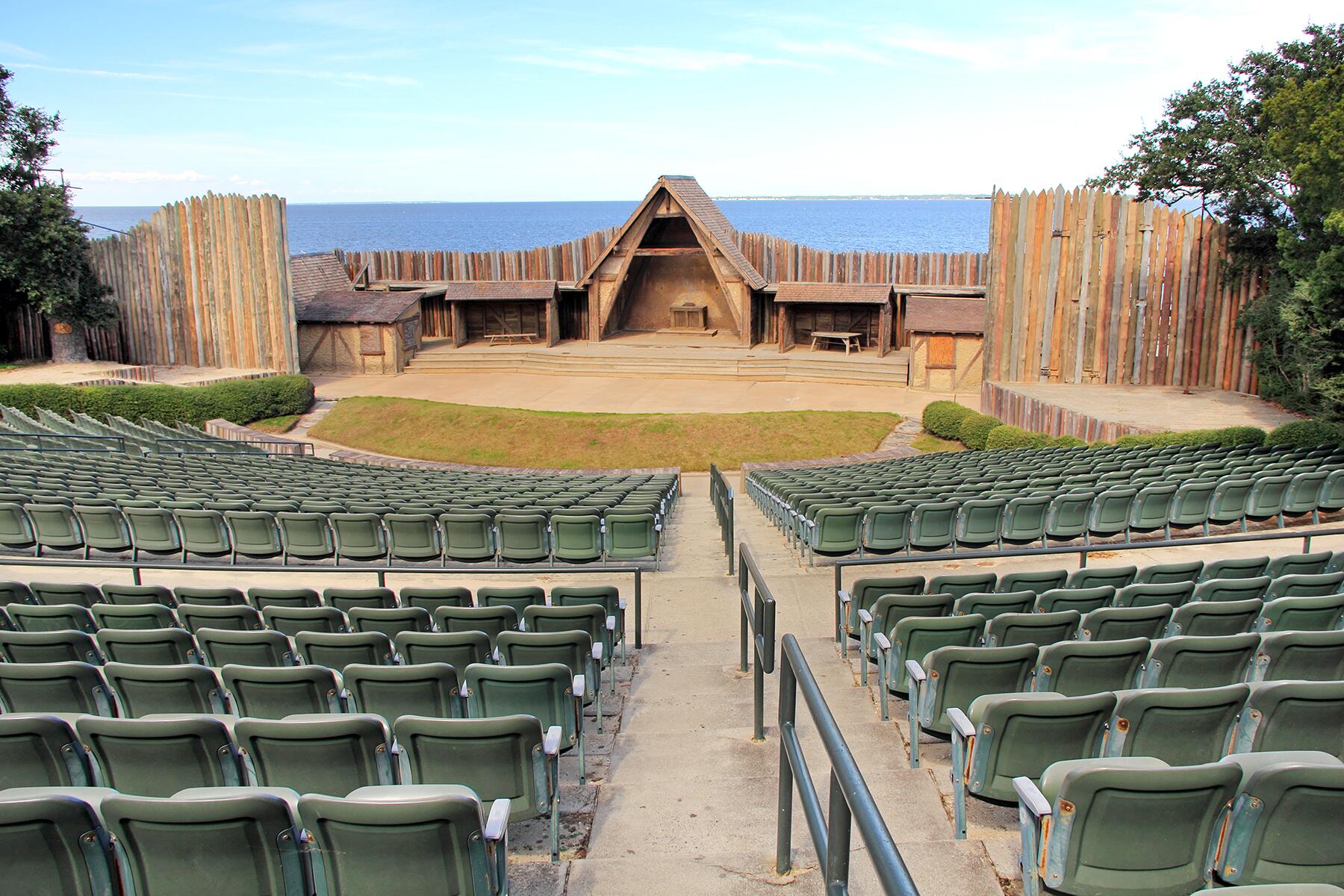 If you’re headed to Roanoke Island and hoping to catch a little live theater, we hope you like Paul Green’s The Lost Colony. This play, which dramatizes the story of the lost colony of Roanoke, has been performed at the Waterside Theater every summer since 1937 (the two exceptions being in 1944 due to World War II and 2020 due to the COVID-19 pandemic). The original outdoor amphitheater, which overlooks the water, was completed by the WPA and Civilian Conservation Corps. And the funding for the play’s 1937 first-ever staging would come from the Federal Theatre Project. 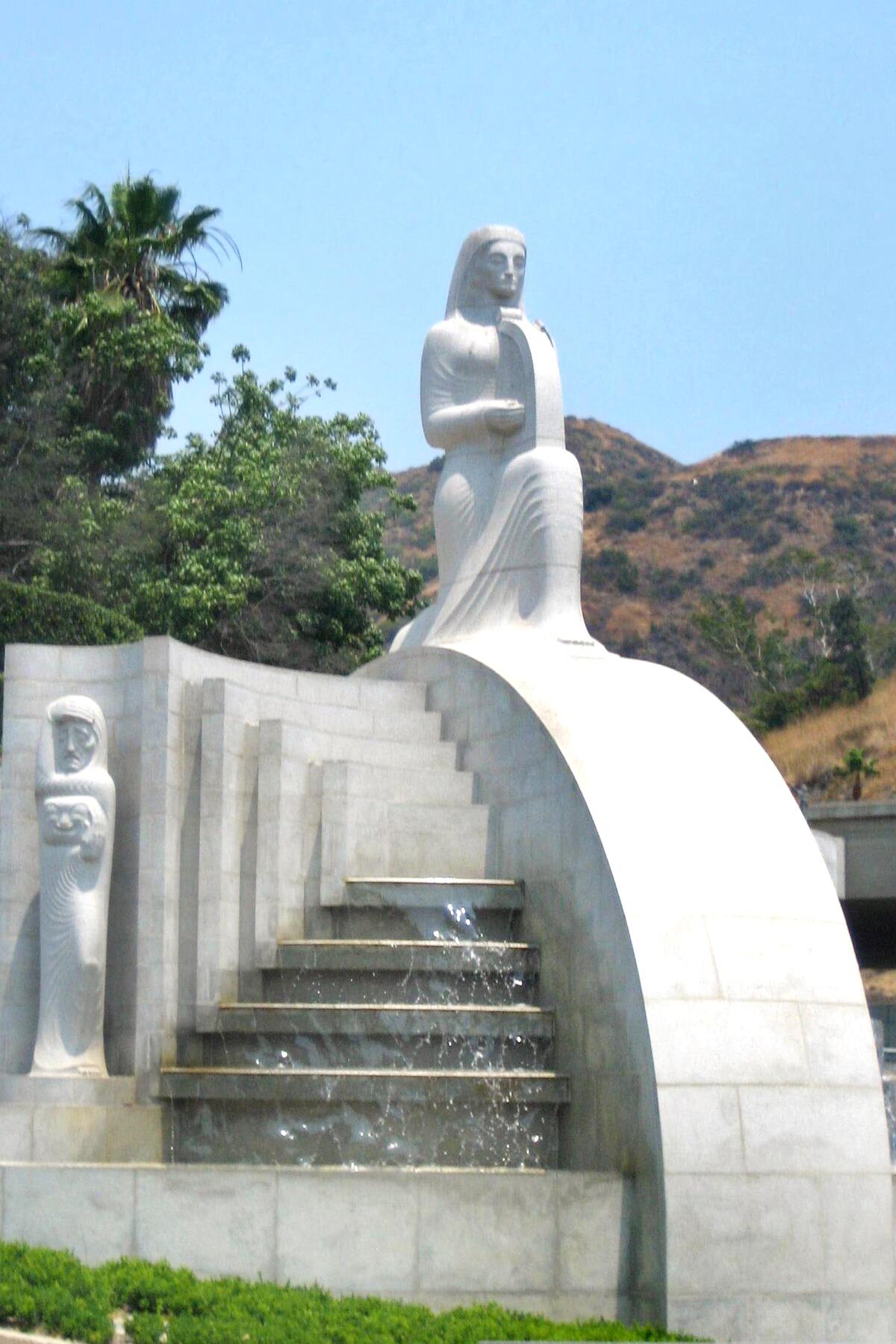 After previously working as one of the sculptors who created the figures for Griffith Observatory’s Astronomers Monument, George Stanley would go on to contribute another famous statue that welcomes visitors upon arrival at a Los Angeles landmark. Stanley’s concrete and granite fountain sculpture stands at the entrance of the Hollywood Bowl and depicts the three eponymous muses. These sculptures are regarded as some of the grandest works to come out of the Public Works of Art Project and, having been completed in 1940, one of the project’s final pieces. 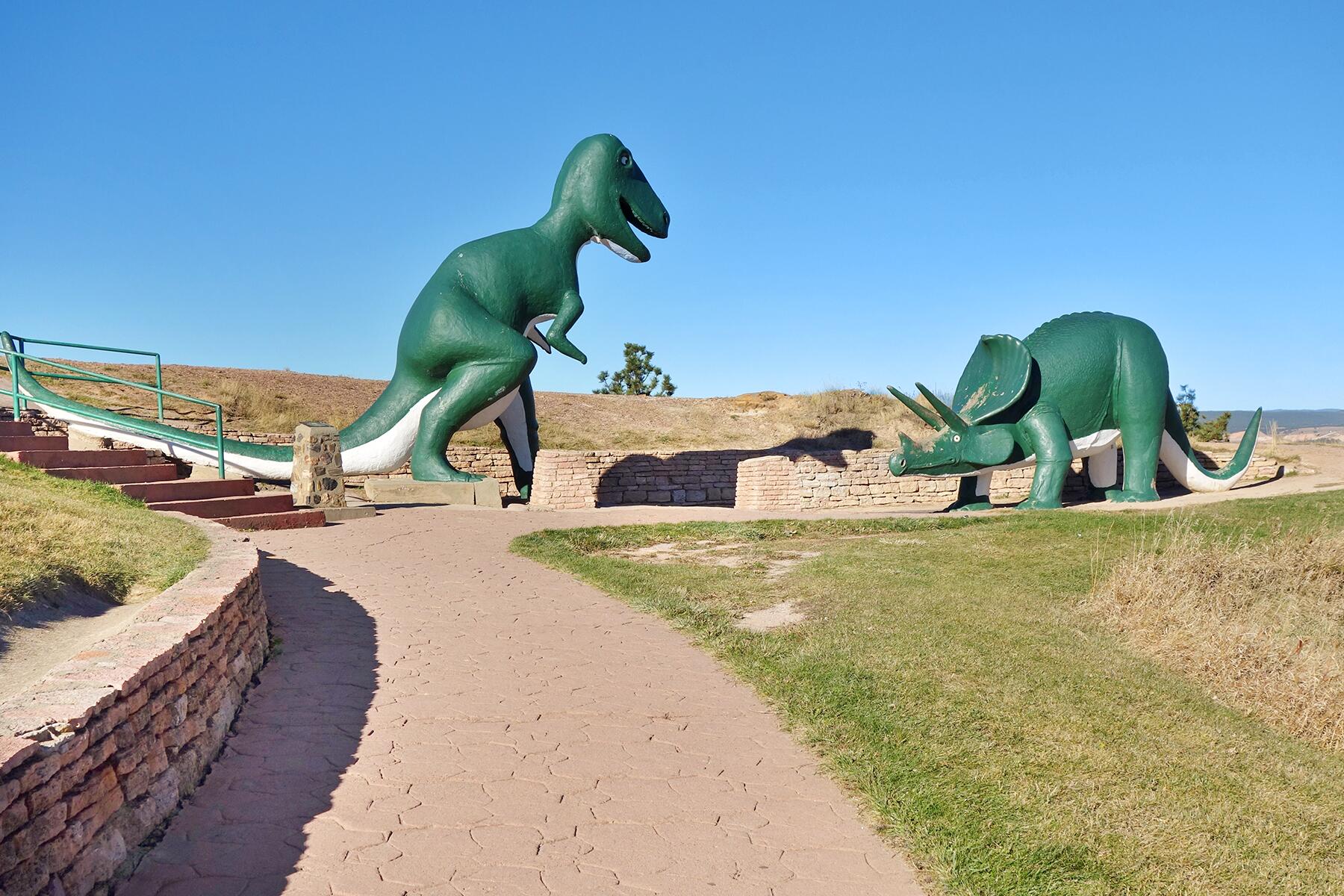 Much of the art and architecture that came out of the New Deal have an eternal dignity to them–grand landmarks and dignified visages that will ennoble those who look upon them for generations to come. But Rapid City’s Dinosaur Park proves that there should always be some room left for whimsy. This park, which overlooks the city, was dedicated in 1936 and features five dinosaur statues designed by Emmet Sullivan as well as two sculptures that were added later on. 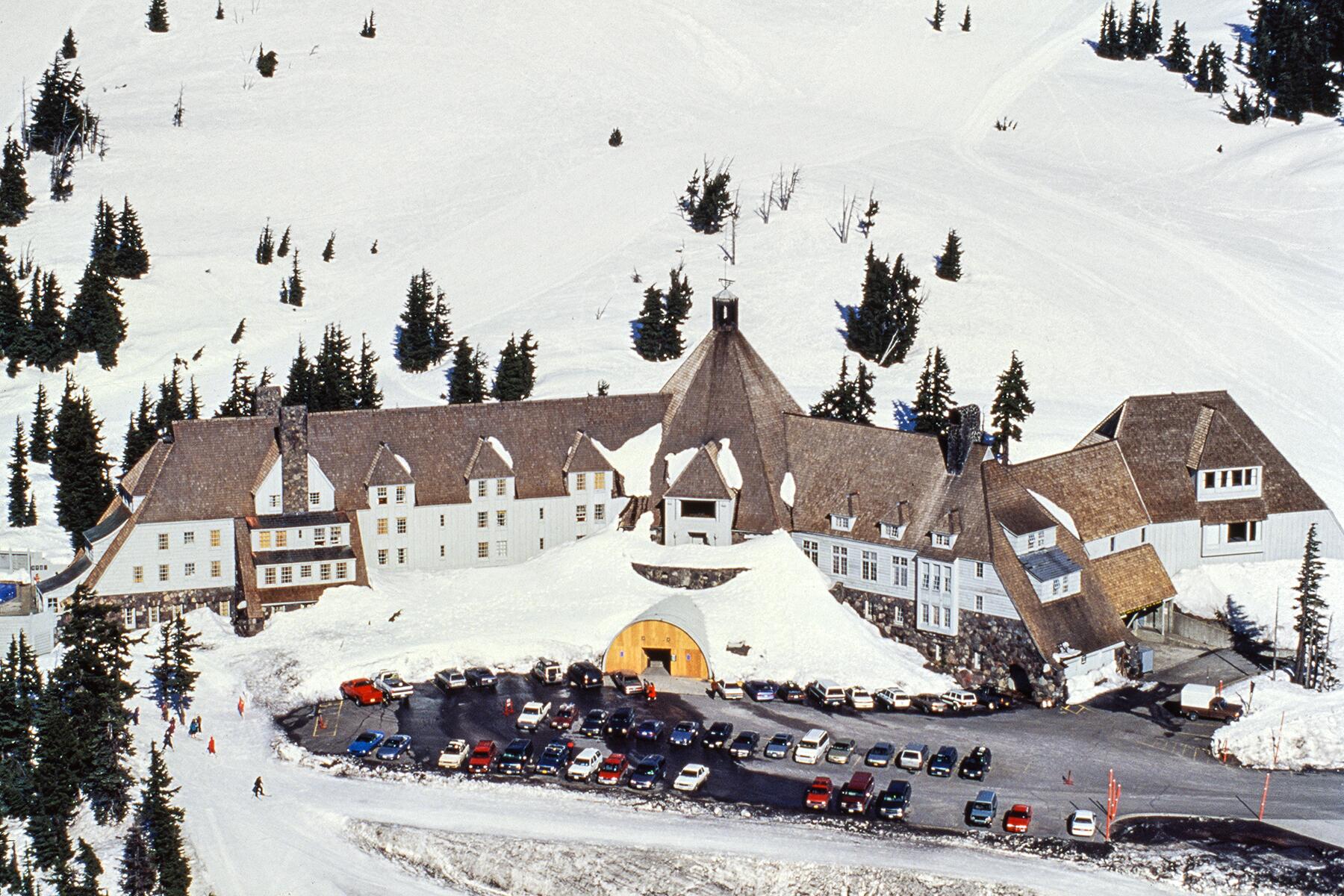 Located in the Mount Hood National Forest, this lodge is considered to be one of the WPA’s greatest accomplishments. Franklin Roosevelt himself dedicated the lodge in 1937. Part of what makes the lodge so remarkable isn’t just how well it serves its function, it’s also because of how beautiful it is. This aesthetic achievement comes thanks to the Federal Arts Project, which made it possible for skilled artisans to create incredible textiles, carvings, mosaics, and other artistic flourishes that make this structure a true masterpiece. 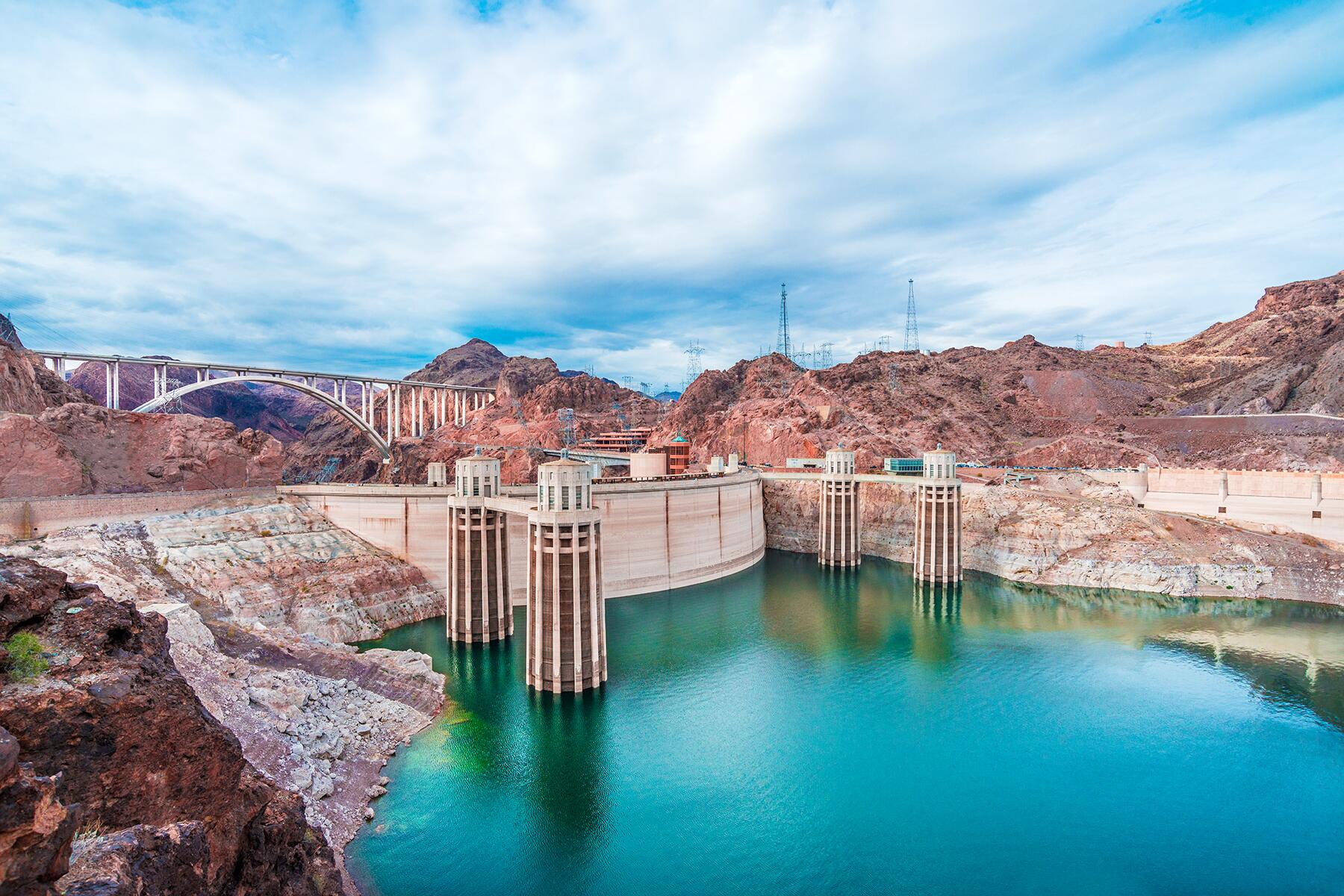 The Hoover Dam started construction in 1931 thanks to the Boulder Canyon Project Act but would be completed thanks to the Public Works Administration and the Bureau of Reclamation. This massive concrete dam would be the first of its kind and the largest in the world at the time of its completion. The dam has successfully acted as flood control, aided with irrigation, and provided hydroelectric power for almost a century.