One of the best ways to travel the globe in style is to be the President of the United States.

During his eight years in the Oval Office, Barak Obama visited 58 countries and stayed in some of the world’s best hotels. Though he started most of his days the way many business travelers do, by working out in the hotel gym (actress Margot Robbie had an embarrassing run-in with him at a hotel gym in Tahiti where she was honeymooning), he also got private helipads, presidential suites opened especially for him, and bathtub views of the most beautiful cities on Earth. Below is a sampling of hotels that have served as Obama crash pads.

WHERE: Port of Spain, Trinidad

In April 2009, when Trinidad and Tobago hosted the fifth Summit of the Americas, an annual meeting of the leaders of North American, Central American, and South American countries, Obama’s speech centered on the importance of repairing long-damaged relations between the U.S. and the other countries in attendance. About the Nicaraguan president, he joked, “I’m grateful that President Ortega didn’t blame me for things that happened when I was three months old.” He went on to say, “I didn’t come here to debate the past – I came here to deal with the future.”

Just weeks after Obama’s stay, Hilton Trinidad and Conference Center rolled out a “Live Like the President” package: For upwards of $1,200 a night, guests could stay in the Presidential Suite, get limo service to and from the airport, eat the breakfast that Obama ate, and enjoy a candle-lit dinner for two on the terrace where Obama hosted a press conference.

One of Obama’s orders of business when he visited Shanghai in November 2009 was to condemn the Chinese government’s Internet censorship policies. In response to an audience question about the freedom to use Twitter, Obama began, “Well, first of all, let me say that I have never used Twitter.” But he went on to extol the virtues of a free Internet: “because in the United States, information is free, and I have a lot of critics in the United States who can say all kinds of things about me, I actually think that that makes our democracy stronger and it makes me a better leader because it forces me to hear opinions that I don’t want to hear. It forces me to examine what I’m doing on a day-to-day basis to see, am I really doing the very best that I could be doing for the people of the United States?”

The Portman Ritz-Carlton, located on the Nanjing Xi Lu, a great street for strolling and people-watching, is about as luxurious as it sounds: You can gaze at the Shanghai skyline while soaking in your giant bathtub.

Obama hadn’t been President for even a year when he was awarded the Nobel Peace Prize in Oslo in December 2009. In his acceptance speech, he acknowledged how humbled he was by the honor, calling his own accomplishments “slight.”

Later that night, a parade marched on the street outside of the Grand Hotel, lighting the dark with torches. From the Grand Hotel, which opened in 1874 and has historically hosted the Nobel Peace Prize winners, Mr. and Mrs. Obama stepped out onto their balcony to wave to the approximately 10,000 people who had gathered. They stayed in the “Nobel Suite,” 764 square feet with its own living room. 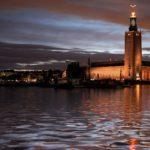 Taj Mahal Palace opened its new thirteen-room presidential suite specially for POTUS and the First Lady in November 2010, two years after the Mumbai attacks: In November 2008, the terrorist organization Lashkar-e-Taiba from Pakistan carried out a series of deadly attacks all over Mumbai, leaving 164 people dead and 308 injured. At Taj Mahal Palace, a symbol of great wealth in the region, terrorists bombed the restaurant, the elevator, and the lobby, and took hundreds of hostages. Two years later, an item on Obama’s agenda during his trip to Mumbai was to condemn international terrorism. But his visit included lighter moments, too, like when Mr. and Mrs. Obama danced with Indian school children.

Obama’s March 2013 trip to Israel was controversial for a number of reasons, including widespread mistrust of Obama among Israelis and Prime Minister Benjamin Netanyahu’s support of Mitt Romney in the 2012 election. But when he stepped off of Air Force One, Obama told Netanyahu and President Shimon Peres, who were waiting to greet him, “I see this visit as an opportunity to reaffirm the unbreakable bonds between our nations.” He stayed at the five-star King David, a fixture in Jerusalem since 1931, 17 years before Israel became a state, and engaged in talks with Netanyahu about the Iran nuclear program, Syria, and Israeli-Palestinian relations. When he spoke before an audience in Jerusalem on March 21, he had his trademark good-natured response to the mixed reaction (some cheers, some boos): “I wouldn’t feel comfortable if I didn’t have at least one heckler,” he said, laughing.

In April 2015, for the first time in 50 years, the president of the United States and the president of Cuba had a face-to-face talk. It happened in Panama at the 11th Summit of the Americas. Obama and Raul Castro agreed that while their governments still had many differences, it was important that the two countries work toward a better relationship.

Obama stayed where celebrities (Joe Biden is another) often stay when visiting Panama: in Villa Bonita, part of the Westin Playa Bonita, a collection of 20 villas with a private helipad so that guests (e.g. POTUS 44) can come and go undisturbed. Villa Bonita has an extensive wine cellar for guests to enjoy and each villa comes with a butler. The Pacific Ocean view is dizzyingly gorgeous and that week a lot was going on below the surface, too: Submarines full of Secret Service had surrounded the property.

Obama created quite a stir in September 2015 when he decided to stay at Lotte New York Palace instead of the Waldorf Astoria (now closed for long-term renovations) during the United Nations general assembly. American presidents had been staying at the Waldorf Astoria for decades, and though Obama never said why he made the switch, the rumor was that it had to do with his security in the wake of Chinese cyber attacks on government databases: The Waldorf Astoria had recently been bought by Chinese investors and Washington was suspicious. Lotte New York Palace isn’t exactly a downgrade: A suite can run as high as $25,000 a night, Gossip Girl was filmed on-site (Serena, played by Blake Lively, lived there with her family), and the courtyard is home to some of the most elite events in New York City, including Fashion Week parties.

Obama went to Buenos Aires to meet with Argentinian President Mauricio Macri on March 24, 2016, the 40th anniversary of the coup that installed the military junta responsible for many of Argentina’s “Disappeared” – tens of thousands of innocent people abducted and murdered by hit squads. Obama expressed regret for the U.S.’s role in the “dirty war” and declared a new alliance with Argentina. After their stay in Buenos Aires, the Obamas made a detour to Bariloche, a mountain town in the Andes known as Little Switzerland that’s famous for its chocolate. Teddy Roosevelt was the first president to vacation in Bariloche. Eisenhower and Clinton followed suit during their respective presidencies.

From the Llao Llao, Obama, the first lady, and the first daughters trekked through Patagonia. Later, Obama sent the hotel a photo from the hike. In his enclosed thank you note, he described the natural beauty they encountered and mentioned the importance of the fight against climate change.

Obama’s European “farewell tour” in November 2016 wasn’t the first time he stayed at Hotel Adlon – it was also his choice when he was campaigning in 2008 and again in 2013. The hotel is a history nerd’s dream come true: For example, in 2002, Michael Jackson dangled his infant out one of its windows; during World War II, the hotel included a luxurious bomb shelter; and it became a military field hospital during the Battle of Berlin. During his last stay, Obama dined at Adlon’s on-site gourmet restaurant, Lorenz Adlon Esszimmer, with German Chancellor Angela Merkel. He has called Merkel his “closest international partner,” despite a rocky start to their relationship early in his presidency, and a couple of blips throughout his two terms (like that time the US tapped Merkel’s phone and got caught…oops). Together, in response to the Ukraine Crisis, Obama and Merkel spearheaded an international push to impose sanctions on Russia. They also worked together closely on the refugee crisis.

Although The Waldorf-Astoria is closed for renovations, starting in 2019 you can rent a condo in this historic New York City hotel, where Obama was a frequent guest.