Maybe this is your happy place, or maybe you’re thinking, “Someone wake me from this nightmare.”

Picture yourself on a beach. The sand is sugar. It makes contact at the shoreline with polychromatic waters—a swirl of navy and turquoise that turns clear as crystal in your hands; when cruise ships glide across the horizon, soft peaks form quietly and melt into the strand. But if you take the “relax with your toes in the sand” credo with a grain of salt (or sand) and prefer to spend your vacations hyped up on caffeine, nervous as you are any other day of the year and resting only when the effects of a cocktail have lulled you into a fitful sleep, the islands still have plenty to offer you.

Perhaps you’re a traveler who’s not quite a thrill-seeker, not quite the wind-in-your-face-toes-in-the-sand kinda gal (or guy) (or neither) from commercials. Maybe you do want to experience a bougie resort at sunset, sipping the fruitiest of fruit cocktails while you nestle into a cabana and watch the sunset, but later encounter local weirdos at the diviest of dives. Maybe you want to relax seaside eventually, but first, you need to expend some actual energy. Fear not, fellow high-strung city-dweller: the Cayman Islands are a destination where such experiences are within reach. Here’s what you can do to fully experience all three islands without forgetting who you at your core. So, try and relax! But also, try to have some fun!!

Jet Ski out to Cheeseburger Reef 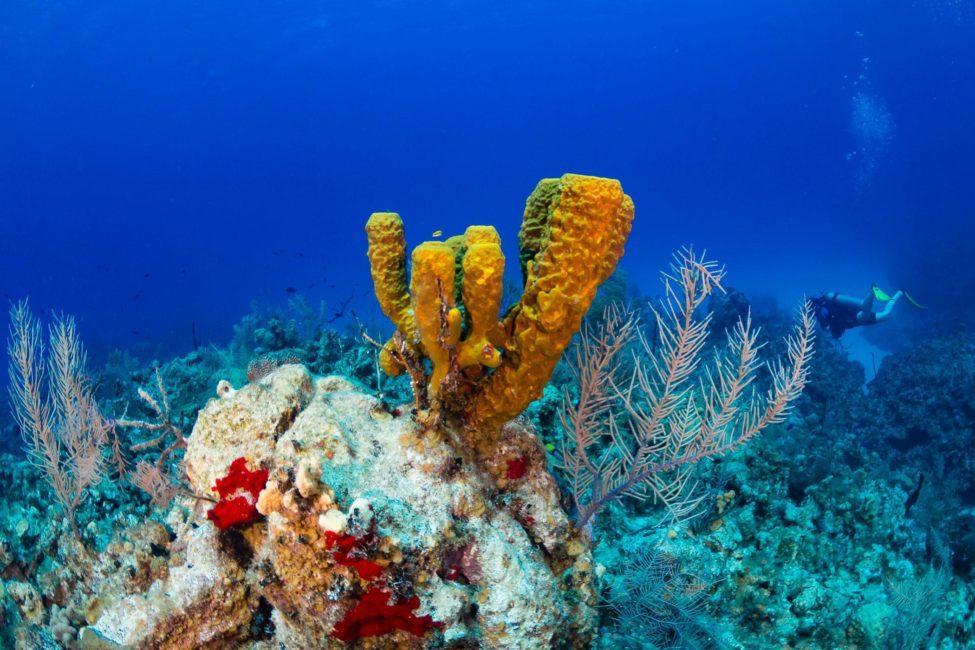 Yes, a reef named (no joke) for its proximity to a fast food chain—this we can get behind. Cheeseburger Reef in Grand Cayman is a veritable aquatic wonderland. It starts 20 yards from the shores of George Town; follow the path between the Lobster Pot Dive Center and the Burger King on the waterfront nearest the harbor, or take a guided tour with helpful folks at Red Sail Sports at the Westin Grand Cayman on Seven Mile Beach. One of the oldest reefs in Grand Cayman, you’ll spot schools of butterfly fish, slow-moving snappers, and of course, coral. Jet skis are an easy and thrilling way to get far out into the turquoise waters (take it from a beginner). You can skip along the mild waves and experiment with radial twists and turns, turn off the engine in the middle of Caribbean, and explore to your heart’s content.

If lying on endless stretches of white sand and soaking in the sun fuels your anxiety (what’s wrong with you?), head to the eastern tip of Cayman Brac, one of the smaller sister islands (you have to take a small propeller plane here from Grand Cayman, which can be an adventure in itself). As you make your way to the sea, the limestone bluff and the island’s namesake (brac is Gaelic for “bluff”) will enter your view.

Park less than half a mile from the shoreline and walk through a green patch until you find a rocky beach called Booby Point, with its slightly imposing waters that lap against the rocks with ferocity. Traverse the sharp rocks with caution, especially as you make your way to the water where stinging sea urchins gather. On a hot day, the crystalline waves are irresistible, and the view, buttressed by the bluff and uninterrupted by tourists, is breathtaking.

Hide Away in Some Caves

Seclude yourself from tourists in one of the many caves across Cayman Brac, which are dark and entrancing but small and navigable enough so you can explore on your own. Skull Cave on the northwestern side (its name comes from the openings that resemble eye sockets) is easily accessible from the road. The small outcropping has a family of bats living inside, but you can find even more of these cuties in Bat Cave across the island to the south. There’s also Rebecca’s Cave (it houses a grave for the 18-month-old child who died here during the 1932 hurricane), Peter’s Cave in the northeast part of the island, and Great Cave at the southeast end.

Fruit bats may be cute, but there’s also plenty of non-creepy wildlife throughout the islands. Hike along Lighthouse Road (the National Trust hiking trail) off Major Donald Drive through the Parrot Reserve and remember to look up: the endangered and elusive Cayman Brac parrot with its iridescent green feathers blends with the high contrast trees. You’ll see less-mercurial wildlife all over, too: blue iguanas and little lizard lads either on the side of the road or at the Queen Elizabeth II Botanical Garden on Grand Cayman.

On Cayman Brac, you can enjoy the cheapest food you’ll find anywhere on the island at Star Island restaurant. It may not be the classiest, but it gets the job done (think $2 hot dogs, $4 porridge, and refillable pour-your-own coffee). Find Mexican street cart food at Casa 43 in Grand Cayman, or enjoy all the fish & chips and Caybrew you desire seaside at Da Fish Shack. Recharge midday at Cayman Coffee Exchange at the Westin with a delicious cold brew. For dinner, nothing is cheap, especially on Grand Cayman. Even bar food at Lone Star can rack up a hefty bill. If you’re in the mood to splurge though, go all out at Beach House, also on-site at the Westin; it’s a foodie paradise, with entrees like scallops with a mushroom cappuccino sauce.

INSIDER TIPNone of the islands is particularly walkable, so renting a car is helpful (if not completely essential), especially for smaller islands like Cayman Brac. Just remember to drive on the left side of the road. Cayman Brac has signs posted as helpful reminders—and luckily not many other people will be on the road, especially during the off-season, May through November.

The island wants to sedate you until you feel you need a vacation from your vacation. Along the water is Calico Jack’s, a local’s bar where Caybrew flows freely from the taps. Sit at a picnic table by the beach to chat with friends, and don’t expect a huge crowd to join you. Friday night is the night to go out on the islands, though it’s by no means a party city. If you do feel the need to dance, though, consider Edoardo’s on Seven Mile Beach; a DJ will play everything from salsa to Fetty Wap, if you ask nicely.

In the mood for something classier? West Indies Wine Company will likely be your speed. A sommelier will pour samples of wines from all over the world. Something about tannins and earth and cardamom, stopped listening, too drunk…

When it’s time to wind down, Grand Cayman, (as opposed to the Sister Islands) is your best bet for full-on accommodations like the newly-renovated Westin Grand Cayman, which sits on the nicest part of Seven Mile Beach. Rooms with balconies look past the pools and onto the sea. It’s pricey but still affordable compared to many resorts on Grand Cayman (maybe Taylor Swift and Justin Bieber have stayed here, sources won’t officially confirm [but they have]). Grab a book from the lending library on the second floor, order from 24-hour room service, and rest your head on some crisp white linens.