Pre-coronavirus, comedians would leave urban hubs every week for gigs, driving and performing across America on what can seem like a never-ending road trip.

There is the stereotype of a lone comedian traveling from comedy club to comedy club every night to perform: lonely, drinking, living on the road. This stereotype might have some validity, as most professional comedians have to spend at least some time on the road in order to earn a living. Traveling for shows is what gets comedians paid, and for many, the travel is an added bonus–a way of seeing America every weekend.

Sam Tallent travels almost every weekend for comedy (when he isn’t writing books). He recently published Running the Light, a novel about a self-destructive road comic. While the book details the life of a comedian who turns into a ghost on the highway, Tallent doesn’t actually live that way. “I have seen more of America,” he recounts, “I have seen parts that most haven’t really seen. I value those as much as I value Manhattan or Portland or that kind of thing.”

For the past six years, Caitlin Peluffo has headed out on the road in her Ford Fiesta at least two weekends a month. Using a mix of Airbnb, couch surfing, and a recently acquired Delta Skymiles card, she has budget travel down to a science. 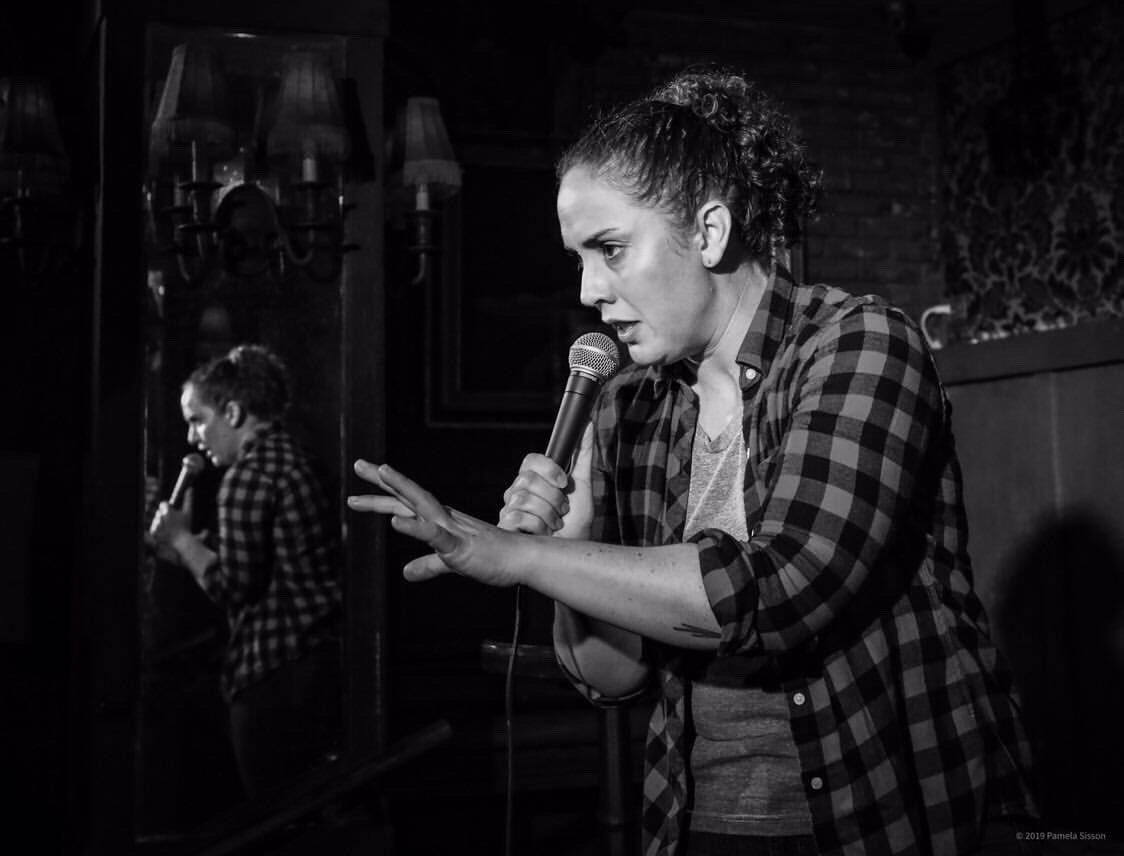 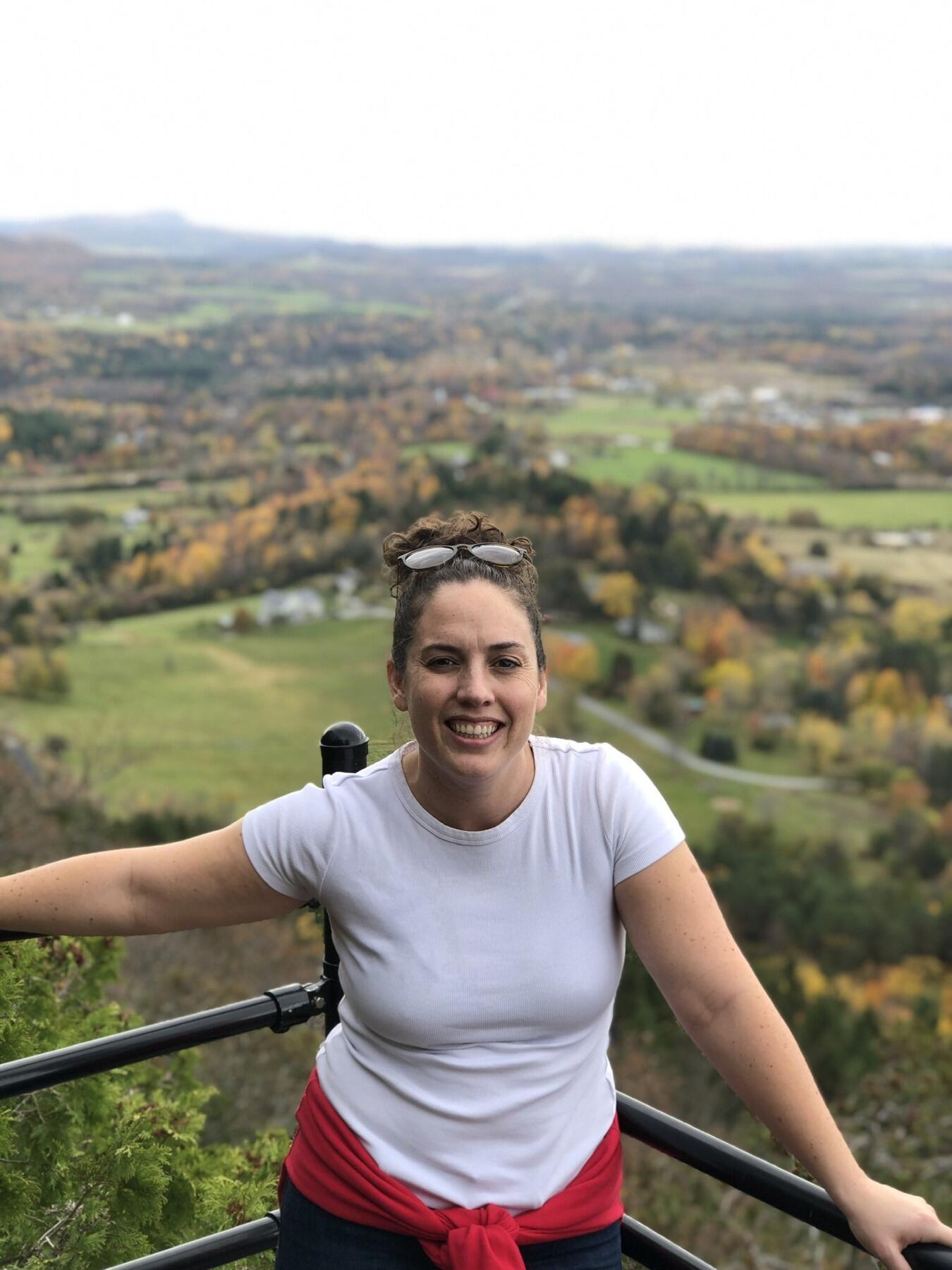 Myq Kaplan maintains a similar schedule. He splits his time between his home in New York City and the open road–that balance is important to him. He recalls only one month where it was too much travel. Between a tour as a finalist on Last Comic Standing, performing college shows, and a TV appearance, he recalls, “I only slept in my bed three nights that month.”

Being a road comedian means near-constant travel. Asking most comics where they have been sounds like a Johnny Cash song as they rattle off American cities. “Every city is a completely different meld of people,” Caitlin Peluffo says. “Take Indiana. Indianapolis is fairly liberal. You go outside of Indianapolis, it’s very conservative. You go to Bloomington, it’s a university town, so it’s extremely liberal. Within two hours of Indianapolis, you have all walks of America.” 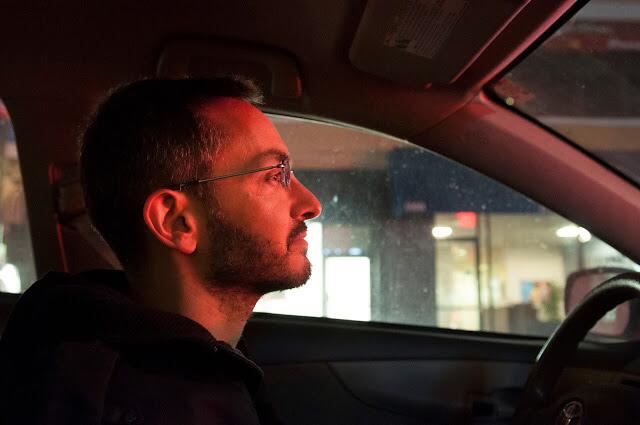 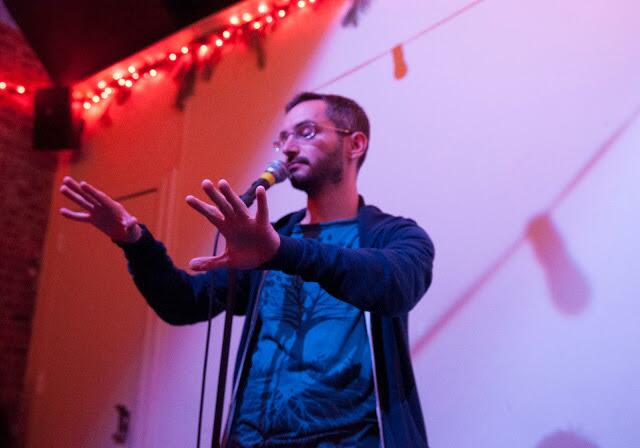 Experiencing America is a common thread when talking to road comics. “I was not surprised how conservative America shifted because of my experience on the road,” Nonye Brown-West, a comedian originally from Boston, recalls. “I saw that it was happening. You take the temperature of what is happening in America.” 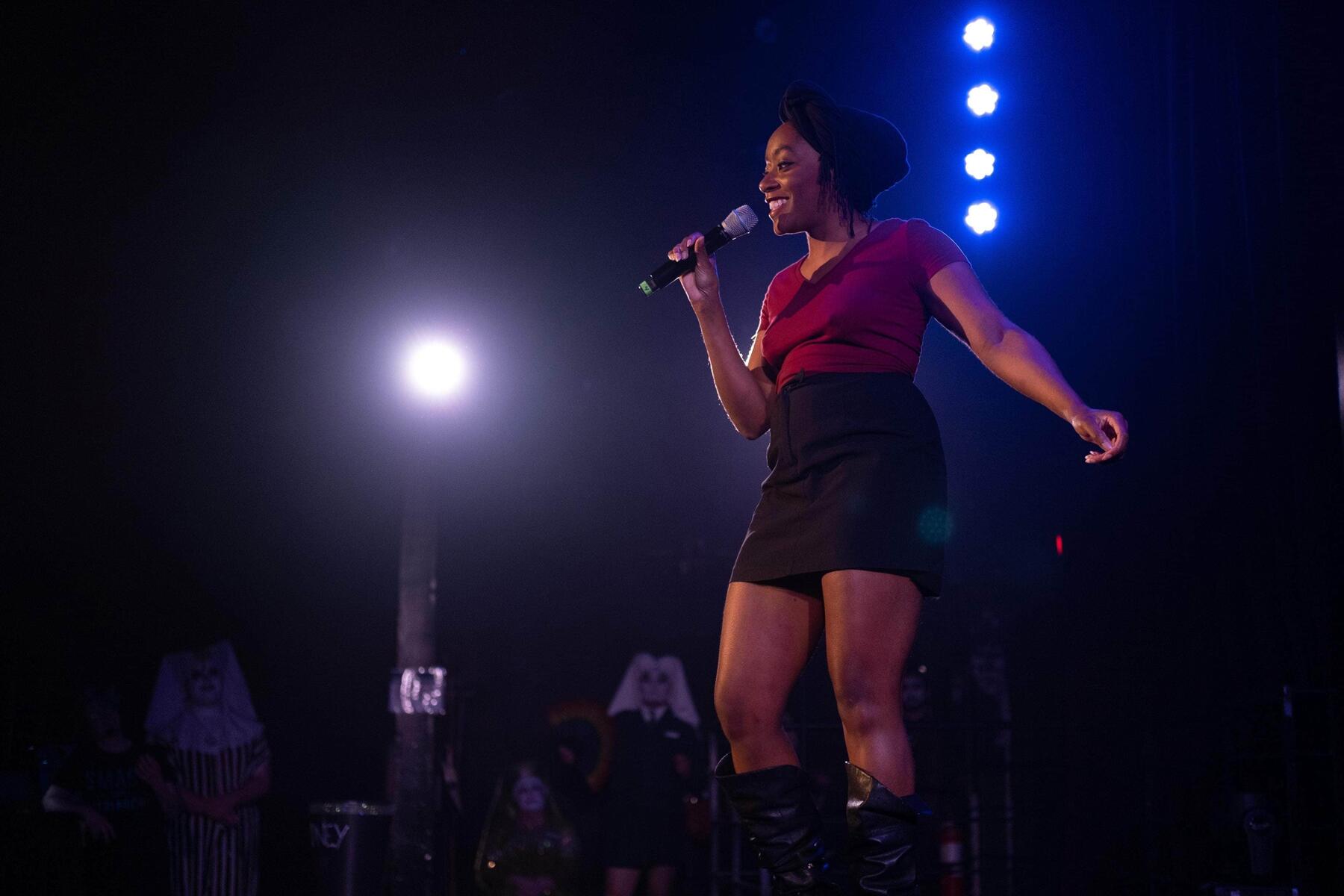 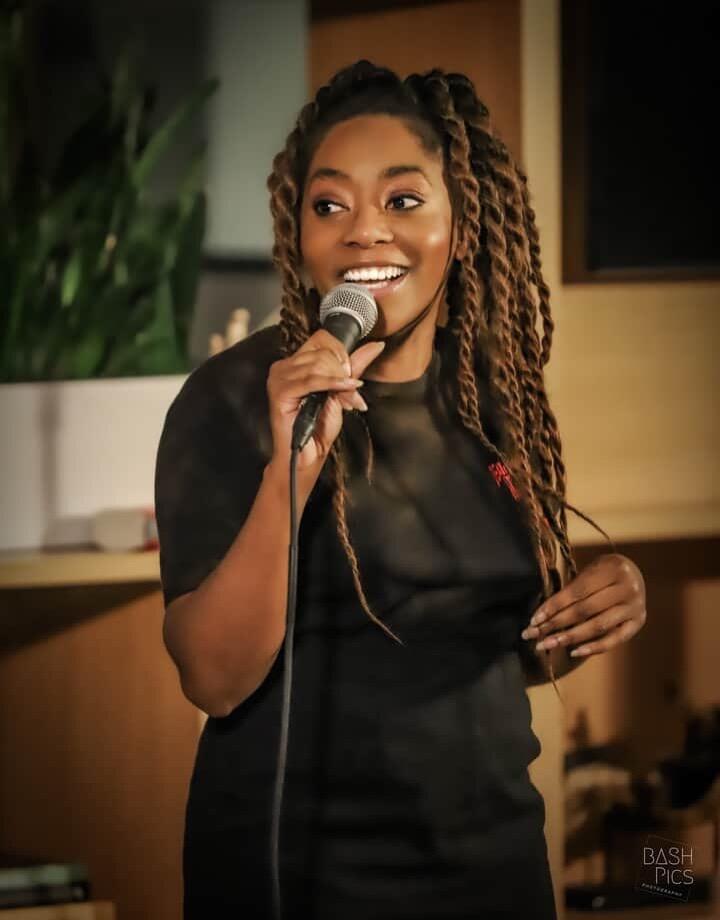 Most road comedians drive long stretches. Even those who fly to their first destination usually end up driving between cities to arrive at a new show each night. “I don’t mind the long drives, because I love being alone,” Peluffo says. This sentiment is echoed by Tallent, “I like to be alone. You have 23 hours to kill, all you are really living for is the show. The rest of the time you can just float around. I like taking the side roads, slowly making your way up. I like that freedom.”

Tallent spends most of his 23 other hours outdoors when he can; swimming in the Red River in Louisiana, hiking in the Appalachian Mountains in Tennessee, sitting on the white sand beaches of the gulf coast, watching the sunset in Shreveport. “I try to look at the world with gratitude. I pretty much love everywhere,” Tallent says. “Places only suck if you suck. If you don’t want to do the legwork to find out why Pensacola, Florida is beautiful and rewarding, you shouldn’t be able to go to Pensacola, Florida.”

Most American cities have at least one or two places that comedy shows happen. It can be a comedy club, a theater, or simply a bar with a stage. Even small towns want performers to come through. Kaplan recalls that while ago, on a trip to Fairbanks, Alaska, there was a town a couple of hours out called North Pole. “I remember this bar in what seemed like nowhere,” he says. “At the time I was doing a lot of liberal material and this was a cowboy bar if that means anything. A guy came up to me after the show and said, ‘I don’t agree with half of the things you said but I really enjoyed it. I really appreciate that you came.’”

In many small towns, comedy is a big event. Peluffo recalls driving thirteen hours to Bloomington, Indiana to open for Colin Quinn at the Limestone Comedy Festival. Later that night, all the comedians went to a small gay bar, The Back Door, for an end-of-festival party. “I spent the whole night getting trashed [and] playing giant Jenga with comedians I had never met before,” she recalls. “Everyone came out just to support this small business. They really built something amazing in Bloomington. And there I was at four in the morning dancing at a gay bar in a very red state. This is what comedy can be.”

The road can be lonely, but comedians always seem to meet people along the way. “I get to meet headliners from all over the world. I am always shocked by how humble and nice most are, and it’s good to hang out with people who are more successful than you,” Brown-West says. “Last time I was at Vermont Comedy Club, I got to open for Ms. Pat and I spent the entire day with her. We went to Lowes and got a hibachi. For me, that’s something I always look forward to.”

Kaplan similarly explains his mindset when meeting new comedians, “My goal is always to be as open and generous with my time as possible because we are all in this together.” When not meeting new faces, comedians will bring along other comic friends with them.

“If you are with people, it’s like a mini road trip,” Peluffo recalls as she talks about a trip from NYC to the Comedy Attic in Atlanta with fellow comedian Emily Winter. “We had a delightful trip to middle America. We would stop to see the sights. You see these little pockets of the country. There are only 500 people in this town, it’s adorable, and yet somehow they have a Starbucks.”

For many road comics, COVID-19 wiped their schedules clean. This way of life doesn’t work in a pandemic when live entertainment disappeared overnight. “I do feel like as a Black woman in comedy, there weren’t a lot of opportunities. I had to work a lot harder to be a road comic, and that is something I am proud to be able to call myself,” Brown-West explains. “I was very proud of being booked in all these clubs as a Black woman because it is hard for us and all of a sudden, it all went away.”

Now Brown-West throws herself into writing scripts and online shows and has taken a month hiatus to focus on supporting BLM.

“COVID has flattened the way I make money,” Peluffo admits, “It will come back. It might come back different but it will.”

Tallent has been focusing on family and treating the pandemic as forced time off. “I haven’t been able to be just a husband or a son or a friend in so long. My entire adult life has been defined by standup comedy,” he says. “While I am enjoying the time off, I make 90% of my income through live performance. When I think about it too much it is like thinking about your own death. We are all going to have to evolve.”