Exquisite and functional, the brightly-colored paper umbrellas of Asia also have the power to protect.

In a quaint village in northern Thailand, I find a unique artistic production line operating just as it’s done for 200 years. More than 20 women are executing different tasks, displaying nimble fingers and impressive creativity as they combine to make a traditional Thai umbrella. These ornate, handcrafted parasols have made Bo Sang famous across Thailand, with this community near Chiang Mai producing thousands of paper umbrellas each year.

Rarely have such umbrellas been more valued than now. For more than 1,000 years, in different cultures across Asia, parasols have been seen as shields not just against the elements but also from misfortune. They are icons of power, prosperity, and protection. Some Asian communities view parasols as guarding their owners against suffering, including in times of crisis like we currently face due to the coronavirus pandemic. 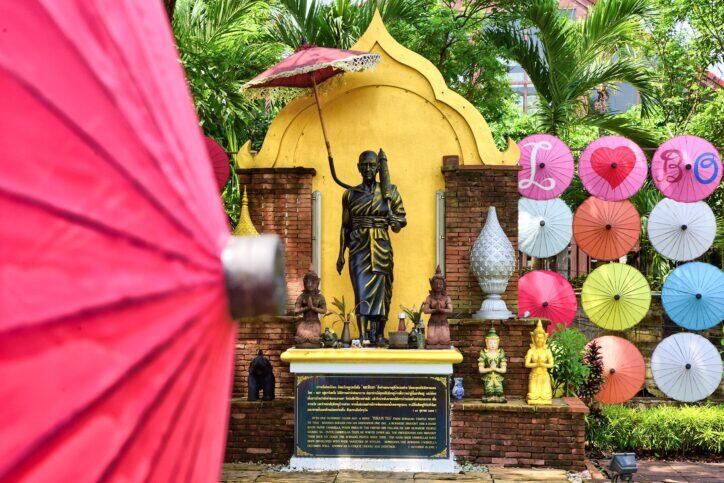 Umbrellas can be displayed in buildings in Thailand, China, Japan, and Vietnam, acting as attractive good luck charms, while in nations like India, Myanmar, Nepal, and Sri Lanka, parasols are shown in artworks as covering the heads of deities. Indian archaeologists have uncovered stone sculptures of Buddha standing beneath an umbrella that are more than 1,500 years old.

In such depictions, an umbrella is widely considered to represent the sky, which functions as a protective dome over a deity, or even an entire society. Aside from Lord Buddha, perhaps no god has stronger links to the parasol than Sitatapatra. Represented as having one, three, five, or 1,000 faces, this Buddhist deity is known as the goddess of the white parasol. Buddhists can invoke Sitatapatra to protect them from calamity or evil forces.

Not until I began researching this story did I realize Sitatapatra has been looking over me since birth.

Not until I began researching this story did I realize Sitatapatra has been looking over me since birth. When I studied online images of this deity, she looked identical to the gilded statue that has sat in my parents’ home since they were married. It was a wedding gift imported from Nepal which, until now, my mom had always thought depicted a Hindu goddess.

That was a perfectly reasonable belief given Nepal is 80% Hindu. This spectacular, mountain-laced country is also strongly linked to Buddhism though, which is its secondary religion. Lord Buddha is believed to have been born in the Lumbini Gardens of central Nepal.

This deity’s influence spread from Nepal throughout Asia. In Japan, where umbrellas are key to traditional wedding rituals, Shinto was the national religion before Buddhism arrived there nearly 1,500 years ago. Now Japan has two dominant religions, with many Japanese people adhering to both Shinto and Buddhism.

It was while exploring the stunning Korakuen classical garden in Okayama in southern Japan, that I first noticed this nation’s proud relationship with the umbrella. As I admired the garden’s majestic streams, groves, ponds, bridges, and pavilions, I encountered several couples using this beautiful setting as a backdrop for their wedding photos.

Wearing intricately-patterned kimono dresses, each of the brides held a red umbrella. These colored parasols also are commonly held above the bride and groom during traditional Japanese wedding processions, symbolically shielding them from bad luck.

Buddhism arrived in Japan from China, which some historians believe to have been the birthplace of the umbrella more than 3,000 years ago. While most Chinese parasols are now mass-produced, some artisans still craft them by hand. In the 1,400-year-old village of Anren, near the city of Chengdu in southwest China, I watched an elderly lady decorating a parasol. It seemed destined to join the hundreds of umbrellas strung up above a nearby street. 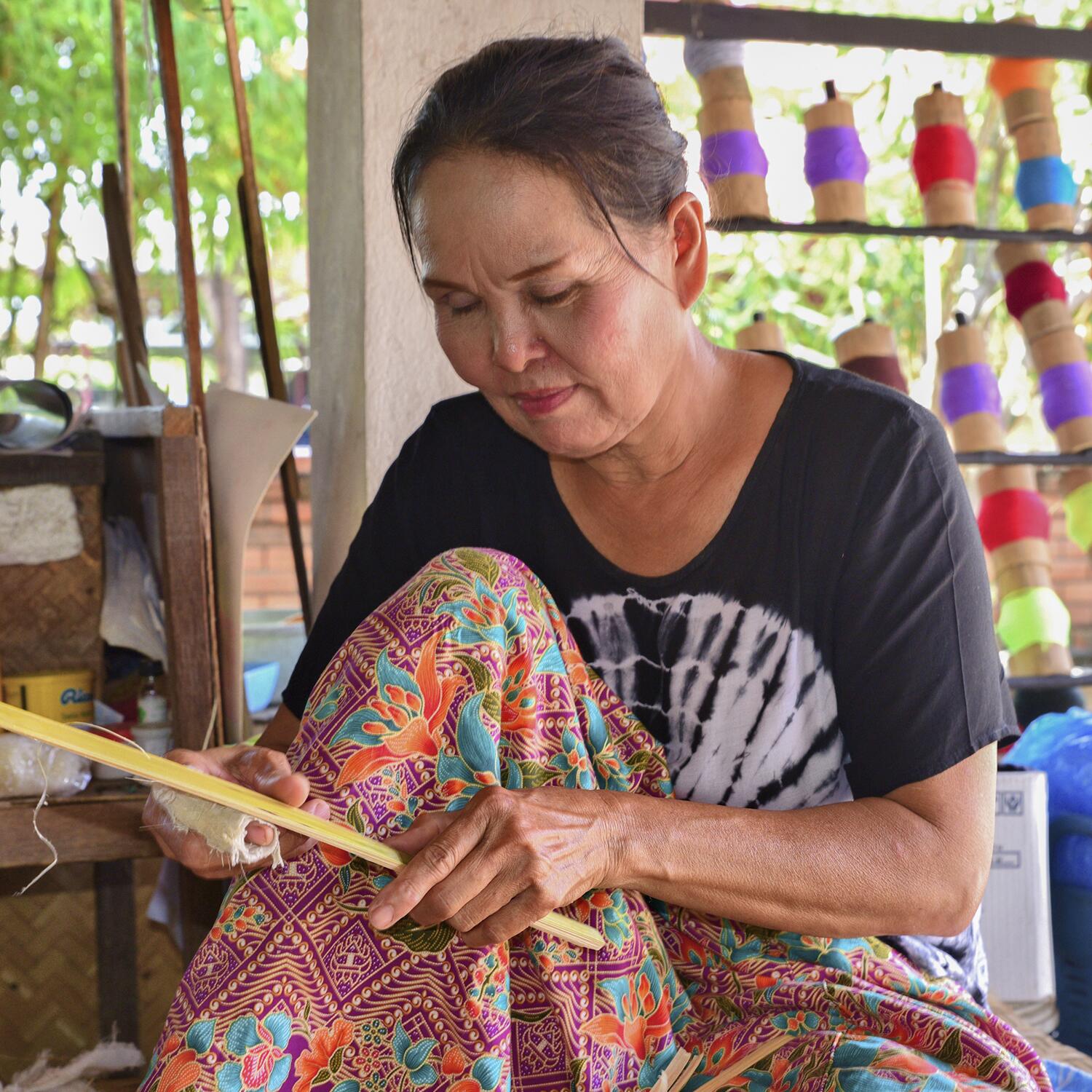 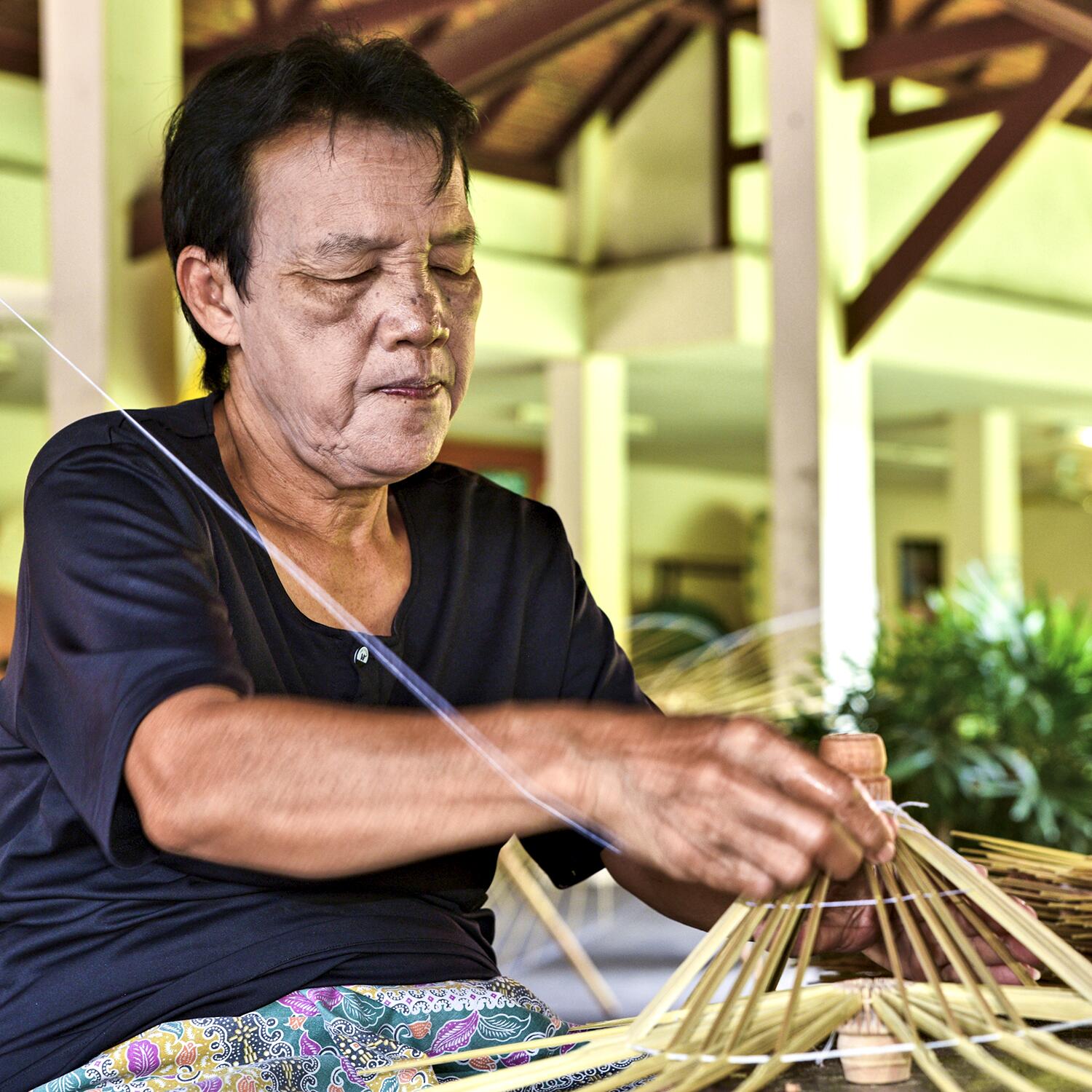 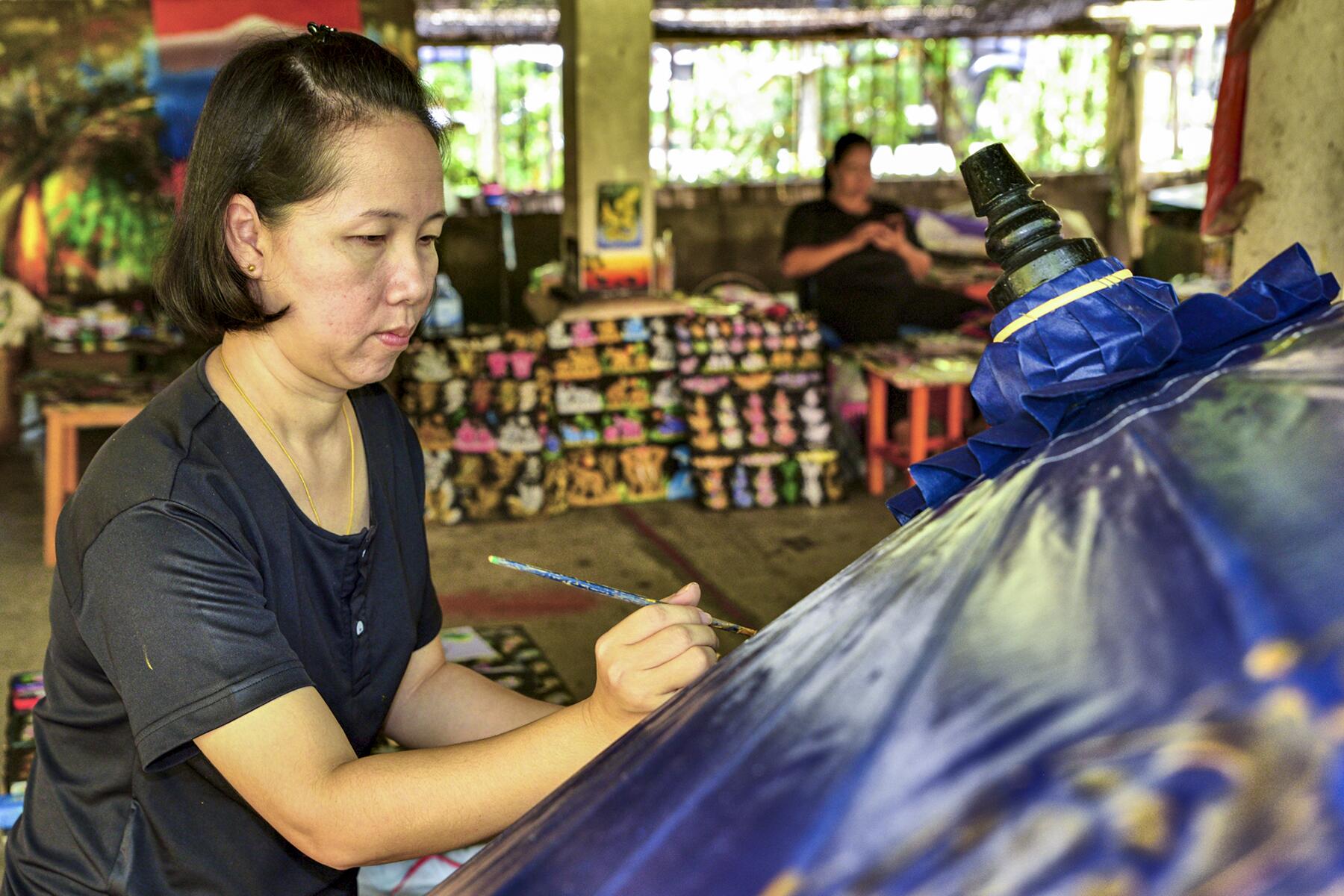 China’s many dynasties spread their influence to nations like Vietnam, where the parasol has been used for more than a millennium. Umbrellas are particularly popular in the north of Vietnam, close to the country’s border with China. It is there that many tourists see them used–similar to in Anren–as a colorful, makeshift ceiling over a street in Van Phuc Silk Village.

Just as in China, most of Vietnam’s ancient crafts have been superseded by factories, meaning there are fewer and fewer surviving artistic hamlets like Van Phuc, near Hanoi. Many such communities rely on tourism. Tours of Van Phuc are advertised throughout Hanoi’s main tourist precinct.

It is the same in Chiang Mai, where many travelers visit Bo Sang umbrella village, about six miles east of the city center. While navigating the narrow alleys of Bo Sang I came across dozens of umbrella artisans. Most were women who were deep in concentration while shaping, stitching, or painting parasols made from bamboo frames and mulberry bark paper. 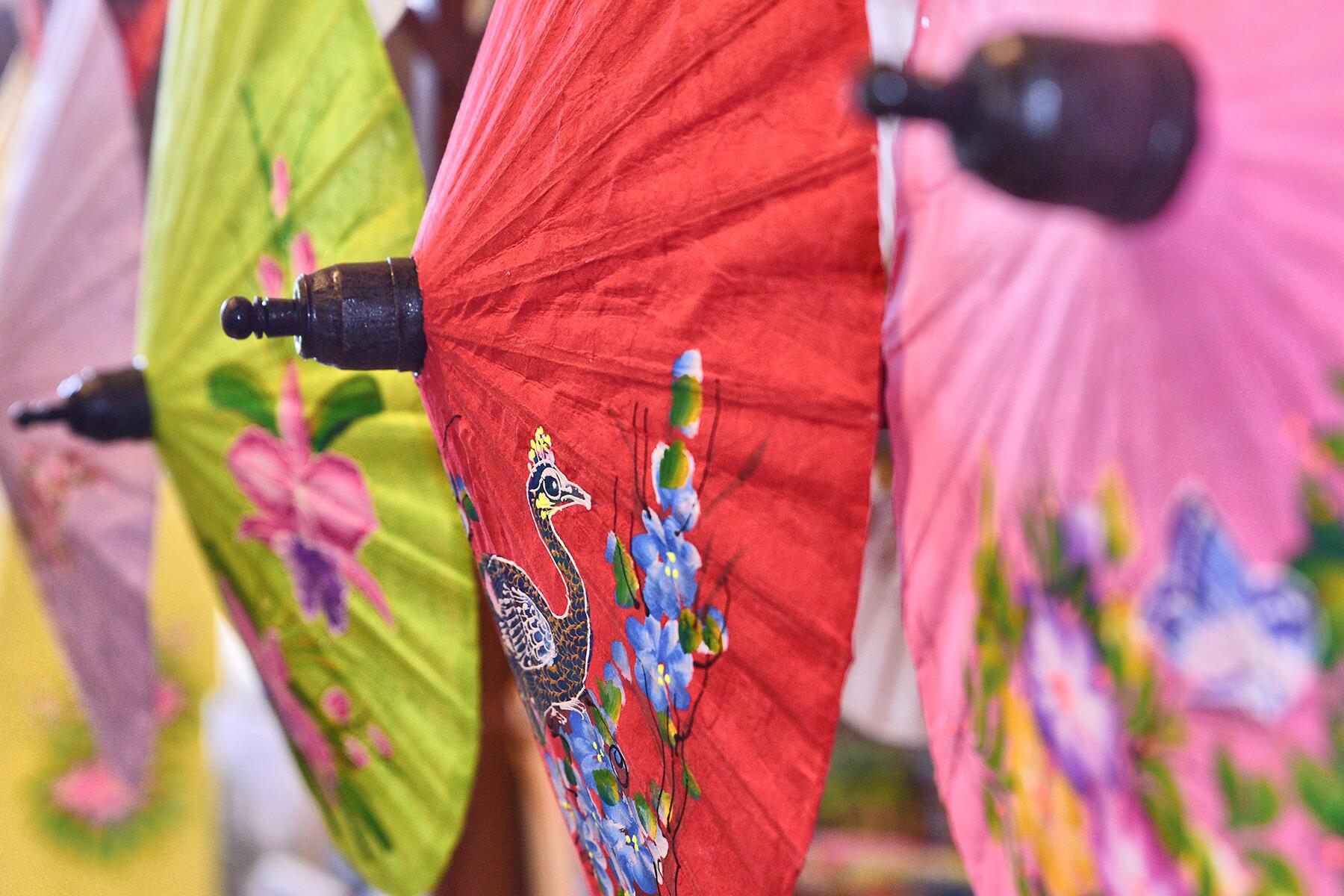 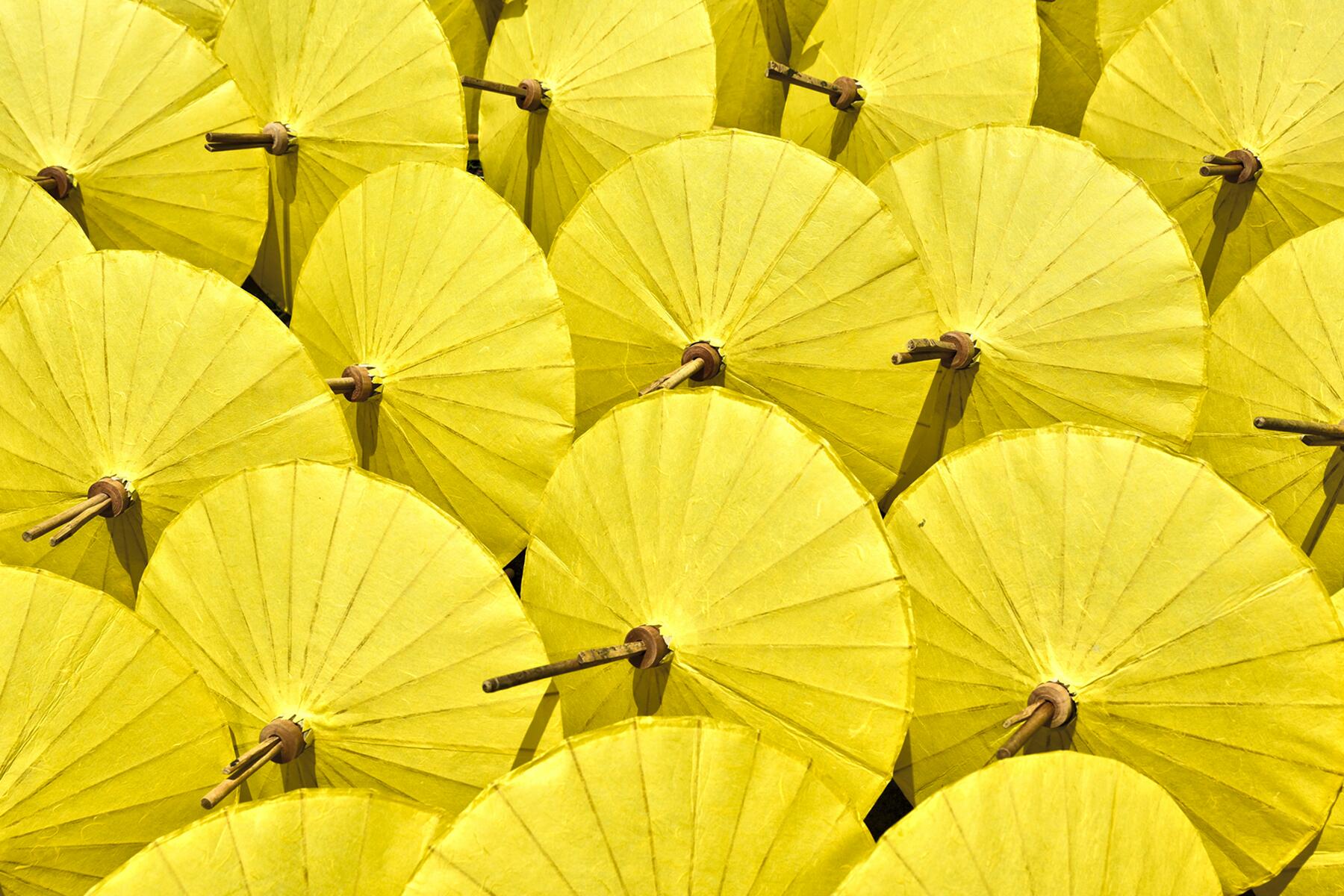 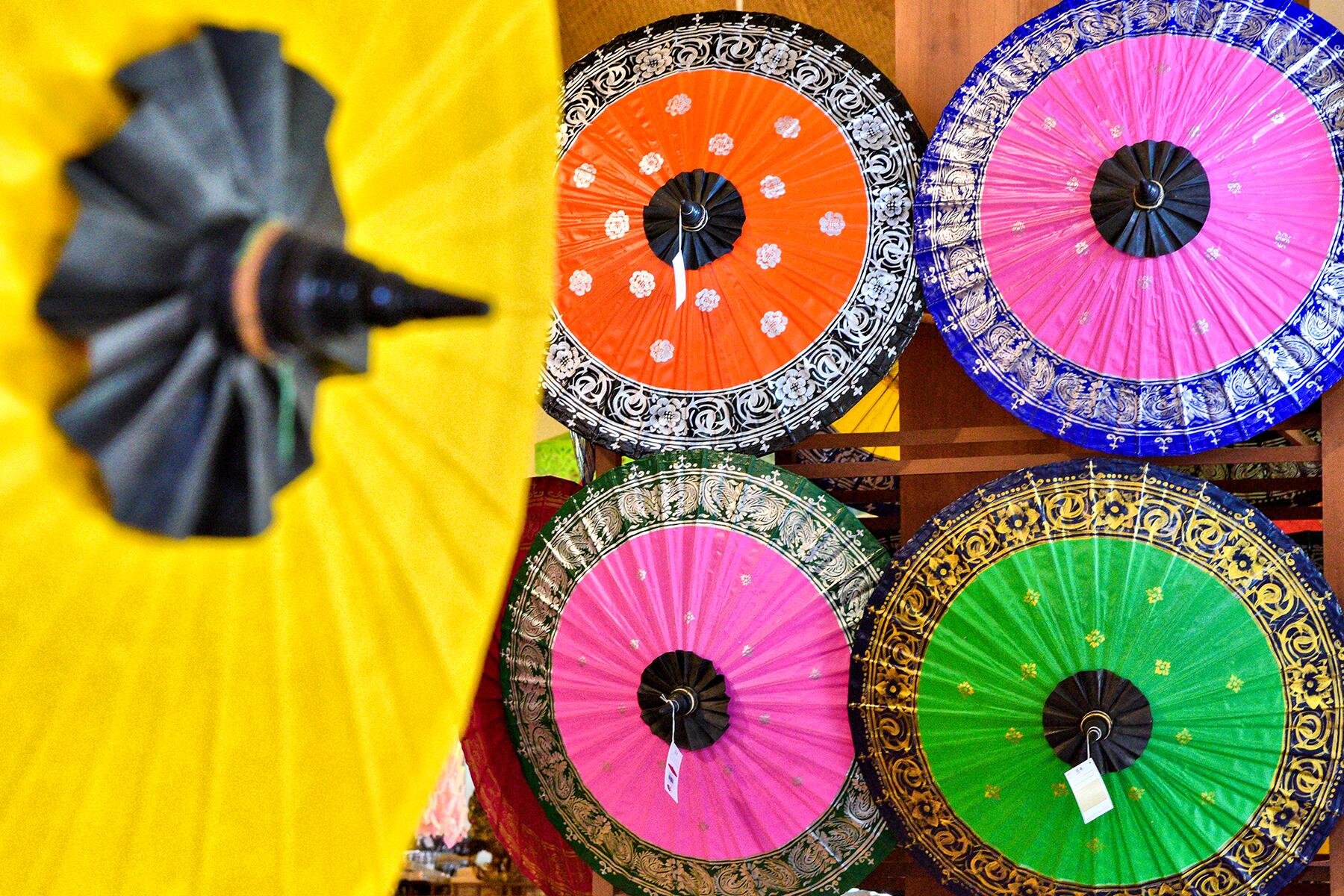 Bo Sang’s umbrellas are vivid. Fuchsia, lilac, lime, turquoise, and gold varieties competed for my attention as I entered one of the village’s large co-op centers. In these tourist-oriented complexes, visitors can buy completed umbrellas, order custom-made versions, or just sit and watch the production line of artisans in action. Their pretty products end up in homes the world over. Whether their owners know it or not, these umbrellas are intended to protect them from catastrophe. In this cursed year of 2020, that’s an appealing benefit.