Get ready to spend your next vacation inside an IRL Disney movie.

Have your eye on a Caribbean vacation? Before you make plans to go to the Bahamas again, you should know that there’s a tropical destination catching everyone’s attention for looking too Instagram filtered to be true: Cartagena, Colombia.

Can an affordable Caribbean destination with Technicolor buildings and sapphire oceans really exist? We checked it out just to be sure. Our verdict? Not only is this corner of the Caribbean gorgeous, we’re pretty sure it’s an IRL Disney movie, no filter necessary. 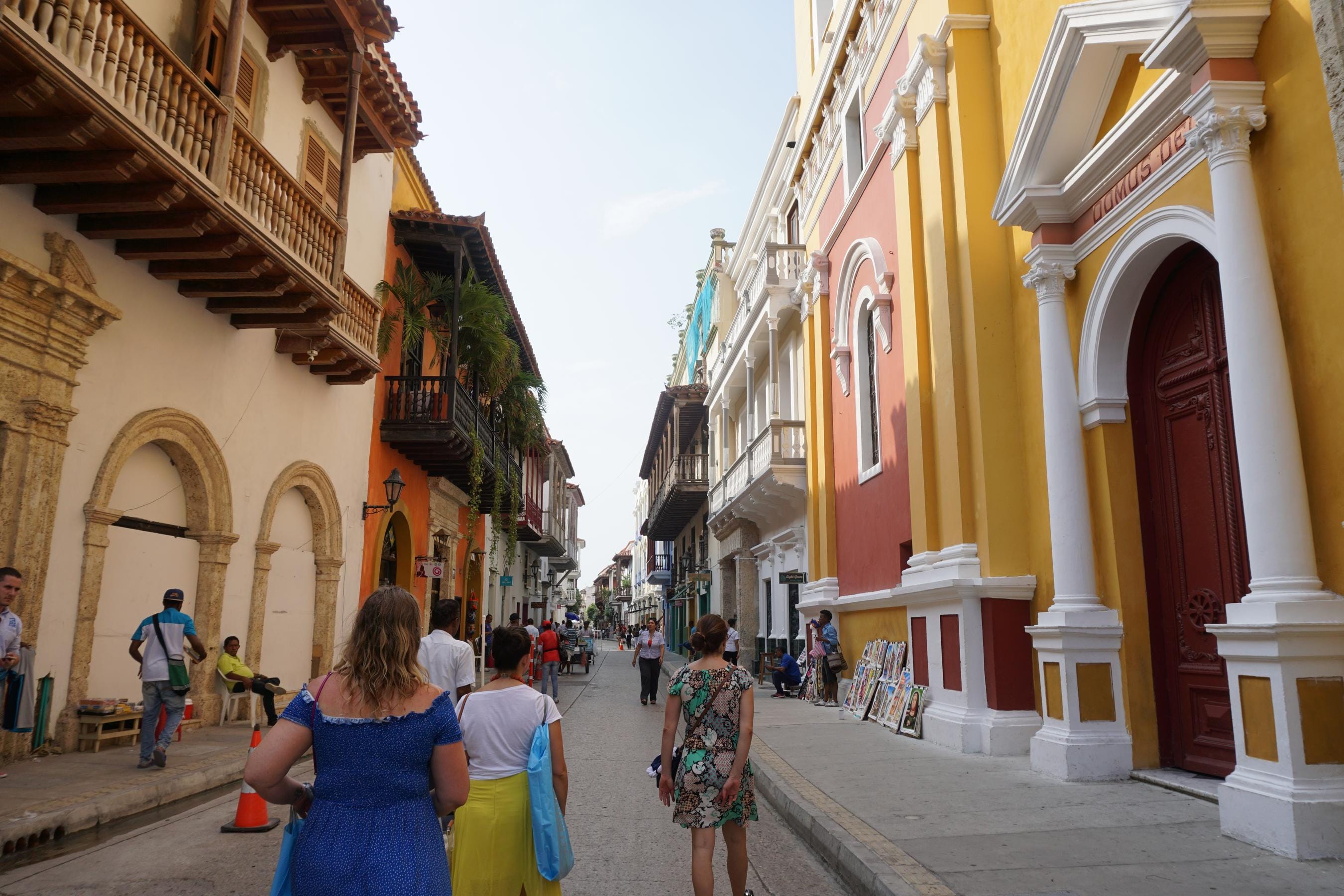 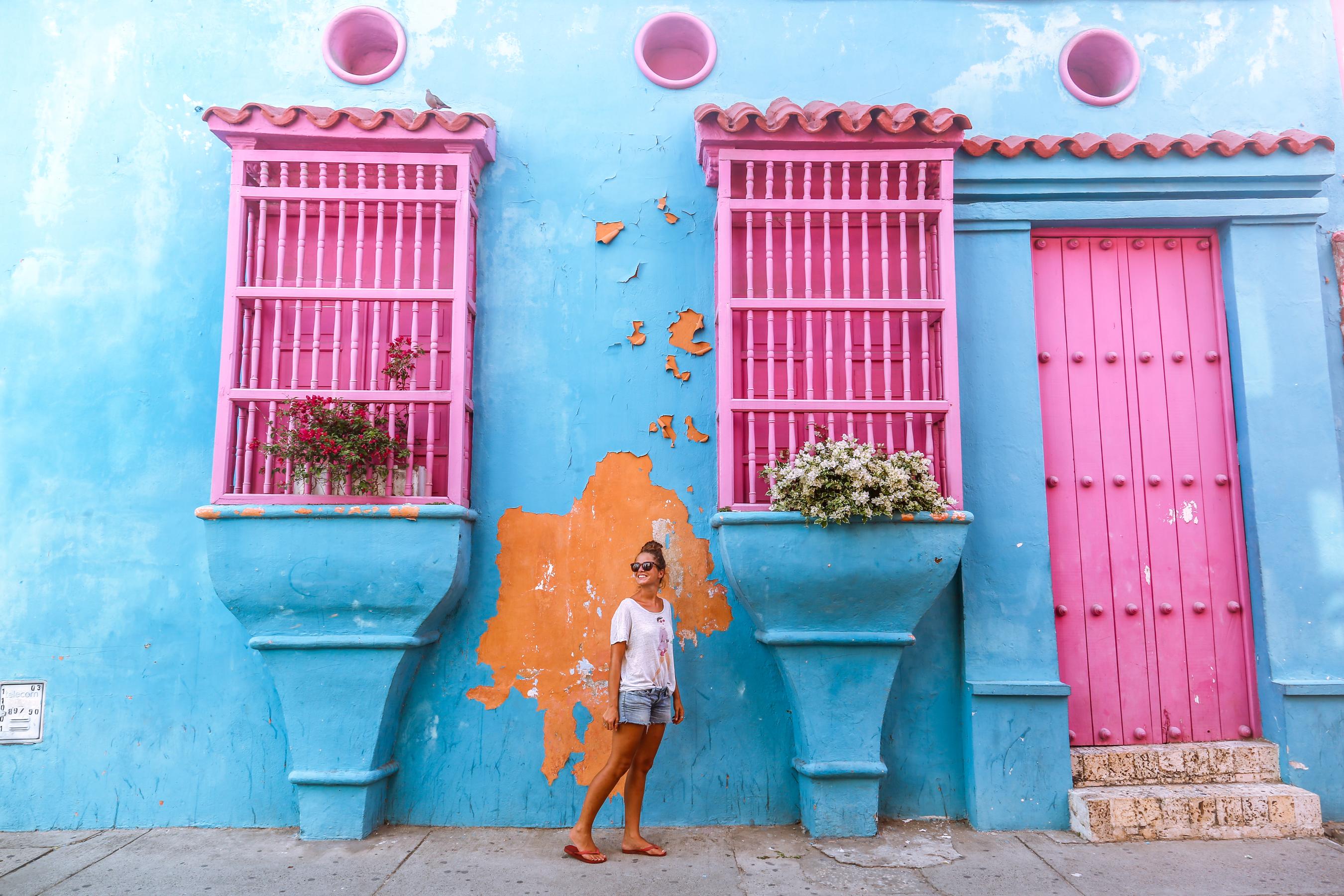 Exiting off of the busy thoroughfare to drive through the towering main gate of the walled city is just about as close to time travel as you can experience this century. The streets are cobblestone, the buildings 16th century and painted pink, or gold or peacock blue that are part Tangled, part Coco and its all frankly, a little disorienting.

The sun is brighter, colors are more vibrant and even the air is cartoonishly coconut-scented. And for a moment our brains go into overdrive: Is this real life? A fever dream? Our own personal version of Enchanted?

Then something truly terrifying happened. On the faces of a group of consummate city-dwellers, tetchy Starbucks addicts who are permanently irritably in need of a vacation, crept a cartoon-caliber grin.

And from that moment on, everything was almost obnoxiously wonderful. Our Instagrams were sappy, our tweets overly romantic and our friends back home wondered if we were OK. We weren’t. We had stumbled into a real-life Disney production and we were not ready. 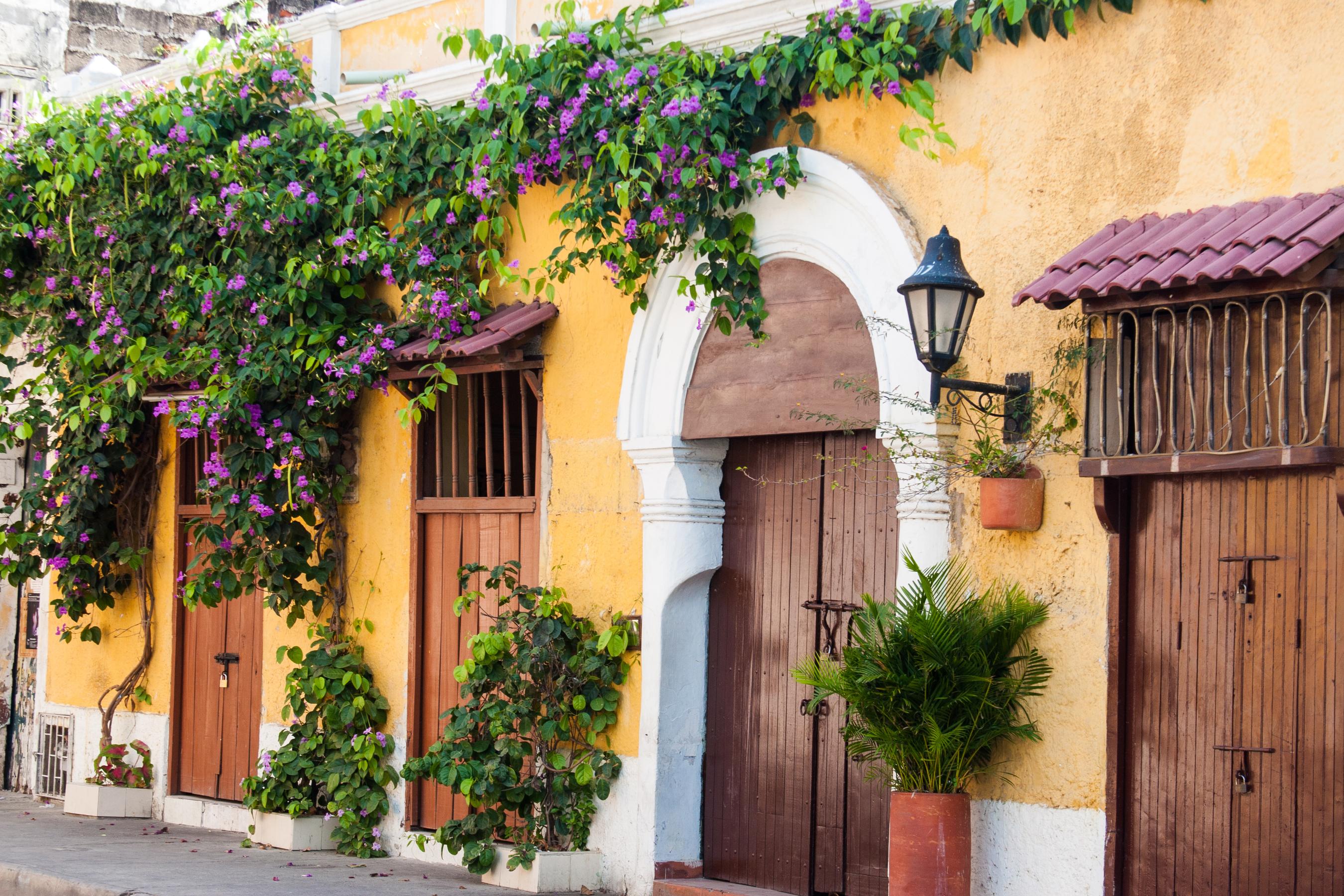 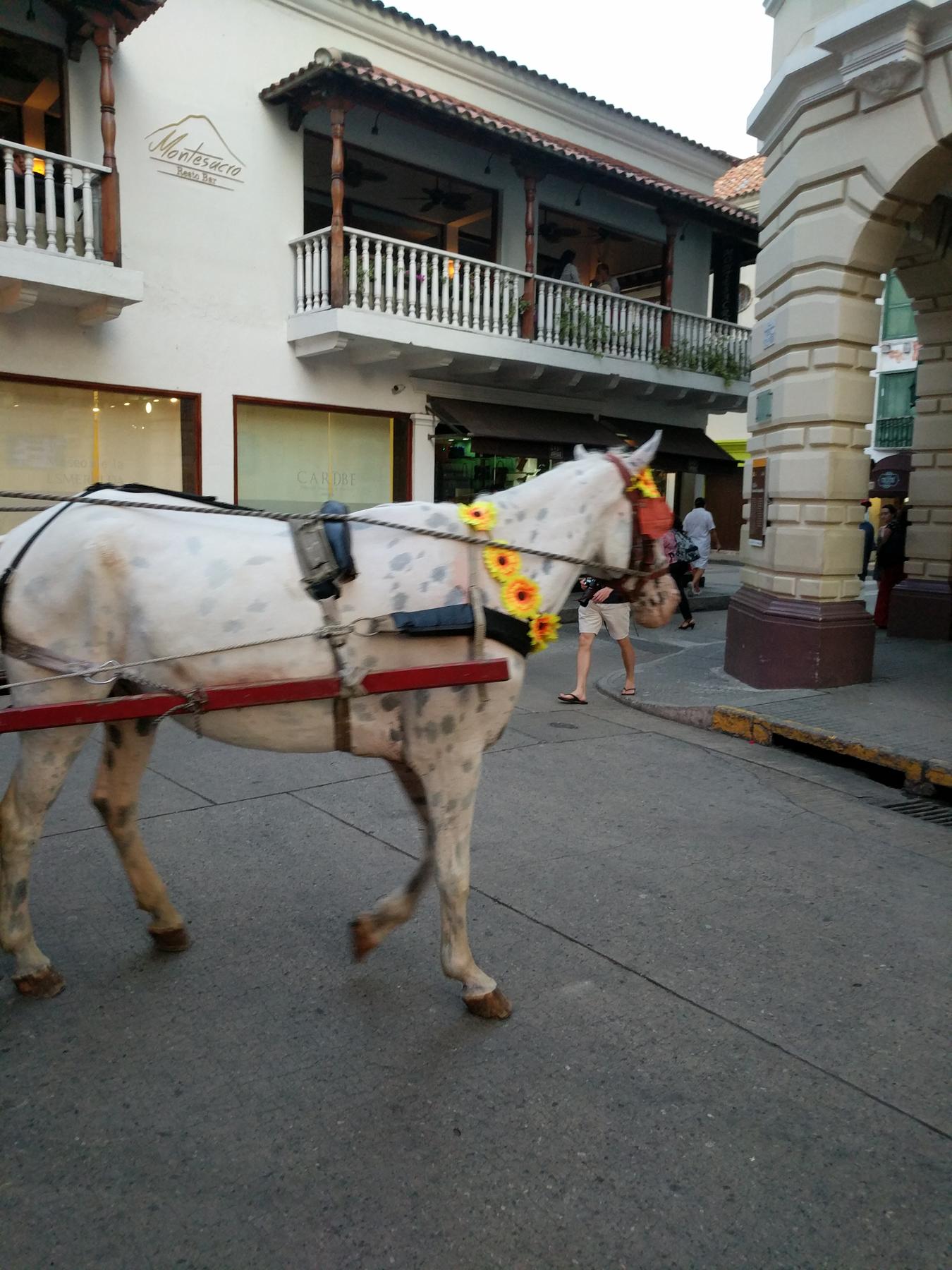 The vibe in Cartagena is best described with a scene: Shortly after we arrived, as we strolled down a cobblestone street, grinning like idiots and taking pictures of every ochre or sapphire house with white trim windows, we turned a corner. Right in front of us was a master violinist, playing Sibelius underneath a balcony overflowing with hanging purple wisteria. Birds were dancing in the vines. And just when it seemed the moment couldn’t get any more surreal, a horse-drawn carriage clopped by. And that horse had sunflowers in its hair.

And that, in a nutshell is what it’s like: a string of impossibly beautiful scenes that follow one after the next until you are so overwhelmed with beauty and music and happiness that you’re reduced to the Disney version of yourself: wide-eyed, giggling and full of a warm, happy feeling that floats out of you in tiny cartoon hearts.

Just like in a Disney movie. You won’t hear any renditions of “Under the Sea” but you might spot a group of aspiring Kendrick Lamars dropping fast, Spanish rhymes over fire beats. Cartagena frequently bursts into song and the best time to catch a musical moment is at night when the vibes around the city get seriously “Kiss the Girl“: restaurants move their tables out into the streets and squares, five-piece bands play Caribbean music by gurgling fountains, and trios of tenors serenade women looking down on them from the balconies. The mood is seriously romantic.

But if you came here with friends because cuffing season is over, there’s always drinking.

Every great Disney movie has an acid sequence. If you’re in search of a little trippiness, try Absenta, a bar where the chairs are on the ceiling, there are teacups in the chandeliers and the mixologists dress like mad scientists and craft drinks in beakers.

Their house-crafted tinctures are a closely-guarded house secret and are some of the best in the world. If you drop by for a visit, try the 70 Gnomes, an absinthe-based drink that will send you back out into the night waltzing with the green fairy.

Or Check out the Pirates of the Caribbean

Or, at least, visit the spot that bested them every time: Cartagena’s great wall. Once upon a time, Cartagena was one of the wealthiest cities in the world (which might explain why it’s painted in the Pantone palette for joy). Word of caches of gold and jewels (check out the Caribe Jewelry and Emerald Museum to see or buy some of the highest quality stones in the world) caught the attention of pirates.

So Cartagena’s Spanish colonists built the beautiful, intimidating wall that still surrounds the city today. Then they kitted it out with some impressive anti-pirate tech. Tour the wall during the day and a guide can show you the booby-trapped gunpowder room, the hallways designed to trap invaders with a trick of light and the anti-cannon walls.

You can even spot a statue of a real pirate: the last guy who tried to storm Cartagena’s walls. He’s depicted in front of the wall’s main fortress minus the leg and arm they relieved him of before sending him home. The best way to get a view of some of the other spots where some great fails of The Pirates of the Caribbean took place is to have drinks on top of the wall at Café del Mar Cartagena, a bar with great cocktails and an even better view of the ocean (best seen during sunset). 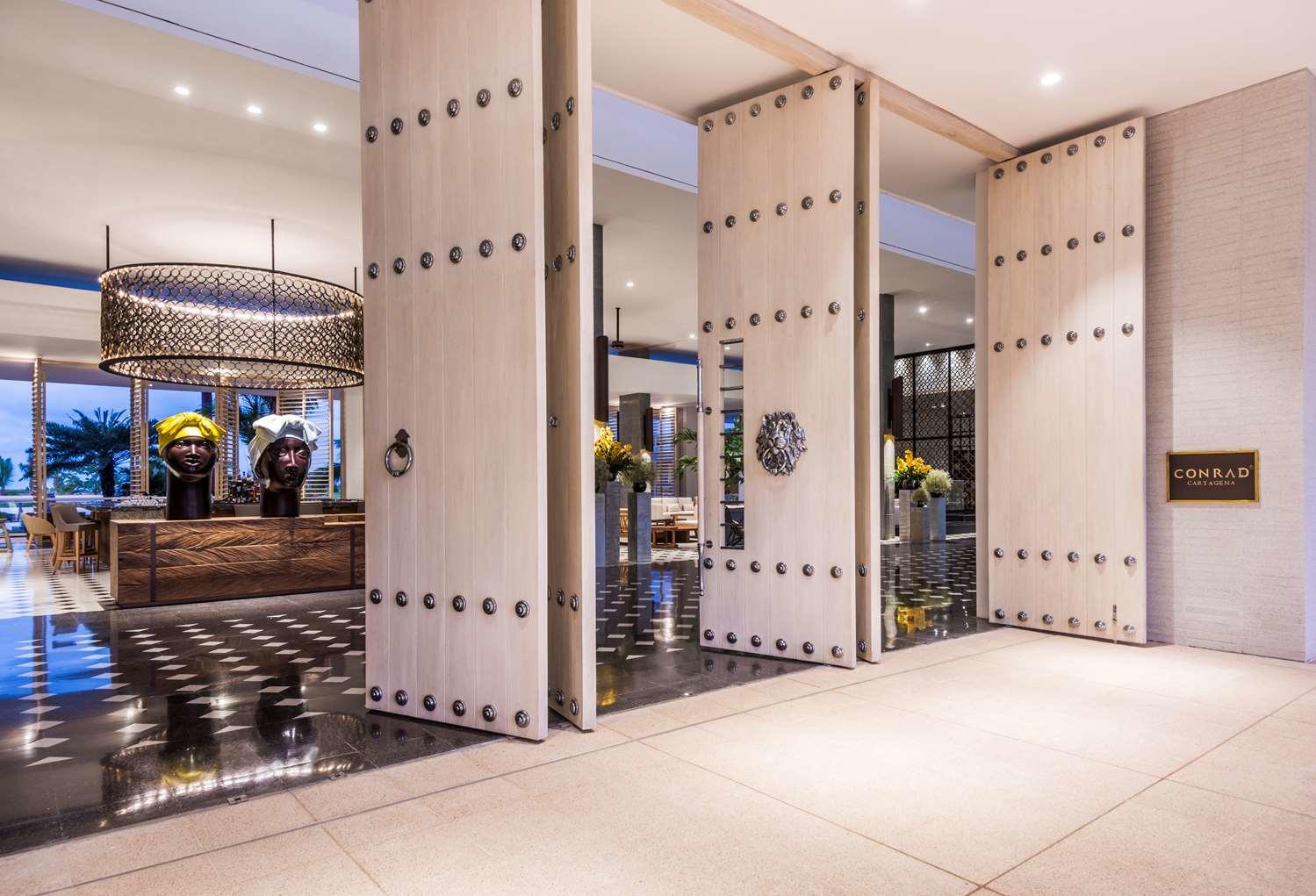 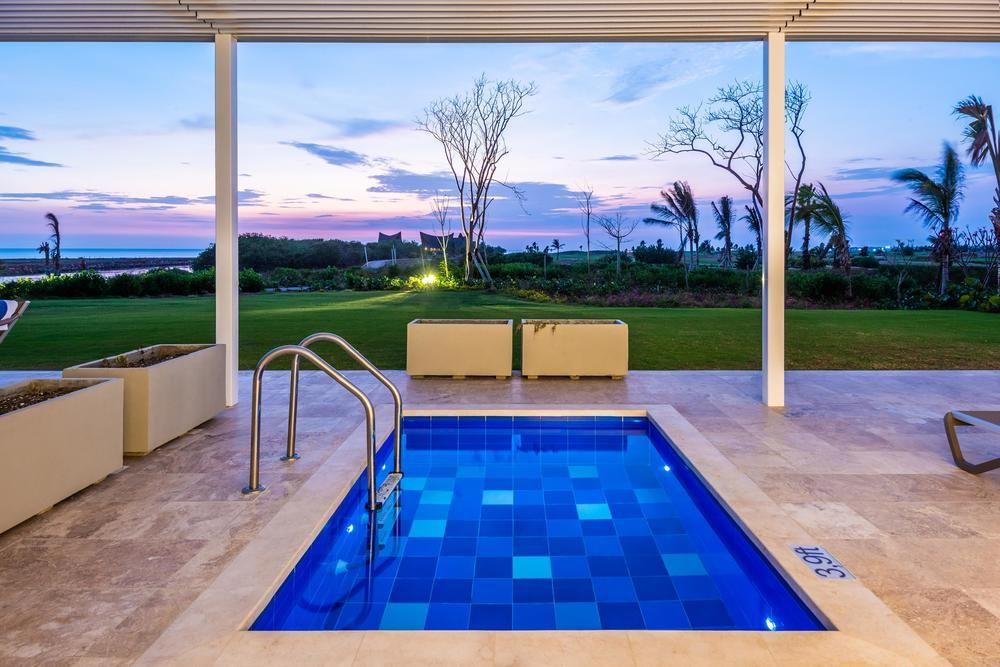 The only things that are un-Disney about Cartagena are the hotel prices. At the Conrad Cartagena, the region’s first luxury resort, you can rent a suite with its own private pool for around $300 a night.

It’s not technically a Disney castle but it’s just about as large and considerably greener. This new corner of the Caribbean is all about sustainability and Hilton is leading the way with its Travel with Purpose initiative. It plans to not only reduce its carbon emissions by 61%–be sure to check out the Conrad Cartagena’s solar panels and breezy open-plan (that takes no extra energy to cool)–and double the amount it invests in local, minority-owned suppliers.

That means that not only are there no straws here but all of the seafood is ocean to table, fresher than you’ve ever tasted and expertly prepared in the property’s four amazing restaurants. We personally recommend Biblioteka, one of the best restaurants in Colombia.

Our other recommendation? Visit Cartagena now before it gets crowded. The more people who find out that there’s a secret tropical Disney village where you can channel Amy Adams in Enchanted, the more crowded paradise is going to get.