This hidden corner of the Caribbean is home to fine dining and unique experiences.

Walking through the main gate into the walled city of Cartagena is like walking into a Technicolor dream. The buildings are painted surreal shades of pastel; flowering vines overflow from balconies and you can see it all from a carriage drawn by a horse with flowers in its hair. 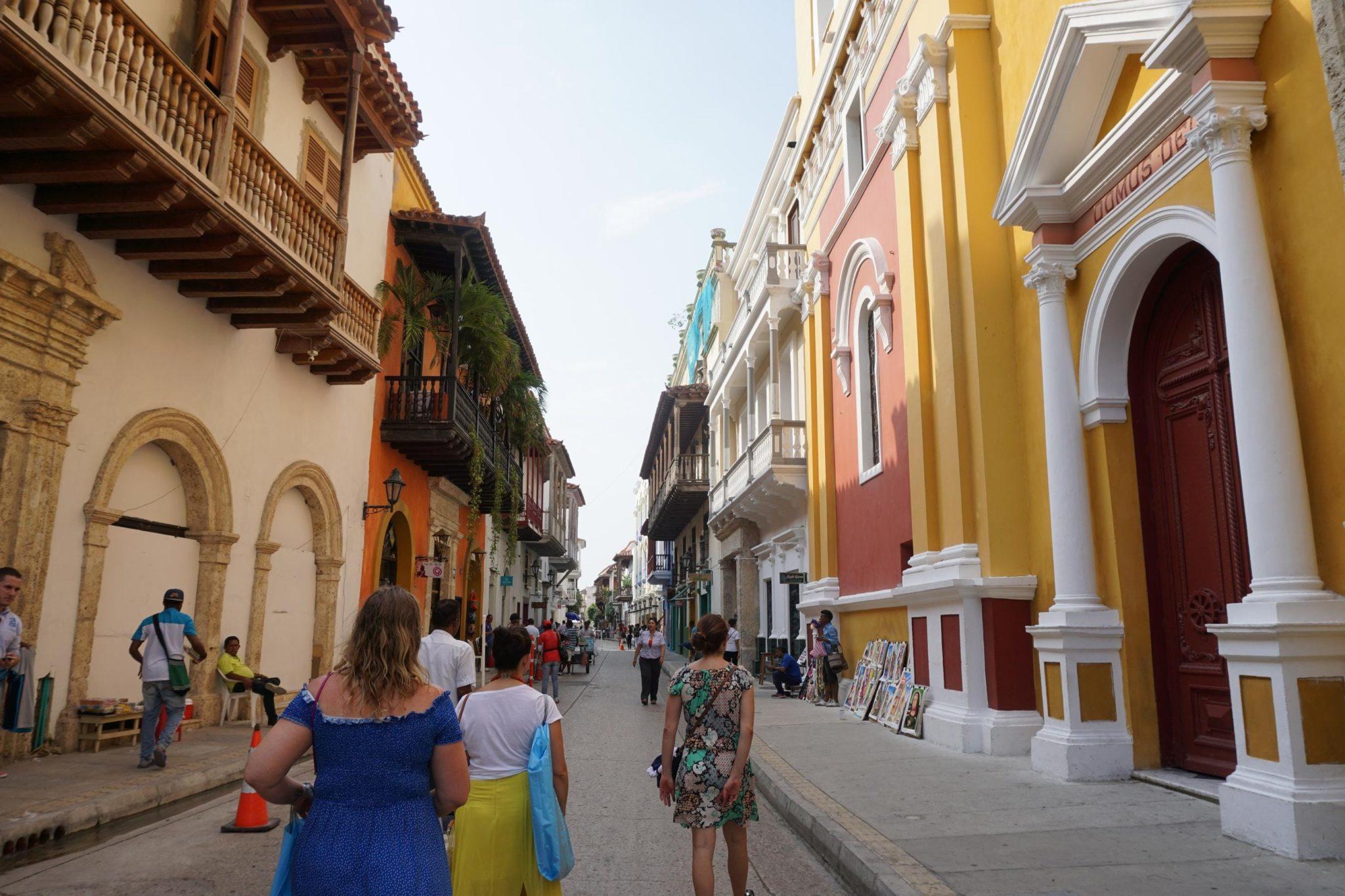 This corner of Colombia is crazy-gorgeous, but getting lost in its Instagrammable moments means missing out on some of the coolest parts of the city. More than just a pretty place, Cartagena has personality: surrealist bars that serve absinthe cocktails, buzzy art galleries and chef-driven restaurants. That’s why the Conrad Cartagena, one of the city’s newest hotels, has dedicated its Stay Inspired itineraries to plug guests into Cartagena’s chic, quirky vibe–like the women’s prison that serves one of the best meals in the city.

On a Friday night, Interno, a prison-pink annex of The San Diego Women’s Prison is popping. Interno is Spanish for “inmate” but, during business hours, its barred doors are open to a steady stream of foodies, VIPs, the curious and the hungry who tuck into the small but chic renovated hall, which is wallpapered like the Beverly Hills Hotel. 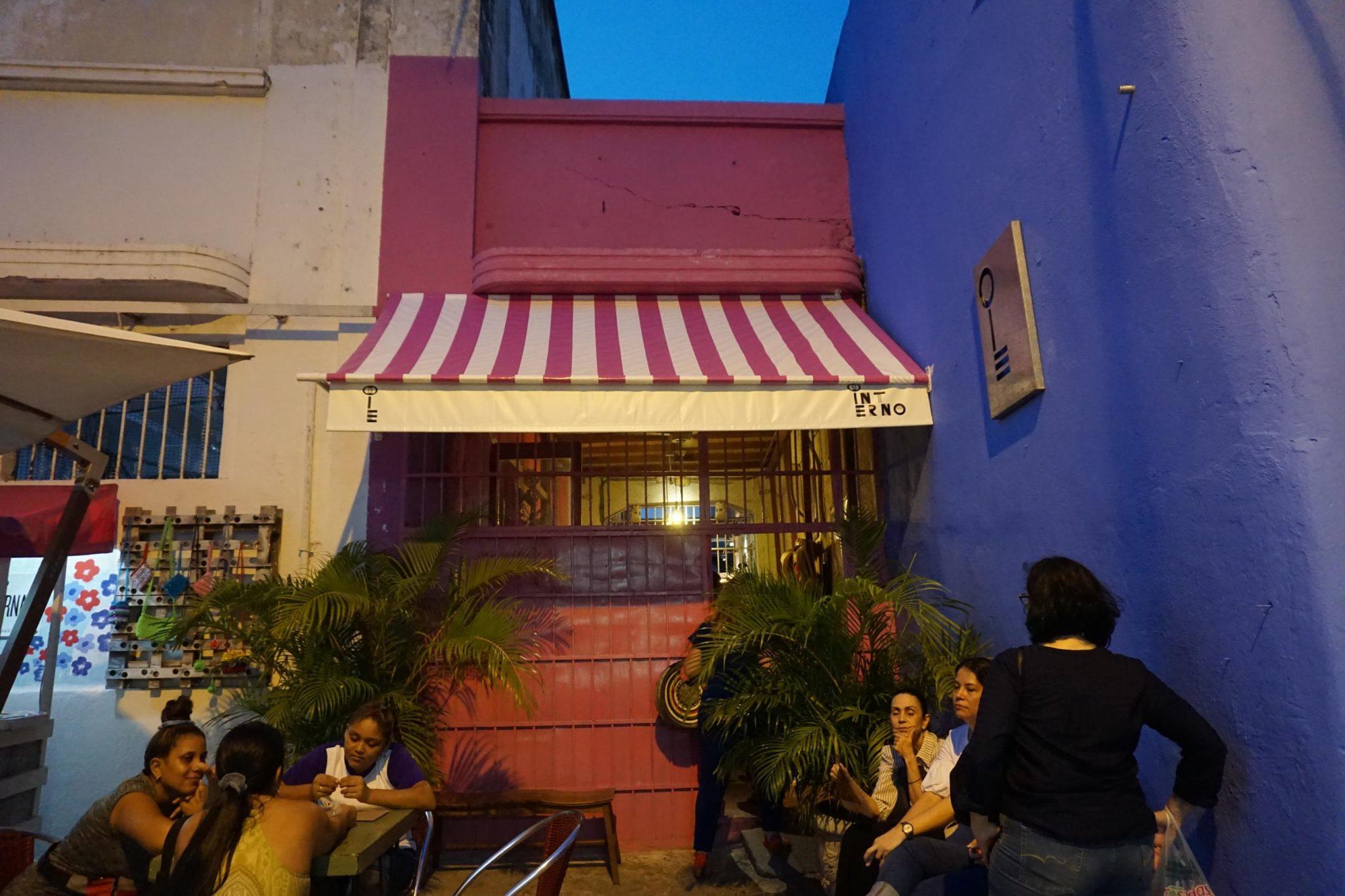 It’s hard to know what to expect when having dinner in a prison, a restaurant run by inmates. But from the sound of the rapid shutter-clicking and Instagram storying of our table of journalists, everything here is different than what they expected. That includes our waitress, Crystal, who enters through the locked and barred kitchen door ebullient and sporting Interno’s signature t-shirt and stylish prison-pink turban… and then greets us in perfect, distinctly American, English.

After she takes our orders, “Is she American?!” is all our table can talk about and whether or not it’s cool to ask. Although the decor looks like it belongs in Dwell and its patrons like they all have subscriptions, that’s where the familiar part of the dining experience ends. And we’re no longer sure what the etiquette is in this situation. 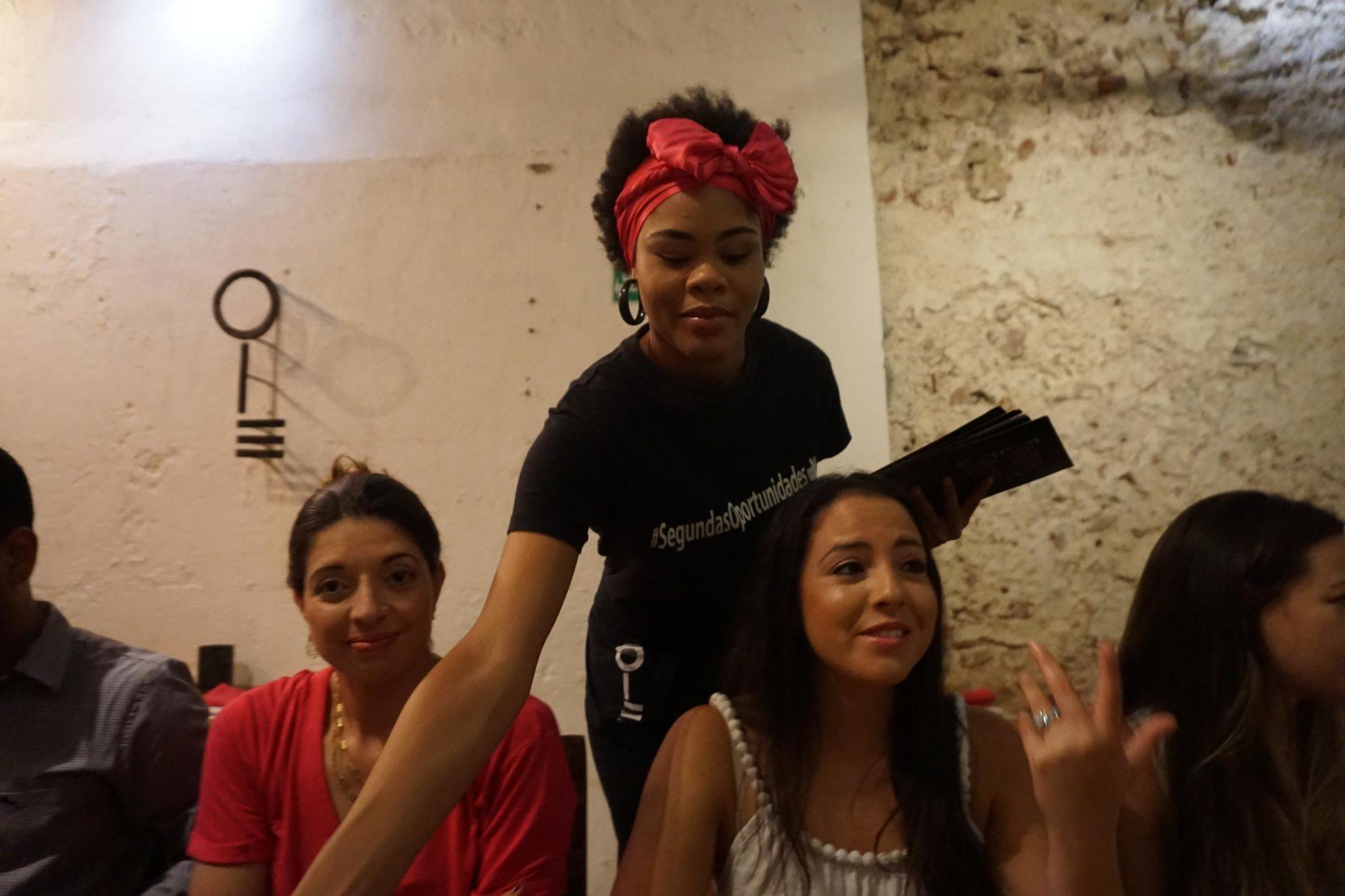 You wouldn’t, for example, ask your waiter at Applebee’s just what life choices led them to a job at this particular branch. But when your waitress’ extra-correctional activity is directly related to the reason why we’re all here, is burning curiosity enough of an excuse to ask “what are you in for?”

And, a little bit of discomfort is part of the point. One of the goals of the Fundación Interno Foundation, the organization that arranged to put a fashionable restaurant in a women’s prison, is to encourage interaction and dialogue; it’s not just for the prisoners who need practice conversing in a professional setting, but for guests who may come hardwired with judgments about anyone who has served time, especially those who are doing so currently.

The other goal is to teach the prisoners how to make great food. While the inmates do all of the cooking, the recipes came by way of some of Colombia’s most famous chefs who donated many of their best recipes and cooking techniques. The result is a supergroup of dishes, the Velvet Revolver of menus and some of the best food in South America. 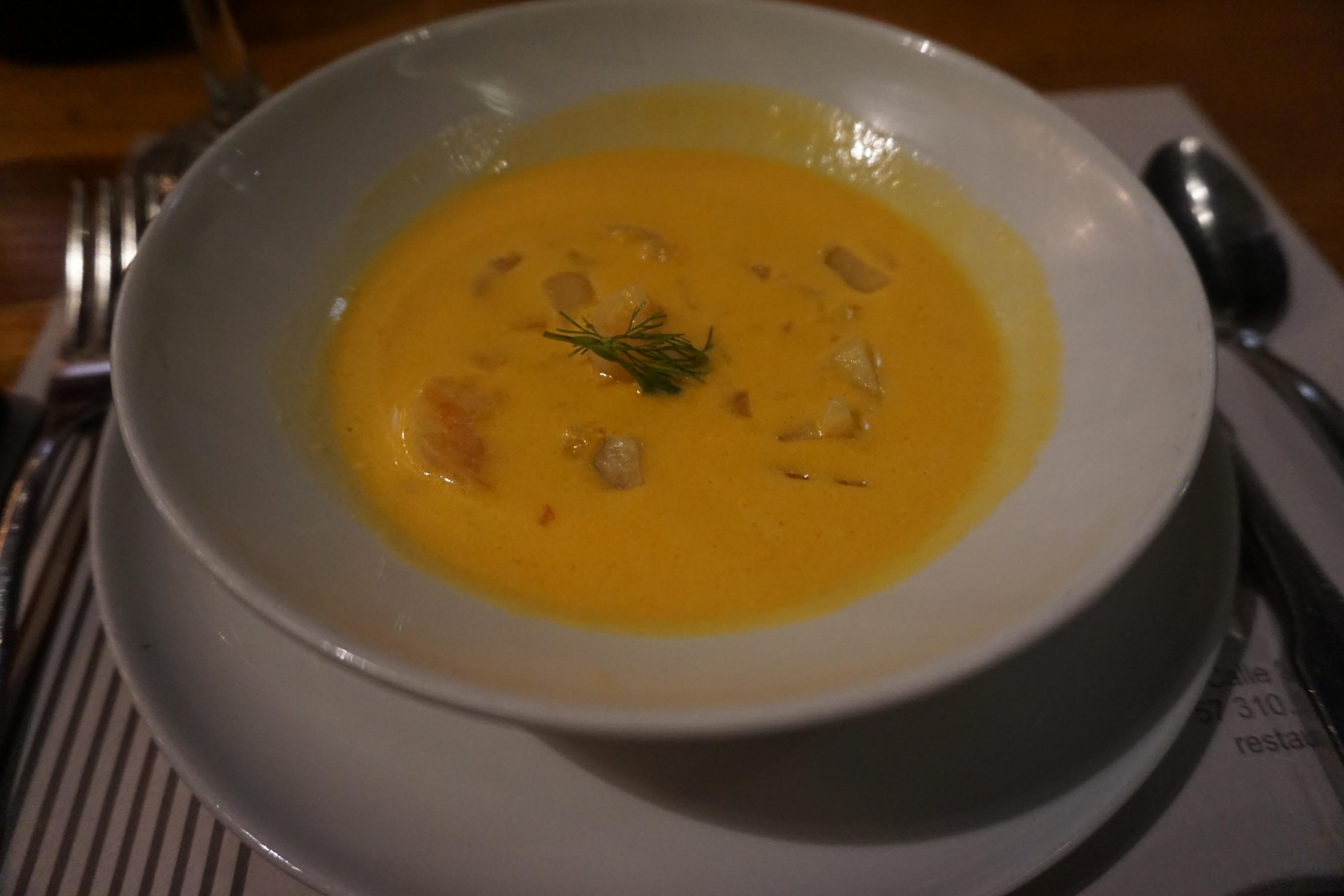 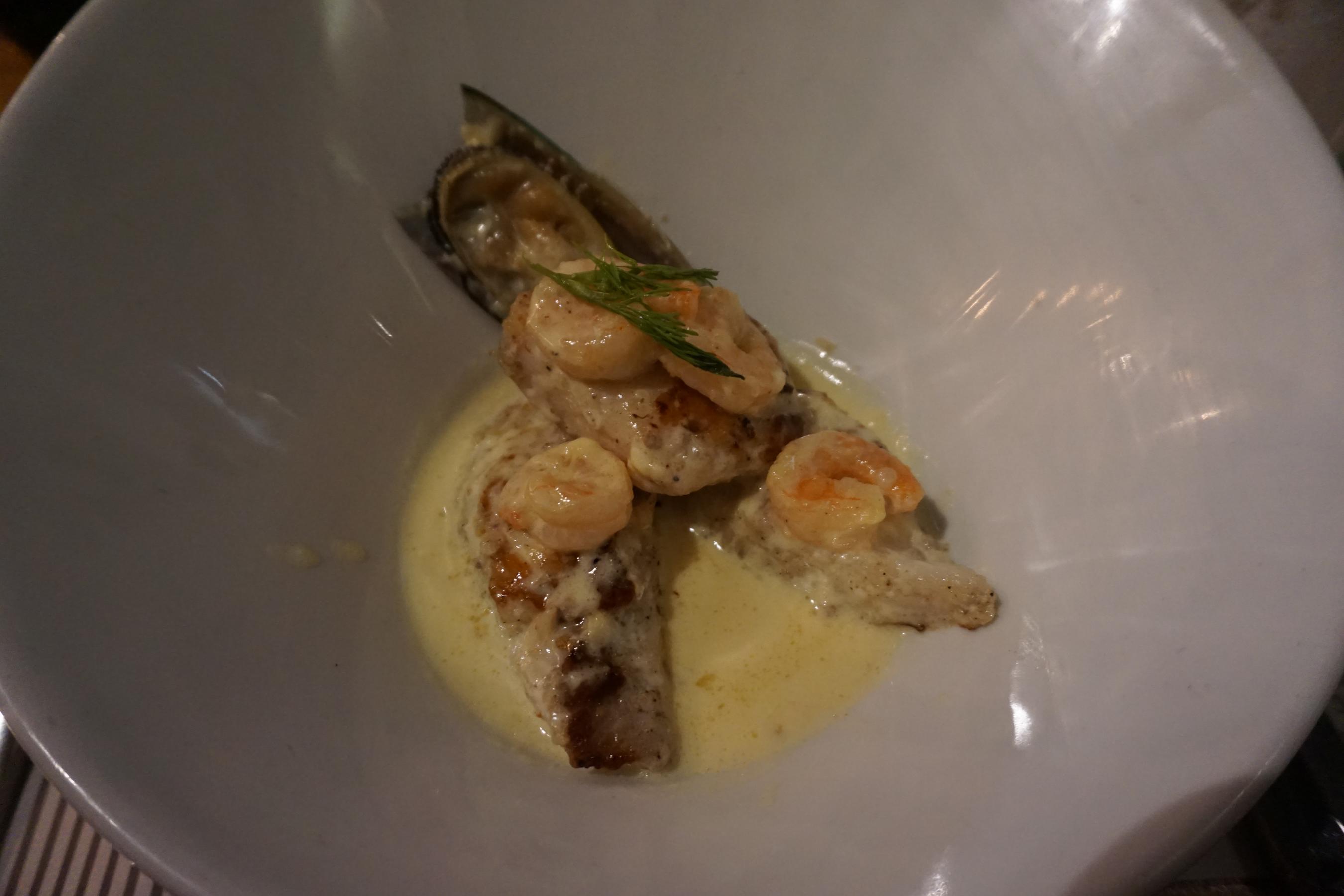 1. Soup with seafood  2. Prawns in coconut sauce with root vegetables

In fact, the food here is almost too good. Interno is, after all, an amazing cause. In a city that’s infamous for its need of prison reform, this restaurant is an important first step. Even if the food were just “good,” people would keep coming for the mitzvah. But it’s amazing. The dishes are simple but singing with flavor–a perfect symphony of the tastes of the Caribbean. Coconut and fresh seafood and spice combine in ways that you’ll remember long after you’ve already gone back home.

Doing the most is kind of Cartagena’s brand. As it becomes a Caribbean hot spot, it goes out of its way not to become your parent’s favorite Caribbean cruise port city. Things here have authenticity, a vibe that’s echoed in Interno and have made it one of Cartagena’s trendiest restaurants with a list of famous guests that includes Colombian President Juan Manuel Santos, Colombian singer Carlos Vives, various actors and athletes.

No matter who is dining here, patrons often talk with their waitress long enough to feel comfortable to ask, in our case, a fellow American citizen and good dinner conversationalist, just how she ended up in a Colombian prison.

Says Crystal, who’s happy to answer the question, it’s kind of a long story. The short version is that she came to Colombia from Miami to pursue her music career. Unfortunately, she fell in with the wrong crowd and a “bad” manager. Then, she doesn’t elaborate and we don’t press, one thing led to another and she ended up here.

Now, says Crystal, the Colombian government is set on making an example out of her. Although she has already been behind bars for several months, she has not yet received a sentence and must wait, indefinitely until one is handed down. 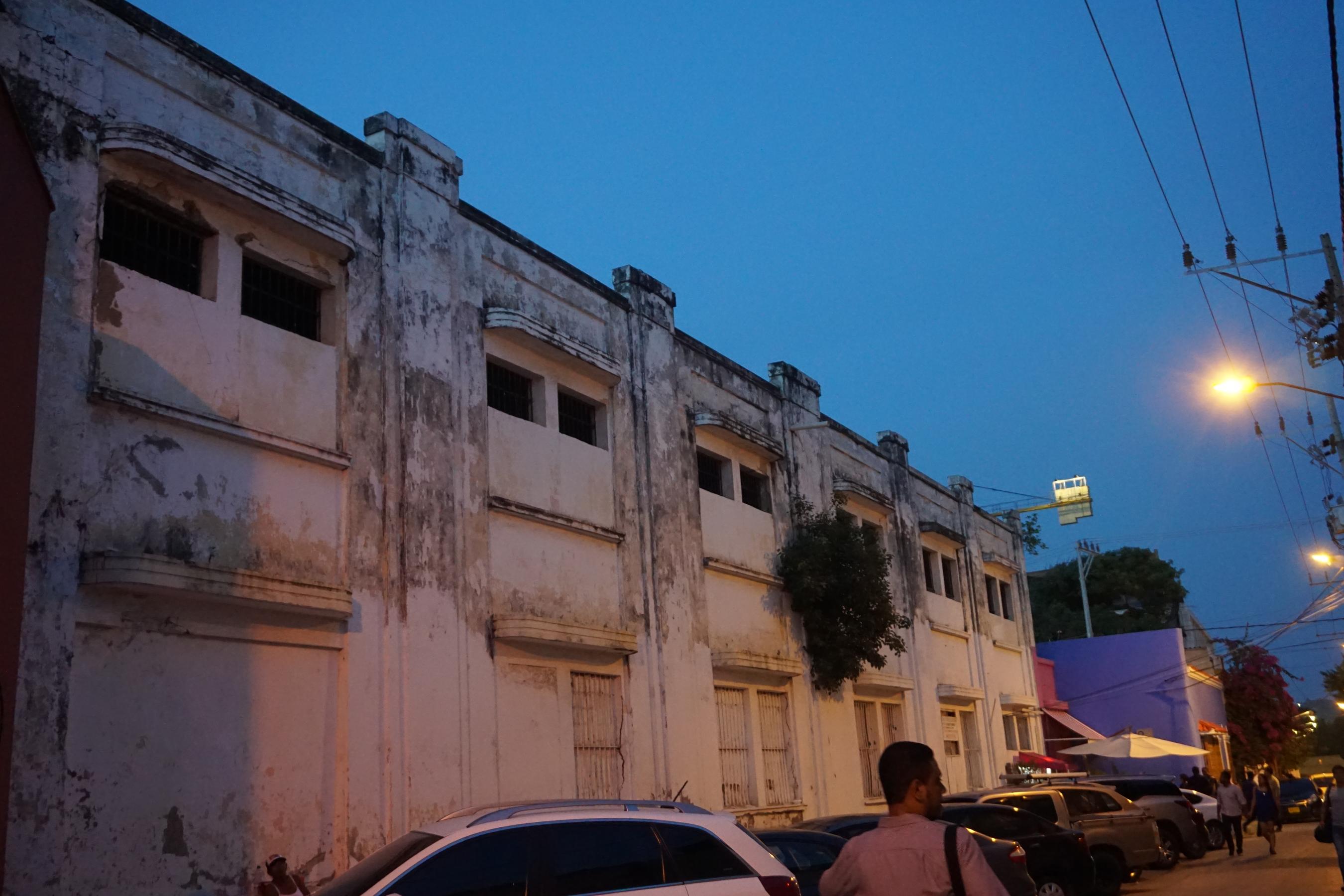 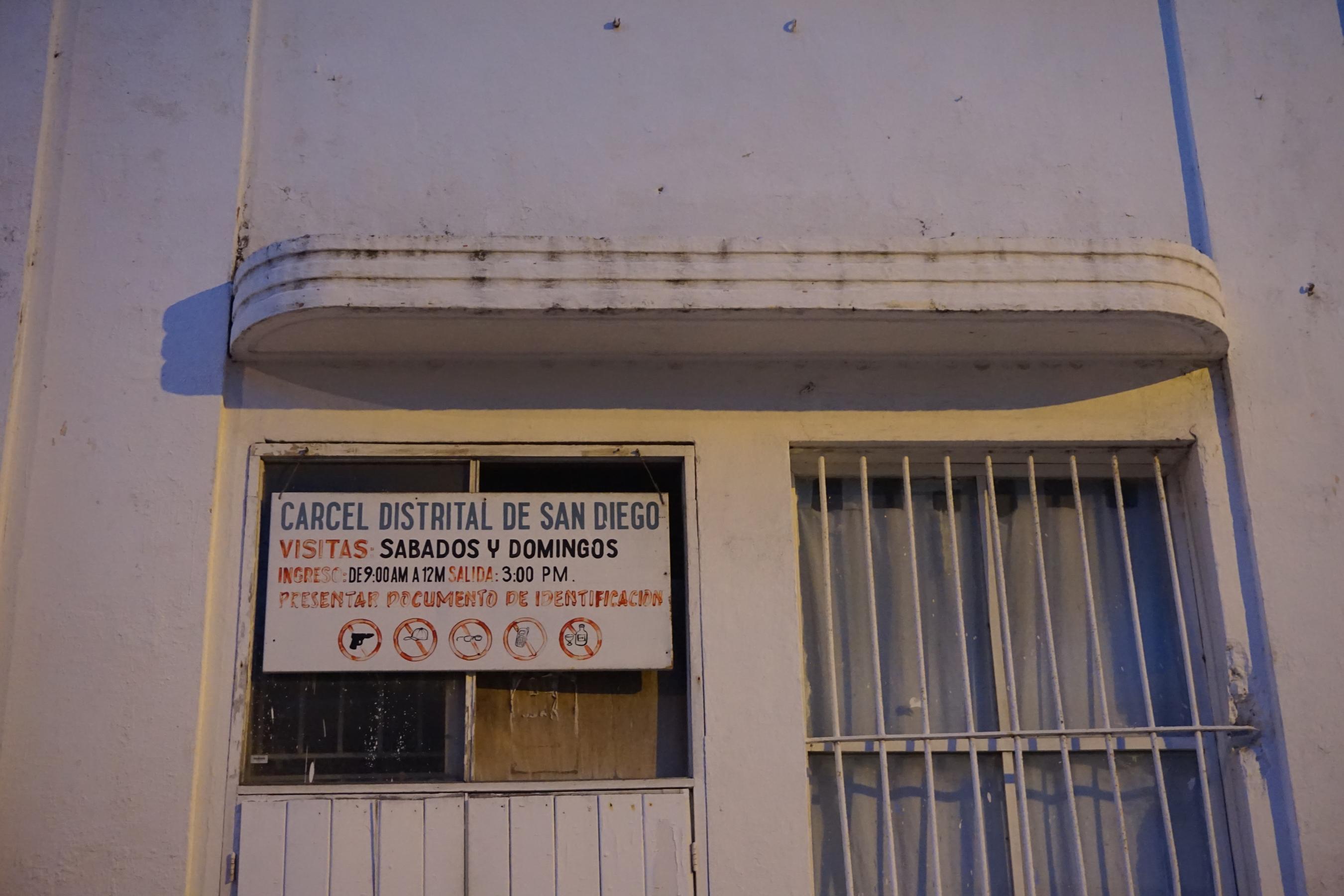 The exterior of the prison

It’s not an uncommon story, Comilo Mosquera, Interno’s culinary teacher, tells us. Many of the women here have not received sentences. And, he adds, “Most of them are innocent. Most of them–70 percent innocent.”

Colombia’s prison system has long faced criticism on several fronts, one of those is overcrowding–this prison has a capacity of 100 inmates but currently houses around 130 in several large dormitories. Mosquera says that prisoners sometimes have nothing to do during their stay in but watch time go by.

That’s why programs like this one do their best to make life a little bit easier for the women and give them a second chance at life. They earn a salary for the hours they work, and, for every day they spend working in the restaurant, they get a half day off of their sentences. 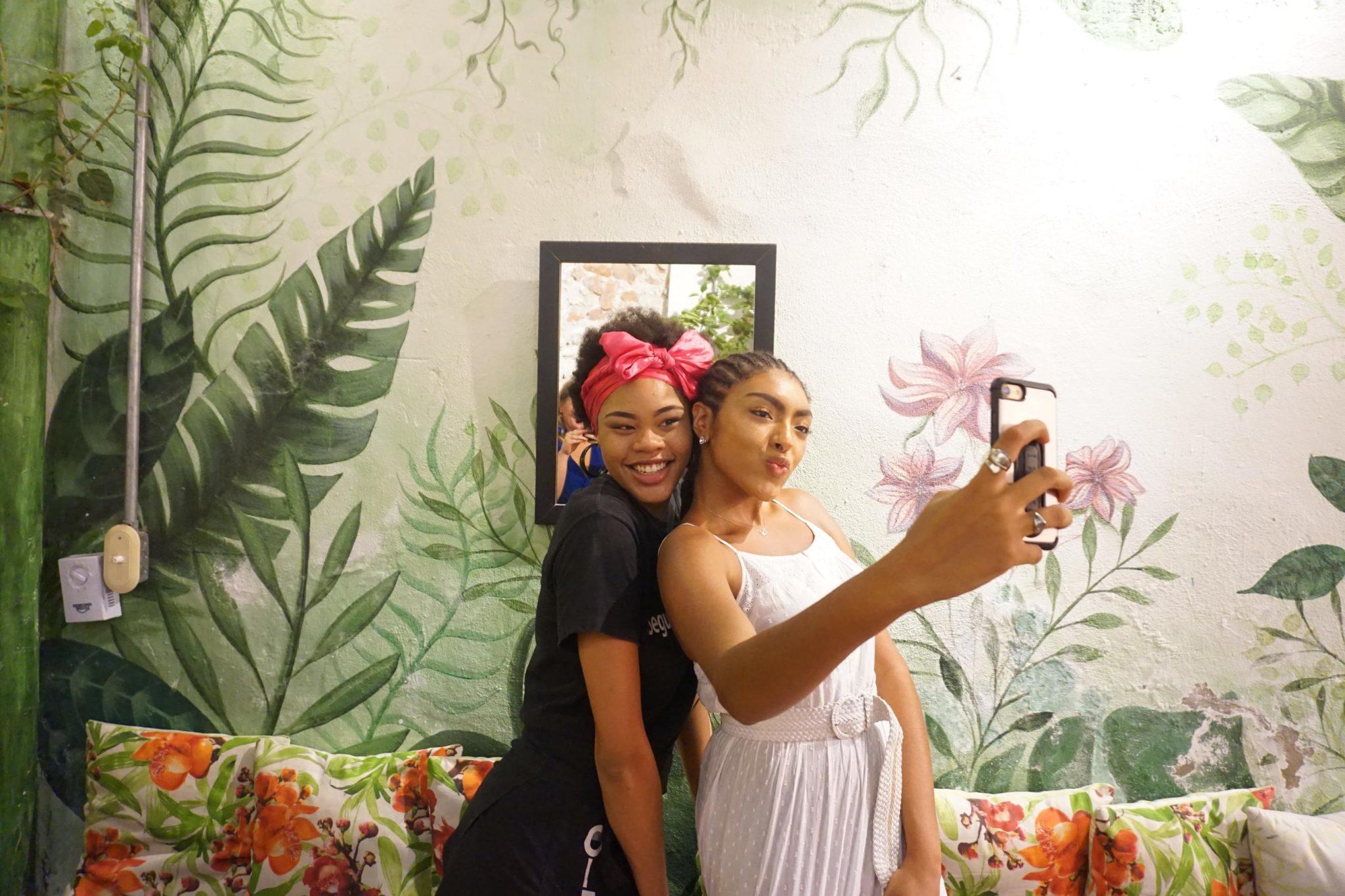 Currently, graduates of this program are working in restaurants all over Colombia. The program also offers other opportunities for women to work in gardening, finance, and business administration. Crystal is learning managerial skills and even pursuing her singing in the music program.

The feeling you get when you visit Interno is that life, at least in this part of the prison, is a little bit better. Says Mosquera, “they feel like ‘this is my kitchen, this is good.’ [A day spent working in] the kitchen is a good day.” And the vibe is good, the playlist is fire, and people often leave having gotten to know their waitress—no longer just a prisoner in visitor’s mind–a little better before snapping a selfie together on their way out.

To learn more about the program, or how to donate, head here.