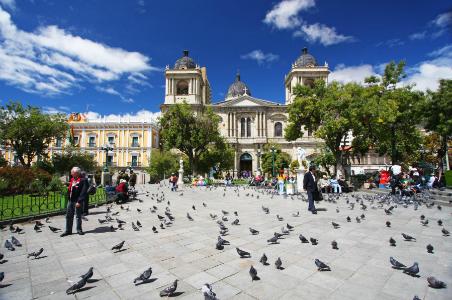 Because it's surrounded by some of the top destinations in South America, such as Argentina, Brazil, and Chile, the small, landlocked country of Bolivia is often overlooked by travelers heading down south. The country continues to struggle to find its place within the tourism market, and with its own financial and political issues at hand, tourism hasn't been the government's priority. But Bolivia is as safe as its neighboring countries and provides budget-friendly options for traveling through different areas of the country; with the U.S. dollar exchange rate being extremely favorable, it makes for a very economical trip. Most who have visited the country, which is made up of many different microclimates, have been backpackers, usually passing through.

What most travelers don’t know is that Bolivia offers a lot for the adventure seeker, as well as those set out to explore something new and mostly unseen. From the high peaks of the Andes Mountains, to the hot and sticky jungles of the Amazon, to the mind-blowing salt flats that can be seen from outer space, Bolivia has a little bit of everything. 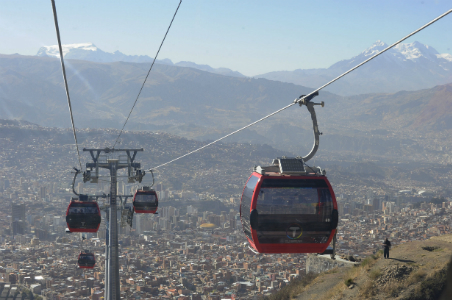 While the official capital of Bolivia is Sucre, La Paz is the administrative capital; at roughly 11,975 feet, it’s the de facto winner for world’s highest administrative capital. The city sits in a bowl surrounded by the high mountain peaks of the Altiplano, with triple-peaked Illimani towering over. If you fly into neighboring city El Alto’s airport—one of the world’s highest international airports at 13,325 feet—you’ll enjoy gorgeous views as the bustling city in a crater comes to life when the plane approaches the runway. The city’s new urban cable car system is an even better way for locals and tourists to enjoy the country’s views (and shorter commute times). It’s the longest and highest cable car system in the world, with three of eight planned lines already up and running.

Valley of the Moon 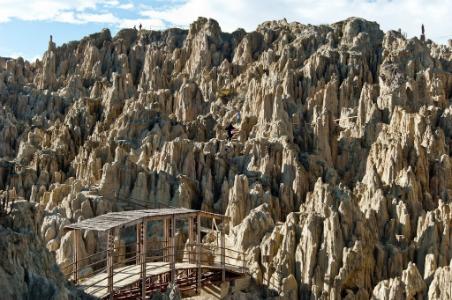 Supposedly named by astronaut Neil Armstrong, the Valley of the Moon is situated about 6.2 miles from La Paz in the small town of Mallasa. The carpet of stalagmites canvasing the desert is what’s left of a mountain composed of clay and sandstone that has been battered by strong winds and time. The distinct formations contain rich variations of minerals, which create a colorful composition throughout the drastic landscape. There are walking trails and tours through the valley, some of which is narrow and made up of uneven paths. 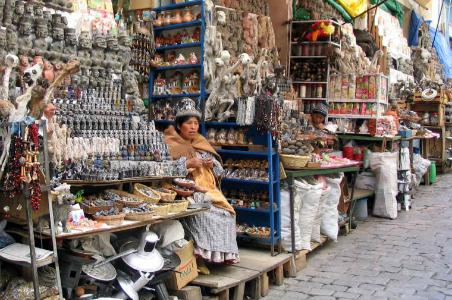 When exploring La Paz, take the time to wander to and around the famous Witches’ Market. The streets are filled with all sorts of potions, lotions, and talismans to either worship, burn, or carry. Some of the specimens for sale in the market can be stomach churning so it’s best to visit with an open mind. It’s a good place to buy one-of-a-kind souvenirs or even to get your fortune read from coca leaves. The Witches’ Market is located in a touristy shopping area in the city center, allowing a visit to fit into a full day’s itinerary. 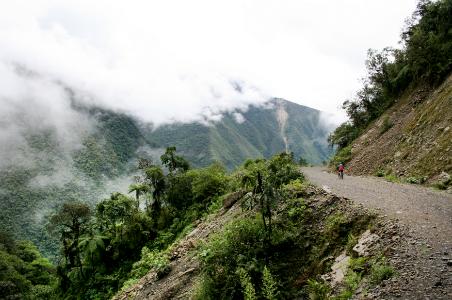 This treacherous mountain track, once known as the world’s most dangerous road, is a popular tourist attraction for those brave enough to cycle it. Bolivia’s government has built a much safer road, but the more-trecherous downhill ride is still used by adrenaline-seeking tour groups. Before the new stretch of road was built, more than 200 people died each year on “camino de la muerte.” While peddling isn’t really required due to the steep decline, the trek isn’t for the faint of heart or first-time cyclists, as riders must constantly keep their eyes on the very narrow road. Alternatively, there are public and private transportation options for those who don’t want to ride down. And for those that do make the trip, the organizing tour groups transport you and your bike back up to the top at the end. 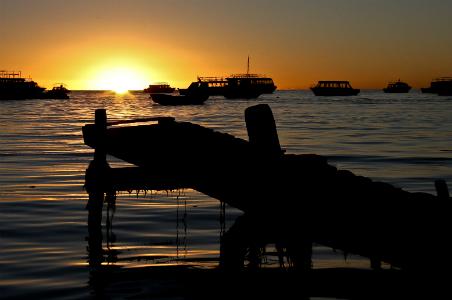 Surrounded by ancient ruins and traditional villages, the world’s largest high-altitude lake, with 3,232 square miles of water, is something that must be seen to fully appreciate. There are boat tours on the lake that take visitors to the Isla del Sol (Island of the Sun) for a private picnic, as well as surrounding villages that help visitors appreciate and understand more of Bolivia’s culture and history. It’s possible to discover rarely visited Inca ruins that lay around the lakeside town of Copacabana. On the southern shore of Lake Titicaca is Tiwanaku, a massive ceremonial area that was constructed more than 1000 years ago. Built from stones weighing more than 25 tons from the other side of the lake, it’s hard to imagine or comprehend how builders constructed the space. 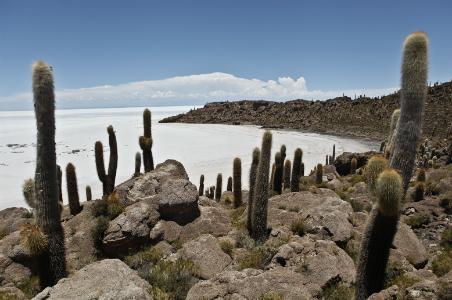 Geographically located in the middle of a desert, Uyuni is the starting point of all trips out to the world-famous salt flats. Located in southwest Bolivia in the departments of Potosí and Oruro, the world’s largest salt flats, encompassing 4,086 square miles, account for 50 to 70 percent of the world’s lithium reserves. It also provides one of the most majestic backdrops, making for some very arresting photos. The light of day makes for an ever-changing view of the white landscape, which is located just a short jeep ride away via many tour companies in La Paz. Along the way, make sure to check out the old train cemetery (less than two miles outside of Uyuni), filled with rail lines built by British engineers. And most tours divert to the Laguna Colorada, a fiery red lake (due to red algae and plankton) with flocks of pink flamingos that are not camera-shy. Visitors can even spend the night at Palacio de Sal, a hotel made of salt, located at the edge of the flats. 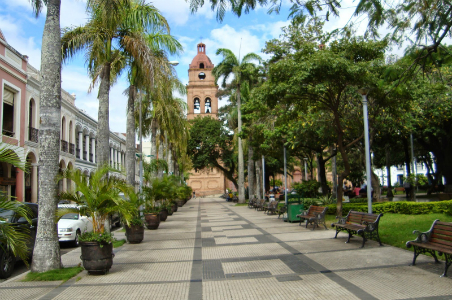 Although every department in Bolivia is worthy of a visit, the city of Santa Cruz (located in the department of the same name) tops the list. Located in the tropical region of the country, the casual and friendly attitude of the locals, as well as the language dialect and unique food, makes Santa Cruz vastly different from its neighbors. Home to Bolivia’s best nightlife and international cuisine, it’s the most prosperous city in the entire country. Although it has a small-town feel, with very few high-rise buildings, Santa Cruz is in fact Bolivia’s largest city and oozes modernity while still maintaining tradition.

David Duran is a Brooklyn-based luxury, hospitality, culinary and overall freelance travel writer who contributes to such publications as HomeAway, The Huffington Post, Destination Weddings & Honeymoons, and Out Magazine among others.  When not traveling for work, he is planning his personal travel.