With its intense winters, fish-filled freshwaters, and rugged coastline outlining an abundance of green, it’s no surprise many of the three million Scandinavian immigrants who arrived in the United States decided to settle on the index finger of a peninsula in what is now called Door County, Wisconsin.

This place had serious appeal to Scandinavian immigrants, as it looked and felt a lot like home.

And today, it tastes a lot like Scandinavia, too.

Door County’s fish boil is a full-sensory dining experience, attracting a steady stream of residents and hungry tourists on most summer evenings (and a smattering of winter ones, too). They gather in the grass and form human crop circles outside local restaurants with cinematically small town names such as Old Post Office and The White Gull Inn. This meal, made with fish caught right there in the choppy waters by men and women who likely have Viking blood coursing through their veins, is more than just a dinner. It’s dinner-theatre-in-the-round, a bit of Off-Broadway off-the-beaten-path in a darling part of the Midwest you likely have never heard of. While once it was little-known land, it’s now a bucolic vacationland, a “wish-you-were-here” postcard beckoning you to come hither and relax. But this peninsula was all about perseverance at the start.

The History of the Fish Boil

Feeding en masse was crucial to survival on this thin stretch of America in the 19th-century. Those hearty Swedes, Danes, and Norwegians needed an economical way to satiate a lot of workers fast as they harvested virgin forests by hand and built up new communities from scratch. The fish boil, a protein-rich dish made cheaply and quickly for many at once, would soon define the region’s cuisine and now, many years later, it still does. 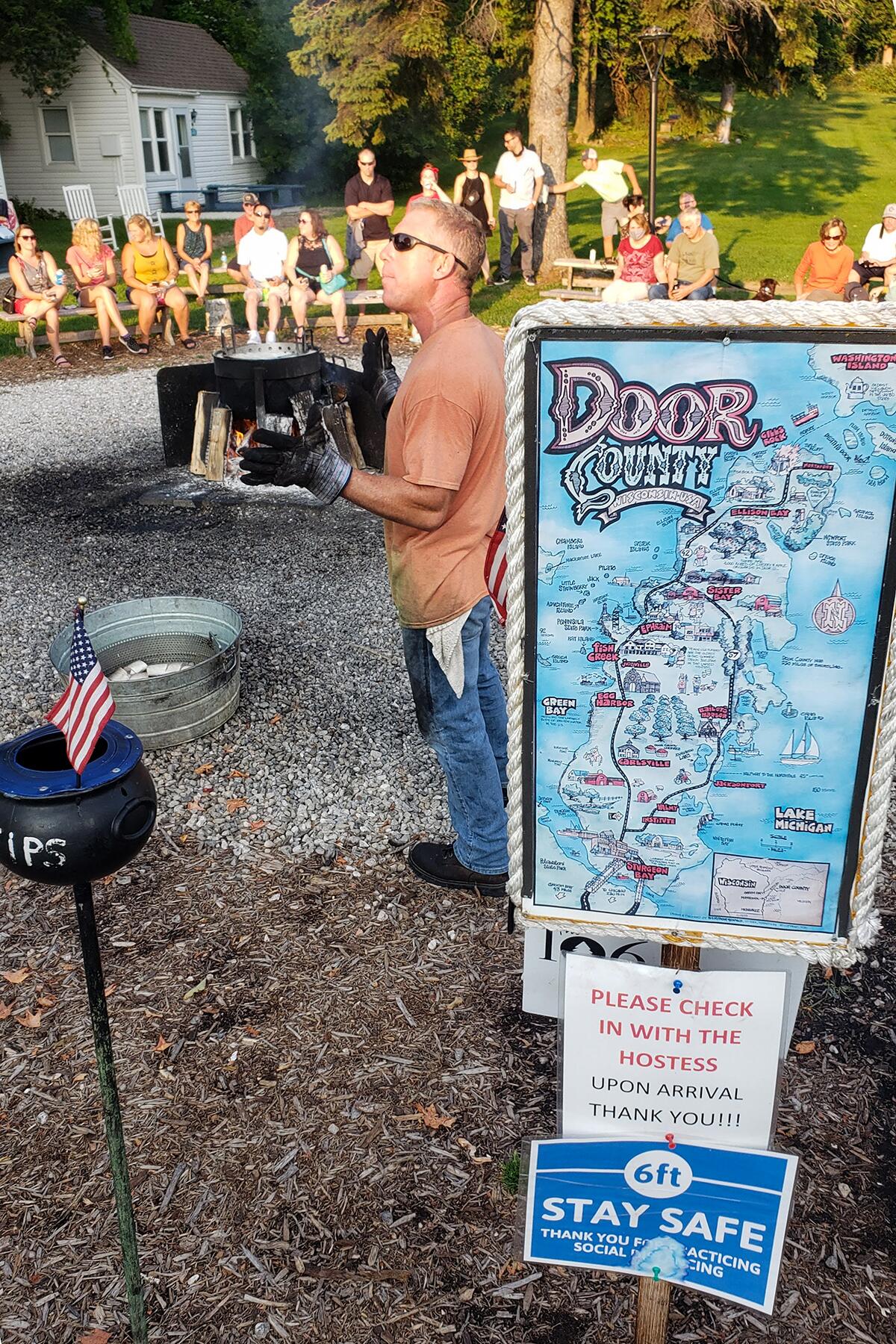 According to PBS Wisconsin, the Nordic immigrants who settled here brought with them their fondness for community, music, food, and alcohol. It’s these very same passions—good eats, togetherness, entertainment, and a warming drink—that still enrich the culture of the Midwest in the 21st century. And it’s exactly what makes the fish boil both the meal and the event that it is today.

Come rain, snow, hail, or sunshine, a fish boil starts outside. When the weather is right, it also ends in the fresh air. In this way, in this part of the world, the tradition is much like a barbecue, says Meredith Coulson-Kanter, Innkeeper of the White Gull, which has been hosting fish boils since the summer of 1959. At its core, she adds, it’s a fun way to entertain a large number of friends while sharing a local tradition and enjoying locally-caught and produced food. It’s made even more fun if the guests are experiencing it for the first time. Because not all locals have their own gear or know how to safely replicate this dish at home, it’s common to take out-of-towners to one of the half dozen restaurants offering fish boils.

I sadly can’t get back to Door County right now but, when I close my eyes, I still feel the warmth of the fire and taste every morsel of buttery deboned fish. Being a process nerd, I was hungry to learn how the fish boil works, from soup to nuts, or in this case, from hot kettle to cherry pie. So, I asked Ryan Krause, co-owner of the Old Post Office Restaurant in Ephraim, where I enjoyed my first, to walk me through every step. He was eager to share their method.

Krause starts with the star attraction. He says lake trout was once the popular main ingredient—before commercial fishing of the species was banned—but today, their 35-gallons of kettle water is teeming with Lake Michigan White Fish. This fish is the only one that can be caught commercially in numbers to sustain businesses specializing in this traditional meal. He adds that potatoes were also a staple food at the time the Scandinavians arrived, so they would have been in the mix, too, along with salt. Over the years, carrots, onions, corn, and more were added as people made their own mark on the dish.

Grab a Seat: It’s Dinner and a Show

And now that you’ve arrived at the boil, grab a beverage—maybe a Wisconsin-brewed Sprecher craft root beer as I did—and join other diners around a massive black kettle suspended over a roaring fire made from local ash, oak, maple, poplar, and soft cedar. Mouths are watering and the anticipation builds. The smell of hardwood acts as nature’s perfume, making you weak in the knees as the late summer sun reddens the back of your neck. A welcome bay breeze finds its way around the Edgewater Resort, fluttering patriotic bunting hung along Highway 42.

You nurse your drink and make small talk with strangers. Everyone is waiting for the water and three cups of salt to boil. The science and the show are about to begin. A brawny Boil Master nicknamed “Torch” wearing blue jeans and weathered leather gloves puts in the first of three wire baskets. It’s the largest and it’s full of red potatoes—two per guest (up to 125 at a seating). He sets a 30-minute timer. Depending on their size, pre-counted Spanish onions are added between 28 and 22 minutes in while the fish, forever the diva of the boil, join the party at the seven-minute mark. You can imagine those early settlers making every ounce of food count, and that tradition of rationing lives on. Nothing goes to waste at a fish boil. 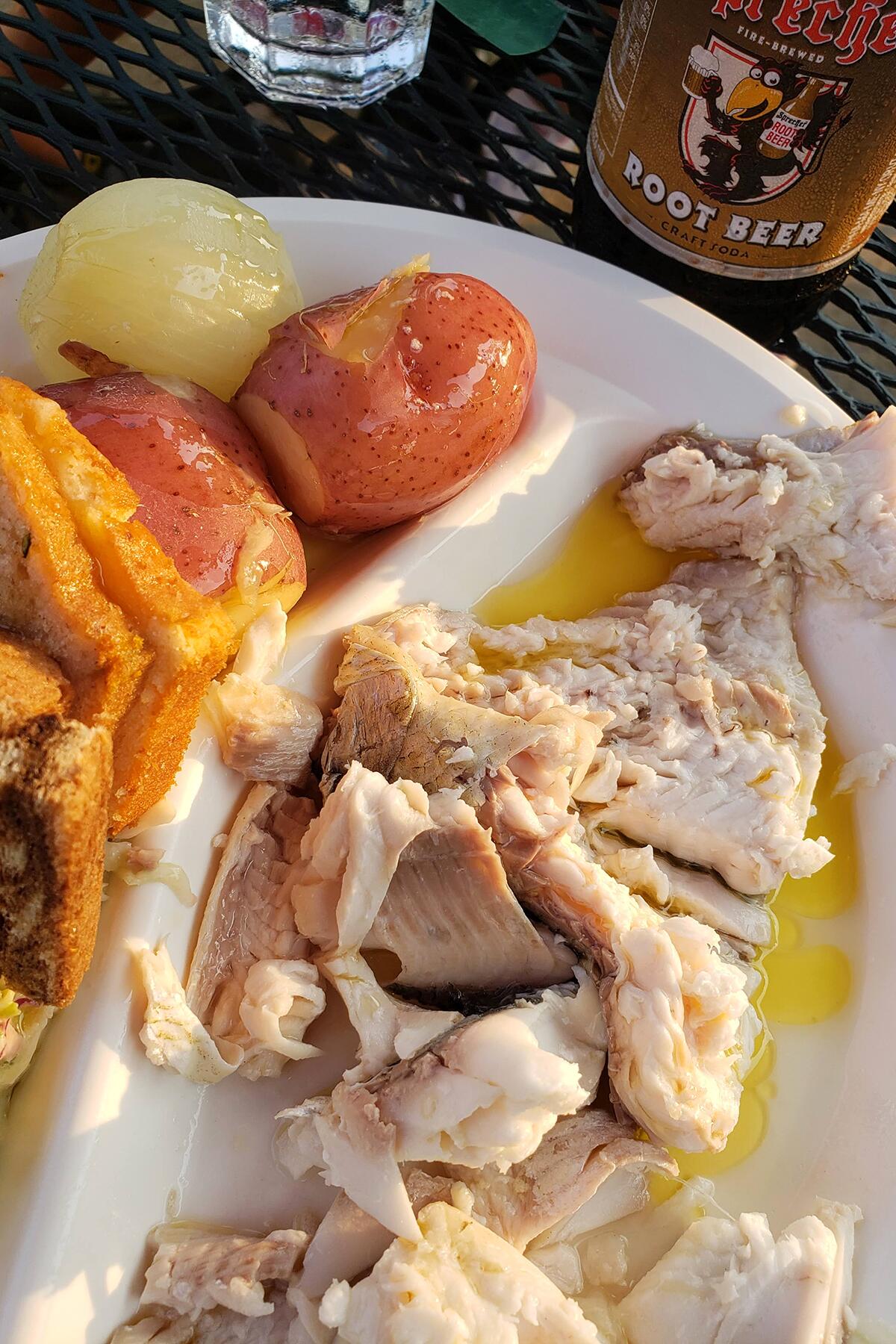 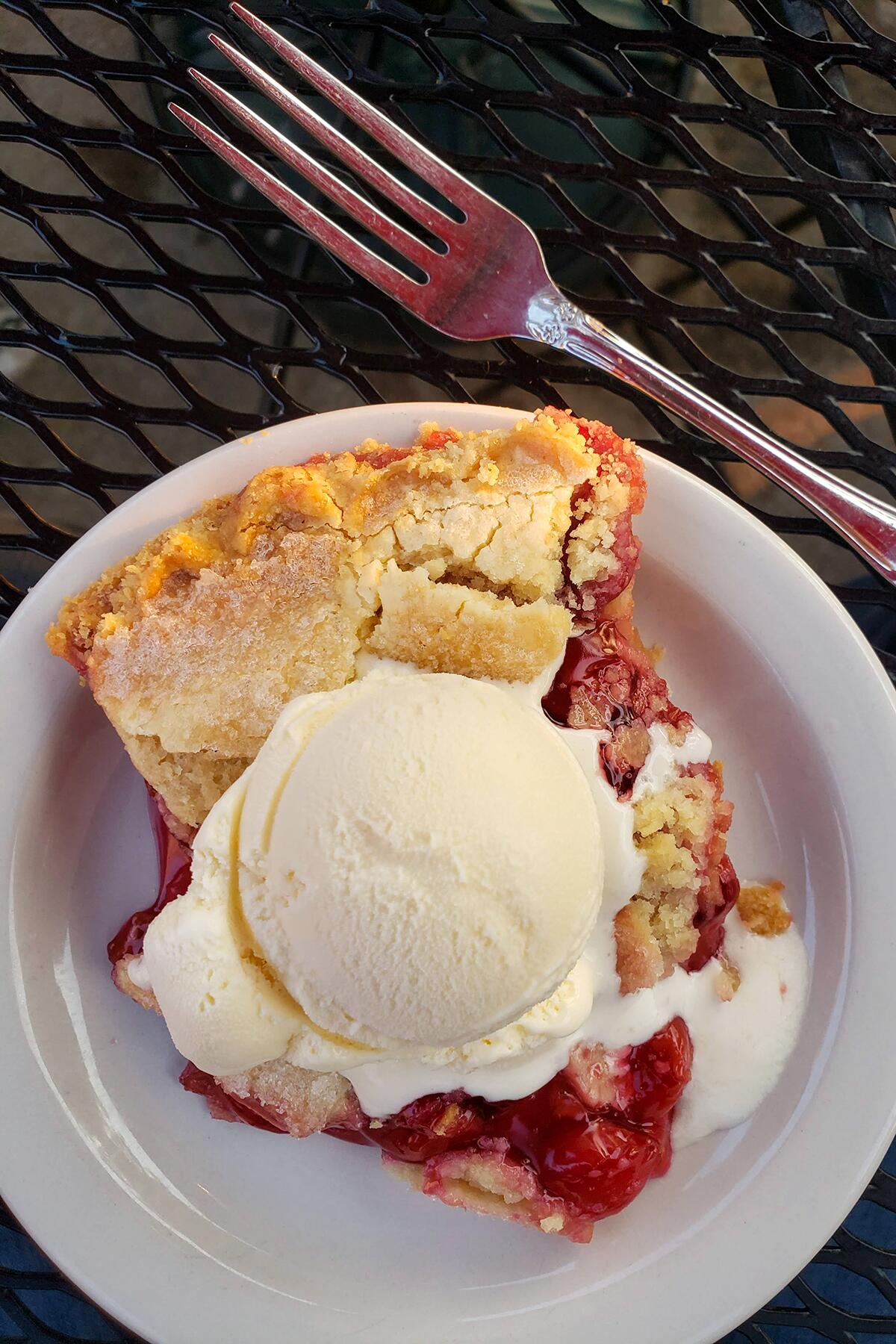 Throughout this half-hour, Torch tells stories of the sea, shares secrets of the boil, answers questions, and sprinkles in puns as liberally as salt. At the buzzer, kerosene is thrown onto the fire to flash boil the water, sending the surface foam created from ash and White Fish oil over the edge. This allows the food to be pulled away through clean water and gives the crowd their first prize of the night, a literal towering inferno reaching some 20 feet into the blue sky. Many photos and videos are taken and immediately shared on social media: Hashtag WHOA.

After the “boilover” is complete, the baskets are brought into the kitchen and everything is plated with homemade coleslaw, lemon wedges, an assortment of sweet breads and traditional rye, and hot drawn butter so heavenly it’ll keep your dreams warm throughout the harsh Wisconsin winters.

The fire was fun and your video is getting sufficient likes on Instagram, but here is why you’ve come to Door County: the fish and the community you’ve become a part of tonight.

You finish with a customary slice of local cherry pie and a scoop of ice cream. You finish with a wide smile, a full belly, and a better understanding of this unique place, its people, its history, and its fish boil.