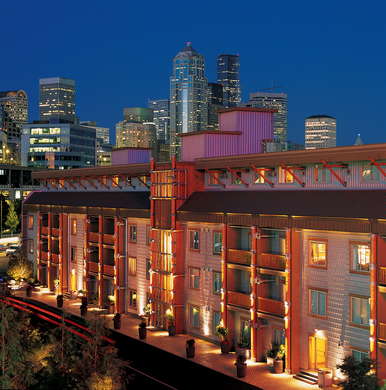 There’s something a bit magical about sleeping right above Elliott Bay. The Edgewater, which was built for the 1962 World’s Fair, is perched at the end of a pier. The best rooms look out on beautiful Puget Sound, with the tide gently lapping just below against the pilings. But all guests can enjoy the unbeatable view, which is framed by a bank of floor-to-ceiling windows aside a roaring fireplace in the hotel’s rustic-chic lobby.

The Edgewater, the city’s only waterfront hotel, is a local landmark most famous for hosting the Beatles in 1964 on their first world tour. At the peak of Beatlemania, fans were so determined to meet the band that the hotel had to install special fencing. Some even tried to swim across the bay. The Fab Four fished from their suite during their stay in Seattle, which was captured in a now iconic photo. Many other famous bands have stayed at the Edgewater, including Led Zeppelin, The Rolling Stones, David Bowie, and Willie Nelson.

The four-story, 223-room hotel on Pier 67 features a distinctly Pacific Northwest vibe, with accents of natural wood and river rock. All guest rooms include a gas fireplace, knotty pine furniture, crisp linens, and a European spa-style bathroom. Windows fully open to let in the salty sea air and guests in water-facing rooms can watch sailboats and ferries cross the bay; they might even catch a glimpse of a seal swimming just a few feet below.

YOU SHOULD KNOW Some guests are disappointed with the Edgewater’s entry-level city-facing rooms, which are on the small side, featuring a queen bed and unexciting views. The most deluxe cityside rooms feature Space Needle views, but this hotel is definitely a good place to splurge. 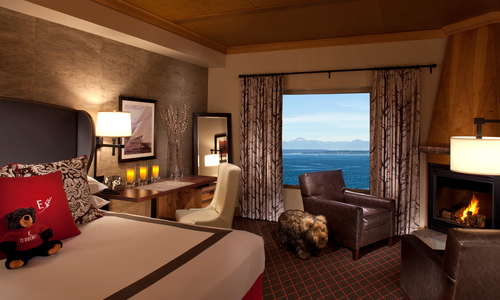 With natural stone tiles and deep burgundy walls, the bathrooms, which feature a walk-in shower, complement the worn-in masculine décor. In premium rooms, the large bathroom features a double vanity and a luxuriously deep claw-foot slipper tub. A shoji screen slides open to the room and view.

Edgewater’s lobby, with double-high windows that frame picturesque Elliott Bay, has the air of an upscale Pacific Northwest lodge--think wood accents, pine paneling, leather club chairs, and a statement-making stone fireplace. But really, it’s all about the views. 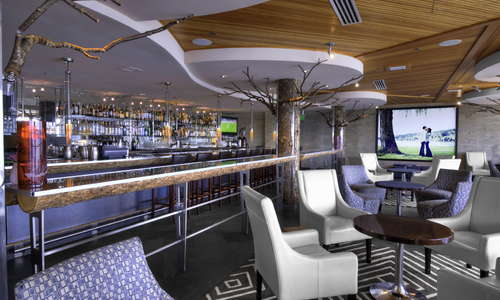 The hotel's 24-hour gym features cardio and Matrix weight machines, as well as a 30" flat-screen TV and towel service.

The hotel’s Six Seven restaurant also has breathtaking views from the much-in-demand outdoor patio and window booths. The comfortable dining room, which has an upscale woodsy vibe complete with tree columns, features dim lighting and a pleasant din when crowded. A seasonally inspired menu has a seafood emphasis. 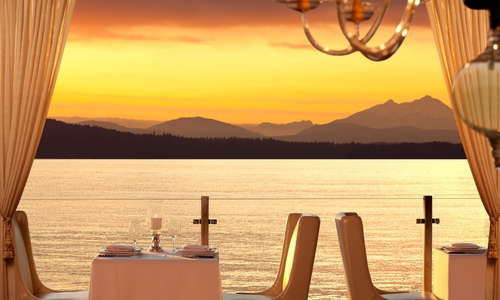 Six Seven's darkened lounge, which features comfortable bar seating, serves up small bites and a good selection of beer, wine, and house-specialty cocktails. Happy hour is 3 to 6 p.m. with no patio service.

An even better option is to enjoy drinks in the hotel's striking lobby. 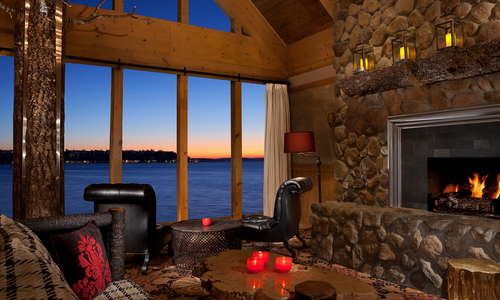 The Edgewater is not as centrally located as some Seattle’s Downtown hotels, but it offers a complimentary shuttle service to the Downtown corridor. At Downtown's Westlake Center, you'll find light rail connecting to Capitol Hill, the University of Washington, and Sea-Tac airport; the Monorail, which connects to Seattle Center; bus lines servicing every corner of the city; and the terminus for the South Lake Union Streetcar.

For a real treat, Macrina Bakery, a Seattle gem, has won international props for its baked goods. Just try to resist carbs when you smell their fresh bread. Rocco’s is a bustling pizza joint with a very well stocked bar, while Tavolàta, from celebrity chef Ethan Stowell, is all about the pasta.

Head to Belltown, about a quarter mile from Edgewater, for a bounty of drinking options. Popular spots include Bathtub Gin & Co, a speakeasy-inspired cocktail bar, No Anchor, which serves a solid selection of craft beer and tasty food, and Shorty’s, a Coney Island-themed dive bar with pinball machines.

As Seattle's only truly waterfront hotel, the Edgewater has unparalleled views from premium rooms. The lobby is striking, and the hotel's rustic-chic decor is very Pacific Northwest (guests love the teddy-bear footstools, which are available in a chic and well-curated gift shop with a coffee bar). The Edgewater's historic Beatles connection is a boon for rock 'n' roll aficionados--there's even a Beatles suite full of cool memorabilia. 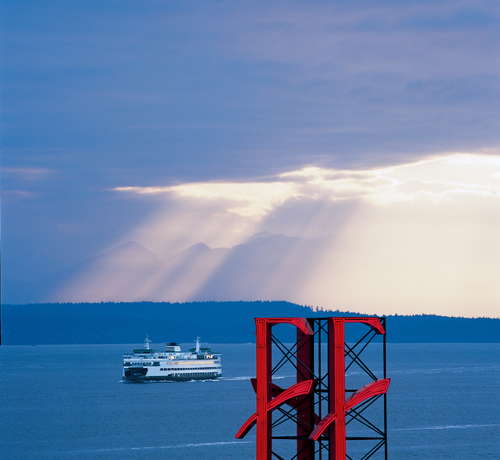 #2 9 Seattle Hotels With a Ton of Character

#2 Seattle's Most Incredible Hotels By The Water

#2 The 11 Most Luxurious Hotels in Seattle

#2 The Best Hotels with a Ton of Seattle Heritage

#5 The Most Charming Boutique Hotels in Seattle

#10 The 10 Most Romantic Hotels in Seattle 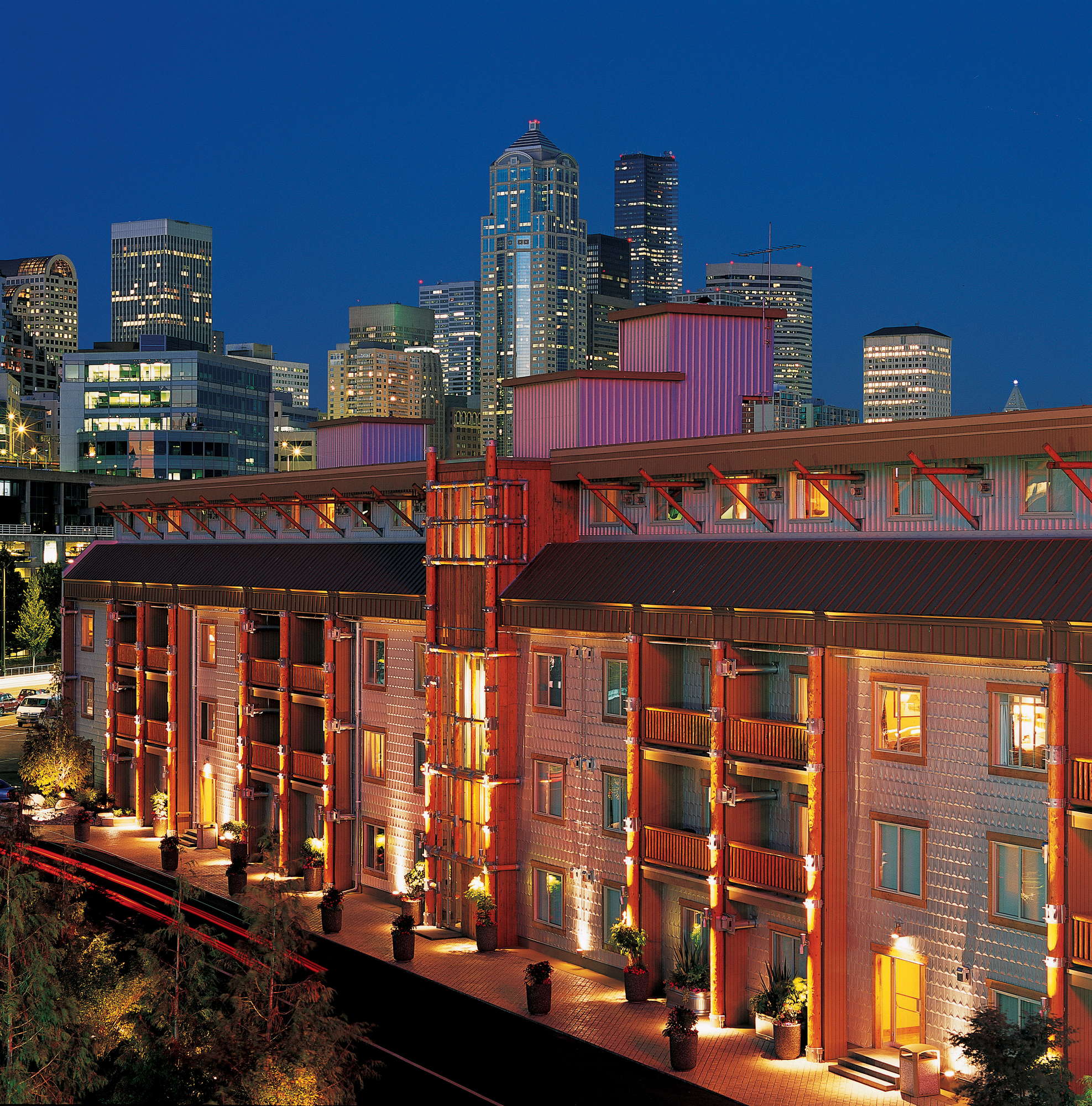 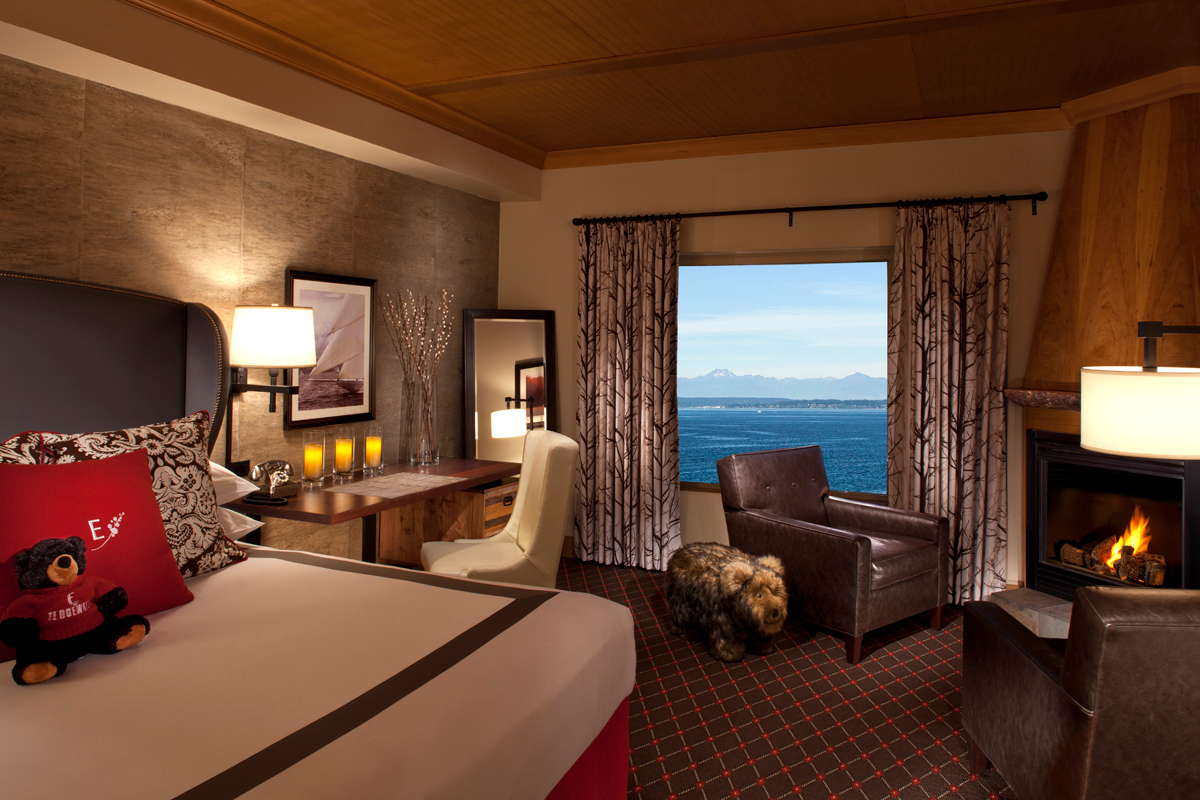 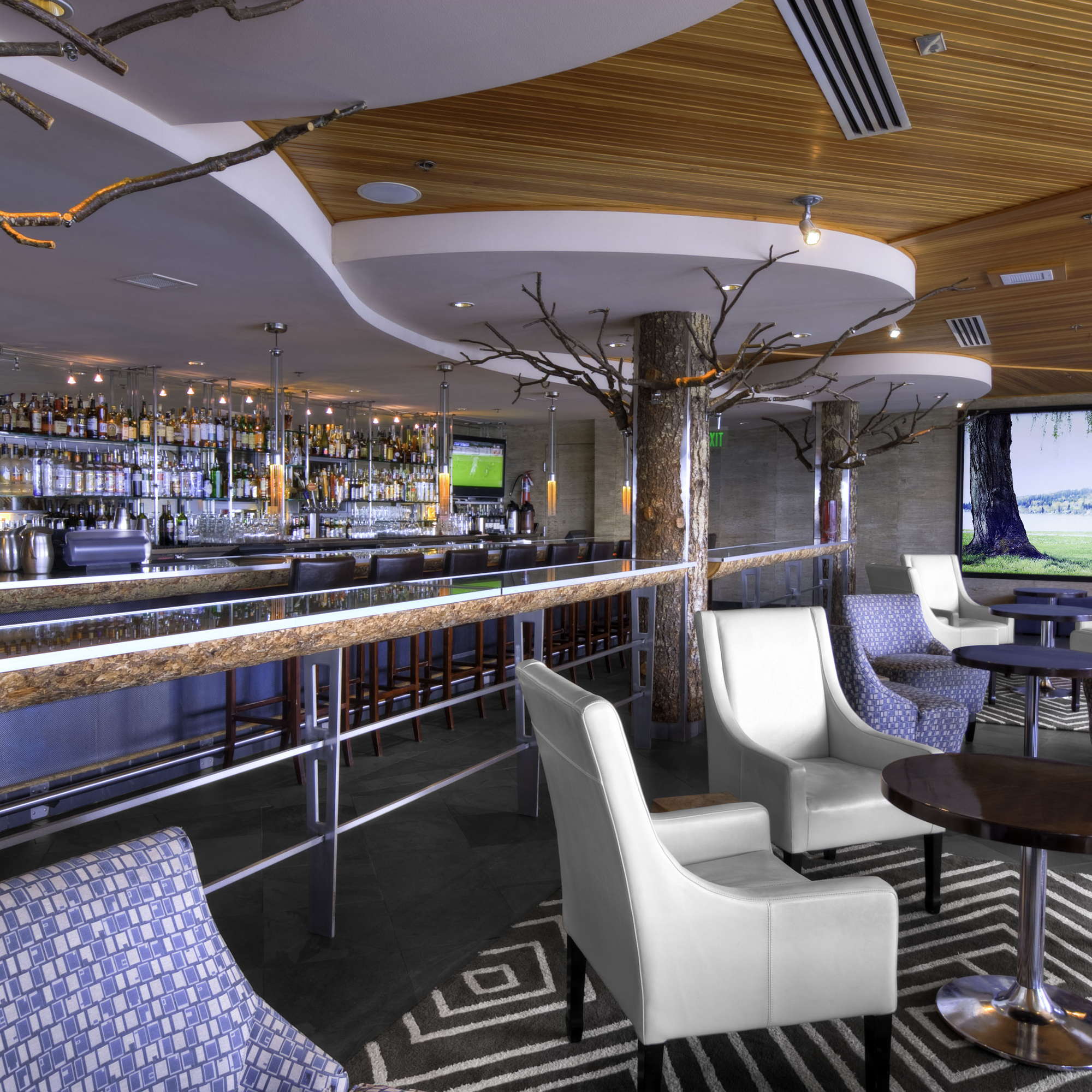 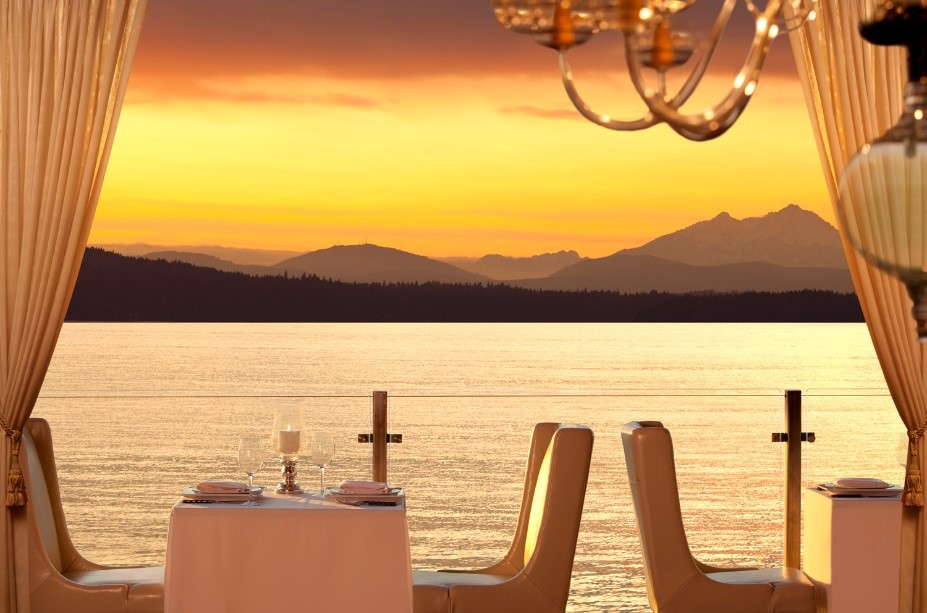 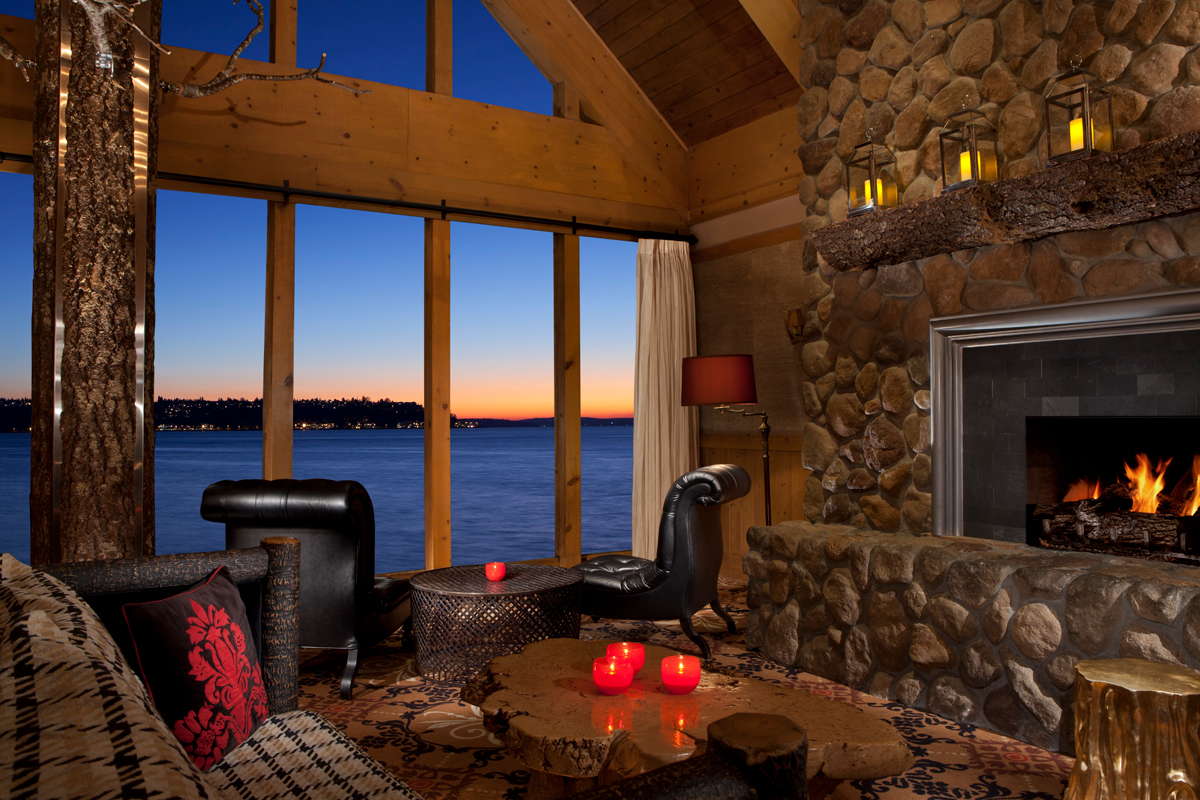