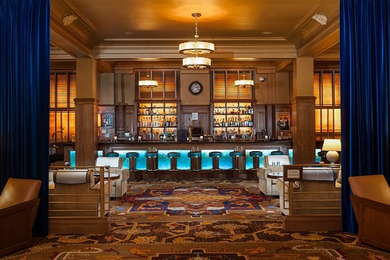 This meticulously kept hotel just steps from historic Pioneer Square exudes charm and character. The handsome nine-story Beaux-Arts building, famous for the terracotta walrus heads that line its third floor, was originally commissioned in 1916 as an HQ for The Arctic Club, a fraternal group of Seattle businessmen with Klondike Gold Rush and Alaska connections. A DoubleTree by Hilton hotel, The Arctic Club, pays homage to this past with an elegant design that calls to mind gentlemen explorers and old-world travel.

The neighborhood has many art galleries, and is also home to the famous Bill Speidel’s Underground Tour, a humorous walking tour about the city’s early history, including toilet jokes and yarns about ladies of the night, or “seamstresses.”

High-ceilinged guestrooms feature campaign nightstands and dressers, natural leather club chairs with nail head trim, and pictures of native Alaskan Inuits taken by famed photographer and ethnographer Edward Curtis, an early member of The Arctic Club. Beds are supremely comfortable and draped with a khaki monogrammed blanket, another nod to the men’s club theme. Large windows look out on city views, including Smith Tower, at one time the West Coast’s tallest building.

YOU SHOULD KNOW Wi-Fi costs extra, but it's free if you join the hotel's Hilton Honor rewards program.

Classic details like hex tile, custom floral wallpaper, and a dark wood vanity topped with marble conjure the early 20th century. Depending on the room, bathrooms--on the smaller side but smartly laid out--feature a walk-in shower, a tub-shower combo, or a whirlpool tub with a rain showerhead.

The building’s beautiful neoclassical architecture deserves admiration, as does the décor. In the hotel foyer, which boasts marble floors, stately columns, and soaring ceilings framed in intricate molding, black-and-white portraits of explorers hang in neat rows. The dimly lit lobby living room features plush chairs, sofas, and leather benches arranged in cozy clusters around tables. Dark wainscoting and a substantial stone-and-wood mantel surround a fireplace, which is flanked by a pair of crimson velvet armchairs. The hotel’s eye-catching Polar Bar is a focal point--as is the tall illuminated polar bear in the corner. Do not fear--he is not real. You are safe.

Save room for a snack at check-in, where guests are given a delicious warm chocolate chip cookie.

A keycard access fitness center is open 24 hours and is equipped with new Precor fitness equipment, including free weights, medicine balls, and more. All elliptical machines and treadmills include built-in video screens.

Adjacent JUNO restaurant serves simple and seasonal New American fare. It’s not the best restaurant in the area, but perfectly serviceable for a bite to eat.

Parted royal-blue velvet draperies hang from the high ceiling, framing the beautiful Polar Bar. The front of the bar features illuminated white panels with swirls of gray and Arctic blue, like a glacial landscape viewed from a floatplane high overhead, and complements a handsome pool table with a bright blue felt. An illuminated lifelike polar bear sculpture towers in the corner, the perfect mascot for the Arctic Club.

YOU SHOULD KNOW We need to reiterate: the polar bear is a statue. Everything is fine. Enjoy your drink, safe from attack.

The Arctic Club is right across the street from a Link light rail station, with service to Capitol Hill, University of Washington, the airport, and nearby Westlake Station (a 20-minute walk from the hotel), which is one of the city’s main transit hubs. Here you can connect with buses, the Monorail, and the South Lake Union Streetcar.

A couple of blocks from the hotel, Il Corvo (7-minute walk) is a tiny spot serving two or three handmade pasta options on the menu a day; the lines can be long, but the turnover is fast--no grabbing a table until you’ve ordered though. The famous Salumi Artisan Cured Meats (7-minute walk), owned by Mario Batali’s dad, is another place with a perpetual line out the door for sandwiches that are well worth the wait. At night, downtown offers numerous options, including well-known spots at Pike Place Market like Place Pigalle (15-minute walk), a French place with water views, and Matt’s in the Market, a bustling midrange restaurant--also with Elliott Bay views--that serves seasonal Pacific Northwest cuisine (make a reservation!).

When it comes to tippling, choices abound, from the kitschy--Flatstick Pub (7-minute walk), a warehouse bar with indoor mini golf, mountain murals, and a solid beer and cider selection--to the classy--Good Bar (7-minute walk), a boldly modern take on a historic space serving craft cocktails and refined bar bites. Also worth a visit: Damn the Weather (6-minute walk), a gourmet gastropub with great beer, wine, and cocktails.

A boutique hotel paying elegant homage to the Klondike gold rush that defined early Seattle, the Arctic Club's explorer-chic style will delight both history and design buffs. It's located across the street from a light rail station, which makes getting around a cinch. And the hotel's Polar Bar is one of the most elegant in town. 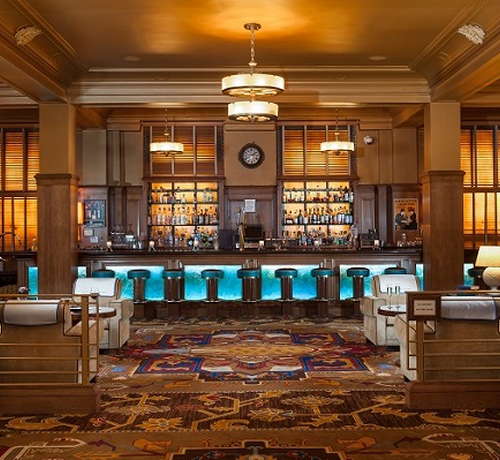 #1 The Best Hotels Near Pioneer Square in Seattle

#2 6 Hotels Near Seattle’s Most Beautiful Gardens and Parks

#5 The Best Hotels with a Ton of Seattle Heritage

#8 The 10 Most Walkable Hotels in Seattle

#9 9 Seattle Hotels With a Ton of Character

#10 The 11 Most Luxurious Hotels in Seattle

#10 The Most Charming Boutique Hotels in Seattle