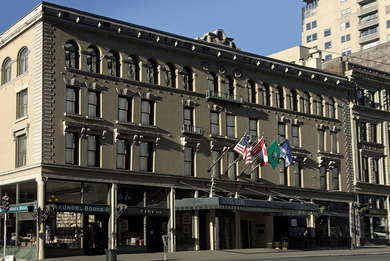 Two historic buildings near the waterfront feature exposed brick, walls of windows, and nouveau-baroque accents to appeal to aesthetes and modern romantics. Alexis’ eclectic style nods to a bygone era while amenities include high-tech touches like Amazon Echo Dots in rooms and a cutting-edge gym. The hotel’s charming Bookstore Bar is one of the city's favorite hideaways—whiskey aficionados should check out their impressive selection, including flights.

Alexis is part of the stylish Kimpton brand. Sign up for the hotel's Karma Rewards program for free Wi-Fi and a $10 voucher for in-room snacks or booze. The hotel also hosts a complimentary daily wine hour.

Ornate upholstered headboards, rococo gold mirrors, and black leather chairs pair perfectly with the hotel’s original architecture, which dates to 1901, while stainless steel accents, quirky lighting, and modern artwork keep it current. A soothing palette of browns, creams, and light blues is enlivened by pops of red and royal blue. The hotel’s specialty suites include features like exposed brick walls and contemporary four-poster beds. The Fireplace Suites are especially chic, with a wood-burning fireplace and a private bedroom tucked behind glass French doors, while the SAM Suite features a rotating selection of artwork from the Seattle Art Museum handpicked by a curator.

Historical tidbit: In the early 90s, the Sultan of Brunei decided to move into Alexis for a few months. He booked the entire hotel, redecorating his suite to his liking, and generously tipped the entire staff when he moved out.

YOU SHOULD KNOW Some of the rooms have a den-like vibe, meaning they’re low on natural light, despite the large windows. 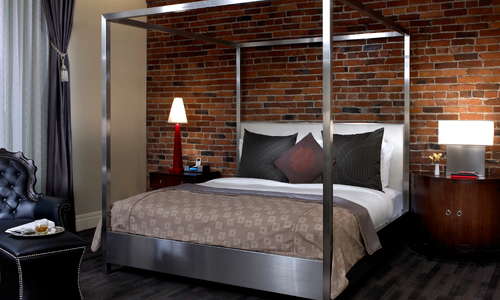 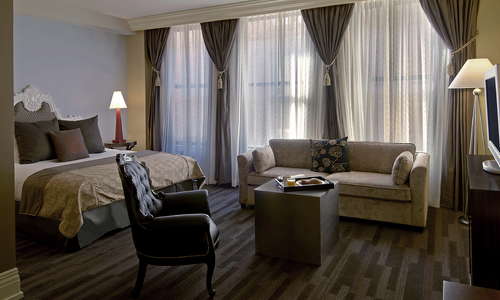 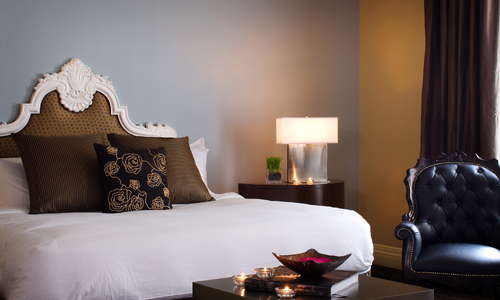 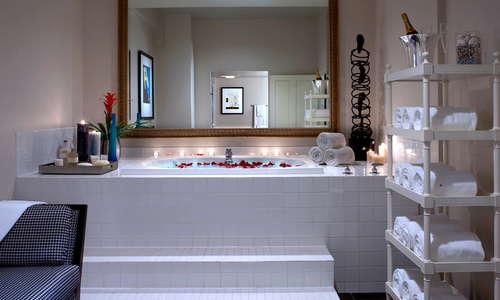 With soaring ceilings and substantial crown molding, the Alexis lobby is a standout. Behind the dark wood check-in counter, a shimmering panel of glass is backlit in a subtle violet hue, complementing the lobby’s eye-catching contemporary chandeliers and unique artwork. The accent color carries through in the baroque flourishes on a lovely rug, and in comfortable seating areas with chic chairs and sofas upholstered in a mix of classic and modern patterns. 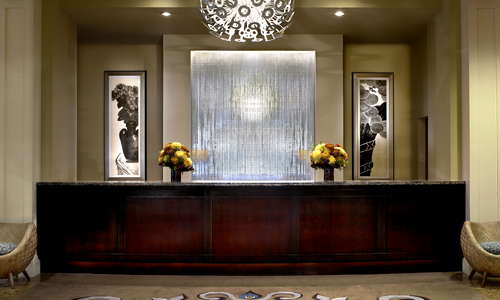 Treat yourself to the tranquil Chroma Spa in person for spa and salon services, or arrange for a relaxing in-room experience.

The hotel's stylish gym has won national props from magazines and pro athletes for its offerings, which include monkey bars, a bouldering wall, rings, free weights, cardio machines and more.

The Bookstore Bar & Café looks exactly as you’d imagine – a worn-in spot with dark wood, moody green walls, and built-in shelves lined with books. On one side, gooseneck fixtures provide soft lighting above an exposed brick wall and a long tufted banquette and. Other booths in the eatery feature charming library table lamps. Open from breakfast through dinner, with brunch on weekends, the Bookstore serves a menu with simple but tasty fare, like wild salmon and a Mad Hatcher half-chicken. The burger is a messy hit, dripping with secret sauce and cheese on a locally baked sesame bun.

The bar part of Bookstore Bar & Cafe serves up strong cocktails with an emphasis on whiskey. The intimate space feels like it's been there for as long as the building, especially the floor-to-ceiling built-in bookcase with a library ladder.

It's a short walk to the Pioneer Square Link light rail station; the light rail connects to Capitol Hill and the University of Washington, as well as Sea-Tac airport. The Westlake light rail station (a 15-minute walk from the hotel) is a hub where you can connect with the Monorail, which goes to Seattle Center, the South Lake Union Streetcar, and buses that head to every corner of the city. The hotel also offers complimentary bike use, or rent one of Seattle's bike-share program bikes; the pilot program uses an app and lets you leave them wherever (they're fairly easy to find).

The European-inspired Lescocho (4-min walk) serves up seasonal American fare in a stylish space with gleaming dark wood and views of Elliott Bay to die for (or at least vie for). Classic steakhouse enthusiasts should try the Metropolitan Grill (5-minute walk), a refined local favorite.

Stroll over to Pike Place Market (7-min walk), where you'll find a variety of drinking options. Inside the market, Radiator Whiskey is a popular choice; often packed with a mix of locals and tourists, the spot is known for its namesake whiskey selection. Tucked in an alley by Seattle's infamous Gum Wall, check out the Alibi Room, a dark pizza spot with a lively bar. If you're a craft beer aficionado and don't mind a spartan, extra-small taproom, locals rave about Cloudburst Brewing (15-min walk).

While many hotels have gone decidedly modern with the decor, Alexis embraces a more romantic vibe, with nouveau-baroque accents that complement the historic hotel's unique architectural elements. The rooms are invitingly cozy, especially when Seattle is drizzly, and feature convenient modern amenities like the Amazon Echo Dot. Close to the waterfront in an especially walkable part of Downtown, Alexis is also near several public transit options. 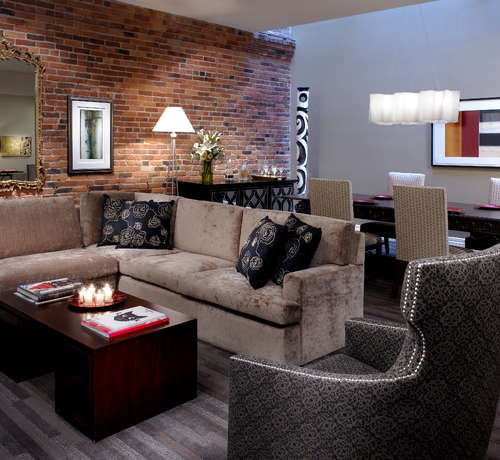 #1 The Best Hotels For a Great Night Out in Seattle

#2 The Best Hotels Near Pioneer Square in Seattle

#3 The 11 Most Luxurious Hotels in Seattle

#5 The 10 Most Romantic Hotels in Seattle

#6 The Best Hotels with a Ton of Seattle Heritage

#8 Seattle's Most Incredible Hotels By The Water 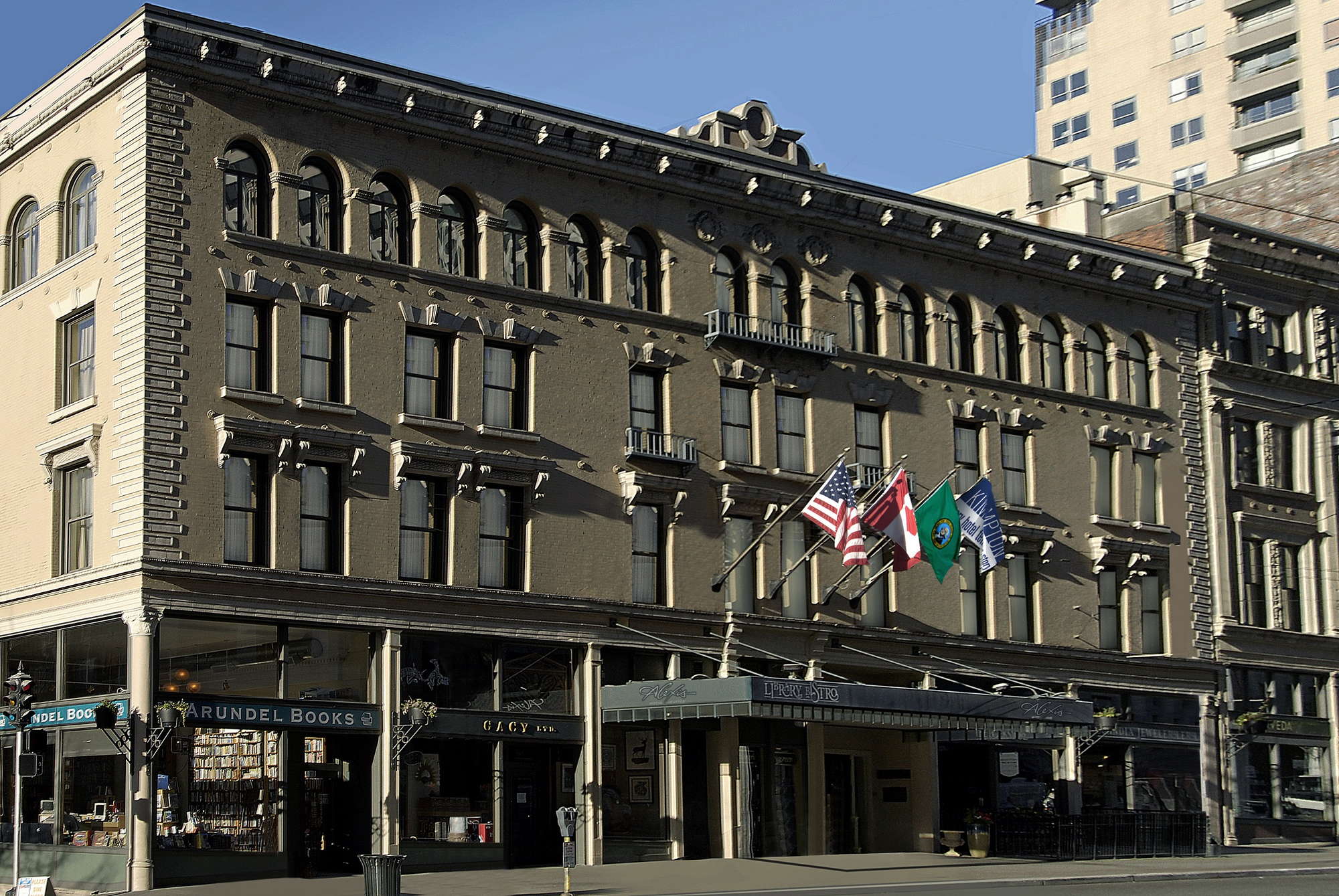 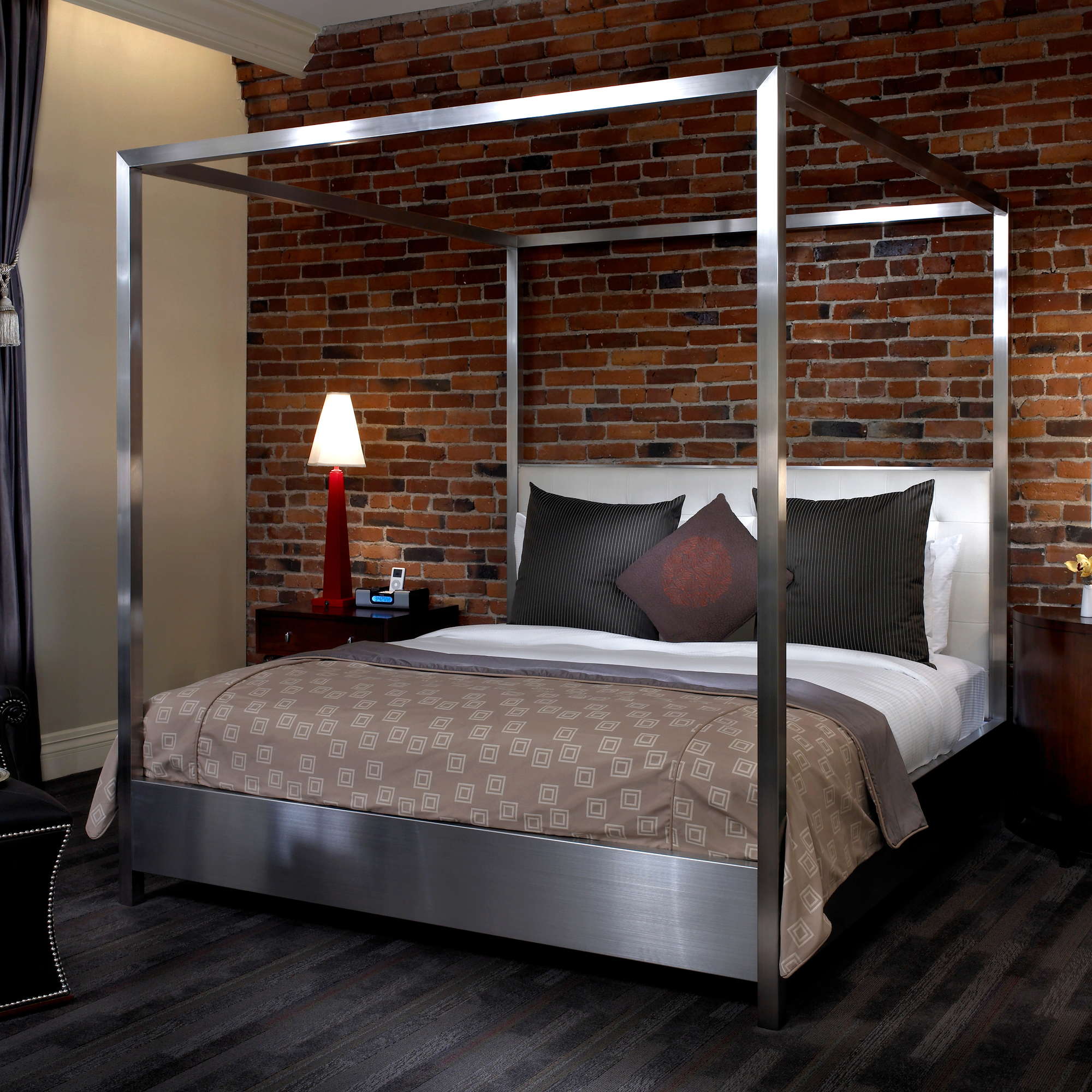 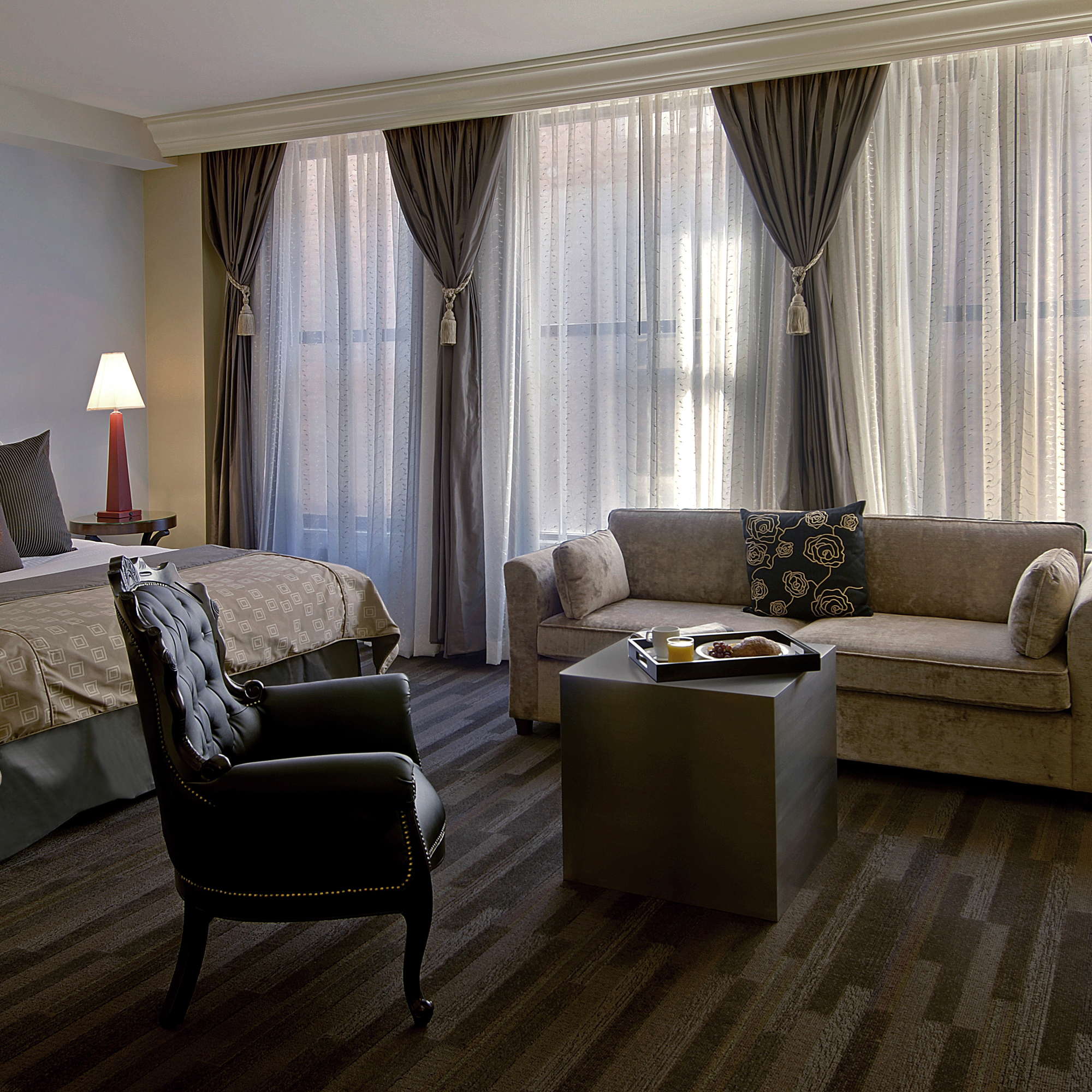 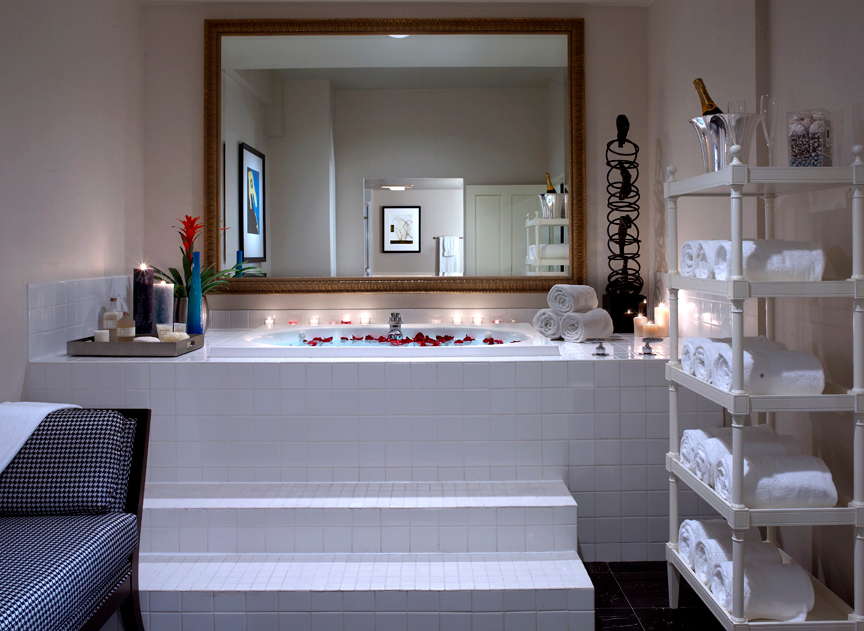