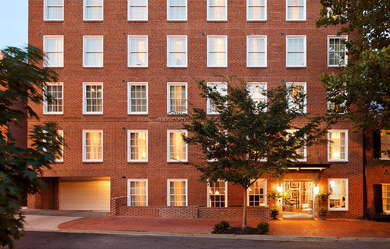 A chic, modern, newly renovated boutique hotel in historic Georgetown, the Graham is a true hidden gem. Touting personal service, sleek, airy rooms (32 of 57 are suites), and two noteworthy bars, it’s the perfect retreat for leisure and business travelers alike. Fido will be pampered, too.

YOU SHOULD KNOW It doesn't hit you over the head, but subtle hints throughout the hotel honor its namesake, inventor Alexander Graham Bell, who once worked right up the street.

At first glance, the guest rooms are simply sleek and modern, with a neutral palette accented with touches of red and blue. But on closer look, you'll see the brilliant interplay of different design elements, from the custom Spanish tiles in the bathroom to the different walls painted different colors to the gray-checked carpeting. And then there are the super comfortable beds, with white leather headboards (no duvet here; they use the three-sheet system); the state-of-the-art Bluetooth USB technology, which does everything but cook you breakfast; and the ever-so-tempting Dean & Deluca treats in the mini bar. It's the details that count, as they say. 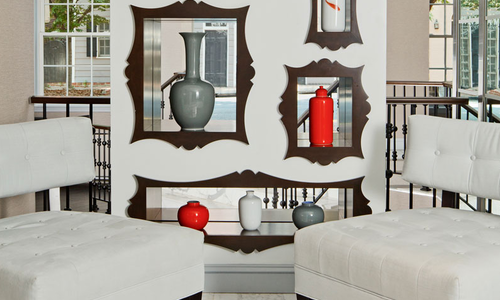 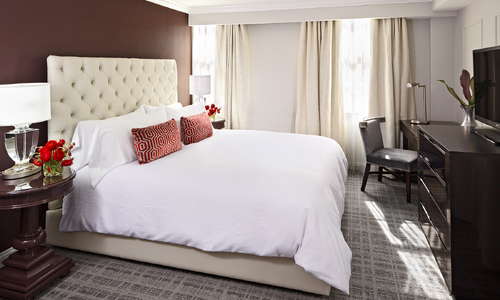 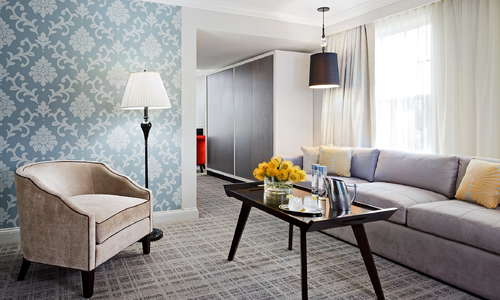 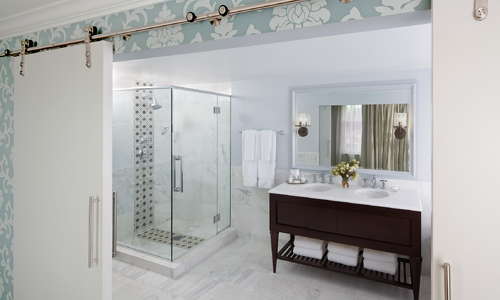 The lobby is small, but there’s a cozy corner with a gas fireplace and golden chandelier to linger awhile. There’s also a sofa in a separate seating area to wait for a friend or a cab. 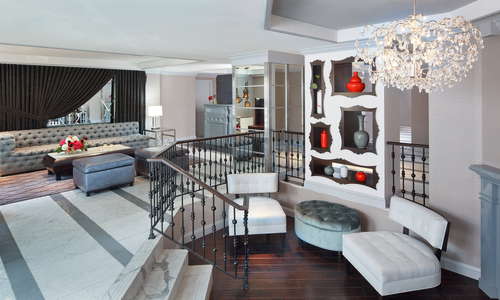 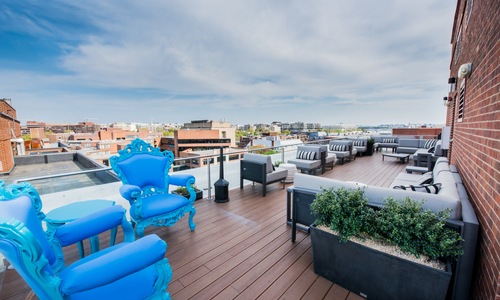 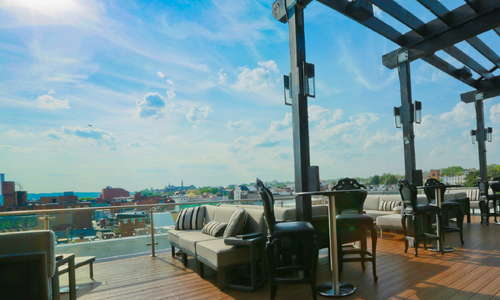 There’s no spa on the premises, but guests enjoy the one across the street.

The small, dark fitness room has a bike and weights; there’s no treadmill, out of courtesy of the adjacent guest room. The good news is, runners can head out on the C&O Canal towpath just out the door. There’s also a gym and yoga studio nearby, open to walk-ins.

There is no restaurant, but you can get small bites at the two bars. Breakfast is served at the Alex. 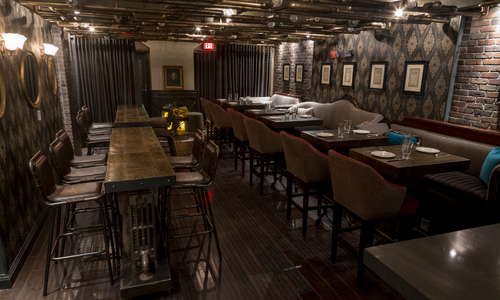 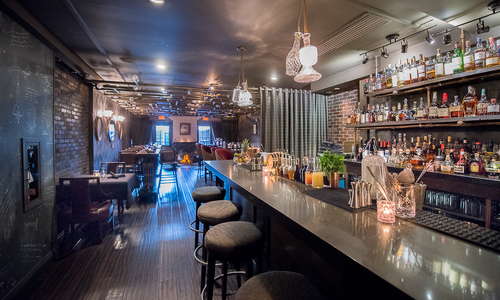 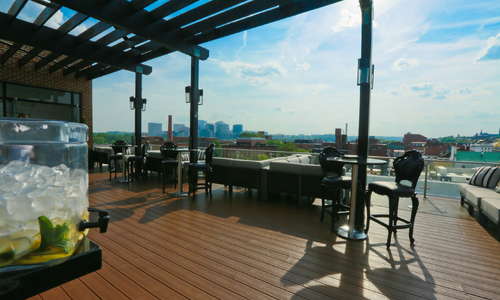 This hotel excels in its bar space, to the point that locals stand in long lines to get in (hotel guests can move to the front of the line). The Alex Cocktail Bar & Speakeasy, downstairs, looks every bit like a 1920s speakeasy, with its dark woods and Victorian-esque wallpaper. It’s named after Alexander Graham Bell, with sketches of his inventions on some walls; on another wall, you’ll find portraits of Mr. and Mrs. Graham themselves. But the main reason people come here is for the craft and classic cocktails, along with its jazz series on Saturday nights and Havana Nights parties on Thursdays.

The open-air (seasonal) rooftop bar, the Observatory, has a completely different feel, with modernesque sofas and chairs and astounding views overlooking historic Georgetown and D.C. beyond--especially breathtaking at night.

Challenge the bartender at the Alex to design a cocktail especially for you, then have it entered into the “phone book” of personalized cocktails. 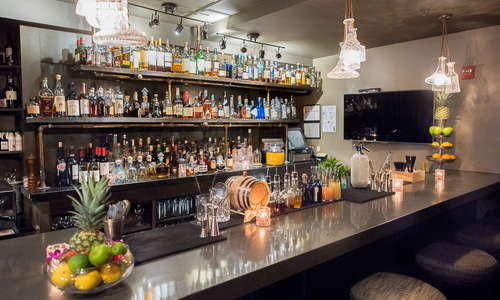 The Graham is located on a side street in the heart of Georgetown, with some of the city’s best shops, restaurants and bars just a short walk away. In the other direction, you’ll come to the Georgetown Waterfront and its restaurants and bars, overlooking the Potomac River. To travel beyond the neighborhood, you’ll need a cab. Metro is not a good option--the Foggy Bottom–GWU is a 10-block walk.

Ian the doorman is known by neighborhood dogs, who tug at their owner’s leashes to come say hi (and get a treat). That’s the kind of place the Graham is, friendly and welcoming, with all the class in the world. We don’t know which bar we like better, the Speakeasy or open-air rooftop bar (one of D.C.’s first). They're both worth coming back for. As is the Graham itself. 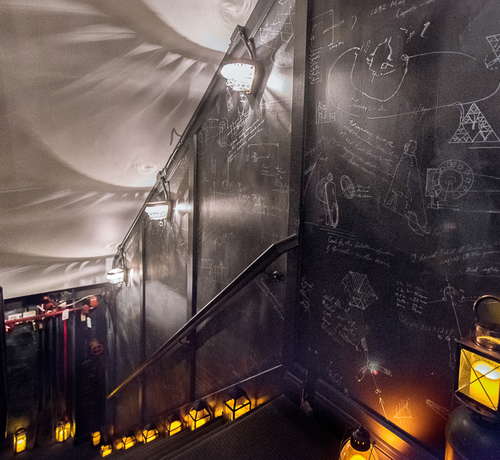 #1 The Most Whimsical Hotels in Washington D.C.

#3 Hotels in Washington D.C. That Are Total Hidden Gems 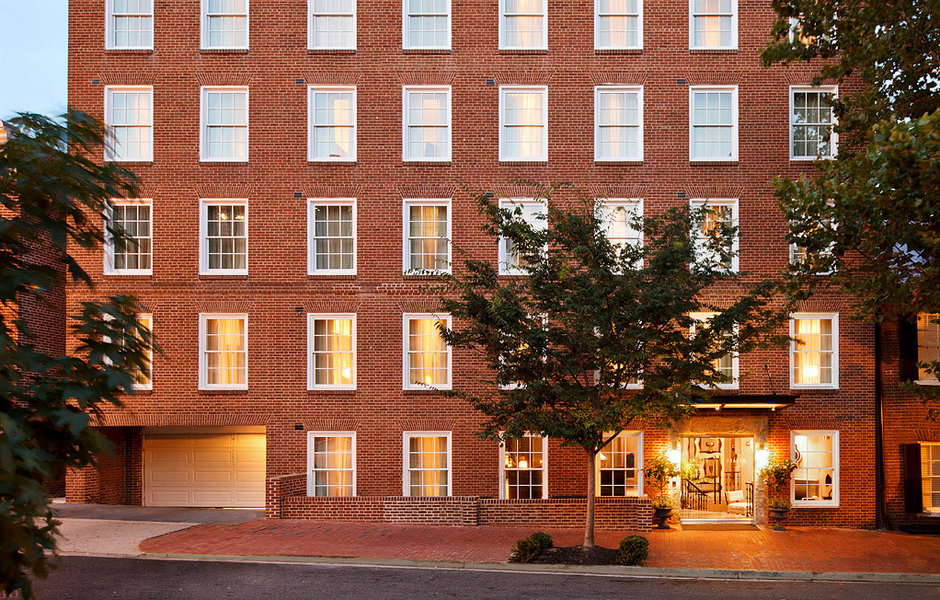 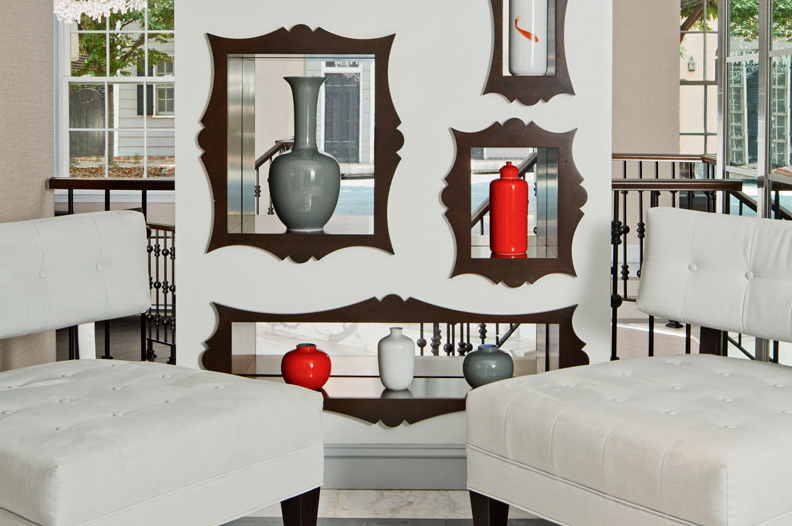 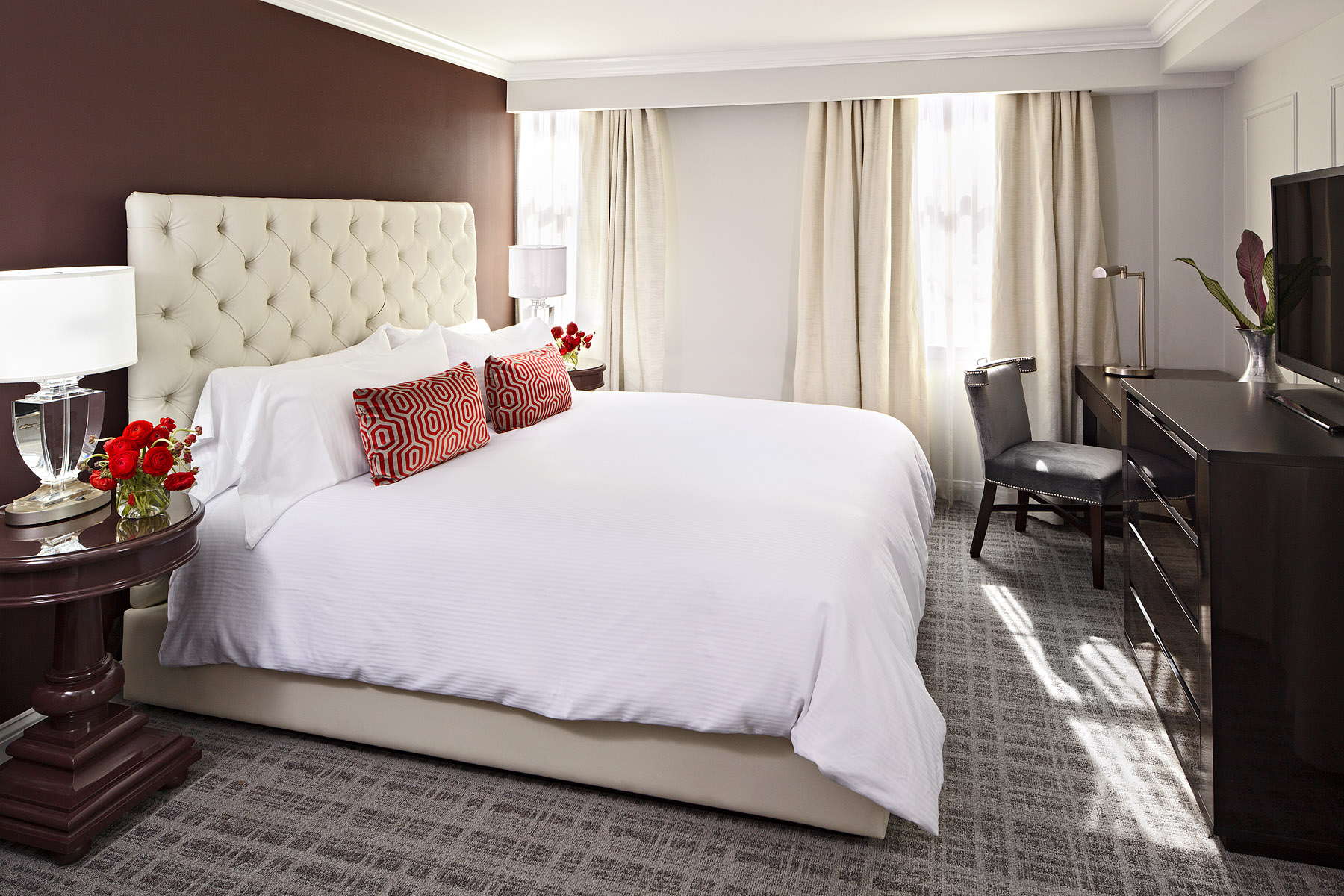 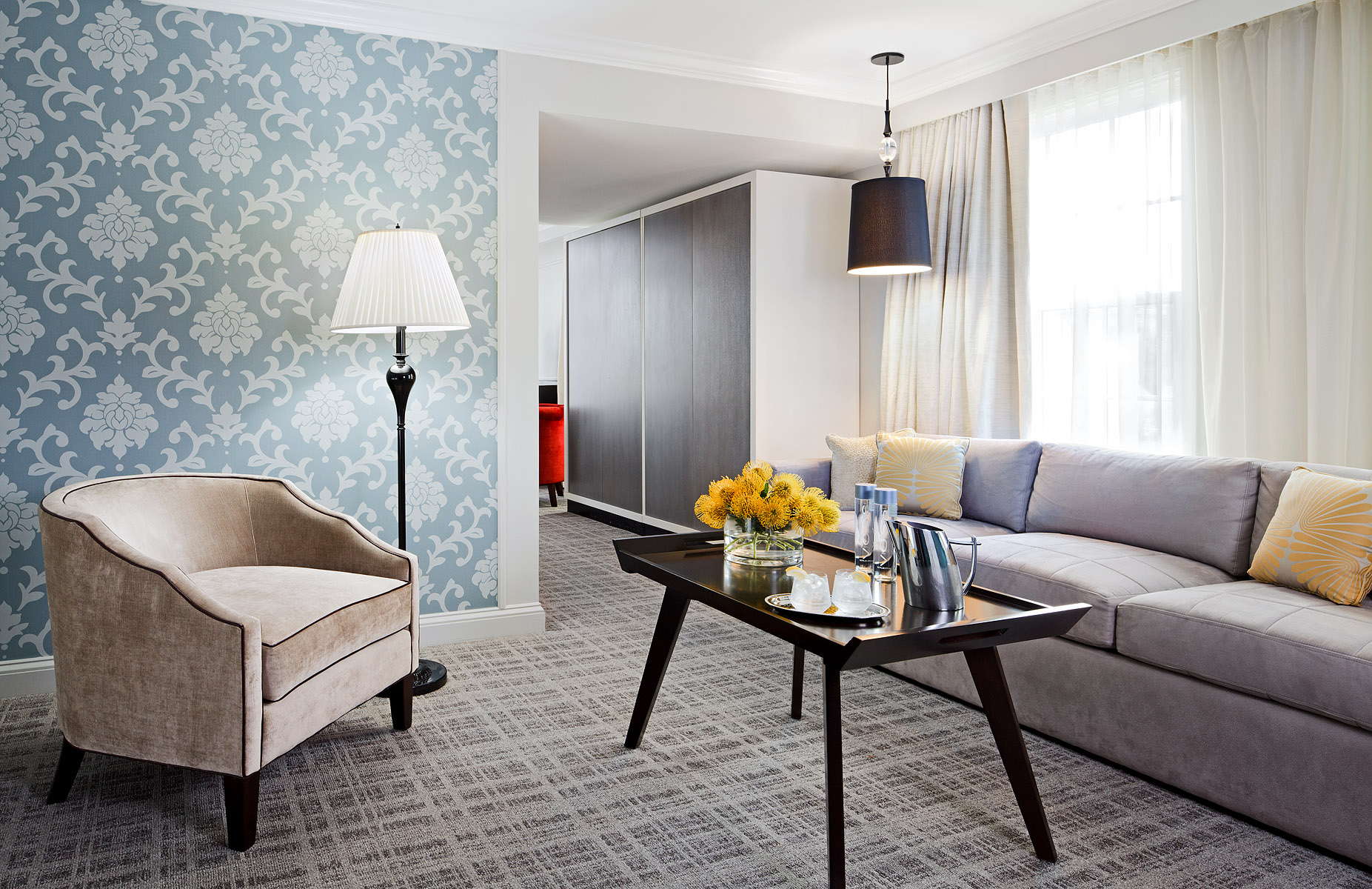 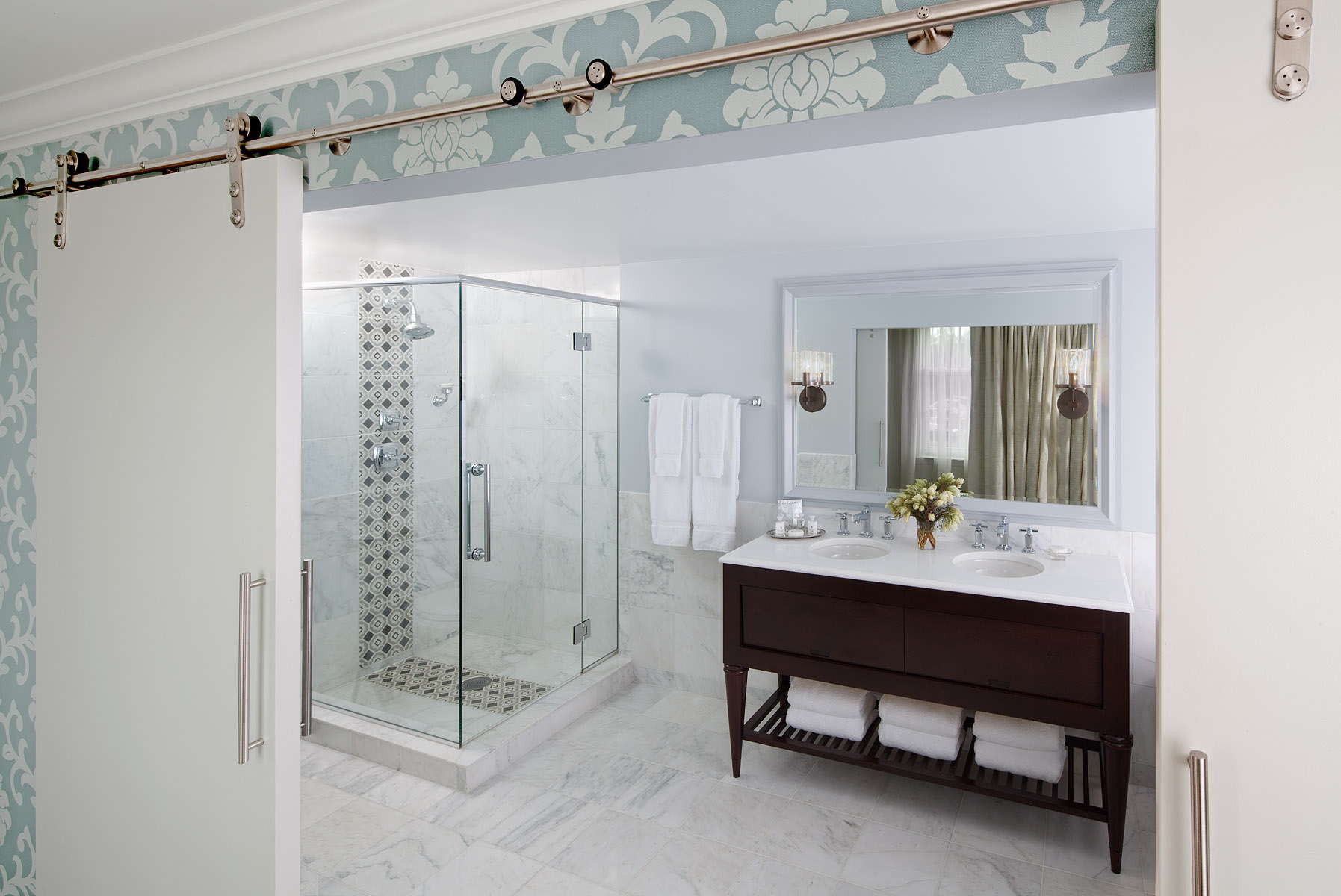 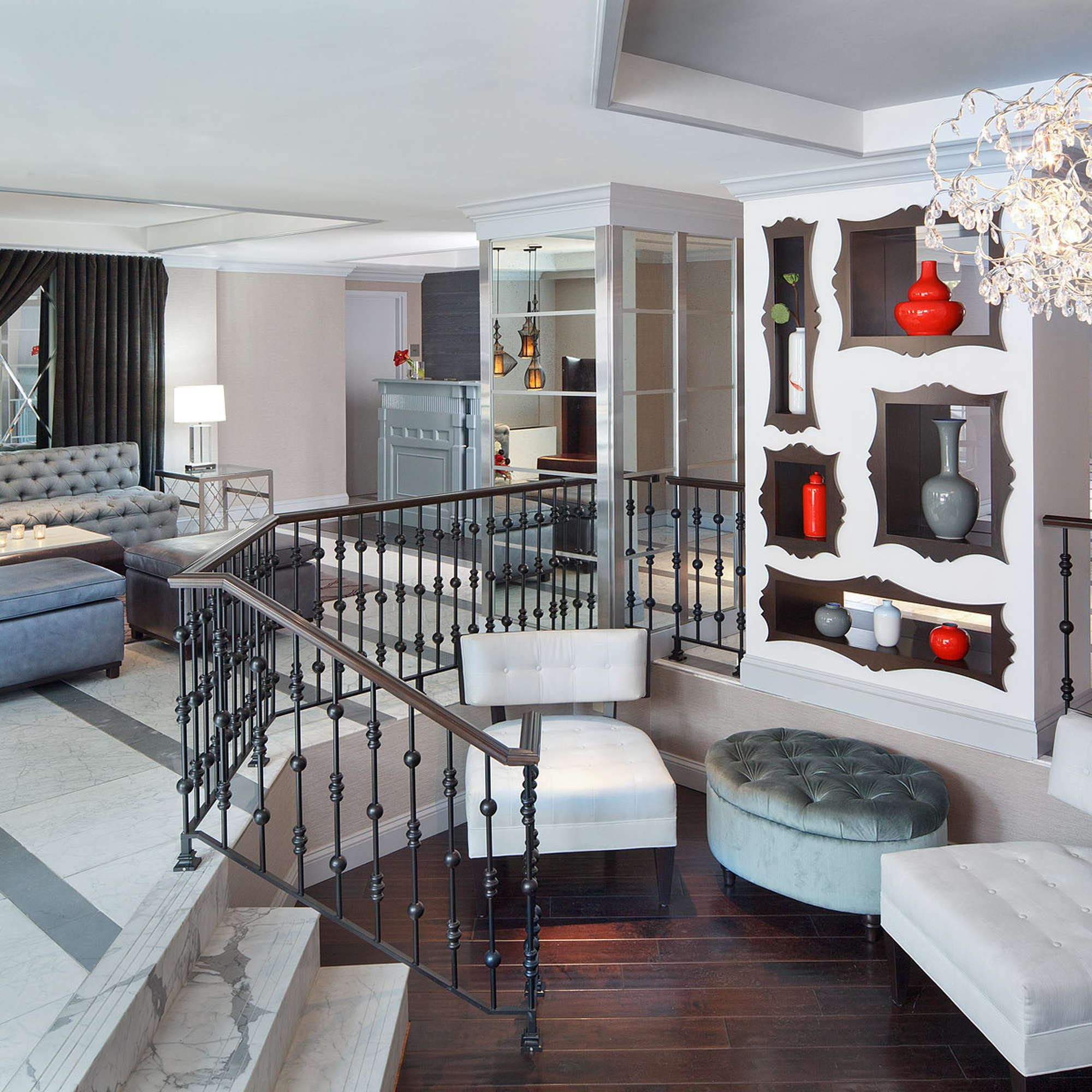 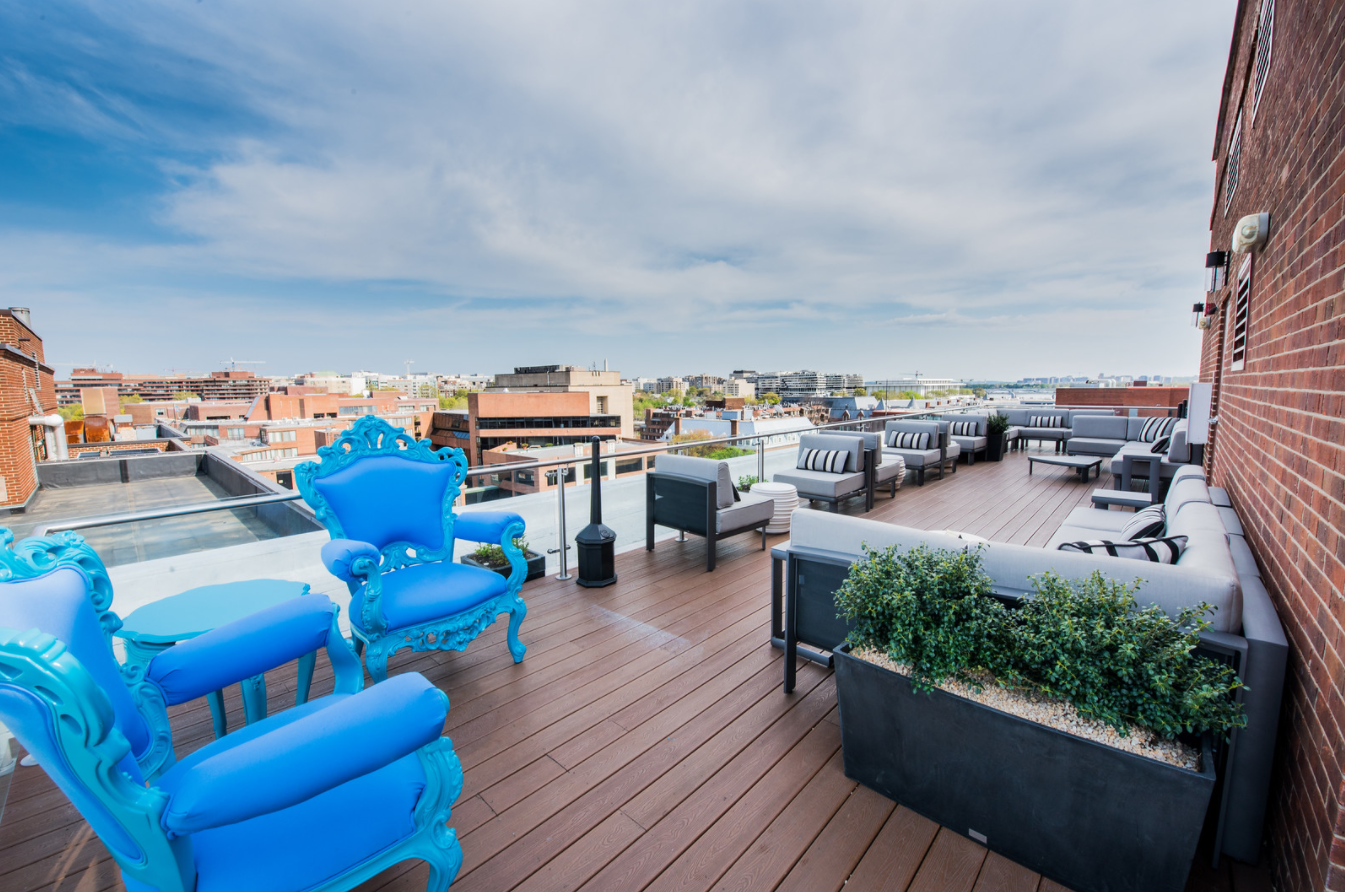 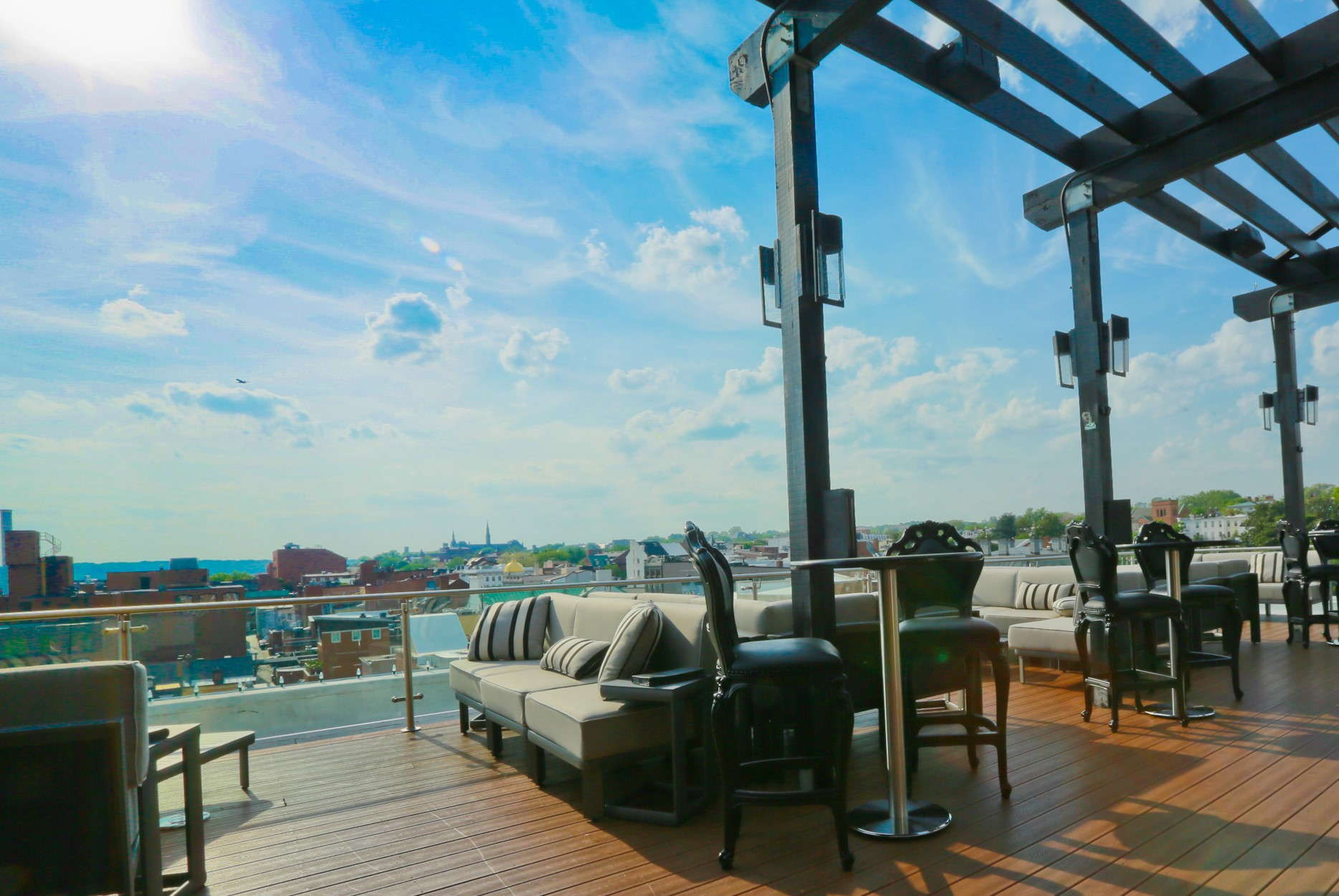 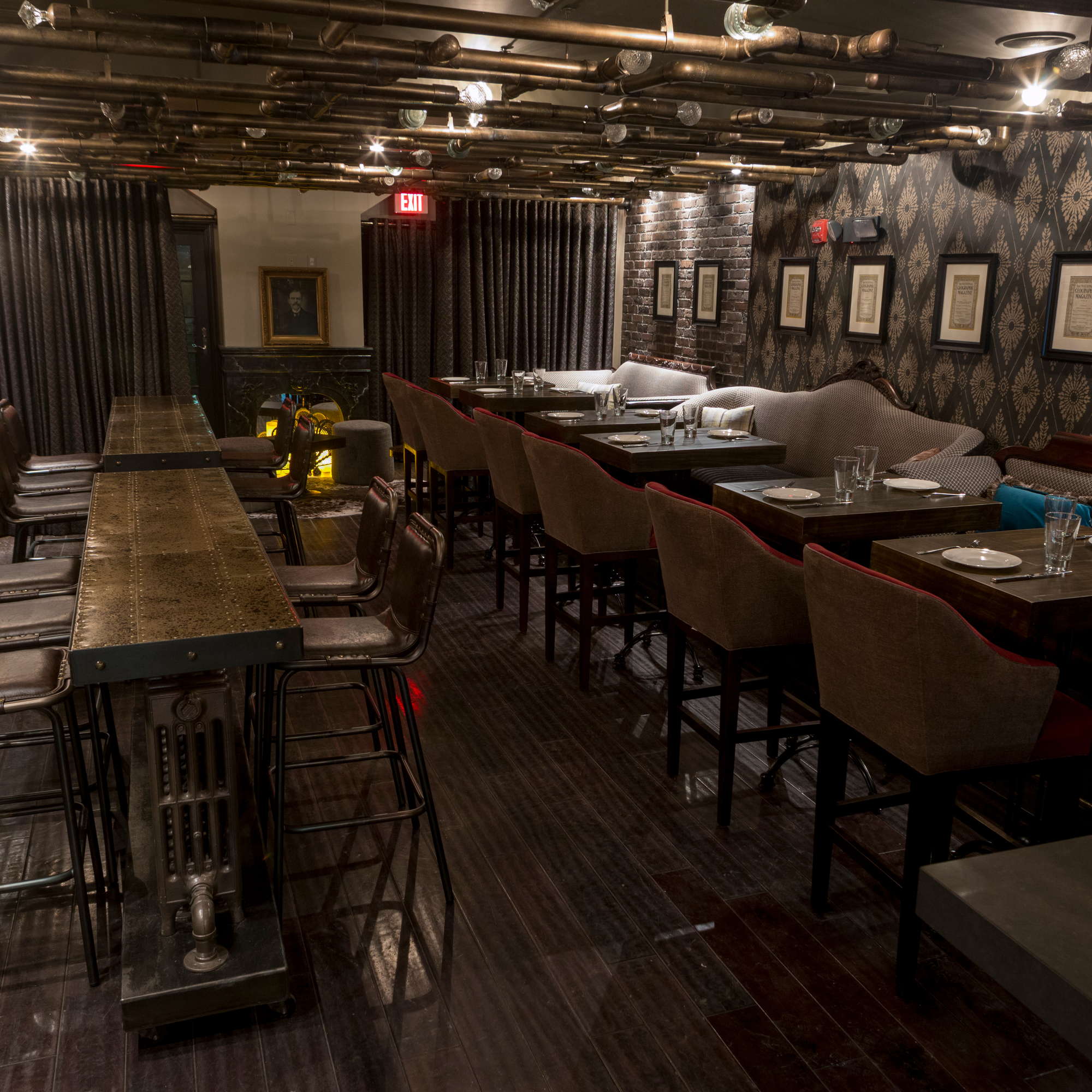 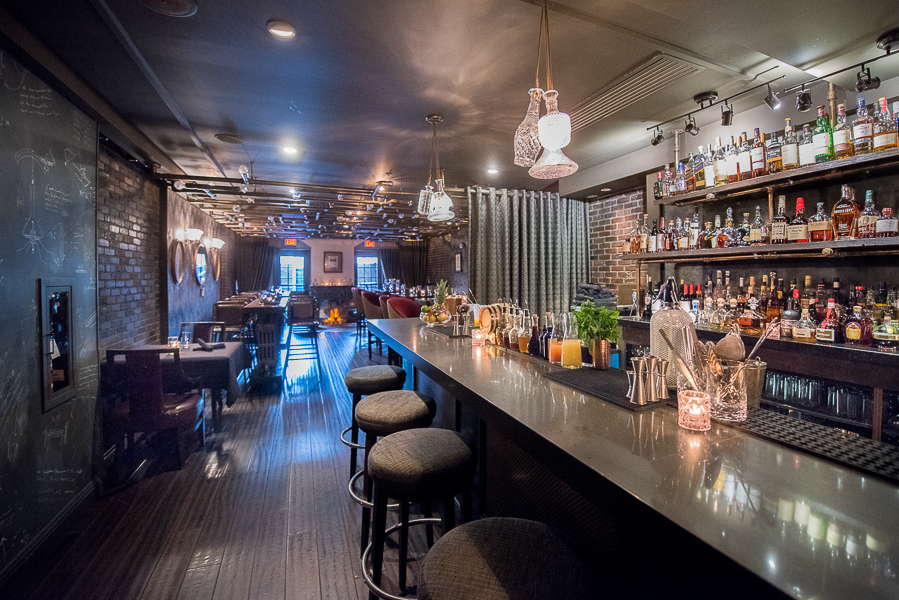 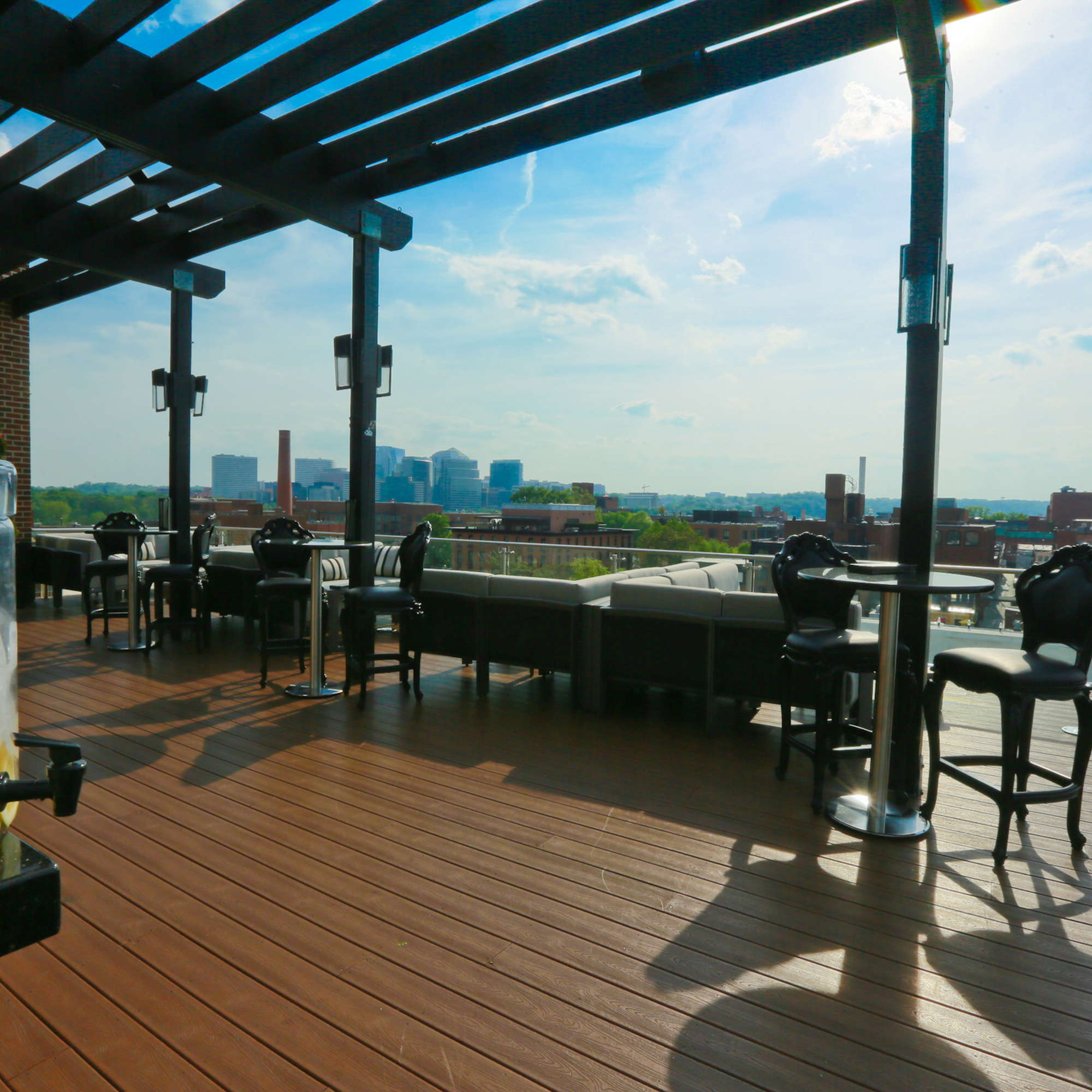 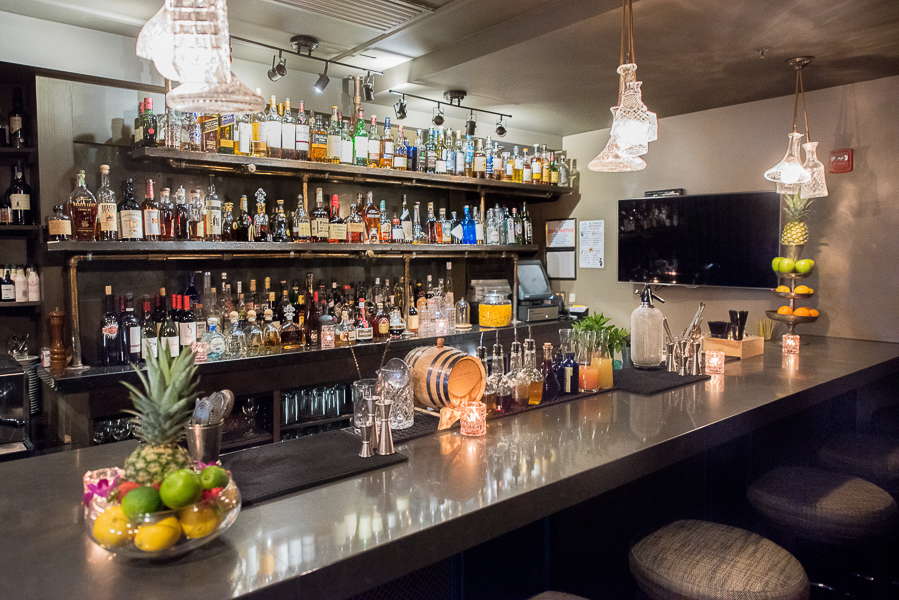