By 1828, over 600 free and enslaved Black parishioners came together to worship here each Sunday. Almost 250 years later, we’re finally learning more of their story.

For decades, a simple plaque marked the place in Williamsburg, Virginia, where one of the first-known Black churches was established in the United States. The sign held just a few sentences. Just a handful of words to mark the hallowed spot where hundreds of people gathered to sing and pray at a time when it was illegal for Black people to congregate.

It was 1776 and the nation was newly-born. A white plantation owner named Jessie Cole offered up a piece of land where the First Baptist Church could be built in defiance of the law. Word spread. By 1828, over 600 free and enslaved Black parishioners came together to worship there each Sunday.

Almost 250 years later, we’re finally learning more of their story. In September 2020, Colonial Williamsburg began excavating the site of the original First Baptist Church in order to learn more about the lives of the people who once prayed there.

Connie Harshaw is a present-day member of the First Baptist Church, now at a new location, and president of its Let Freedom Ring Foundation. She says 2020 is the perfect year for this project: “It’s important now because they’re literally uncovering our history. At this time, in this place, it could not be more important to send the message that we were here and we mattered.”

Jack Gary, Director of Archaeology for the Colonial Williamsburg Foundation, agrees on the importance of the project. He says, “The site of the first Black church founded by and for Blacks, and it’s here in Williamsburg. That’s a pretty powerful story. It’s an American story…Black history is American history, American history is Black history, it’s all one. Here is a place for us to really, really convey that to our visitors. It’s one thing to see it through exhibits and museums—that’s powerful, too—but to be able to stand in that site…there’s always something more powerful about being in the place where it happened.”

A project like this takes place in the public eye and, for Gary, that’s been particularly rewarding. He’s honored that the members of the church have put their trust in his team, especially the descendants of the original parishioners. He says, “It’s great when they come by the site and talk with us. Those conversations can be as mundane as ‘What do you dig in today?’ Those folks are intimately involved, and we want them to be and we turn to them to guide the work. We ask them what questions they want us to try and answer.”

The excavation will be done in phases. It’s been fruitful so far despite initial uncertainty about what they would find. From the outset, ground-penetrating radar revealed the foundation for a brick church dating to 1856, but they weren’t certain if they would find evidence of earlier buildings or any other artifacts.

The work was painstaking. At one point, a parking lot had been erected over the site. First, they had to bring in machinery to peel off the old concrete slab. From there, the Colonial Williamsburg team began working with hand tools, shoveling, and sifting through the dirt for relics of the past.

Everything had a story to tell—architectural debris like nails were mixed with personal items like buttons, pieces of ceramic, and remnants of children’s dolls. They found an inkwell dating back to the 19th century that has a special poignancy for Gary. “We find these objects all over town, but when you put it in the context of a church, it takes on a different meaning. They were writing down the births and the deaths and the baptisms and we think about the ink in that well doing that. So the object starts to give us a sense of the people. We’re looking for buildings, but archaeology is really about understanding people.”

Henshaw adds, “As a member of the church, knowing and loving the descendants of that church, the experience of seeing them uncover and pull out things that may have belonged to their family and friends is just overwhelming.” She goes on to say, “This is history that has to be told. And it was covered up for so long. And so now that it’s being uncovered, we’ll be able to tell the story and also share with the visitors that come to Colonial Williamsburg—it’s healing. I keep hearing that word from the descendant population.” 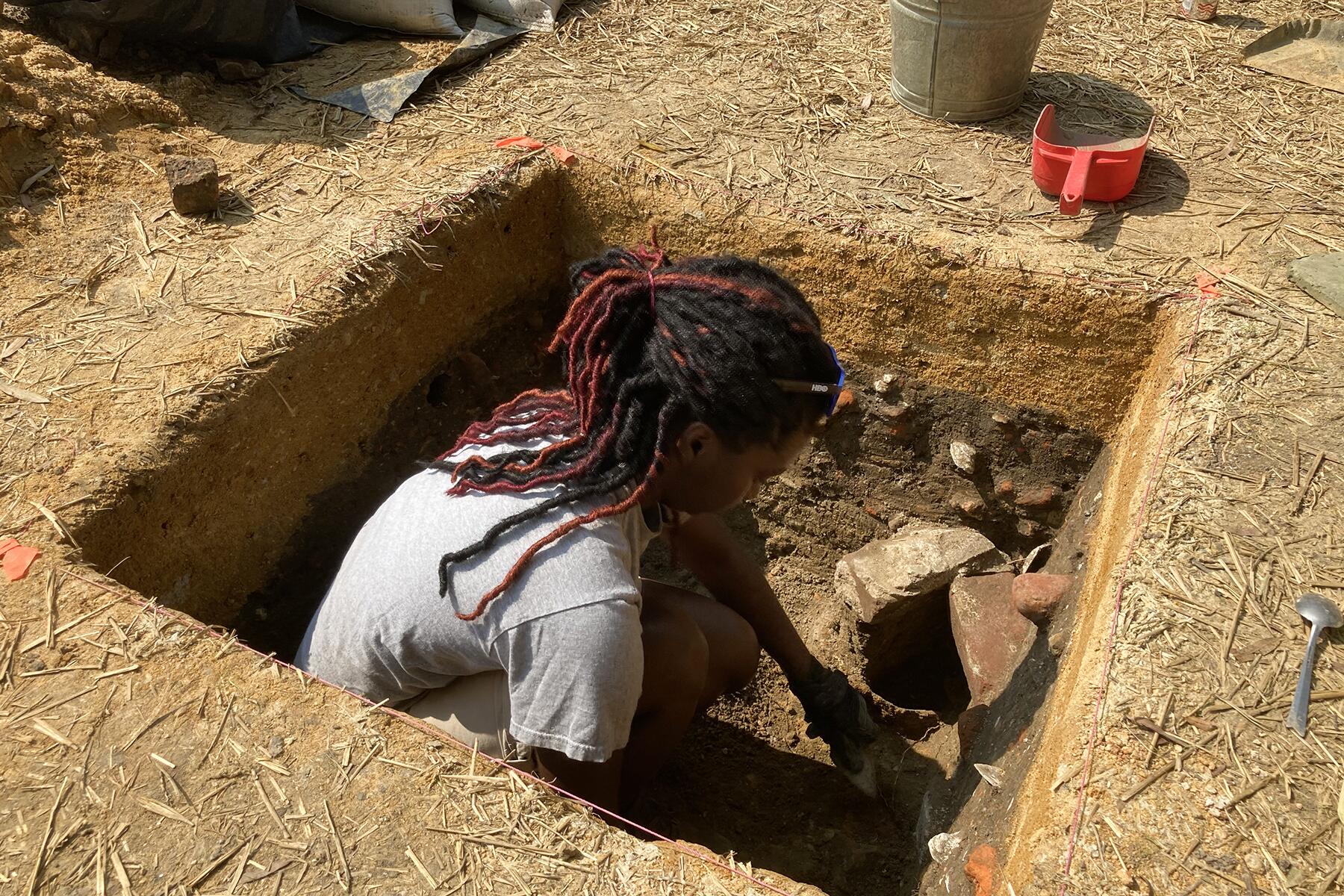 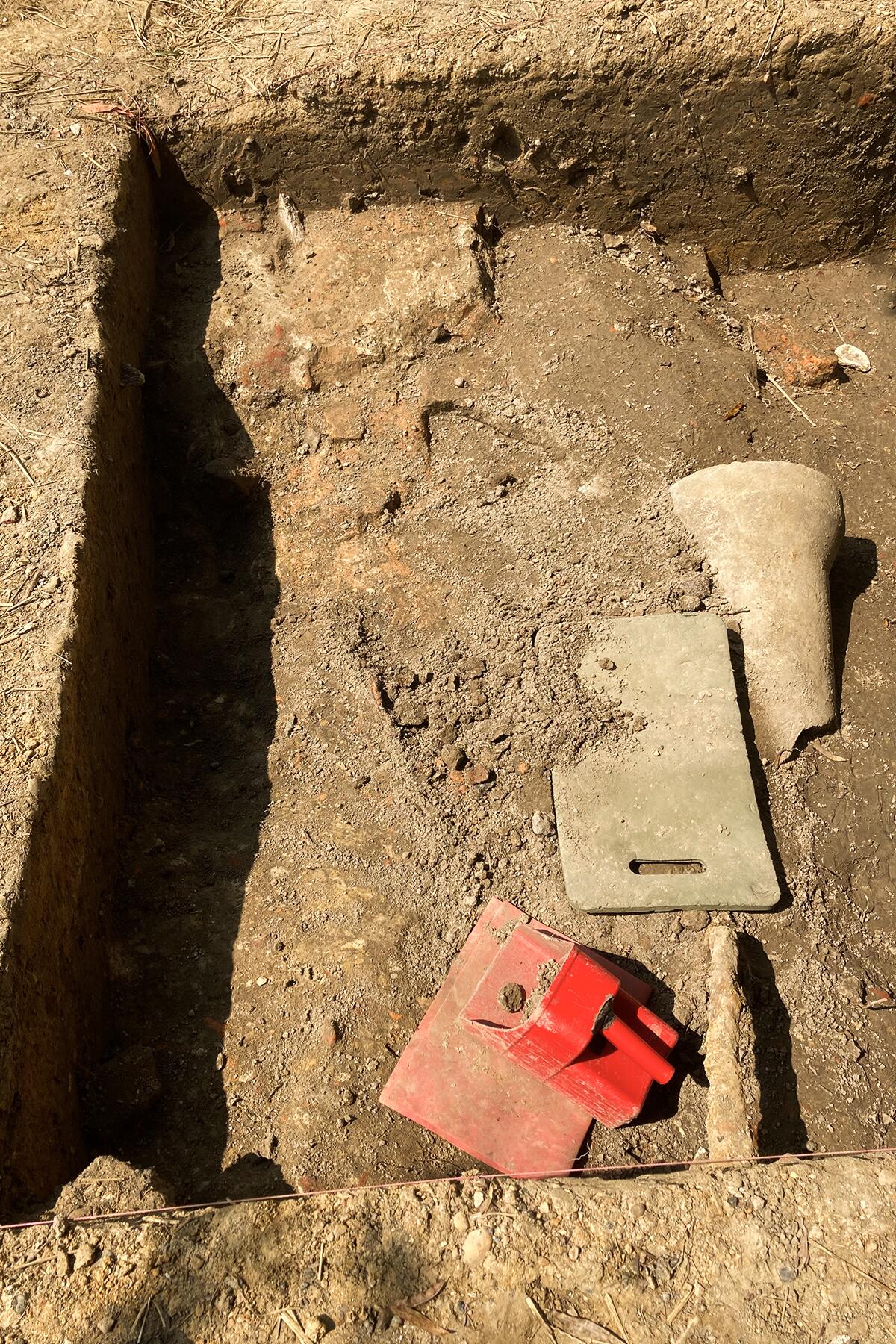 So far, in addition to the artifacts and the location of the 1856 foundation, they’ve also found intact post holes and evidence of at least one earlier structure, possibly dating back to the 1700s, but more excavation will be necessary to make a precise determination of its age.

Gary states, “We’ve wrapped up the first phase of the exploratory which was just designed to see what’s there…we’re going to start a second, much more intensive phase of work in January. And that’s going to last for a year and a half—we want it to be out there for the public to see. We want them to see the research as it happens and ask us questions. We’ve gotten really good at being able to talk while working. I want people to know that.”

Eventually, Colonial Williamsburg plans to recreate the original First Baptist Church on site. It will be a place where people from all walks of life can learn about the Black families who broke the law to worship there more than two centuries ago. A place where an ordinary object like an inkwell can remind us of how far we’ve come, even if we recognize we’re not yet where we need to be.