Its creation 20 years ago is rooted in a love story--and then history happens.

It’s like a Hallmark Channel holiday special: A decked-out Christmas store called The Christmas Sleigh selling all manner of handcrafted traditional German holiday regalia in the ever-so-sweet town of Middleburg, in the heart of Virginia’s hunt country. Its creation 20 years ago is rooted in a love story that goes back decades to Germany, where a nine-year-old boy became smitten with the visiting granddaughter of his parents’ neighbor. He carved a velvet-lined wooden box for her, promising to write letters to fill it, which he did.

Well—and here’s where the story becomes more like a Lifetime movie—that girl went on to work in public affairs at the Pentagon, in Arlington, Virginia, where she became friends with a former White House intern named Monica Lewinsky. She is the one who, in the late ‘90s, secretly taped Lewinsky as she revealed lurid details about her affair with President Bill Clinton. This disclosure proved Clinton had perjured himself in lying about the affair, leading to an impeachment trial—the charges eventually were dismissed. The woman is, of course, Linda Tripp.

INSIDER TIPCheck out the third installment of American Crime Story: Impeachment, a limited series produced by FX that portrays the Clinton-Lewinsky scandal, for a primer on the history.

After the impeachment proceedings, Tripp moved to Middleburg, about 40 miles west of Washington, D.C., to get away from it all. It’s the perfect place for that. Plenty of celebrities retreat here, the most famous of which were President John F. Kennedy and Jacqueline Kennedy, who owned a 166-acre estate just outside town.

“The local people don’t bother people here,” says Betsy Davis, the former town mayor and co-owner of the Fun Shop. She says her dad and Jackie O. were good friends, and she herself was in the Pony Club with Caroline Kennedy. She grew up knowing to respect their privacy. “Robert Duvall, who lives in [nearby] The Plains, is here all the time,” she adds. “He goes to the little coffee shop across the street and sits there with his coffee. It’s low-key. That’s why they like it. They can live like they want to live.”

Tripp moved into a cozy cottage and, in November 2000, she invited her German childhood friend, Dieter Rausch, to visit. They had seen each other over childhood summers and stayed in touch as adults. On that trip, they went to Colonial Williamsburg, where they were not impressed by two different Christmas stores with their low-quality merchandise. His native Germany, of course, is top of the market for Christmas decorations, and Tripp admitted she loved the magic of Christmas. He moved to Middleburg, and they married. And that was the origin of the Christmas Sleigh, with its doors first opening in November 2001. 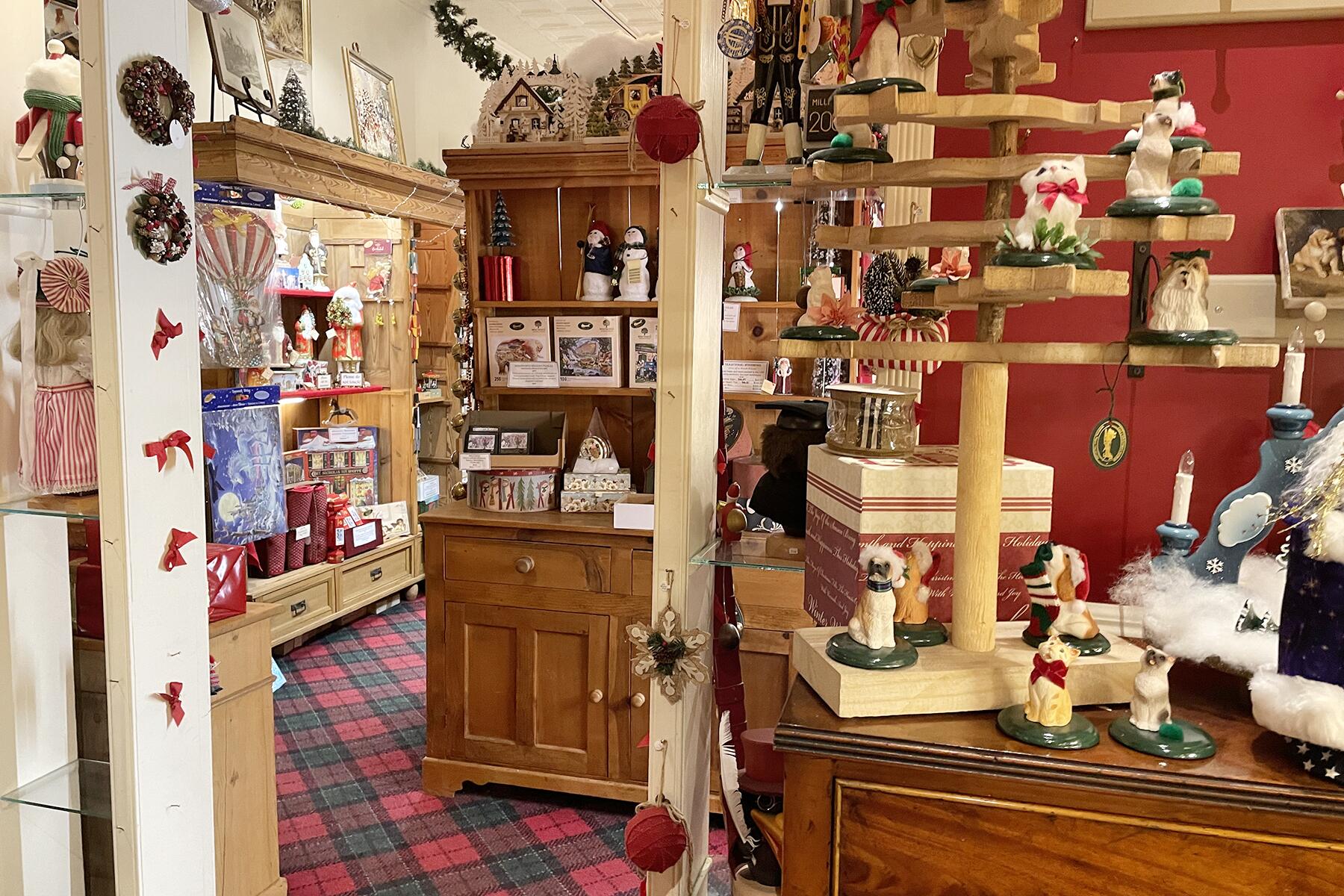 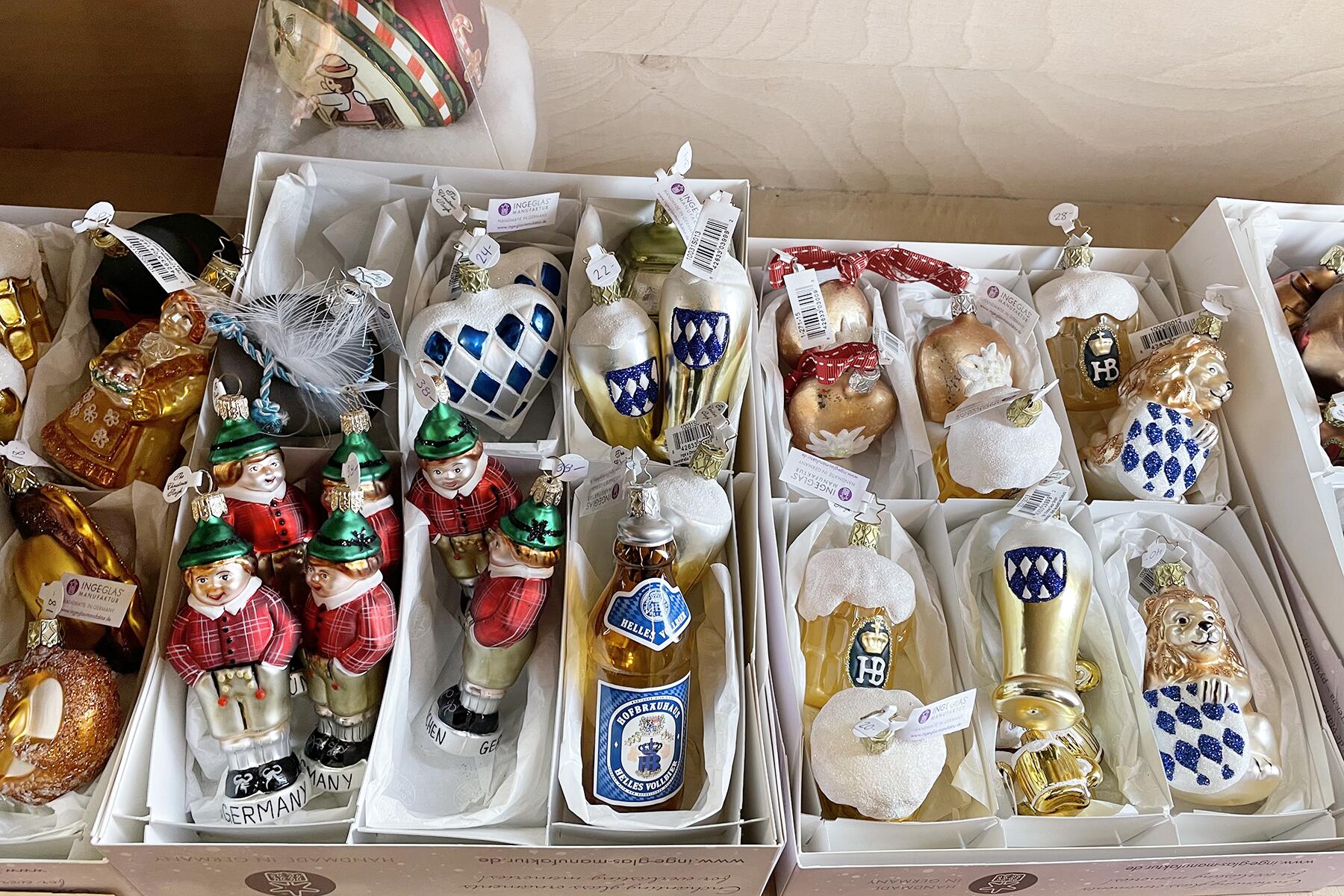 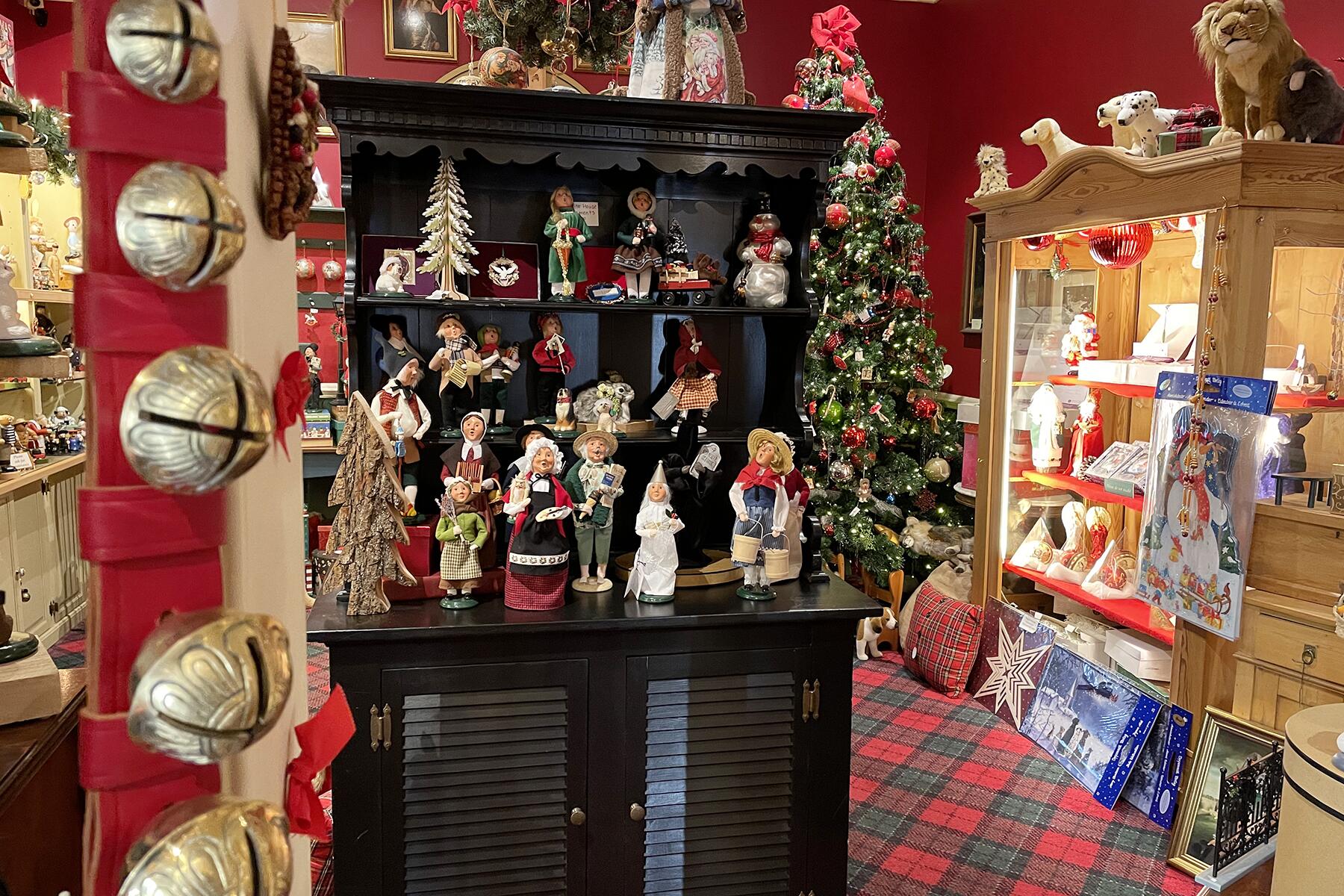 With all of this history in mind, I recently visited Middleburg with the express purpose of checking out the Christmas Sleigh. Middleburg was adorned for Christmas, with pine boughs, ribbons, and wreaths everywhere. Christmas lights covered a pine tree outside the Pink Box, the town’s info center and museum (where I also saw a plaque dedicated to Jackie Kennedy Onassis commemorating “her happy years in the village”). Painted cutouts decorated the street lamps, among them Santa, a gingerbread man, a dancing cupcake, an angel, and an odd-looking colonial guy carrying a pig’s head on a platter.

The Christmas Sleigh was easy to find. It’s right on Washington, the town’s main street, across the road from the fabled Red Fox Inn. Pine boughs and colonial-style holiday décor—pineapples, pomegranates, lemons—bedecked its exterior, declaring right off what to expect inside. I opened the door, entering a Santa’s wonderland of garlands and ornaments and decorated trees. Wood shelves and red-and-green plaid carpeting added to the cheery warmth. A man at the robust wooden cashier desk up front greeted me in a German accent.

“Welcome! Have you been before?”

It was Rausch himself, dressed in a gray felt hat and gray vest, offering a relaxed smile.

As I purveyed rooms and rooms of German Christmas paraphernalia, he scurried back and forth, addressing other shoppers and making sure they were finding everything they needed.

And everything they needed was surely here: Steinbach-German nutcrackers, 3D wooden shadow boxes, Peter Priess hand-painted eggs, creche and nativity figurines, a whole army of those creepy, handcrafted Byers Choice carolers, and the list goes on and on. Several years of the White House Christmas Ornament are displayed, including the latest, for 2021, honoring President Lyndon Johnson. And it’s not all Christmas stuff. I spied beer steins, cuckoo clocks, and, in the backroom, German- and Austrian-style clothing. 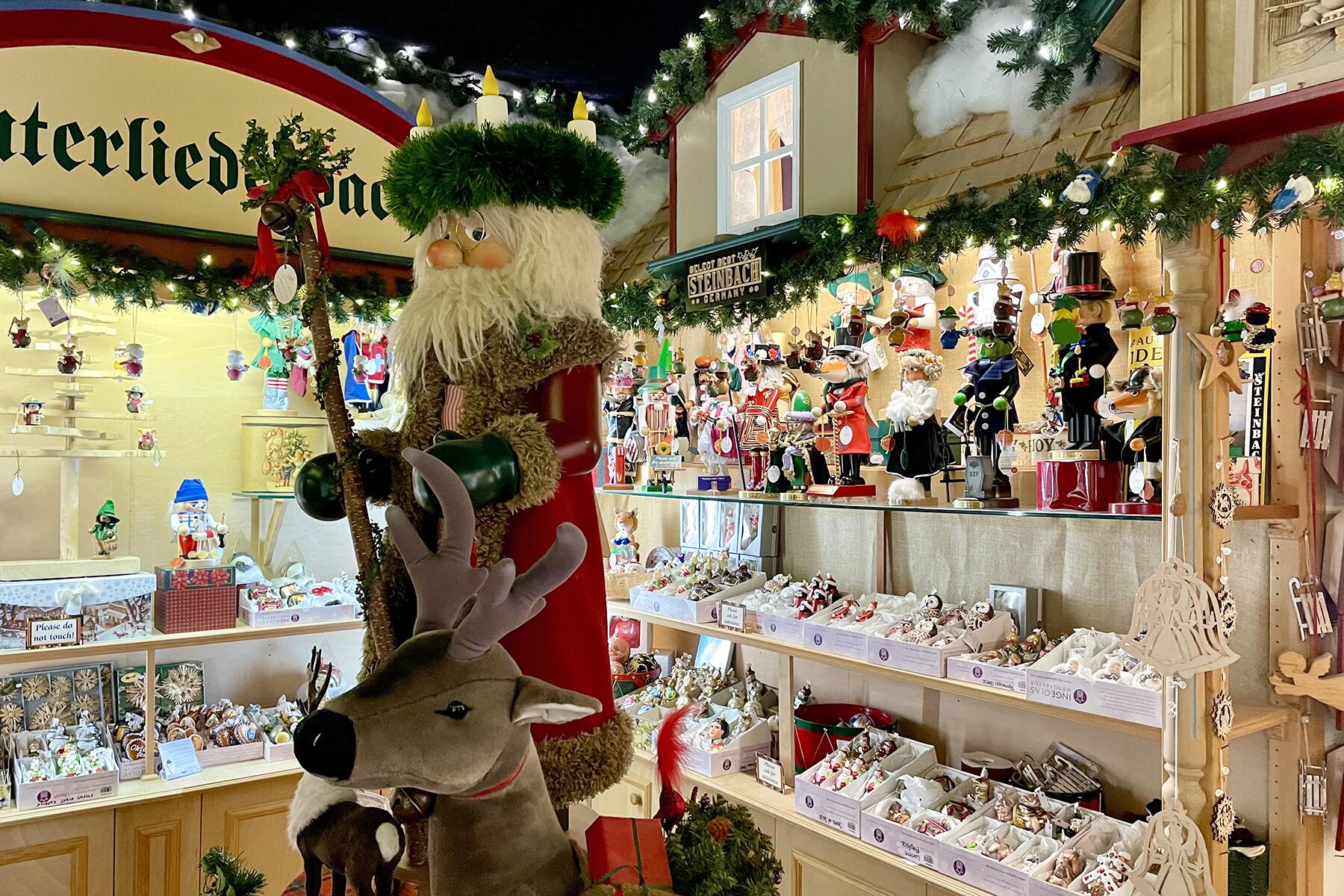 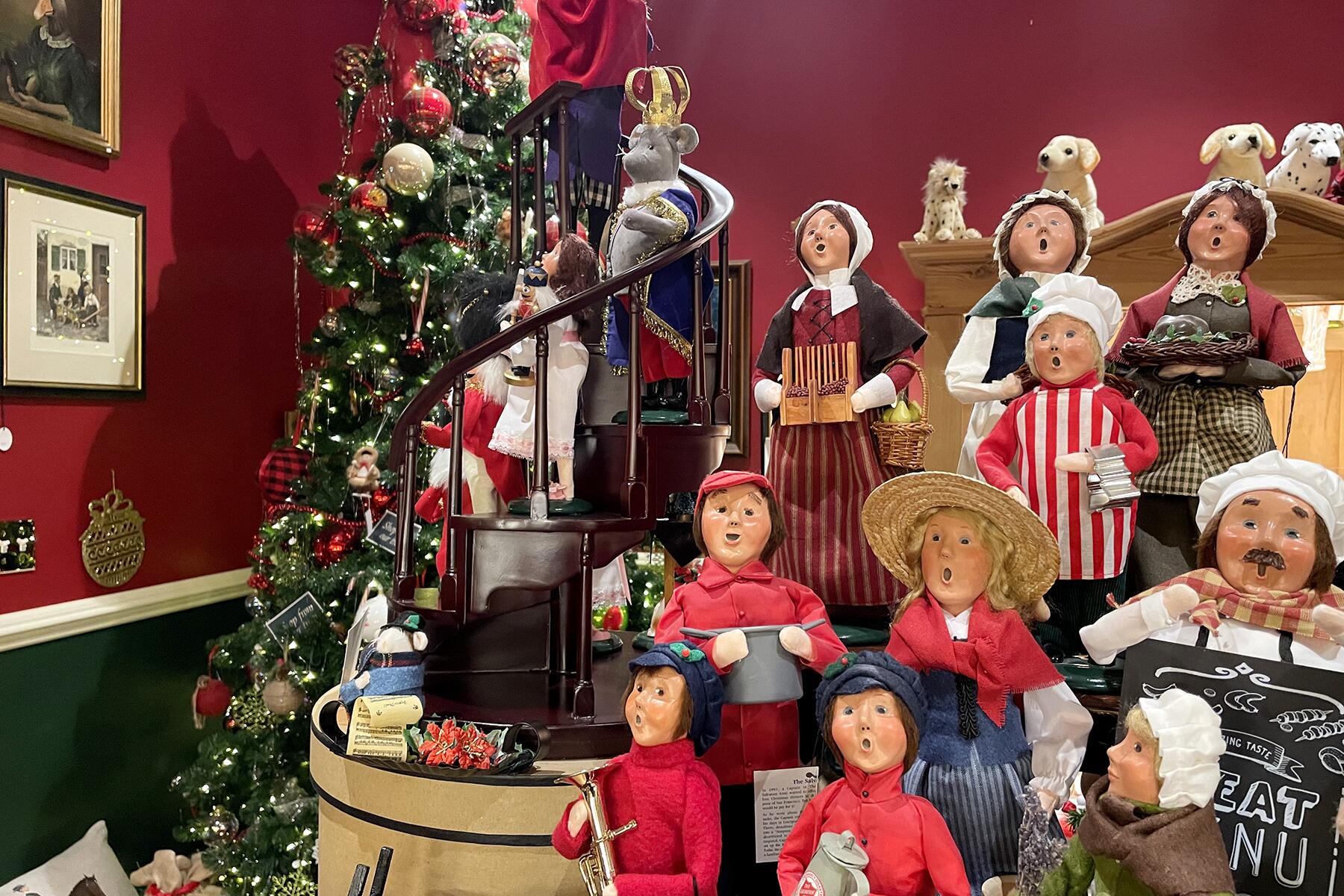 “It’s a lovely store,” Davis says. “I feel warm and fuzzy between the decorations, the shelving, and the plaid carpeting.” She goes on to say a lot of people come to Middleburg specifically for the Christmas Sleigh. “And Dieter mails a lot,” she adds. “I see him at the post office a lot.”

She says she didn’t know Tripp that well. “She used to come in my shop, but I think once she and Dieter were married, the shop took all her time. But he’s a dear man. Very quiet and always smiles. He’s a good addition to the town, as is the store.”

Sadly, Tripp passed away in April 2020 from cancer, but it appears she had found her peace in the village of Middleburg, long closing the Lifetime chapter of her life. And the store continues on. Just this year, on its 20th anniversary, it received a Resolution of Commendation, stating in part: “Now therefore be it resolved that the Mayor and Members of the Town Council of the Town of Middleburg applaud Mr. Rausch and the dedicated employees of The Christmas Sleigh for their faithful support of the community, as well as their longstanding service to our visitors and citizens.”

It’s the perfect ending to the Hallmark Christmas special this story truly is, the mingling of a sweet love story and a passion for Christmas.