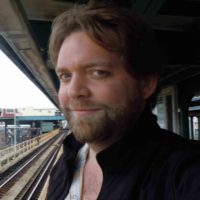 From outside Green Mountain State, Burlington seems like a quaint, charming outpost in the northern reaches of New England. But to Vermonters, the city of 60,000 is far larger than it appears. As the cultural, social, and economic center of the state, it is also the primary source of its staunch leftist philosophy—the same that elected Bernie Sanders mayor three times in the 1980s and gave birth to Phish and Ben & Jerry’s. Burlington continues to nurture this spirit and has prospered accordingly, building a strong community committed to an open society and organic life. The result is one of the highest standards of living in the country and a range of dining, entertainment, and activities far beyond its size. And all of this comes amid the stunning landscape of the Champlain Valley, framed by the Adirondacks and Lake Champlain to the west, and the Green Mountains to the east. The best evidence, however, is in the overwhelmingly positive reactions of those who spend a long weekend in Burlington. 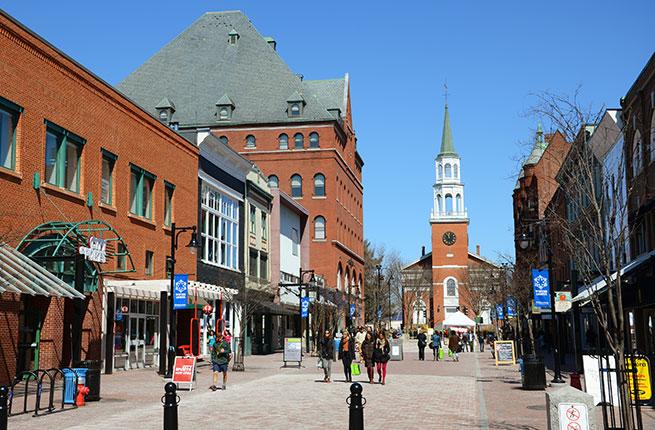 The majority of Burlington’s cultural life—tourist attractions included—is found downtown, where the slope up from the lake flattens out for easy navigation. At the center is the pedestrianized Church Street Marketplace, where shops, restaurants, cafés, and bars lure customers.

It’s also here that the relaxed pace of life in Burlington becomes quickly apparent. You’ll see the shaggier and rumpled fashion of the denizens who linger about the benches, decorative boulders, statuary, and outdoor restaurant patios chatting with friends, playing with their dogs, or reading books. More than a few have instruments in hand, as busking (with a permit) is encouraged. To do as the Burlingtonians do, take your time to explore, starting with the redbrick, white-steepled Unitarian church at the north end that gave the street its name. Built in 1816, it’s the city’s oldest place of worship and in true Burlington spirit, open to all, “whatever your race, creed, gender, or sexual orientation.”

Church Street is also a good place to start exploring Vermont’s vibrant arts and crafts scene. At Danforth Pewter, the family has been crafting plates, cups, and more since 1733, while Frog Hollow displays the work of active Vermont potters, sculptors, painters, photographers, glassblowers, and jewelers.  If you’re visiting the city between mid-May and mid-October, you’ll find dozens more artists plying their trades at the outdoor Artist Market in City Hall Park, part of the larger farmers’ market.  Classic art fans can head up the hill from downtown to the Fleming Museum at the University of Vermont, where you can find works of John Singer Sargent, Max Beckmann, and Andy Warhol.

However, cuisine is the largest source of inspiration downtown and draws from Vermont’s steadfast support of all things organic, local, and farm-to-table. Any time before late afternoon, get in line at Penny Cluse Café, the city favorite for brunch and lunch, which explains the long wait on weekends. No trip to Vermont is complete without at least one cone at Ben & Jerry’s, which opened its first scoop shop in Burlington in 1978. Just be sure to save dinner (and probably make a reservation) for Hen of the Wood, whose savvy, gussied-up interpretations of regional cuisine and fastidious attention to fresh, organic, and local sourcing make it arguably the best restaurant in the state.

If you’re thirsty for the state’s justly world-famous craft beer , stop into the Farmhouse Tap & Grill (which also has excellent food) to sample a brew from Hill Farmstead. If you prefer a townier vibe, cheaper prices, the cut of lemon pledge in the nostrils, and an equally good tap list, hit up Finnigan’s Pub. In good weather, however, take at least one drink on an outdoor patio on Church Street, mostly concentrated on the southernmost block.

Entertainment-wise, the biggest names play at the Flynn Theater, where half of the pleasure of the experience lies in the restored beauty of the 1930s Art Deco interior. Otherwise, bars like Higher Ground, Red Square, Radio Bean, and Nectar’s have bands nightly. The latter is also a prime spot for late-night cravings, as the famous fries and gravy are served even after midnight.

Weather permitting (as is always the case in Vermont), pack a swimsuit for a day along Lake Champlain, which runs virtually the entire length of the state, forming the “west coast” of New England. The Burlington side is also home to beautiful bike paths, laid over 7.6 miles of railroad that once shipped lumber and industrial goods north and south.

The route also connects six major parks, including Burlington’s other centerpiece, Waterfront Park, where the slope hits the lake at College Street. Until the ‘90s, this was a polluted wasteland of derelict factories, railyards, and machinery, so those who remember never cease to be amazed at the transformation, which now features soft green lawns, a boardwalk promenade, restaurants, marina, and a skate park. Burlington’s four-legged inhabitants are particular fans and can often be seen chasing down Frisbees and tennis balls in slobbering excitement.

Kids get special attention at the Echo Leahy Center, dedicated to educating people about the ecology, culture, and history of the Lake Champlain Basin. Exhibits include an aquarium and other reptile and amphibian demonstrations that are also perfectly entertaining to adults. In fact, several times a year, adults-only Echo Afterdark events are held with local wines, beer, spirits, and cider.

Just next door, you’ll also find the docking point for Lake Champlain Shoreline Cruises on the Spirit of Ethan Allen III, which goes on daily scenic tours (mid-May to mid-October) as well as more elaborate Champagne brunches, themed dinners, and sunset spins in the evenings. Indeed, Waterfront Park regularly brings an influx of visitors around sundown for a panoramic play of violets, reds, yellows, and oranges across the sky and water as the sun slips behind the Adirondacks.

If you want to go for a swim, rent a bike at North Star Sports or Local Motion, and follow the path to its southern terminus at Oakledge and Red Rocks parks for a somewhat wilder landscape (and cliff jumping), or head north to Burlington’s two largest sandy beaches at North Beach and Leddy Park, which come with facilities. However, there are several unattended little sandy inlets beyond. From here, the path crosses a bridge over the Winooski River and goes north into Colchester and onto the bike path’s most picturesque portion on the causeway, where the lake is on both sides.  At the “cut,” a bike ferry (June–Oct.) will bring serious bikers (who aren’t exhausted by this point) across the 200-foot gap to the islands beyond.

There’s little in the way of facilities along the route, so pack a lunch or stifle hunger pangs upon your return to Burlington with perhaps the state’s best pizza at American Flatbread, elegant Chinese at A Single Pebble, or one of the best steaks of your life at the Guild Tavern. 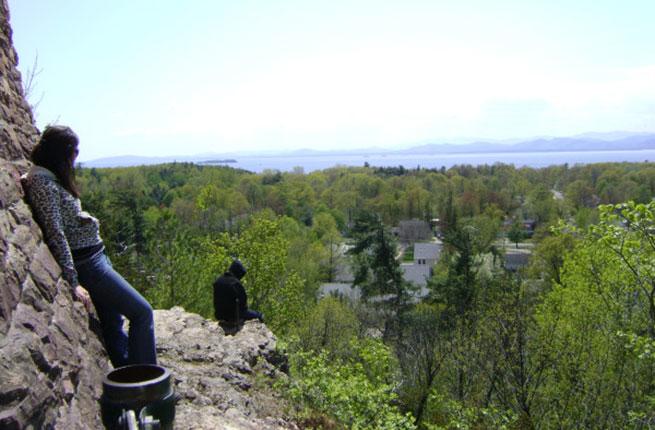 Outside of downtown, a car is essential to explore any attractions. Start the day in the “new” north end at Ethan Allen Park, named after the Vermont patriot who famously captured Fort Ticonderoga during the Revolutionary War. Upon retirement, he settled on his farm in the now protected wetlands on the other side. In tribute, a castle-like tower was erected in 1905 on the rocky peak of the heavily wooded park. From the top are 360-degree views of the Champlain Valley.

Follow both paved and dirt trails at the base (with at least one coat of mosquito repellant) north to the entrance of the wetlands, where it turns south again, to reach the Ethan Allen Homestead (or access off nearby Route 127 by car). Built in 1787, the structure gives visitors a look into life in Vermont during the 18th century, as do the historical and archaeological exhibitions in the adjacent building. The trails that extend in several directions are particularly prized by birders.

Return downtown and head for Pine Street. The South End is one of the fastest developing parts of the city nowadays, with an emphasis on art. Once Burlington’s industrial core, the area of former factories and machine shops has been taken over by artists and designers, who’ve created a vibrant district of studios, galleries, art supply shops, and framers, many of which are open to the public on First Friday Art every month. Insider Tip: If you are looking to buy, stop into Dostie Bros. and ask for Alex, who curates many of the shows and knows everyone.

Ever more edibles are also produced along the strip, from Burlington’s best scones at Great Harvest, bagels at Myer’s, and chocolate at Lake Champlain Chocolates. Vermont’s craft brewing boom has also seen two breweries—Zero Gravity and Queen City open tap rooms. Citizen Cider is another popular watering hole. Excellent bistro-style bites are just nearby at Arts Riot, where food trucks pull up Friday evenings for yet another reason to celebrate the end of the week.

Most hotels in the area are downtown, particularly along Battery Street, which overlooks the lake. At the intersection with Cherry Street is perhaps Burlington’s most popular, and design-savvy accommodation, The Hotel Vermont. Opened in 2013, it offers a compelling boutique vision of Vermont in the 21st century with virtually all local materials, including black granite walls, marble counters, and red oak and lake shells in the flooring. The hotel’s restaurant, Juniper, also makes some of the best cocktails in town. For a memorable inn-style stay, look no further than Made Inn Vermont in the hills above downtown. Accommodation here astonishes with its zest, quirk, and breakfast, not to mention record players and collections in every room. The vintage Victorian building is also topped with an elegant (and accessible) widow’s walk. A happy medium can be found at Burlington’s newest hotel, the Hilton Garden Inn on lower Main Street. Opened in January 2015, the complex combines the handsome old brick Armory with new, modern-style wings. On the ground floor, around the side, is the Vermont Comedy Club.

In a city much affected by weather, summer in Burlington is undoubtedly when locals come out to play and most festivals and events take place. The exit of about 15,000 college students also makes it the quietest time of year. However, Burlington (and Vermont in general) arguably reaches the peak of its beauty during the fall, particularly the first two weeks of October, when the leaves turn vivid oranges, reds, and yellows. If carving ski trails is a goal, February and March are ideal, as the deep freeze of winter begins to pass and snow and ice soften. Several resorts are within a couple hours’ drive.  In general, avoid November and December, when the cold arrives with little snow, and April and May, when the snowmelt brings a flood of mud and slush.

The deep green undulating landscape of Vermont makes almost any approach by car or train memorable, albeit a long one—six hours from New York City, four from Boston, but only 90 minutes from Montreal. If crossing from New York, it’s worth any extra time to take the ferry from Port Kent, which disembarks right on the Burlington waterfront. Regular daily flights arrive from most major eastern and northern cities.