When it comes to the bizarre, this Texas city has its fair share of wonderfully weird places.

San Antonio, one of the largest cities in Texas, is known for its history, rich culture, and vibrant character. But when it comes to the quirky and the curious, it holds its own. The next time you’re visiting the Alamo City, make sure to stop at these eccentric places. 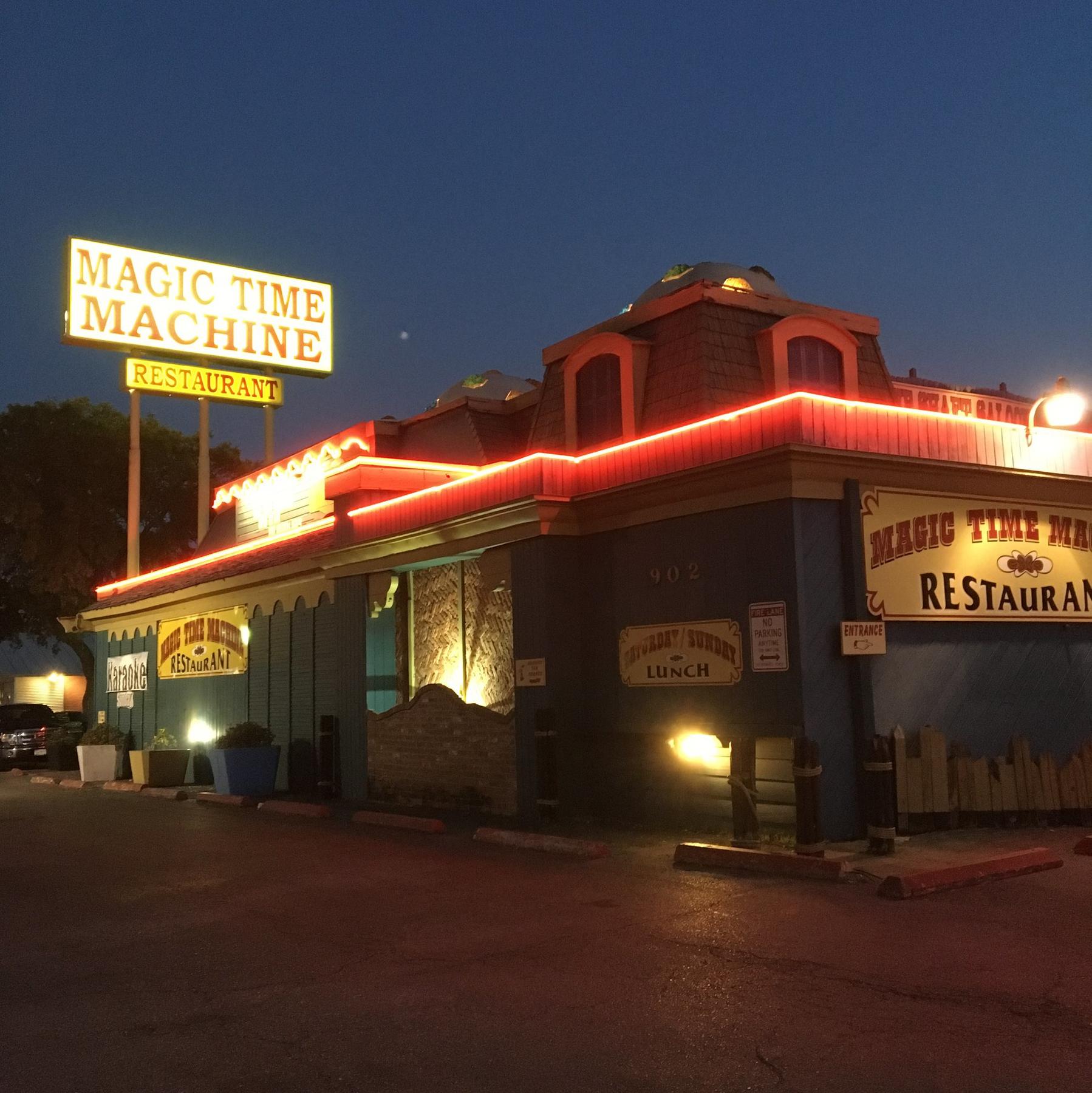 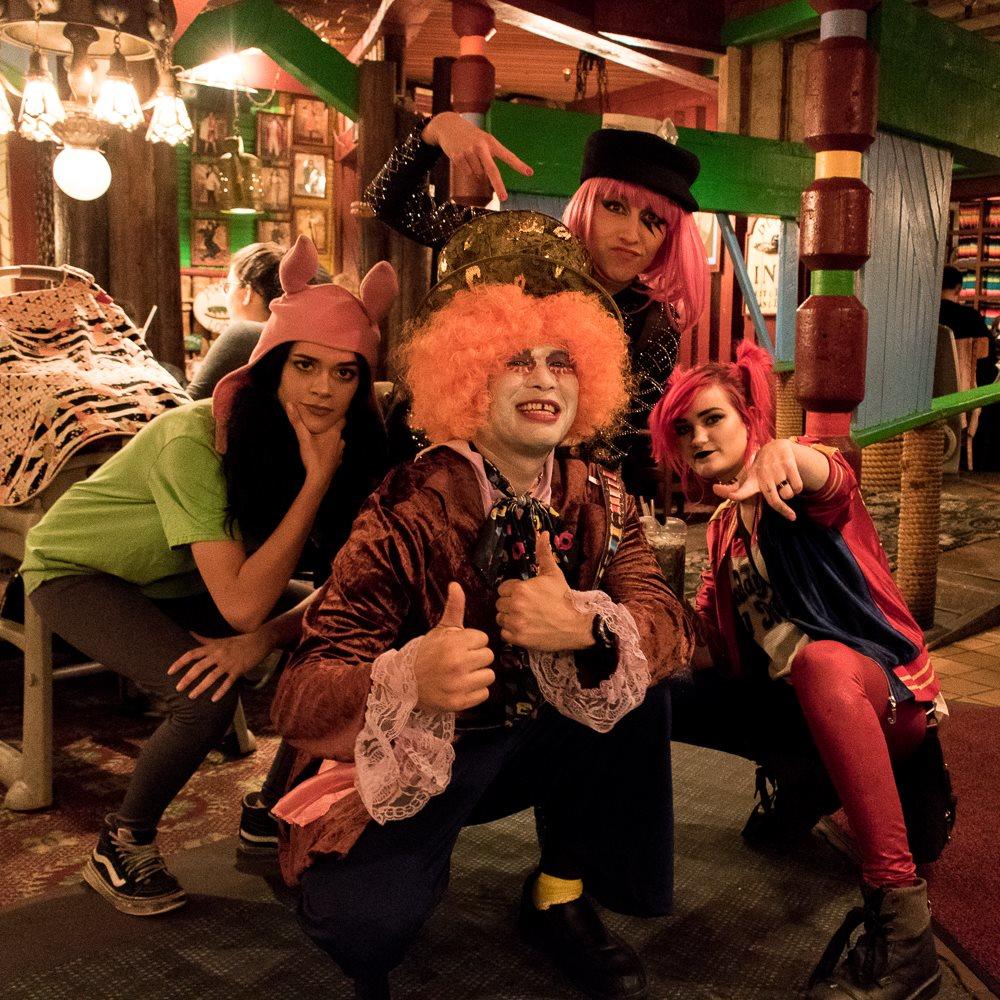 If you love nostalgia and kitsch, the Magic Time Machine is a must. It’s not the standard America fare people come here for—it’s the smorgasbord of antiquated décor and servers dressed as pirates, superheroes, and Alice in Wonderland characters. Built in 1973, the restaurant doesn’t look like its been updated since, which kind of adds to the allure. While most theme restaurants have come and gone, Magic Time Machine was one of the first, and it’s still hanging in there.

INSIDER TIPWe know this place is more for the kiddos, but there is something charming about a salad bar made from a red MG-TD roadster. 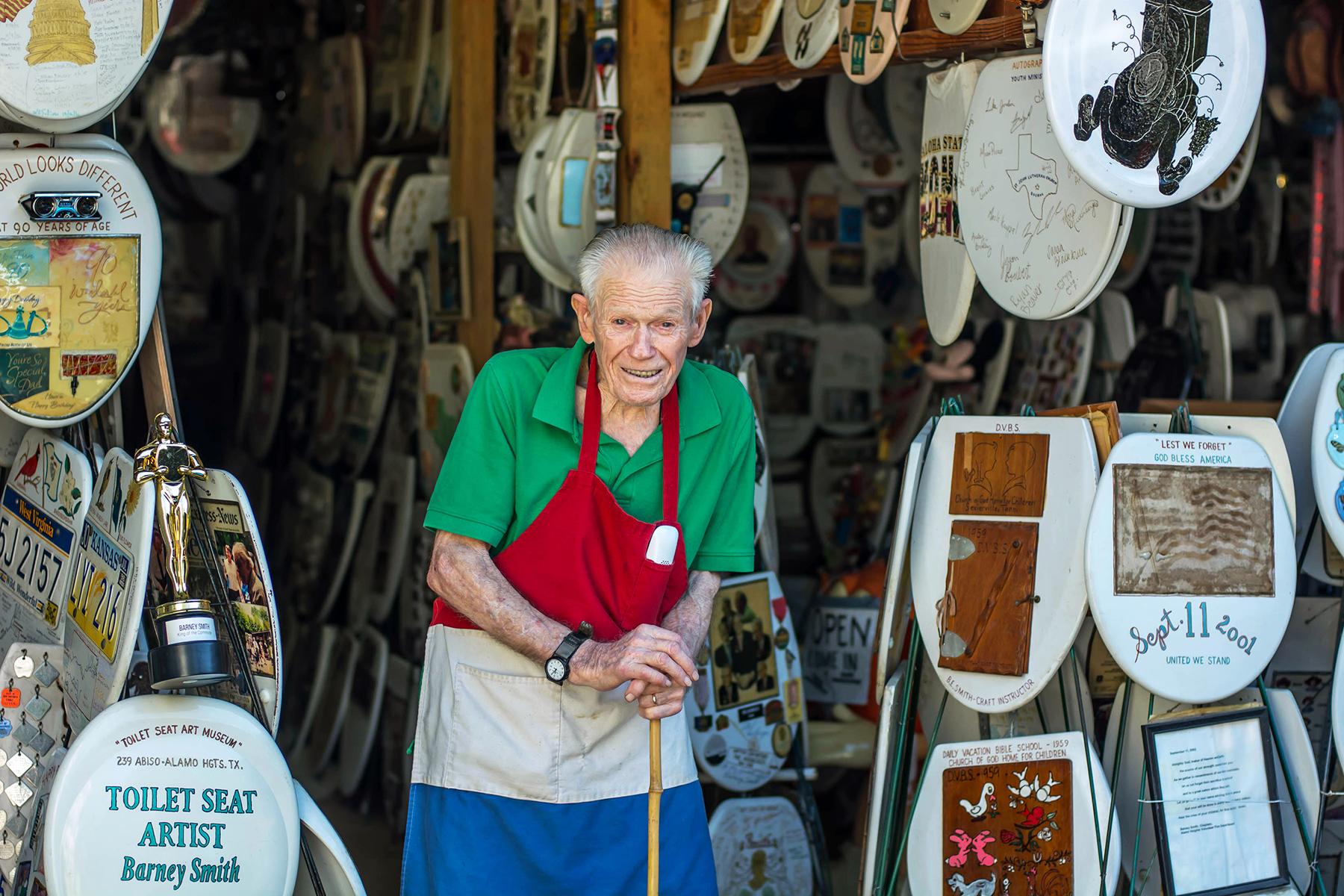 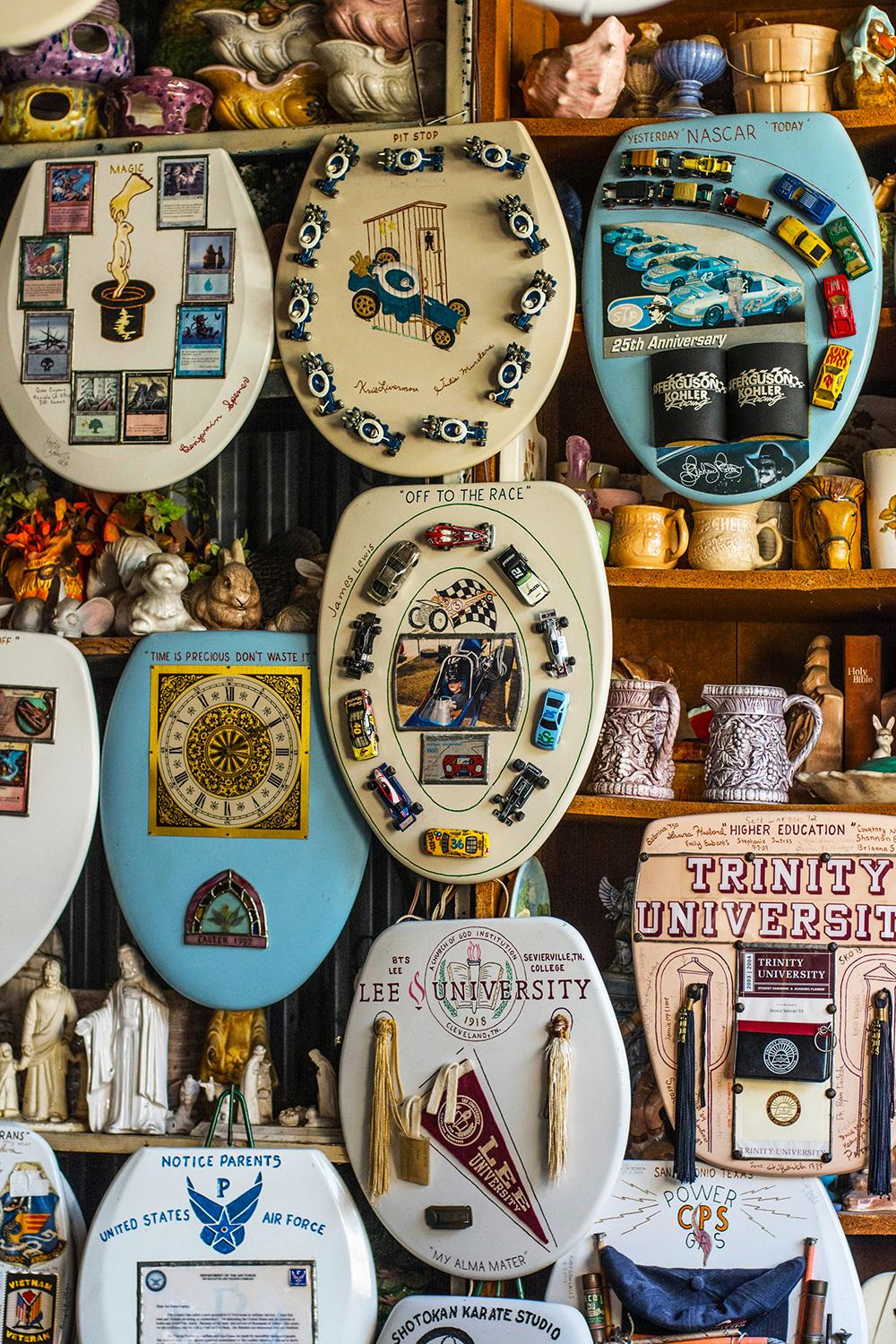 PHOTO: Photograph by Angel Coggins. Courtesy of Cattywampus Press
Previous Next
2 OF 8

San Antonio has its fair share of outsider art, and arguably the best place to see it is in a nonagenarian’s garage. Former plumber Barney Smith began painting toilet seats over 50 years ago, and his collection now stands at 1,300. He’s still showing off his beloved seats, which feature found objects like antlers, shoe horns, eyeglasses, and instruments, but he’s looking to sell his museum. Make sure you get there before it’s sold.

INSIDER TIPMr. Smith asks that you call ahead. He’s offering tours by appointment only. 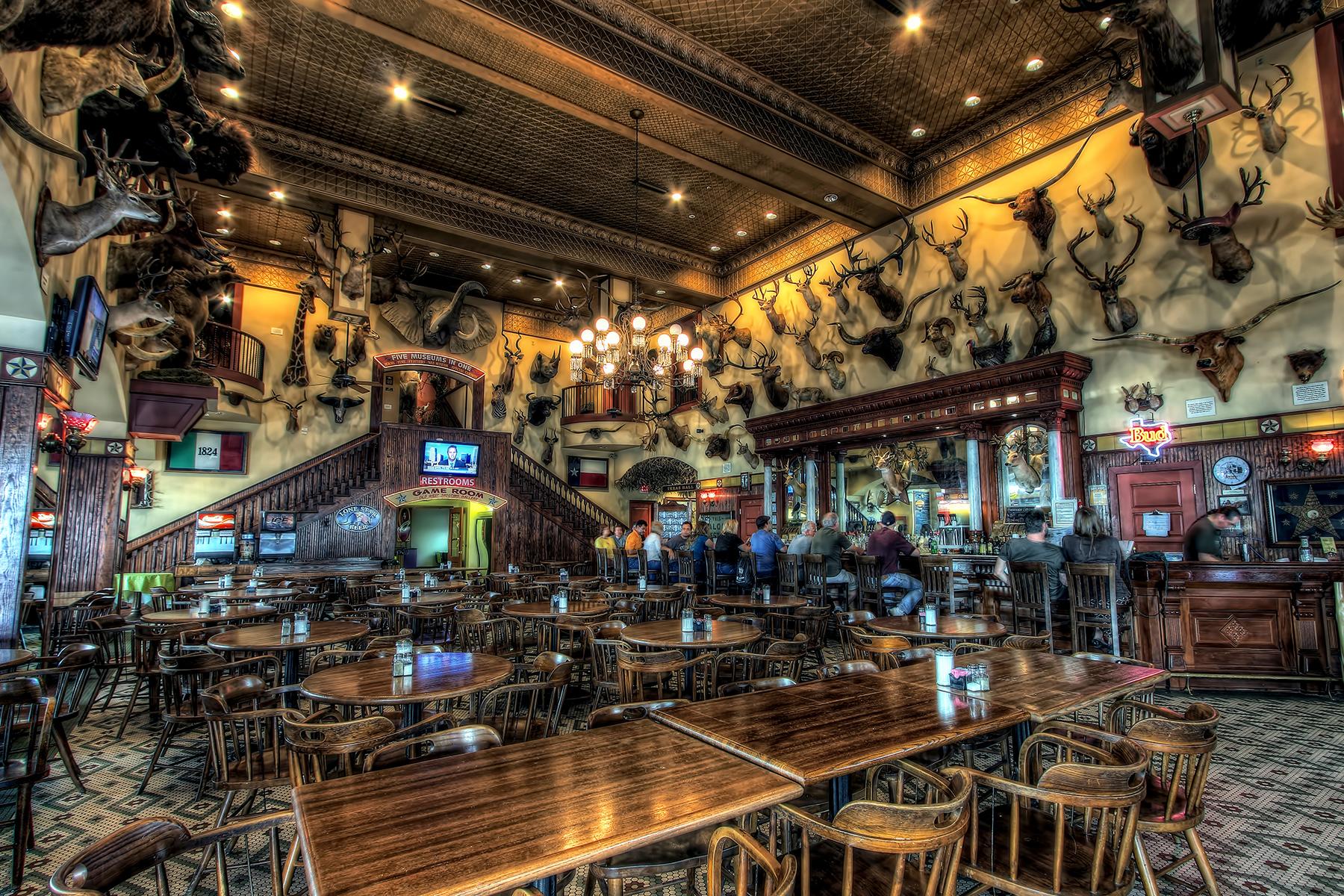 Opened in the 1880s, this saloon-turned-Museum is famous for being “where Teddy Roosevelt recruited Rough Riders and Pancho Villa was rumored to have planned the Mexican Revolution.” If that isn’t weird enough, consider the dozens upon dozens of animal busts that watch you while you eat. Bears, lions, bison, and deer lining the tall walls quietly judge you as you munch on a burger or a chicken sandwich.

INSIDER TIPIt’s free to visit the Buckhorn Saloon, café, and gift shop, but if you want to visit the museums you’ll have to fork out $19.99 per adult and $14.99 per child over 3. 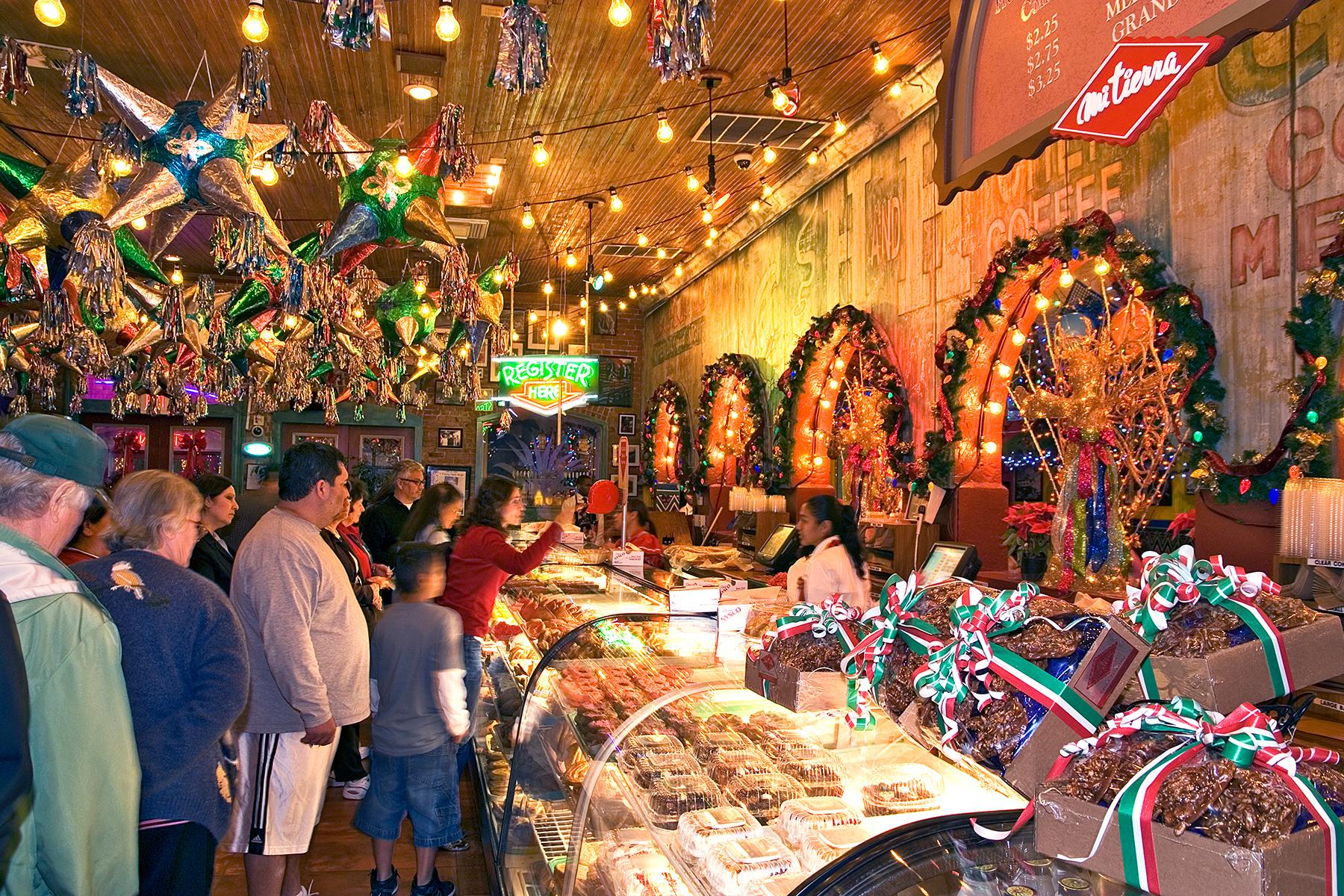 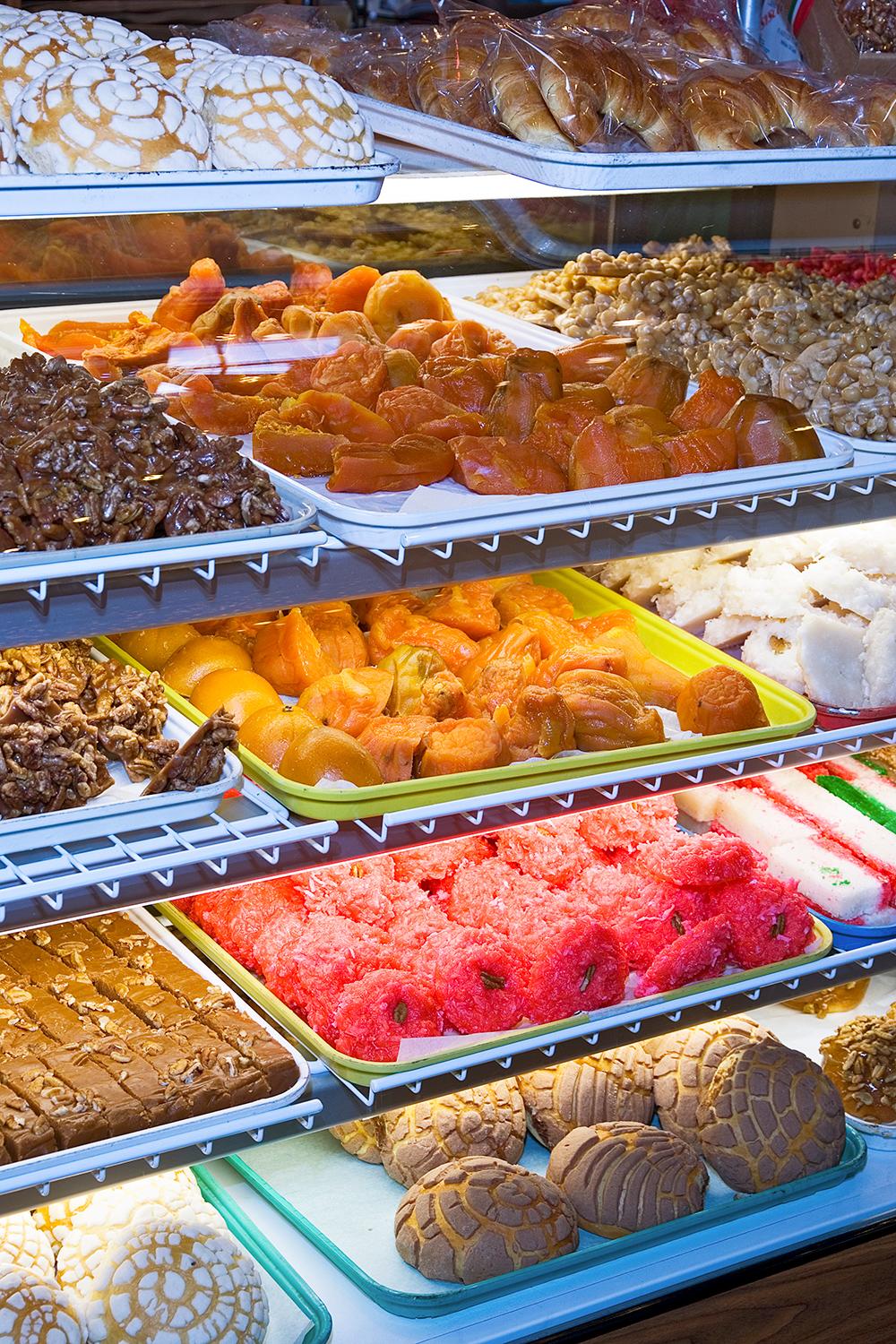 From the exterior, this 75-year-old restaurant in the El Mercado district of San Antonio looks like a normal Mexican restaurant and bakery. It’s what is inside that will truly blow you away. The gargantuan eatery can seat over 500 people and every square inch is covered in lights and tinsel. And what pieces of real estate that aren’t covered in shiny objects are covered in beautiful murals that celebrate the “achievements and success of Hispanic leaders in our community.” The atmosphere will make your heart happy, and the food is pretty good too.

INSIDER TIPMake sure to tip the very talented mariachi players that regularly serenade guests while they eat.

Big Lou’s looks like your average pizza joint, with wood panel walls and TVs playing the game, but what this spot is known for are their ridiculously large pizzas. We’re talking 42” of yummy cheesy goodness.  Slices are longer than most people’s forearms, and it takes at least ten people to polish off the pie. For those who want something a little smaller, they have 37” pies too.

INSIDER TIPIf gigantic pizzas aren’t your thing, Big Lou’s has normal-sized pies and a plethora of offerings like wings, calzones, sandwiches, and pasta. 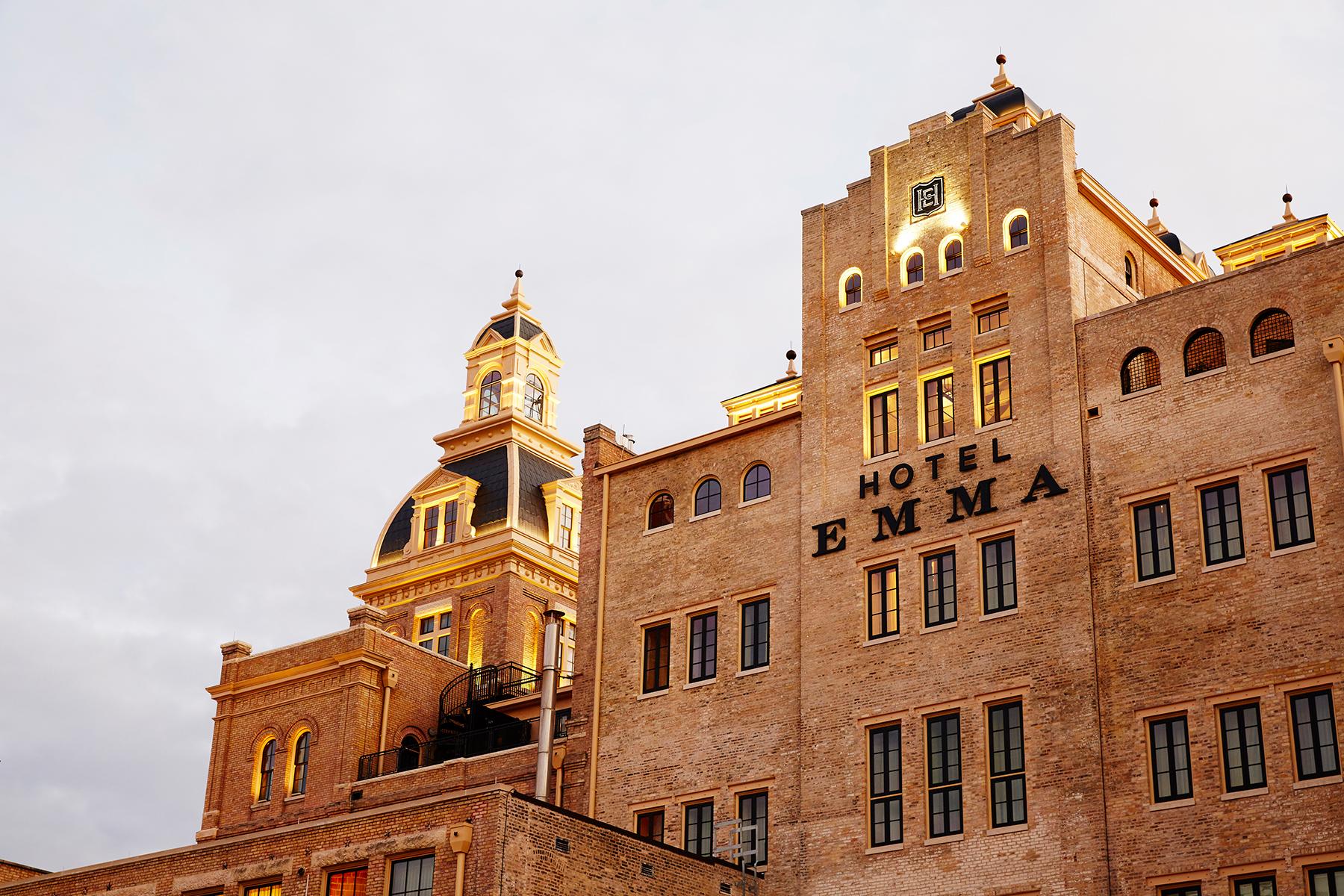 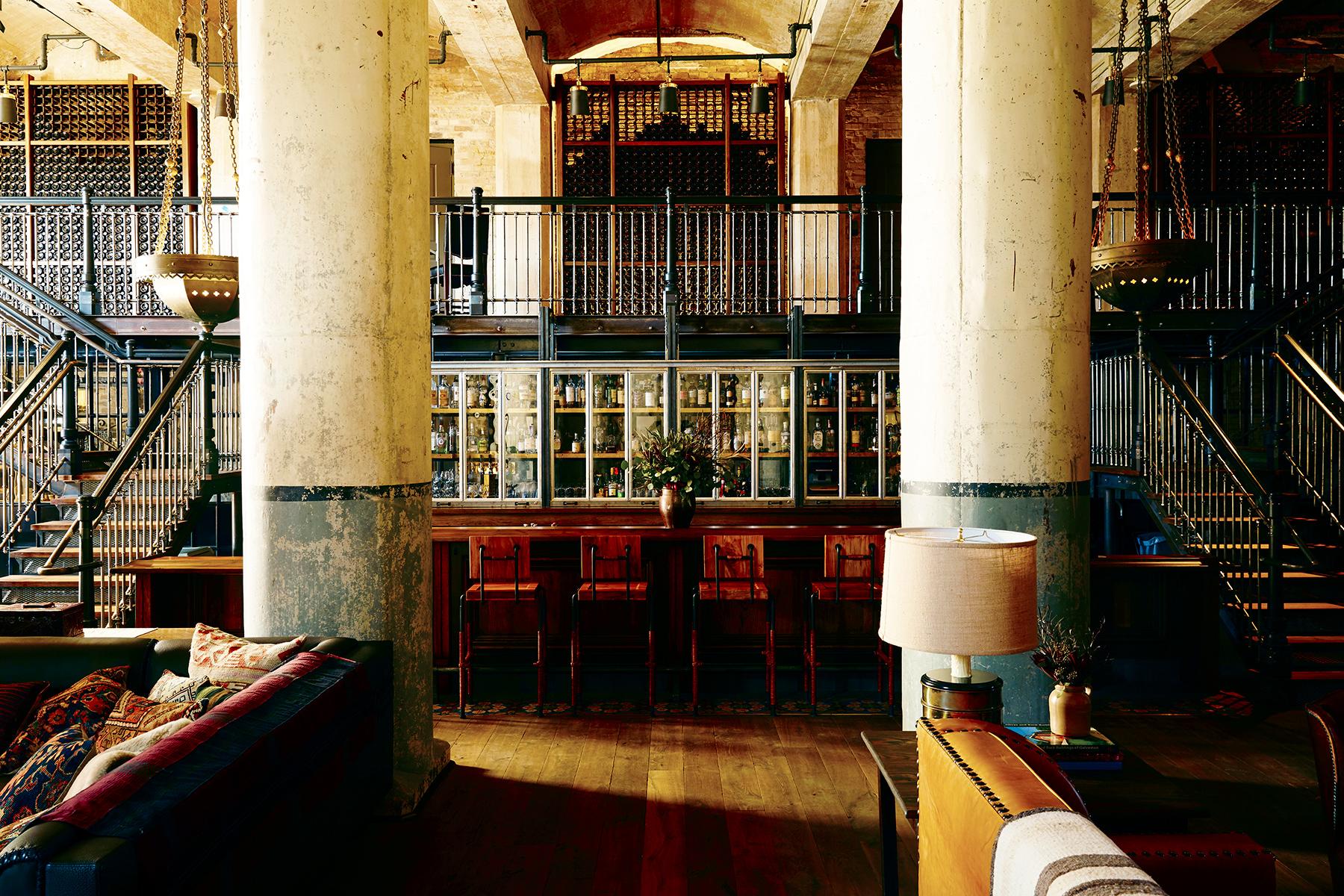 PHOTO: Nicole Franzen
Previous Next
6 OF 8

Located in the revamped Pearl Brewery, this gorgeous luxury hotel preserved most of the 100+ year-old brewery. Visitors can sit in vintage brewing vats at the Sternewirth Bar or marvel at the industrial fixtures located throughout the hotel. The brewery also has a storied past: The owner, Otto Koehler was having an affair with two women, Emma and Emma, and one of them shot him to death. After his death, Otto’s wife, Emma (yes a third Emma), took over and kept the brewery alive during prohibition.

INSIDER TIPThe hotel rests next to the San Antonio River and features a beautiful path you can stroll along. It’s also near a bevy of shops and restaurants on the Pearl Brewery grounds.

Besides being San Antonio’s spot for masquerades and witch balls, Victoria’s Black Swan Inn, located in a 19th-century mansion, is also home to paranormal investigations. On certain days of the year, the public is invited to join ghost hunters as they explore the grounds for spirits. Make sure to bring cash. The opportunity to see a ghost will cost you.

INSIDER TIPThe inn is affiliated with the Yorktown Memorial Hospital, an abandoned hospital located an hour east of San Antonio and considered one of the most haunted places in Texas. Like the inn, the hospital is open to paranormal investigations. 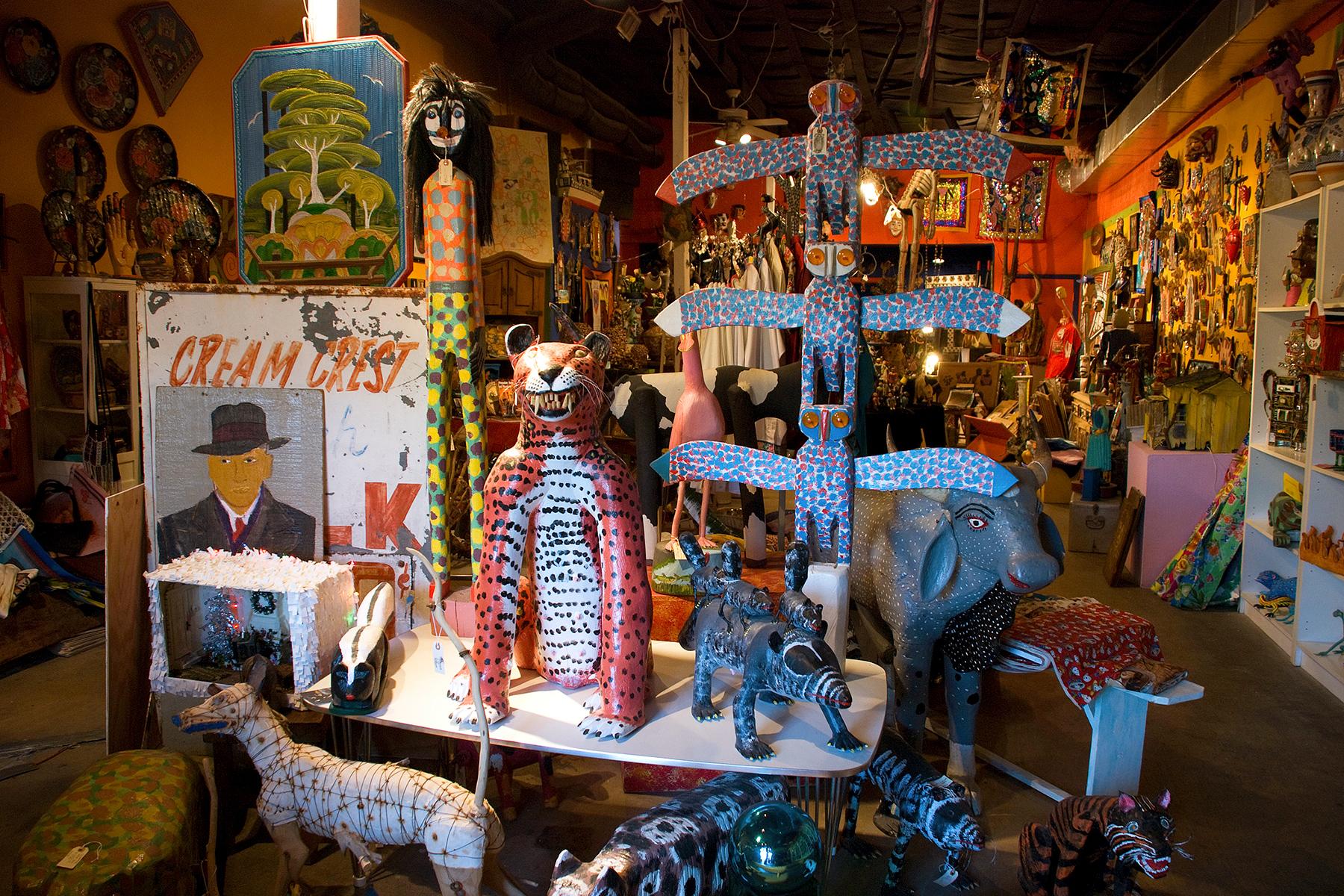 Located in the charming King William neighborhood, this art gallery has been a staple in San Antonio since 1989. Here you will see some of the most interesting outsider and folk art from the Americas, Europe, and Africa. Upon entering the colorful gallery, you’ll be greeted with everything from Haitian voodoo banners to Day of the Dead figures, found objects depicting the Statue of Liberty and Mexican paper makers. It’s a warm and welcoming place, and you’ll leave wanting to decorate your house with colorful artwork.