Everything’s bigger in Texas—even the vampire scene. Television and film have catapulted vampires into the mainstream, cementing vampirism into pop culture. From the cult classic Interview with the Vampire to FXX series What We Do in the Shadows, there’s no shortage of fictional portrayals of vampire life and the people who crave to be like them. Life can be stranger than fiction, and real-life vampires exist. While they tend to have an affinity for the occult, they’ve sunk their fangs into philanthropy and social good during the COVID-19 pandemic.

Texas is one of many states that boasts of vibrant vampire communities, known as courts. Self-identifying vampires can apply for membership in their city. To an outsider, these vampire courts may sound eerie. For the vampires, the courts are a place they can find belonging.

“We celebrate the dark, the macabre, and the spooky, and we recognize that it’s part of culture throughout history,” says Mikael Kage, king of the Houston Vampire Court (HVC). “No matter how weird or how spooky you think your passions and ideas are, you have a place where you’re not judged for it.”

What Does It Mean to Be a Real-Life Vampire

We know you have questions. Will garlic hurt them? Can they go in the sunlight? Are they rocking the Dracula’s chunky brows?

For what it’s worth, Kage is quick to separate himself from Dracula since “vampires weren’t exactly going through their super sexy phase” at the time. And speaking of sexy, we can’t forget the Cullens. To real-life vampires, the hot vamps of the Twilight saga are just “mopey superheroes that sparkle in the sunlight,” he says. 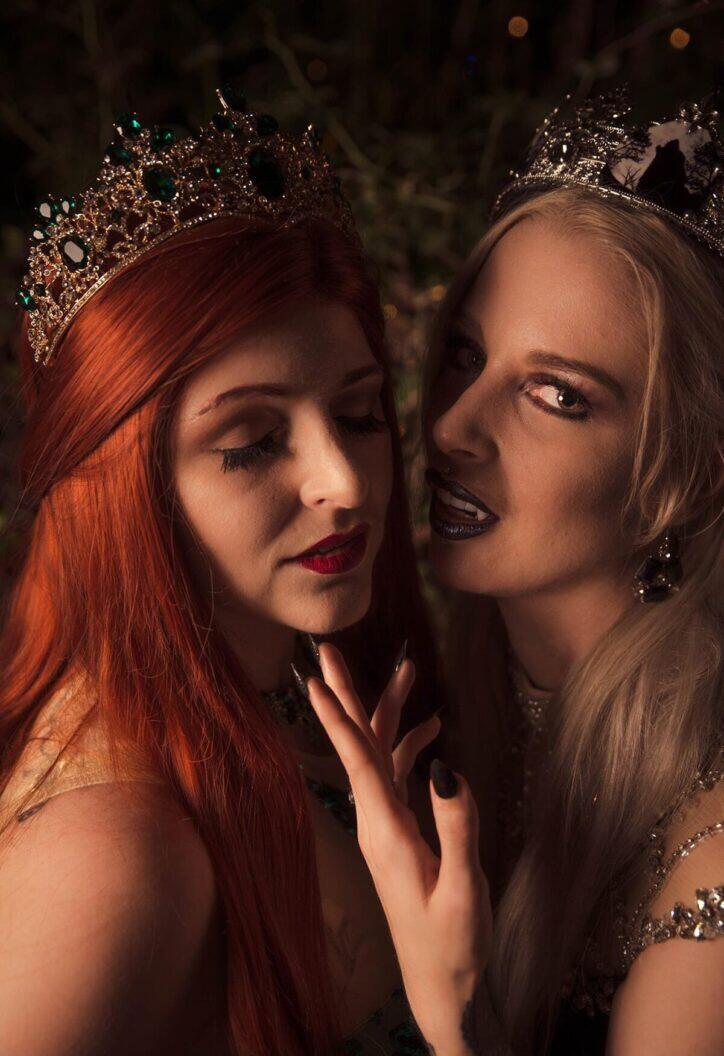 Kage, who’s been leading the HVC since 2017, has been rooted in the vampire community for decades. The 45-year-old first discovered the subculture while visiting night clubs that attracted a goth aesthetic and meeting people who shared similar interests.

INSIDER TIPEach year, the vampire courts throw charity balls that gather hundreds of guests. In Houston’s annual Nightshade Ball and Dallas’s Bleeding Hearts Ball include live music, drinks, and entertainment like burlesque performers and tarot card readings. While dressing up is optional, gothic influences and Victorian-inspired clothing is a popular look of the night.

While he was quick to debunk vampiric myths like immortality and glittering skin, he did clue us in on a singular moment in every vampire’s life. An “awakening” is the moment “where it all makes sense,” and is endearingly referred to as “coming out of the coffin,” Kage explains. The realization of being a vampire usually arrives around puberty but can come later in life.

You can get lost in the ethers of Reddit when searching for answers on what it means to be a real-life vampire. Some feast on blood, energy, and or both. “Sanguinarian” is a common phrase used to classify vamps who crave and get nourishment from human and/or animal blood. Psychic vampires believe they can sustain themselves off people’s energy, making the people around them lethargic. (If you feel drained after chatting with Pam from HR, you might want to check on that.)

According to Kage, the HVC has helped “disabuse people who may have some really weird notions” regarding blood-sucking and immortality. “We’ll help them enjoy how they feel without going down any dangerous paths,” he explains.

While Houston’s vibe emanates with what Kage calls a “punk-rock feel,” the Vampire Court of Dallas/Fort Worth (VCD) possesses an artistic overtone. While the two groups are independent of one another, philanthropy is the kinship of their missions.

“Charity work seemed the best way to utilize the amount of unique talent inside and outside of our membership as well provide these needed opportunities for giving—all to benefit the city and community that we love by creating art, culture, and music—while at the same time supporting some amazing groups doing wonderful work here locally,” says Danielle Kowal, a media representative and member of the VCD.

The VCD, which is a certified 501(c)(3) nonprofit, consists of 70 members who vote on which philanthropic projects and local charities to get behind. The VCD has raised more than $20,000 over the past four years for local causes. Blood drives, children with medical needs, heart research, exotic animal shelters, and domestic abuse prevention are just a few of the many causes the VCD has contributed to in its community.

In Houston, Kage remarks on the collective passion in the group’s philanthropic endeavors. “People could see that change, and it kept them motivated to keep trying to do good things and to look for more local projects we can take on,” he shares.

One of HVC’s most successful efforts is its annual drive to pay-off student lunch debts. The court discovered that families who make too much to qualify for free school meals, but not enough to afford daily lunches are in a precarious situation. If a student cannot pay for their lunch and accrue a certain debt, they can be denied lunch or get a less substantial meal.

“It was horrifying [to learn] how many kids were being denied food at school,” explains Kage. After HVC compiled a list of school phone numbers in the various Houston-area school districts, its members called and donated lunch debts across the city. They quickly paid off more than 300 debts before they eventually stopped counting.

Vampires may lay in the shadows of the Lone Star State, but the extreme threat of COVID-19 stands out in daylight.

Despite the more than 400,000 coronavirus cases in Texas, the courts are finding ways to stay connected online to members. “We support each other through all things [like] COVID, BLM protests, and anything else that we will face until a new normal has been established,” says Kowal.

The VCD has retreated to online movie nights and even educational resume building workshops. In the switch to digital, the court has even added a few new vampires to its realm. “We have been able to welcome multiple new members and begin several online fundraising and awareness projects,” Kowal confirms.

While online connections provide comfort, vampires aren’t immune to the mental stress of a pandemic. “One of our counselors hosts twice-weekly de-stressor meetings where people can just come and talk on WebEx about what’s going on with their lives so we can see, hear, and talk with people outside of our immediate homes,” she says. Prior to the pandemic, the court founded the Semi-Fang Project, a take on Project Semicolon, to combat suicide and depression.

Once Texas gets back on its feet, the vampires are eager to get back to work. “We are ready to roll up our sleeves and get back to the work we love,” shares Kowal.

More than 200 miles away, Houston vampires are helping each other manage the financial instability that accompanies a global health crisis. “[We’re] trying to find ways to bring together what we can to help somebody out with keeping the lights on,” shares Kage. “Turning that energy inward has helped keep a lot of people’s heads above water.”

While reflecting on the history of vampires, Kage notes that before social media and TV, vampiric legends were shared by storytellers. “Some of the most common stories were about the supernatural; those were almost the superhero stories of history,” he reflects. And, perhaps, a look at the vampire community in Texas validates that point. In times of crisis, modern-day vampires are becoming their own kind of fanged heroes.