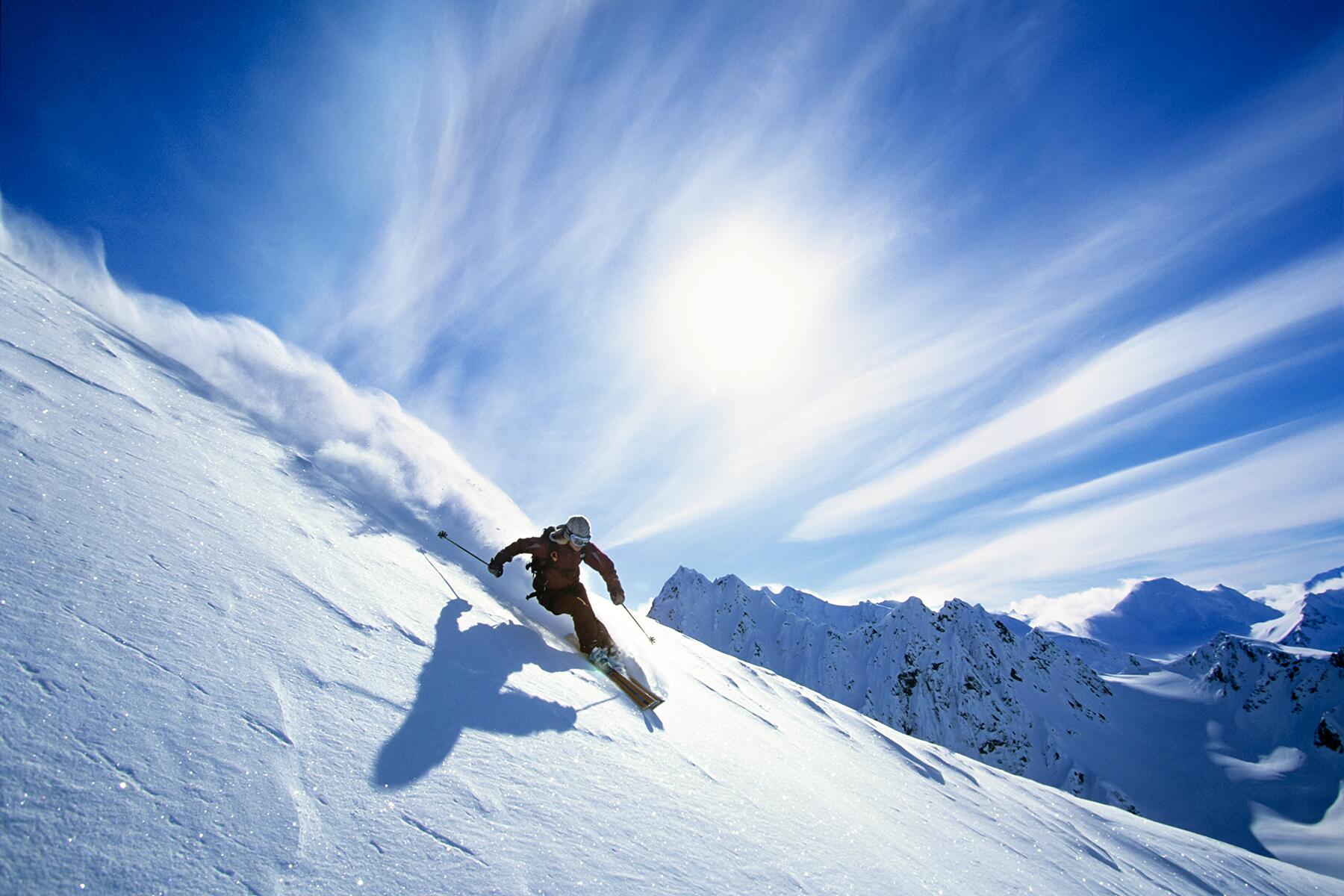 If you love the desert, solitude and abandoned places, plan your next camping trip for the wonderfully remote (and creepy) Big Bend National Park.

We love national parks. We love all the creepy, abandoned and eerie destinations North America has to offer. What better way to combine your love for both than by visiting the creepiest national park in America? Big Bend National Park, designated as an International Dark Sky Park, is one of the least visited national parks. Although it’s the seventh-largest national park in the continental United States at 1,252 square miles, it sees less than 500,000 visitors per year. In comparison, the Great Smoky Mountains National Park sees over 11 million visitors each year. You can expect trails to yourself and campsites with, possibly, one other tent in the dark desert. Solitude is the norm, not the exception.

If you’re going to Big Bend, you’d do yourself a disservice if you didn’t explore some of the offerings and aspects of the park that make it, in this national park lover’s opinion, America’s (wonderfully!) creepiest national park. 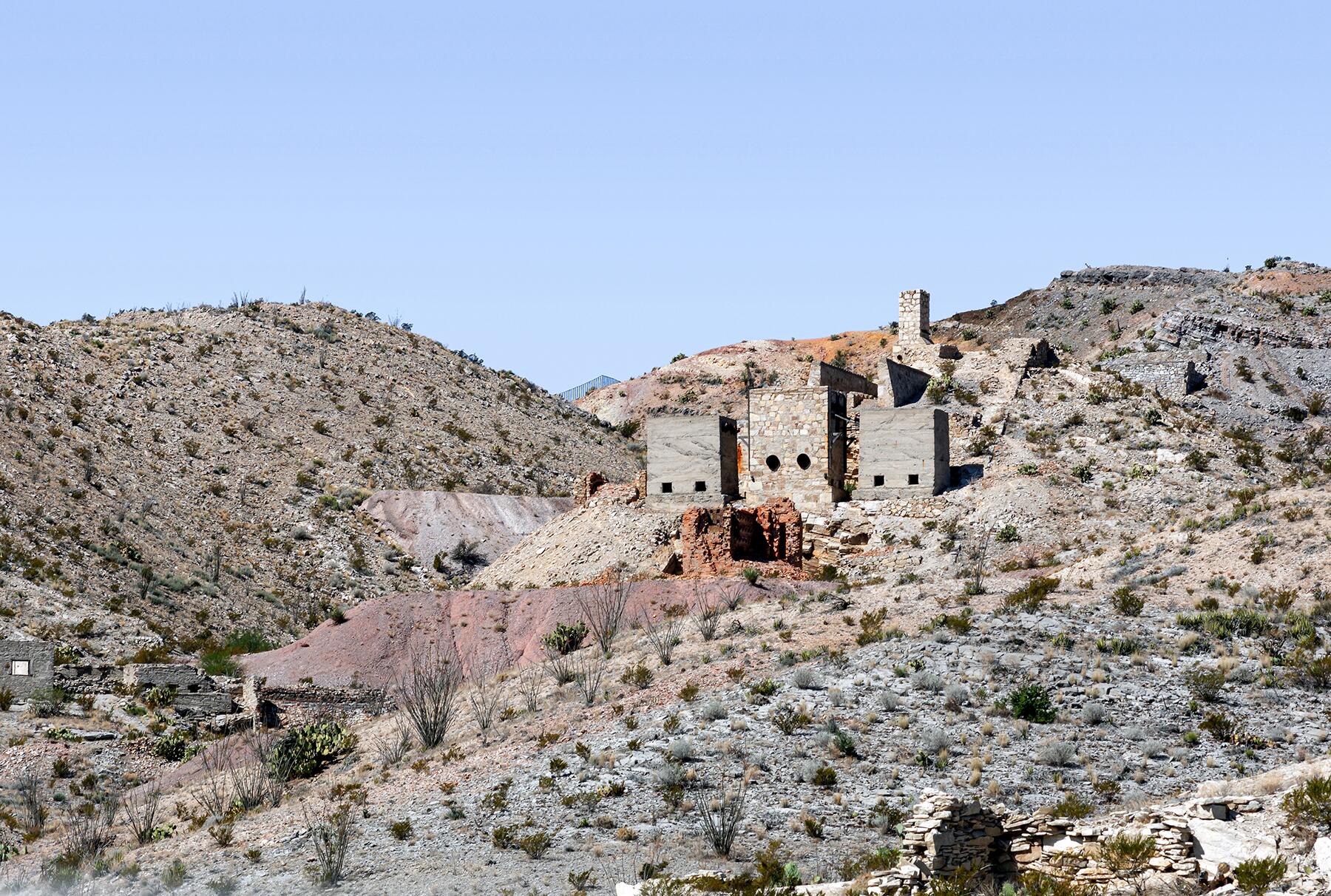 While you’re in Big Bend National Park, check out the Mariscal Mine–a once-active mercury mine in a rather remote area of the park. Unfortunately, it was laborious work and the working conditions were unsafe for the miners which led to many of them suffering from respiratory failure.

The mine closed in 1943, but a few buildings are still standing in which visitors are welcome to walk around. It’s completely abandoned and it’s hard not to think about the men who toiled here day after day. You’ll take the primitive River Road East to get there. The road is unmaintained, so you’ll need a high-clearance vehicle to make it. It’s only a 20-mile drive, but it’ll take you about 90 minutes each way.

INSIDER TIPYou can download a map of the remaining buildings on the Big Bend National Park website. 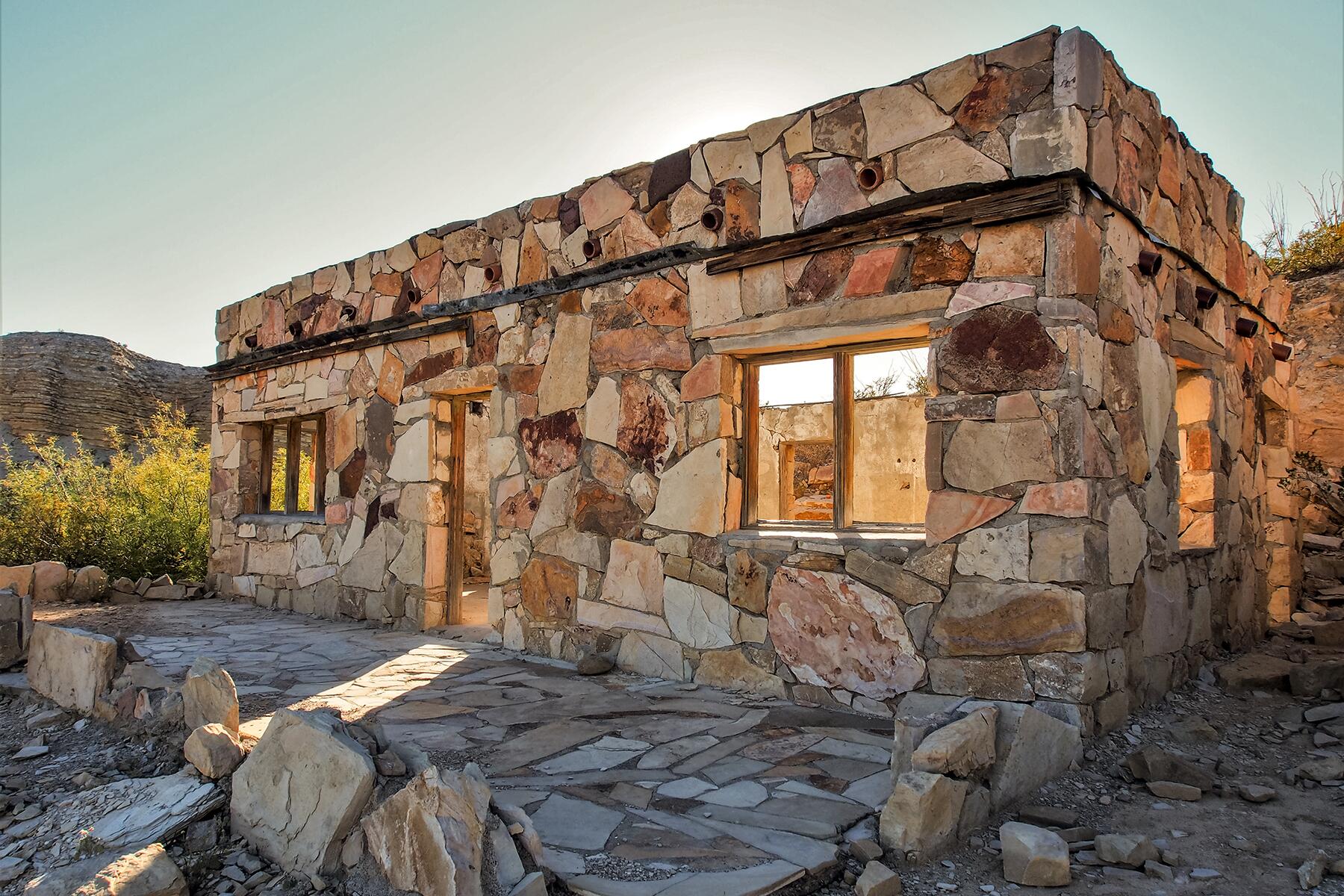 Langford’s Hot Springs, now part of what’s called the “Hot Springs Historic District,” was a thriving wellness center in the early 1900s. The proprietor, Joseph Langford, built pools and a few humble buildings at this site on the Rio Grande by the naturally-heated hot water pools. They’re warmed by geothermal activity and come out around 105 degrees F. For Langford, this was the perfect place to open his hot springs wellness business, promising all kinds of cures for any ailment under the sun. Some might call him an early entrepreneur while some might consider him more of a snake-oil salesman, but either way, the success allowed him to build a business in the area around the springs. At one point, it even had its own post office.

The business became part of the new Big Bend National Park in 1944 and shut down soon thereafter, with the bathhouse being removed by the park service in the early 1950s. Now, only a few rock walls remain, but fortunately, you can still sit and soak in the remains of the former resort. And if you’re wondering: yes, ghost sighting have been reported here.

INSIDER TIPAs with many hot springs, this one is unofficially clothing-optional. 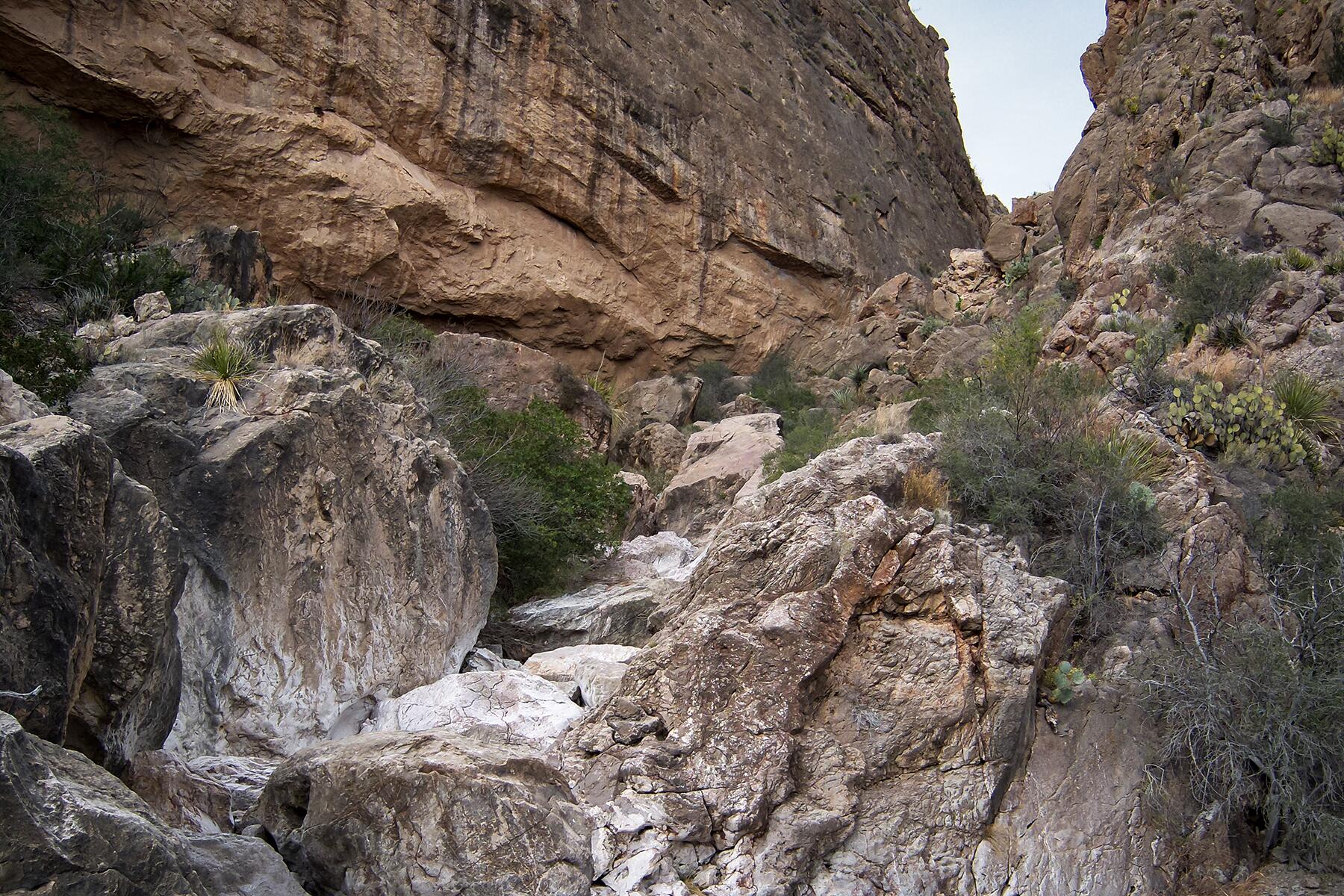 The Howling Spirit of Bruja Canyon

If you want to spook yourself, being alone in the wilderness of the park may be enough. But if you’re a real fan of giving yourself the goosebumps, head to the area of the park called Bruja Canyon, or “Witch Canyon.” Hikers have reportedly heard wailing here, and there were also reports of apparition sightings. Since the area here along the Mexico-U.S. border has been the site of several skirmishes, it’s no surprise that there are plenty of stories about who the spectral cries belong to. One of the eeriest theories is that the sounds are the ghostly wails of a Native American woman who drowned her children in the river canyon to prevent capture by the settlers moving into the area. If you want to hear the ghostly cries for yourself, come here at night.

INSIDER TIPBring a headlamp if you’re hiking at night. 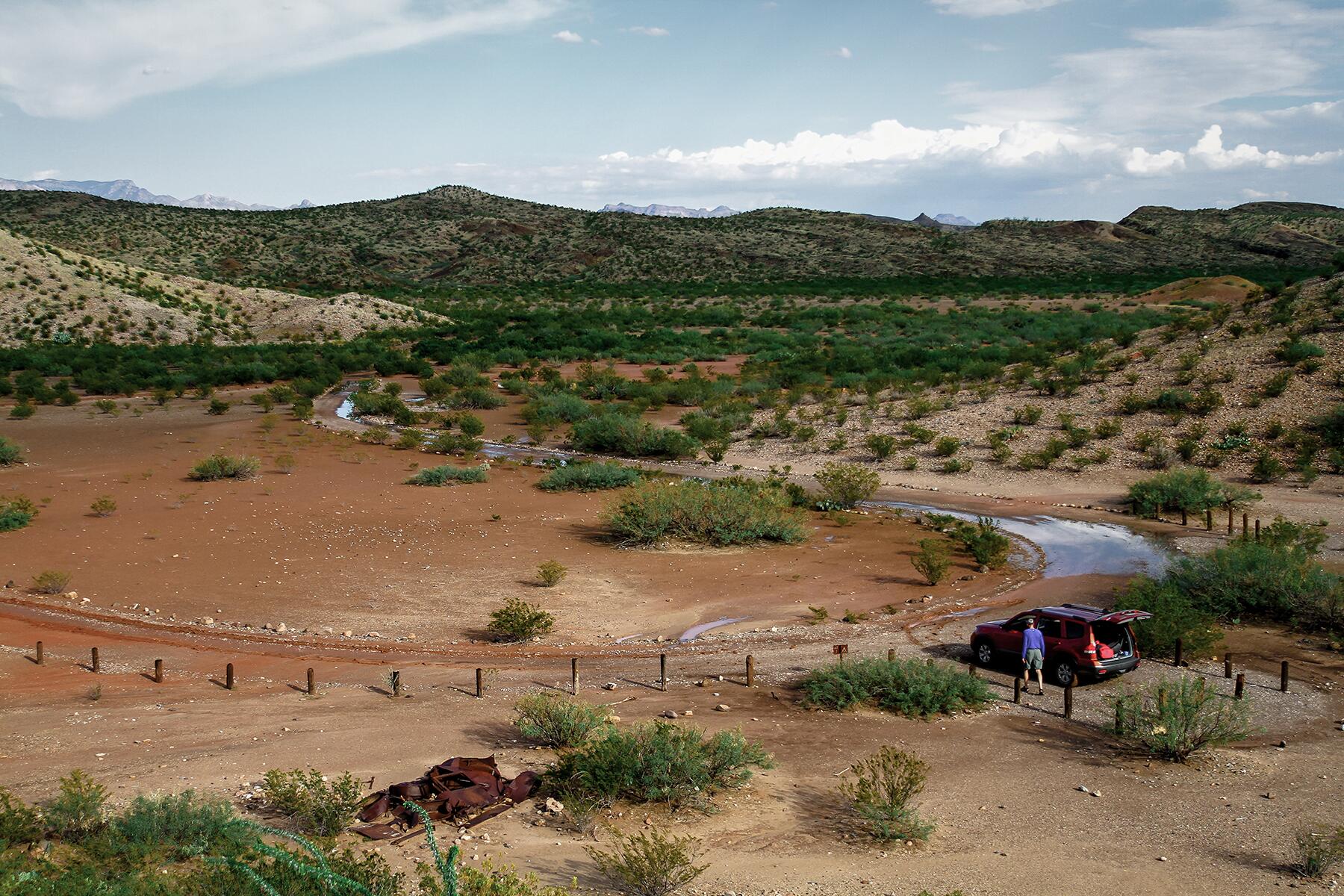 Camp in an Abandoned Town

Camping requires you to step out of your comfort zone. But most people can agree that camping alone in an abandoned town to be rather creepy, which you can do at the Terlingua Abajo campsite. The town of Terlingua Abajo (not to be confused with the campy ghost town of Terlingua outside the park) was a farming community that was enveloped with the creation of the national park. Campsites here are extremely primitive (read: no facilities, no shade, no water) and sit next to walls from the old buildings. There are still some old relics and belongings of the previous residents littered around the campsite. 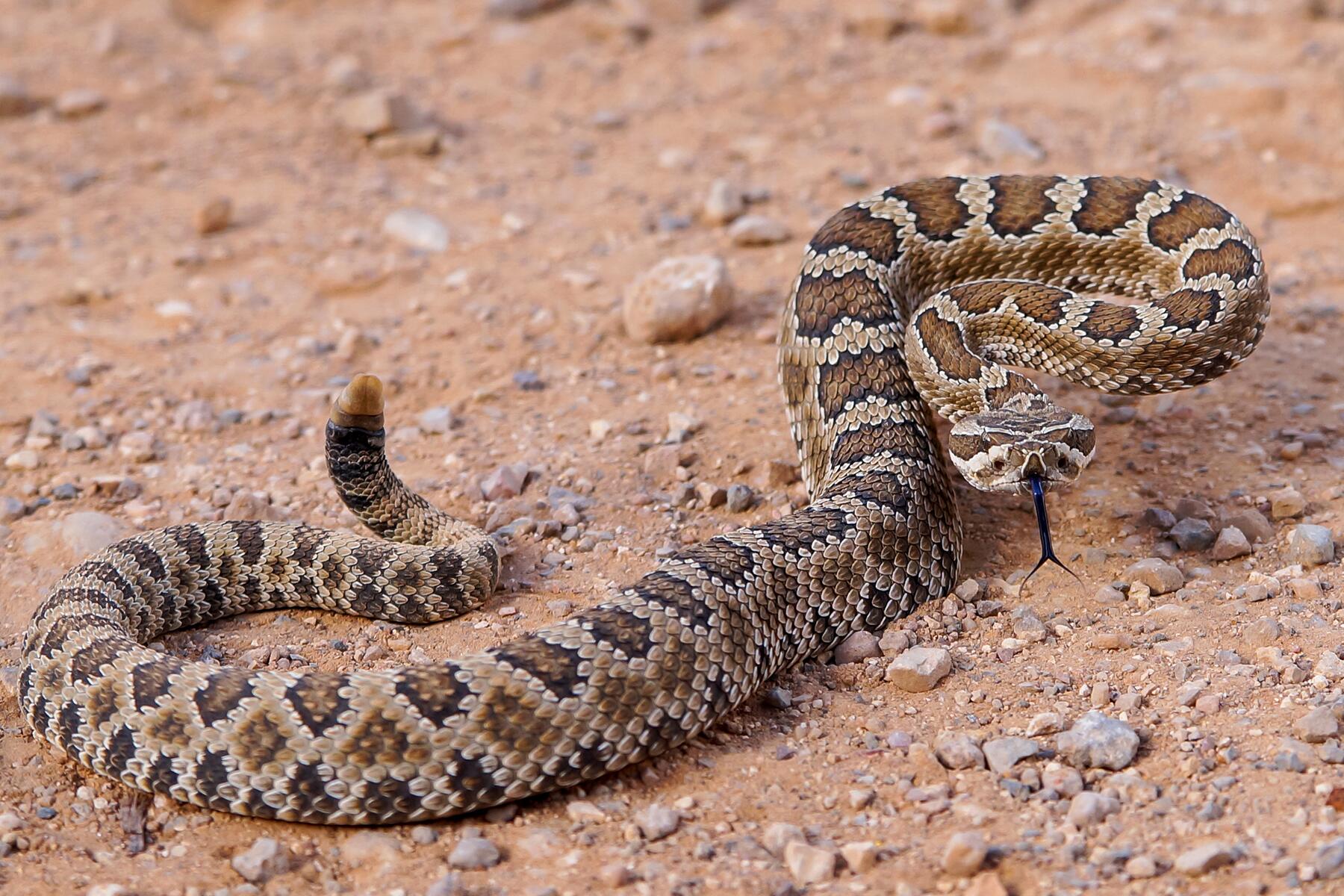 The Beautiful (And Dangerous) Mojave Rattlesnake

If you have ophidiophobia, you’re likely not going to be hiking or camping in the middle of Big Bend’s Chihuahua Desert, which has dozens of species of snakes native to the area. But even if you’re not of snakes, you’ll still want to keep an eye out for the Mojave rattlesnake. Also known as the Mojave green, it’s considered to have the most dangerous venom of any rattlesnake in the world. It spits venom that attacks your brain, nervous system, and heart and blood vessels. It’s called neurotoxic-hemotoxic venom, and it’s no joke: If you get bit, you need to drop what you’re doing and get medical attention immediately. Worse still is that this snake isn’t just found in the park–it’s common. They’re also prone to defending themselves, which means they strike more readily than many other species. Learn how to identify this snake and give it a wide berth if you see it slither across the trail. 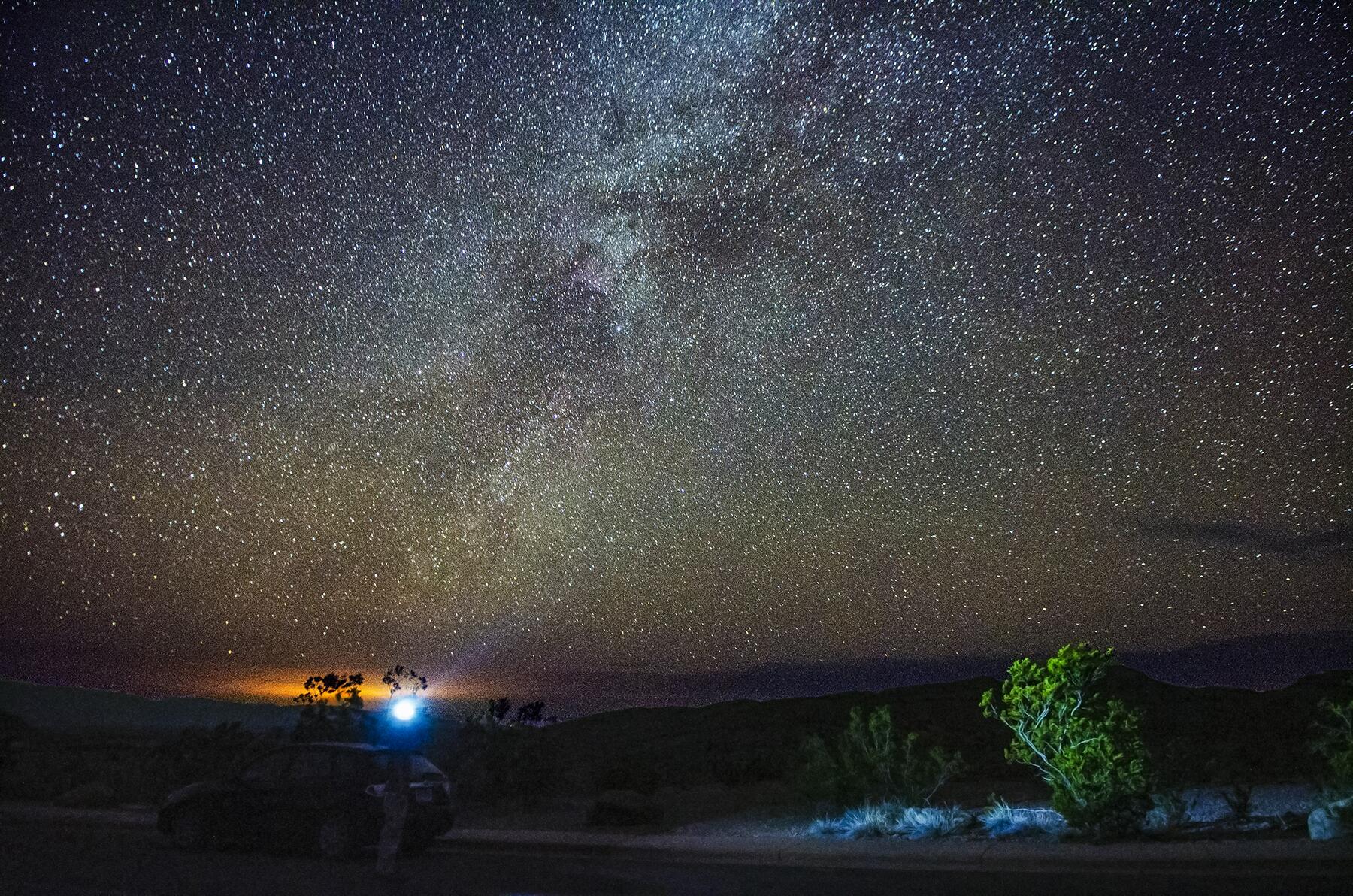 View the Darkest Sky in the Country

If you’re afraid of the dark, you may run in horror at the idea of spending the night under a tent in Big Bend, an official International Dark Sky Park. Or you might love it, as the stars and constellations are brighter here than just about anywhere else in the country, thanks to the complete lack of light pollution from surrounding towns (because there are no surrounding towns, of course.) An area can be designated as a dark sky park if it is particularly removed from unnatural light and offers exceptionally good viewing of the night sky.

If you dare to lay outside in the dark (perhaps you didn’t read the slide on Mojave rattlesnakes), you won’t even need a telescope to make out blue and purple constellations. You may want to download a constellation identifying phone app if you’re not quite sure which stars are which.

INSIDER TIPIf you’re camping in the park, you can attend a free guided ranger program in the evenings. The Park Ranger’s Guide to the Galaxy program runs on select weekends throughout the year and includes a constellation tour. Binoculars and provided to share if you don’t have your own. 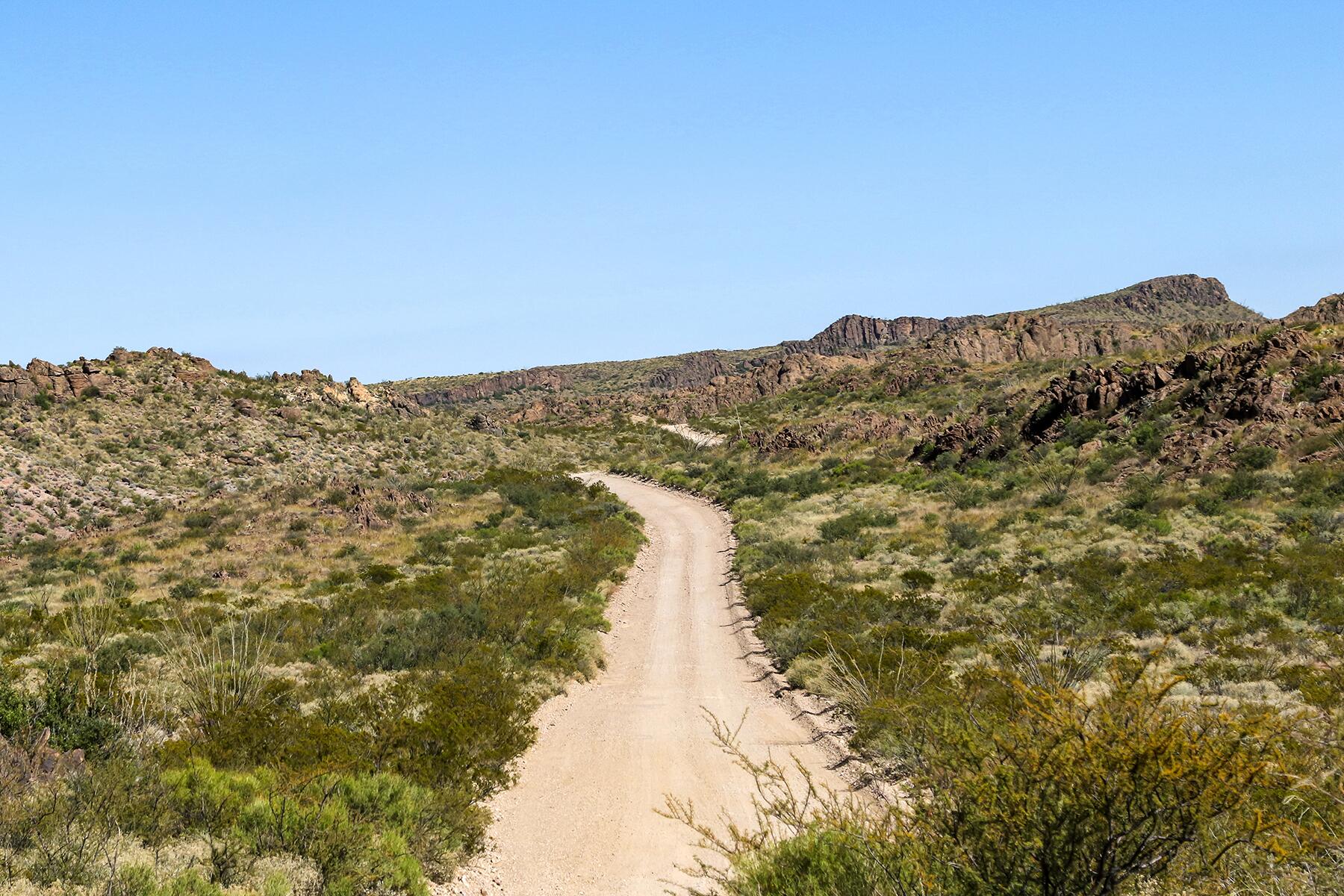 Get Lost on a Barely-There Road

While driving on the road in Big Bend, you’ll notice something right away: many are not exactly in ideal condition. In fact, more than 120 kilometers of the park’s roads are considered “primitive,” meaning they’re unmaintained. Not only will you need a four-wheel drive and very high clearance to drive on them, but you’ll also need to be prepared for potholes, stream crossings, or the road being washed out and unpassable. The roads are rarely patrolled so if your vehicle breaks down, you’ll need to be able to help yourself. While driving on the roads, you’re likely to see more jackrabbits than people, which offers a true sense of isolation and a chance for your thoughts to run amok.

INSIDER TIPBe sure to bring a jack, a spare tire, and plenty of water. 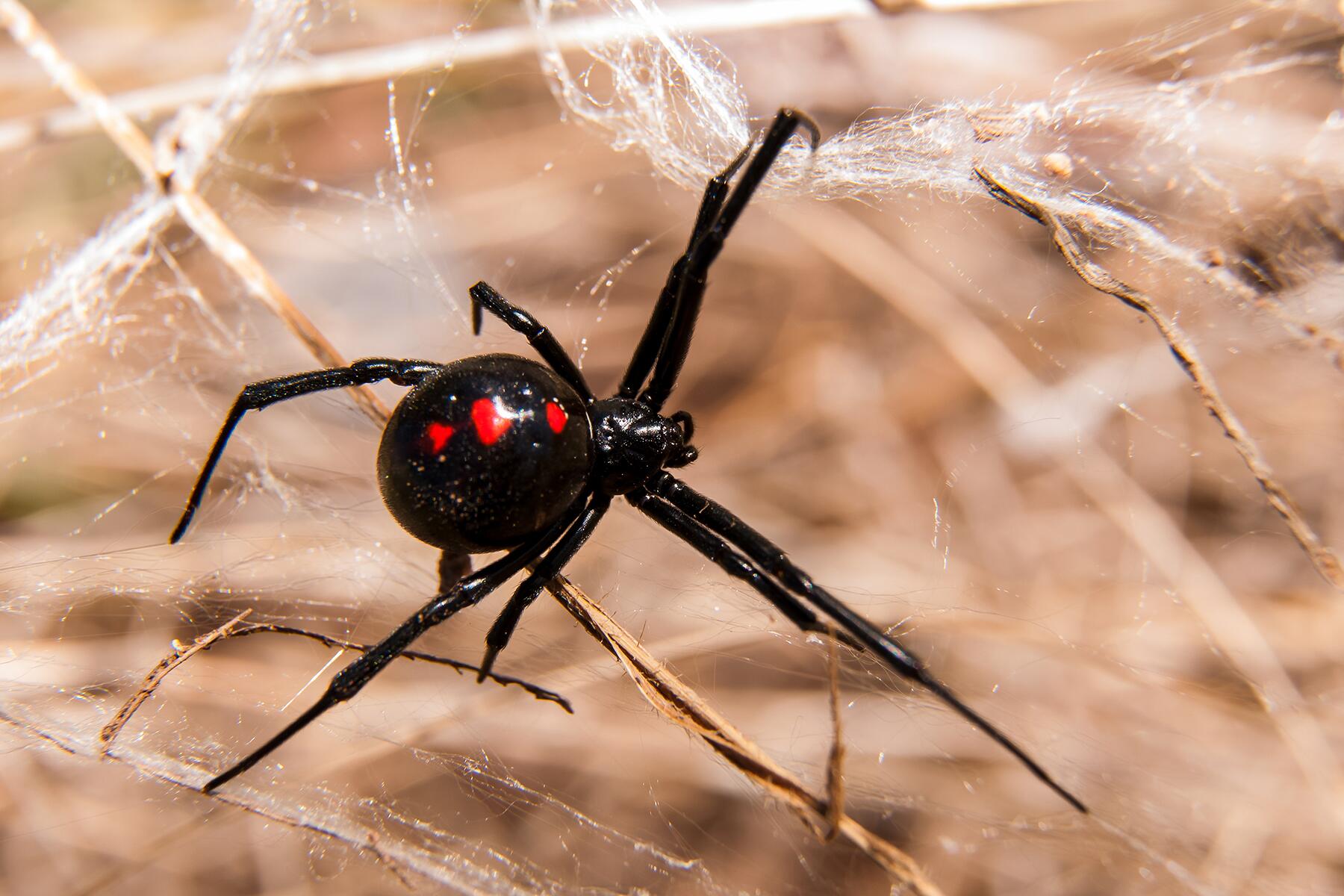 Say Hi to an Eight-Legged Friend

As the rangers at Big Bend will happily tell you, the park is home to more than 3,600 insect species and new ones are always being discovered. The most dangerous spider here is the black widow, a species considered more deadly than the park’s snakes. Fortunately, it’s easy to recognize because of its ominously bright red hourglass shape on its belly.

Of course, spiders aren’t the only creatures that may be right outside your tent at night. About 15 species of scorpions live in the park since the rocky, arid, desert is their preferred habitat. Most of the scorpions here won’t do any serious damage beyond some pain and swelling near the sting, but knowing they could be crawling just outside your tent in the dark is enough to make any camper double-check their zippers before turning in for the night.

INSIDER TIPSome scorpions glow in the dark. If you’re into bugs and want an extra-weird experience, walk around your campsite at night with a UV light and see if you can spot any. 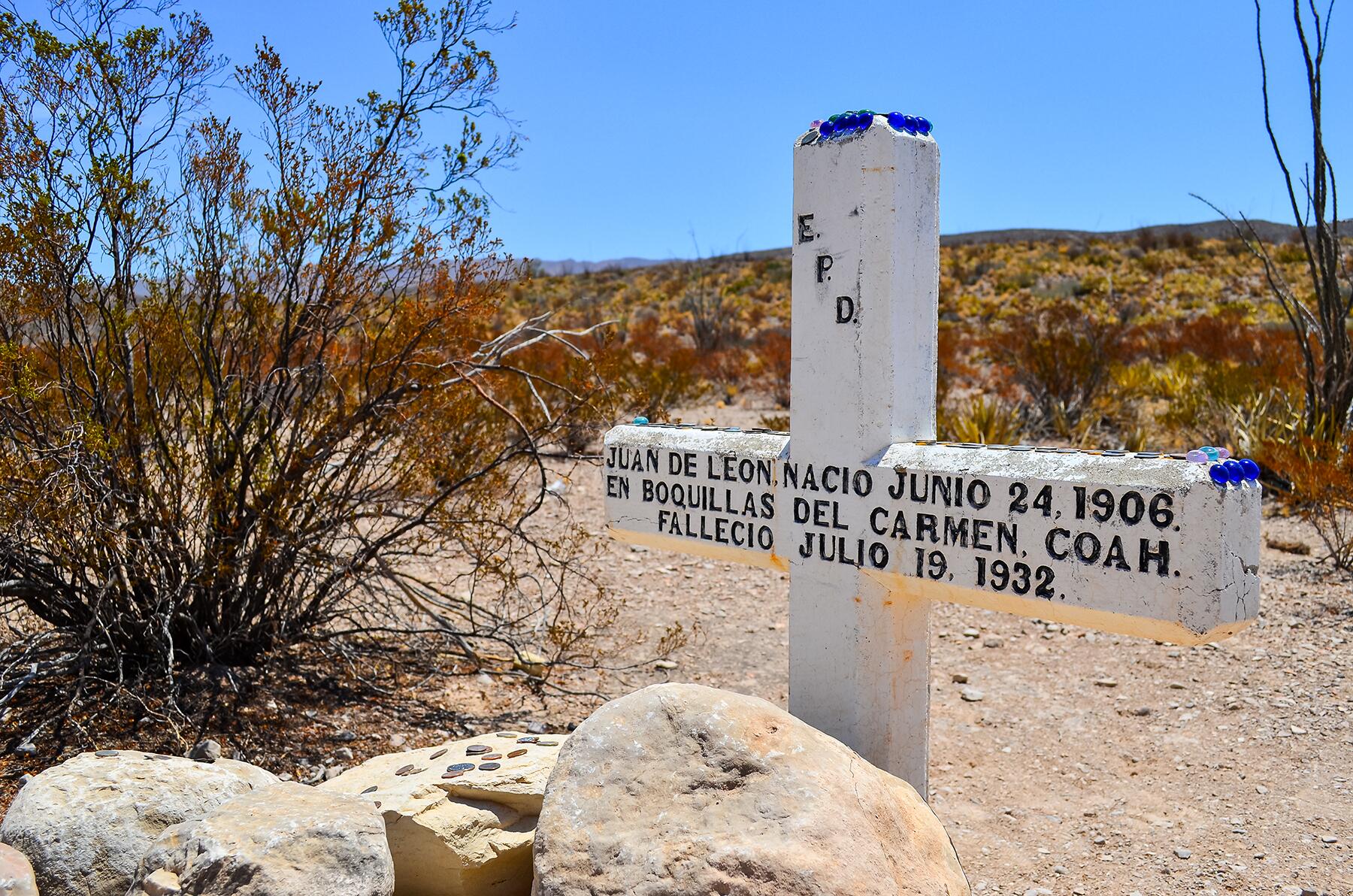 The Grave of Juan De Leon

No park could be a serious contender for the title of the creepiest national park in the country without having at least one mysterious gravesite. Big Bend’s mysterious tomb is that of Juan de Leon, buried in this exact spot in the park. There’s a rather morbid reason that this is his final resting place: his body was decomposed by the time his body was found and his remains couldn’t be moved. He died in 1932, but that’s about all anyone knows. There are a few theories around his death and it’s clear he died from a gunshot wound, but it’s unclear why or by whom. To find the small grave, take the undeveloped Old Ore Road about 10 minutes north of Camp de Leon.

INSIDER TIP: Believe it or not, there are dozens of unmarked or barely marked graves around the park, many of which date from the homesteaders who lived there in the early 1900s. They’re not on park maps, but some internet sleuthing should lead you to a few more macabre park locations. 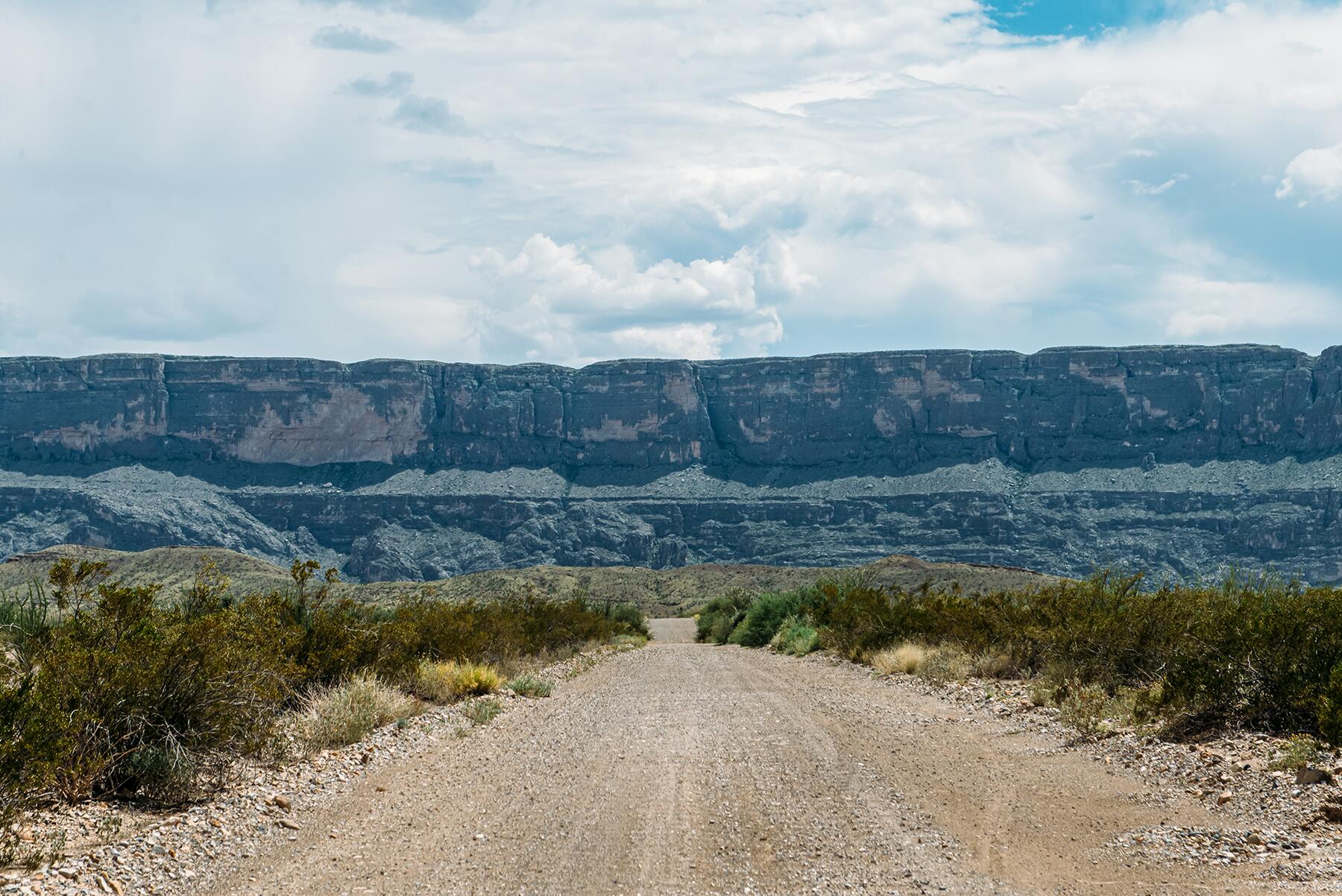 The Trails Can Kill You

To be honest, any trail in a national park can be risky if you’re unprepared or don’t know what you’re doing. But some trails in Big Bend National Park, like those in the Mesa de Anguila, will give even expert backpackers a run for their money. This is one of the least-explored areas of the park and the backcountry campsites here are little more than vaguely flat areas in the middle of nowhere. The trails are all quite challenging to follow and you shouldn’t even consider hiking in this area without the ability to navigate by the aid of a topographic mark–a trail map won’t get you very far. There’s also no water and no shade in this area, plus it’s rarely patrolled and accessed via roads that can wash out in the rainy season.

INSIDER TIPMake sure you know how to contact park rangers if you need assistance.