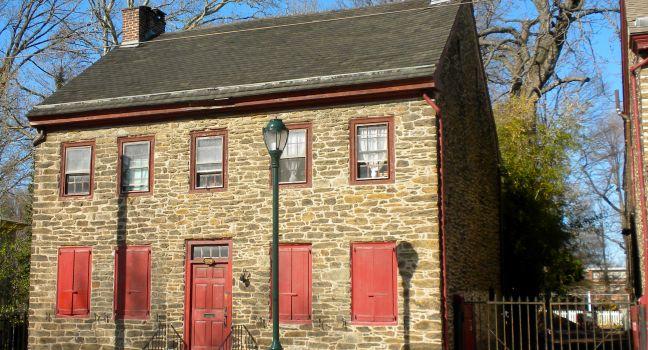 The blood of General James Agnew, who died after being struck by musket balls during the Battle of Germantown, stains the floor in the parlor of this Georgian house. Built by Philadelphia merchant and wine importer John Wister in 1744, Grumblethorpe is one of Germantown's leading examples of early-18th-century Pennsylvania-German architecture. The Wister family lived here for 160 years, and during the Revolution a teenage Sally Wister kept a diary that has become an important historical source for what that time was like. On display are period furnishings and family mementos, but probably the best part of the house is the large garden. Wisteria, the flowering vine, is named after Charles Wister (John's grandson), who was an avid botanist and amateur scientist, and there is plenty of it in the garden. There are also an enormous hundred-year-old rosebush, a peony alley, a two-story arbor with climbing clematis and a grapevine working its way across its base, and a number of tulips.

Book an Experience at Philadelphia VIEW ALL