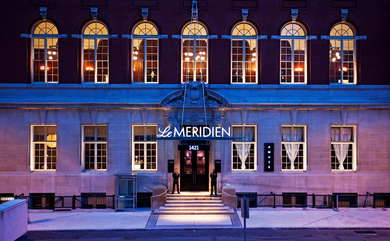 Opened in 2010, Le Méridien is a boutique alternative to the more standard hotels near the convention center. The 10-story hotel occupies an old YMCA built in 1908 and has maintained some of the original architectural character, such as ornate woodwork lining the archways of the airy lobby. It's a French-themed Philadelphia hotel that blends the building's inherent charm and modern decor comes with a bit of an art-deco twist. Landings for the upper floors are cantilevered to the original brick wall of a 75-foot atrium that fills the property's center with natural light; some rooms only have a view of this atrium. Rooms are posh and comfortable, if spare: some have only one mod chair besides the high-top desk chair. Southern-facing rooms have views of City Hall. Wi-Fi is complimentary in the lobby and throughout the building with guest login. This upscale hotel in a Georgian revival building features a stylish brasserie, free Wi-Fi in public areas and a 75-foot central atrium courtyard.

YOU SHOULD KNOW While centrally located to all of Philadelphia's tourist hotspots and blocks from City Hall, the hotel is just next door to a sketchy area and therefore tourists should exercise street smarts. It's totally safe inside the hotel and of course around the city.

Around three-quarters of the rooms have tubs, others have walk-in showers with standard pressure heads. Bath products are New York's sleek Malin + Goetz.

The Lobby of Le Meridien Philadelphia is a stylish combination of modern and historic. The rich woodwork of the 24 foot high ceilings and walls are original to the 1907 Georgian Revival-style structure. The modern dark blue leather accents and artwork compliment the multiple original gas-powered fireplaces that serve as beautiful-but-functional artwork for the impressive space. There are two art-deco style chandeliers decorating the lobby. There is not a 24-7 concierge just two standard check-in and one preferred guest check-in agent.

The 24-hour gym has free weights, towels, earbuds for use and lifecycle cardio equipment that includes treadmills, ellipticals, and stationary cycles.

YOU SHOULD KNOW The gym is tiny for fitness freaks out there, but it has everything you need but personal trainers, staff, a stretching area, and classes.

aMuse restaurant and bistro is also situated in the lobby level, just around the open-air corner from the centrally located bar. Glass walls provide a bit of privacy. Hell's Kitchen winner Chef Jennifer Salhoff has created a classic French menu, full of standards like moules frites, bouillabaisse, fried oyster po'boy, salad lyonnaise and croque madame. The kitchen strives to be scratch and local. The vibe of the restaurant is reminiscent of the early 20th century. The restaurant serves breakfast, lunch, and dinner. The hotel also offers 24-hour full room service menu.

The bar at aMuse offer seasonal creative, elegant cocktails, many named after Philadelphia and national celebrities and an imaginary corporate hotel muse named Jaqueline as in "Jacqueline's favorites." There is an in-house sommelier to offer suggestions and information about the wine collection. For cocktails, a smoking machine for various smoked cocktails. The 200 plus wine list is extensively French, and while no beers are on tap, there is a local beer list alongside an artisan and imported beer list served in proper glassware. The popular bar has friendly knowledgeable staff and offers customized bourbon and whiskey cocktails feature smoked cocktails and are named after Philadelphia legends.

Everything you’d visit Philadelphia for is within walking distance. There are also readily available taxi’s waiting, Uber and Lyft are also available. Suburban Station is less than a block away and public transportation is prevalent and easy as it's all at City Hall for the Market-Frankford line to get East and West and Orange line to get South and North.

The speakeasy-themed Franklin Mortgage Company (12-minute walk) features an open tiki bar upstairs and a sleek minimally advertised cocktail bar downstairs. The Chinatown speakeasy Hopsing Laundromat (11-minute walk)is a true speakeasy with a 70 plus cocktail menu, a Vietnamese-American owner named Lê who claims to be North Korean and a strict entrance policy. The Good Dog Bar (8-minute walk) is an upscale dive bar and it has nothing to do with hot-dogs but features an extensive craft beer list, knowledgeable bartenders, and a pup theme.

The food and beverage staff is passionate and knowledgeable. The location for Center City can't be beat and the French theme of the bar and restaurant are fun and sexy, it's the only hotel resto/bar in the city to have such a specifically Francophile theme. The digs are cozy too.