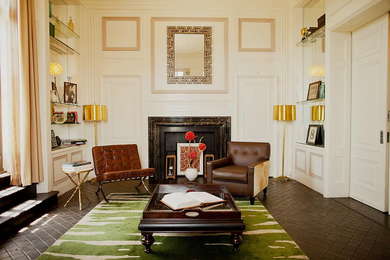 The Palomar is the sister property to Hotel Monaco-both Kimpton properties and uber-hip hotels, though it's the more subdued and less exciting of the two. Three brightly colored busts of Ben Franklin greet you in this Kimpton property's chic lobby alongside a comfy fireside living room. Touches of purple enliven the bright guest rooms, which have stylish modern furnishings. But it's not all about looks—the hotel staff is über friendly and helpful. Cool amenities abound auto sensor temperature controls, locally made products in the minibar, and leopard-print robes. The hotel offers yoga mats in every room (virtual classes on-demand) and sponsors a manager-led 3-mile "Rocky run" to the Philadelphia Museum of Art steps by appointment. Kids get a free toy at check-in, child-sized leopard-print robes, and "cookie currency," which enables them to purchase cookies and milk from room service. Complimentary wine is served at 5 pm in the lobby. There is also a bar in Square 1682, the hotel's on-site restaurant that's known for its New American cuisine and happy hour scene.

Rooms have clean lines, crisp textures, and a neutral palette with pops of green and purple. Beds are signature Kimpton mattresses and down pillows with Frette sheets. Two terrycloth and microfiber robes are cozy and available for purchase. Umbrellas are available too but $45 if they don't return.

"Raid the Bar" is a $10 credit for IHG elite members, most use if for water which Kimpton Philadelphia hotels do not provide gratis. The water is in the lobby or tap so bring a bottle. IHG members also get a preference of pillow type and room location.

Marble sinks, atelier bloom products and most standard rooms have a pressure shower and tub combo with large quantity amenities in an effort to be more eco-friendly.

The lobby is a thoughtful renovation of the pre-existing 1929 Art Deco Architects building, it has sustainable furnishings and all of the artwork is done by Philadelphia artists. The color scheme is earthy and muted.

Complimentary PUBLIC bicycles available to guests during their stay.

Hotel Palomar partners with Relax and Rejuvenate Spa is available by ordering online or an 800 number.

Hotel Palomar provides a yoga mat for use during your stay and can also fetch you yoga blocks or even unroll the mat for you. There are also customized Philadelphia jogging maps and manager-led Rocky runs, upon request.

The partner restaurant for breakfast, lunch, and dinner is Square 1682, located adjacent to Hotel Palomar and named in honor of the year Pennsylvania’s founding father William Penn founded the city. It's Philadelphia’s first LEED-certified green eatery and bar and while muted and chic its Modern American cuisine is underwhelming and can even be oversalted.

Square 1682 serves creative cocktails alongside beer and wine but nothing is outstanding. Wine is served daily between 5 and 6pm alongside truffle buttered popcorn.

It's a 5-minute walk to SEPTA's orange line that takes you to the stadiums in the south. The hotel has its own taxi stand for easy access to hip neighborhoods like Fishtown and Northern Liberties. Car services are available for day tours and trips as well but not on call a la Uber.

Cleavers (2-minute walk) is the newest and a fave for cheesesteaks and boozy milkshakes. The legendary Reading Terminal Market (10-minute walk) has outposts of some of the best restaurants in Philly and is a foodie mecca. Stephen Starr's LOVE (2-minute walk) offers upscale farm to table.

The new Concourse (7-minute walk) is an indoor adult ball pit/bar. Time (10-minute walk) is a three-level bar for lounging, dancing and live music. The Graffiti Bar (8-minute walk), Michael Schulson's bar accompanying his pan-Asian masterpiece Sampan, it's down a narrow alleyway with outdoor seating only but the awesome Asian fishbowl drinks are worth checking out.

Kimpton's “Forgot It? We’ve Got It!” for forgotten essentials like curling irons, sewing kits, collar stays, and fashion tape is still the best in the business. It's pet-friendly, and unlike its sister property the Hotel Monaco, it's more of a place to refresh and rest than to hide away from the city. Hence it's popular for weddings and events in the city as it's located steps away from all the hotspots.