Capture the rapidly fading Borscht Belt era of the Catskills at these spots that hearken back to the good old days.

Like most women born in the 1980s, I have a deep and abiding love for the movie Dirty Dancing. Patrick Swayze (RIP), pre-nose job Jennifer Grey, and iconic lines like “Nobody puts Baby in the corner”—what’s not to love? But for me, it was personal. My great-grandparents actually owned a Catskills resort like the fictional Kellerman’s. It was called the Kantrowitz House and it catered to New Yorkers—mostly Jews—looking for an escape from the summer heat. My grandmother and her four siblings grew up in the hotel, which was in the small town of Woodridge, New York, and lived through the Borscht Belt heyday of summer swims, Saturday night dances, and legendary comedy performances. While the hotel closed long before I was born, my extended family spent summers at our five-bungalow colony in nearby Hurleyville. Innovations in air conditioning and air travel that took New Yorkers to other destinations contributed to the region’s demise, with nearly all of the resorts closing by the end of the 20th century or shortly after. Today, parts of the Catskills are undergoing a resurgence: There are yoga retreats, farm-to-table restaurants helmed by Brooklyn chefs, and “makers” with Instagrammable shops attracting a whole new type of clientele. But for those who are after the old school Catskills, the one depicted in Dirty Dancing and season 2 of The Marvelous Mrs. Maisel, the one from the 1950s—there are a few places still lurking that capture that essence 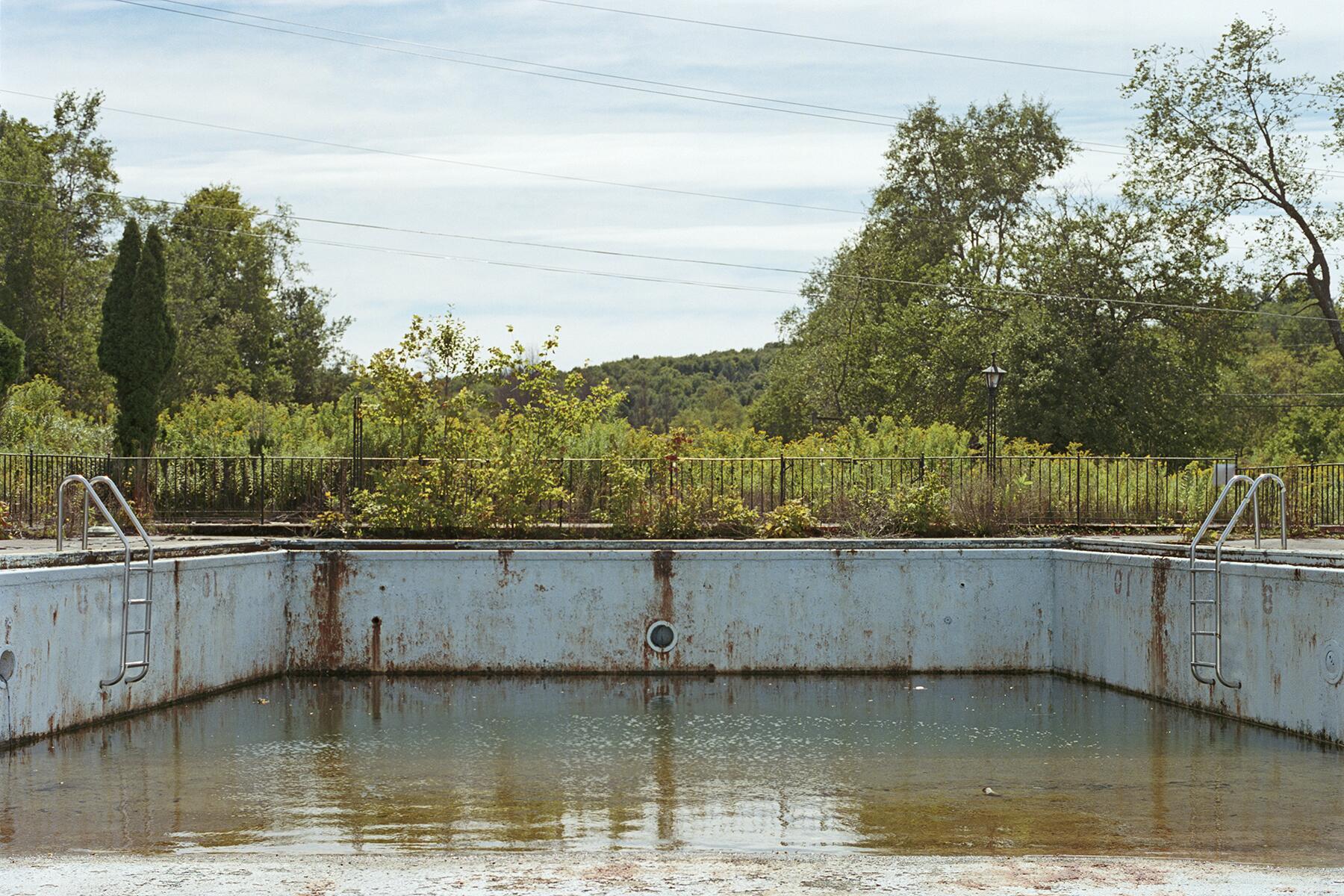 Hundreds of hotels closed from the 1970s on in the Catskills. Many were simply abandoned when owners went bankrupt, and as time wore on, the buildings were slowly reclaimed by nature. Some are still there, including the Paramount Hotel, which managed to survive until 2000 when a fire ravaged a large part of the property and the owner was forced to close. Today, visitors can drive through mostly empty town of Parksville and observe the remains of the hotel. It makes for some interesting photos, as evidenced by Marisa Scheinfeld, who published a book of photographs of abandoned Catskills resorts called Borscht Belt in 2016. 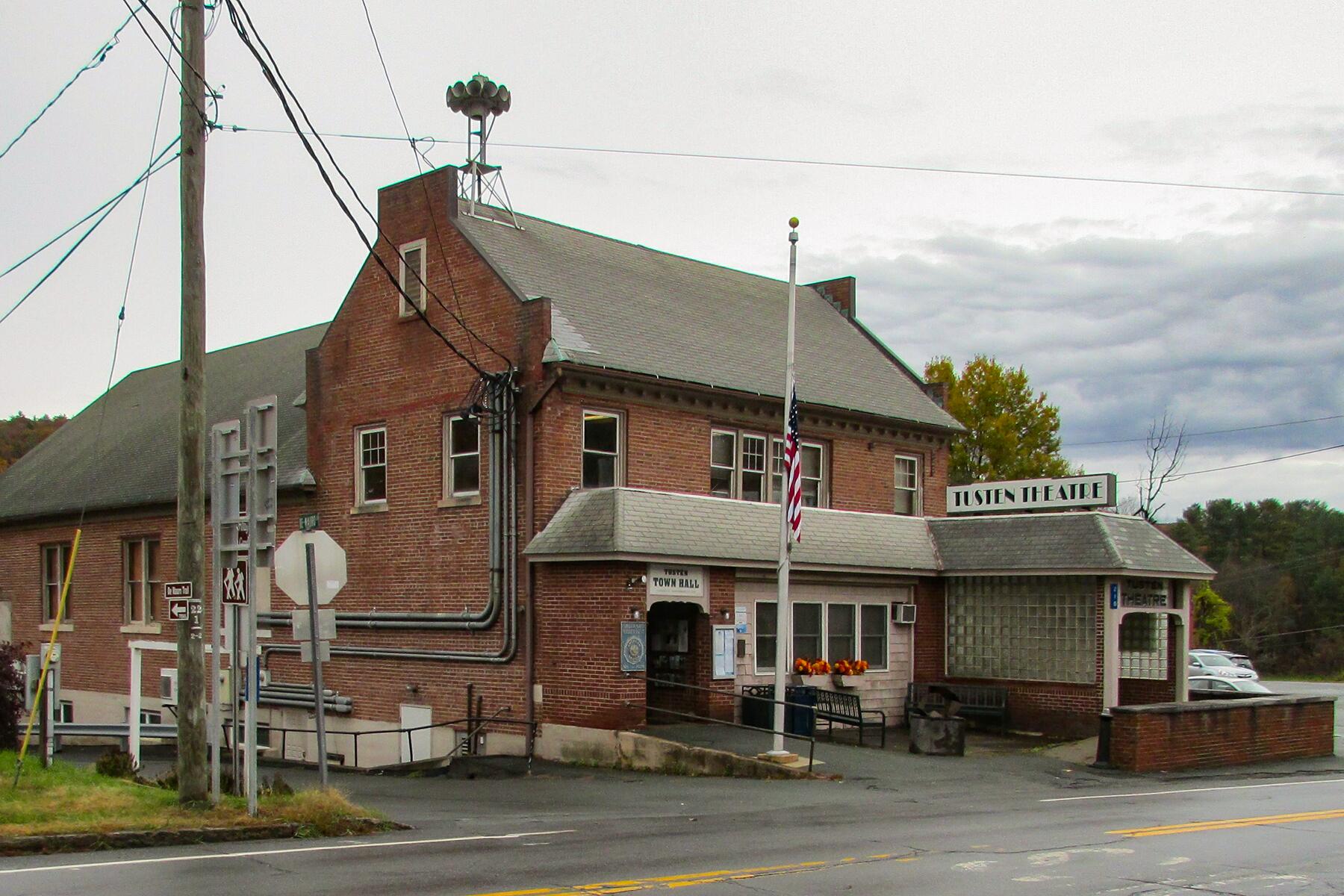 An Art Deco theater built in 1926 and originally called Community Hall, Tusten Theatre became a movie theater in the 1930s and lasted until 1985. In 1987, the Delaware Valley Arts Alliance (DVAA) leased the theater portion of the building and renamed the space Tusten Theatre, reopening in 1990. Today, it seats 150 patrons and hosts a summer schedule of jazz, opera, theater, and an annual film festival.

Home to various hotels and resorts, the hamlet of Swan Lake houses a collection of artifacts and photos that tell the history of the area inside the Swan Lake Historical Pavilion. There are separate sections for each hotel that was there, with photographs, postcards, documents, and other items on display. Travel back in time as you peruse the memorabilia and relive the glory days.

INSIDER TIPThe Sullivan County Historical Society is another treasure trove of artifacts from the region. 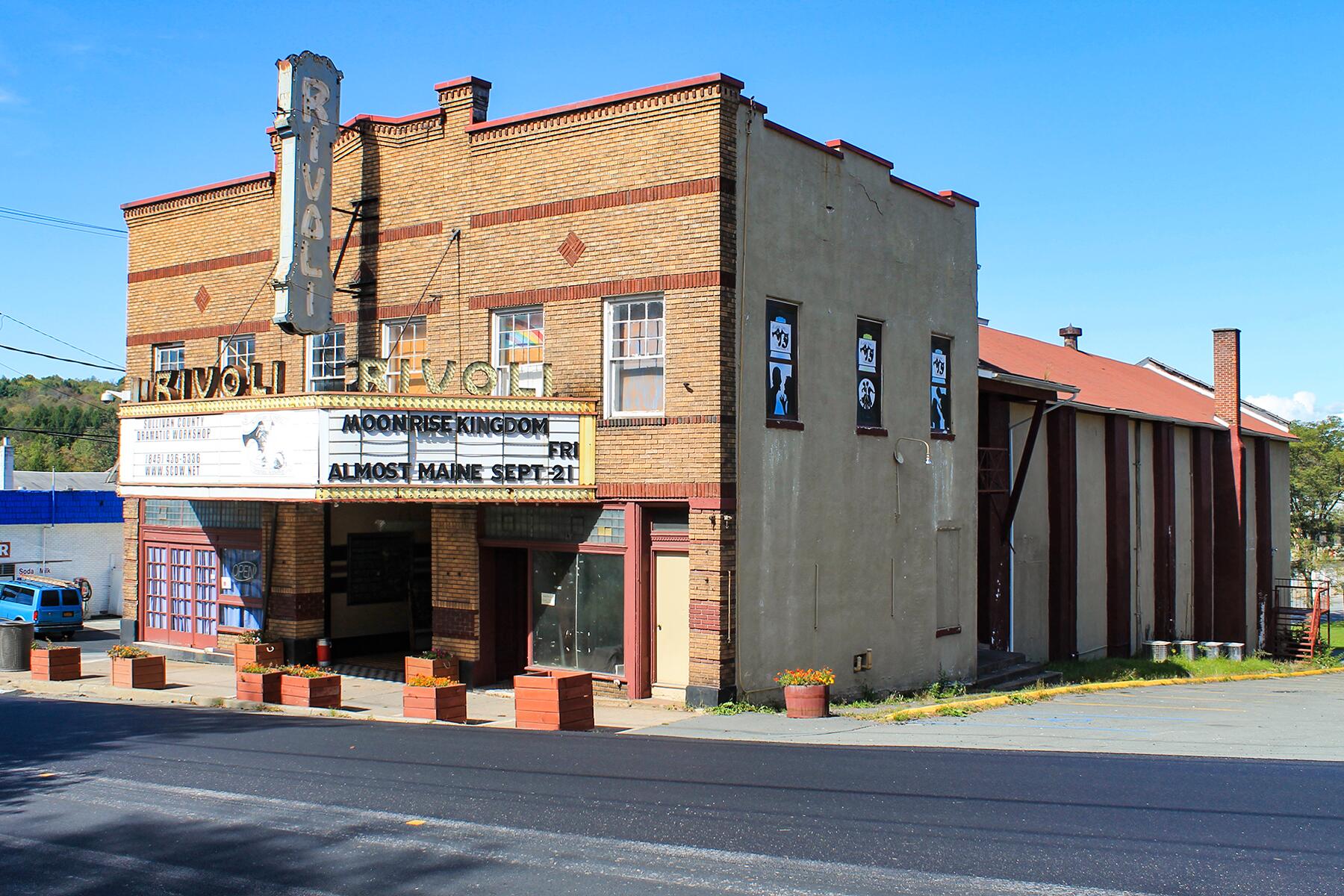 Catch a show at the timeless Rivoli Theatre, which was originally built in 1923, with an expansion added in 1937. The current three-sided metal marquee is from the 1950s, the vertical neon sign is original, and the auditorium reflects the 1937 Art Deco design. The Sullivan County Dramatic Workshop purchased the theater in 1998 and added heating and cooling system, as well as sound and lighting. The theater is very much active today, with theatrical performances that include plays by everyone from Shakespeare to Sondheim, as well as comedy, live music, and special holiday shows on Halloween and Christmas.

Capture the past—or at least browse through it—at some of the area’s many antique and thrift shops. And we don’t mean the kind of trendy vintage shops like they have over in the Hudson Valley. Sift through piles of furniture, lighting, clothing, pottery, glassware, vintage prints and fabrics, and mid-century items at the three-story Antique Center of Callicoon or the two-level Town & Country Antiques in Liberty’s historic district—the store’s sign is a perfect mid-century relic in itself. For something more manageable, try Gayle’s Vintage Goodes in Smallwood or Laughing Ladies in Mongaup Valley.

INSIDER TIPDriving down some of the area’s Main Streets is a good bet for finding more antique shops—who knows what you might find! 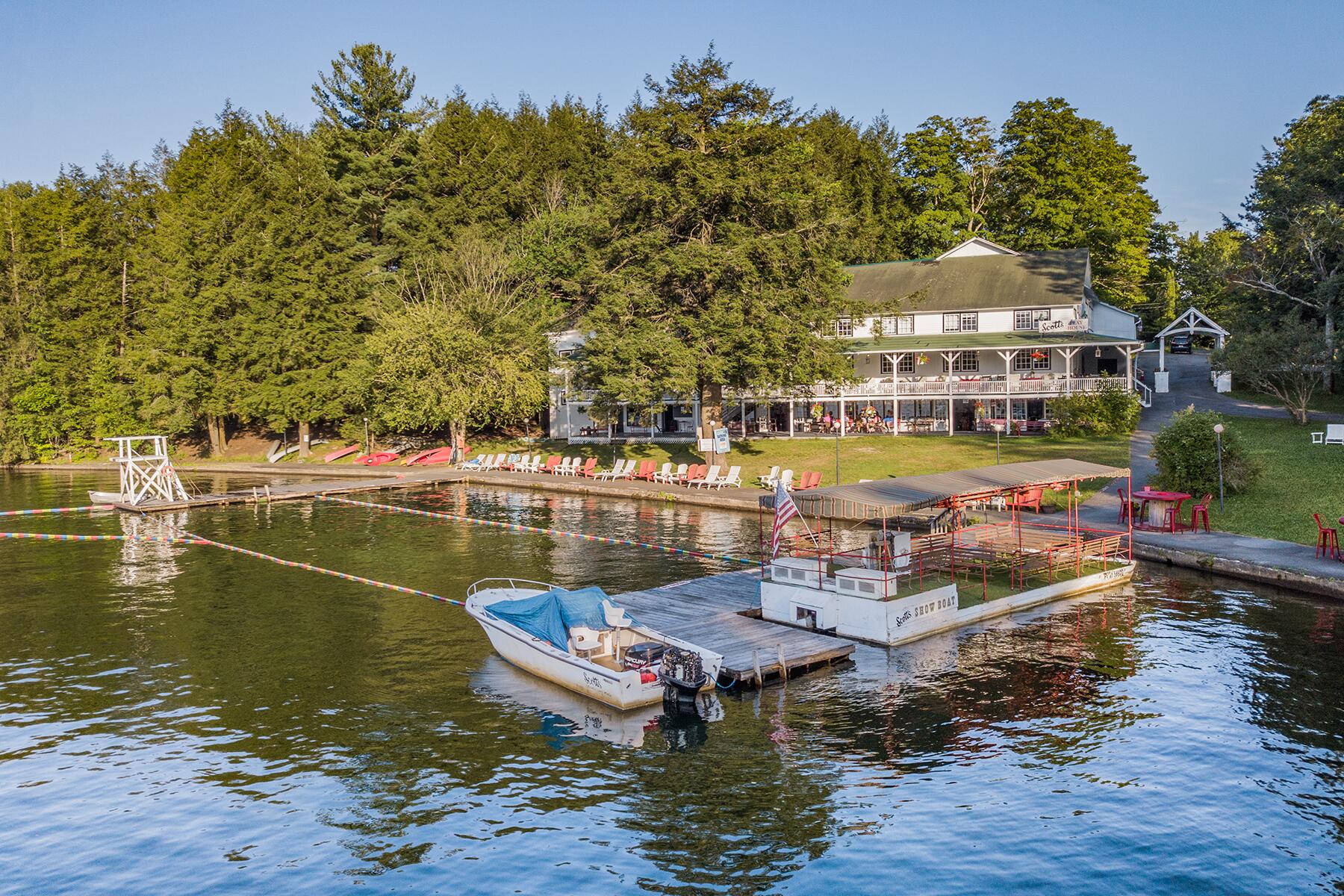 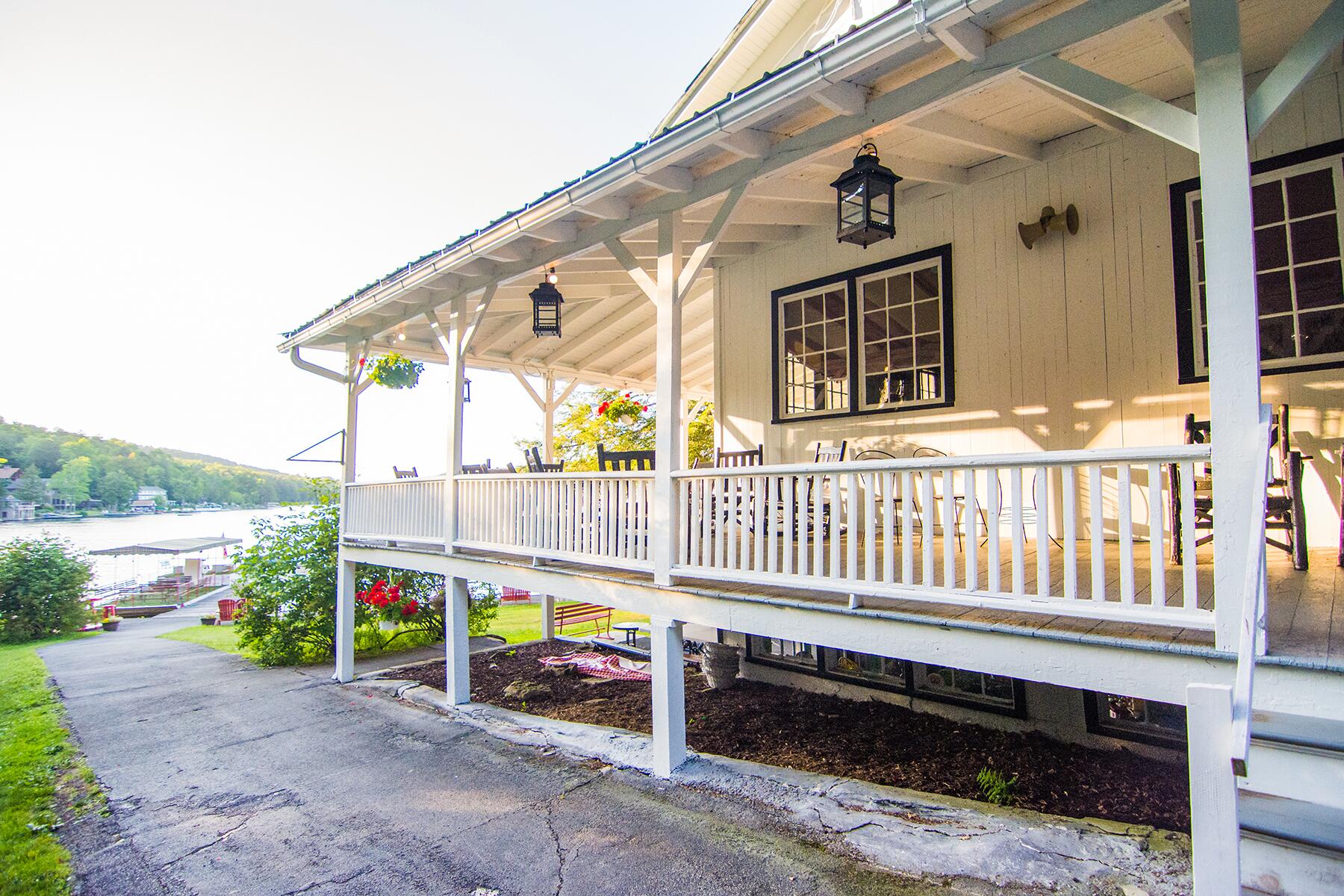 Although Scott’s Family Resort is in the Western Catskills in Delaware County, about an hour west of what was the center of the Borscht Belt of yore, it might be the best representation of a typical family resort that’s still standing—and it dates all the way back to 1873. Which is probably why The Marvelous Mrs. Maisel chose it to film its three-episode arc in season 2, when the family goes to summer in the Catskills. Book a few nights (or weeks, for the true 1950s Catskills experience) in a charming cottage and enjoy beautiful Oquaga Lake, the Playhouse (which has everything from bowling to shuffleboard to arcade games), and the Show Boat sing-along cruise, a tradition since 1932. And just like the old days, it’s still all-inclusive.

This place is retro to the max. Sundaes Restaurant and Ice Cream Parlor maintains the look and feel of a ’50s classic car diner, with a black and white tiled ceiling, red leather booths, and antique tin signs covering the walls. In addition to soft and hard ice cream in numerous flavors, there’s also pizza, burgers, and duck fat fries to indulge in.

INSIDER TIPOn Wednesday evenings from 4-8 pm the restaurant gives free ice cream to anyone who pulls up in a classic car, attracting loads of them who set up in the parking lot 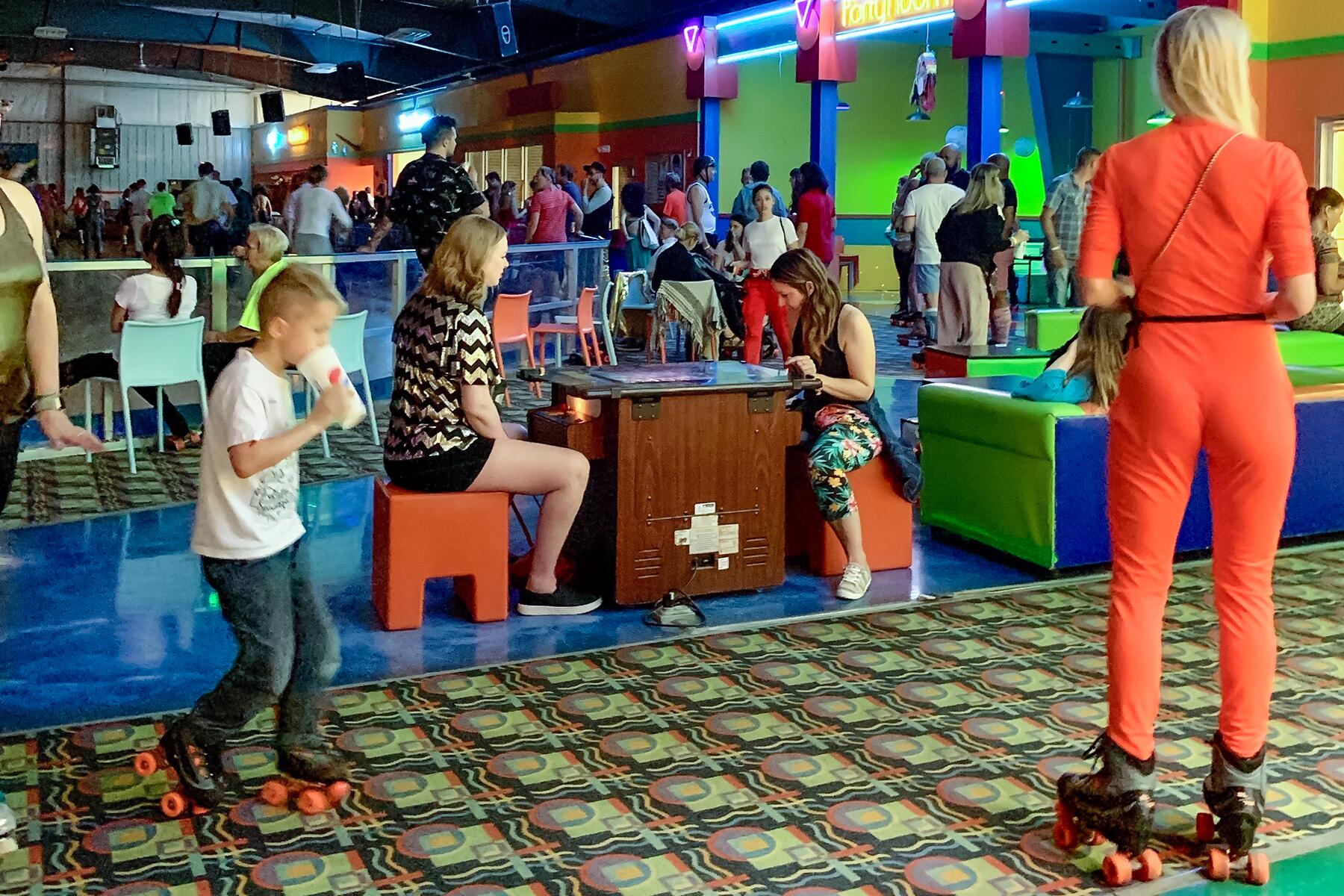 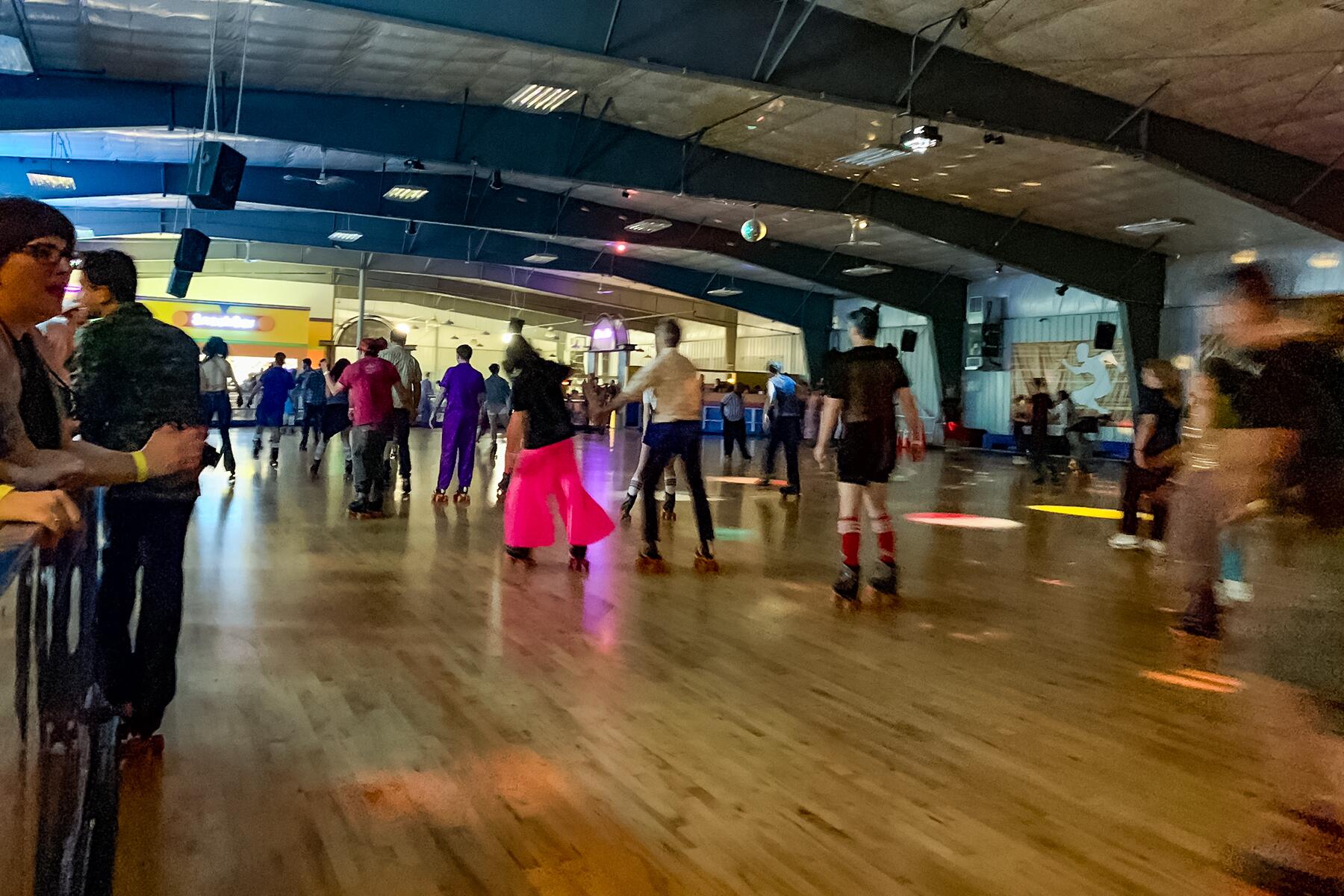 If you’re trying to recapture the 1950s, it should go without saying that rollerskating needs to happen. And besides, if you can’t dirty dance, rollerskating is the next best thing. Thankfully Skate Time 209, an old school roller rink in the Catskills, hosts roller discos, roller derbies, and open skate times. Rent skates ($4) or bring your own to glide along the smooth wooden rink to danceable tunes. There’s also an arcade and a menu of wine, beer, and snacks.

To experience the contemporary Jewish orthodox scene, head to these kosher restaurants across the street from each other. Dougie’s serves burgers and grilled fare, while Jerusalem II has pizza. During the summer, both restaurants—and the whole block, really—are packed with camp counselors on Saturday nights and the scene is bumping. Take note: these restaurants are only open during the summer season, but they both have permanent outposts in Manhattan.

This red sauce Italian joint actually opened in 1980, but it’s definitely one of the oldest Catskills restaurants still in business, lending it a frozen-in-time quality. Located on Main Street in Hurleyville, a tiny street in a tiny town, Frankie & Johnny’s (also called Nardi’s) has been owned by the same family for 30 years. Service can be salty, wood-paneled walls are punctuated with framed historic photos, and portions of classic dishes like eggplant rollatini, calamari fra diavolo, and baked ziti are huge—come hungry and expect leftovers. And don’t forget to order the garlic bread.

Part of the joy of the Catskills is spending time outdoors, and that’s as true today as it was in the 1950s. Boating on a lake is a classic Catskills activity and Loch Sheldrake is a picture-perfect place to do it. Loch Sheldrake Boat Rental has a variety of watercraft, from canoes to pedal boats to circular picnic boats complete with tables.