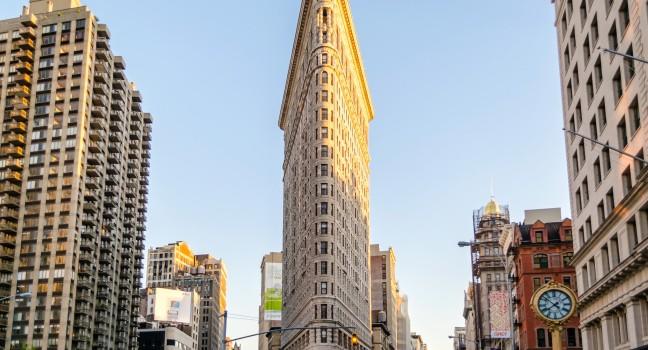 When completed in 1902, the oddly shaped Fuller Building, as it was originally known, caused a sensation. Architect Daniel Burnham made ingenious use of the triangular wedge of land at 23rd Street, 5th Avenue, and Broadway, employing a revolutionary steel frame that allowed for the building's 22-story, 286-foot height. Covered with a facade of limestone and white terra-cotta in the Italian Renaissance style, the building's shape resembled a clothing iron, hence its nickname. When it became apparent that the building generated strong winds, gawkers would loiter at 23rd Street hoping to catch sight of ladies' billowing skirts. Local traffic cops had to shoo away the male peepers—one purported origin of the phrase "23 skidoo." There is a small display of historic building and area photos in the lobby, but otherwise you have to settle for appreciating this building from the outside.

Book an Experience at New York City VIEW ALL