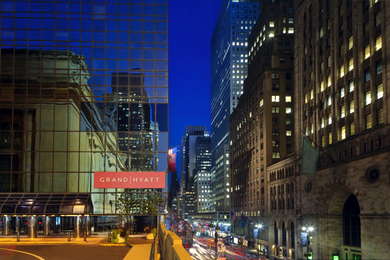 With some 1300 rooms, in the top 5 of largest hotels in New York City, the Grand Hyatt also lies on New York’s largest thoroughfare of 42nd Street. Nothing about megalith establishment that quite literally hovers over the sidewalk and Grand Central Station is dainty—after all, a certain real estate developer-turned-president overhauled the original 1919 structures in the 1980s giving it the shiny glass face lift that it stands today. But, the Hyatt went under a $130 million renovation in 2011, including public space and private residences by George Wong, and since has turned it into both a local and visitor destination.

The original building was a Federalist capital-H-shaped structure, lending to almost 140 room configurations. It’s difficult to call anything a “standard” around here—however, the hotel does have it standards. In amenities, comfort and space. Considering its own history and Hyatt’s penchant for grand design, the new Grand Hyatt feels quite different. Zen, luxe, fresh even, particularly against the chosen slate, stone and wheat colored interiors—all signatures of George Wong. Seamlessly integrated technology and storage into both working, relaxing and sleeping spaces accommodate modern traveling demands, even if basics such as in-room coffee or bottled water aren’t included. The rooms are decidedly sleek and chic. Quite the contrast to what the exterior would suggest!

Likewise for it’s unwieldy size, the space is quite clean. The wide-hallways are scuff free, and dusty bunnies aren’t trailing close behind. At the higher level of guest accommodations, this property offers much more personalized service, making the hotel a place for transients and long-term stays alike.

YOU SHOULD KNOW There’s an option for $100 extra a day for a “Grand Club room” that offers access to the private lounge where round-the-clock food and beverages are served. 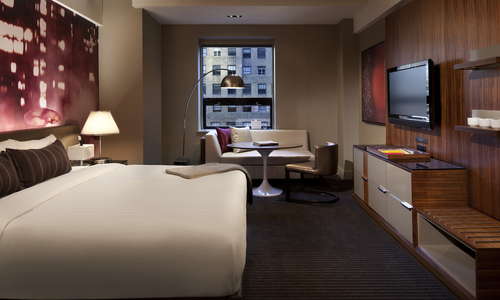 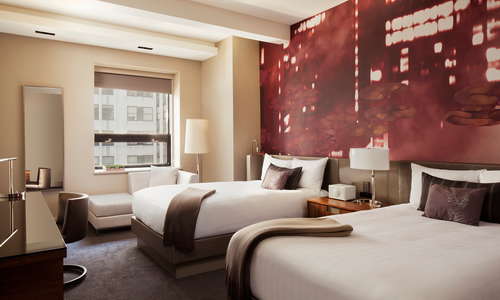 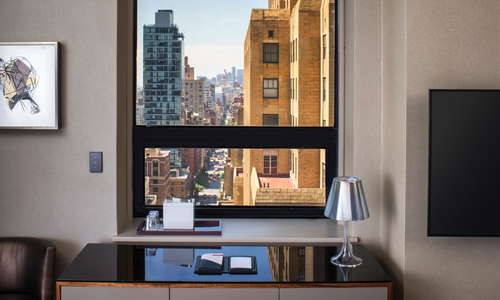 Sleek vanities in which everything finds its hidden place and tiled stone spa showers that rains water at a steady stream makes for quite the luxurious cleansing experience. 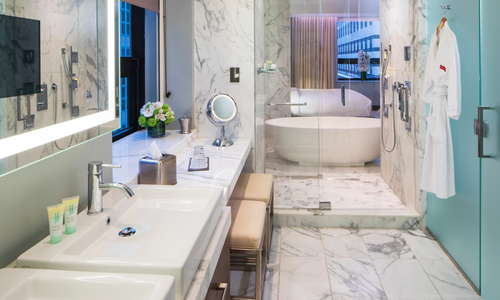 This lobby could compete with an airports with the speed and flow that handles high volumes. There are even stanchion-divided express lanes for check in, check out and concierge services. The lobby’s so large it can fit not one, but two 10-foot-plus Jaume Plensa 3D sculptures in the center. There’s even a full-service proprietary Market of grab n’ go fare (hot food and cold booze, too). Despite its grandeur, there’s nary a feeling of chaos. 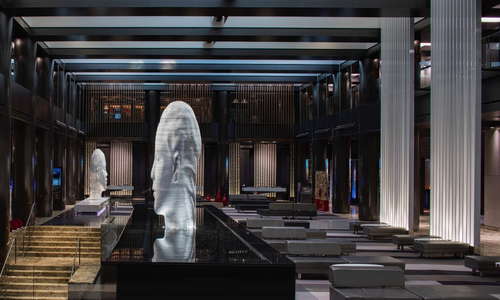 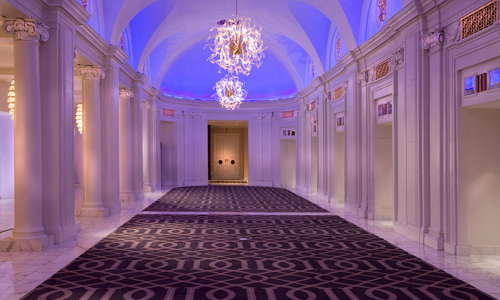 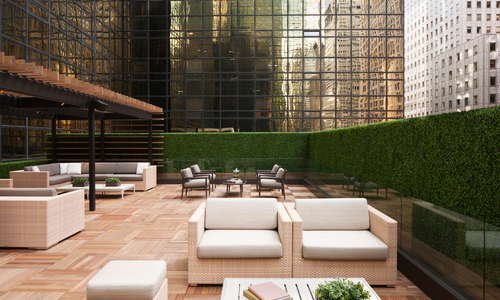 24-hours and spanning nearly the length of a city block, this fitness center is top of the line with the latest machines and plenty of accompanying weight training equipments.

New York Central is the hotel’s eating establishment in the extended pier over the 42nd street sidewalk. Vast with clean lines, New York Central runs the gamut of dining: barside, chef’s table or private group. The hotel does have three kitchens—to service 24-hour room service, the Grand Club to New York Central which cater to high volumes daily. Throughout the hotel’s menus, the fare is classic American—think Caesar Salad and hamburgers. 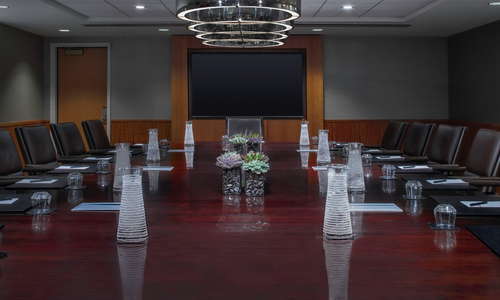 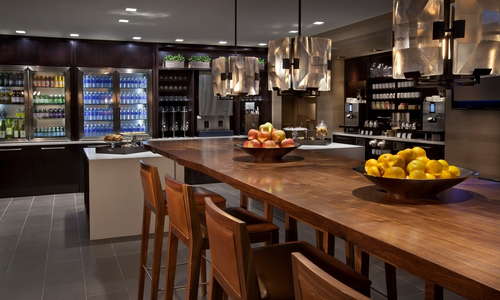 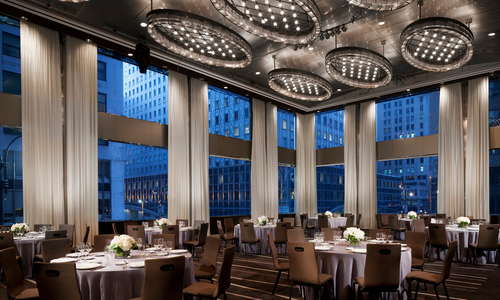 Known for its classic cocktails as much as its after-work quick beers, the Lounge is part cocktail den, part sports bar, an upscale one at least. The white leather and lacquer space stands is stark contrast to the buzzing headlights and traffic signs gleaming outside the all-glass room. Certainly a dramatic space for any out-of-town visitor. 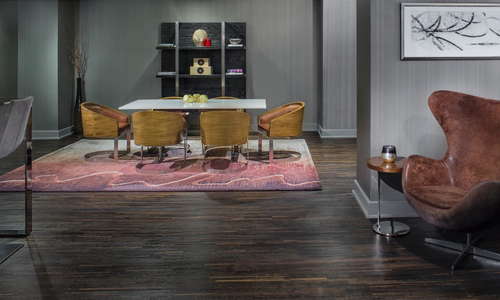 The hotel sits atop Grand Central, which has 4/5/6/7 subway lines and Metro North

Nestled in the lobby of the iconic Chrysler Building is the infamous Capital Grille (1-minute), which has somewhat of an obnoxious crowd but the food remains quality. Again, explore Grand Central, in particular Grand Central Market, Nordic Food Hall and the landmark Oyster Bar.

It's not hard to get a drink around 42nd street—but the safest bet is to stick to the Oyster Bar (1-minute) or Cock and Bull (4-minutes).

Sure it feels like a corporate-convention hotel, but the contrast between the over-the-top ‘80s exterior to the late-aughts contemporary zen keeps the Grand Hyatt real enough to be charming. For an operation to run as smoothly as the one does, it requires that stiff corporate starch. But here, it’s done with humanity. Even if there’s no free coffee (of course, there is an on-site coffee shop). 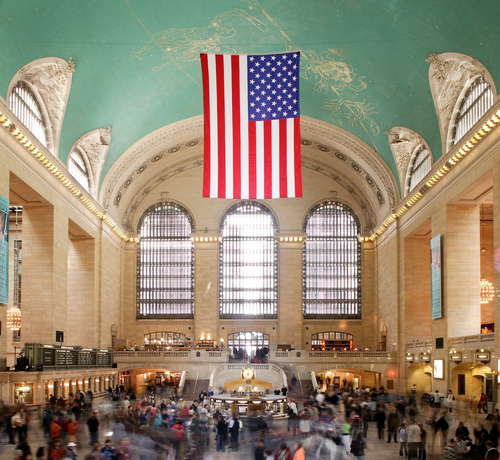 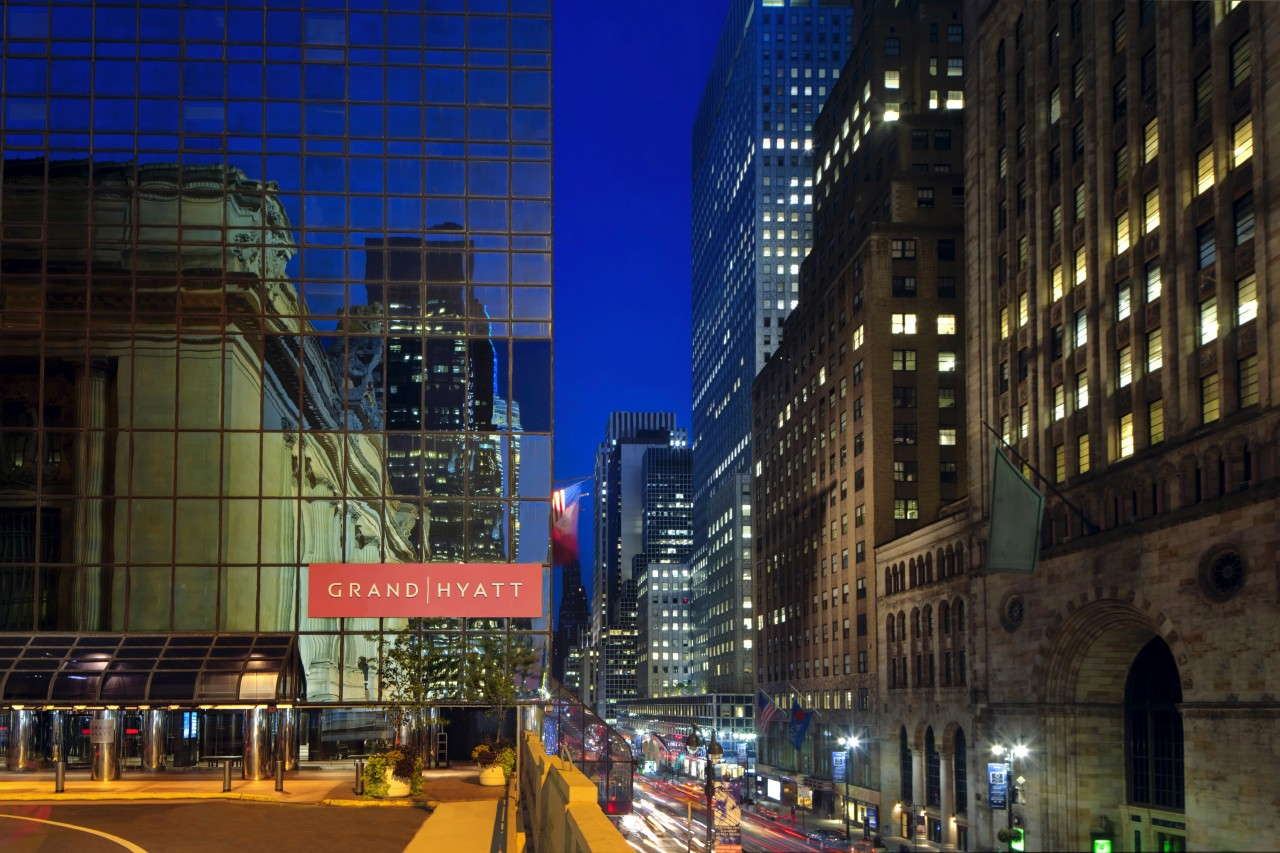 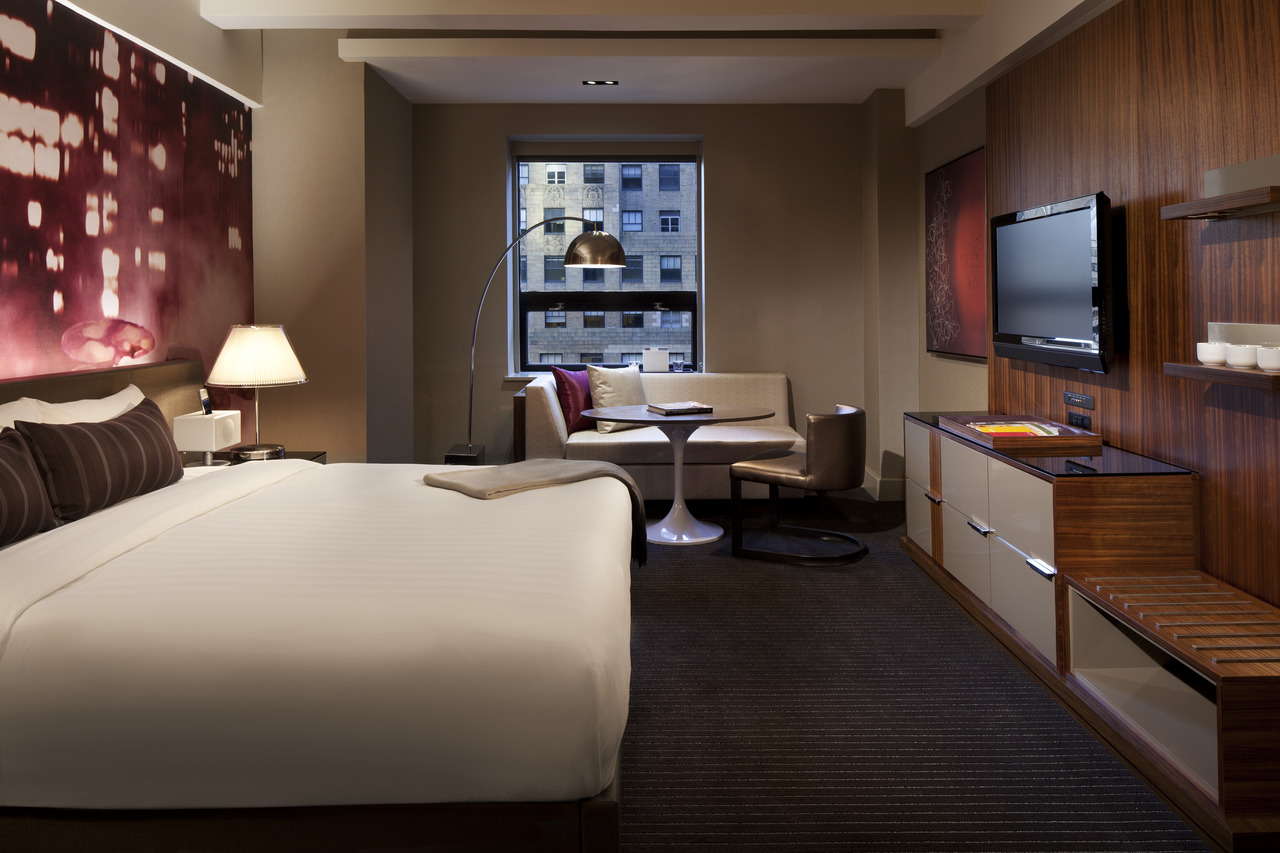 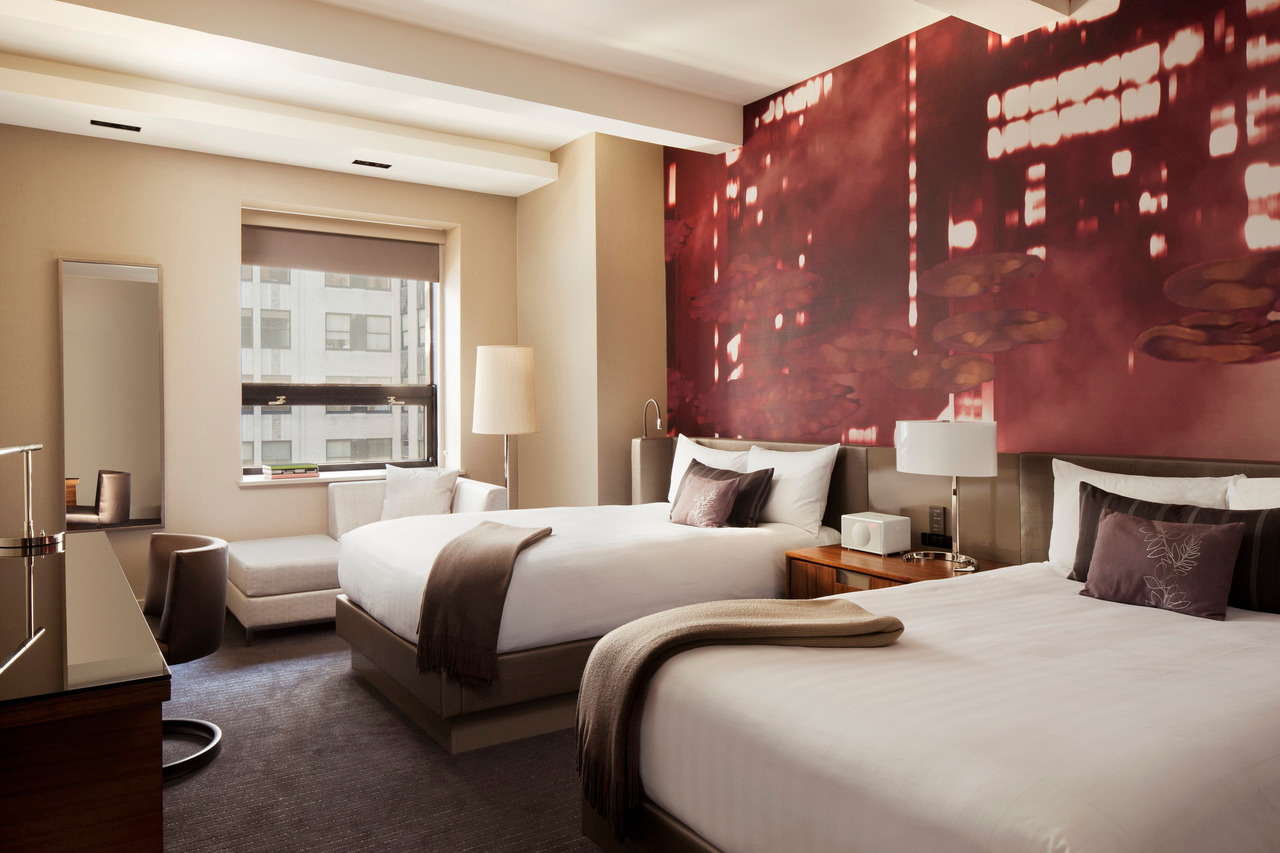 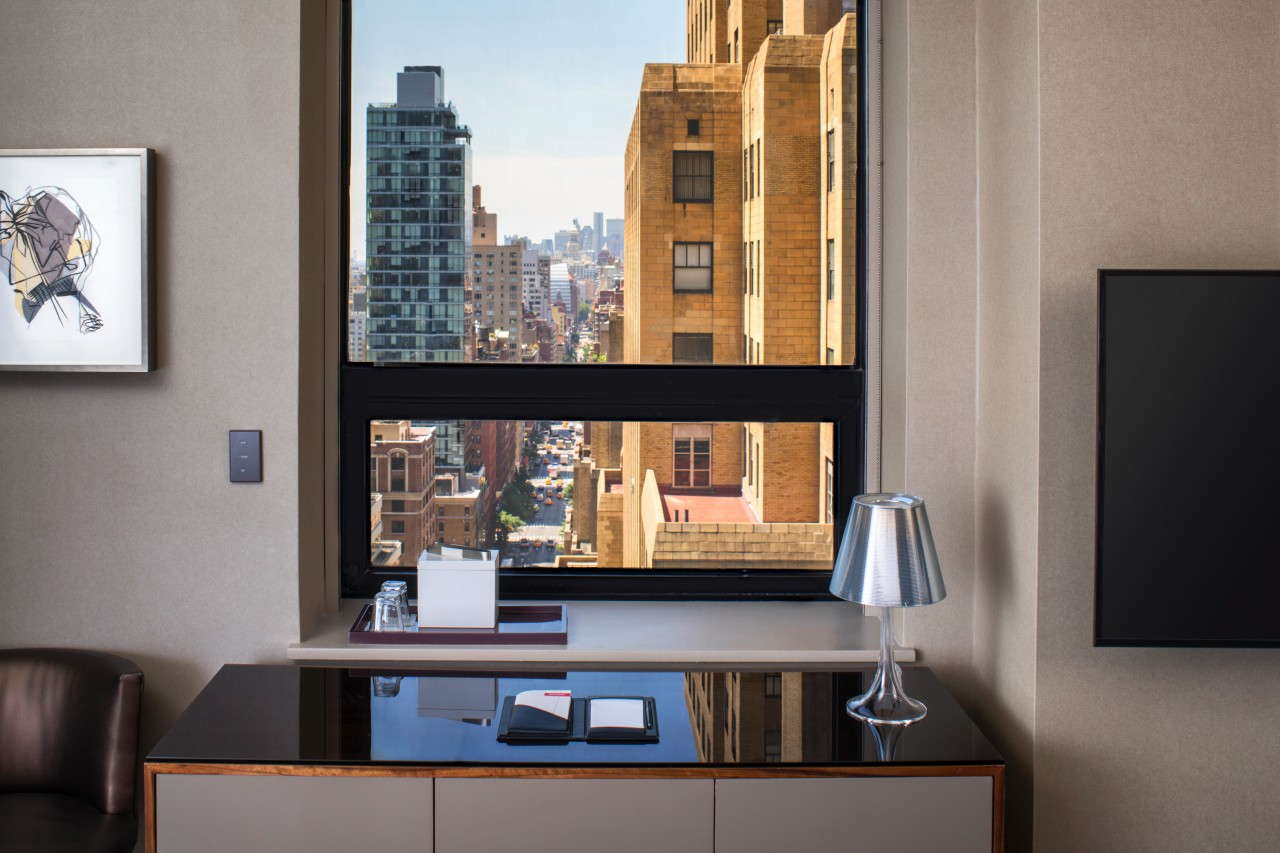 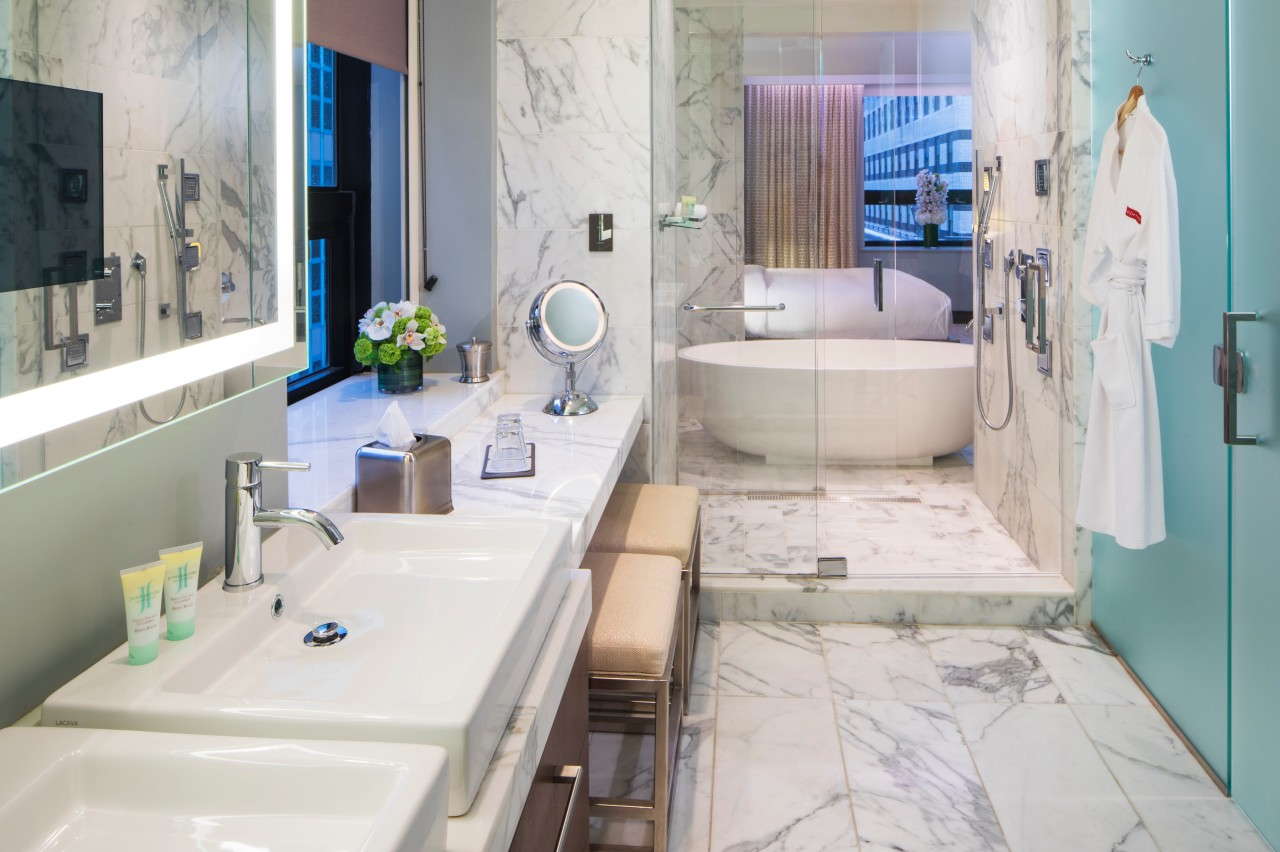 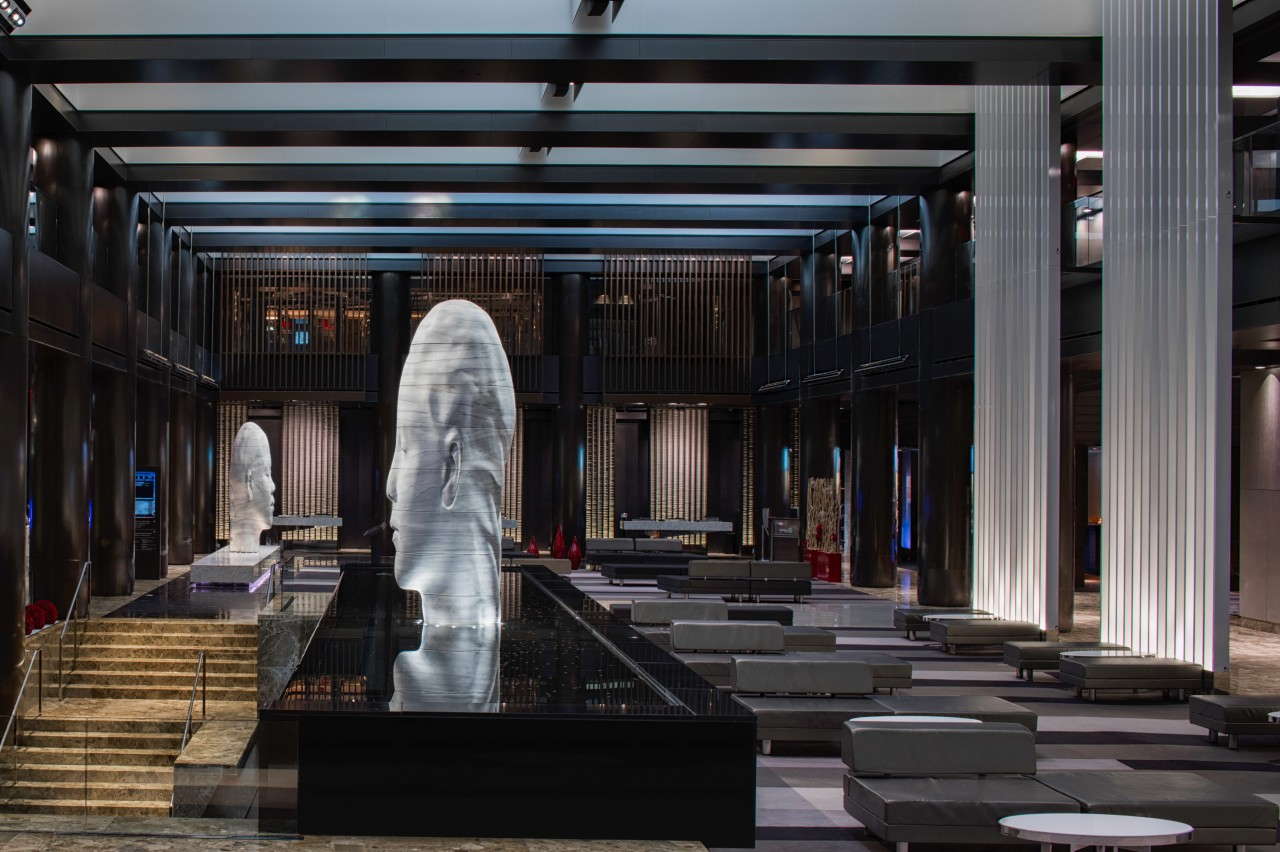 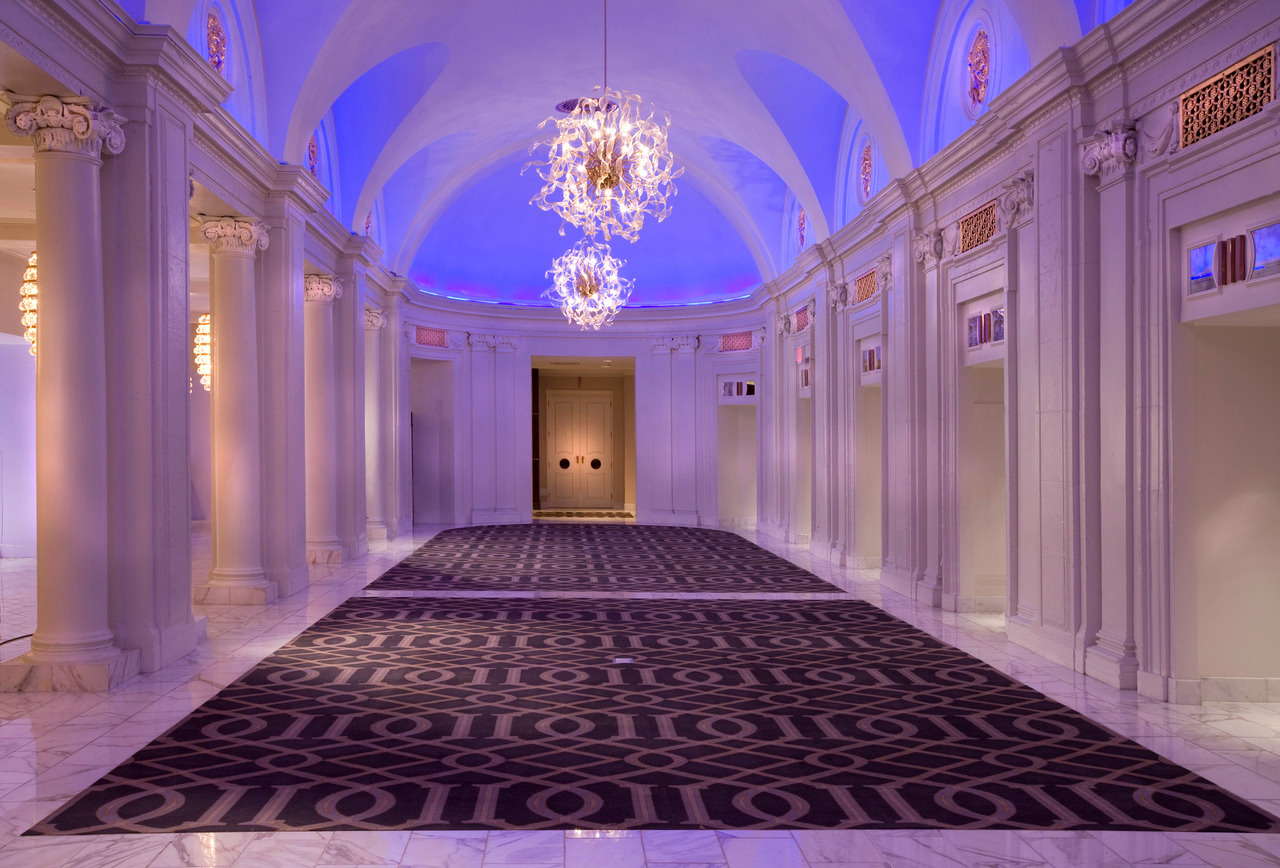 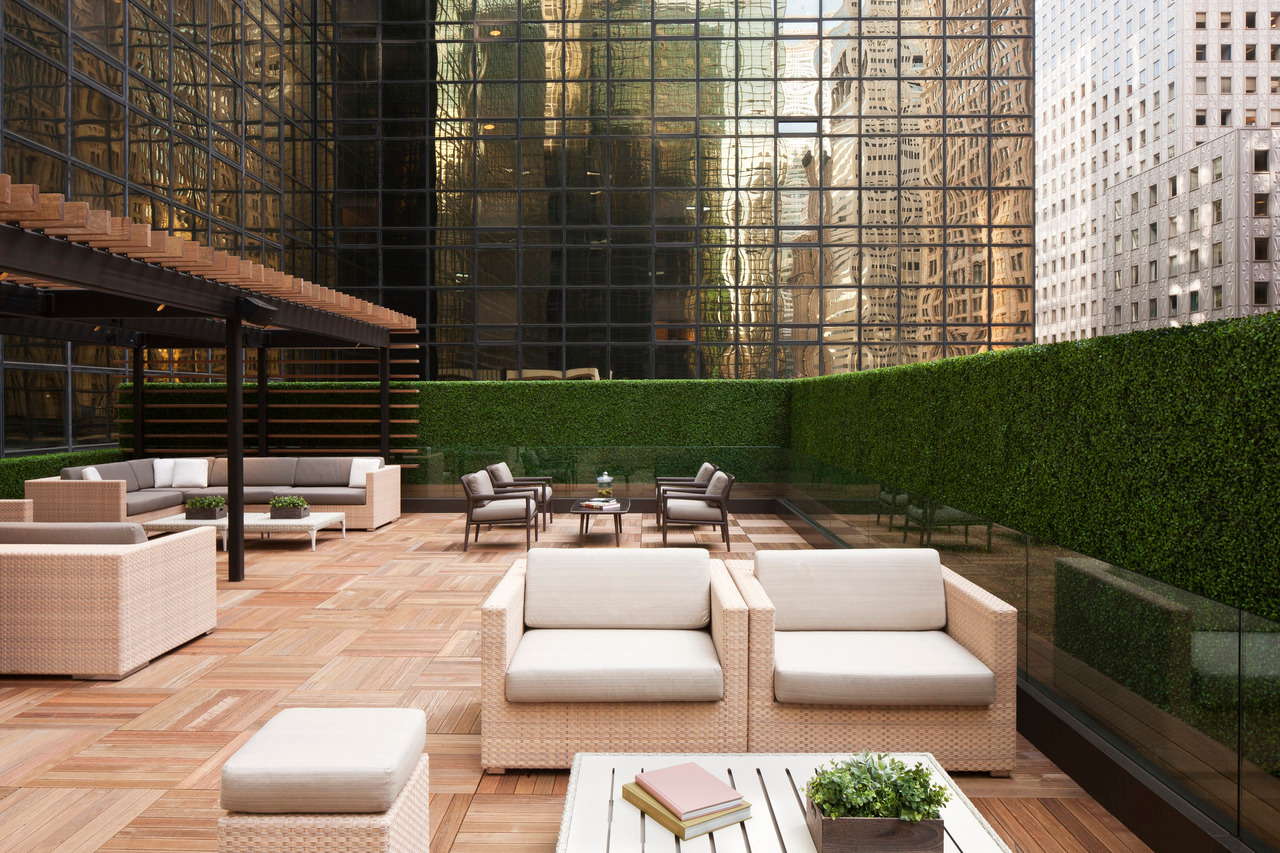 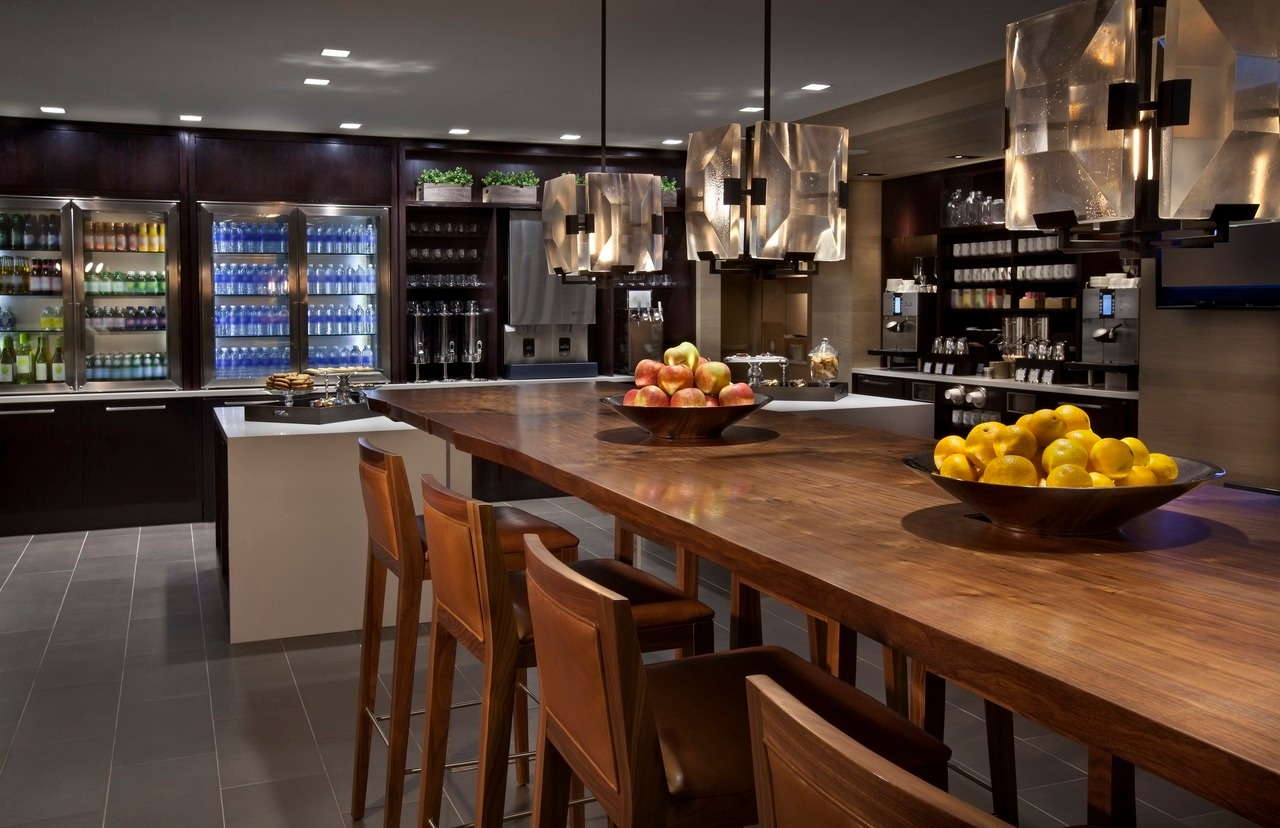 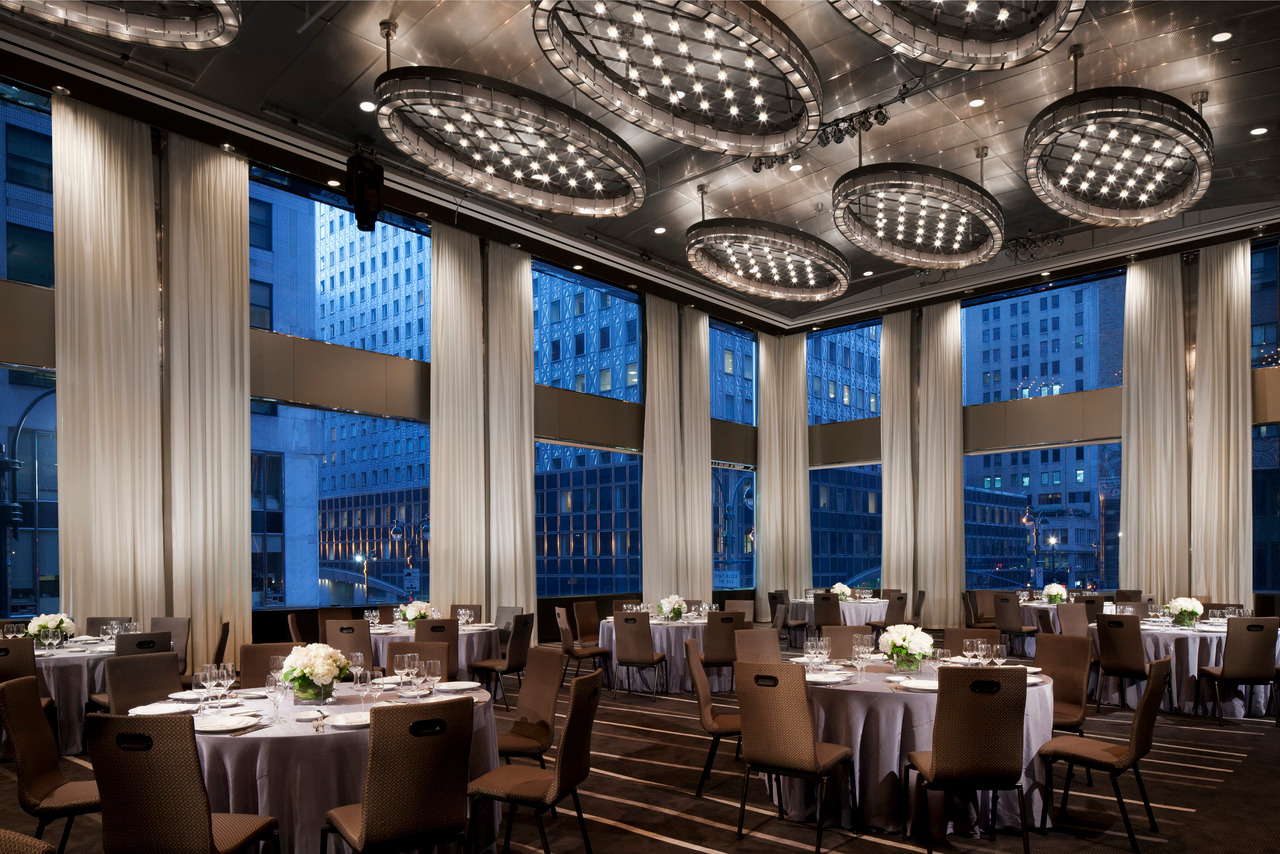 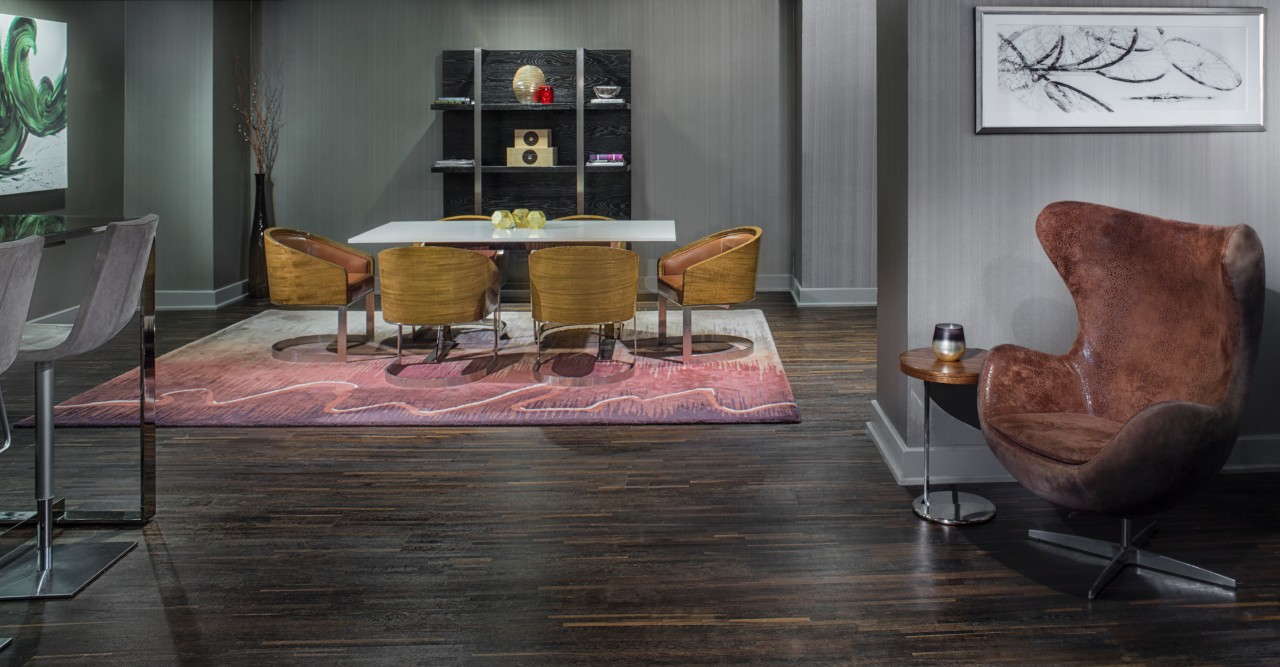