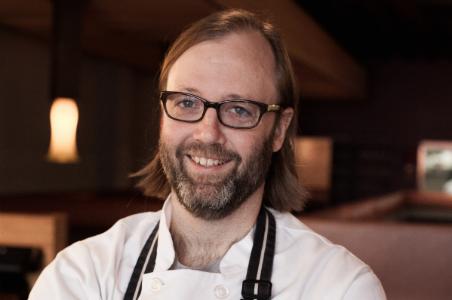 “I always try to make eating a part of wherever I am,” says chef Wylie Dufresne of his travel strategy. “If I could pick a new place to go, I would pick somewhere that I could try either restaurants or food I haven’t had before.” He does have his favorites: Mugaritz in San Sebastián and Astrance in Paris, among others. Serious foodies might also name Dufresne's New York City restaurant wd~50, a pioneer in modernist cuisine, which closes its doors at the end of November.

There are currently no plans to re-open wd~50, but should you miss your opportunity, you can always catch Dufresne at his more casual spot Alder. Or just turn on the television, where there’s a good chance you’ll see him between spots on Iron Chef, Top Chef, and Top Chef Masters. We spoke with the chef about restaurants to visit internationally, his love for San Sebastián, and what it's like to close a dining institution.

Your restaurant wd~50 is closing. Would you consider opening it up in a city other than New York?

I would love to see if there’s some way some iteration of it could come back some time in the future, but I don’t imagine that being in another city. I have long thought that wd~50 would be great in London, but that is something that I gave up on a long time ago. This was before Alder, at a time when I thought London was really trying to ramp up its level of dining, which it has since done.

Where do you recommend eating in London?

Off the top of my head I’d say any of Fergus Henderson’s places: St. John, St. John Bread and Wine, also The Ledbury, Dinner by Heston Blumenthal. All of these places are tons of fun and worth going to for actual British food. There’s some great Indian food and some amazing Japanese, but I say if you’re going to London, you should go for what those guys are up to.

Say I want to do a global tour of modernist cuisine. What restaurants should I visit?

Well you have Albert Adrià, and all of his restaurants in Spain, primarily in Barcelona. You go to Tickets and 41º. If you hurry, you’ve got until November 30th to come here to wd~50. Alinea, I guess. Moto maybe, in Chicago. You know, the funny thing about modernism is that basically the places I just rattled off were sort of first-level modernists, and now there’s so much of modernism that has found its way into other menus. So, this isn’t really answering the question, but I’m proud of the fact that it has made inroads rather than, “These are the four or five places that you must go if you want to see it.” You should go see what they guys at Mugaritz in Spain are doing. You should go see what Alex Atala is doing in Brazil. You should go see what René Redzepi is doing at Noma. This is going to be an expensive trip.

What’s the most memorable meal you've had while traveling?

I would say my meal with my wife at El Bulli was a wonderful experience that ranks up there, but I would also say one of the most impressionable dining experiences I’ve ever had was at two in the morning in Sakai, Osaka, at a restaurant that only served chicken—in the middle of a fish market. We had nowhere to eat and our guide said, “I found this place that just serves chicken. You guys wanna go eat some chicken?” We get there and it’s tiny. And they start serving us chicken in all sorts of different forms and it was incredible. And it was there that I had one of the weirdest things I’ve ever eaten, which was raw chicken testicles. Not something maybe that you think you should eat, unless you’re super hungry. I put it in my mouth and it was delicious.

How about memorable street food?

Probably the most exciting street food I’ve had was in Singapore. The hawker stands of Singapore I think are not to be missed, if you have that opportunity. I’m not sure I’m down with some of that funky skate that they do, but there’s a lot of good stuff on sticks and skewered food that’s great.

You are a frequent visitor to San Sebastián. What do you love so much about it?

San Sebastián is one of my all-time favorite cities. I’ve been there 9 or 10 times in the past 12 years. It’s a coastal town—and I’m not really a water guy, but it’s such a cool coast. I don’t enjoy sitting on the beach, really, but it’s very pretty on the water, and it immediately goes up into these rolling hills. It also gets really cold in the winter, which I like. It’s got great food; at one point, it had the most Michelin stars per capita. The region has so many fine-dining restaurants, but also some amazing pintxos and local places that are great.

What are your favorite hotels in San SebastiÁn?

I like the Londres y de Inglaterra. It's is a bit older and bit fun and kind of funky, with a nice vibe I think. It’s in a good spot on the boardwalk which is good for first-timers. If you're looking for views, the Monte Igueldo, at the high point of the city, is spectacular. It's just a bit out of the way and kind of a pain in the ass: you can’t just walk out of your hotel and grab a bite to eat. The Maria Cristina is probably my favorite place to stay. With the Marina Cristina and the Londres you can do the pinxtos tour and have a little too much red wine and stumble back to your room, but with the Monte Igueldo you’ll need a cab.

What are some can't-miss restaurants there?

You should eat at Mugaritz, you should eat at Arzak, you should eat at Portuetxe. It’s a 400-year-old restaurant! And you actually have to drive down to it because in 400 years the ground has been built up many times, so it’s lower than everything around it because the world has literally grown up around it. It’s amazing to me to eat in a restaurant—and it's simple food, you’ve gotta get the baby squid with onions, the langoustine, the steak—and realize that it's older than your country. You’ve gotta go to Elkano for turbot—they do it on the wood grills out front. It’s a special place.

How about for more casual dining?

You go to the old part of town to do the pintxos crawl. And then you go to the sidrerias, the cider houses, with enormous casks of cider. The Basque areas are just ripe with apples, so in the harvest time they make cider. You go there and line up and they open up a spigot on the top of these barrels that are like 12 feet high, and you put your glass underneath a stream and you fill your glass and keep walking. They also have great cod omelettes; the fortune of the Basque is made of cod.

What country's food scene would you say is underrated?

I would say America! We have maybe not contributed as much to the food scene as a lot of other countries have, by volume, but think of barbeque, think of the diner; those are things that don’t really exist in other countries, and I think are incredible, valuable contributions to the culinary landscape. I don’t know if we’re just too big, and too spread out, but it’s a great time to be eating in America.