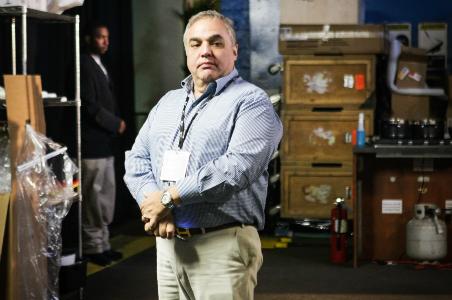 Lee Schrager has a pretty enviable job. The Vice President of Corporate Communications and National Events at Southern Wine & Spirits of America, Inc., he’s also the architect of the Food Network New York City Wine & Food Festival (October 16–19) and it’s smaller, sunnier sibling in South Beach, which means he spends much of his time traveling and eating. He estimates he brings his Culinary Institute of America–trained palate to over 300 restaurants a year, many of which recently served as research research for his book Fried & True: More than 50 Recipes for America's Best Fried Chicken and Sides.

You can catch the fruits of his labor in New York this week, and also at the Food Network & Cooking Channel South Beach Wine & Food Festival (February 19–22; tickets go on sale Monday, October 20). But first, read on to discover where to eat in Miami and Tuscany, the strangest street food Schrager ever saw, and where to stay in a hotel that looks like a palace.

Let’s talk about fried chicken, since you’re now an expert. Where is the most amazing fried chicken in New York City?

I love Charles Gabriel up in Harlem at Charles’ Country Pan Fried Chicken (2839-2841 Frederick Douglass Blvd., 212/281-1800). He does it pan-fried on the stovetop and I think it’s really fantastic. Also in Harlem, Marcus Samuelsson’s at Red Rooster is one of my favorites, and I love Andrew Carmellini’s at The Dutch.

What about your favorite place for fried chicken in the world?

Every country does a fried chicken, I have to say. Yotam Ottolenghi from London has a great schnitzel—that's in the book. I love the schnitzel, so I'll say Ottolenghi in London.

How does the South Beach Festival compare to the one in New York?

The quality and focus is the same; obviously you'll see a lot of the same personalities, because that's who people want to see, with both television stars and Michelin-winning, white-tablecloth stars. In New York, everyone lives here and it's easy to get to, and it's a nice time of year, so we have double the amount of events in New York than in South Beach. But if you want to be somewhere where it's 80 degrees in the dead of winter, come to South Beach. And if you want to be in New York City during one of the last pretty times of the year, come to New York.

What food festivals are must-visit, besides your own?

I certainly think the Food & Wine Classic in Aspen is the granddaddy and kind of started everything. I would certainly go there. I have not been to Charleston Wine + Food, but they always have a good lineup. I've heard Newport is a great one. But also, everyone's doing a food festival today. There's one in Westchester county, there's one in Greenwich, Connecticut. They're popping up all over. I don’t think there's ever a week where I don’t hear about a new wine and food festival.

What do you think makes a good food festival? And what strategy would you recommend for a first-timer?

I think venues and locations are important to showcase the city that they're in. The talent, the right sponsors doing great activations, and I think building the right events around the right people is really important. And timing. For first-timers, I would say do not overwhelm yourself. Take everything in moderation. Wear comfortable shoes and comfortable clothing. And don't overdo it.

What are some must-visit restaurants in Miami?

A tried and true would be Joe's Stone Crab, a classic. I love Versailles for Cuban food, Hy-Vong for great Vietnamese food. In the sense of new, I love Zuma. I love Michael's Genuine.

There are 120 events at this year’s NYC Wine and Food Festival. Which ones in particular are you excited for?

Look at the dinners that we have: Alain Ducasse doing a bistro dinner, and Ottolenghi doing a Mediterranean dinner, Gregory Marchand from Frenchie is coming in and doing a dinner, and Enrique Olvera from Mexico. I have to say the dinners are world-class, Michelin-rated dinners. And I have to say there's one on Saturday night called Mediterranean Exploration with Michael Solomonov, Einat Admony and Sara Kramer. That's the one that I'm going to. It's my partner's birthday and that's the dinner that I picked.

There's also a “Hot Dog Happy Hour” with Mo Rocca. Do you have a particular affinity for street food?

It's fun because Mo Rocca is such a character. It's New York so we've done burgers, we've done tacos, we've done pizza, we've done sushi. So the next quintessential is hot dogs. I'm a big fan of street food, I think that's how you get to know a city.

What’s the best and most unusual street food you’ve eaten?

We went to Thailand last year, in Chiang Mai, which had some great, late-night food markets. One of the cleanest places I've ever been to and certainly the most beautiful. I'm not an adventurous eater; I don't eat what I don't like. So I can't tell you the freakiest thing I’ve eaten, I just wouldn't have eaten it. The most unusual thing I've seen was spinal cord, like the cow's spinal cord, when we were just in Israel at a market.

What do you look for in a hotel when traveling?

Given a choice, I'd rather stay in a small boutique hotel than a large chain hotel. I love Aman hotels. I love One & Only. I have to say the Mandarin Oriental in Chiang Mai was pretty fabulous. It's built to look like an old city, with lots of restaurants and a spa. I love a massage, so if a hotel has a great spa, it's even better.

You travel a lot to Tuscany. Where do you like to stay?

We have great friends that lend us their home in Tuscany in the summertime. We also go to one of my favorite resorts in the world, Il Pellicano, in Porto Ercole. It's on the water. I love to swim, I love being outside. And they have an exceptional restaurant there. Their casual family restaurant is better than most formal restaurants.

How should a newbie approach the food scene in Tuscany?

I would get in a car and try every winery, and try to find a new lunch and dinner spot every day. We get in a car and go to a winery, we get lost for about an hour or two in the back roads, we take a nap and go out for dinner and then start all over.

Where are some places in Tuscany you can recommend for food?