A lot of people crave the enjoyment of a good comedy show while exploring NYC. However, it can be extremely overwhelming to decide where to go! With so many options available and tons of barkers lining the streets trying to pull in your business, how is one supposed to decide? This list of the must-see destinations for busting your guts with laughter has something for everyone—even kids! 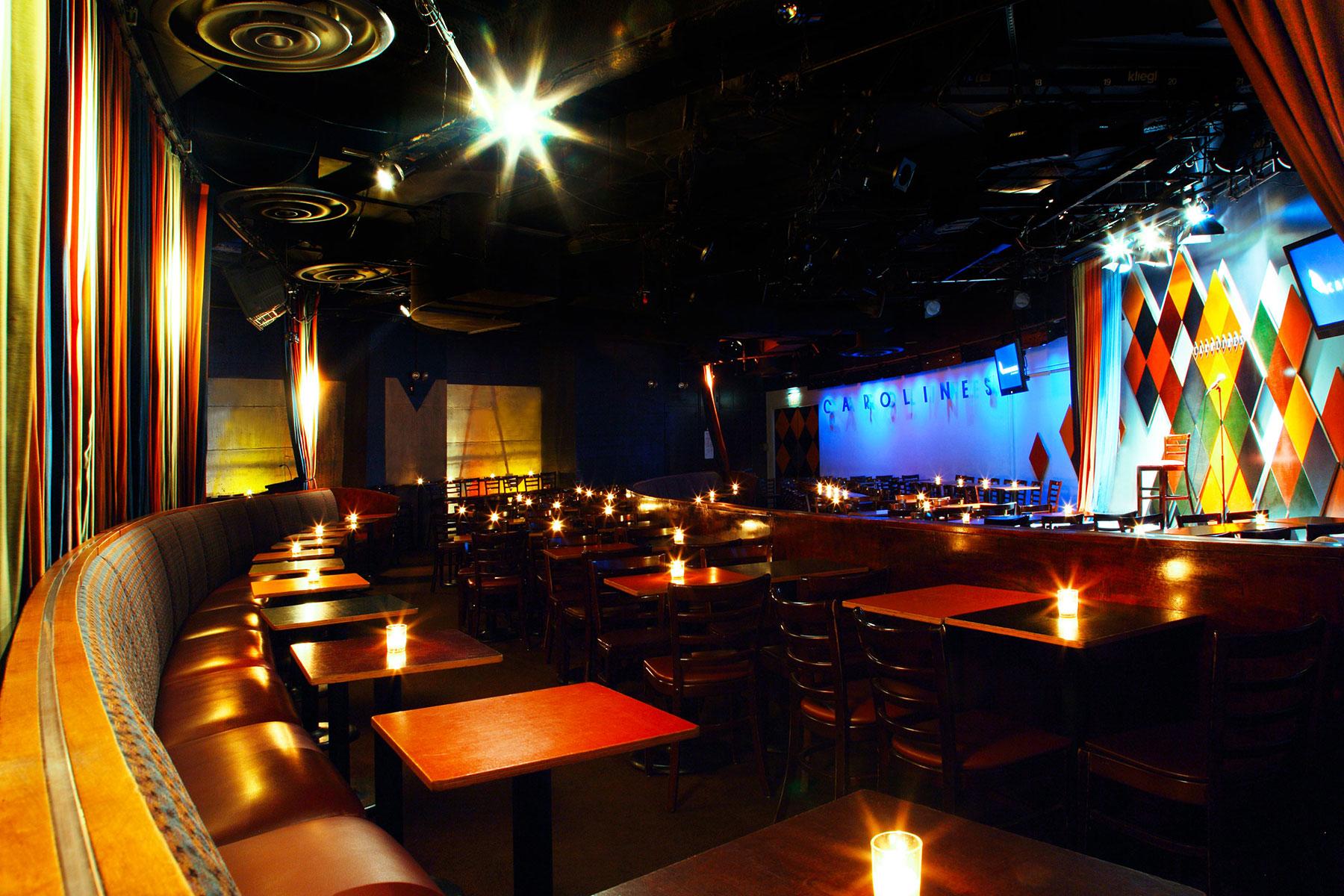 PHOTO: Courtesy of Caroline's
1 OF 9

It’s impossible to talk about the NYC Comedy Scene without first talking about the legendary Caroline’s on Broadway. Located in the heart of the Theatre District in Times Square, this historical landmark has hosted some of the best and the brightest comedians. Everyone from Billy Crystal to Michelle Wolf has performed at this illustrious comedy hot spot that’s been turning out high-quality entertainment for over 30 years. Comedy fans should not miss a trip to what many consider the premier comedy club in America. With programming seven nights a week and 365 days a year, you can be sure to catch an amazing show and a good meal any night. And everyone should swing by the club on the first Monday of every month for REVIVAL SHOW, a show where comedians tell stories and sing songs from their musical theatre pasts. This performance perfectly marries the club’s comedy core with the glamour of its Broadway neighbors. 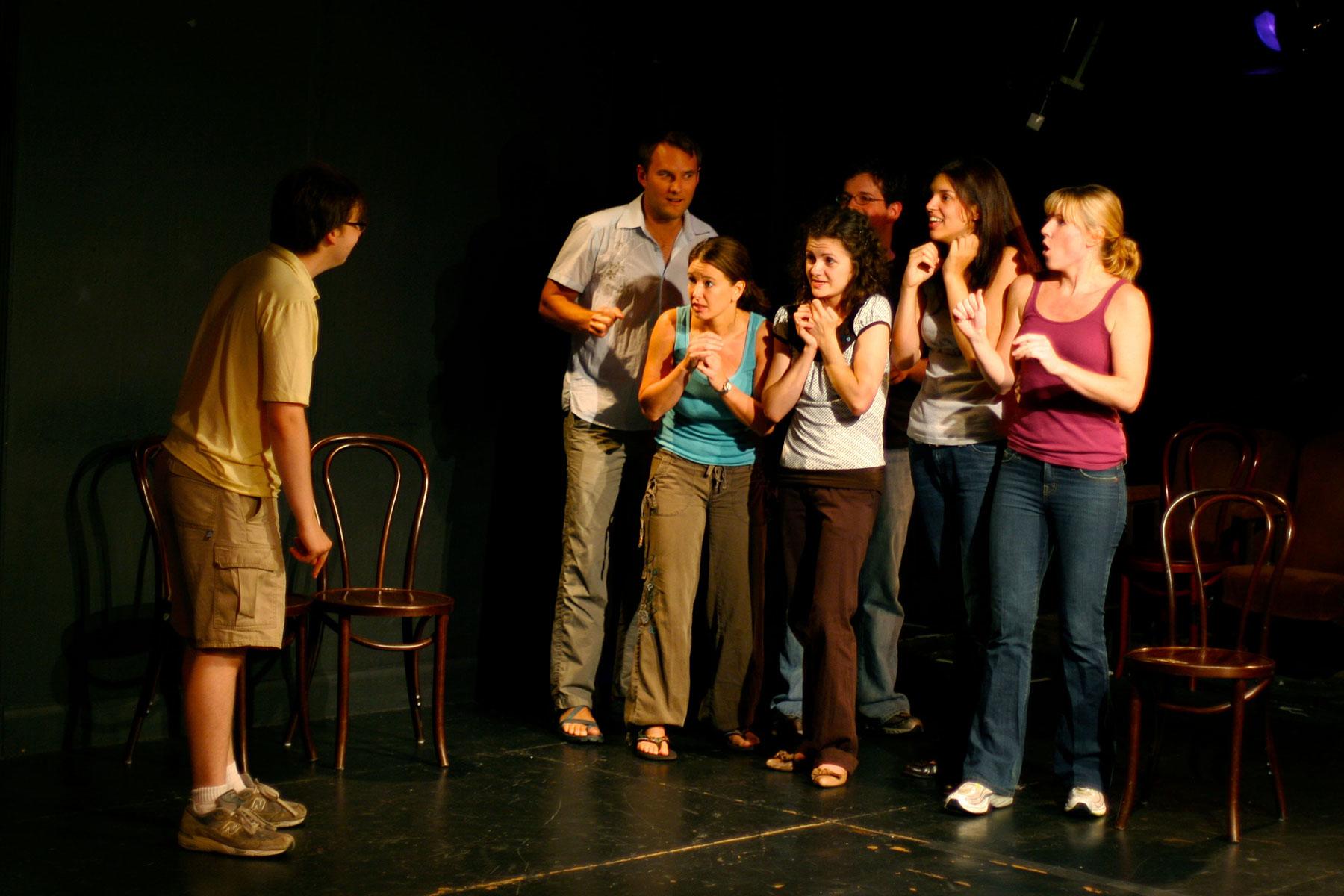 When comedians Matt Besser, Amy Poehler, Ian Roberts, and Matt Walsh came to NYC from Chicago in 1996 performing under the name The Upright Citizen’s Brigade, the group noticed there wasn’t much long form “Chicago style” improv happening in the Big Apple. In 1997, they founded a training program which quickly blossomed into a theatre that opened in Chelsea in 1999 and now has evolved into four theatres (two in NYC and two in Los Angeles) that consistently showcase the brightest comedic performers around. UCB Hell’s Kitchen location is the newest of their theatres and home to their flagship shows ASSSSCAT3000, Harold Night, and Maude Night. UCB is an all-ages venue, so it’s a great place to bring those teens and tweens in your life who don’t want to be left out of all the fun.

In 2011, the East Village location was opened and plays to host to shows seven days a week, including Queerball, a monthly LGBTQIA-themed variety show that invites performers and their allies to perform in a safe space and push their boundaries. UCB is an incubator for talent and encourages its performers to be innovative. Like it’s sister theatre in Hell’s Kitchen, the schedule has everything from improv to stand-up to character shows and jams. With a kick-ass bar staffed by some of the most fun bartenders around, you can’t lose with cheap tickets that yield big laughs in a neighborhood where you can literally never get bored. 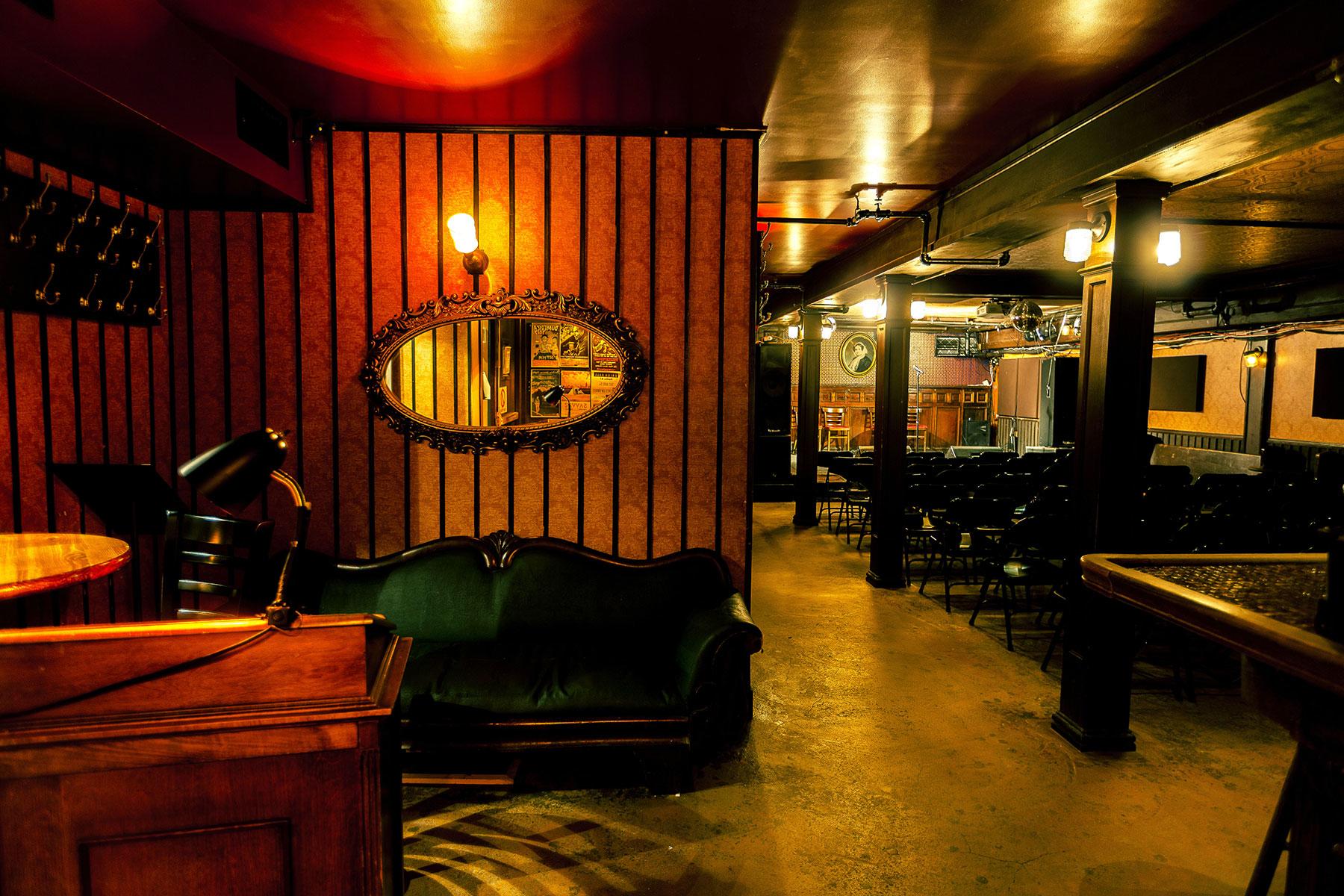 This cozy multipurpose venue not only showcases some of NY’s best upcoming comics, but two bocce courts! From original comedic musicals to sketch shows to performances from industry heavy hitters like David Cross, the eclectic programming at Union Hall offers a wide variety of experiences in a laid-back atmosphere where, not for nothing, I once saw a stand-up comic propose to his girlfriend after spilling a beer. The tickets are cheap and the drinks pour until 4 am every night. 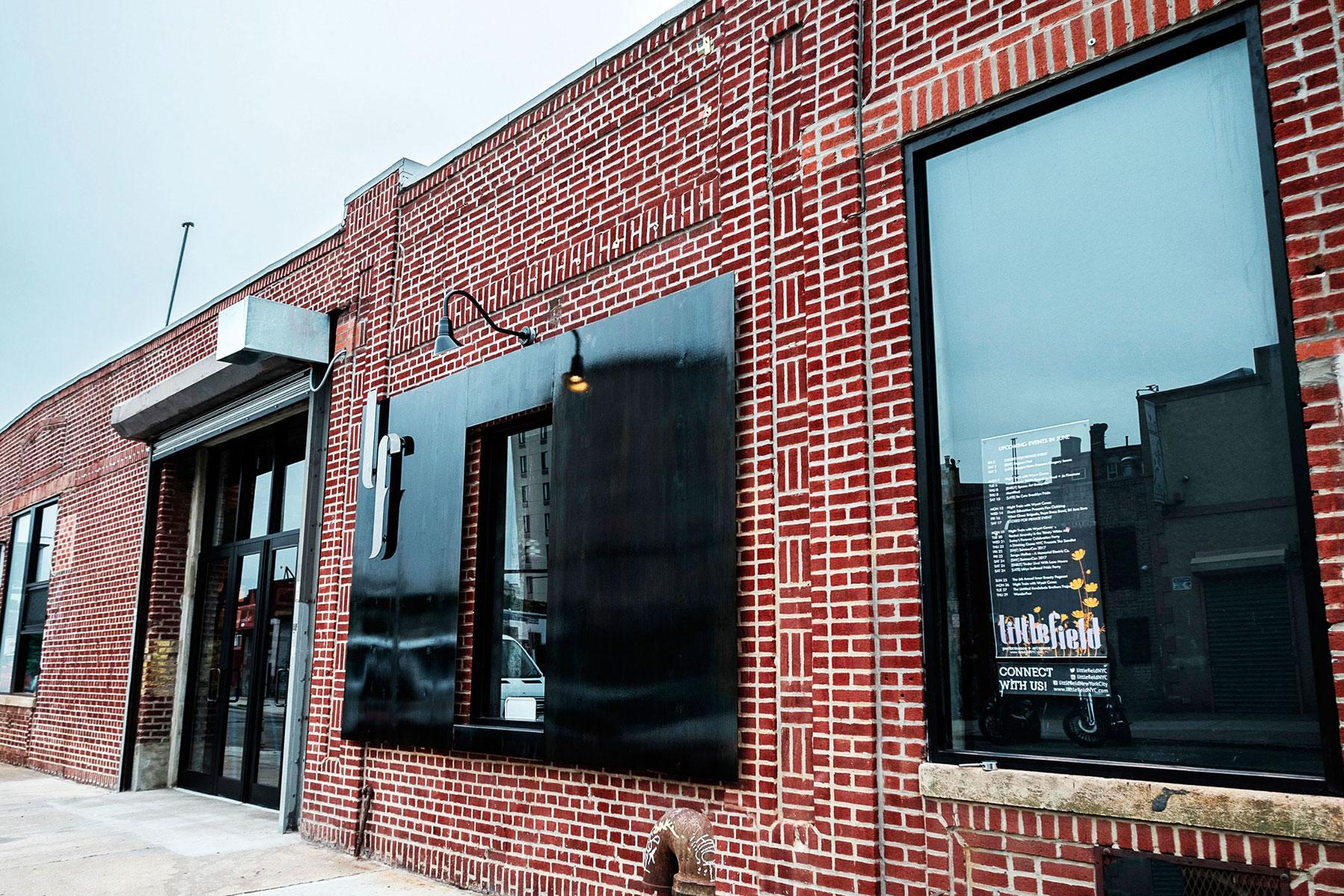 One of NYC’s premier venues for indie entertainment, Littlefield is a favorite among comics to experiment with new material and crazy ideas. Audiences looking for entertainment that surprises and defies will enjoy this eco-friendly former textile-workshop-turned-performance-venue. This is a favorite spot of upcoming alt-comics like Jo Firestone and her weekly show, Boy Butter as well as events like Punderdome and recently, the Unemployed Show: LIVE! This Gowanus gem is situated right by Kick Axe, a not to be missed spot where people can toss an axe for pleasure, it makes Littlefield an ideal spot for people looking for some non-traditional fun. Located right off the R train at Union Street and a very reasonable distance from Atlantic Terminal, this club may be off the beaten path, but it’s super accessible. 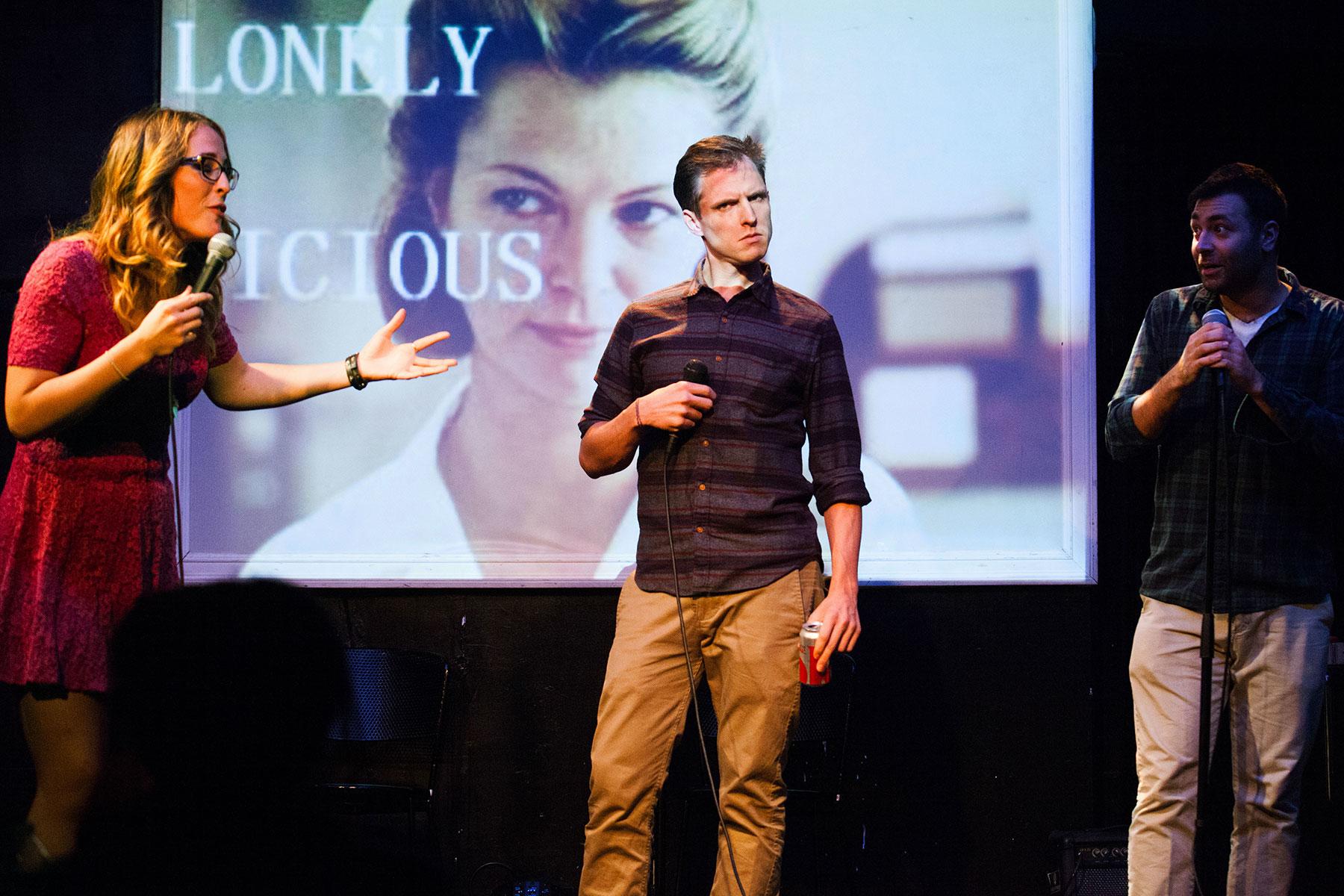 The Creek and the Cave

Once a dive bar the Creek and the Cave has established itself as a pillar of the NY comedy scene. With easy access from Manhattan, thanks to the 7 train, this laid-back comedy club, bar, and restaurant has two stages and offers cheap margaritas to go with big laughs. Open seven days a week and offering over a 150 shows a month on their two stages, you can take a swig of a delicious cheap, margarita while chowing down on tacos while you bust a gut listening to stand up, improv, and a wide variety of comedic endeavors. This is the kind of spot where industry legends like Colin Quinn swing by when they need to work stuff out. Need a break from all the laughs? This California-style eatery with a laid-back bar vibe is also home to several pinball machines to entertain and delight. This is a safe space for comedians to take big chances and for audiences to say, “I saw them before they were famous!” 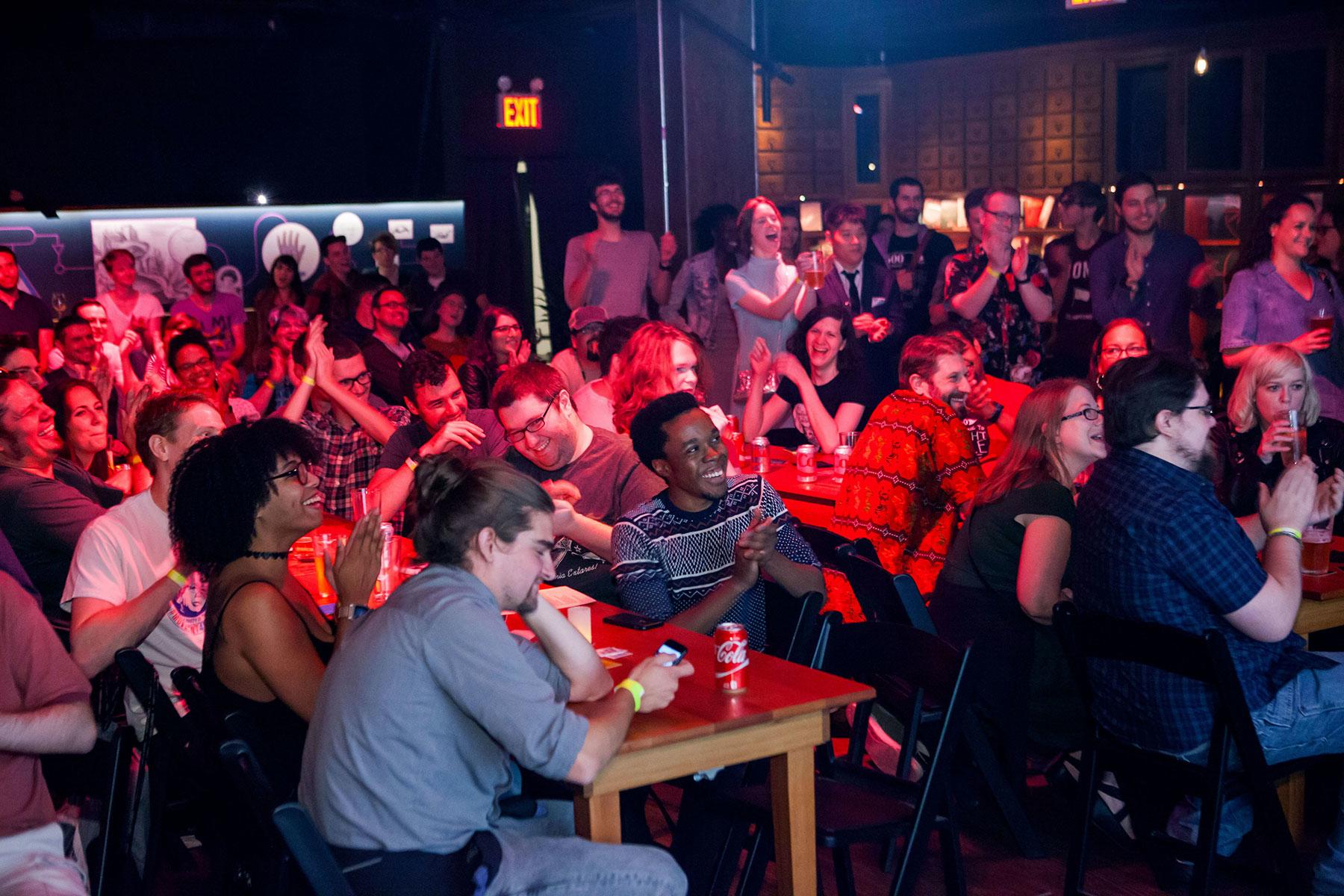 Located in the LES this new venue offers a “speakeasy stage for playful, intelligent nightlife” and promises to send their audiences home a little smarter, and probably, a little tipsy, too! They describe themselves as having the ambiance of the Harvard Club meets CBGB.With a bar that boasts 10 craft beers on tap and a variety of other top-notch drinks and noshes, this is the perfect place to take a date. They’ve got all sorts of shows from musical comedy improv from the hip-hop supergroup North Coast to open mics to trivia night’s lead by some of NYC’s best comics. 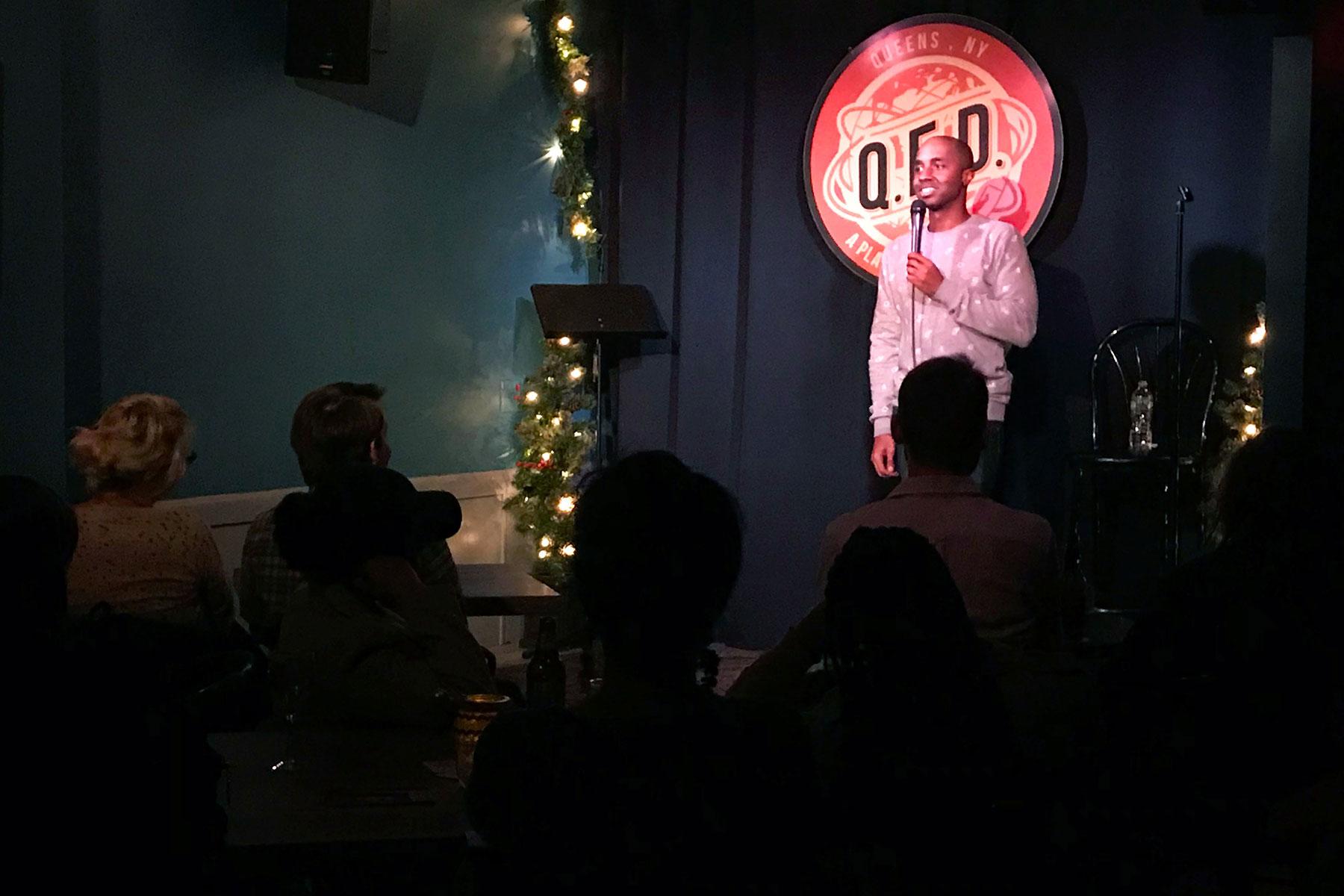 A lot of people are still sleeping on the beauty of Queens. Tucked away in Astoria, Q.E.D. likes to consider itself an “after-school program for adults.” It’s all the things you loved about childhood paired with adult beverages! During the day you can swing by for a rehearsal, co-working space, or even to record a podcast. But at night? They’ve got all sort of programming going on! Everything from stand-up to sketch to storytelling and more is welcomed on stage at this hip, off-the-beaten-path Astoria venue that offers delicious treats to go along with its extensive beer and wine list. An easy walk from the N and W subway, this is a great place to catch entertainment before hitting up one of the neighborhoods amazing restaurants. 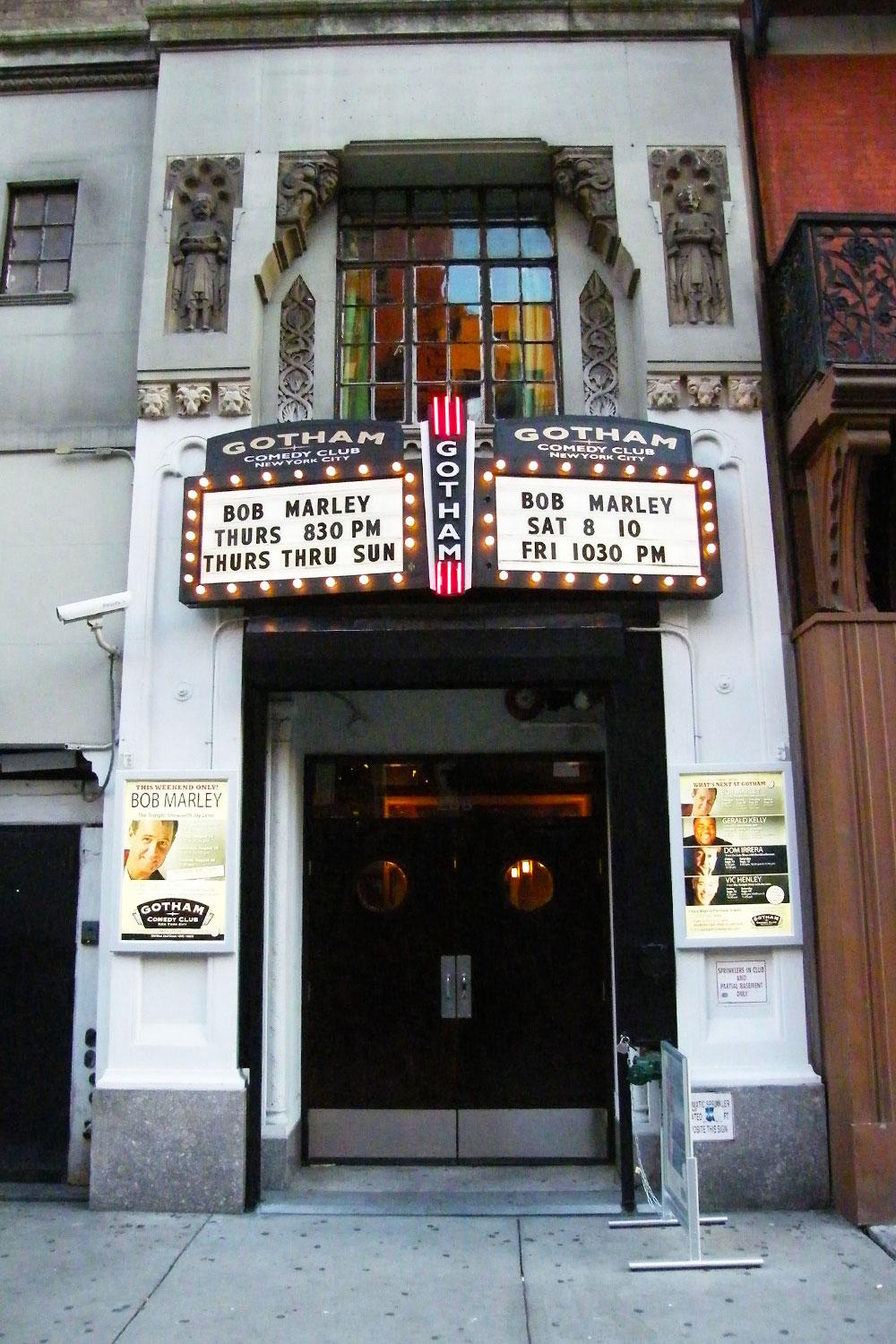 Larry David, Jerry Seinfeld, Dave Chappelle: these are just some of the incredible powerhouse comedians that have graced the Gotham stage. If you’re looking for a classic stand up comedy experience this is a surefire bet. Since 1996, this Chelsea establishment has been bringing down the house and launching careers. 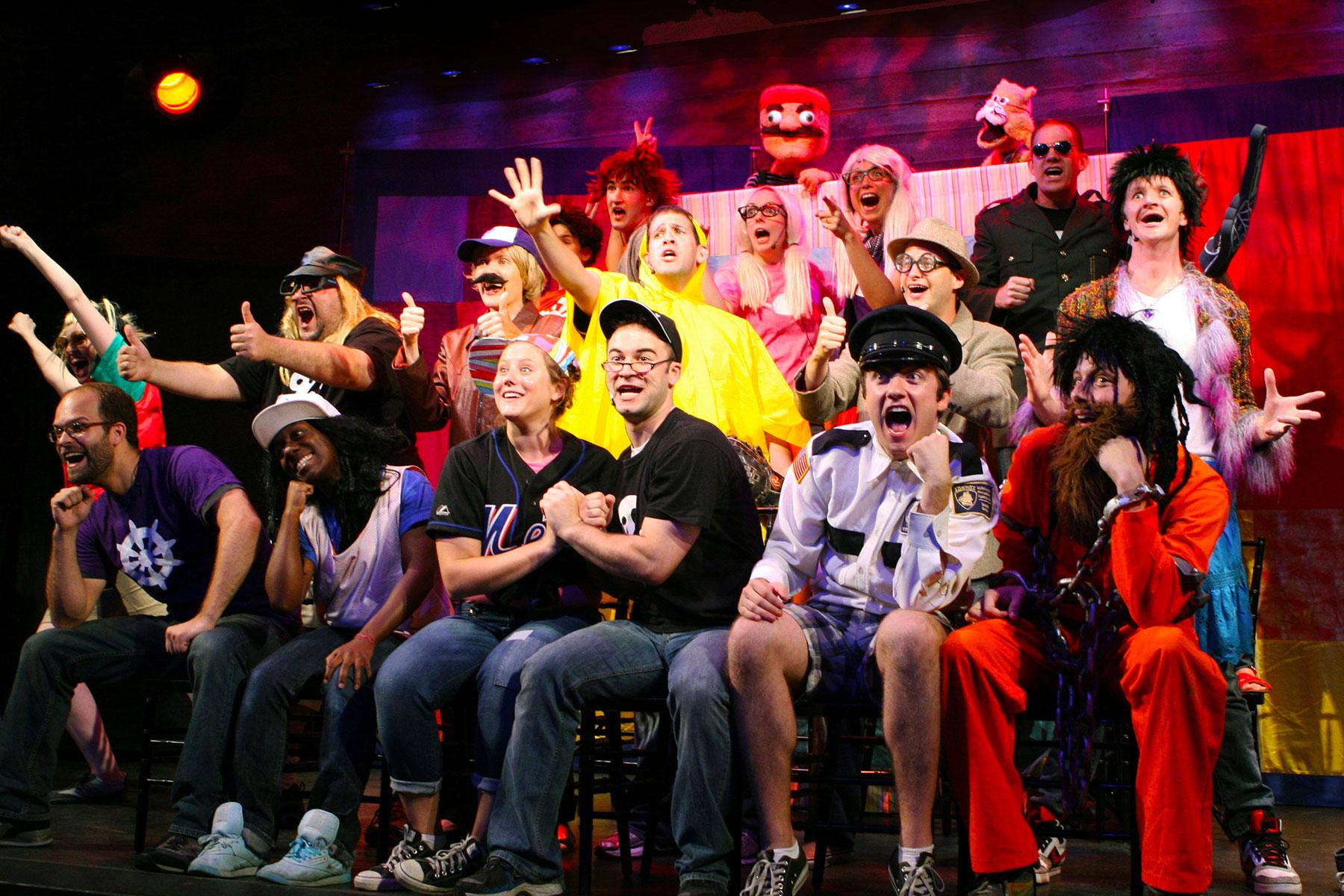 Adults aren’t the only ones who can have fun in NYC. Story Pirates offers a weekly show featuring stories written by kids for kids. Story Pirates perform and lead workshops throughout the country with their home bases in NYC and LA. They’ve also got a SiriusXM radio show and a new series of books; the first one was just released! But don’t think these shows are exclusively for the kiddos. We promise moms, dads, aunts, uncles, grandparents, and all other forms of adults will be laughing just as hard as the performers in these shows also perform throughout the city at theatre’s like UCB, The Magnet, and The Pit (among many others). Story Pirate alumni have gone on to SNL, The Opposition, The Run Down with Robin Thede, and much more. Also, the company offers special “After Dark” shows strictly for adult audiences who may see humor where the kiddos don’t (if you catch my drift).