While it’s hard to pick the best neighborhood in New York City, a day spent in the Meatpacking District is a day well spent. The area, bordered by Chelsea to the north (17th Street) and the West Village to the south, is one of New York’s most fashionable neighborhoods. Twenty years ago, the Meatpacking District housed most of New York’s meat purveyors, but as gentrification began, most of the butchers moved their plants to the Bronx. Today, the area buzzes with art galleries, restaurants, chic boutiques, and nightclubs. The district is only 12 or 13 square blocks – very manageable if you want to spend a day sightseeing, shopping, gallery hopping, and above all, dining on some of the best food in the city.

Fuel up with Breakfast

Our day starts with breakfast, and there are many places to choose from.  If you want to dine with the locals, try Hector’s Café, which may look familiar because it has been the setting for many a Law and Order episode.  Opened in 1962 with a décor that has not changed, Hector’s is tucked beneath the Highline and serves typical diner fare.  No matter when you show up, you are sure to run into a mix of customers including construction workers, club hoppers, and fashionistas.  Bubby’s High Line is another local favorite (as you can see by the crowds).  They’re known for their wonderfully ample American breakfast—try the blueberry pancakes—and the prices are right.

Immerse Yourself in the Art World 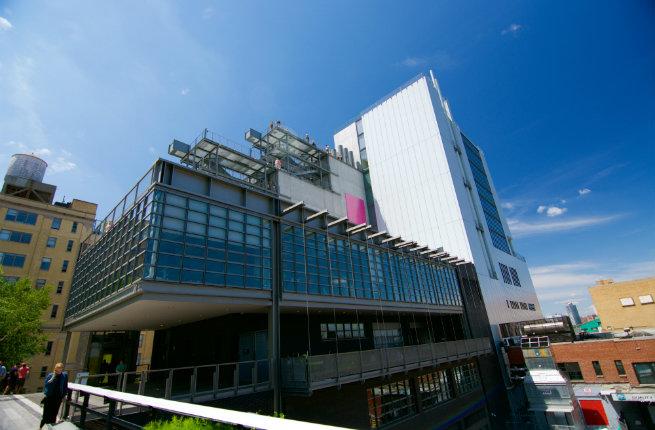 After breakfast, make your way to the new, not-to-be-missed Whitney Museum at 99 Gansevoort Street.  The Whitney moved downtown in April 2015 and has brought this area to a whole new level.  The museum’s unparalleled collection of modern and contemporary art is housed in a stark white building designed by architect Renzo Piano. The spacious, light-filled galleries and views from the outdoor terraces on each floor provide a perfect setting for their amazing exhibits.

Insider Tip: For a sophisticated lunch after touring the museum, you can’t go wrong with Untitled, Danny Meyer’s highly regarded restaurant on the first floor of the Whitney (you do not need a museum pass to eat there, but you may need a reservation).  Another great choice is Santina, where you can dine on coastal Italian fare in a glass-walled, tropical setting right around the corner from the museum. 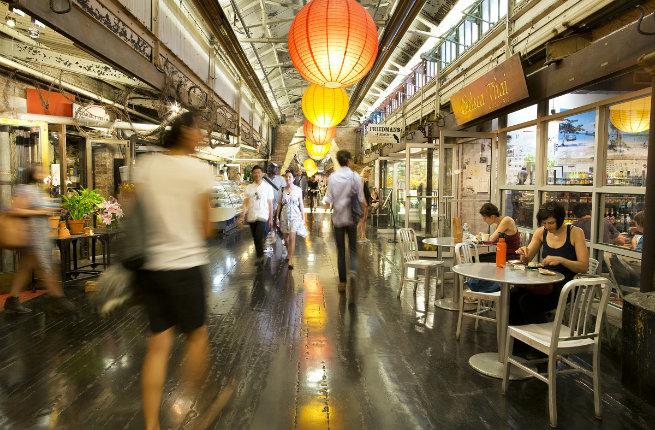 Lunch in this neighborhood is all about Chelsea Market—on 15th street, between 9th and 10th avenues—just a 10- or 15-minute walk from the museum.  Originally the headquarters of the Nabisco Corporation (and the birthplace of the Oreo cookie), Chelsea Market now houses the city’s biggest collection of gourmet-food retailers.  My favorite is the Lobster Place, a huge market that sells fresh fish from around the world.  Walk to the back to order the best lobster rolls in New York, but be prepared to eat while standing, often shoulder to shoulder with your neighbor, at one of the metal topped counters.  If you’re not a fan of lobster, Friedman’s Sandwich Shop is very popular, as is The Creperie.  Among the newer kids on the block is Taco One, where the line for food literally spills out the door—New Yorkers are famous for standing in line and often consider it a great way to meet people.  Deizengoff’s is another new place that serves amazing hummus and vegetable “salatim,” served with fresh-baked pita, chopped salad, and Israeli pickles.

Go for a walk 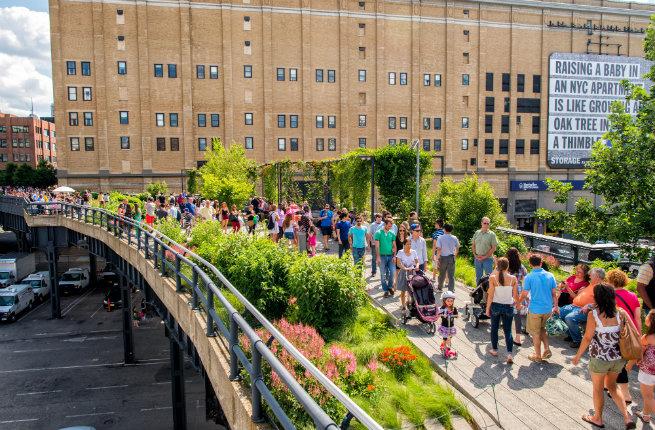 After lunch is the perfect time for a leisurely walk on the High Line, which opened to the public in 2009.  This verdant public park is suspended 35 feet above street level and runs 1.45 miles along the defunct West Side Freight Line rail trestle; you can still see the train tracks along many sections of the park. The High Line begins on Gansevoort Street and runs north to 34th Street, with several exits and entrances to the street level as well as several elevators along the way.  Wooden furniture sporadically placed along the sides allow for a respite as well as a perfect vantage point for people-watching.

For dinner, the Meatpacking District has something for every craving.  You can’t go wrong at The Standard Grill. Housed on the main floor of the trendy hotel of the same name, you can get new American cuisine such as charred octopus and marinated cobia or a divine roast chicken. Outdoor seating is available when the weather cooperates.  The excellent (if a bit noisy) Barbuto, set in a converted garage, serves brick-oven Italian fare in a simple atmosphere, all of which is overseen by executive chef/owner Jonathan Waxman, who won the 2016 James Beard Award for best chef in New York City. On warm evenings the garage doors are raised, offering sidewalk seating.

Ina Yalof is the author of FOOD AND THE CITY: New York’s Professional Chefs, Restaurateurs, Line Cooks, Street Vendors, and Purveyors Talk About What They Do and Why They Do It (G.P. Putnam’s Sons), and she lives and eats in New York City.