10 Broadway Shows to See This Season 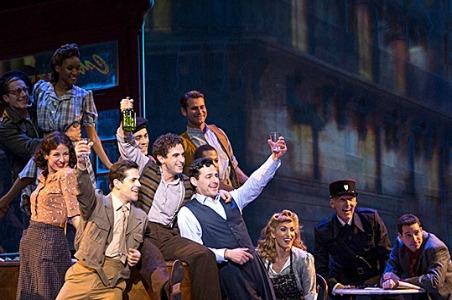 We’re halfway through Broadway’s 2014–15 season, which means that a lot of shows will soon be closing to make way for exciting new productions. In the coming months, more celebrities will grace New York’s stages, while British imports and highly anticipated revivals will be the talk of the town. We’ve looked at the second half of the season and picked out the 10 shows we’re most excited to see. Get ready to plan your next big Broadway outing now.

A-lister Jake Gyllenhaal made his Off Broadway debut in 2012’s If There Is I Haven’t Found It Yet; now, he’s taking his first Broadway bows in a production that reunites him with playwright Nick Payne and director Michael Longhurst. Also starring two-time Olivier Award-winner Ruth Wilson, Constellations explores the infinite possibilities of a first encounter, when a beekeeper and a quantum physicist meet at a barbecue. Currently in previews, opens January 13; buy tickets here.

Fish in the Dark

Seinfeld co-creator and Curb Your Enthusiasm star Larry David has penned his first play, a 15-character comedy about people dealing with a death in the family. Fish in the Dark stars Rosie Perez, Rita Wilson, Jonny Orsini, Jayne Houdyshell, and David himself, who will reportedly play a character very similar to the one he portrays in his HBO series. Previews begin February 2, opens March 5; buy tickets here.

On the Twentieth Century

This 1978 musical, with a score by Cy Coleman and lyrics by Betty Comden and Adolph Green, is returning for its first Broadway revival, starring Kristin Chenoweth and Peter Gallagher. Part farce, part comic opera, part screwball comedy, On the Twentieth Century follows a down-on-his-luck theater producer who attempts to salvage his career by luring his former muse and lover back to the stage. Previews begin February 12, opens March 12; buy tickets here.

Helen Mirren once again returns to the role of Queen Elizabeth II in this new play by Peter Morgan, as directed by Stephen Daldry. For 60 years, the queen has met with the British prime minister in a weekly meeting, the details of which have always remained a secret. The Audience peers behind closed doors and imagines what some of those meetings, with the likes of Winston Churchill and Tony Blair, might have looked like. Previews begin February 17, opens March 8; buy tickets here.

Mad Men’s Elisabeth Moss returns to the stage in the first Broadway revival of Wendy Wasserstein’s Tony Award- and Pulitzer Prize-winning play. Spanning 20 years, the drama tracks the titular Heidi from high school to her adult life as an art historian, depicting how she grapples with feminism, politics, and motherhood along the way. Jason Biggs, Bryce Pinkham, and Tracee Chimo also star in the production. Previews begin February 23, opens March 19; buy tickets here.

The King and I

After working together on the critically acclaimed 2008 revival of South Pacific, Kelli O’Hara and director Bartlett Sher will reunite for another Rodgers and Hammerstein musical. The King and I tells the true story of an American governess who travels to Siam to educate the children of the royal family and finds herself employed by a stubborn king (to be played by Ken Watanabe). Previews begin March 12, opens April 16; buy tickets here.

An American in Paris

Already a beloved movie musical with a treasured score by George and Ira Gershwin, An American in Paris is making the jump to the Broadway stage. Charming and romantic, the musical tells the tale of a young American soldier and a beautiful French girl both seeking new beginnings in the aftermath of war. Previews begin March 13, opens April 12; buy tickets here.

After receiving raves from critics and breaking box office records in London, the Royal Shakespeare Company’s production comes to New York for a limited run. Based on the celebrated novel by Hilary Mantel, the play depicts lust, power, and politics in the court of King Henry VIII. Guaranteed to be one of this season’s most talked about theatrical events, the play is split into two performances, which will be acted in repertory. Previews begin March 20, opens April 9; buy tickets here.

Based on Alison Bechdel’s graphic novel, Lisa Kron and Jeanine Tesori’s one-of-a-kind Fun Home was a runaway Off Broadway hit when it played The Public Theater in 2013. Now, it makes the leap to Broadway, in a production with Michael Cerveris, Judy Kuhn, and other members of the original cast. Previews begin March 27, opens April 19; buy tickets here.