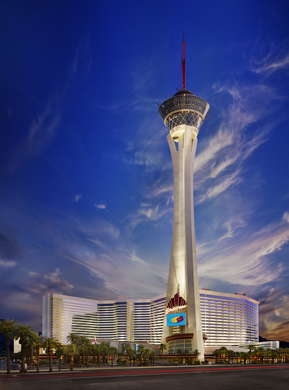 The Stratosphere's 1,149-foot observation tower soars over every other building in town, and it's an iconic part of the Las Vegas skyline. The tower itself contains one-of-a-kind thrill rides, a fantastic restaurant (Top of the World), and a great bar (Level 107). Down below, in two hotel towers, standard rooms were renovated in late 2010 and are now downright sumptuous for the price. (Stratosphere Select rooms, with a touch more space and higher-end amenities, also are a decent value.) Restaurants worth exploring: Roxy's Diner, a throwback greasy spoon, and Fellini's Ristorante, an old-school Italian restaurant that harkens back to the days of Mob-influenced Vegas. The most popular show, Pin Up, is burlesque with a twist and is great fun.

The Stratosphere Casino, Hotel & Tower is that tall structure you see on the north end of the Strip. It has the distinction of being the tallest observation tower in the U.S. With four thrill rides up top, it’s a daredevil magnet. The rooms are not fancy but they are affordable, and the property offers enough thrills to offset the average amenities.

Even though the room rates at the Stratosphere are shockingly low, don’t let this dissuade you from staying here. But know that you’re not getting a hint of luxury, but you’ll certainly be getting your money’s worth and more. You’re not going to want to spend too much time in your room anyway, what with all the thrill-seeking that awaits. 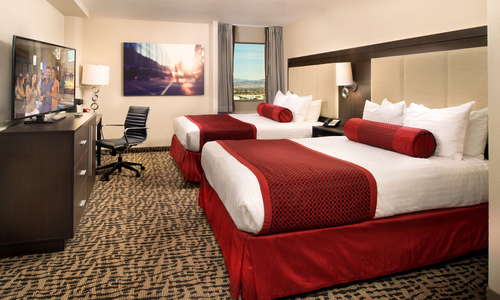 It’s a standard hotel bathroom, with a shower/tub combo. Nothing to write home about, but it is clean and everything works.

The Stratosphere is the hotel of Vegas from 20 years ago--no frills, a pervasive smokey smell, and patrons that look like they’ve been there a while. 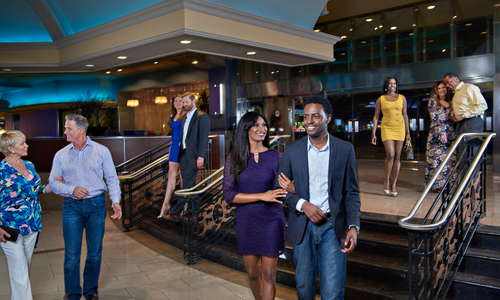 Elation Pool on the eighth floor offers incredible views and plenty of chaise lounges to get your tan on. 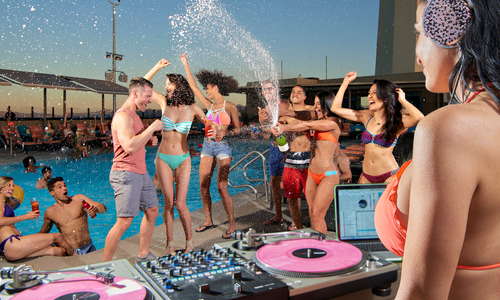 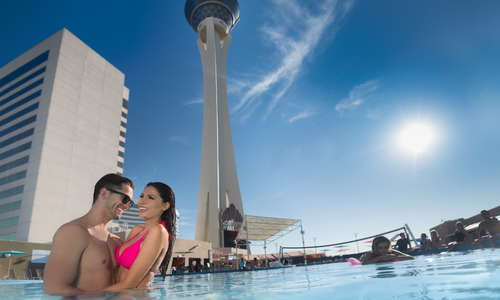 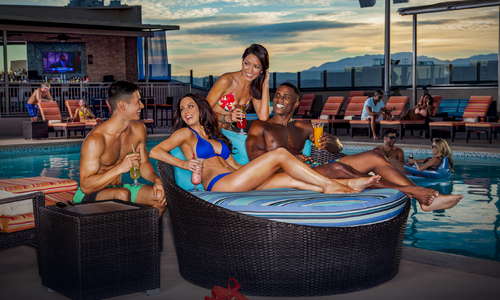 The Roni Josef International Salon Spa has a full menu of services including massages and facials. There is also a full-service salon.

The Top of the World restaurant, at the top of the tower, is one reason to come to the Stratosphere. It has the novelty of rotating 360 degrees in 80 minutes so you get a sweeping view of the city.

The Top of the World restaurant is one of the most romantic restaurants in Las Vegas. Many proposals have been carried here, and in fact, there's are Romance Proposal Packages available in different price points, depending on how fancy you want to get. 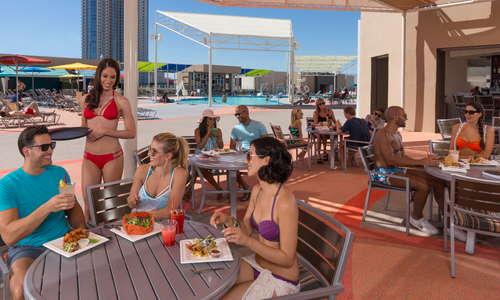 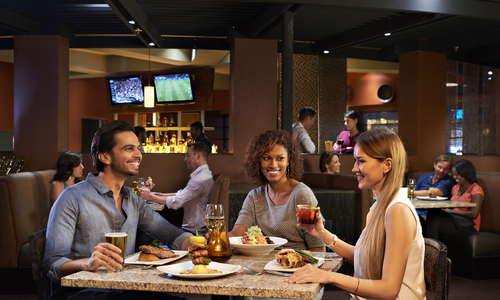 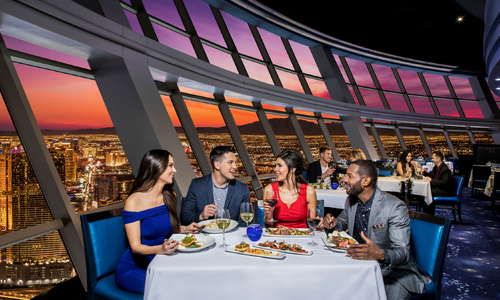 The 107 SkyLounge offers the same view atop the observation tower, but lighter on the wallet, especially during two-for-one happy hours, which happens twice daily. There are also other cheap options throughout the hotel, such as the C Bar in the casino. 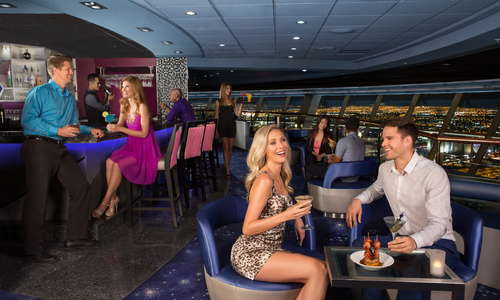 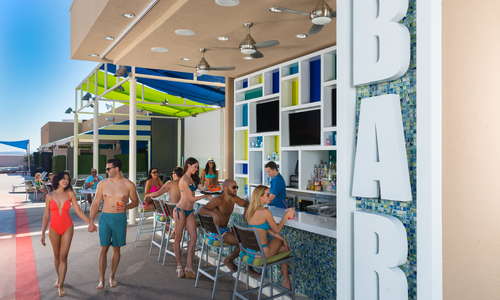 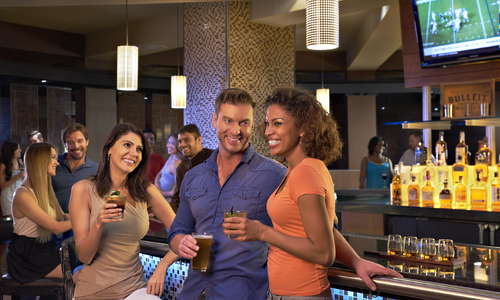 There are plenty of places to walk to from here, but to if you want to go center Strip or beyond, you might want to take monorail. If you want to explore Downtown Las Vegas, known around these parts as DTLV, take the city bus called the Deuce, a double decker that picks up right across the street.

The Stratosphere’s closest neighbor is SLS Las Vegas a half mile away, where there are plenty of restaurants to explore, including Jose Andres’ Bazaar Meat (15-minute walk) and the Mediterranean-inspired Cleo.

DTLV has dive bars galore, full of history and cheap drinks. Dino’s (15-minute walk) has karaoke, while Frankie’s Tiki Room (8-minute drive) is exactly what you picture a tiki bar should be.

Luxury is overrated. Sometimes you just a view with a thrill. In that case, Stratosphere fits the bill. 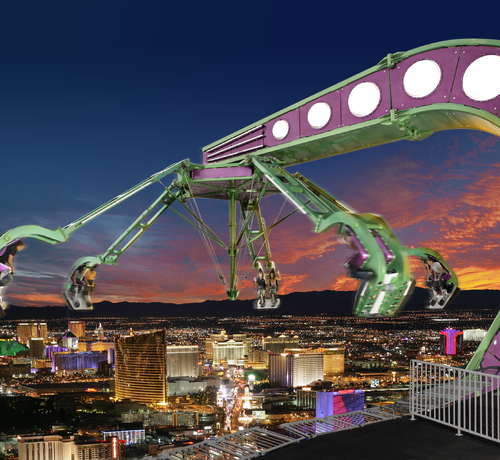 #6 The 6 Best Hotels Near the Las Vegas Convention Center 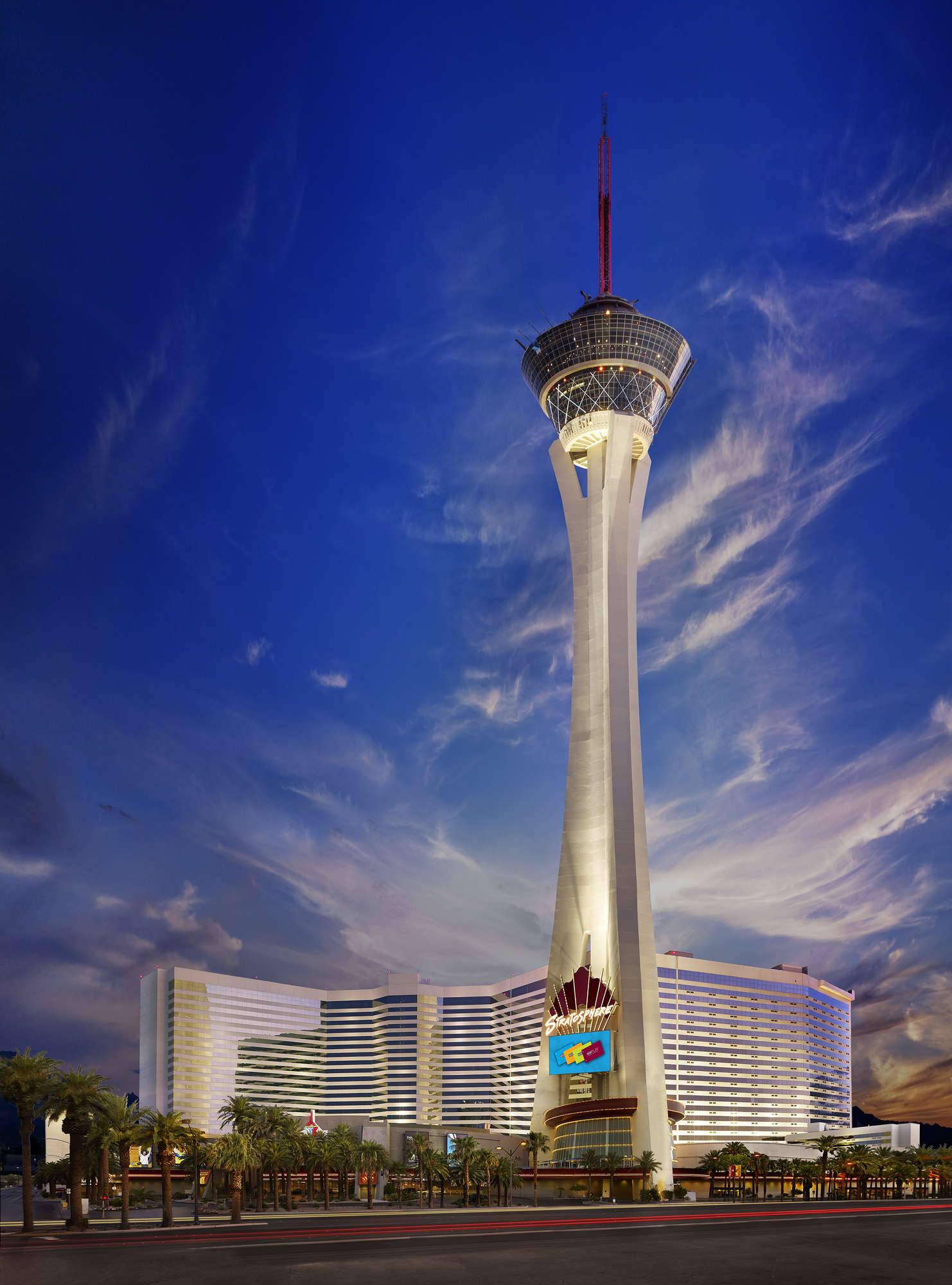 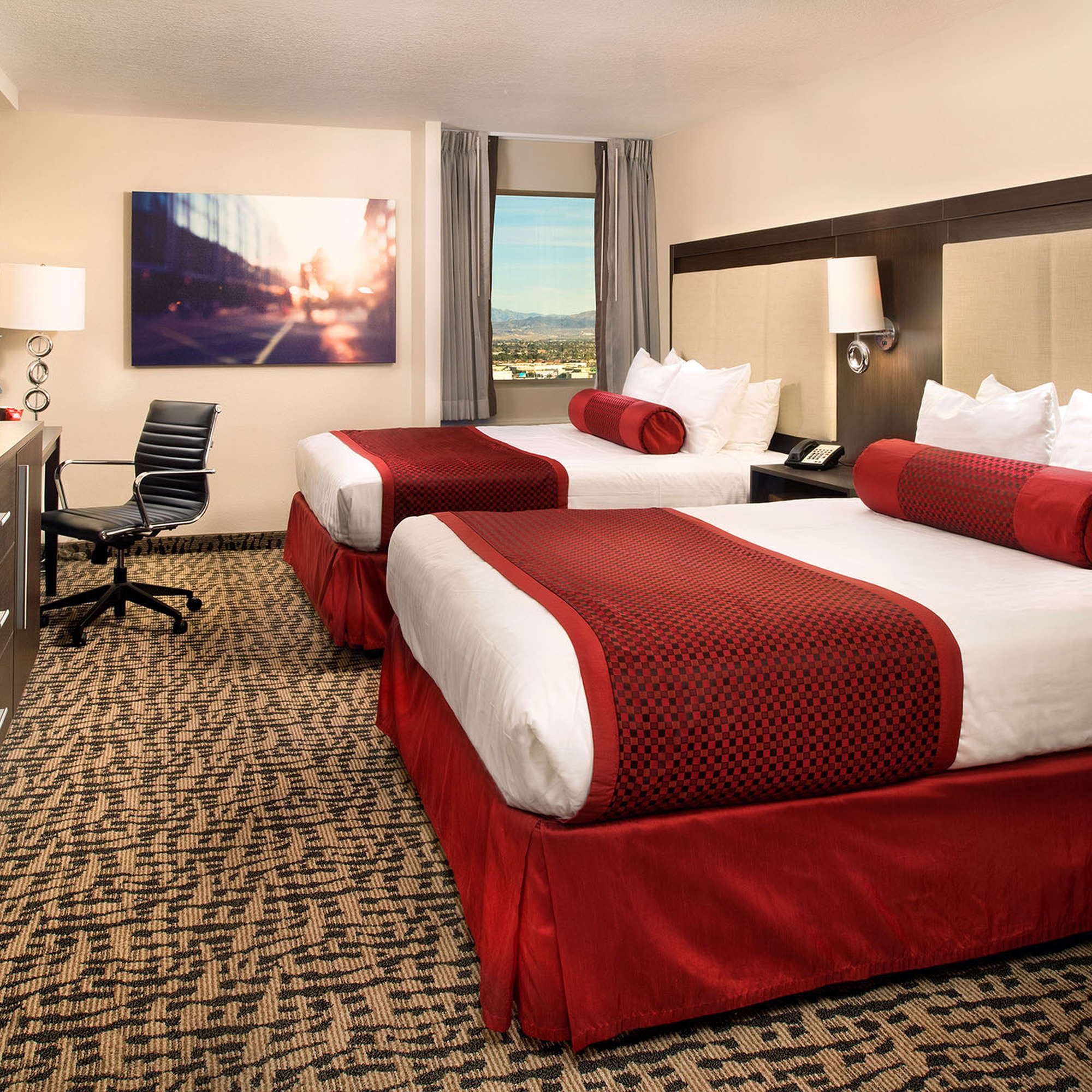 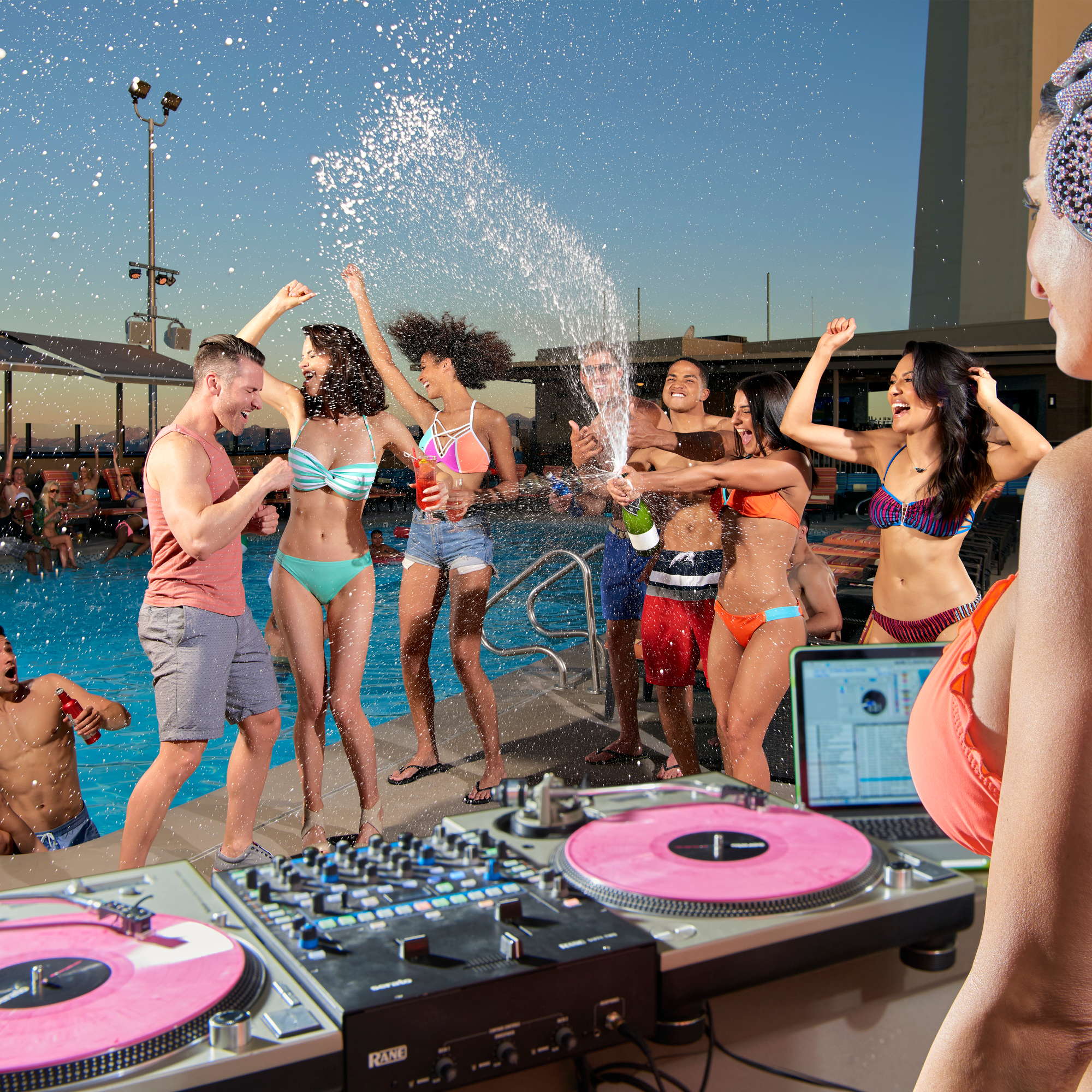 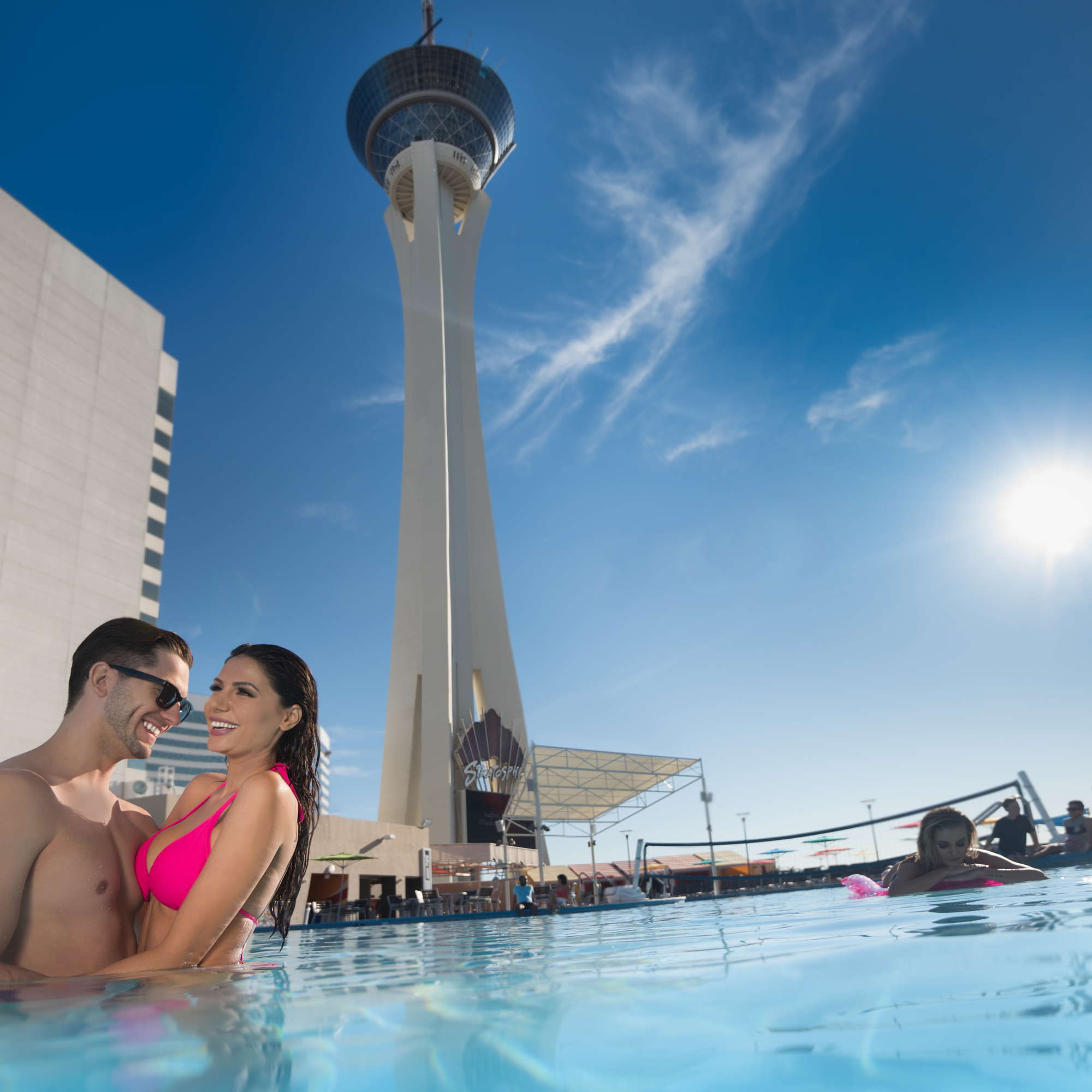 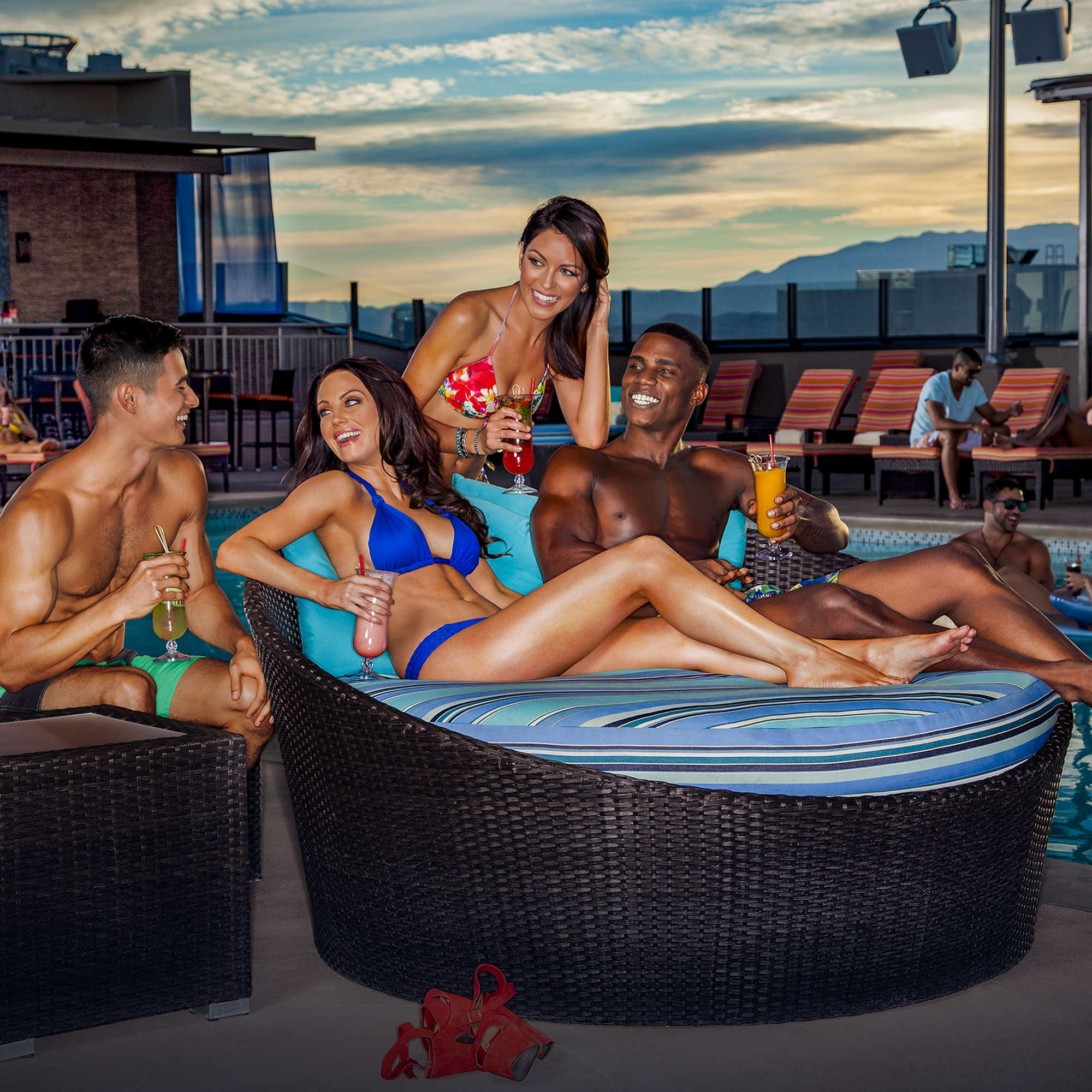 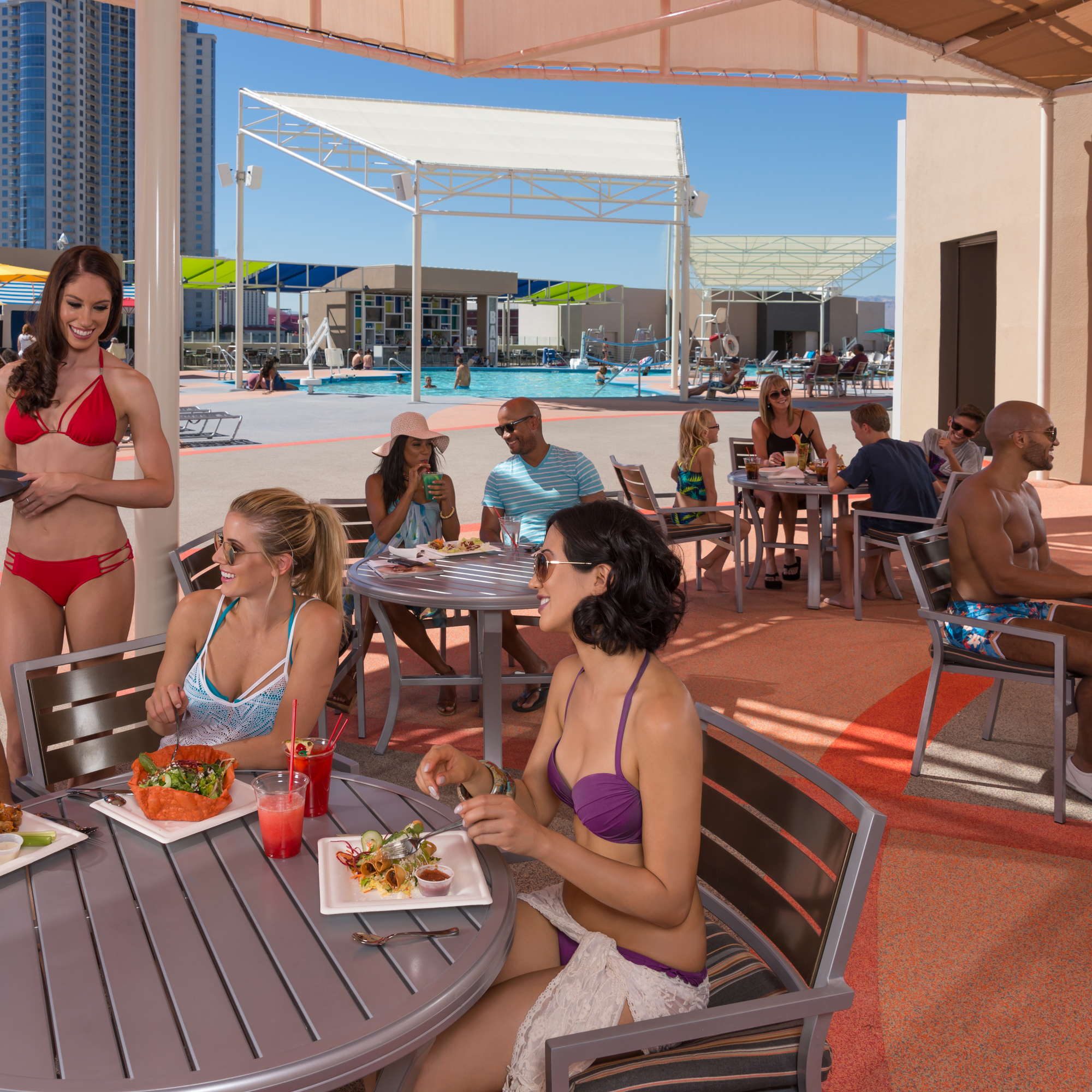 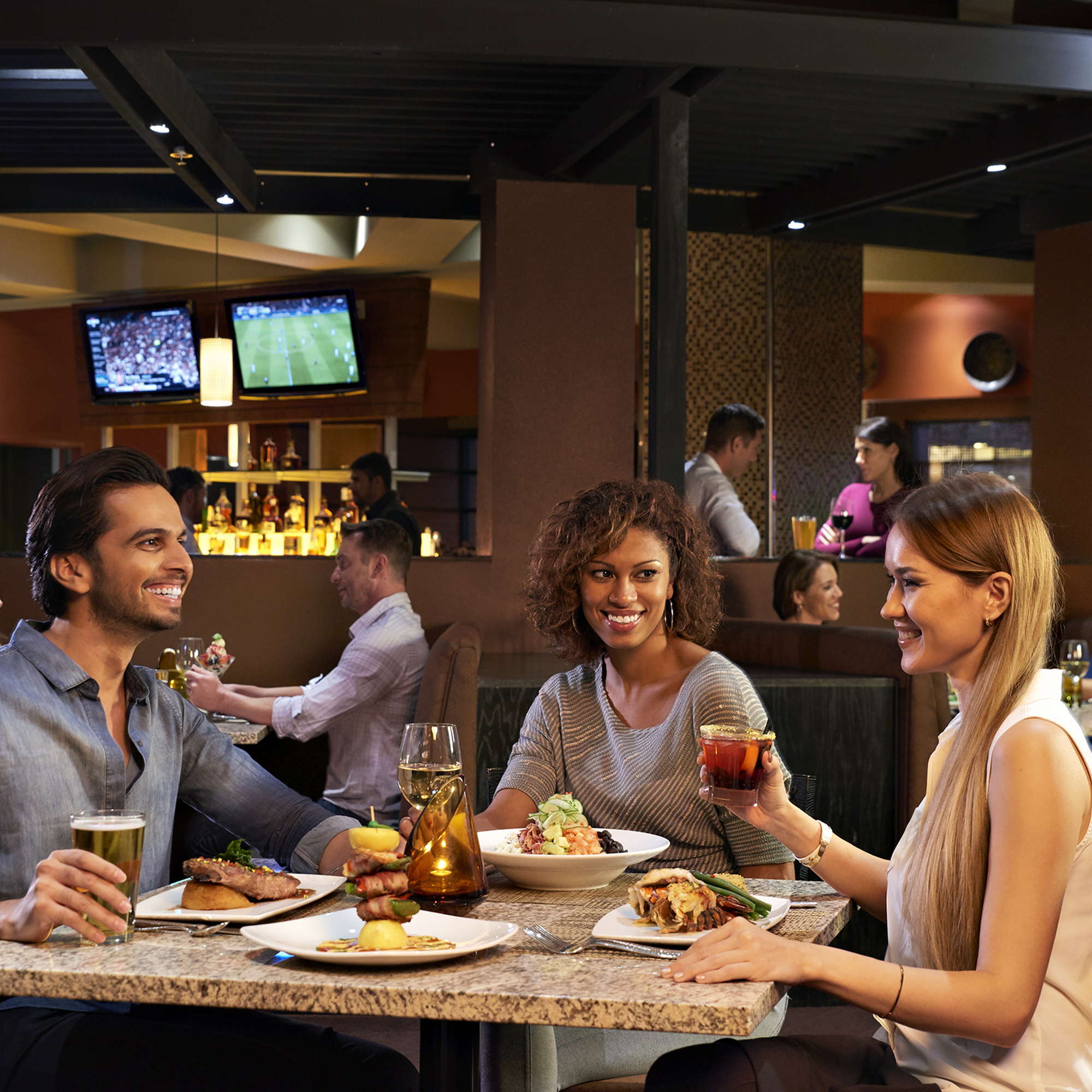 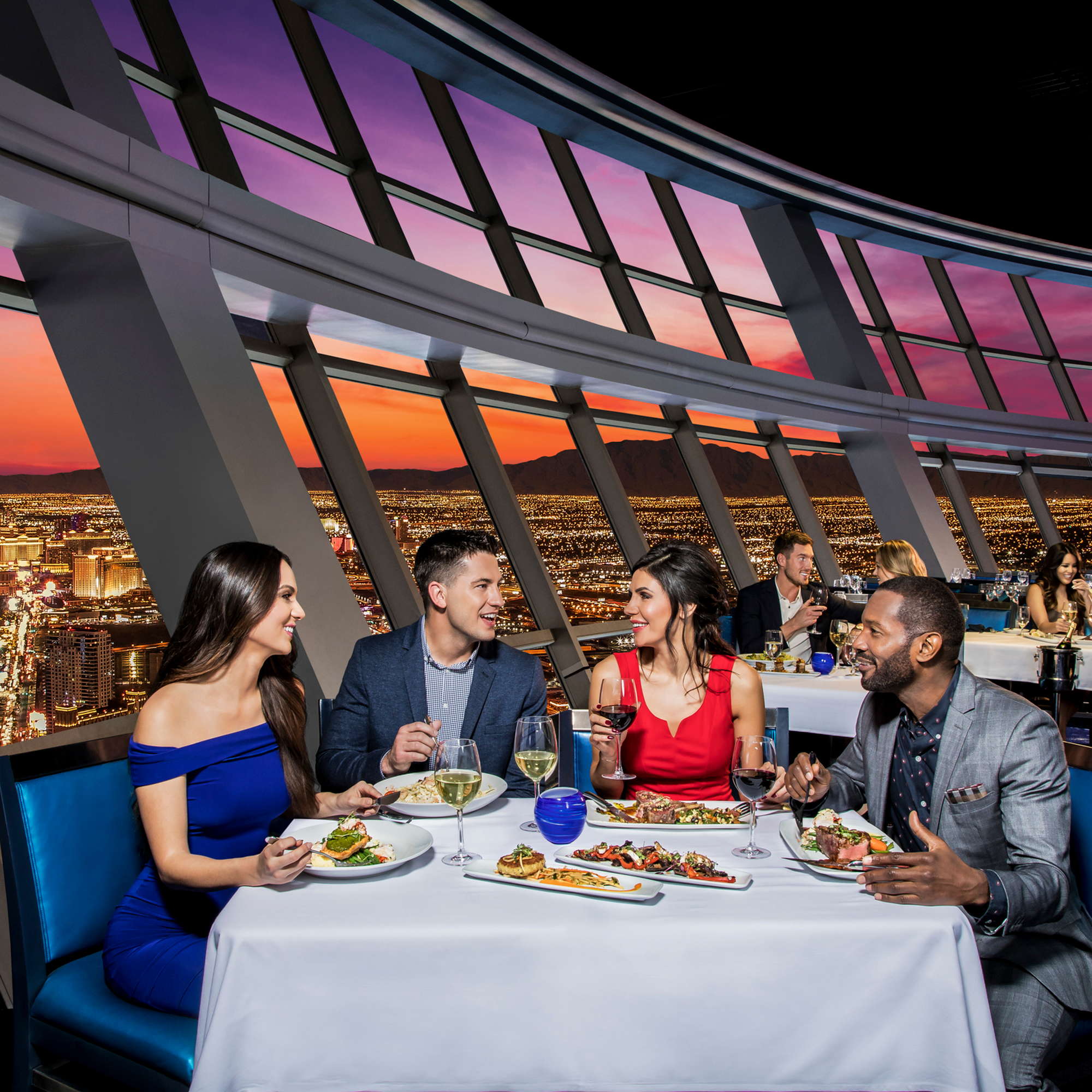 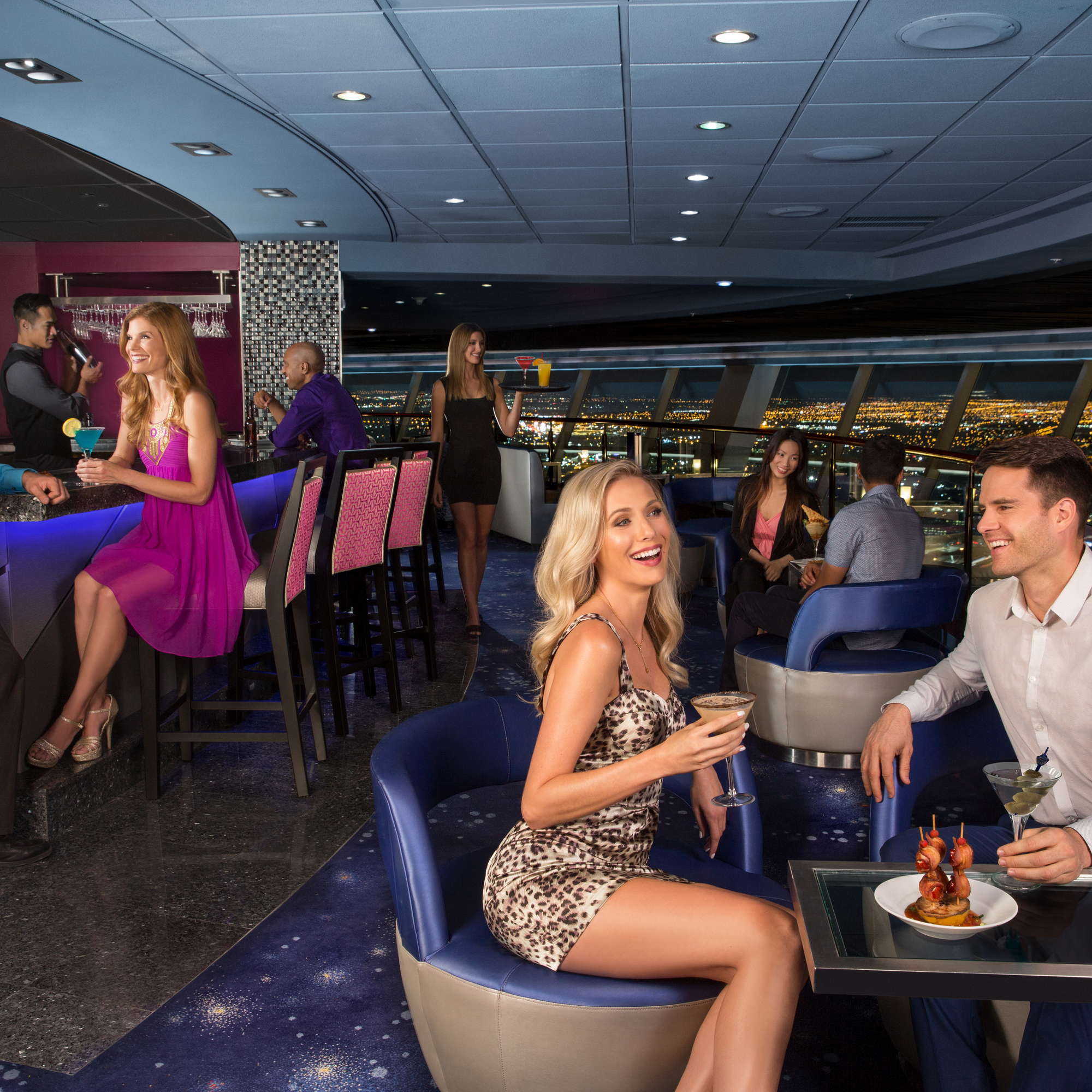 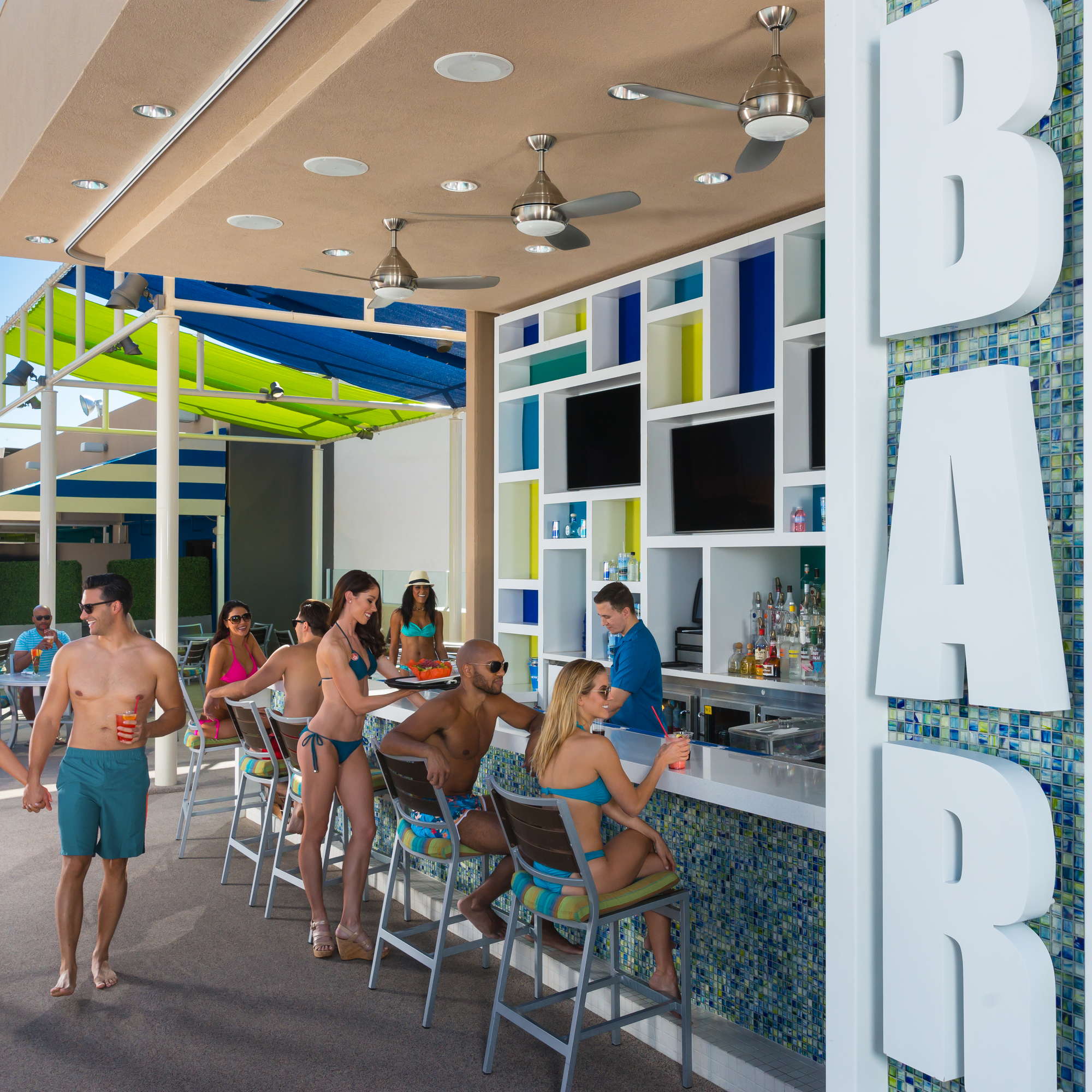 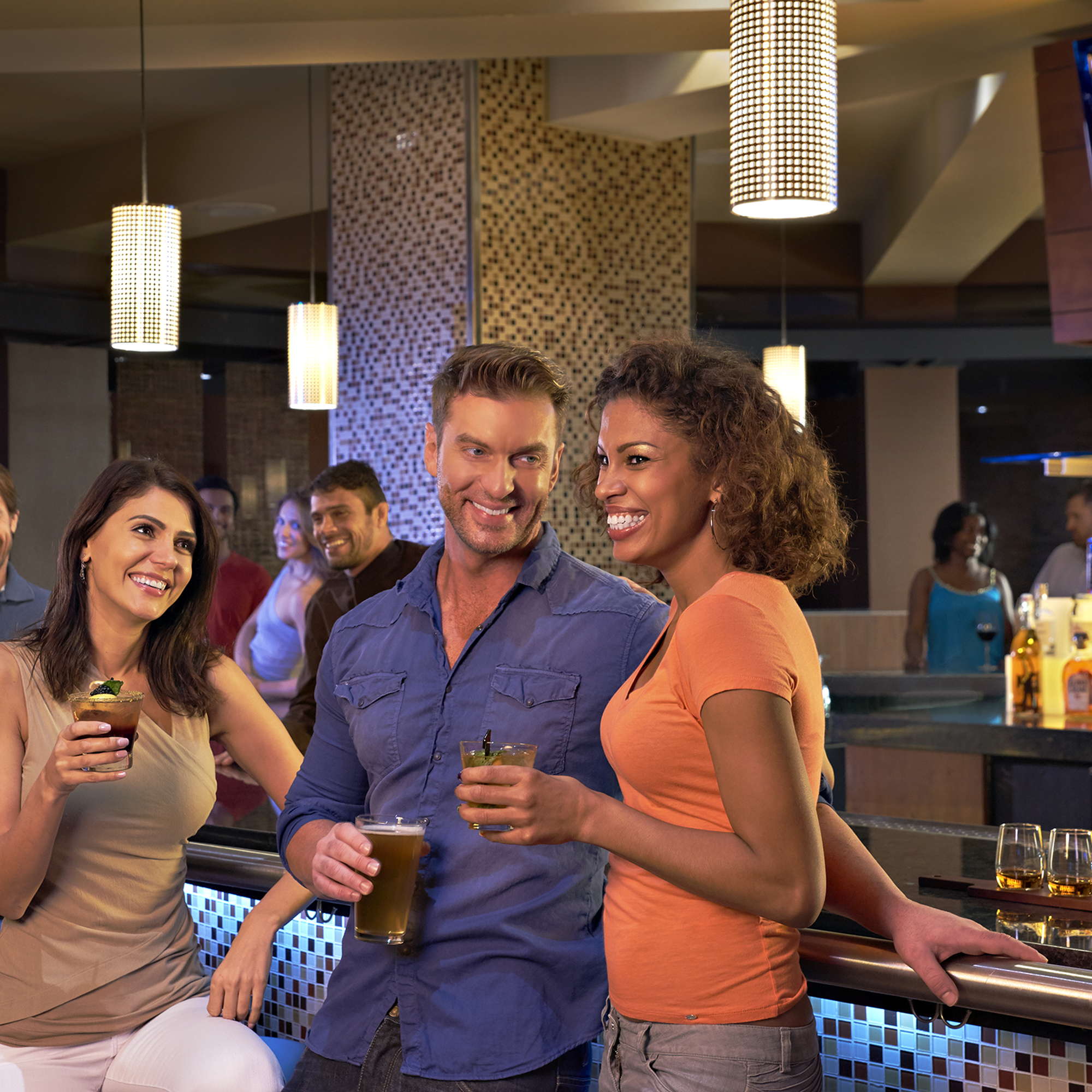