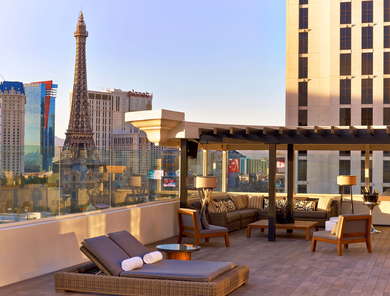 The hotel from celebrity chef Nobu Matsuhisa and partner Robert DeNiro is a sleek foodie haven tucked inside the Caesars Palace complex. The 181-room tower designed by David Rockwell features feng shui spaces and minimalist, natural-hue rooms. The amenities are all worthy of the celeb owners (and guests), from the Italian linens and custom Natura Bisse products to the gourmet, Nobu-selected minibar with things like blood orange–chili juice and Pocky chocolate sticks. There are also a host of high-tech touches, like a Nobu app, in-room iPad check-in, and buttonless elevators (they get activated by your key card), plus 55-inch flat-screens with Apple connectivity. Guests also enjoy a dedicated concierge, but the real perks are aimed at the stomach: priority reservations at the Nobu restaurant; an exclusive Nobu-crafted room-service menu; and a green-tea welcome gift.

Nobu Hotel is as exclusive as you can get. Tucked inside Caesars Palace, the boutique hotel is almost like a secret, albeit an expensive one. It offers the best in everything, right down to the smallest details, not unlike the elegant food Chef Nobu Matsuhisa is known for. Here you are paying for the details, from the Italian sheets and the feng shui rooms to the minibar stocked with blood orange chili juice, sake and Japanese beer.

YOU SHOULD KNOW Nobu Hotel is not for the light of wallet. Room rates range from $150 (on sale) to $35,000/night for the penthouse. 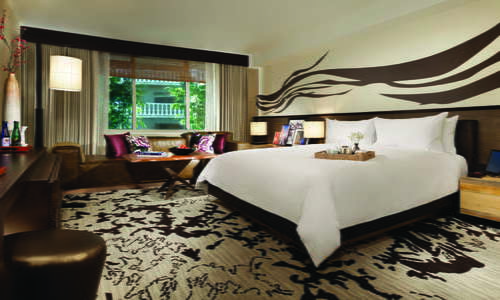 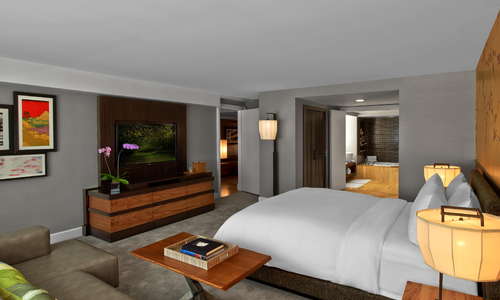 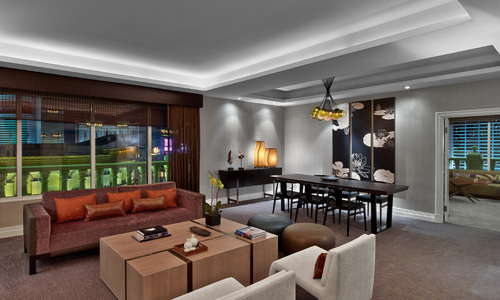 Bath amenities are so exclusive you won’t find them anywhere else, because they are specifically made for Nobu only, from the handmade toothbrushes. the custom rosemary and white tea scent, scented sleep oils and the Natura Bisse bath amenities, no detail has been overlooked. 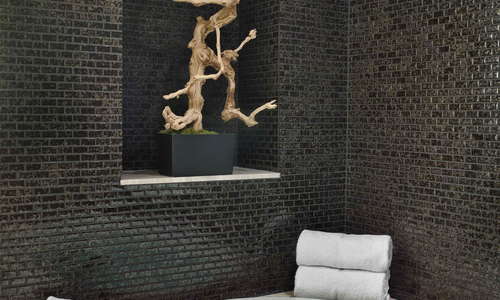 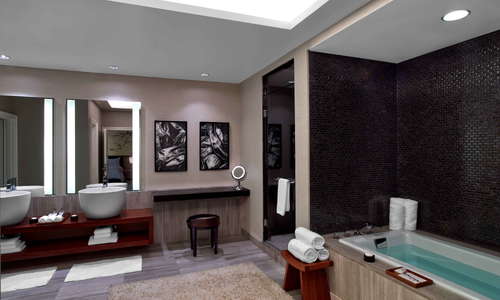 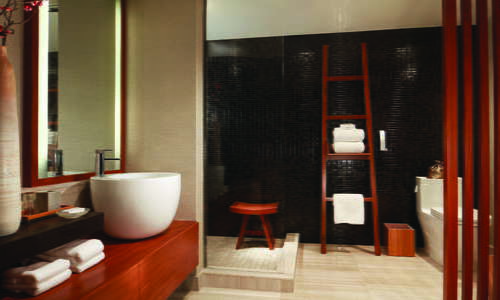 Away from the activity at Caesars Palace, Nobu is another world altogether. Zen is the mood evoked here, with Japanese-inspired décor mixed with sleek, modern touches. Plum and gold accent furnishings and clever artwork dot the place, and getting to your room is so exclusive that the elevators don’t even have keys; your key card is read by an optical scanner, whisking you away to your floor. 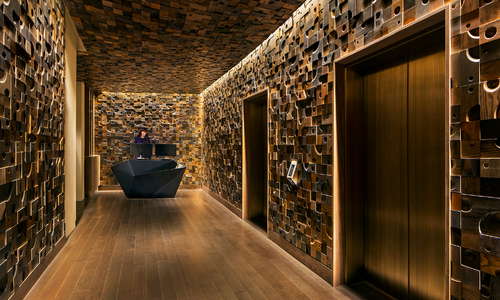 Guests have access to Caesars Palace’s Qua Baths & Spa, a 50,000-square-foot spa with three Roman baths that use the ancient healing powers of water and a snowing Arctic Ice Room that is the only one of its kind in the world.

Take a break from all that sushi eating and sake drinking and burn some calories at the fitness center on the 72nd floor, where you’ll find treadmills and flexibility-enhancing machines for stretching.

This is the mothership of the world-renowned Nobu brand, boasting the world’s largest Nobus restaurant—a dining area of more than 11,000 square feet, with an adjacent lounge featuring a sushi bar, a private dining area and a circular central bar. It is also the only U.S. Nobu restaurant with teppan tables.

The best part about staying at Nobu Hotel? 24-hour access to sushi rolls and exotic delicacies, as well as breakfast—blueberry and yuzu soba pancakes and an order of eggs Matsuhisa with roasted asparagus, bonito egg sauce, ikura and toasted bao, anyone? 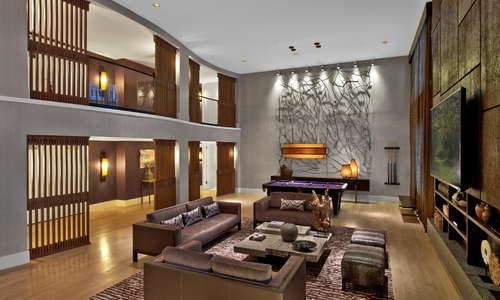 The ultra-luxe and stylish Nobu Lounge stocks three rare sakes from Japan's Hokusetsu brewery on Sado Island, one of which is made by hand and goes through a slow drip process. You can also order appetizers not available in other Nobu locations.

Nobu offers a variety of wedding packages ranging in price from $3,000 to $15,000, with the ceremonial sharing of sake to symbolize the formal bond between bride and groom.

Caesars Palace is centrally located on the Strip, with plenty of walking opportunities for visiting other properties.

You don’t have to go far to enjoy the myriad offerings at Caesars Palace. Visit the newly opened Pronto by Giada (3-minute walk) for a more casual take on California Italian cuisine from Giada De Laurentiis. Bacchanal (3-minute walk) redefines the Las Vegas buffet and is a must-try for foodies and gluttons alike.

In a city that continually tries to outdo itself, it’s hard to find a more bespoke accommodation than Nobu Hotel. For those who can afford it, it’s luxury without peer, not just in Las Vegas, but anywhere in the world. 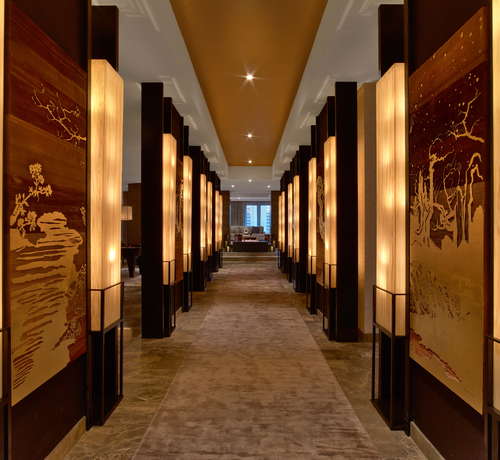 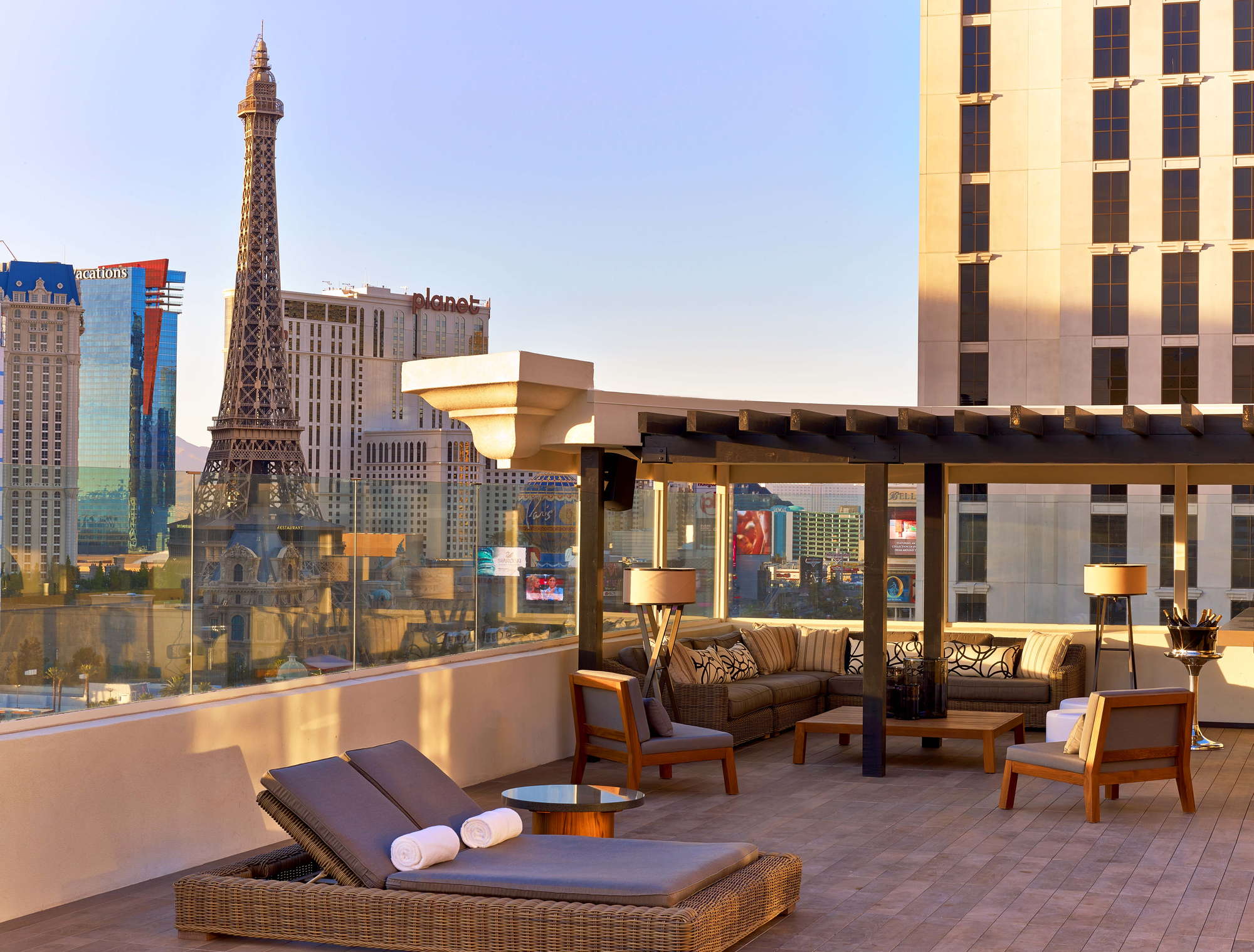 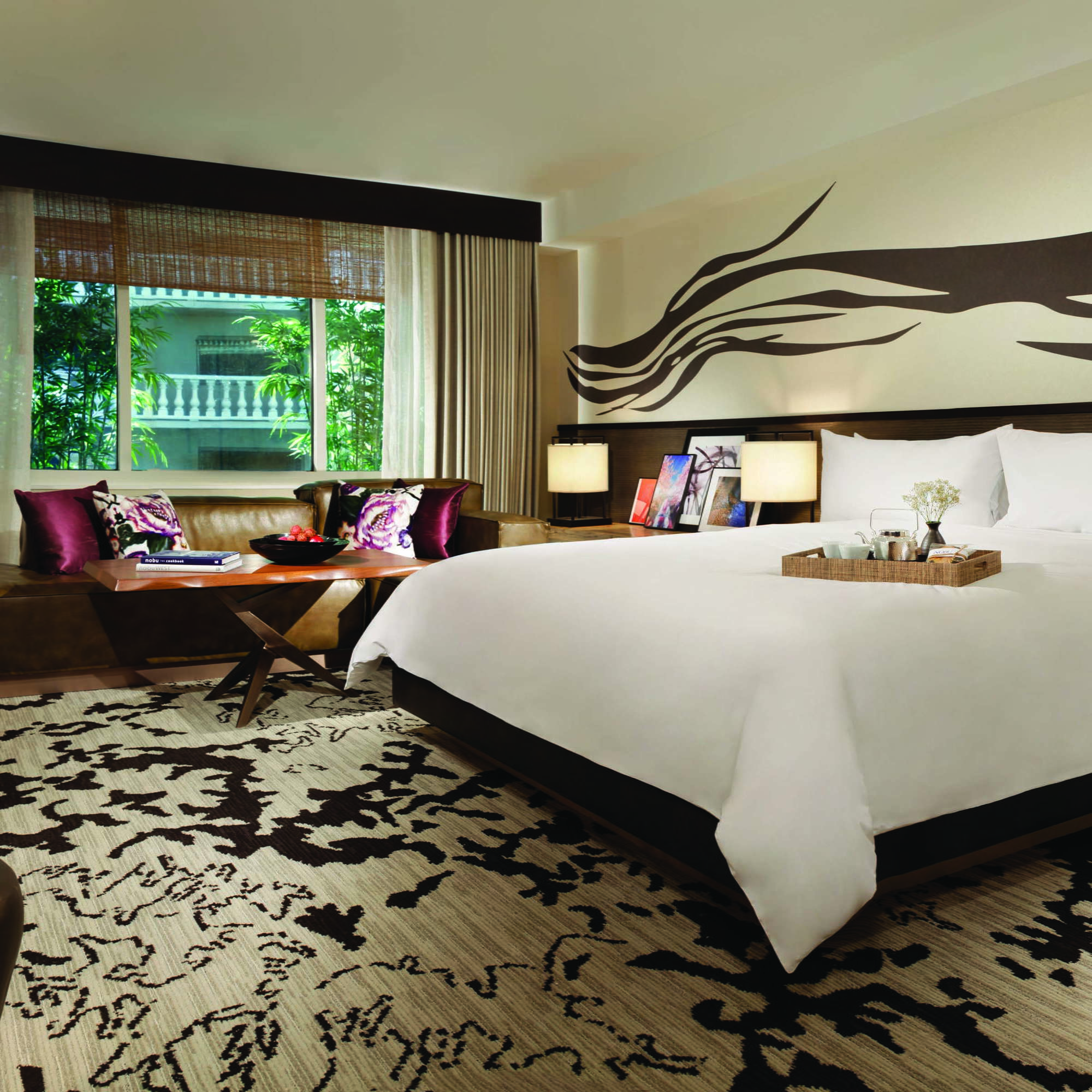 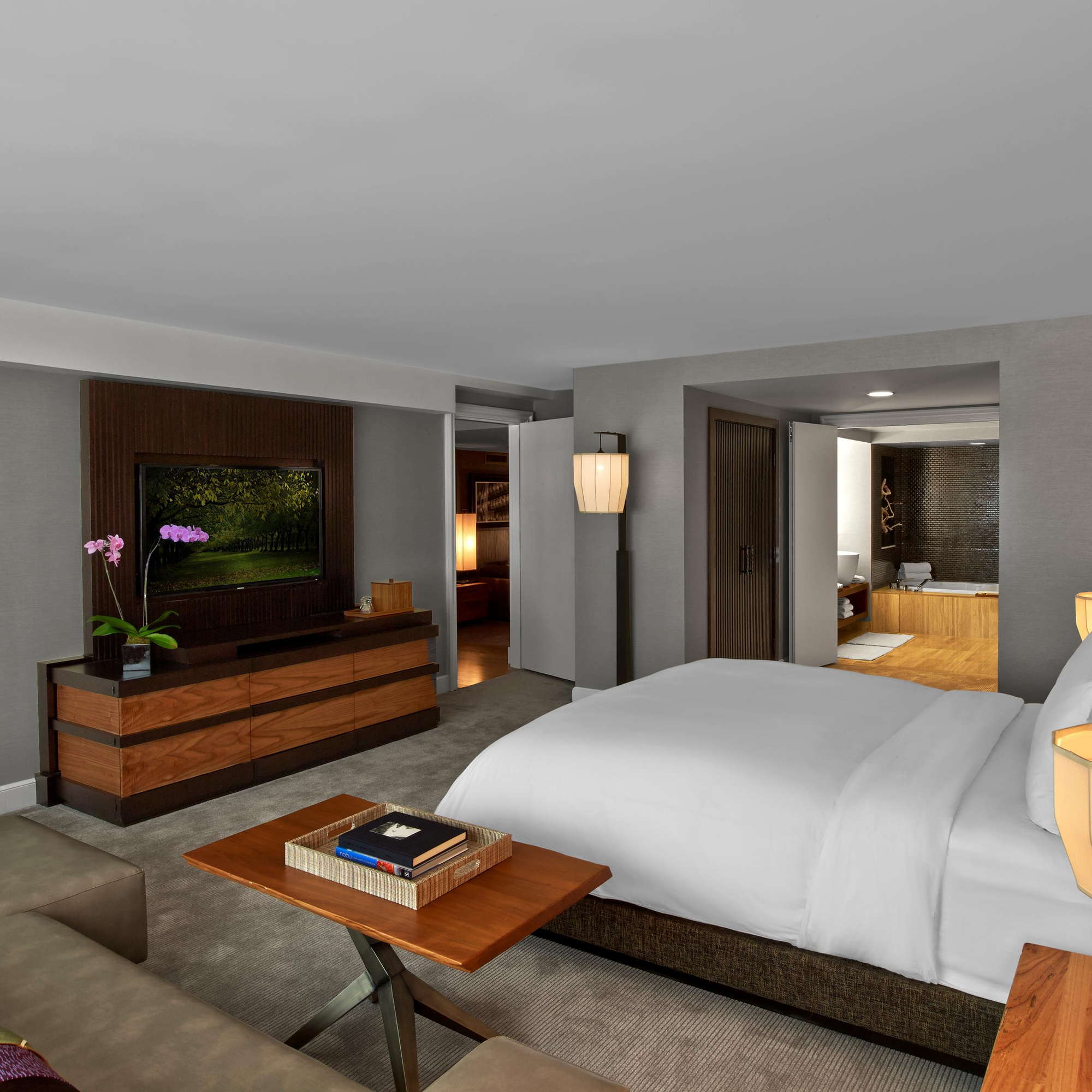 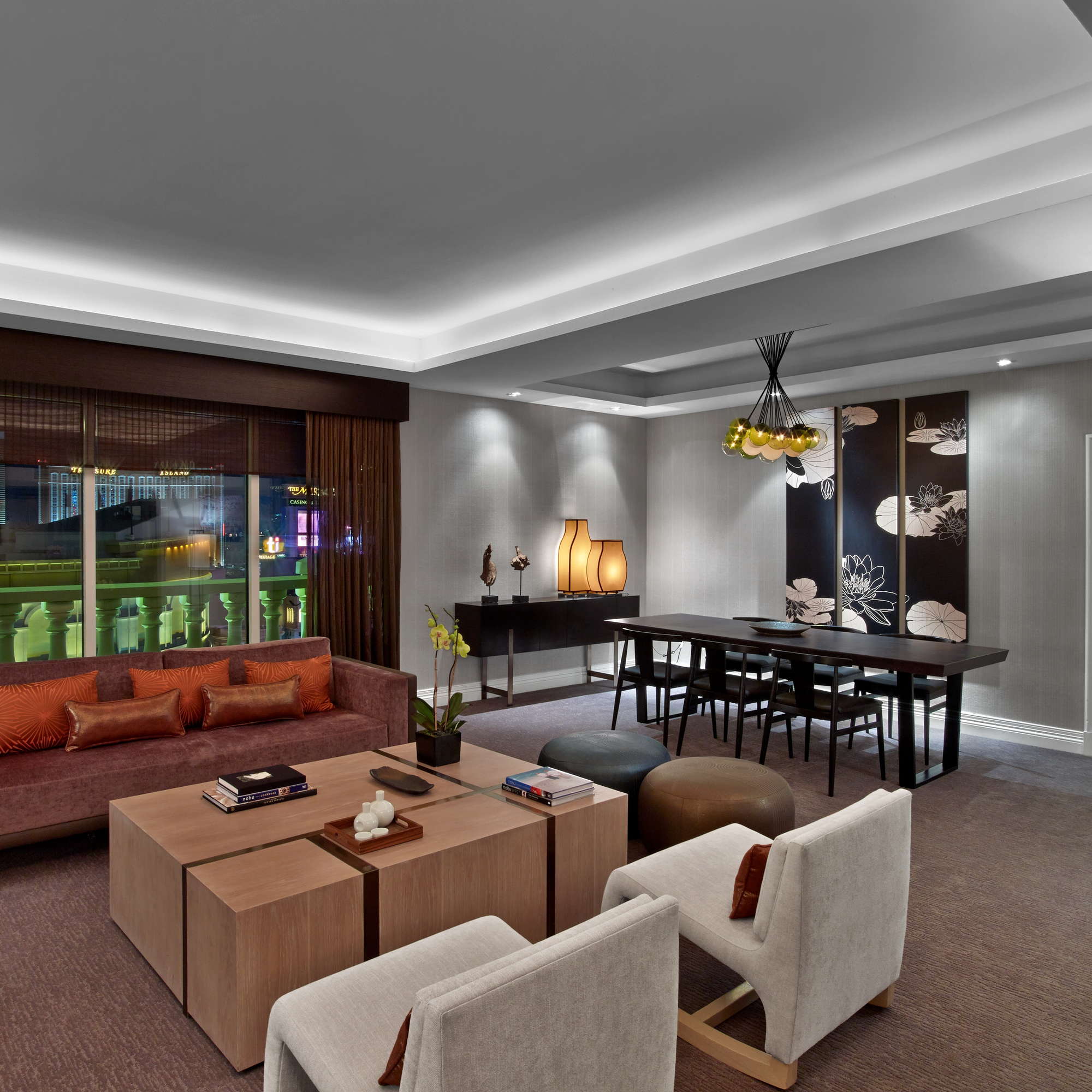 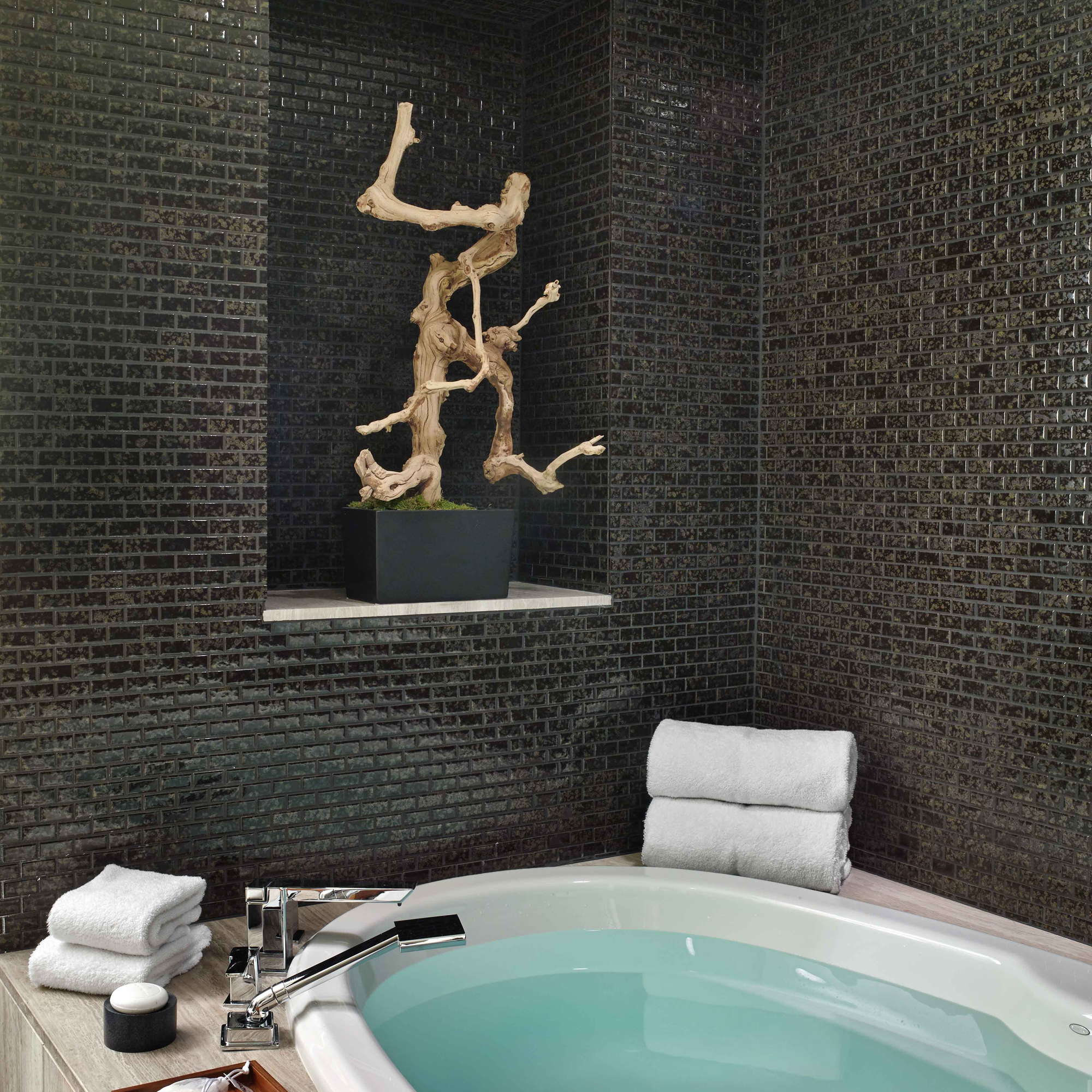 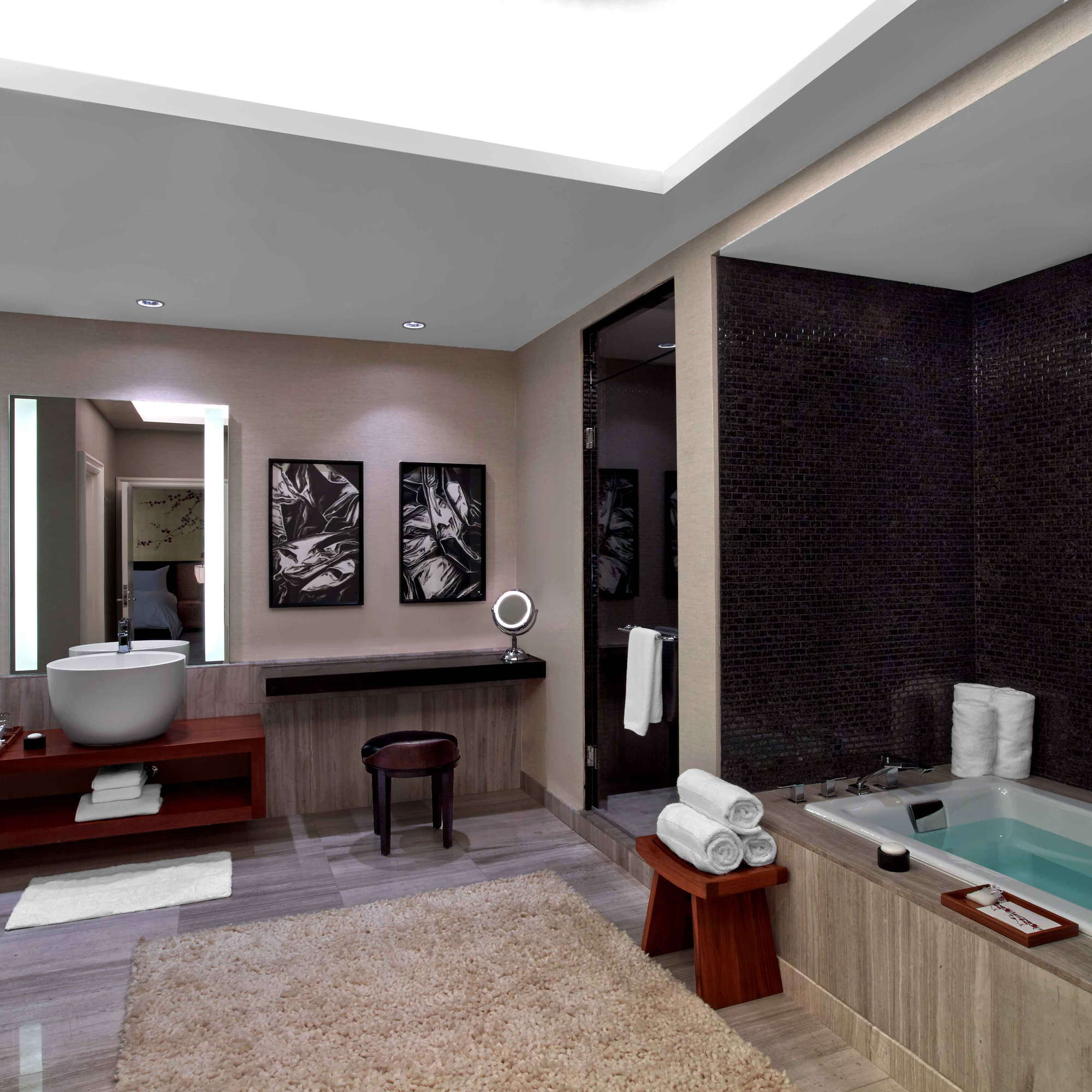 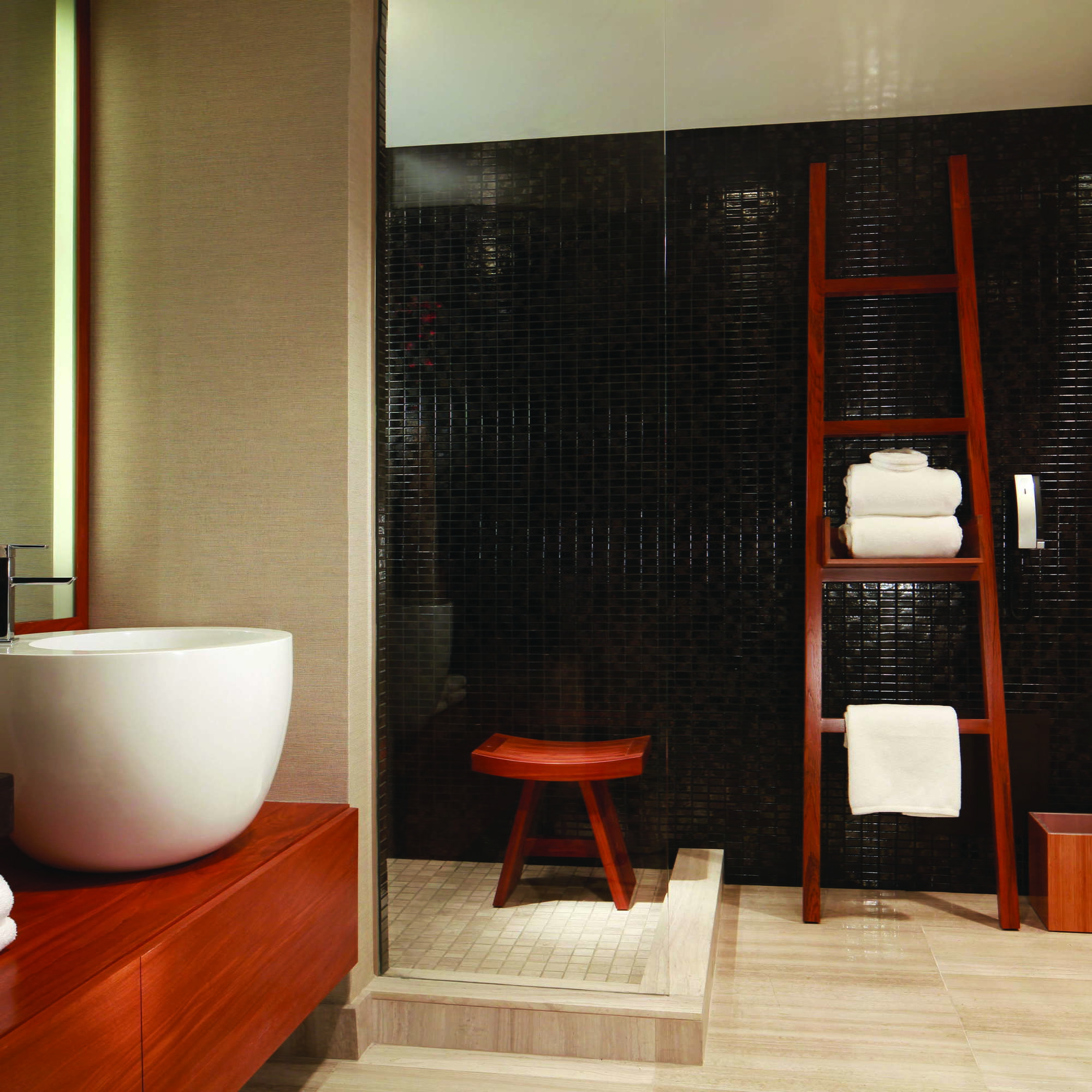 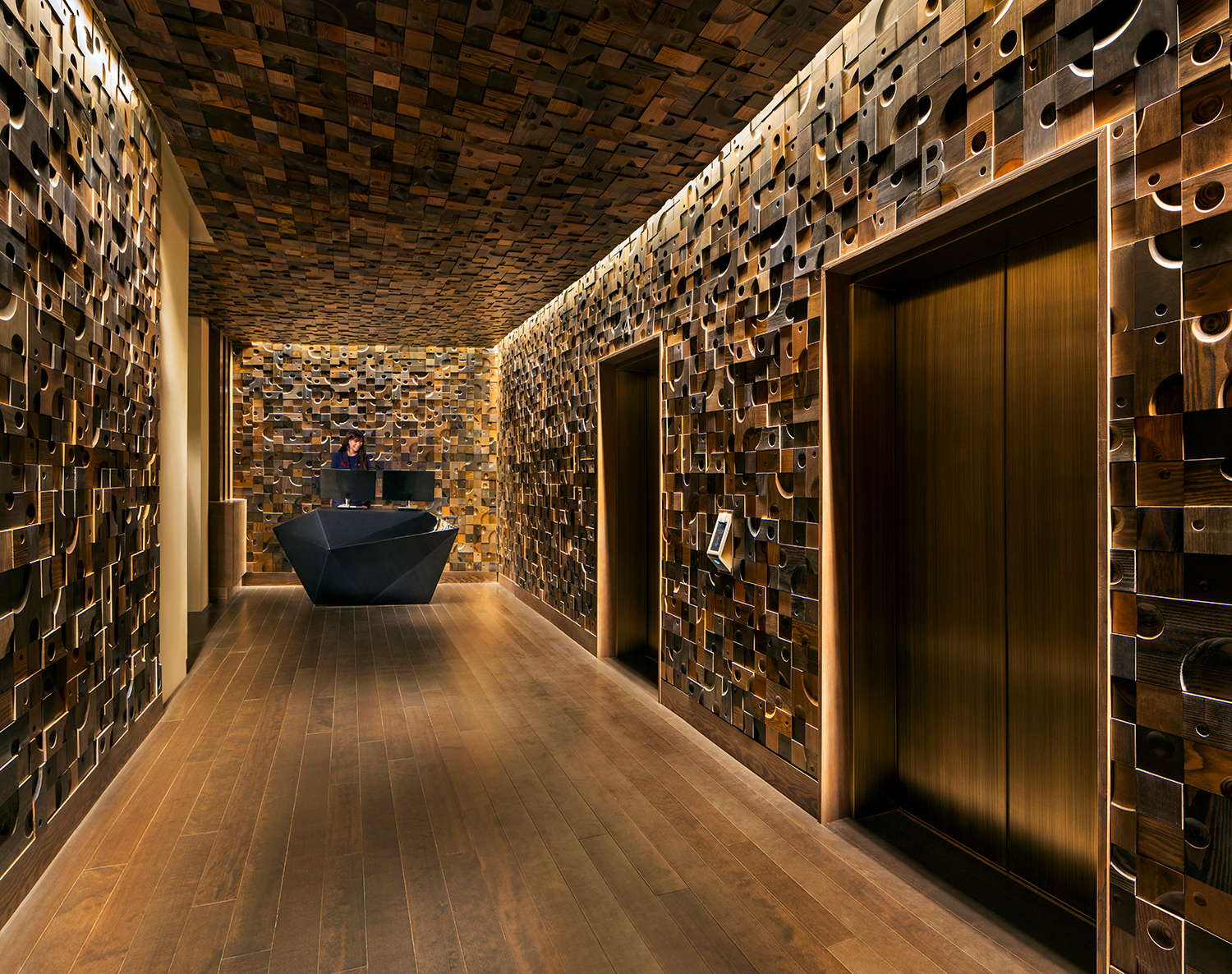 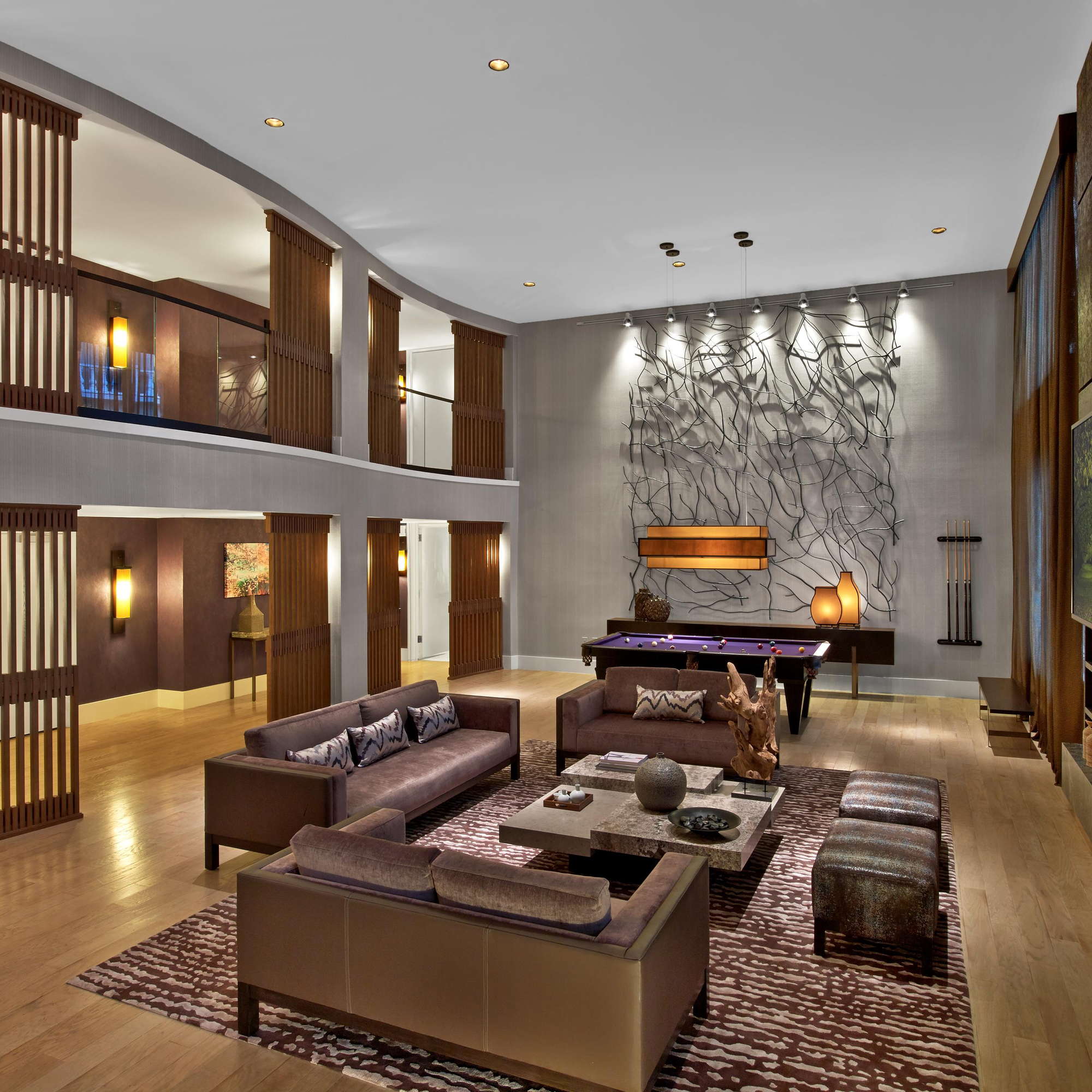