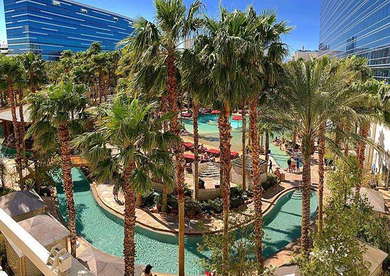 This sprawling resort is a shrine to rock and roll—with rock tributes, exhibits, and authentic memorabilia everywhere. An all-suites south tower, dubbed HRH Tower, opened in January 2010. Across the board, rooms are adorned with sleek furnishings, Bose CD-stereos, and flat-screen plasma TVs that show continuous music videos on one channel. The poker room is a big hit among serious cardsharps. The concert space, The Joint, features top national rock bands, some of whom take up residency for weeks or months. Bands such as Def Leppard, Mötley Crüe, and Santana have played extended runs at The Joint. The Hard Rock's pool area is a tropical beach–inspired oasis with a bar, private cabanas, and swim-up blackjack; it doubles as a favorite filming location for popular TV shows. Very crowded (but fun) public areas offer plenty of opportunities for people-watching; the crowd tends toward young partiers. It's possible to score reasonable rates here on weeknights.

If you love all things rock ‘n’ roll, this is the hotel for you. The music is piped everywhere, from the parking garage to the elevators to the bathroom. It’s a living, breathing museum, with rock memorabilia throughout the property. And the accommodations are exactly what you would expect a rock star to ask for (and some suites are, indeed, named after rock stars). The Bachelor Pad Suite, for example, has a full bar, a dance pole, lap dance booths and a mirror over the bed. Over the top? Nah, just right. 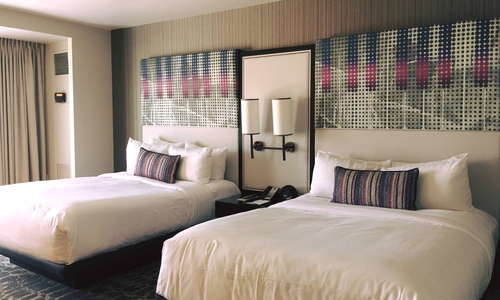 The bathrooms here are as individual as the rock stars (or wannabes) who occupy them. The specialty suites have bathrooms so enormous you can hang out there with your posse and your groupies.

The Real World Suite is so named for the MTV reality show that filmed here. Bring nine of your closest friends and re-create your own Vegas fantasy. The bathroom has a mother of pearl-tiled tub overlooking the Strip that can accommodate five people. Three bedrooms, a pool table and a bowling alley—because why not?

From the moment you step into the Hard Rock Hotel, the vibe is party time. The cacophony of the casino floor combined with the rock ‘n’ roll music makes you instantly want to dance (or at least rock your head up and down). You just know from this point on, sleep is merely an option.

The Vegas dayclub scene was born at Rehab Beach Club, and it’s still the most happening place when pool season opens.

Reliquary Spa has a large menu of services, including the Rock Star Massage, its version of the Swedish massage. The Kelly Cardenas Salon offers full salon services for a night out on the town.

You need not step outside the property to dine well, as options are plentiful. Upscale diner Mr. Lucky’s 24/7 has milkshakes so big you’d need someone to share them with, while Culinary Dropout is the perfect spot for pre-concert bites. For date night, Nobu and MB Steak are good choices for carnivores and seafood lovers alike.

The Joint in the Hard Rock is home to some of the best rock shows. To maximize your head-banging experience, check out the VIP packages. They’re worth the splurge to feel like a rock god, even for just one night. 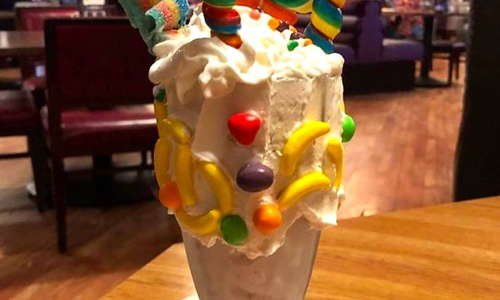 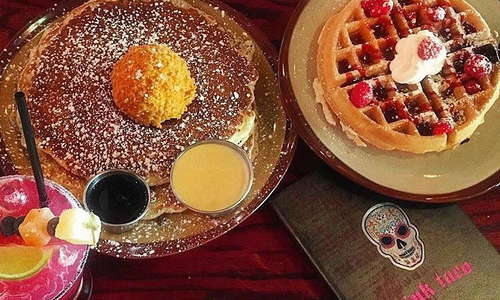 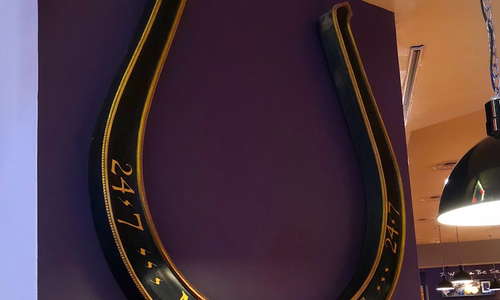 The Center Bar has a sexy new look and provides prime people watching, while SmashBar and Midway Bar give you a good excuse to try out some new cocktails.

YOU SHOULD KNOW The Hard Rock is not on the Strip, so prepare to Uber or take a cab. The traffic in this area is not conducive to pedestrians, and walking a mile to the Boulevard in the summer is tantamount to torture. 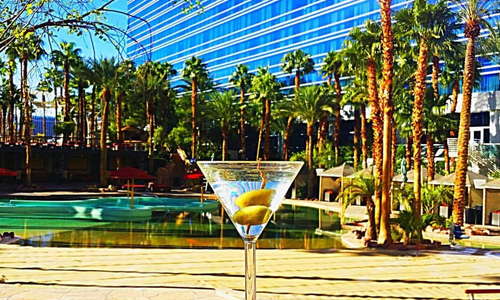 If you’re staying here, it’s best to have a car if you want to spend some time on the Strip. There are restaurants nearby, but the area is busy and not necessarily pedestrian-friendly. Walk with caution.

Another family-owned locals institution, Ellis Island (4-minute drive), is home to cheap drinks and some of the best karaoke in town. Pub 365 (5-minute drive), as its name implies, has a rotating menu of 365 craft beers. It’ll keep you busy for a while.

We love the Hard Rock Hotel for its true rock ‘n’ roll vibe. It makes no apologies for its bad-boy persona, and it delivers everything it promises, from the one-of-a-kind artifacts to the sexy accommodations to the unparalleled entertainment. It’s a fantasy come to life, truly. 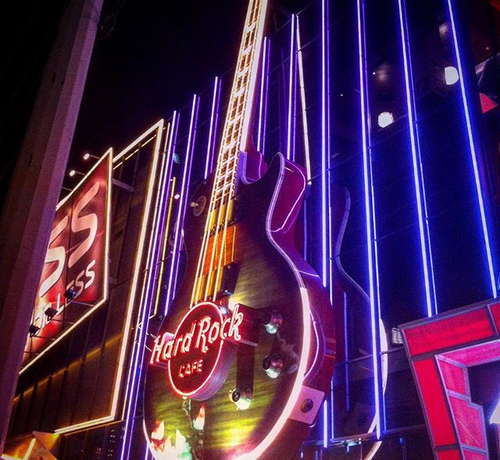 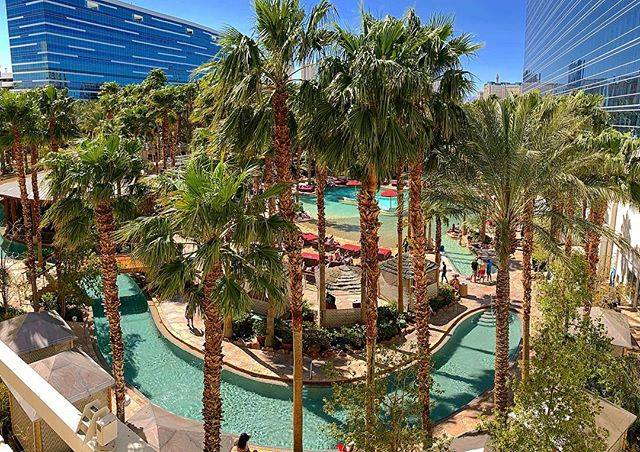 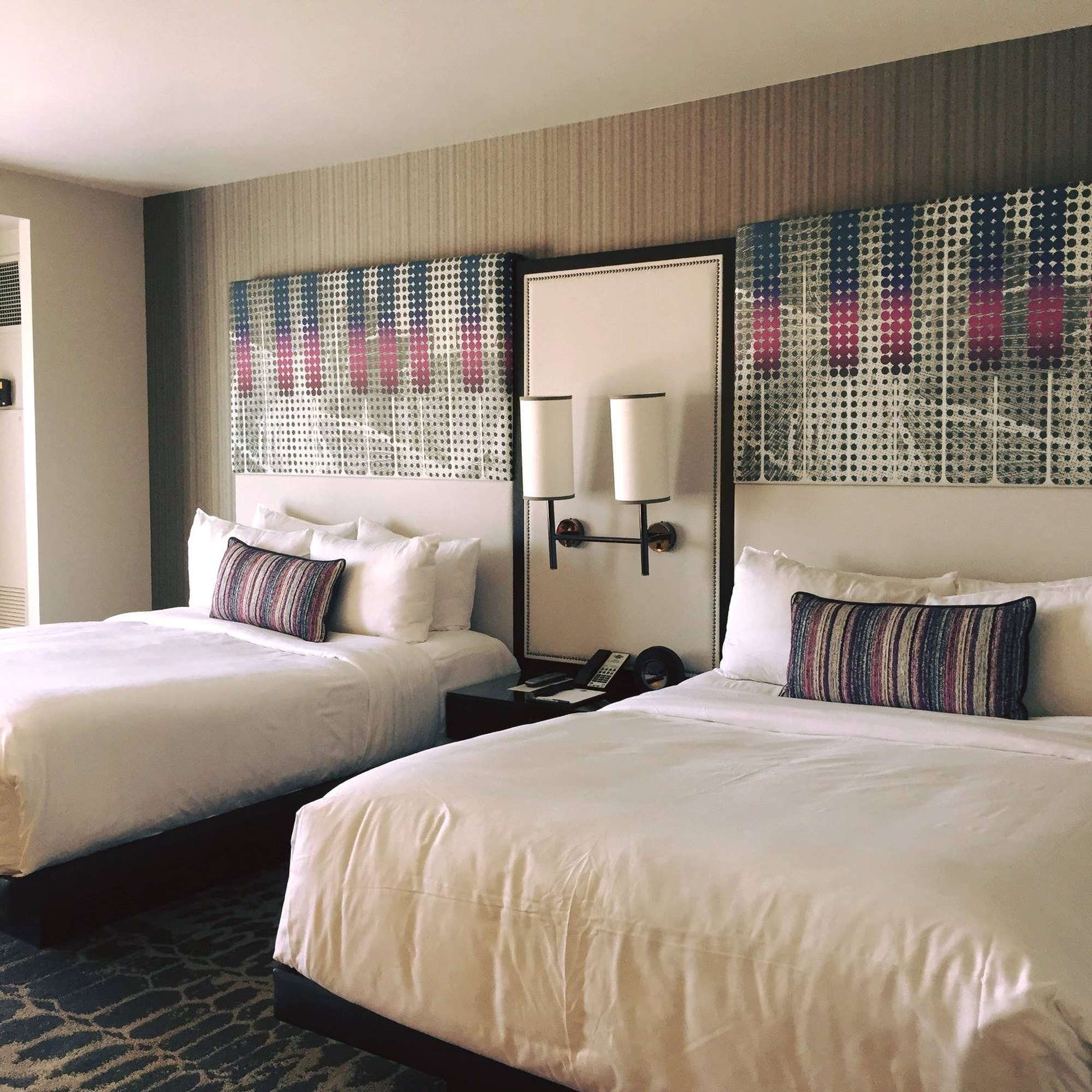 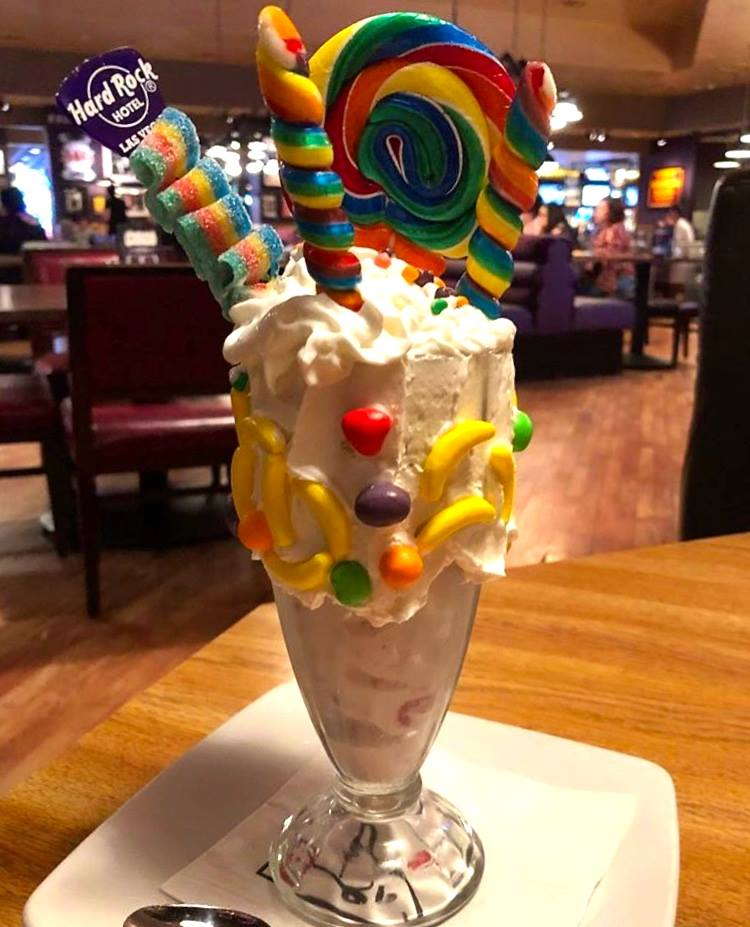 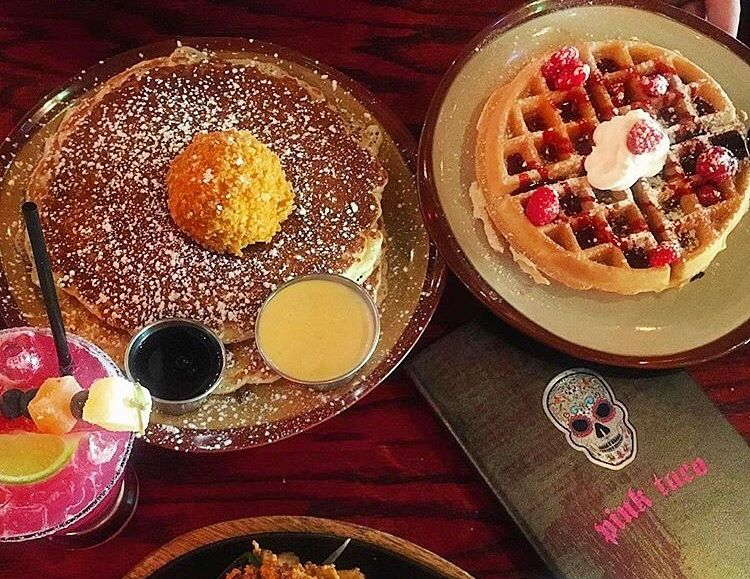 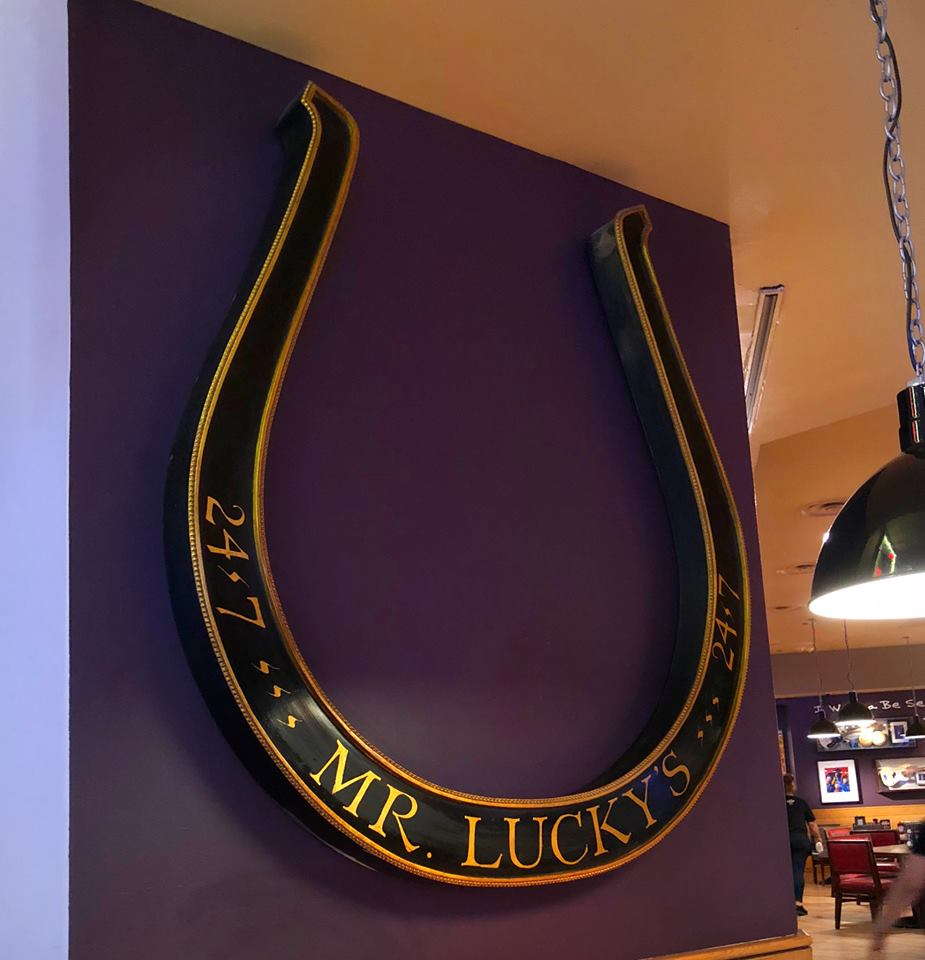 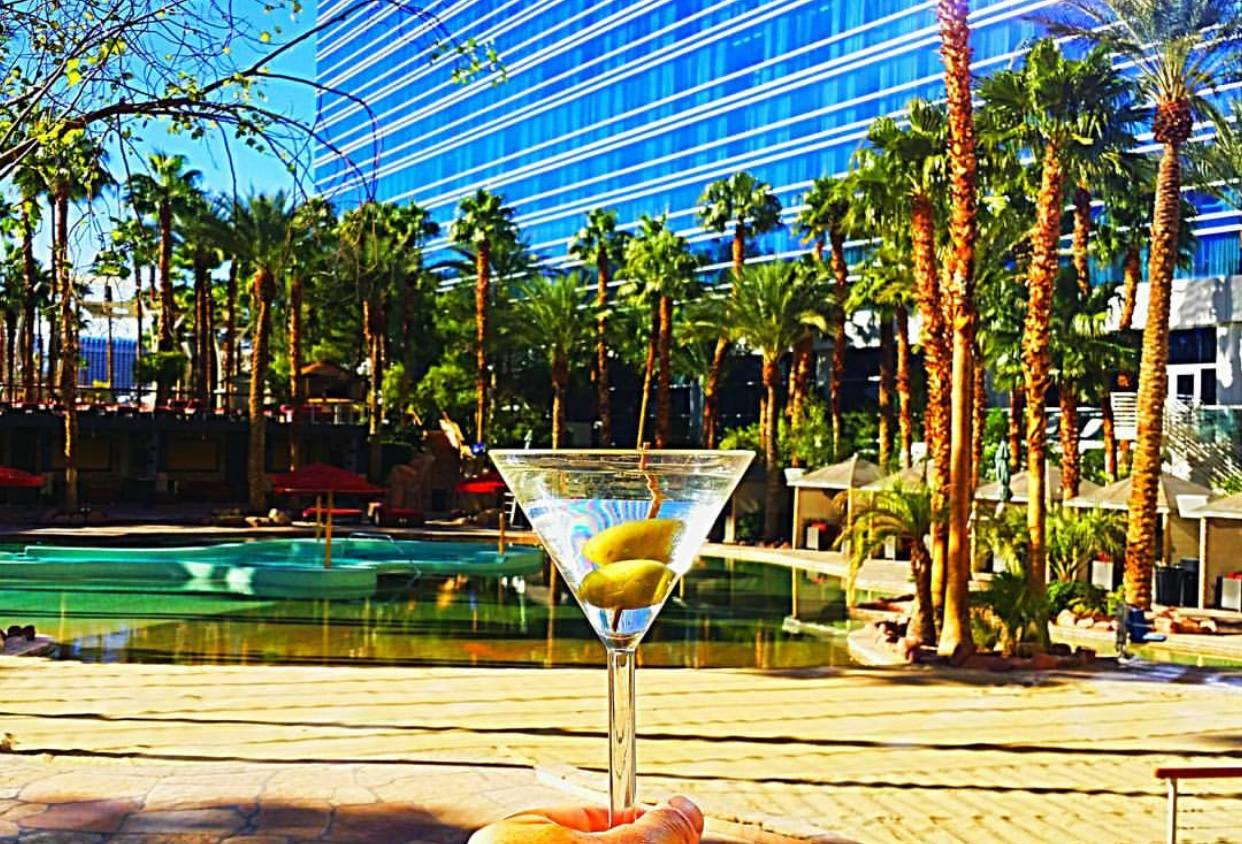