Don’t call it a comeback.

Everybody who’s stepped into Detroit in recent years wants to talk about the resurgence of Motown—we even included it on our 2019 Go List. They want to talk about the urban planning projects, the kitschy boutique hotels, and the artists beautifying streets alongside decades-old dilapidation. It’s the city where American manufacturing was developed and exported for the world to see. Today, while the Fords still roll out of The Rouge, a new type of craftsmanship has begun to take shape across the Motor City: craft cocktails.

From glamorous speakeasies that serve $200 glasses of rum to the Hamtramck dives with $4 rum-punches in shark mugs, Detroit’s cocktail scene has gone from unknown to award-winning. Spurred by a hearty DIY attitude, the D has become a playground for a new generation of artisans, dreaming up otherworldly concoctions, whether it be a Korean-style honkytonk or a tiki bar floating among the icy confines of the Canadian border.

So, stop calling it a comeback and see what’s notable on some of the new—and the old—drink menus around the city. 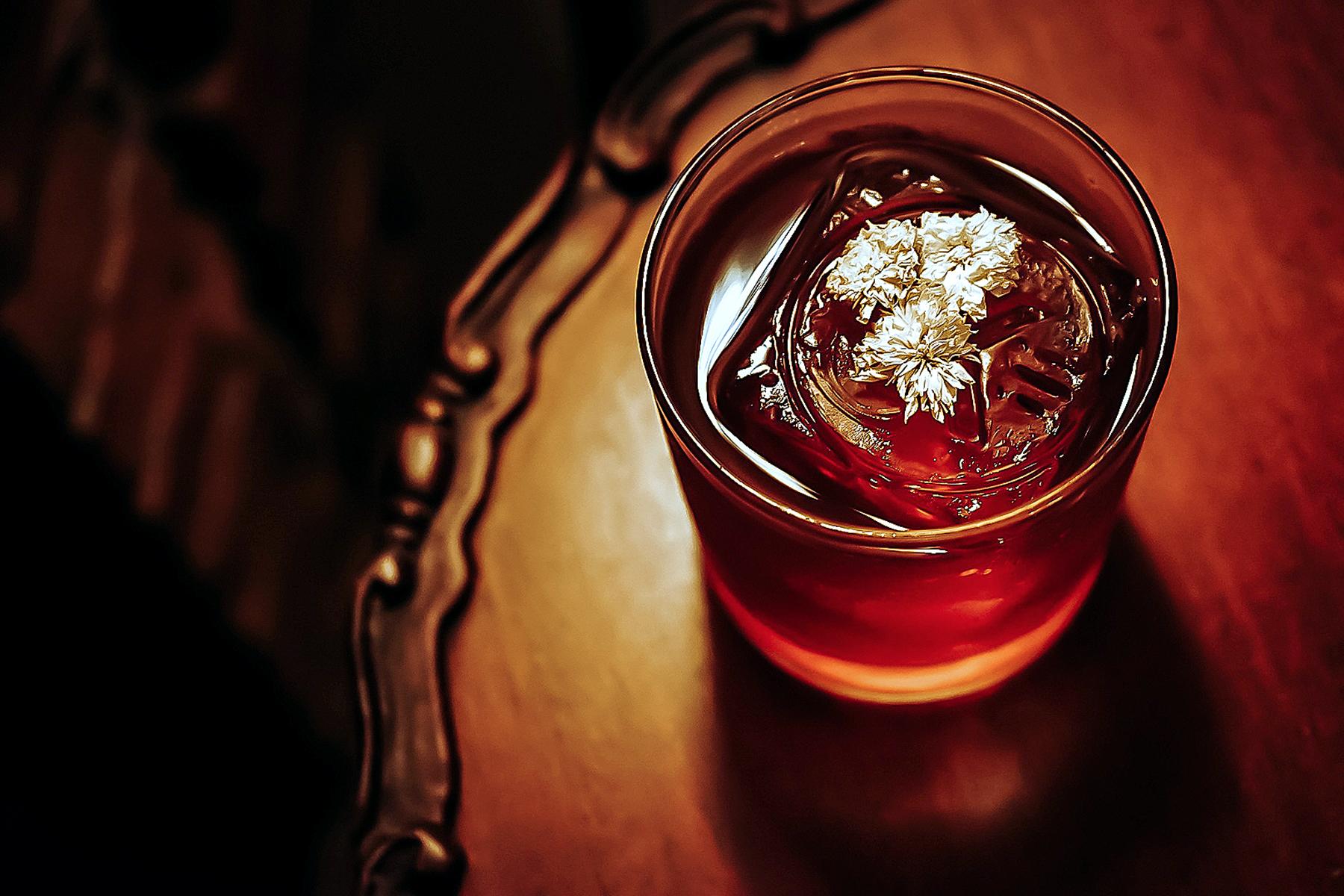 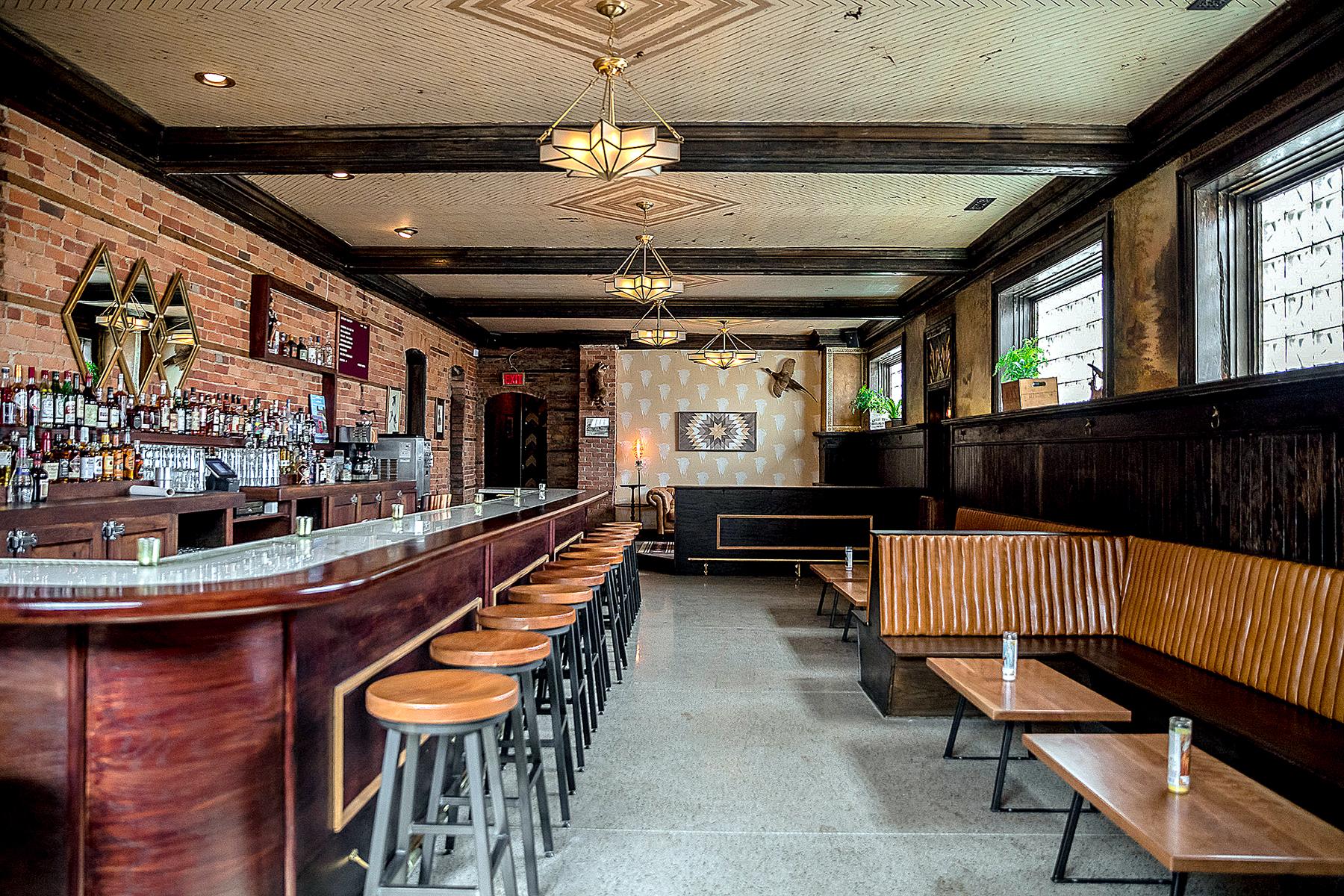 PHOTO: Ashley Davidson/Kiesling
Previous Next
1 OF 15

This new-era neighborhood dive features everything from $12 tumeric-infused mezcal cocktails alongside the requisite dive $5 shot-and-beer specials. It’s the people’s bar; the only problem is finding it. You’ll need to park yourself near Milwaukee Junction and locate the landmark “K” on a shabby brick building just off of East Grand Boulevard. It may not look pretty from the street, but behind that grit is a bit of charm. 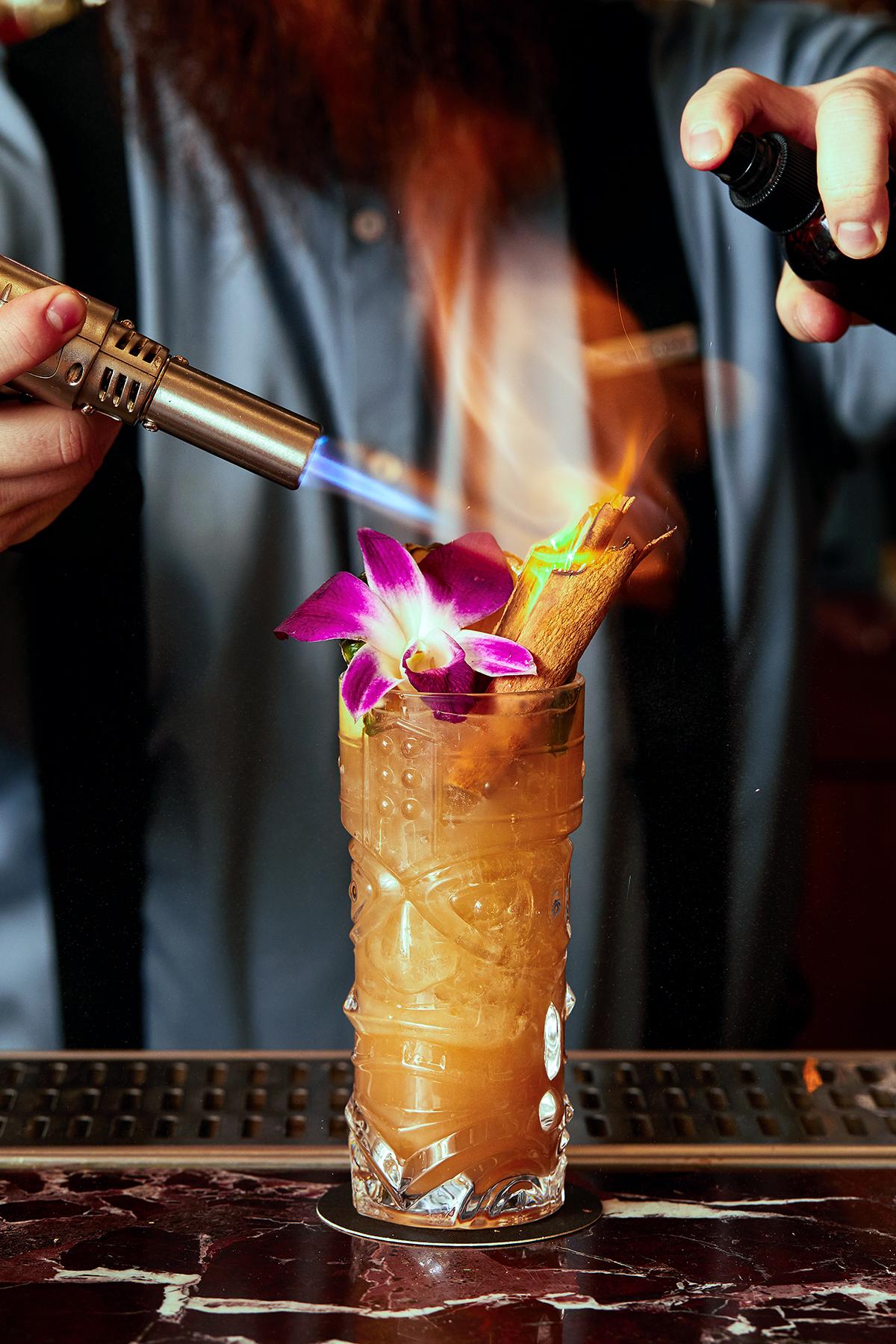 The recently-opened speakeasy inside the Shinola Hotel is the first bar along the up-and-coming Parker’s Alley, a pedestrian walkway named after Thomas Parker, one of Detroit’s first black landowners. Although the bar’s located inside the city’s trendiest new hotel, it was built with Detroit in mind, serving up cutesy cocktails like a Shiver Me Pimms, made from the Shopkeepers Gin at Detroit City Distillery. 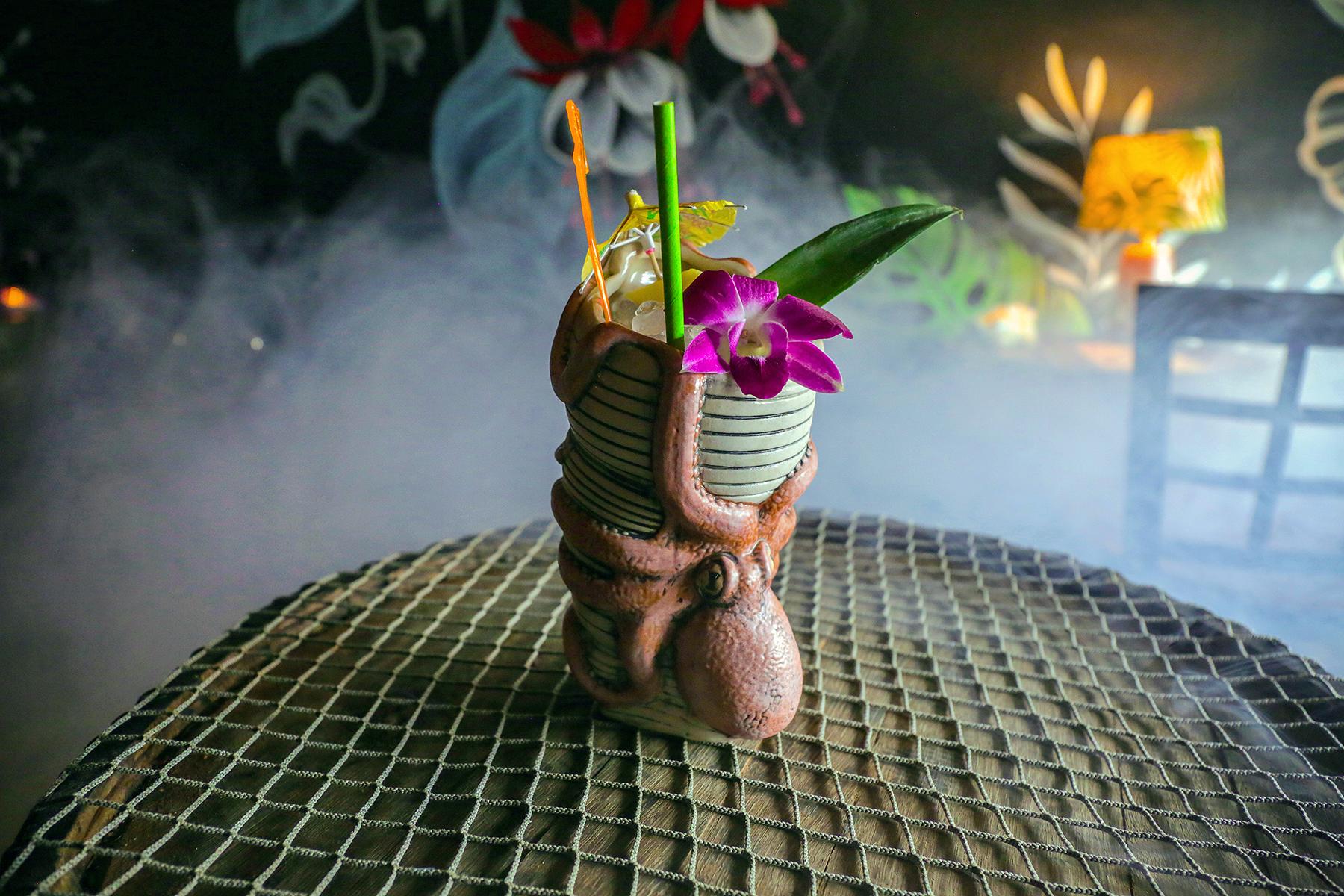 A tropical, rum-tastic tiki is just about the last thing you’d expect way out on the city’s East Side, but this new-wave beachfront is making a splash with their Mai Tais, Singapore Slings, and Wee Bathtubs of Gin. The real delights lie in the kitsch mugs, rotating pop-up restaurants, and the shark bowls of $4 house punch—a real tidal wave of booze. 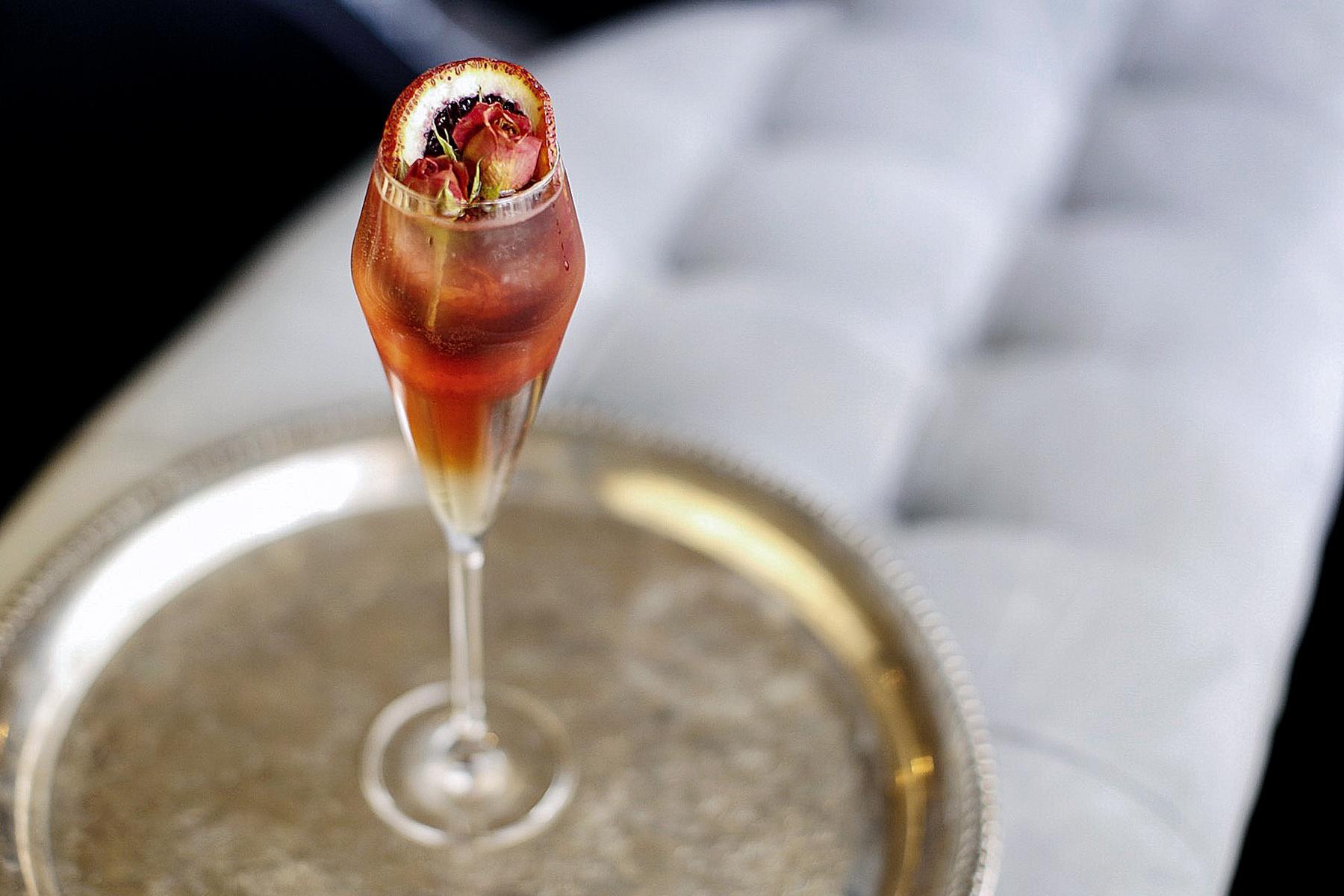 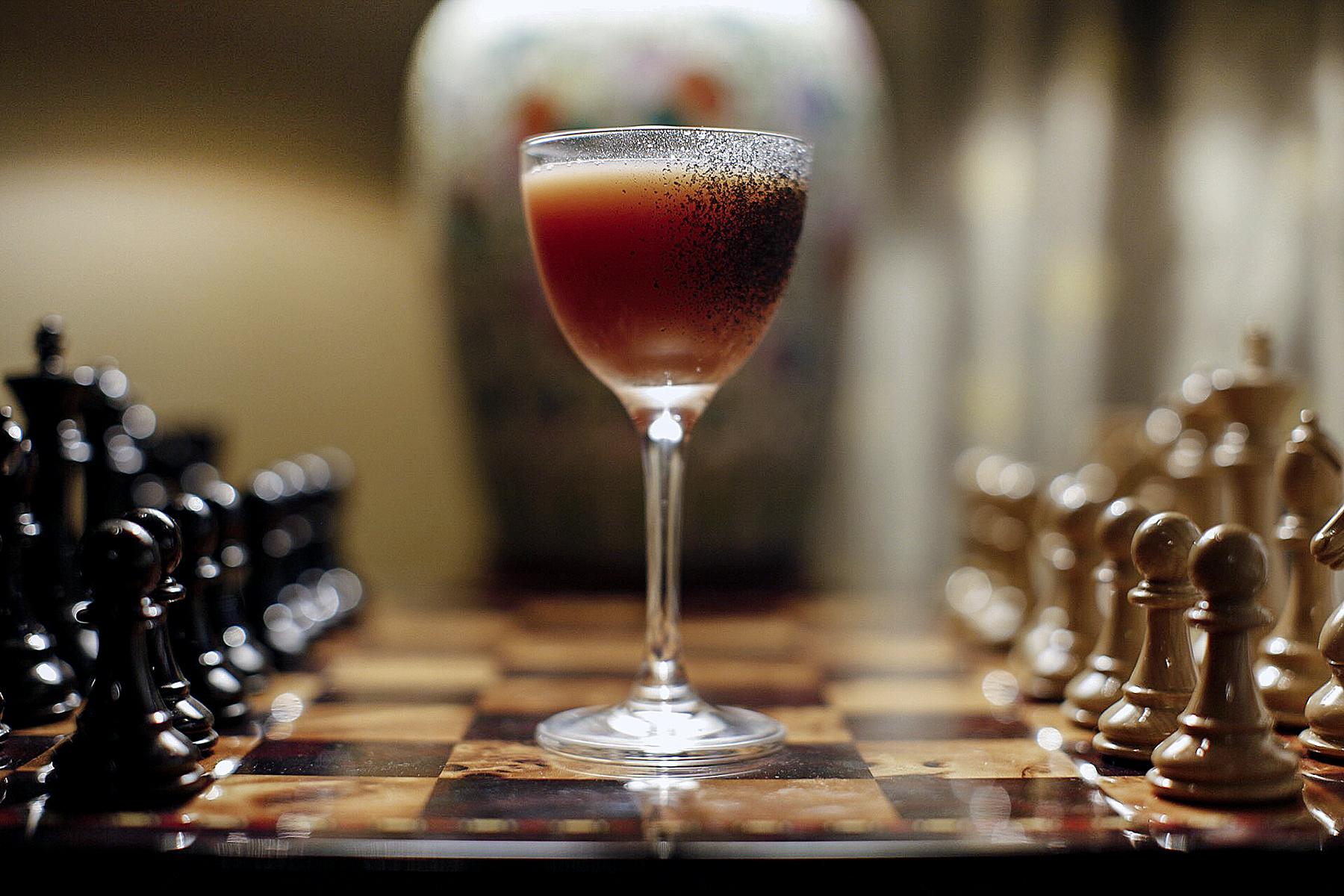 The Library at Detroit Club

It’s the club that “built Detroit,” and, after decades in dereliction, Detroit Club has reopened with a secret twist–The Library, a classy cocktail lounge serving up innovative and inimitable classics amid scenes of Detroit’s former glory. Their cocktails are imaginative fusions of the modern and traditional, like Japanese whiskey with sesame oil or sparkling vodka with aloe lavender black pepper syrup. It’s a nod to today’s tastes and an ode to when Detroit was America’s city of riches. 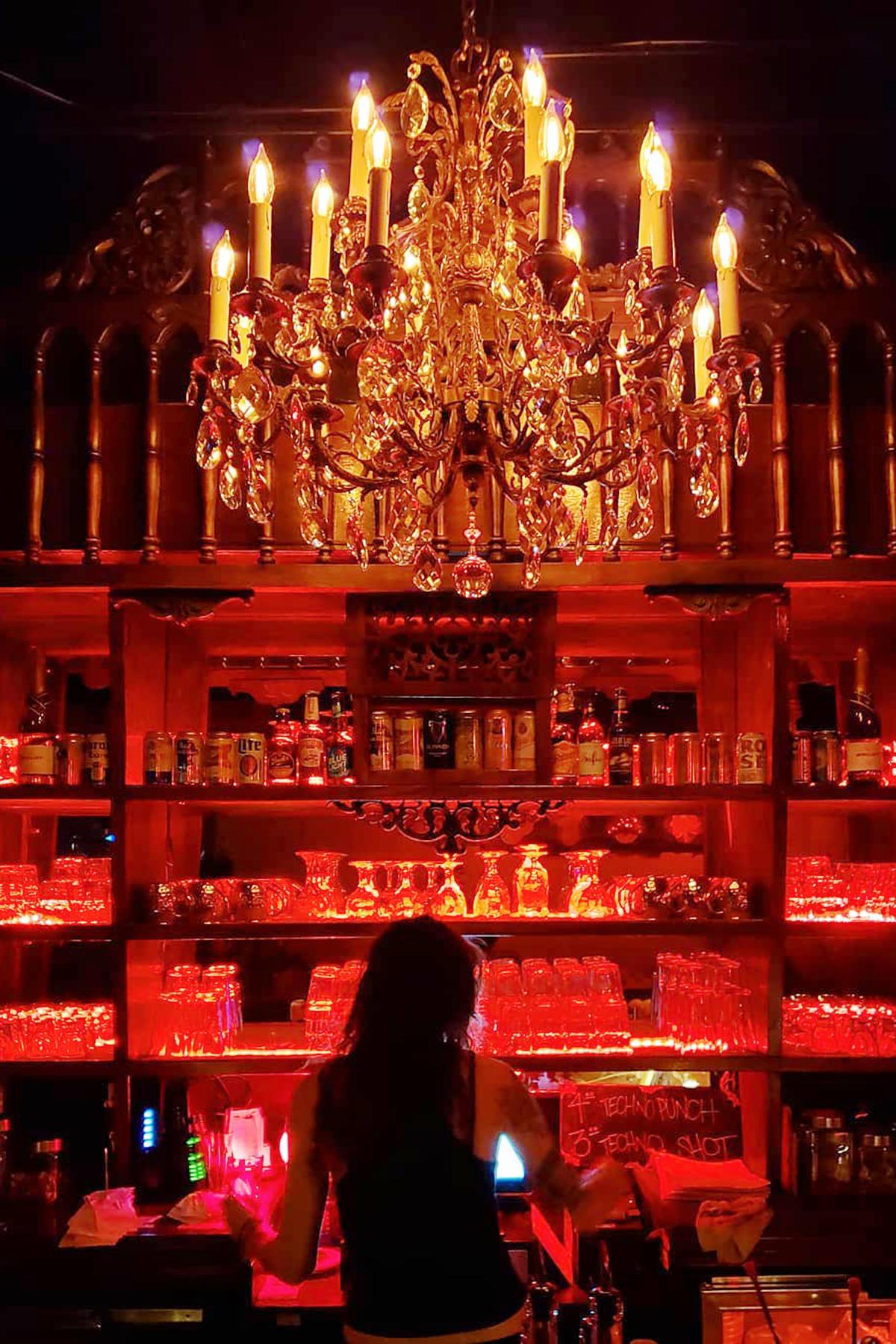 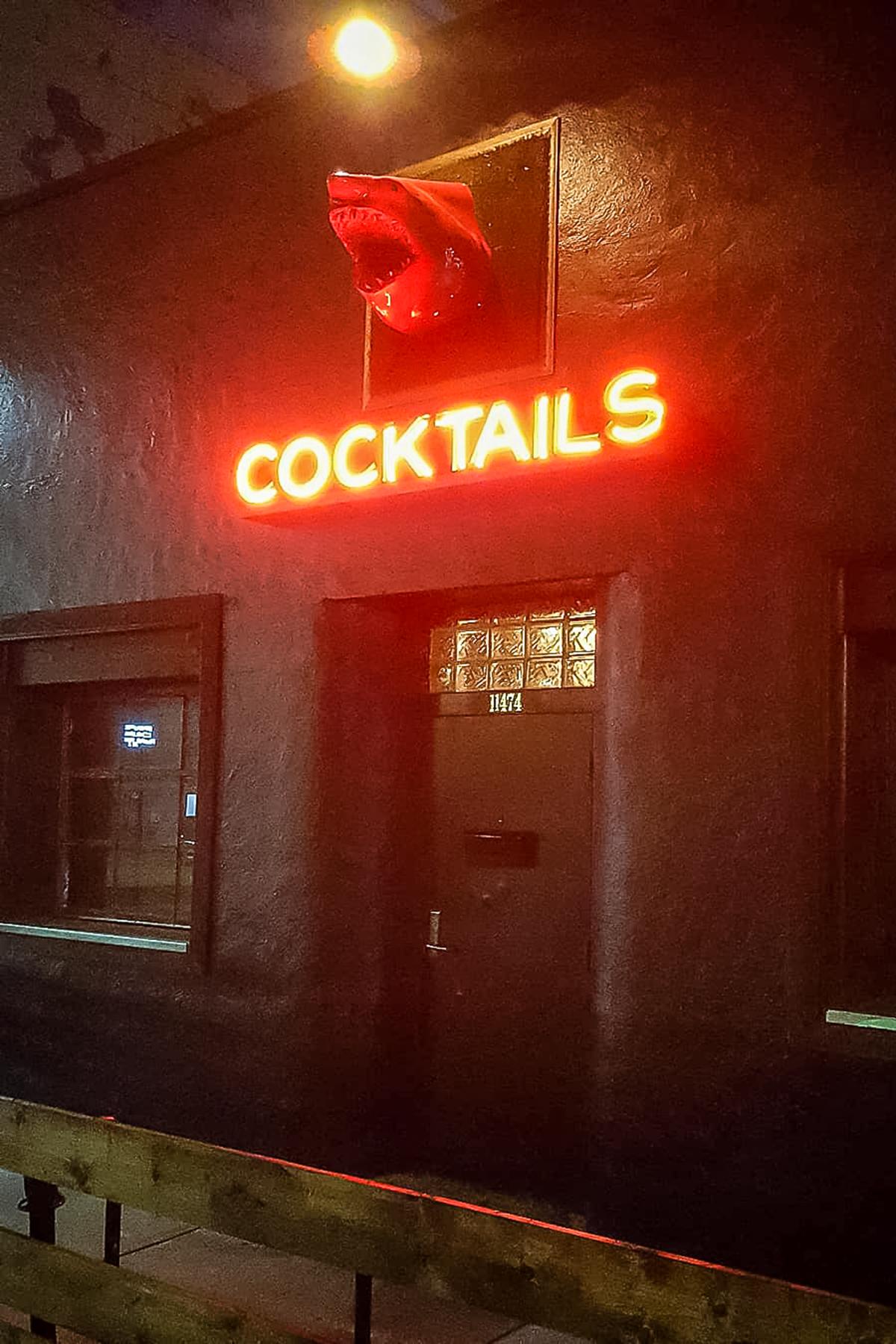 PHOTO: The High Dive/Instagram
Previous Next
5 OF 15 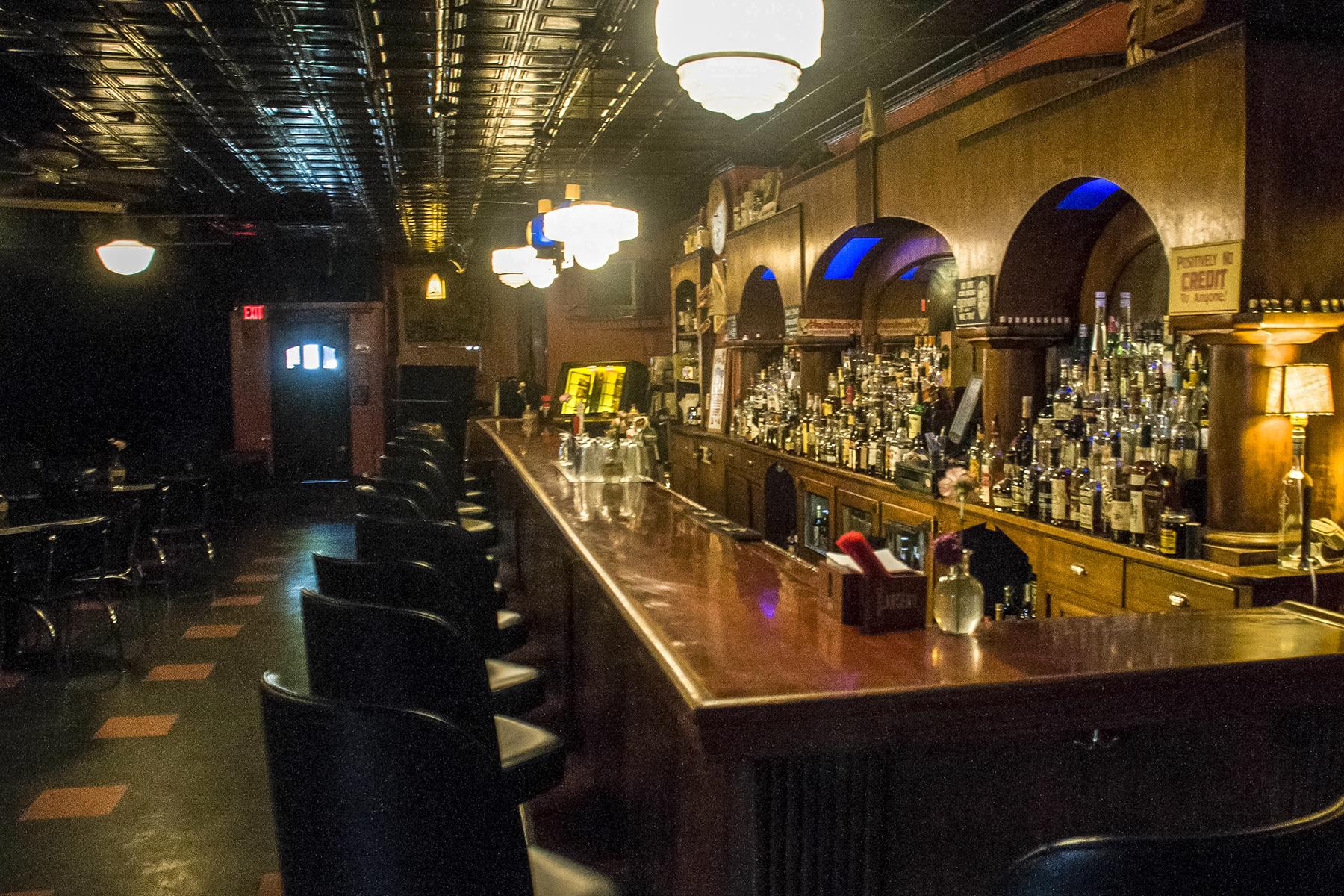 Set to the soundtrack of Bad Brains and ‘80s hardcore punk, this Hamtramck hole is a celebration of the rugged Detroit that produced the likes of The Stooges, Iggy Pop, and MC5. Oh, and it’s also arguably the best bourbon bar in the city, offering somewhere around 100 different bourbons  (not including the other whiskeys). Try Lili’s Valium, a cocktail made from six different liquors, if you want a mysterious elixir. Or, just have a glass of Kentucky Owl; it’s what the regulars would do. 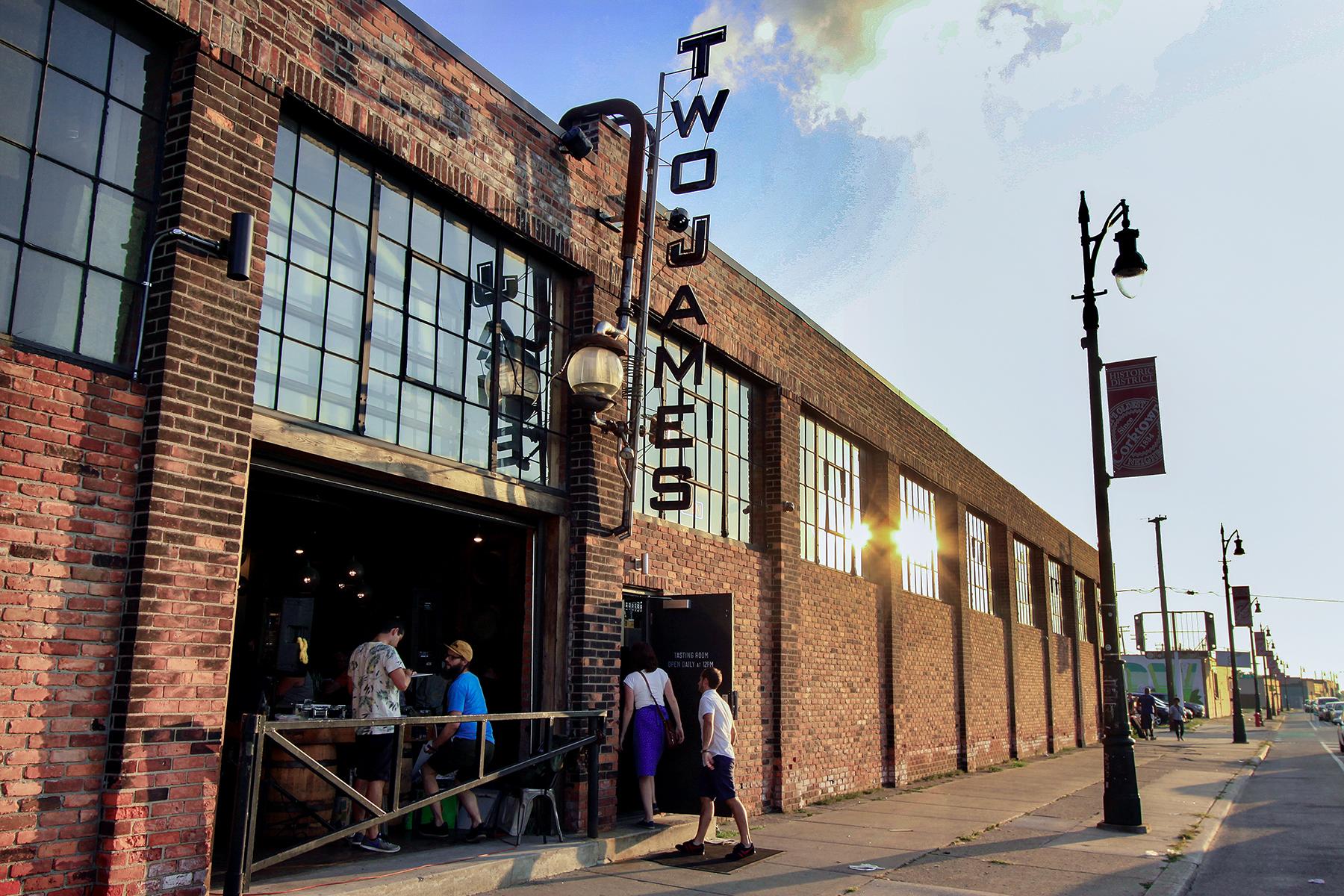 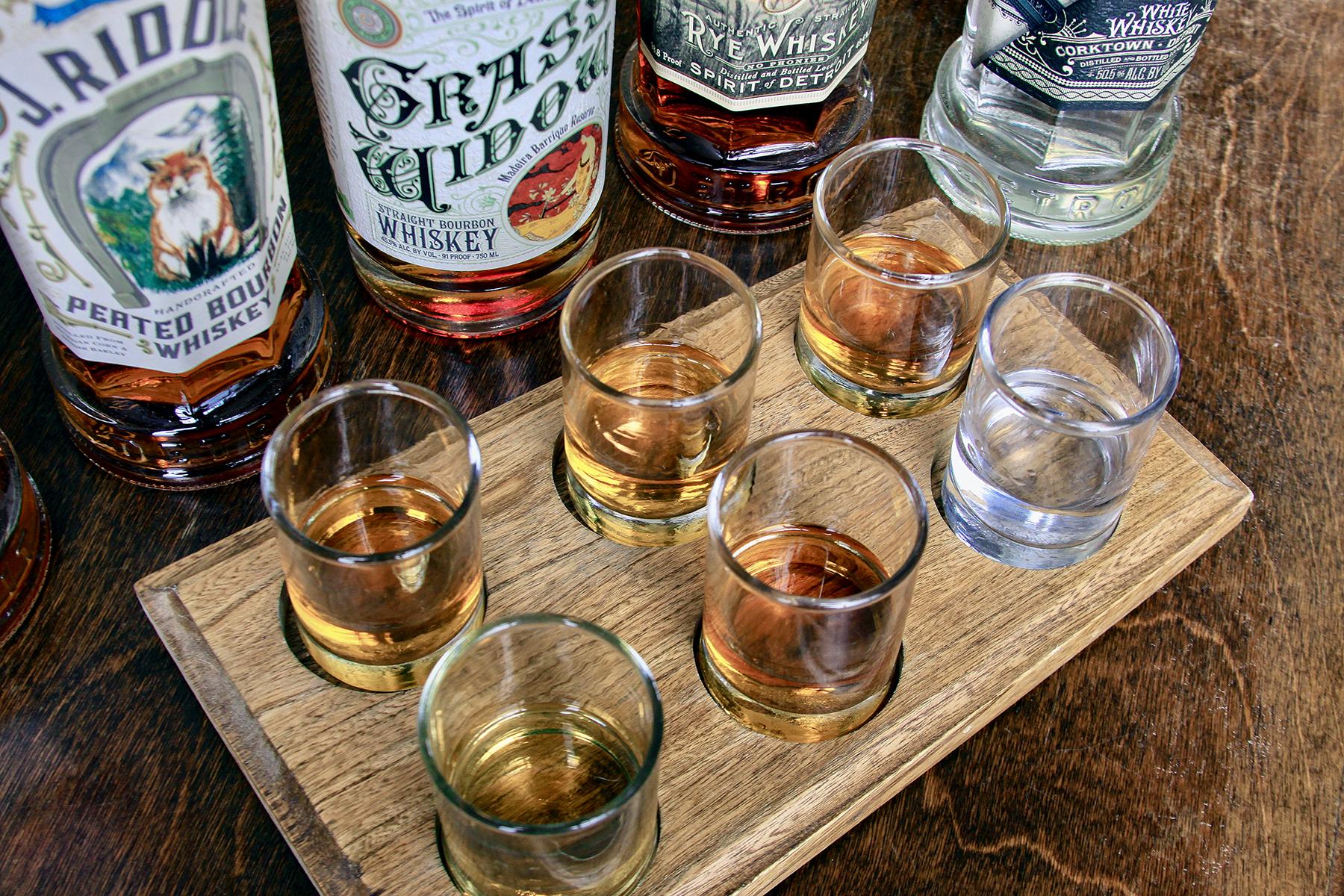 PHOTO: Two James
Previous Next
7 OF 15

This old Prohibition-era distillery is introducing old Detroit tastes to a new generation of taste-buds. Seasonal libations like the Dr. Strangelove made from their handcrafted Dr. Bird Rum or the deadly Springtime for Hoffa, complete with J. Riddle Peated Bourbon and black currant jam, prove that this place is more than just delicious bathtub booze. 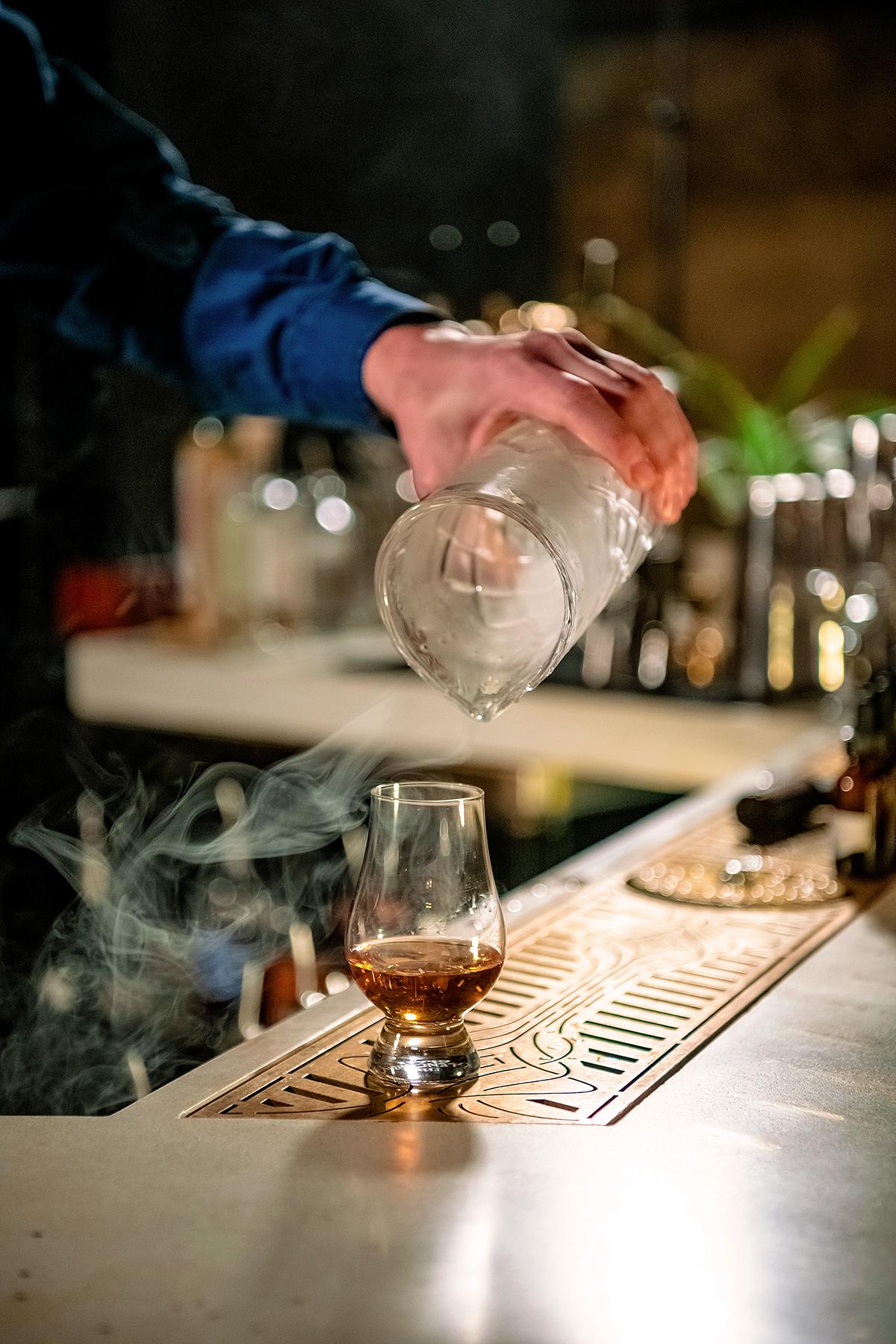 Fragrance shop by day and an 18-seat cocktail (and mocktail) bar by night, Castalia fuses the world of Sfumato perfume with an array of tastes, scents, and textures. The sensorial experience is guided by the house-made aromas, where scents like “Survival Instinct” are paired with black licorice, Reposado tequila, gentian liqueur, sweet, vermouth, and absinthe. It’s entirely an olfactory amuse-bouche in which everything from the glasses to the napkins dons a unique essence. 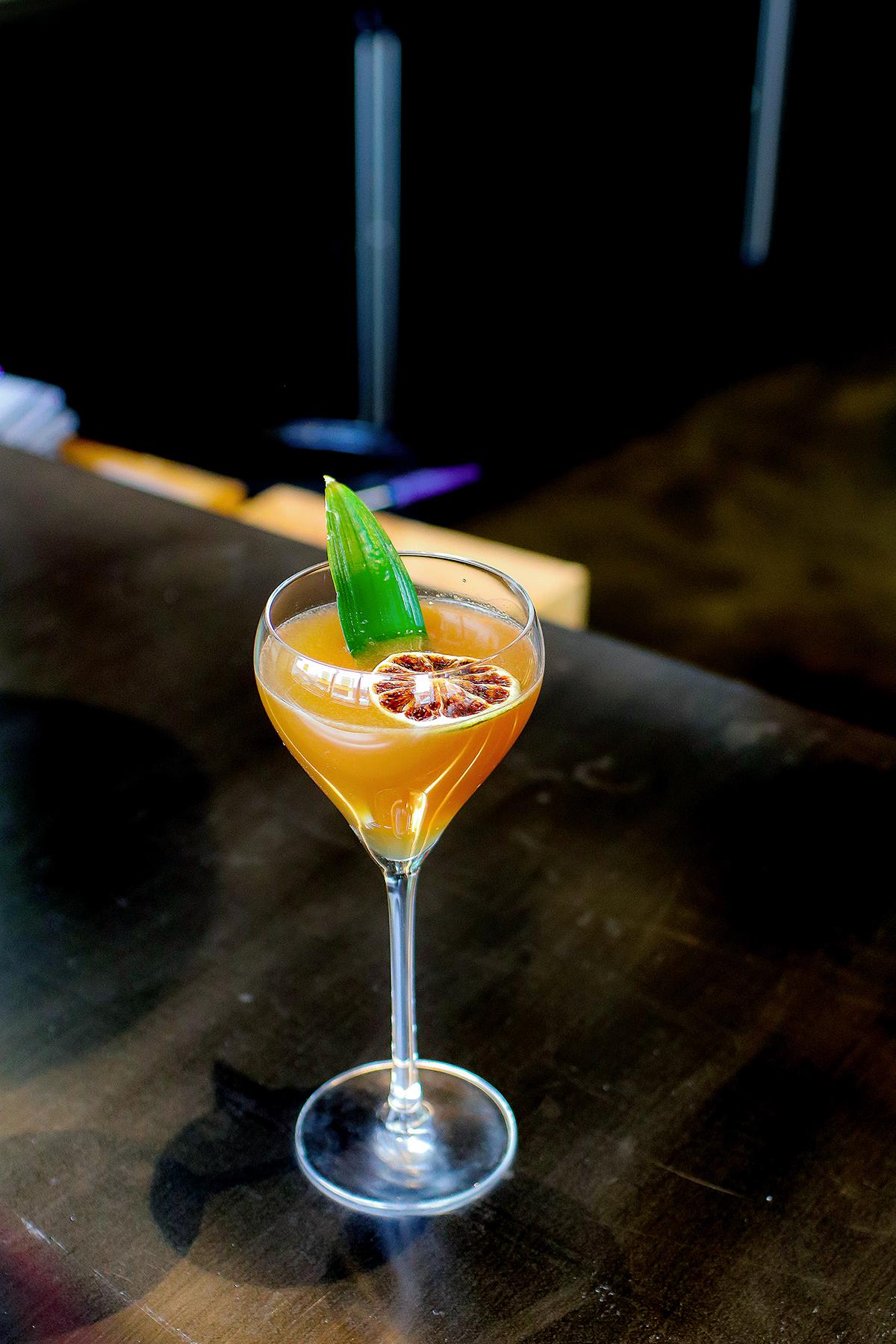 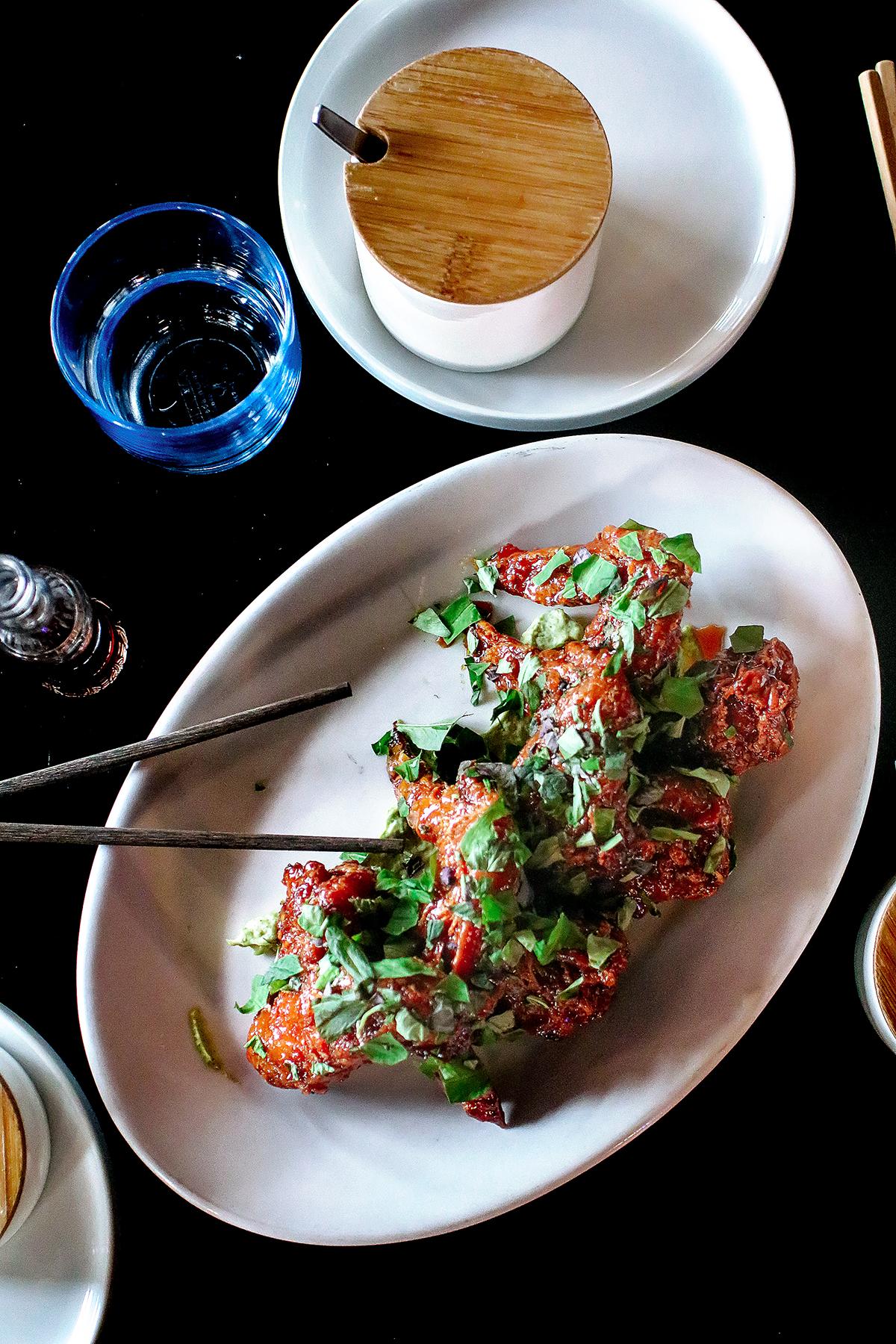 PHOTO: Flowers of Vietnam
Previous Next
9 OF 15

It may look like an old Coney Island on a humdrum street in Mexico Town, but the tavern at Flowers of Vietnam is serving up some robust Southeast Asian flavors—along with their award-winning dishes. Beverages like Fear of the Lime, a spiced rum cocktail with pistachio coconut orgeat, or a boozy rendition of traditional Vietnamese egg coffee will quickly convince you to order up some Caramel Chicken Wings while you wait for your second glass. 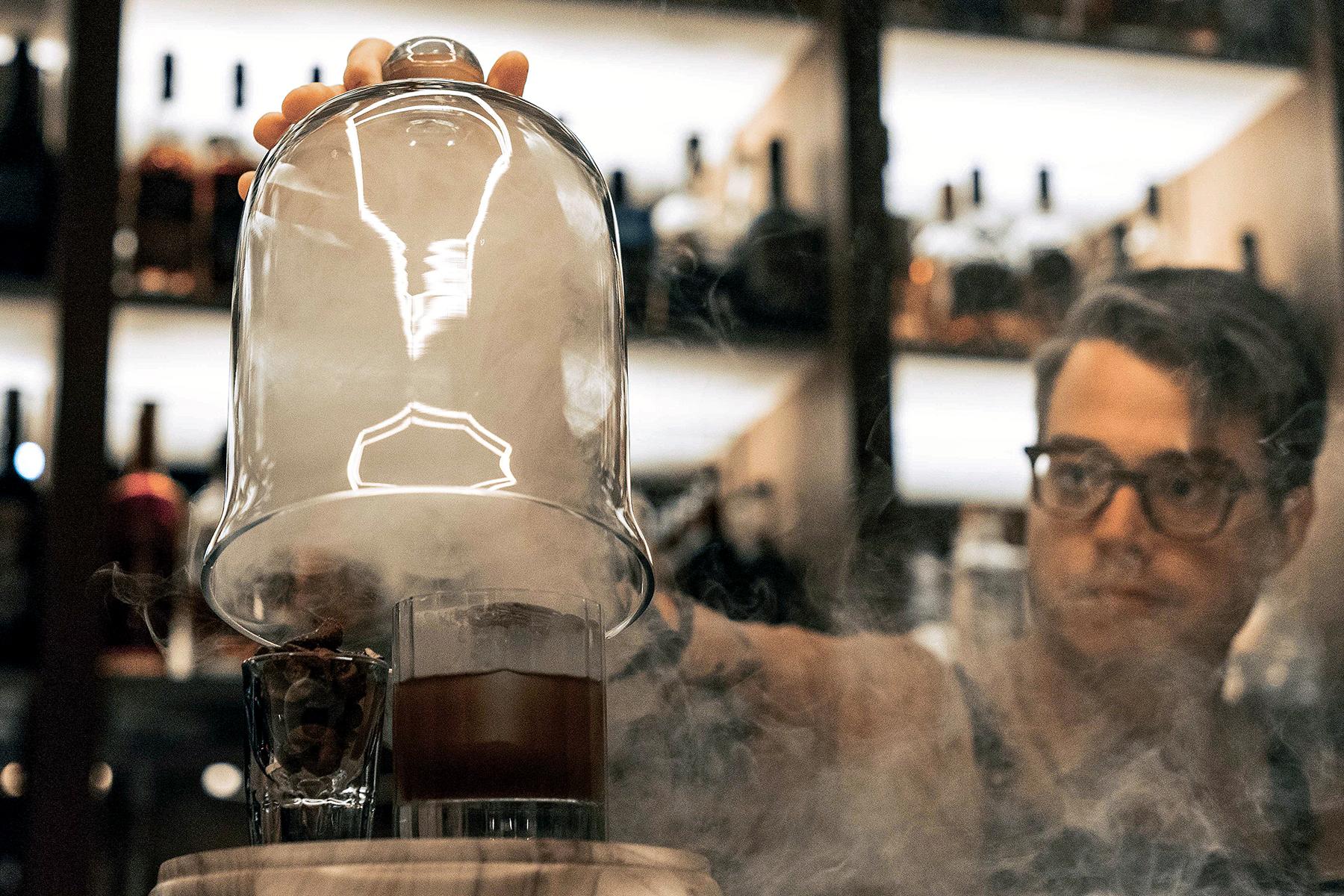 The Admiral is first on the menu at Detroit’s Bad Luck Bar. It costs $200 and consists only of rum. It just so happens that rum is from the British Royal Navy’s 1953 vintage supply. Bad Luck Bar, a hidden speakeasy on a nondescript alleyway just off Griswold Street, is all about the experimental. Evenings begin with an amuse-bouche—like hot gin, cinnamon, and lemon—and continue with hand-crafted potions like The Alchemist, a synergy of Reyka vodka with champagne strawberry shrub and a homemade black tea-dried fruit soda. 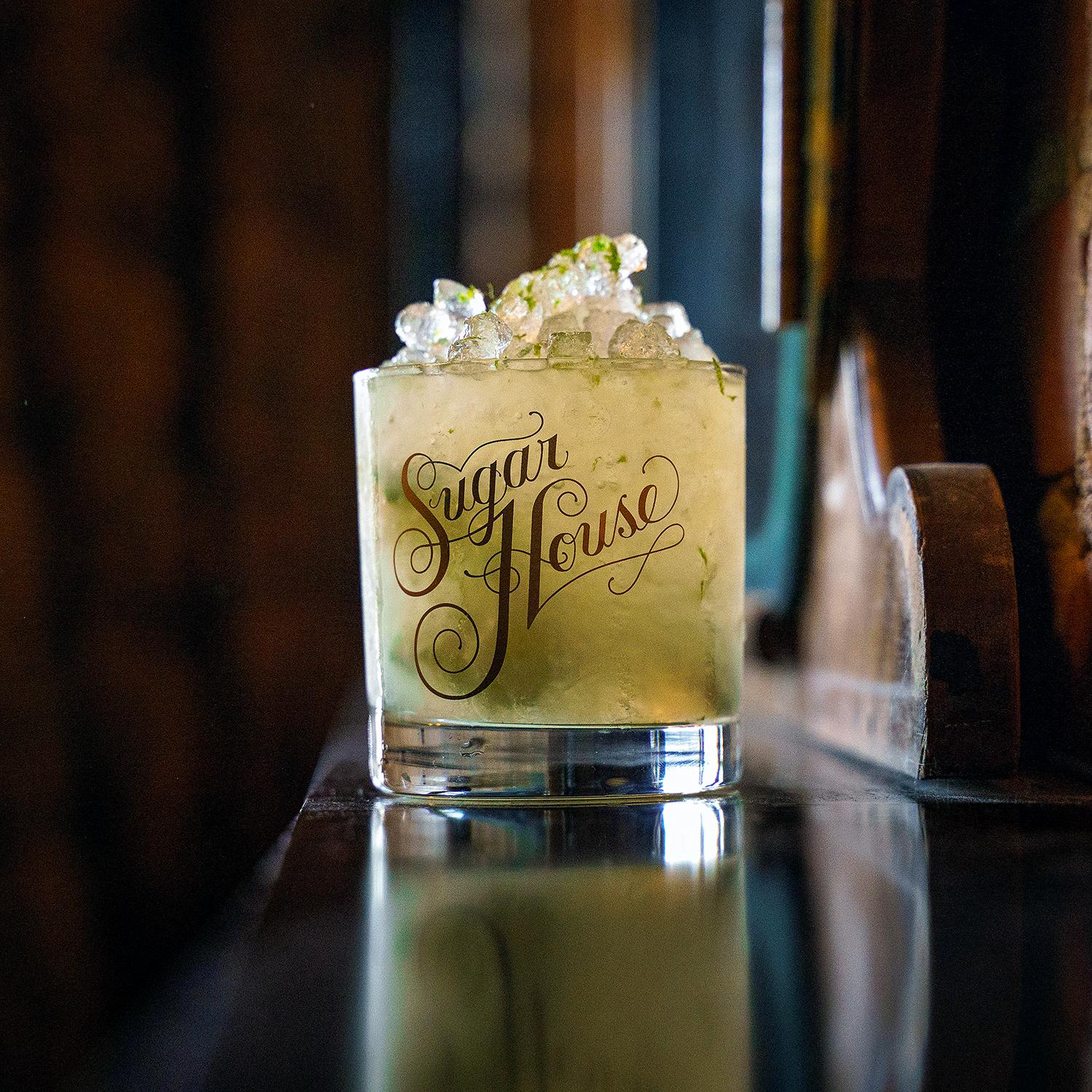 Long considered to be one of the best bars in the country, The Sugar House is the bar that started the Detroit cocktail revolution. The Corktown haunt features 101 Prohibition-inspired drinks, including staples like the Old Fashioned or straight rye, along with eclectic offerings like liquors infused with candy-cap mushroom syrup. Prices start at $8 per drink, but it can lead to an empty wallet if you’re not careful. 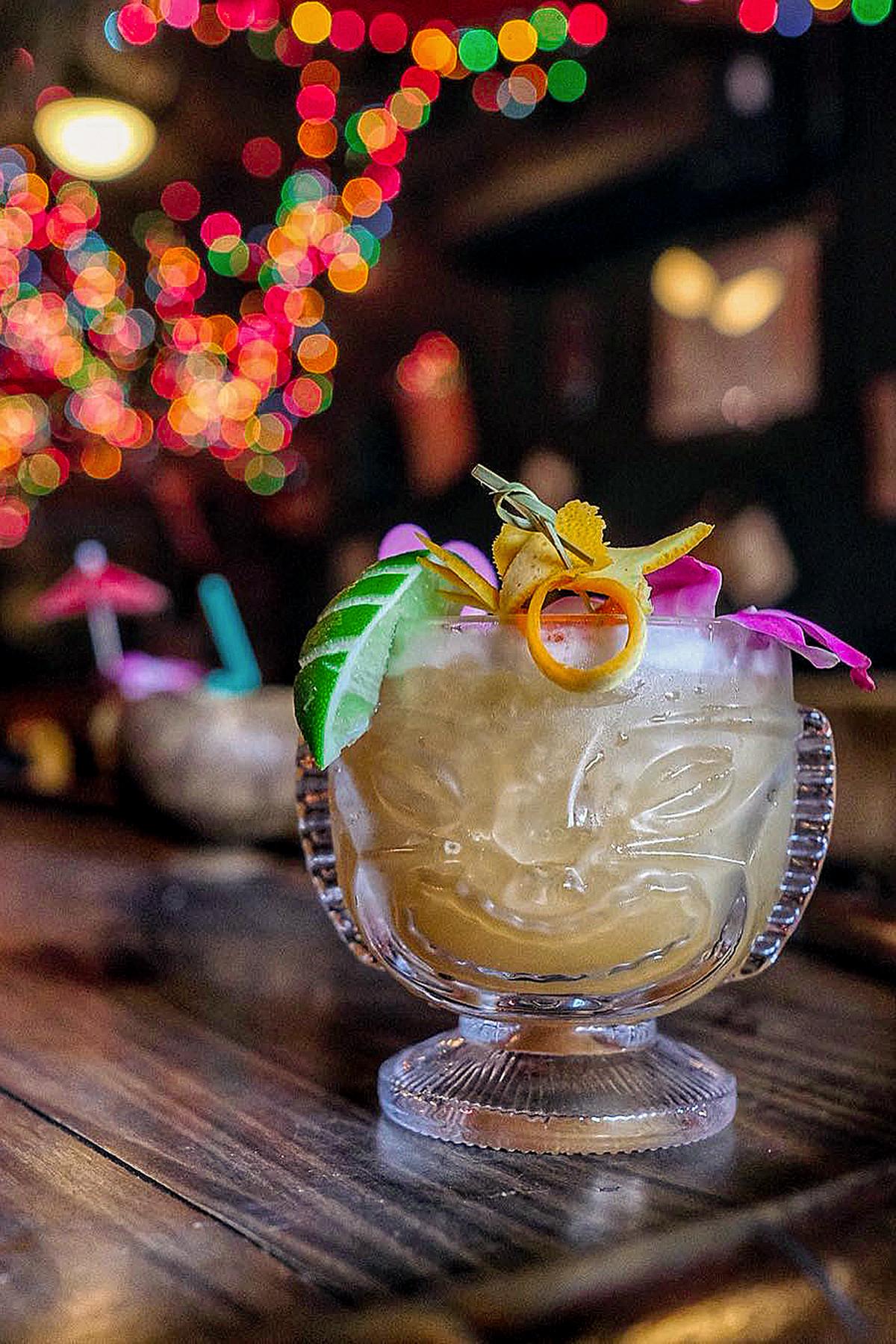 Hardly noticeable beyond the “M”-and-dagger flag draped above the front door, but, inside this Southwest dive, you’re immediately transported to a Hawaiian bizarro world with tropical cocktails, Scorpion Bowls, and that one table screeching along to Lauryn Hill’s “Doo-Wop (That Thing).” Drinks are strong, the staff is more than accommodating, and the beach vibes are on point (even in the dead of winter). 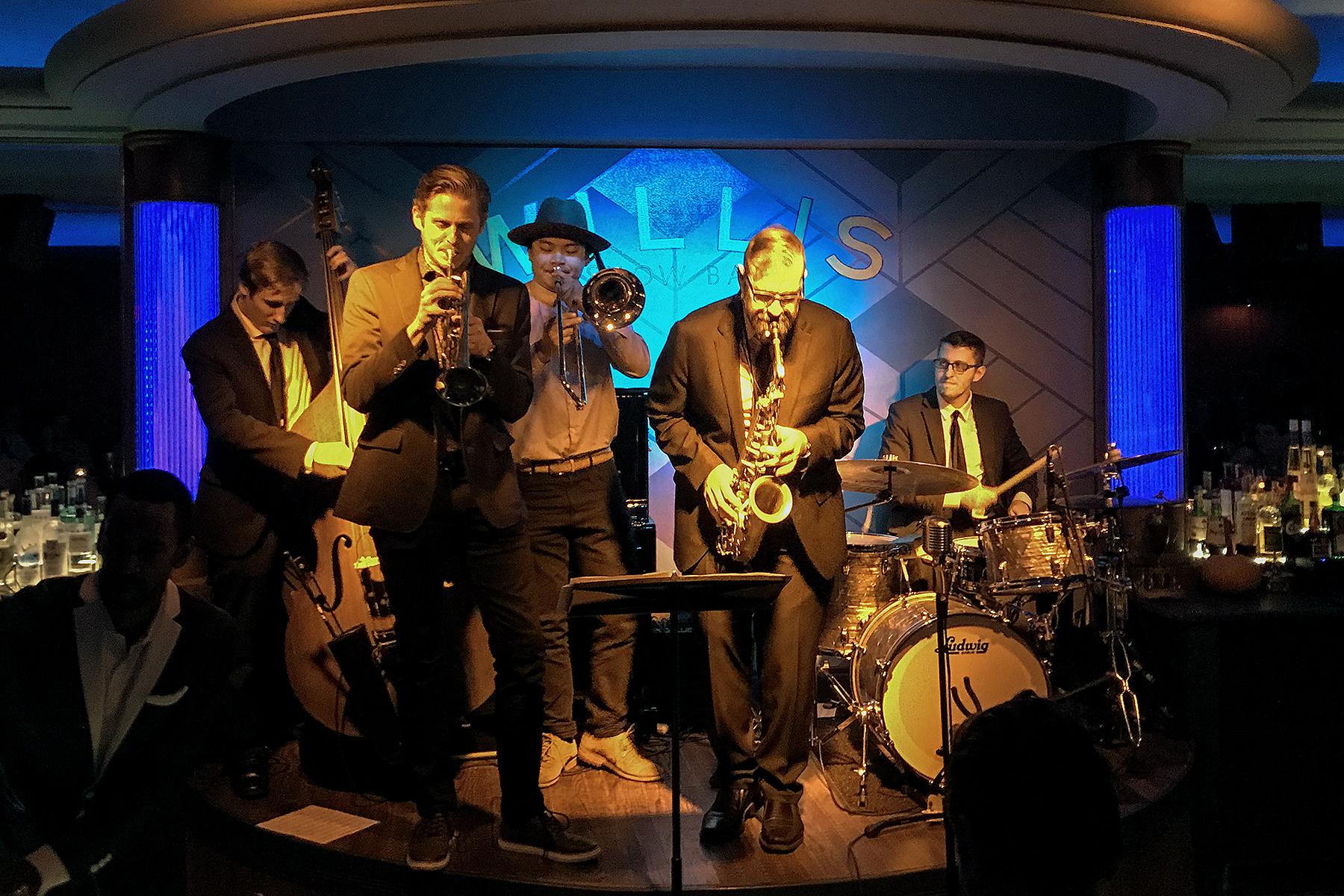 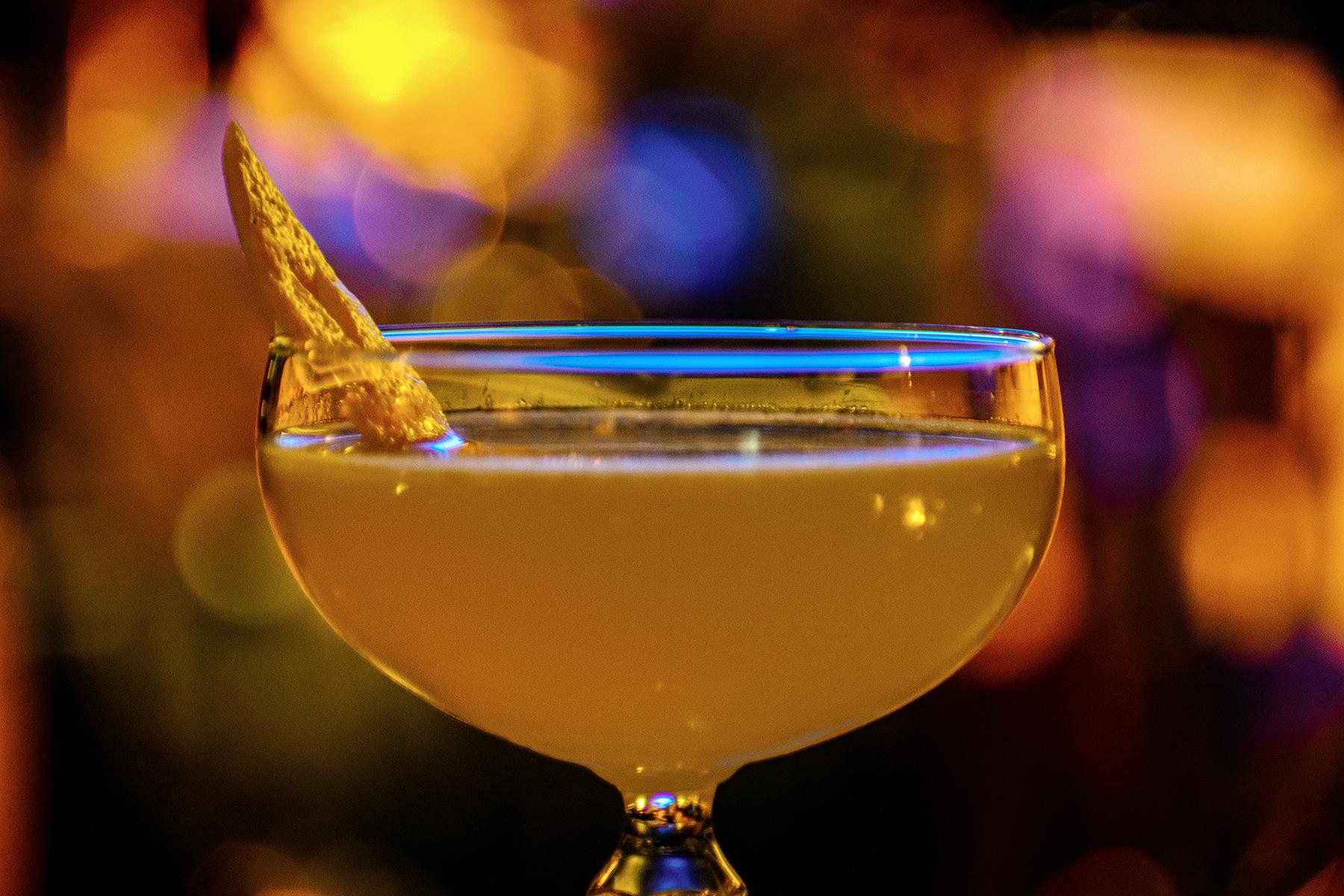 PHOTO: Mutiny Bar/Instagram
Previous Next
13 OF 15

If you’ve ever wanted to experience Detroit’s Gilded Age, it still lives at Willis Show Bar. Originally open from 1949-1978, this newly-renovated upscale cabaret is bringing music, burlesque, and cocktails back to the Cass Corridor. Performances run just about every night and typically feature local jazz musicians and burlesque performers. It’s a scene straight out of old Detroit glitz and hopefully a glimpse of riches on the horizon. 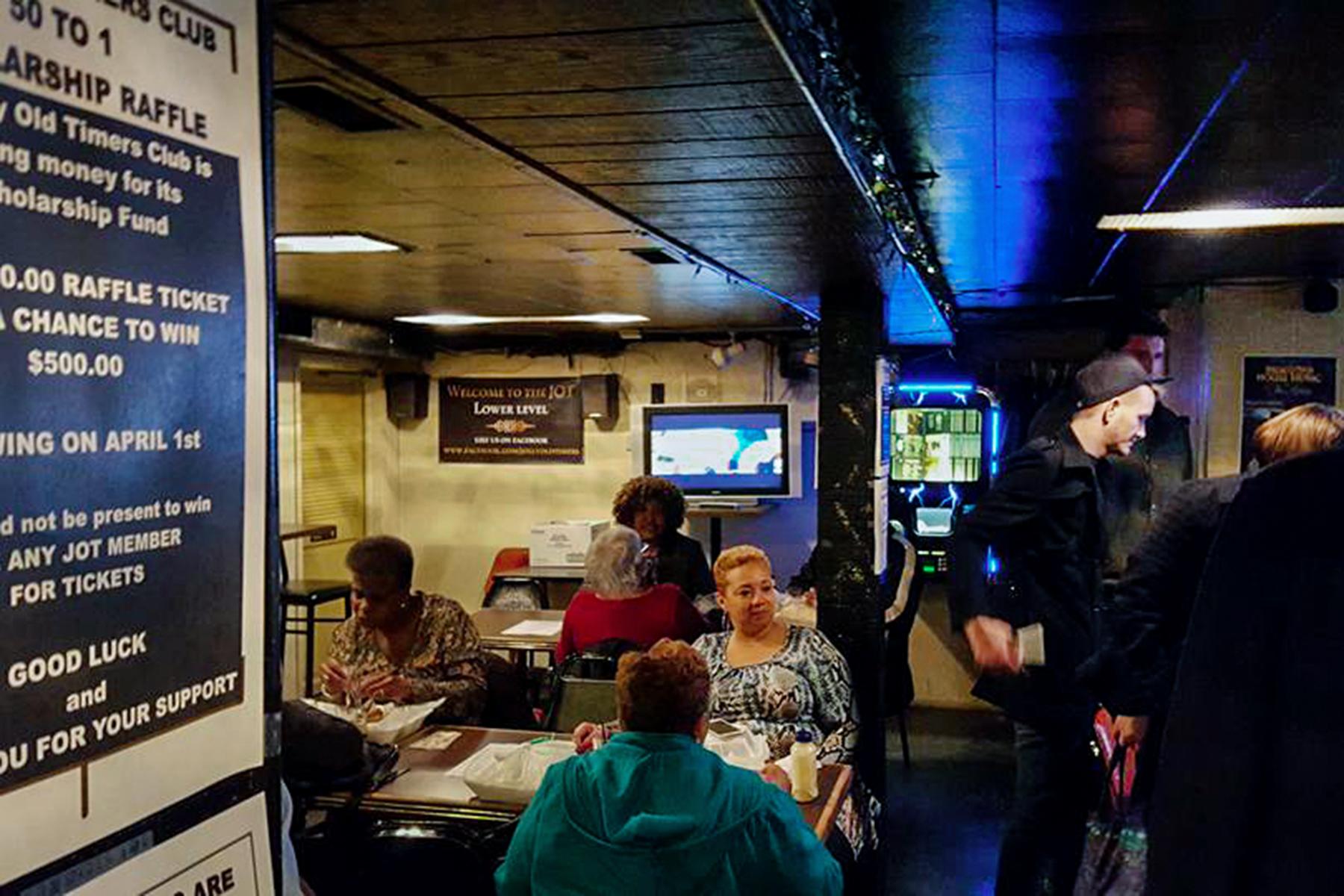 Located in the basement of a nondescript Victorian house in Midtown, Jolly Old Timers is an old black social club that specializes in cheap, heavy-pour tipples, delicious hot wings, and a familial atmosphere that keeps you there hours longer than planned. Unlike most speakeasy-style bars, Jolly Old Timers is less like walking into the roaring ’20s and more like walking into grandma’s ’70s-style basement, where you may not know anybody’s name upon entering, but you’ll leave with a few friends, a BBQ sauce recipe, and plans to meet up next month.

What’s better than antiques, a few drinks, an unnecessarily loud jazz band, and grilled cheese sandwiches? That’s basically what you’ll get at Cafe d’Mongo’s, a closet full of chaos. The beloved bar—even by the likes of celebrities like Ryan Gosling—is as authentically “Detroit” as it gets, so sit back and enjoy a Detroit Brown and a grilled cheese, and succumb to a night of controlled debauchery.