The Mystic Krewe of Barkus took over New Orleans’ French Quarter this weekend for the 28th annual all-dog party.

On February 16th, at 2 p.m., the French Quarter came alive with the sound of joyous dogs… plus a few brass bands, the clinking of champagne toasts, and of leashes against collars.

The Mystic Krewe of Barkus is the annual Mardi Gras parade dedicated to man’s best friend. And, this year, more than 500 hundred dogs participated, with hundreds more on the sidelines of a 15-block loop through the city’s historic French Quarter.

The Krewe of Barkus was first established in 1992, when a group of neighbors gathered at a bar, had a few beers, and lamented that there wasn’t enough for their pups to do during Mardi Gras. They set out the next year to change that, hosting a small, neighborhood dog parade. They elected Jo Jo McWood as Queen Barkus the First. Scott Freeman’s dog Jager was selected as King Barkus the First, and costumes were required. The parade has grown since that first tiny bar meeting. A Royal Court and a theme are announced each year. The Mystic Krewe, which is a non-profit foundation, has raised more than $1 million for animal charities.

Celebrating its 28th year, the march down St. Ann Street commenced with a theme of Bark to the Future: Barkus Returns to the ’80s. Here are some of the best moments of Barkus 2020––from Chihuahuas riding in Dogloreans to a Mississippi Collie’s vertical frisbee skills. 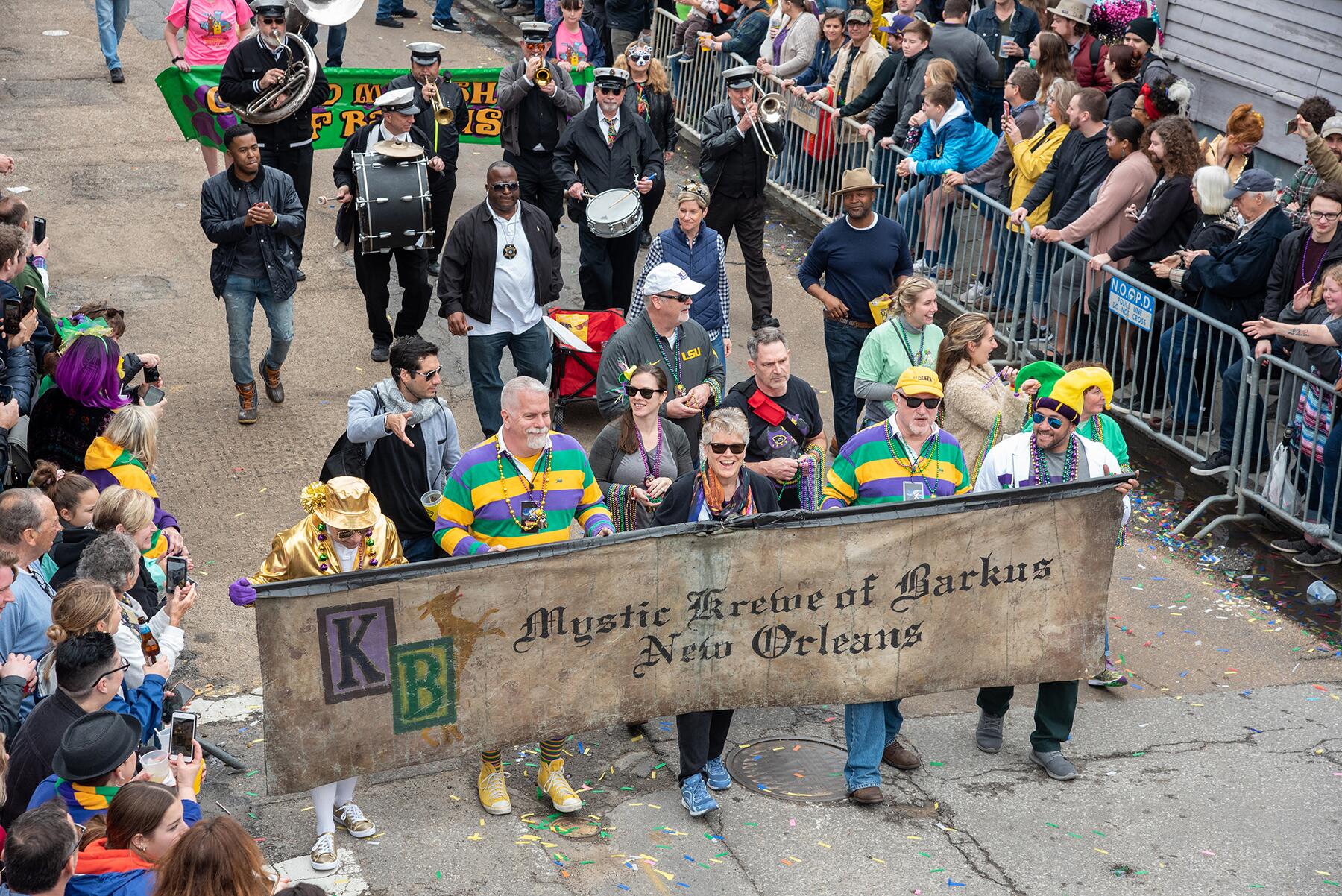 All proceeds from The Mystic Krewe of Barkus go to benefit animal organizations around New Orleans and the Gulf South area. Humans and dogs gathered in their costumes at Armstrong Park to sample an array of food and beverages before the walking parade began at 2 p.m. Each year, it makes a 15-block loop through the center of the historic French Quarter. 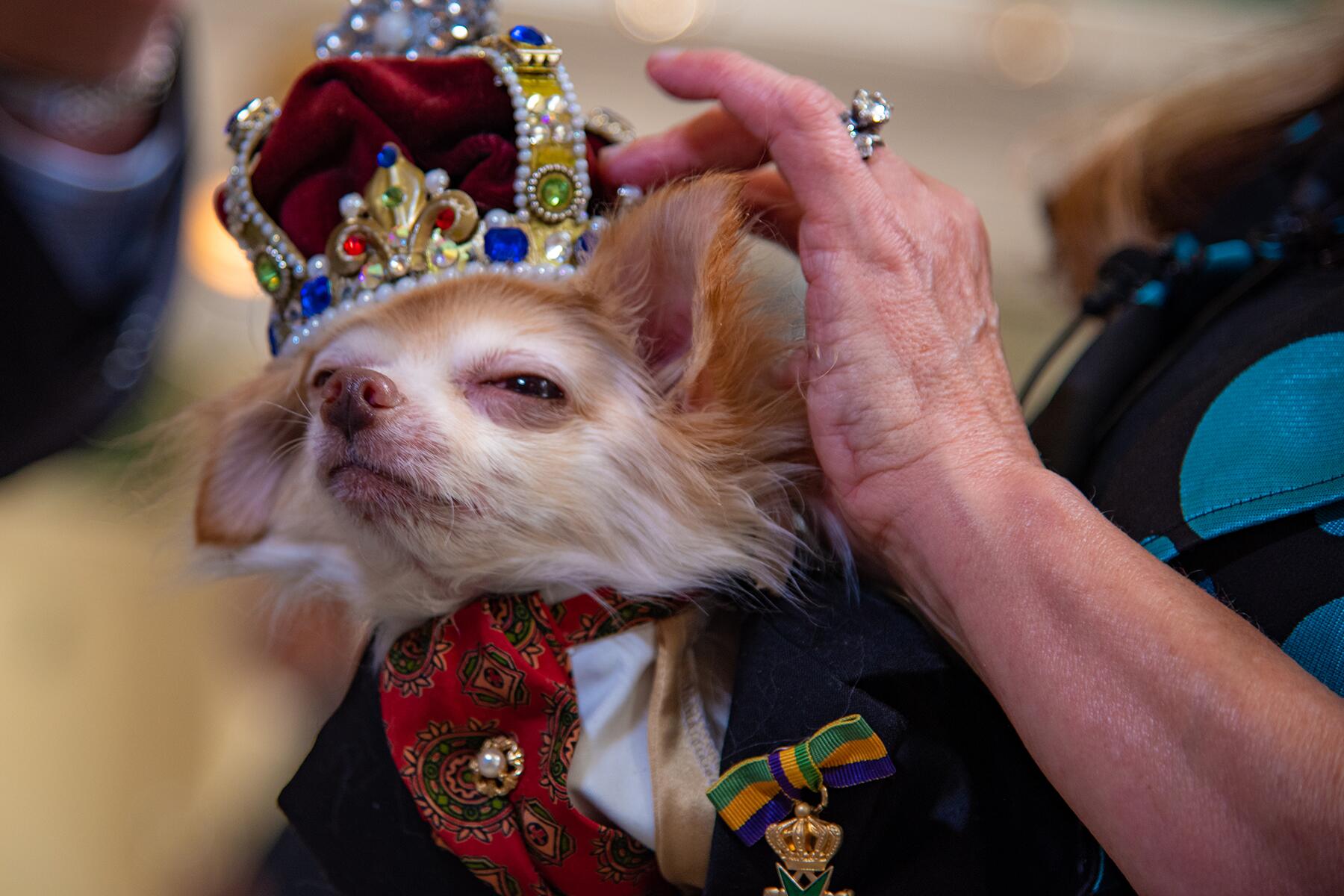 Two dogs––a male and a female; one a purebred and one a rescue––are chosen annually to be King and Queen of Barkus.

King Edward VII (Eddy to his friends) is the canine companion of Cheryl and Don Bloomenstiel, who rescued him from a shelter in Wisconsin. This small-but-mighty, four-pound Chihuahua mix donned a custom-made wardrobe, including a tiny, monogrammed shirt, a tuxedo jacket, and a coronation cape and crown–both fashioned after the originals that King Edward VII wore at his coronation. 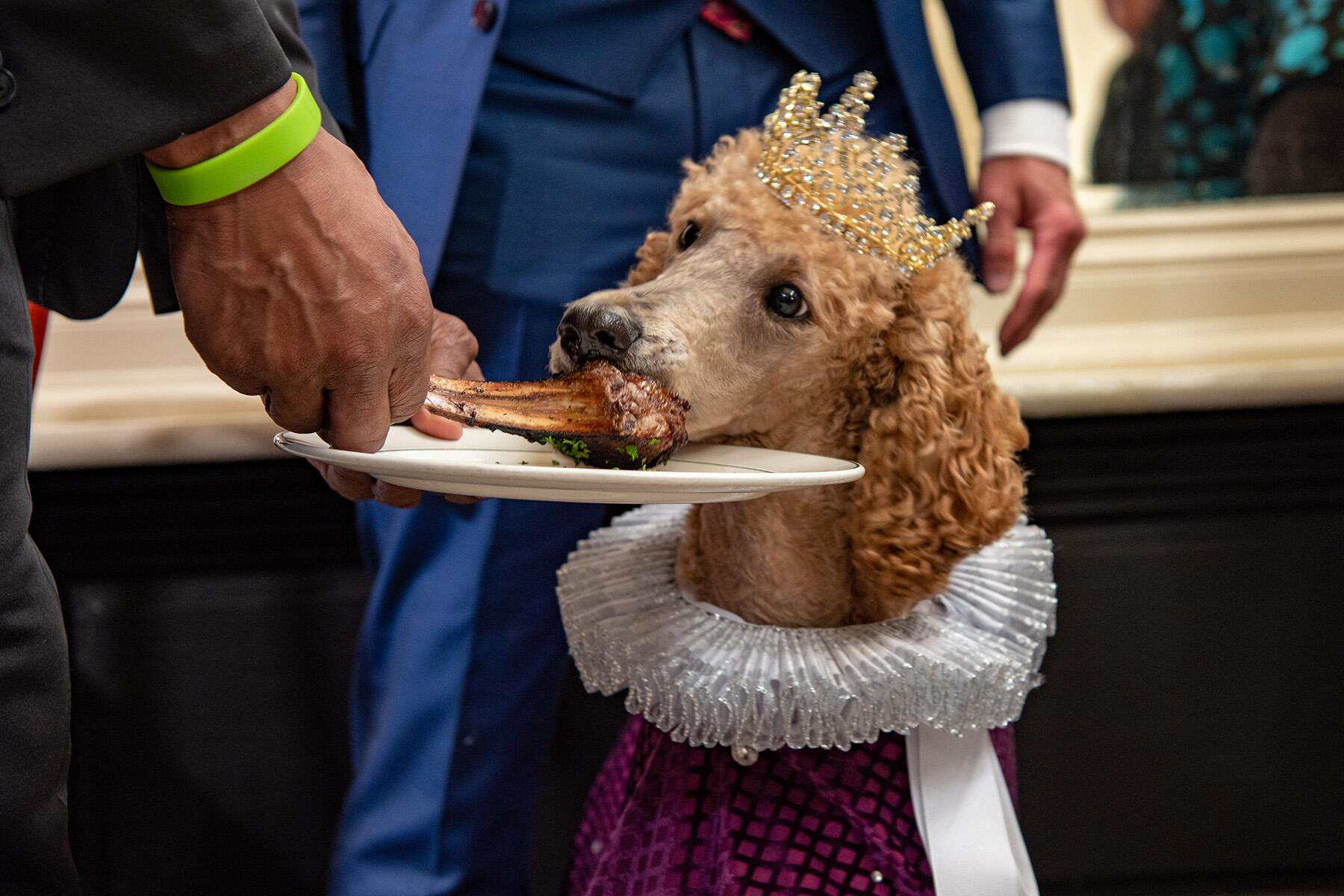 On the morning prior to the parade, King Eddy was joined by his Queen, Her Majesty XVIII, Belle Hebert, at Galatoire’s Restaurant. The royal pair gnawed on lamb chops as their humans toasted the new monarchs with plenty of champagne.

Belle is a Red Standard Poodle and the daughter of Marc Hebert of Old Metairie, Louisiana. According to Hebert, she’d rather be out fishing but was certainly happy to have her nails buffed and her hair done prior to donning her crystal tiara for a full weekend of events. The Windsor Court Hotel is an official sponsor of the Mystic Krewe of Barkus. Each year, the dogs of the Royal Court are invited to spend the night in the hotel, enjoying every luxury at the property. 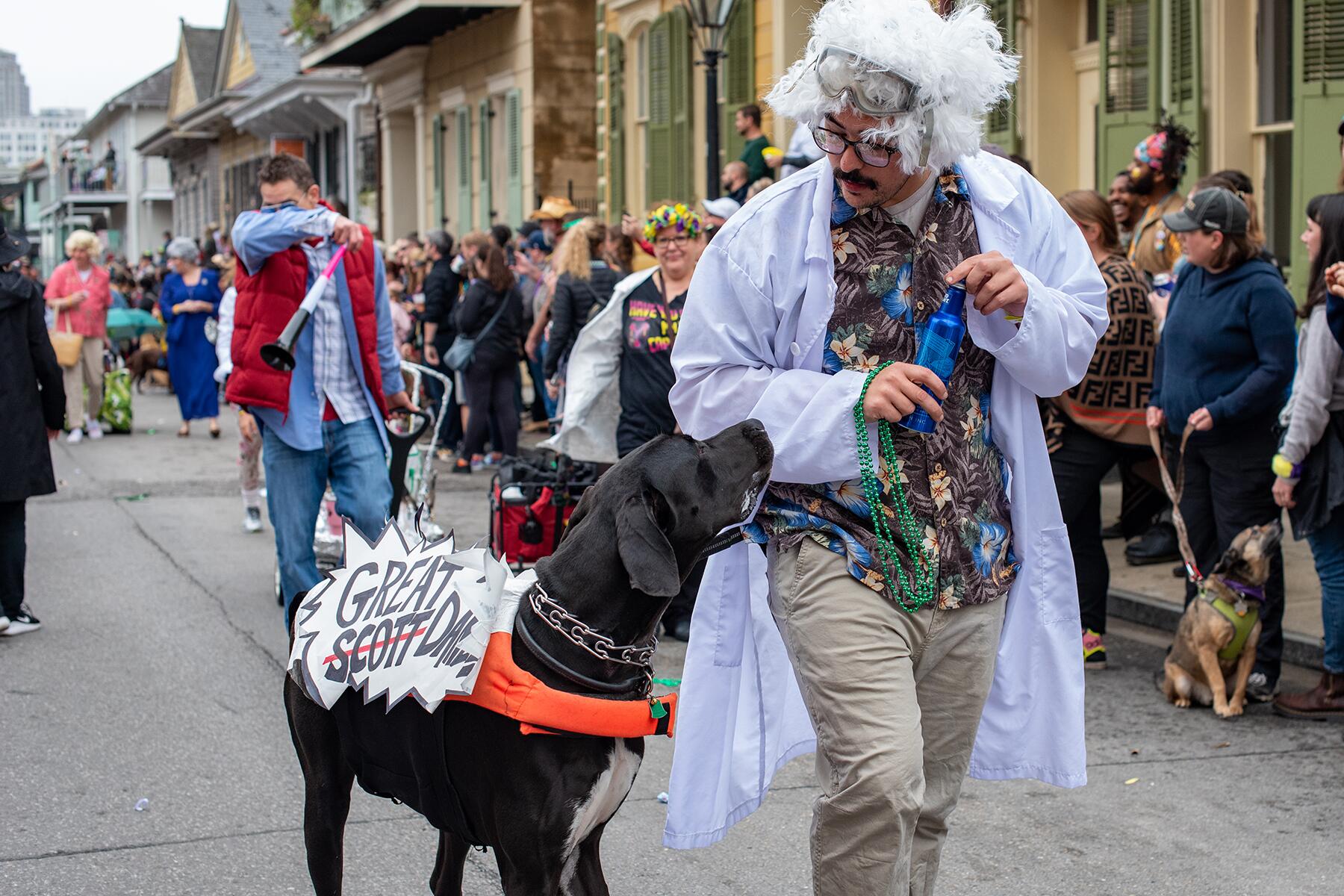 This year’s theme was Bark to the Future: Barkus Returns to the ‘80s, with plenty of costuming and pun-filled signage. 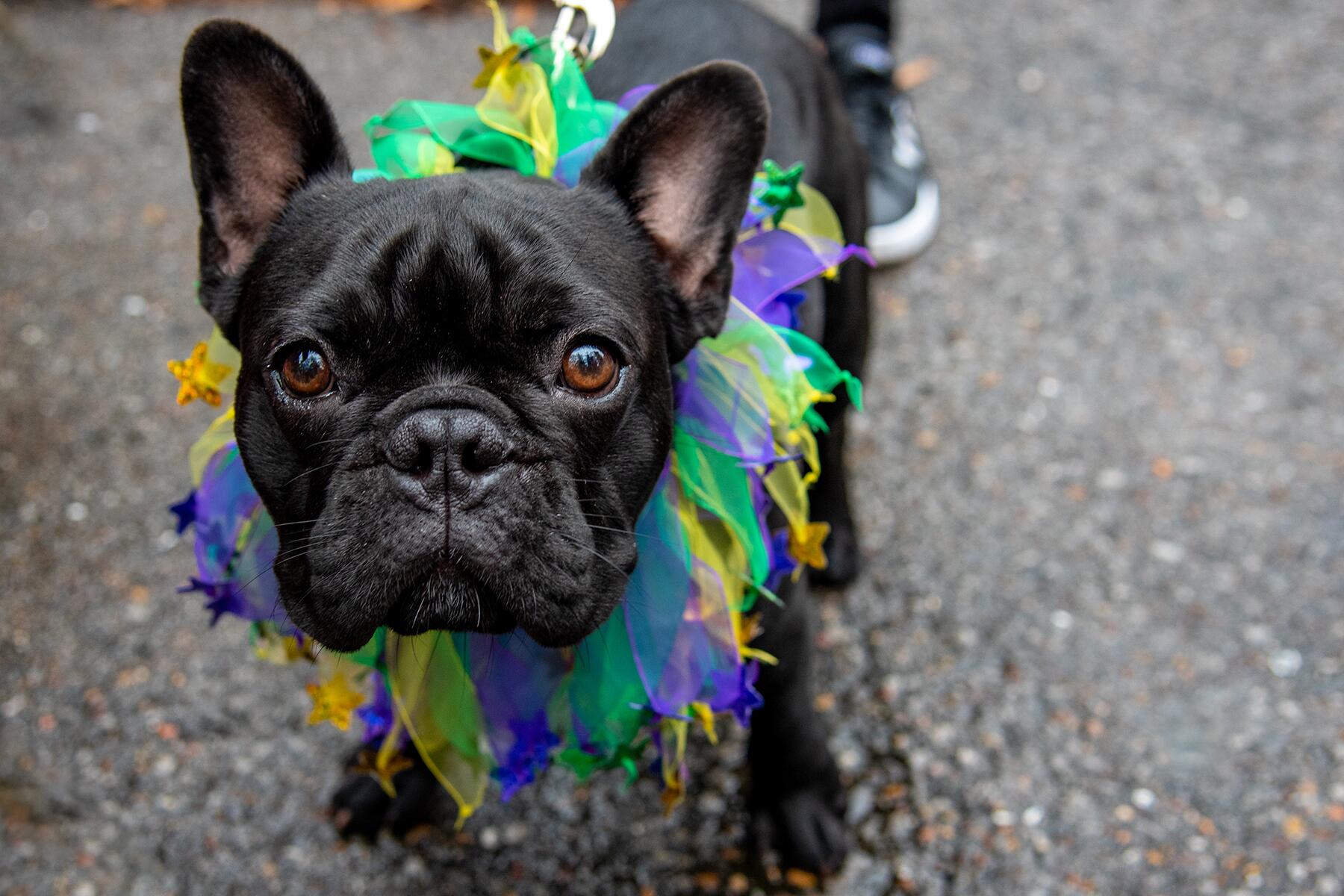 All hail Grand Marshall, Nacho Moreno! This sneaker-chewing French Bulldog is a poser­­––but in the best way. He’s frequently referred to as Barkus’ Most Photogenic. 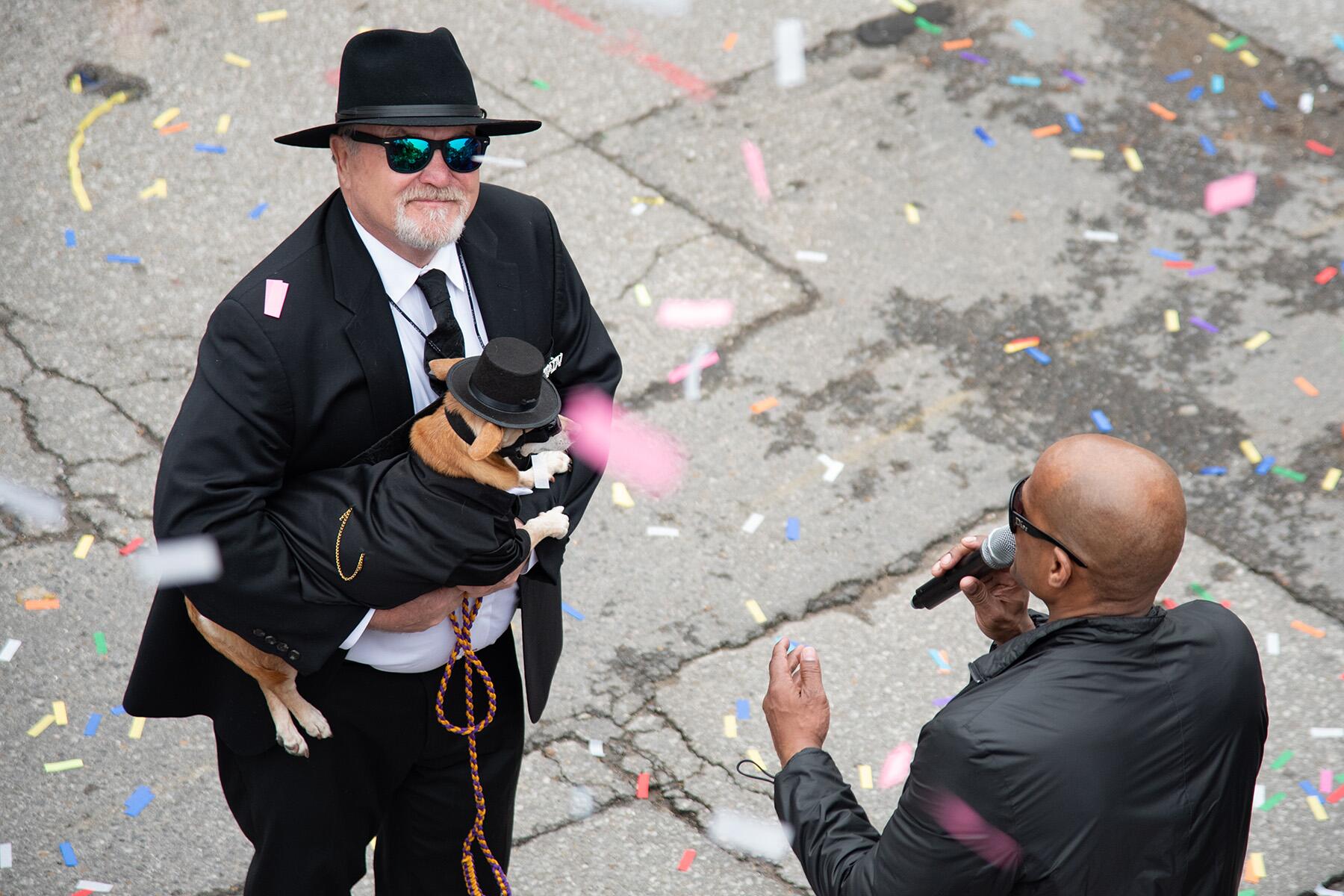 Founder of Barkus, Tom Wood, and his rescue Jo Jo (named for the original Jo Jo, First King of Barkus) stop for a meet-and-greet on the parade route. They chatted with Gregory Curtis, the president of the Barkus Board, as Wood and Jo Jo paid tribute this year to the 1980 musical comedy The Blues Brothers. 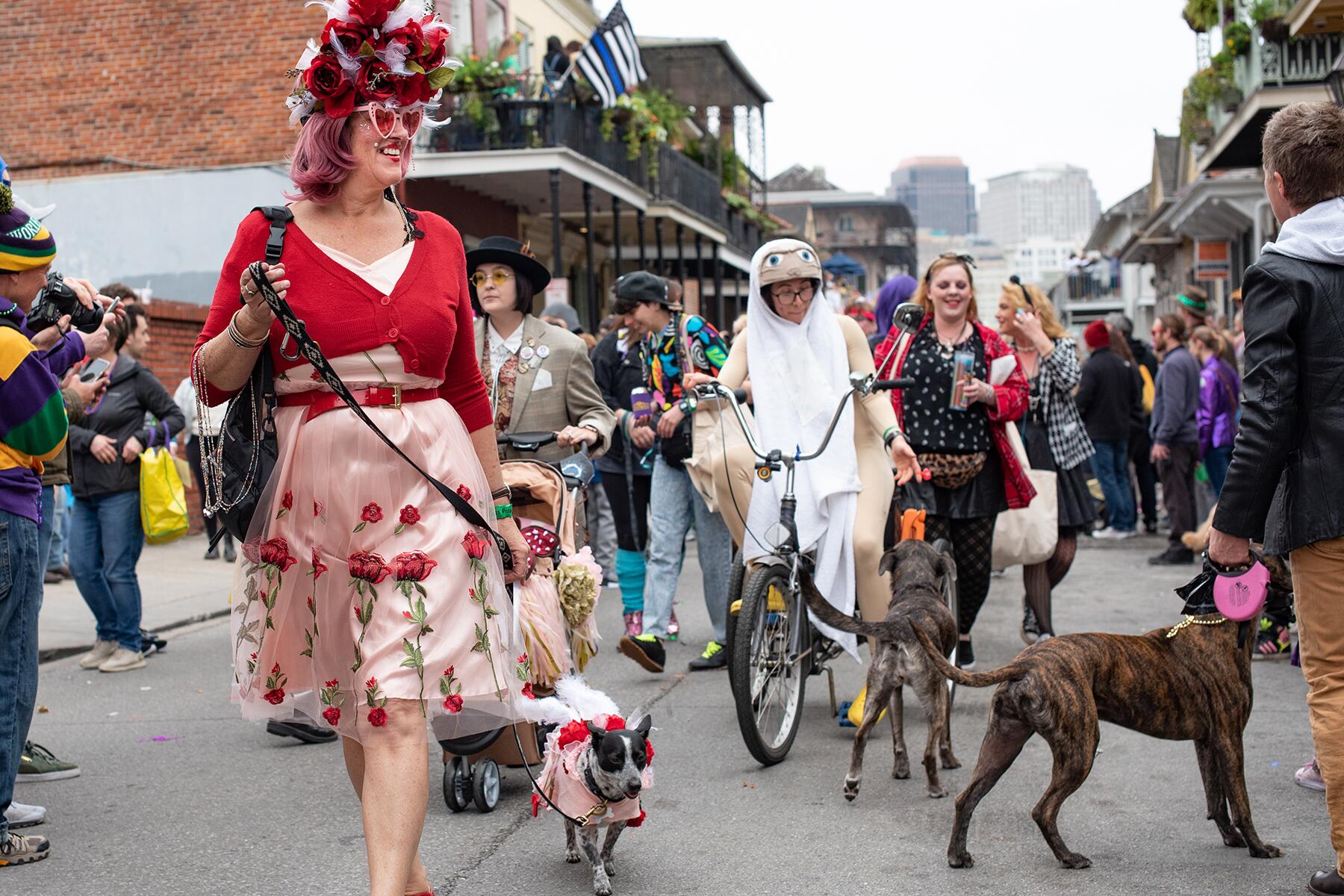 It’s not all about the dogs. The Mystic Krewe of Barkus presents a pretty fashionable human moment, as well. 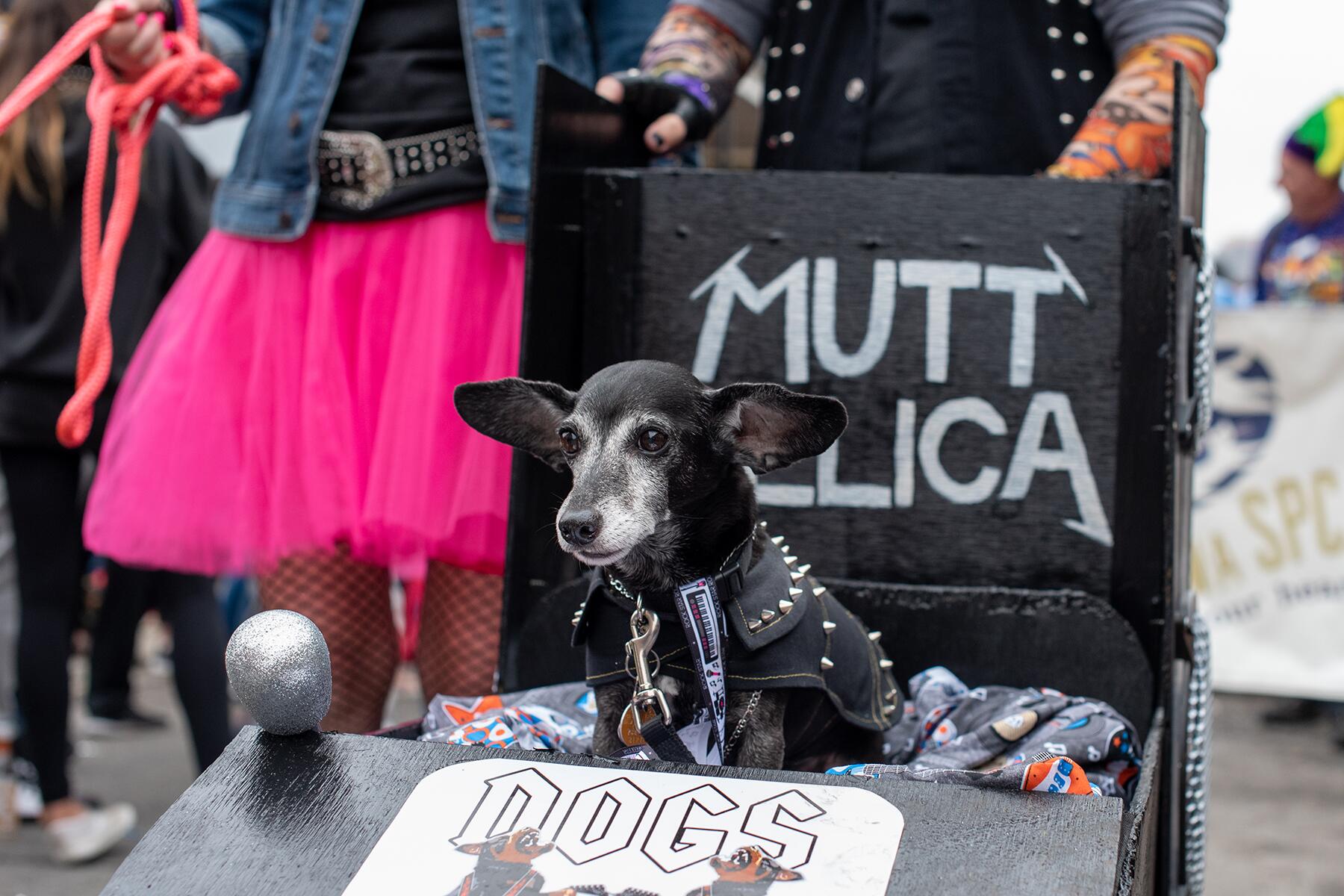 The Return to the ’80s theme inspired plenty of album nostalgia, including more than one member paying homage to Rock legends––from heavy metal to hair bands to Huey Lewis. 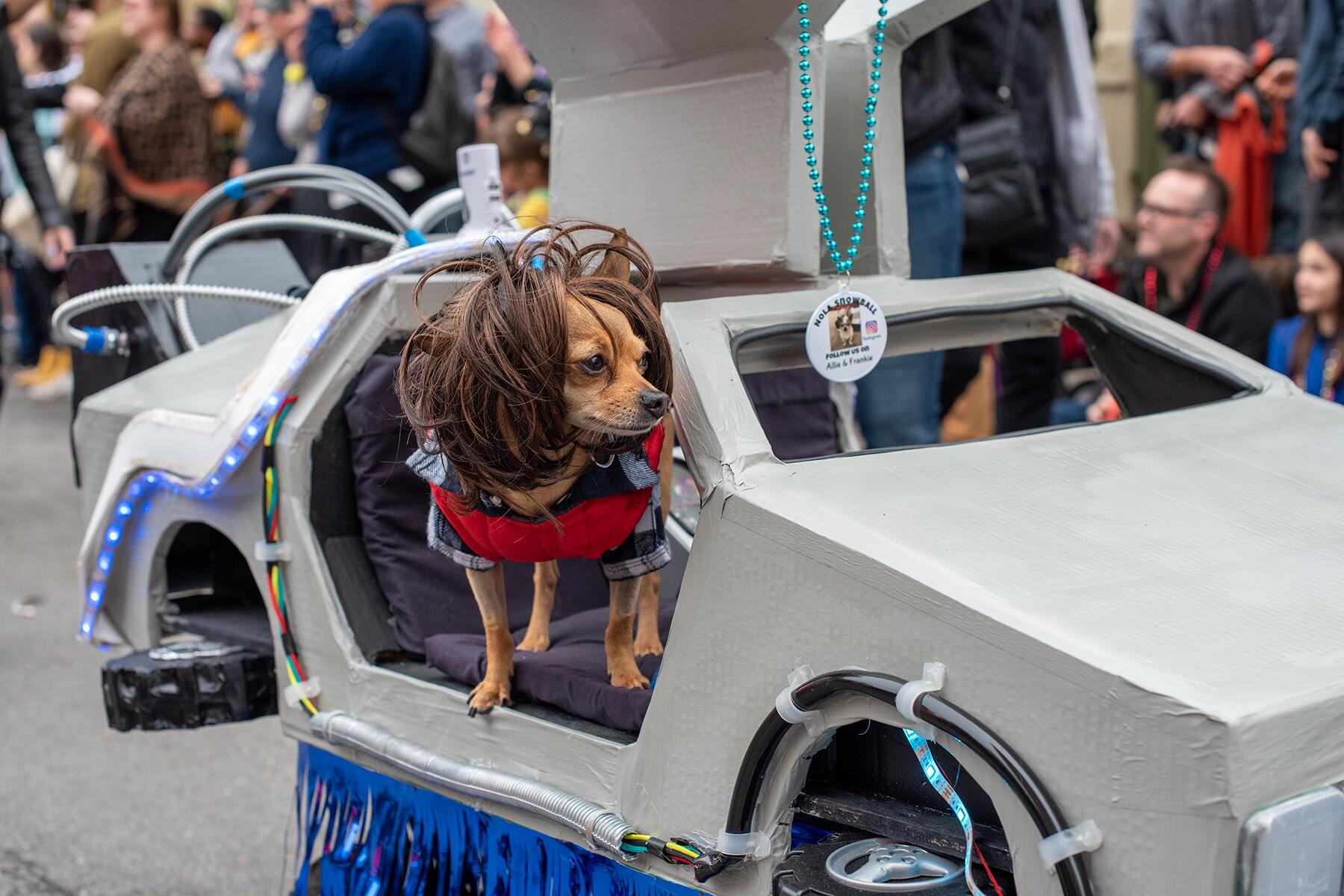 Some creatures––perhaps too small to walk all 15 blocks––rolled through the French Quarter on floats. This Marty McFly lookalike kept a watch for traffic jams ahead from the front seat of a custom DogLorean, complete with gull-wing doors and a Flux Capacitor. 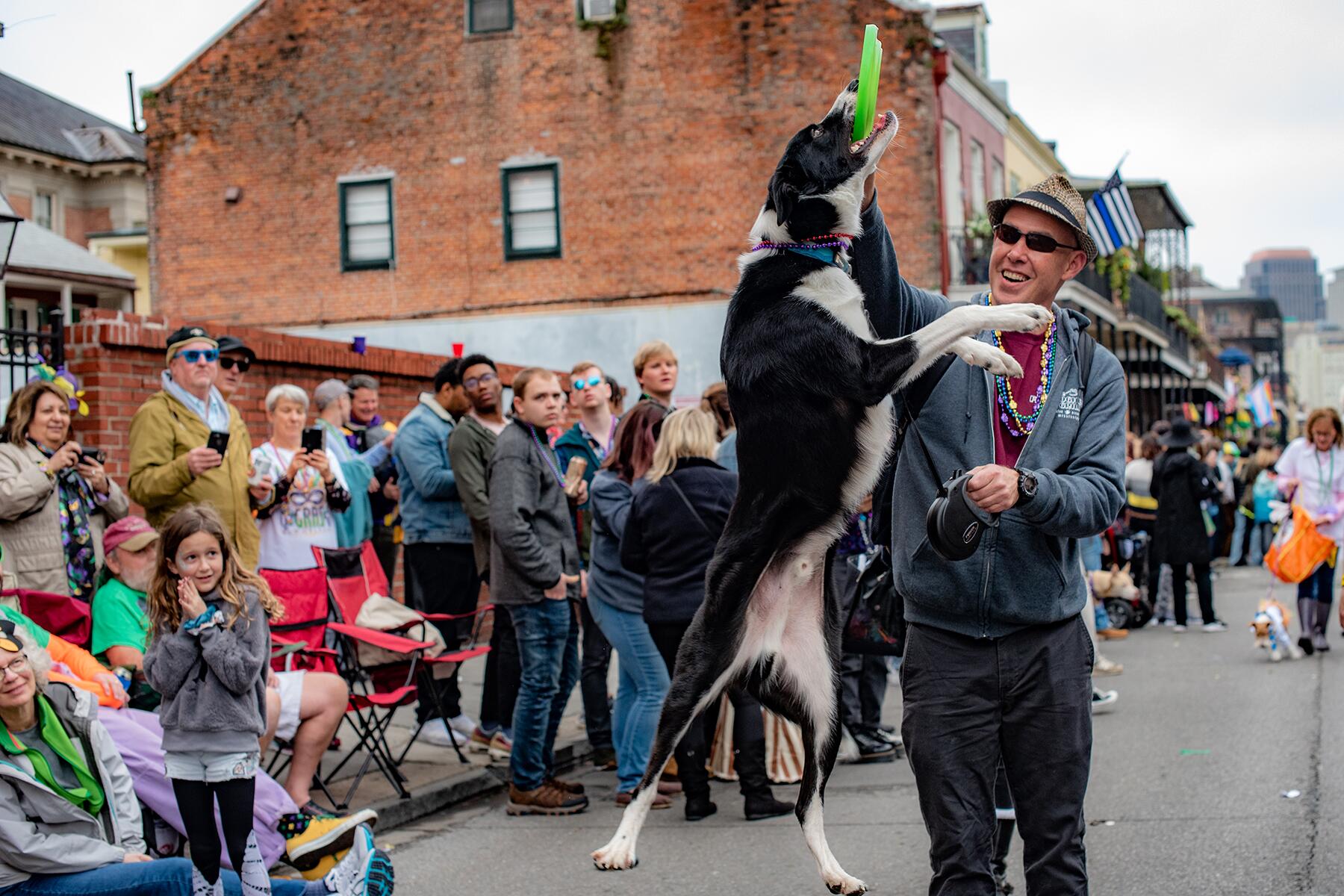 It’s difficult to play frisbee in the middle of a 500-dog walking parade, but it’s not impossible. Three-year-old Border Collie Mitch was happy to go vertical. He hails from Clinton, Mississippi, and traveled to New Orleans for the parade with his owner Joshua Welch. 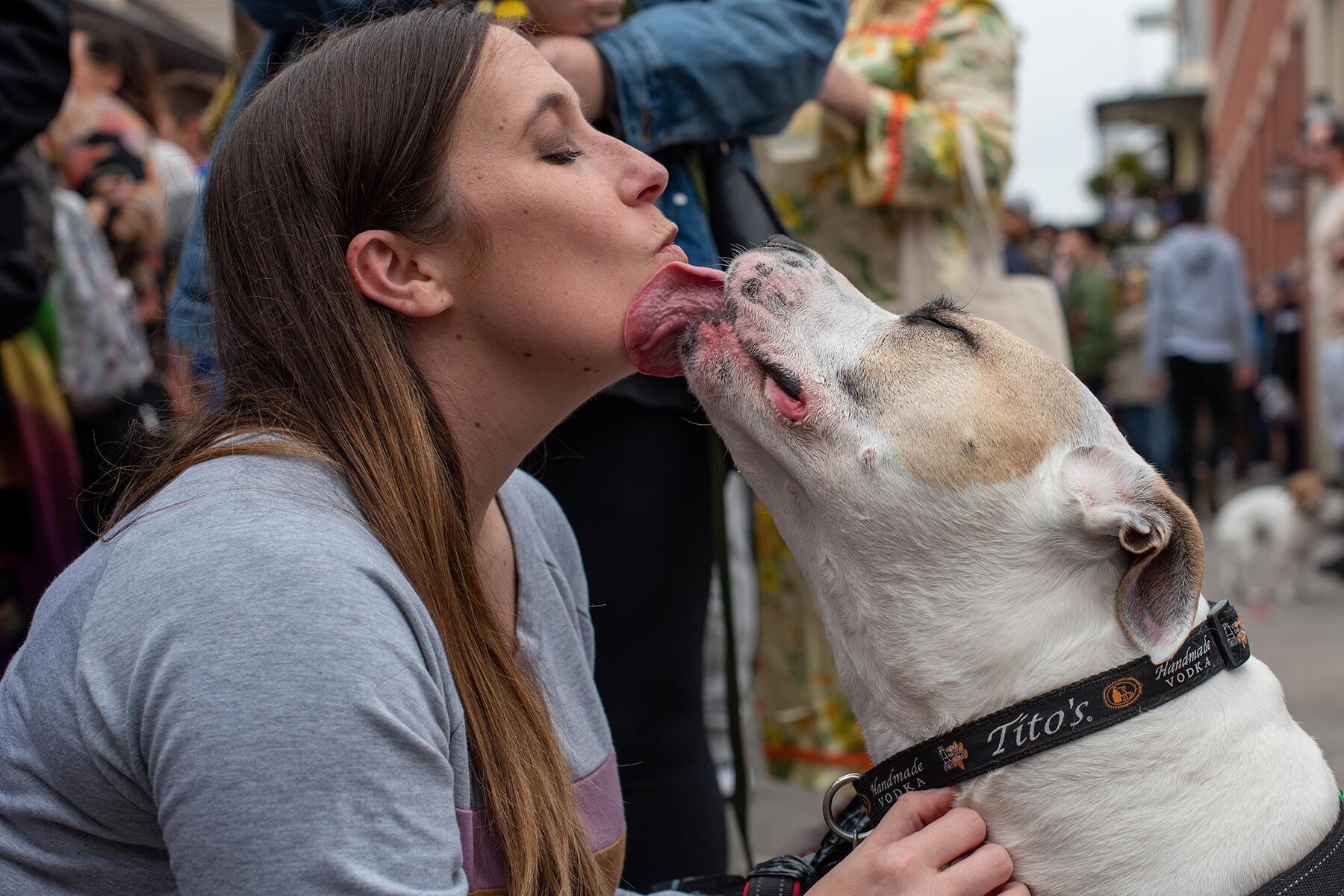 In the midst of the chaos and costumes, the barking and dancing, the frisbees and the brass bands, there were quieter, smaller moments… if only to remind us of the wonderous joy of having a dog.