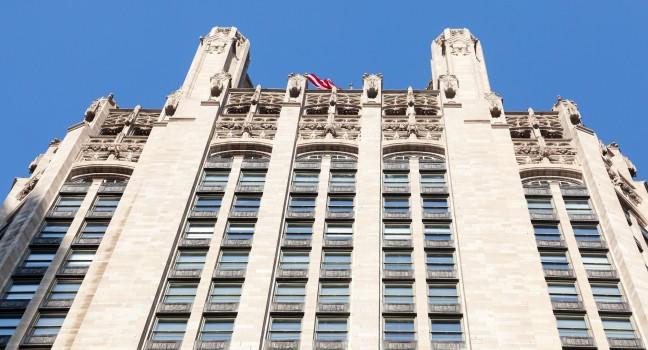 To create a home for his newspaper, Chicago Tribune publisher Colonel Robert McCormick held a design competition in which entrants were judged anonymously. After rejecting a slew of functional modern designs by such notables as Walter Gropius, Eliel Saarinen, and Adolf Loos, McCormick chose the work of architects Raymond Hood and John Mead Howells, who were inspired by the cathedral in Rouen, France. The result, which opened in 1925, was a soaring Gothic building with flying buttresses in its crown. Embedded in the exterior walls are chunks of material taken from famous sites, including the Taj Mahal. On the ground floor are the studios of WGN radio, part of the Chicago Tribune empire, which also includes WGN-TV, cable-television stations, and the Chicago Cubs. (Modesty was not one of Colonel McCormick's prime traits: WGN stands for the Tribune's self-bestowed nickname: World's Greatest Newspaper.)