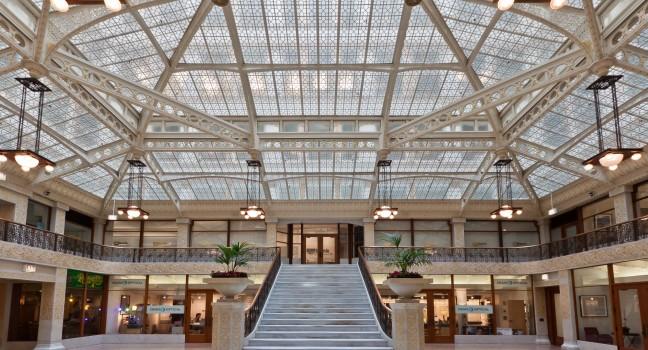 This 11-story structure, with its eclectically ornamented facade, got its name from the pigeons and politicians who roosted at the temporary city hall constructed on this site after the Great Chicago Fire of 1871; the structure didn't last long, and the Rookery replaced it. Designed in 1885 by Burnham & Root, who used both masonry and a more modern steel-frame construction, the Rookery was one of the first buildings in the country to feature a central court that brought sunlight into interior office spaces. Frank Lloyd Wright, who kept an office here for a short time, renovated the two-story lobby and light court, eliminating some of the ironwork and terra-cotta and adding marble scored with geometric patterns detailed in gold leaf. The interior endured some less tasteful alterations after that, but it has since been restored to the way it looked when Wright completed his work in 1907.