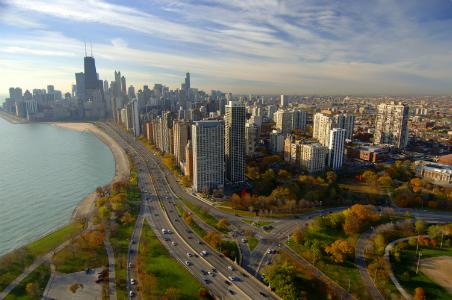 This fall, the Windy City welcomes major food festivals, celebrates 50 years of the Chicago International Film Festival, and launches new eateries that prove the city is at the top of its culinary game. Elsewhere, there’s a wealth of cultural events, the start of football season, holiday shopping, and splashy new hotel openings. From a museum exhibition on David Bowie to celebrity chef Rick Bayless’s new restaurant, here’s everything you need to know about what’s hot in Chicago this fall. 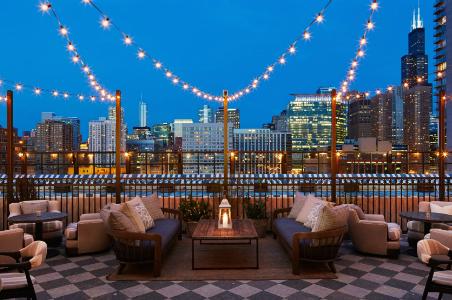 There’s only one new hotel to check in at this season, but it’s a notable one: Soho House Chicago, the luxe London brand’s third U.S. property, which offers just 40 rooms and features a stunning rooftop (pictured) with a pool, panoramic views of the skyline, and outdoor fireplaces for chilly evenings.

Other properties are offering seasonal packages that are worth considering. Start holiday shopping early with a shopping package (includes a $50 Macy’s gift certificate and a welcome cocktail at Jose Garces’ Mercat a la Planxa) at Renaissance Blackstone Hotel in the heart of the South Loop, or head across the street from Hotel Lincoln to Lincoln Park’s Green City Market (Wednesdays and Saturdays), with props from the hotel’s package including a tote bag, $20 in market tokens, a Green City Market cookbook, and a behind-the-scenes tour. Meanwhile, JW Marriott Chicago is partnering with the city’s newest craft brewery, West Coast–based Lagunitas Brewing Company, for the “Beercation” package, which includes transportation to and from the brewery, a tour and tasting, in-room Lagunitas brews, and a signature Lagunitas Mason jar.

Elsewhere, the “Chicago Football Package” at Radisson Blu Aqua Hotel includes a daily $50 food-and-beverage credit (for game-day breakfast with an Italian twist at Filini or a hearty dinner the night before) and 15 percent off valet parking. Check out the exhibit everyone is talking about—“David Bowie Is” at the Museum of Contemporary Art—with help from the “Day and Night with David Bowie” package at Thompson Chicago, which folds in two tickets, a private meet-and-greet at the show, breakfast for two, and a build-your-own Ziggy Stardust cocktail kit. 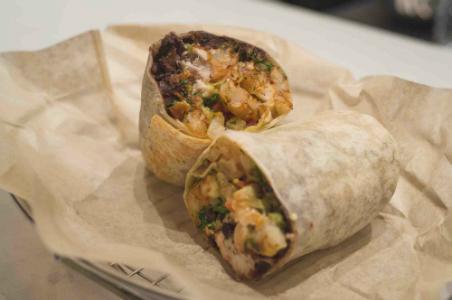 August saw a flurry of restaurant openings, including Rick Bayless’s new Xoco outpost in Wicker Park. Like its River North sibling of the same name, authentic tortas, churros and caldos can be found on the menu here. Also flaunting Mexican street food is River North’s Mercadito Counter (pictured), with all-day breakfast and treats like a smoked and fried hot dog topped with mole. Replacing beloved Henri on South Michigan Avenue is Acanto, serving casual Italian fare like suckling pig and a stellar wine list among tufted-leather banquettes and an accent wall crafted from mohair.

Other notable newcomers include Salero, which focuses on Basque cuisine; RPM Steak, where wagyu and bison steaks plus appetizers like deviled marrow bones are served in a sunken dining room; and Labriola Ristorante & Café, which will offer Michigan Avenue shoppers a delicious break with baked goods, pastas, and sandwiches. 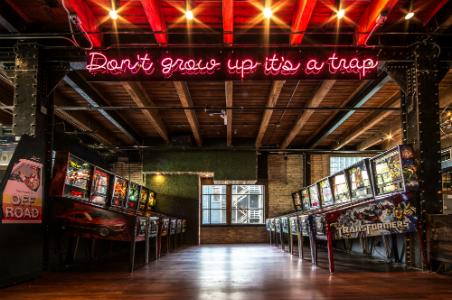 Vice District Brewing Co. is among the city’s new watering holes, serving unique beers like South Town Small, a molasses Porter. If you’re looking for retro flair, head to Henry’s Swing Club for carbonated cocktails on tap and frozen drinks paired with live music and snacks like Coney Island chili fries and New Mexican Hatch green-chili nachos. At Headquarters Beercade River North (pictured), fine food is seamlessly paired with beer, Shel Silverstein’s sketches and prose are plastered on the walls, and 1930s fire extinguishers and 1940s meat grinders serve as decoration. Guests are encouraged to check in cell phones at a station for a technology-free night.

Celebrity chefs descend upon Chicago Sept. 26–28 for Chicago Gourmet 2014; events range from Friday night’s “Late Night Gourmet” ($50, plus $115 for the pre-party “Hamburger Hop” tasting) at The Underground, with bites and libations prepared by Chicago’s best chefs, to a Grand Cru tasting ($199 plus general admission) on Saturday and Sunday afternoons, hosted by seven master sommeliers and 16 James Beard Award-winning chefs.

Lovers of Italy’s gastronomy should head to Eataly Chicago for the Italian Food & Wine Festival (Oct. 14–16). Highlights include a chef seminar taught by Tony Mantuano, a four-course dinner hosted by Lidia Bastianich, and a wine tasting of Italian varietals. Another food fest takes a casual turn with chef Bill Kim’s inaugural Ramenfest ($45 in advance, $55 at the door) on Nov. 8 at bellyQ. Eleven chefs from around the city will reinterpret the dish with their own unique spins. 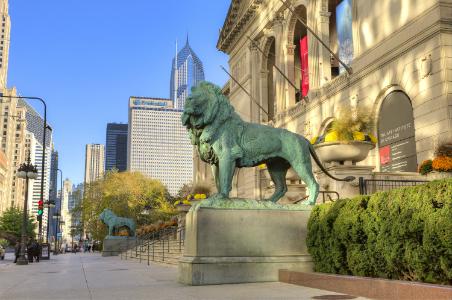 This season’s biggest event is the Chicago International Film Festival (Oct. 9–23), which celebrates its 50th year in 2014. The schedule will be announced in mid-September, with screenings taking place at AMC River East 21, convenient to the Loop and downtown Chicago.

An exhibit celebrating Belgian surrealist René Magritte (“Magritte: Mystery of the Ordinary”) extends until Oct. 13 at the Art Institute of Chicago (pictured) while a new crop of exhibits debut. “Ghosts and Demons in Japanese Prints” (opens Oct. 11) is a new twist on Halloween while Lucy McKenzie’s largest U.S. exhibition (“focus: Lucy McKenzie”) kicks off on Oct. 23.

Another must-see art exhibit is Expo Chicago ($20 daily or $30 for a three-day pass; Sept. 18–21 at Navy Pier) with tours, artist chats, and exhibits by famed arts museums. The breadth of this major art festival spans 17 countries through 140 galleries.

But the most anticipated art show of all this fall is “David Bowie Is” (opens Sept. 23) at the Museum of Contemporary Art, the only U.S. venue chosen to host the show. This retrospective of Bowie’s career features 400 objects—from handwritten lyrics to rare performance materials, and costumes, too—spanning the past five decades.

Finally, share your love for global culture at the 16th annual World Music Festival, an 11-day fest that runs through Sept. 21. Representing 33 countries, 62 artists and groups perform at venues around Chicago, and all performances are free.