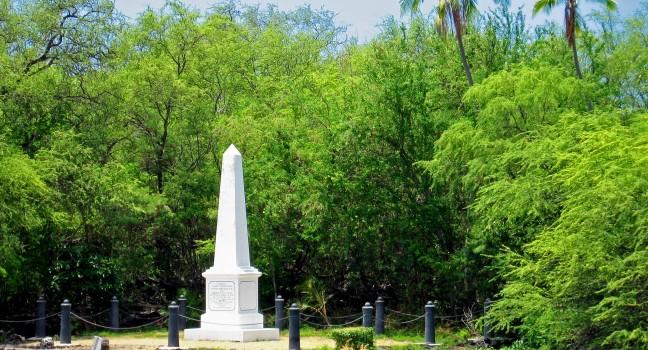 On February 14, 1779, famed English explorer Captain James Cook was killed here during an apparent misunderstanding with local residents, and this 27-foot-high obelisk marks the spot where he died. He had chosen Kealakekua Bay as a landing place in November 1778. Arriving during the celebration of Makahiki, the harvest season, Cook was welcomed at first. Some Hawaiians saw him as an incarnation of the god Lono. Cook's party sailed away in February 1779, but a freak storm forced his damaged ship back to Kealakekua Bay. Believing that no god could be thwarted by a mere rainstorm, the Hawaiians were not so welcoming this time. The theft of a longboat brought Cook and an armed party ashore to reclaim it. Shots were fired, daggers and spears were thrown, and Captain Cook fell, mortally wounded. A white obelisk monument to the man is located at Kaawaloa, at the north end of the bay.