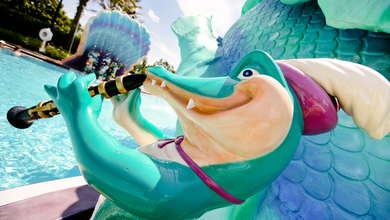 Ornate, Big Easy–style row houses with wrought-iron balconies cluster around squares shaded by mature oaks and magnolias, in this relatively quiet and smaller resort, which appeals to couples more than families. Lamp-lighted sidewalks line streets named for French Quarter thoroughfares, and the sound of passing horse and carriages adds to the charming vibe. The rooms are decorated in subdued Mardi Gras shades of gold, purple and green, and the food court serves Crescent City specialties such as jambalaya and beignets and there's an intimate jazz club on property.

YOU SHOULD KNOW Public areas can be noisy, even though there tend to be fewer families here, perhaps because the usual Disney cartoon themes are absent. Also, the shuttle bus service can be slow.

Standard rooms have two doubles or one king bed, with white, duvet-style linens and classic, antiquey wood headboards. Decorated with subtle touches of purple, gold and green, the colors of Mardi Gras, the room also has a small table with armchairs, a dresser that holds the flat screen TV and coffee maker, a mini-fridge, and an upholstered luggage stool under a wooden rack with handy hat and coat pegs and a shelf for keys. All rooms at French Quarter are undergoing renovations and should be completed by mid-2018. 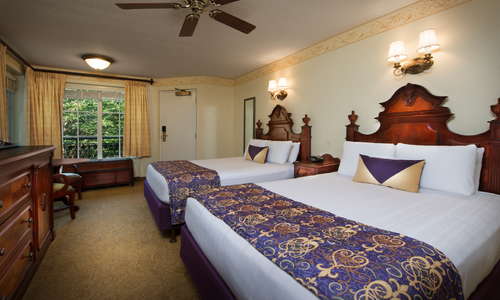 Separated from the main room by a curtain, the bathroom is in two sections. A two sink vanity has space beneath for storing toiletries, and a clothes rack and hangers. The bathtub/shower, supplied with Disney H2O+ bath products, is separated from the vanity area by a door, allowing more than one person to use the facilities.

The lobby entry is a bright atrium, with huge windows, fountain, and definite Big-Easy touches, such as soaring, ornate, wrought-iron supports, wrought-iron benches, and loads of lush greenery. The white-columned registration area is separated from the atrium by a brick arch, which is a nice touch that helps avoid congestion, since the entrances to the food court, shop, and game room are also directly off the lobby. 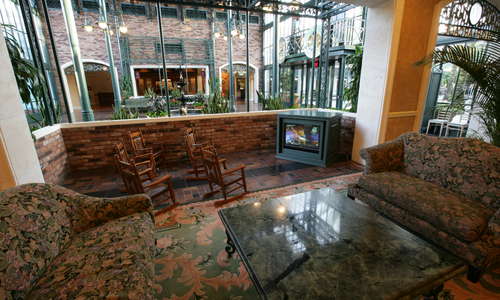 The pathway to the resort's only pool, Doubloon Lagoon, is lined with mature palm trees, enticing you with a view of the river beyond. A Mardi Gras float sea serpent hides a 51-foot slide, and younger kids have a fun water spray play area nearby. The pool bar is also home to the laundry facilities, so you can do laundry and swim at the same time. Towels are supplied, and lifeguards are often on duty. 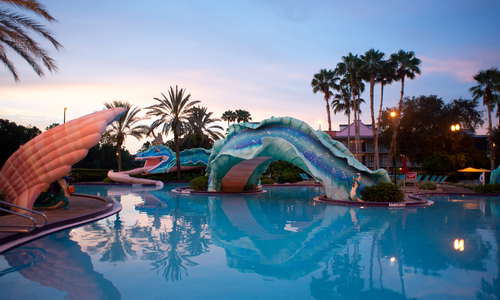 No gym onsite, but plenty of jogging trails, and bike rentals.

The food court, Sassagoula Floatworks and Food Factory, a large and airy space with a good number of tables and chairs, offers no table service, but does serve up New Orleans inspired breakfast, lunch and dinner from several self-serve stations. 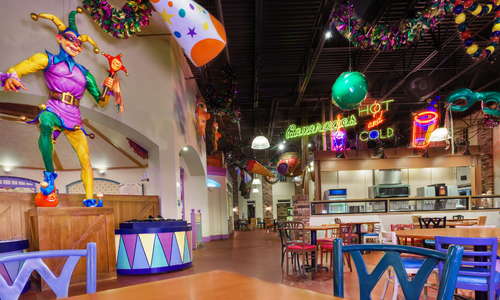 Scat Cat's Club is a jazz lounge decorated with music memorabilia, where you can enjoy cocktails, beer and wine along with live jazz. Outside, with a view across the pool to the river, Mardi Grogs offers bar service for frozen drinks, beer, wine and quick snacks.

Boats provide quick access to Disney Springs, and buses take guests to all other points Disney, as do ride-share services and taxis, so a car isn't absolutely necessary, unless plans include visits to Universal or SeaWorld.

The resort is a 5-minute boat ride or a 10 minute walk to its sister resort, Port Orleans-Riverside, where Boatwright's Dining Hall offers sit-down table service. A few minutes more on the boat brings you to the dining and shopping extravaganza at Disney Springs. Restaurants include the three-story PaddleFish, a modern-day paddleboat, where seafood is king and the outdoor rooftop terrace offers striking views of the lagoon and the entertainment at the Springs. Nearby you’ll find Raglan Road, an authentic Irish Pub, featuring refined Irish fare and lots of music and dancing; Morimoto’s Asia, an Asian Fusion eatery owned by, and often visited by, famed Japanese chef, Morimoto; and Chef Art Smith’s Homecomin’ restaurant, showcasing local, Southern food.

Disney Springs (20-minute boat ride) offers dozens of places to lift a glass. The rooftop bar at Morimoto's Asia offers high-end sake; Raglan Road's Irish pub pours a mean Guinness; wine connoisseurs can head to Wine Bar George, where a master sommelier dispenses a wide range of domestic and imported wines; and House of Blues is the spot for beer.

Rich with the look and laid-back vibe of New Orleans, this resort offers an almost un-Disney-like experience, with few cartoon references. Instead you get the sounds of jazz, the sights of wrought iron balconies and magnolia trees, and even Big-Easy favorites on the food-court menu. Best of all, a very pleasant 20-minute boat trip takes you to the heart of Disney Springs, where you can really let the good times roll without worrying about driving anywhere. 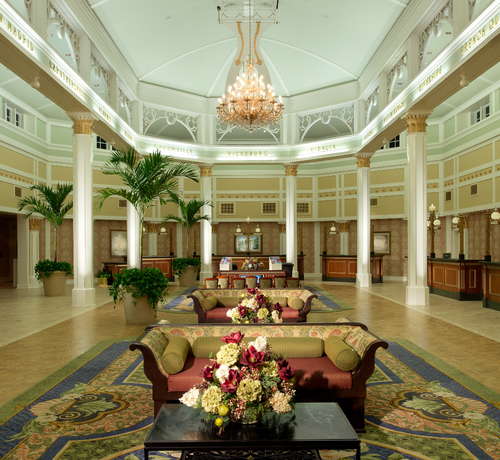 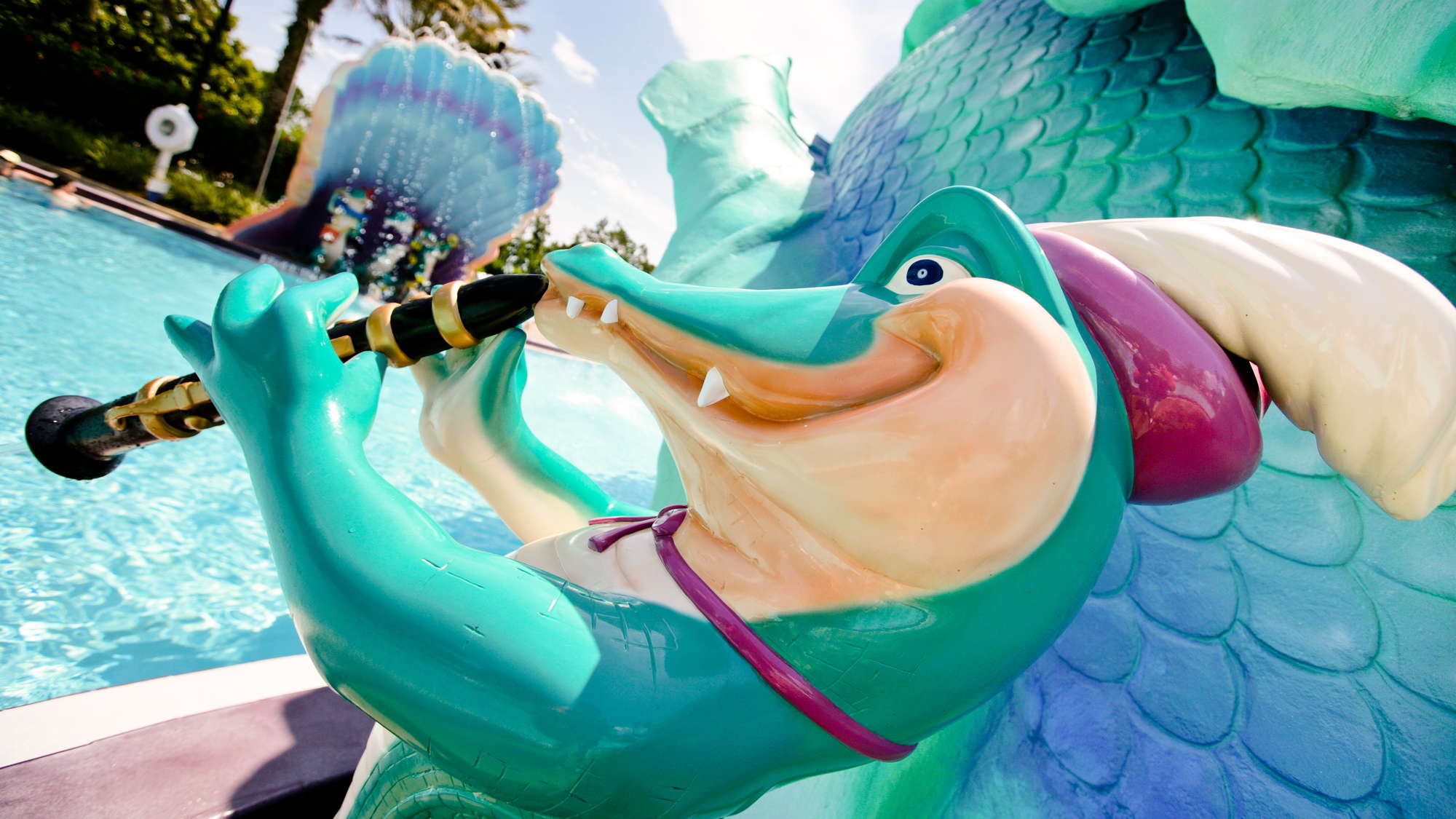 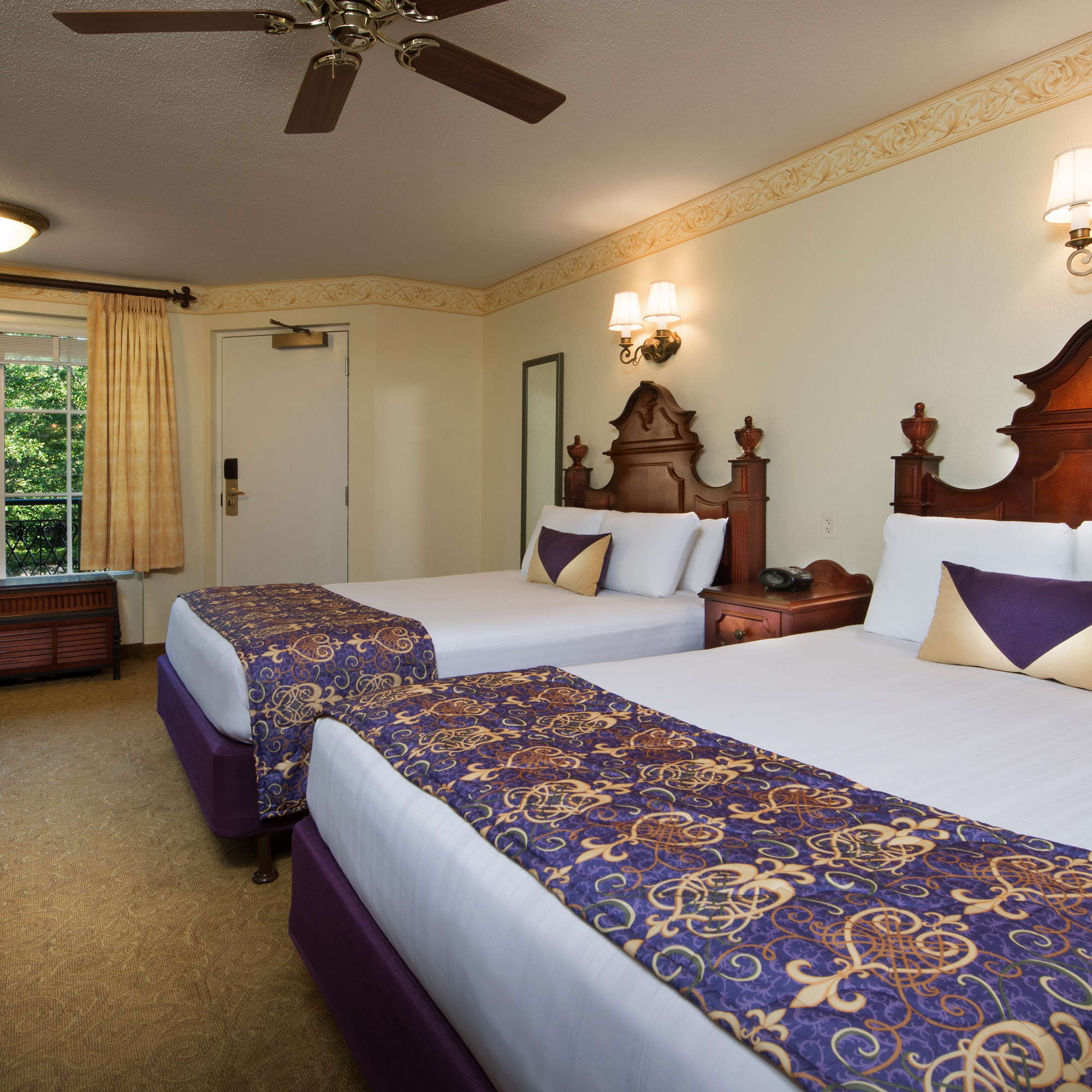 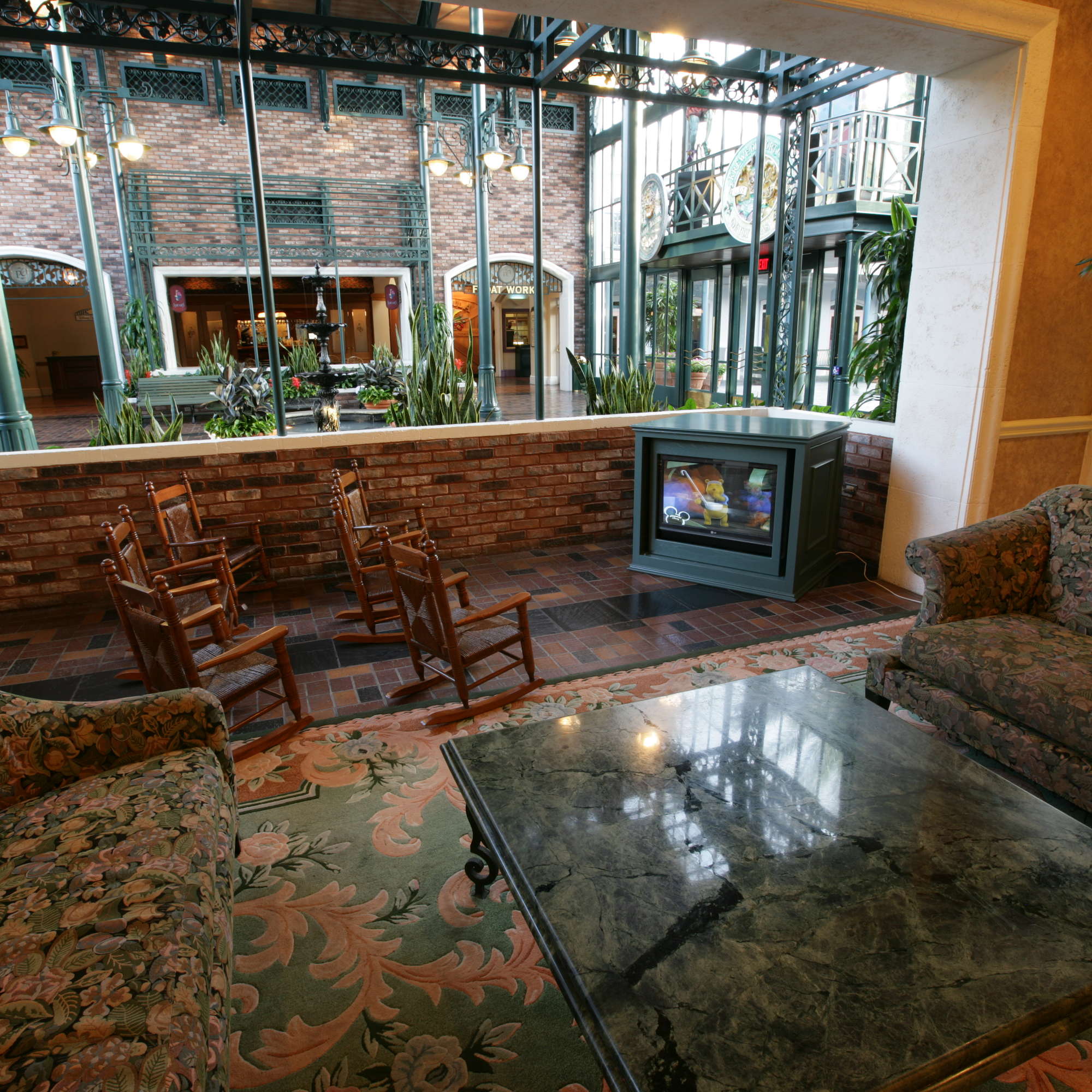 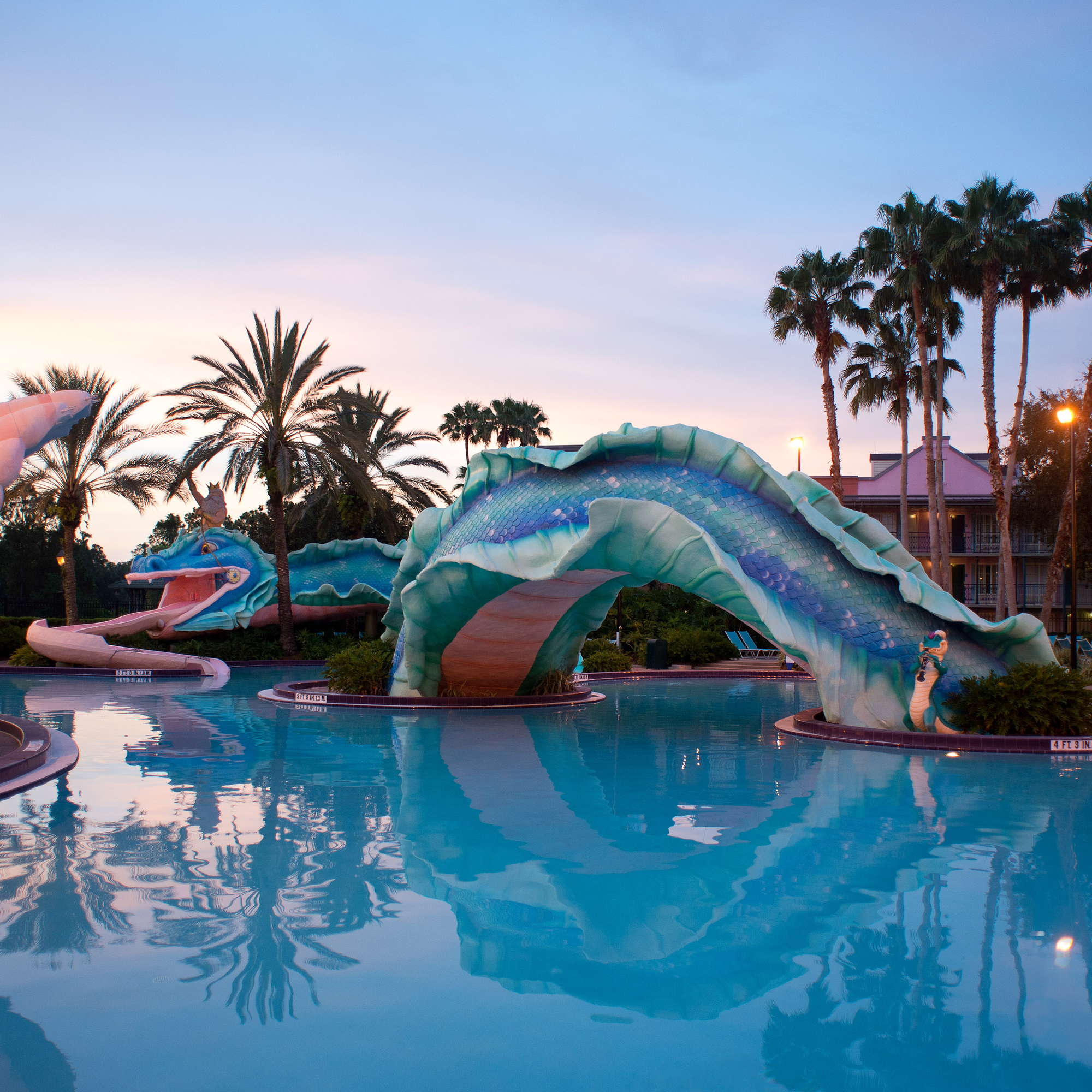 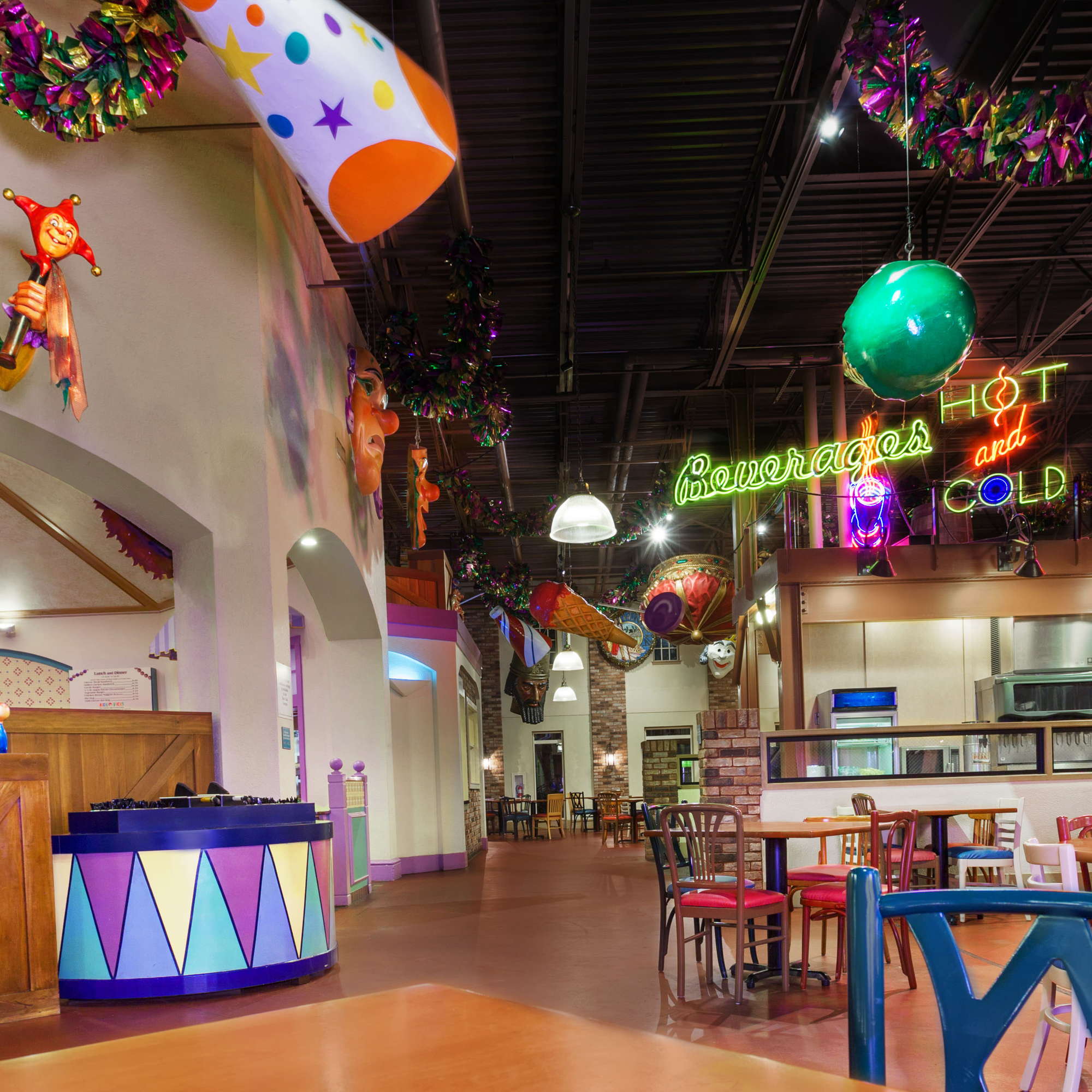