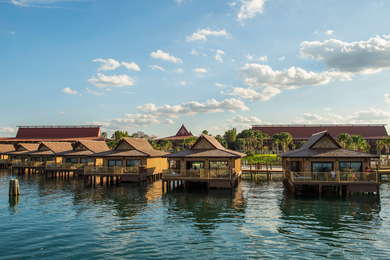 This Pacific Island–themed resort on the lagoon-circling monorail route, with its lush tropical landscaping, looks like a cluster of imposing wooden longhouses. Located directly across from the Magic Kingdom, the resort can also be reached by water launches. The abundance of kids activities, plus an on-site child-minding service, makes it a good family choice. Nearly 50 years old, the resort was one of the two original resorts built when Disney World opened in 1971. It underwent extensive renovations in 2015, including the volcano pool and slide and the Great Ceremonial House lobby, but the theme is unchanged, with plenty of drumming and chanting in the three-story atrium, and no lack of tropical drinks at the bar. The resort also added 20 bungalows built on stilts over the lagoon, which sleep up to eight. At the evening luau, Polynesian dancers and musicians perform.

YOU SHOULD KNOW Lagoon-view rooms and bungalows—which overlook Magic Kingdom fireworks—are costly, and the proximity to the transportation system dock, where the big ferry from the Magic Kingdom comes and goes and toots its horn every few minutes, can bring unwelcome noise.

The tropical decor continues in the spacious rooms, with dark, carved wood mixed with bamboo and rattan touches. Large flat-screen TVs, spacious desks and surface areas, beds with crisp white linens, bedside tables and reading lamps, are all set in soothing green and paneled surroundings. Some rooms have patios or balconies, with views of the landscape or the lagoon. Free wi-fi throughout, and charging stations mean you can stay fully charged and connected while on holiday.

YOU SHOULD KNOW The newly-built bungalows and standard rooms we visited seemed pristine, and the beds and linens looked crisp and fresh, but a substantial number of online comments describe the beds as "tired", housecleaning as less-than-meticulous, and walls thin enough to allow sounds to filter through from adjacent rooms and lobby. 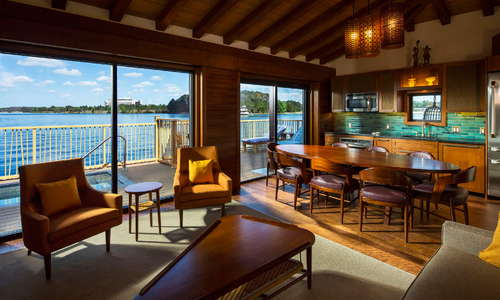 Bathrooms feature dark marble vanity tops, white tiles, and walls covered with traditional patterns, some reminiscent of symbols from the Disney film Moana. Bathrooms have bathtub/shower combos with shower curtains, along with an abundance of towels, and Disney's signature toiletries.

This three-story space is no ordinary lobby, but the Great Ceremonial House, where the sound of drums echoes beneath a vast glass roof, with its chandelier of large, rope-encased glass net floats, and bamboo bird cages. Bamboo poles, carved wood totems and details, colorful bromeliads and other greenery continue the South Pacific theme. Ample seating allows guests to relax and take in the scenery, whether they are waiting to check in, or enjoying refreshments. 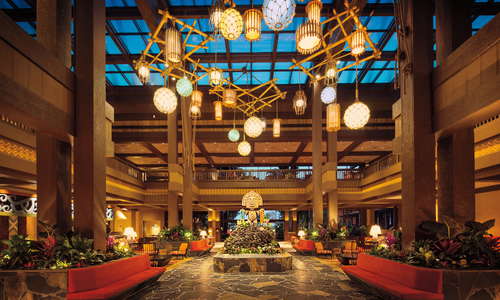 The towering volcano of the waterfront Lava Pool, along with the nearby 142-foot long slide, marks this as the pool for water activities, while the Oasis Pool, in the center of the longhouse compound, offers a more serene escape. For even more seclusion, you can rent a private Oasis Patio, which accommodates up to six. Towels are provided at both pools, and lifeguards are on duty. 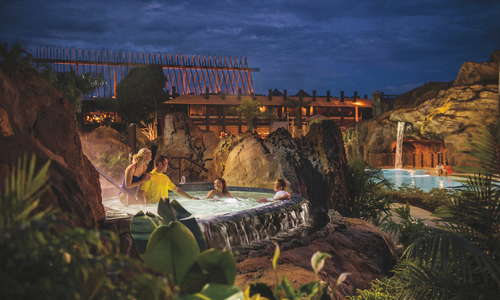 No onsite spa, but the full service Senses spa is just next door at the Grand Floridian Resort.

No gym on site, but guests can walk or jog to the Grand Floridian and use the workout center there.

Kona Cafe, in the lobby, offers a casual spot for breakfast, lunch and dinner. 'Ohana is the place for family food, fun and character breakfasts, with Hawaiian specialties on the all-you-can-eat menu, including sweet and sour chicken, shrimp, noodles and more. Staff organizes amusements during the meal, including coconut races and Hula dancing. But the main attraction is Disney's Spirit of Aloha Dinner Show, at Luau Cove, with entertainment from the Pacific islands, and another all-you-can-eat feast of pulled pork, ribs and roasted chicken. For dessert, if you have room, or as an afternoon cool treat, pop over to the Pineapple Lanai to sample the famous soft serve frozen pineapple treat, DOLE WHIP®.

YOU SHOULD KNOW Reservations and prepayment are required for the Spirit of Aloha, with fairly strict penalties for cancellations. Note the weather, because the event can be cancelled for rain storms or if it's too cool.

Trader Sam's Grog Grotto is adjacent to the lobby, and has indoor and outdoor seating. The Tambu Lounge, decorated with carved wooden posts and a thatched roof, offers a full bar plus snacks.

So long as Disney is your primary goal, the on-property transportation systems should be sufficient. The Polynesian Village is on the monorail line, is within walking distance of the Transportation Center, and is serviced by regular water taxis and launches. Buses take guests to all of the on-property parks and water parks, in addition to Disney Springs. If Universal or SeaWorld are on your itinerary, a car or ride share is a best bet.

If you grow weary of pulled pork, roast chicken and noodles, a quick hop on the monorail to the Grand Floridian or the Contemporary resorts opens up a wide array of eateries, from fine dining to fast food. Further afield, Disney Springs has more than 50 restaurants from which to choose.

The monorail or water taxis offer an easy way to bar hop, as there are at least a dozen watering holes in the resorts around the lagoon. Reached by car, ride share or taxi, or by bus, but that takes longer, Disney Springs offers bars and entertainment.

The laid back island vibe, fun pool and water activities, and the waterfront location on the Seven Seas Lagoon, puts you in a real tropical vacation mood. The monorail stop just outside the lobby means getting to the Magic Kingdom and Epcot are convenient and relatively speedy. 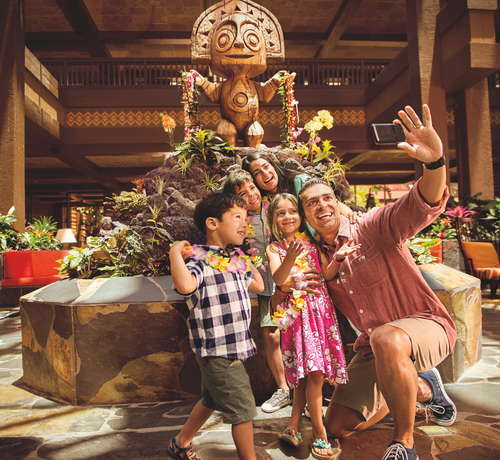 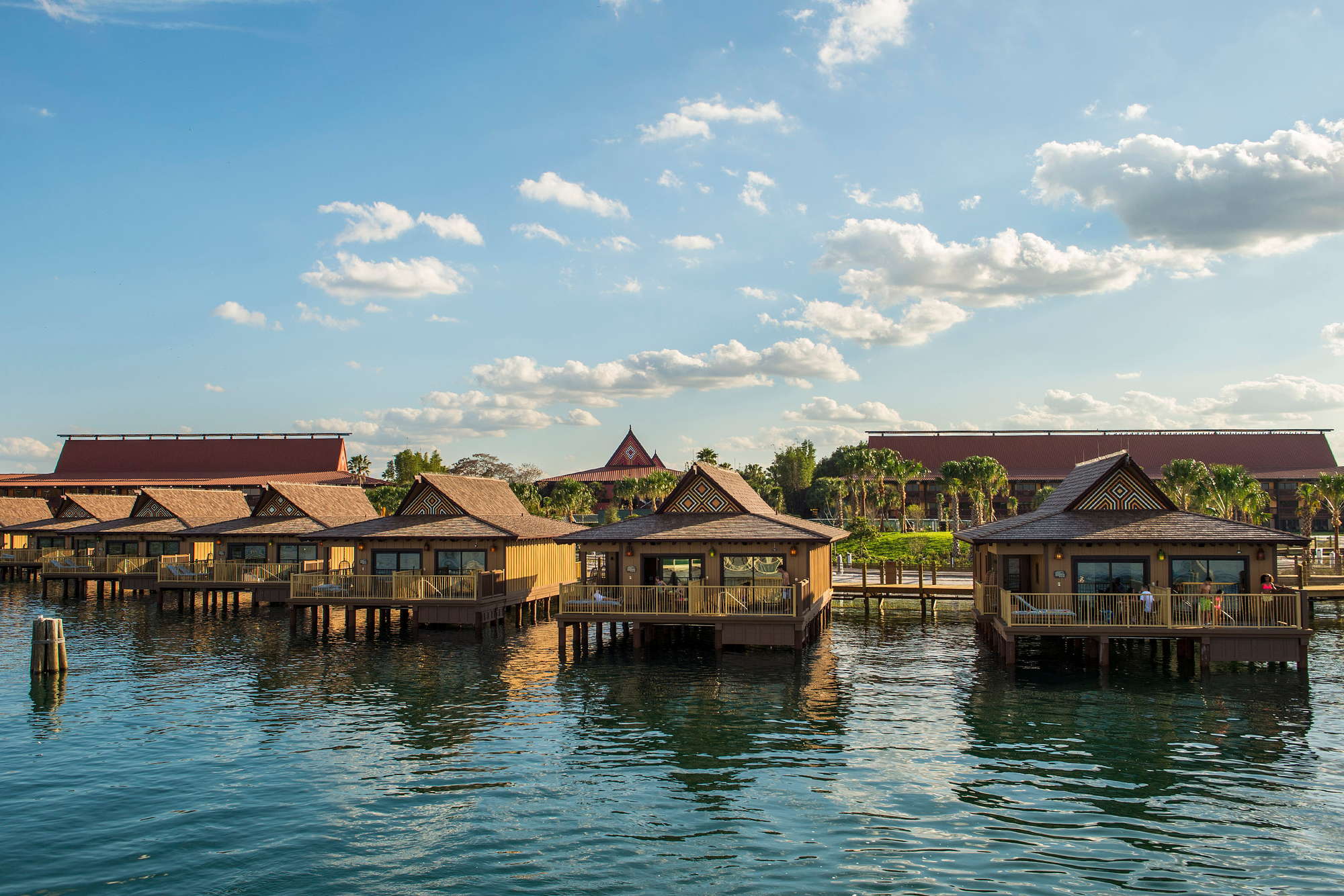 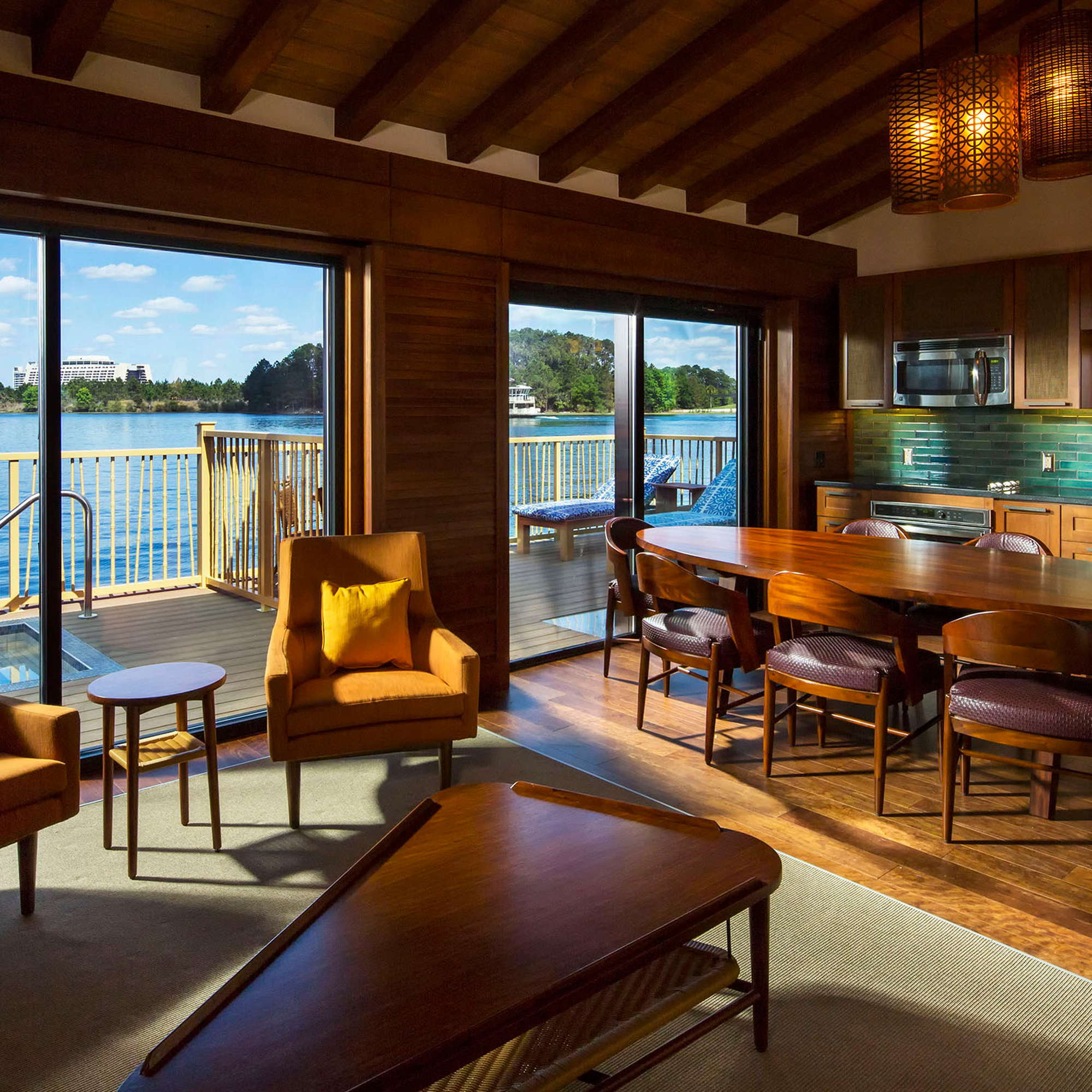 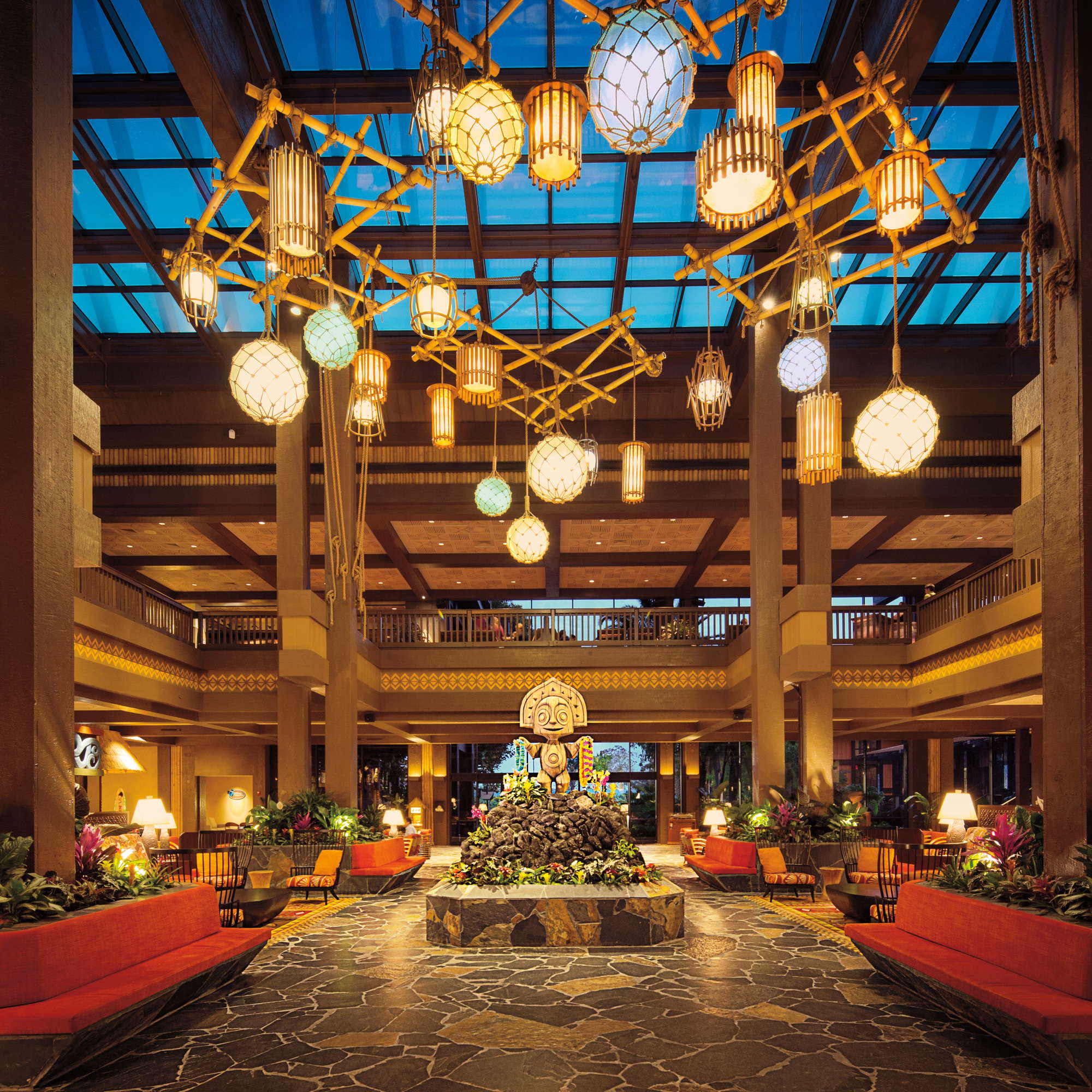 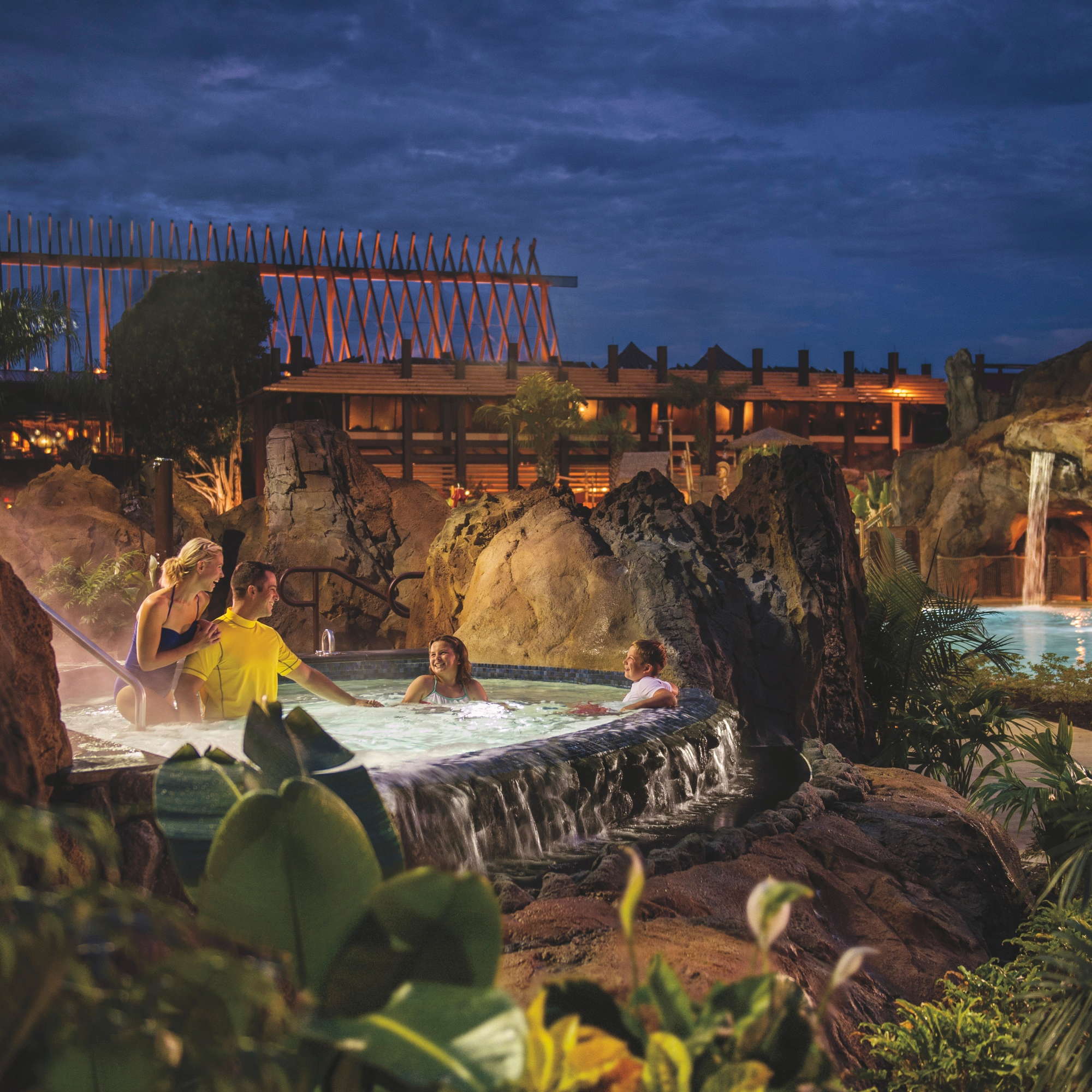