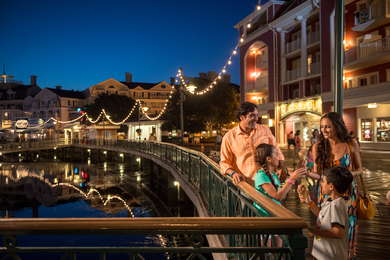 Harking back to Atlantic City in its heyday, the striking red and white hotel has a wood-floored lobby filled with potted palms and looks out on a classic waterfront promenade, where ferries and water taxis tootle about the bay, the smell of pretzels and popcorn hangs in the air, and hawkers call you to arcade games. The only thing missing is the gambling. And the Atlantic. But the promenade does meander around Crescent Lake, enticing guests out for a pleasant after-dinner stroll to watch Epcot's fireworks, or a morning walk to the back gate of Epcot, which saves a lot of time if you just want to see the architecture of the lands. Several eateries are just steps away from the hotel's front door. Rooms in the inn are pricey, as you pay for being this close to fun.

Traditional decor befits a resort that harks back to Atlantic City's 19th century heyday. Standard rooms have two double beds, with crisp white linens and a striped coverlet. Dark wood furniture contains storage drawers, and houses the large, flat-screen televisions. The reading lamps on the wall on each side of the bed are a great touch, but it would have been nice if both sides of the bed had bedside tables.

YOU SHOULD KNOW A waterfront room offers splendid views, particularly at night when the Boardwalk is lit up, but be aware, the constant whistles and toots from the boat traffic can be irritating. 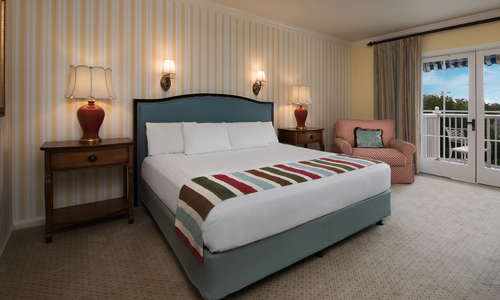 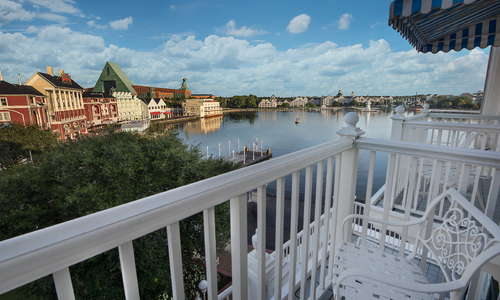 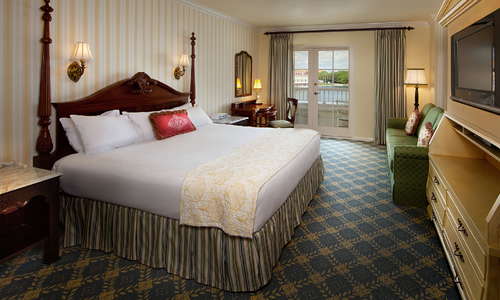 Double sinks in the beige marble topped vanity, which offers plenty of space for toiletries. The bath/shower, lined with more beige marble tiles, has a shower curtain.

The cream-painted, coffered ceiling soars above a lobby that could be straight out of the 1920s or earlier. A highlight is the glass-encased model of an old, wooden roller coaster. Massive, gold-framed portraits of old mansions line the wall above reception, while chandeliers cast a soft light that reflects off the polished wood floors. Potted palms, cream-painted pillars, overstuffed chairs, and cozy seating arrangements all invite guests to rest a while. 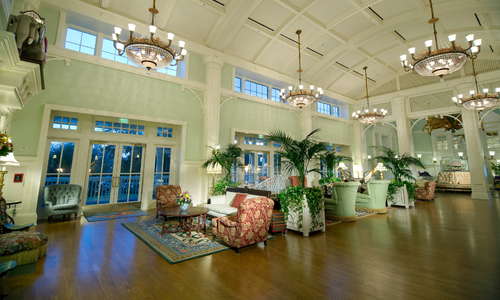 The Luna Park Pool at Boardwalk Inn resembles a turn of the last century amusement park, complete with a water slide disguised as an old fashioned wooden roller coaster. Kids enjoy being sprayed by statues of Dumbo. Adults seeking a quiet swim have two other pools from which to choose. 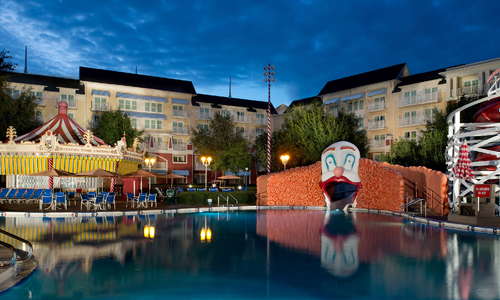 Muscles & Bustles Health Club next door at Boardwalk Villas offers exercise equipment from Cybex and Life Fitness, including treadmills, stair climbers, bicycles along with free weights and weight machines and a sauna for sore muscles.

The Inn's proximity to the Boardwalk itself means there are several dining opportunities within a few steps. Flying Fish offers a fine dining seafood experience, while Trattoria al Forno serves up Italian-style fare, and Big River Grille & Brewing Works serves pub favorites along with their own brews. ESPN Club specializes in exactly the sort of food you would expect, burgers, fries, nachos and more that can be eaten while watching sports on the dozens of screens.

For a quiet drink in an eccentric spot, pop into Belle Vue Lounge, just off the Inn's lobby, where the cozy atmosphere, comfy couches and a library feel just can't be beaten. Out on the Boardwalk, you have the ESPN Club on one end, for those who like sports with their beer, or, on the other end, Jellyroll, for dueling pianos and singalongs.

The boats offer excellent transportation if your focus is on Epcot and Hollywood Studios. To access other Disney Parks, or Disney Springs, you'll need to take the bus, or pop over to the Beach & Yacht Club and order a Minnie Van, Disney's ride-sharing collaboration with Lyft. Taxis and other ride sharing services are abundant. If exploring further afield is on your itinerary, you'll need a car to get to Universal or SeaWorld or Downtown Orlando.

The nearby Swan and Dolphin resorts (just a few steps away) offer two celebrity restaurants, Shula’s Steak House and Todd English’s Bluezoo. The Swan offers sushi and pan-Asian food. Character meals are served up along with breakfast and lunch at the Dolphin's Garden Grove, where buffet meals and a casual atmosphere make it perfect for families. The Beach & Yacht Clubs (across Crescent Lake) offer every thing from classic steaks at the Yachtsman Steakhouse, to a seafood feast and lobster rolls at the Crew's Cup Lounge. Or you can choose to venture farther afield, to Disney Springs (15-minute drive) where more than 50 eateries and watering holes cater to every taste.

On the Boardwalk (5-minute walk) choose between ESPN Club or Big River Grille & Brewing if you seek craft beers and ales. Shula's and Todd English's Bluezoo at the Dolphin Resort have lounges, in addition to Phins, the lobby lounge that serves cocktails, wine, and craft beer. Across Crescent Lake lie the Beach and Yacht Clubs, where Martha's Vineyard serves wine by the glass or bottle, and the Ale & Compass and Crew's Cup lounges mix cocktails, along with beers, and wine.

You can't beat the place for charm, with its old-fashioned but richly decorated lobby, or for location, right on the Boardwalk with its restaurants and entertainment, all within an easy walk to Epcot or a quick boat trip to Hollywood Studios. 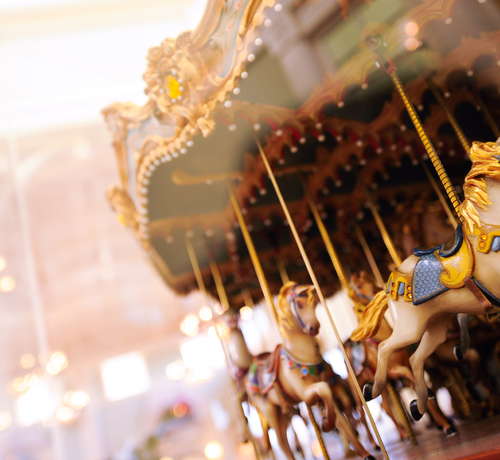 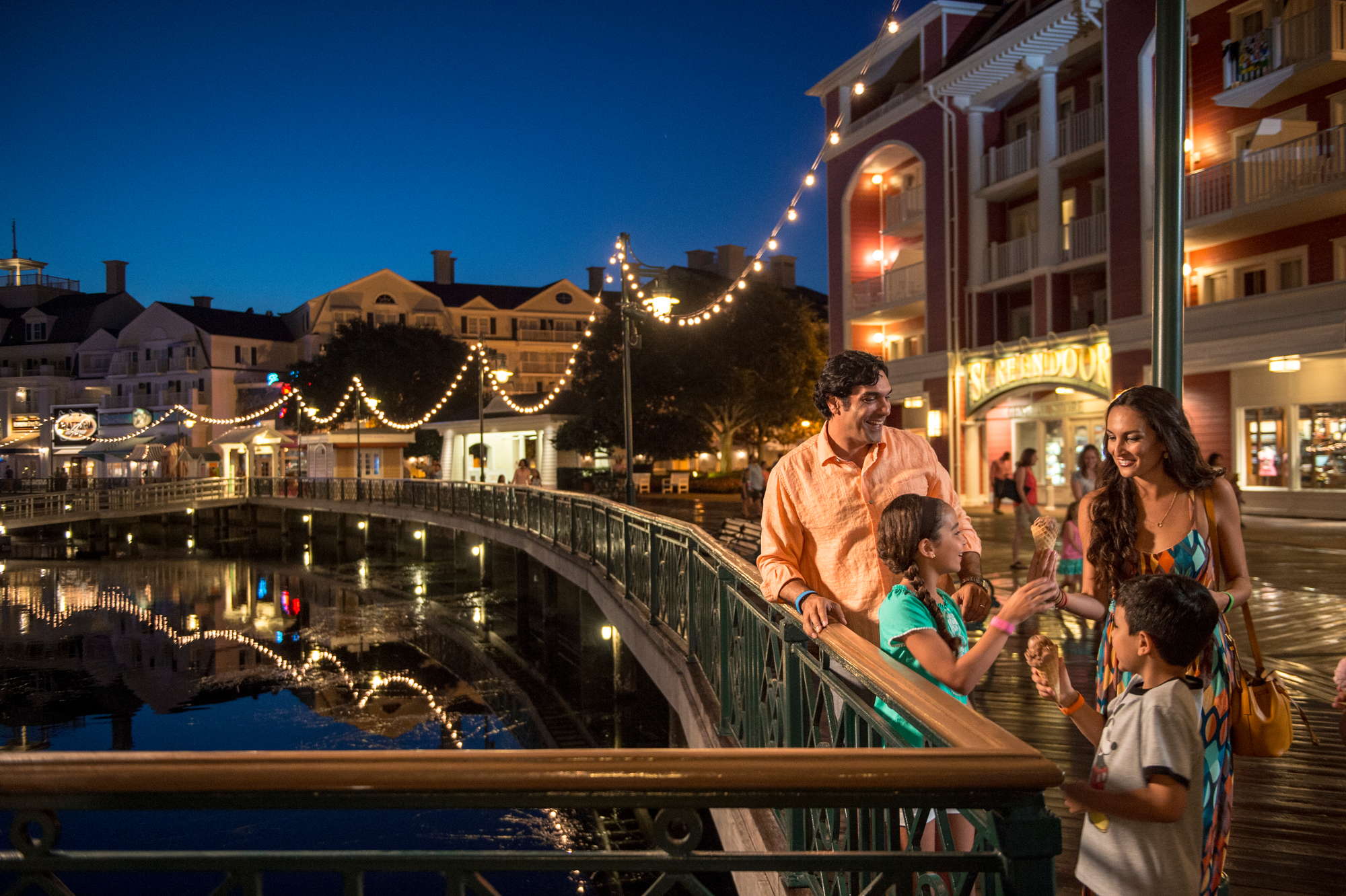 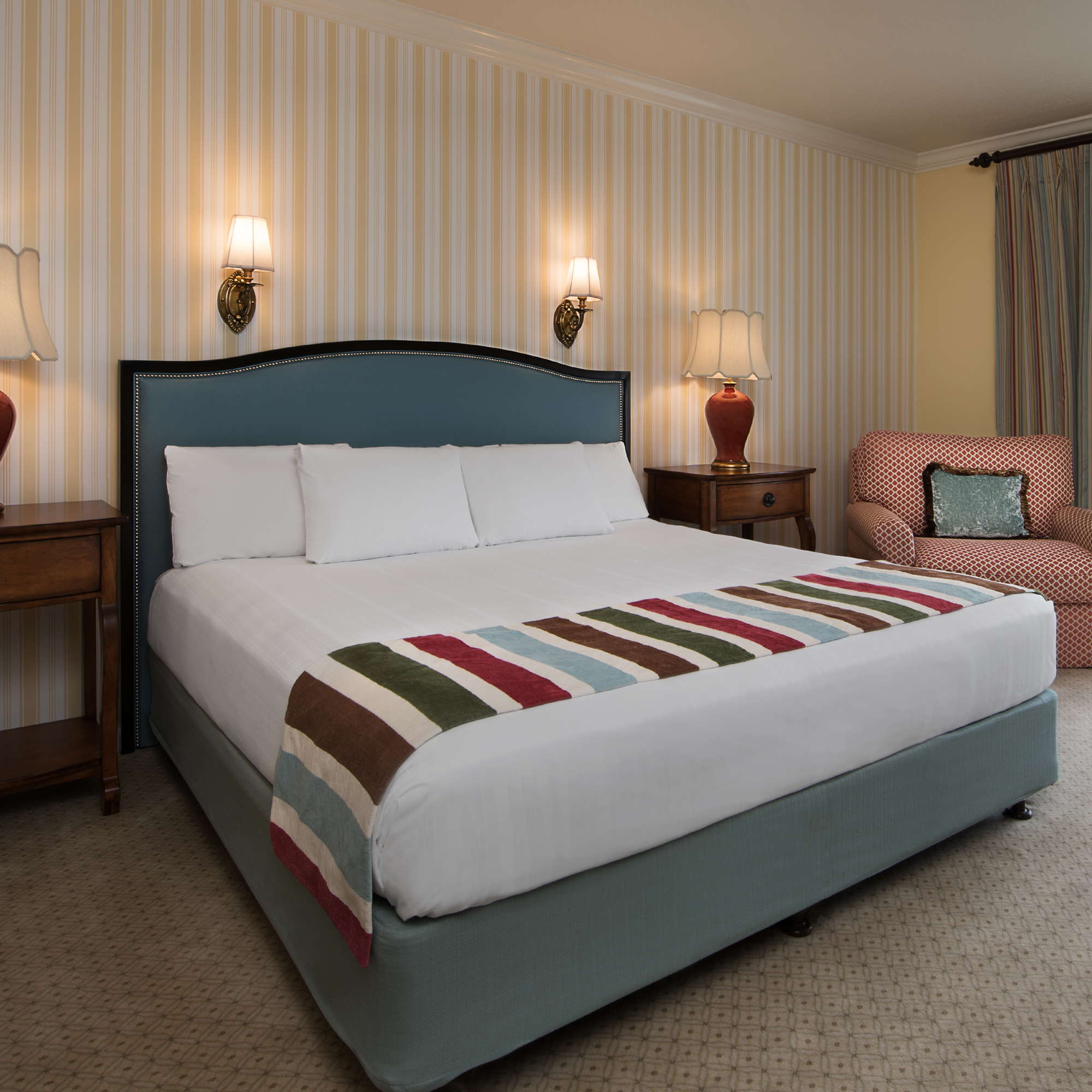 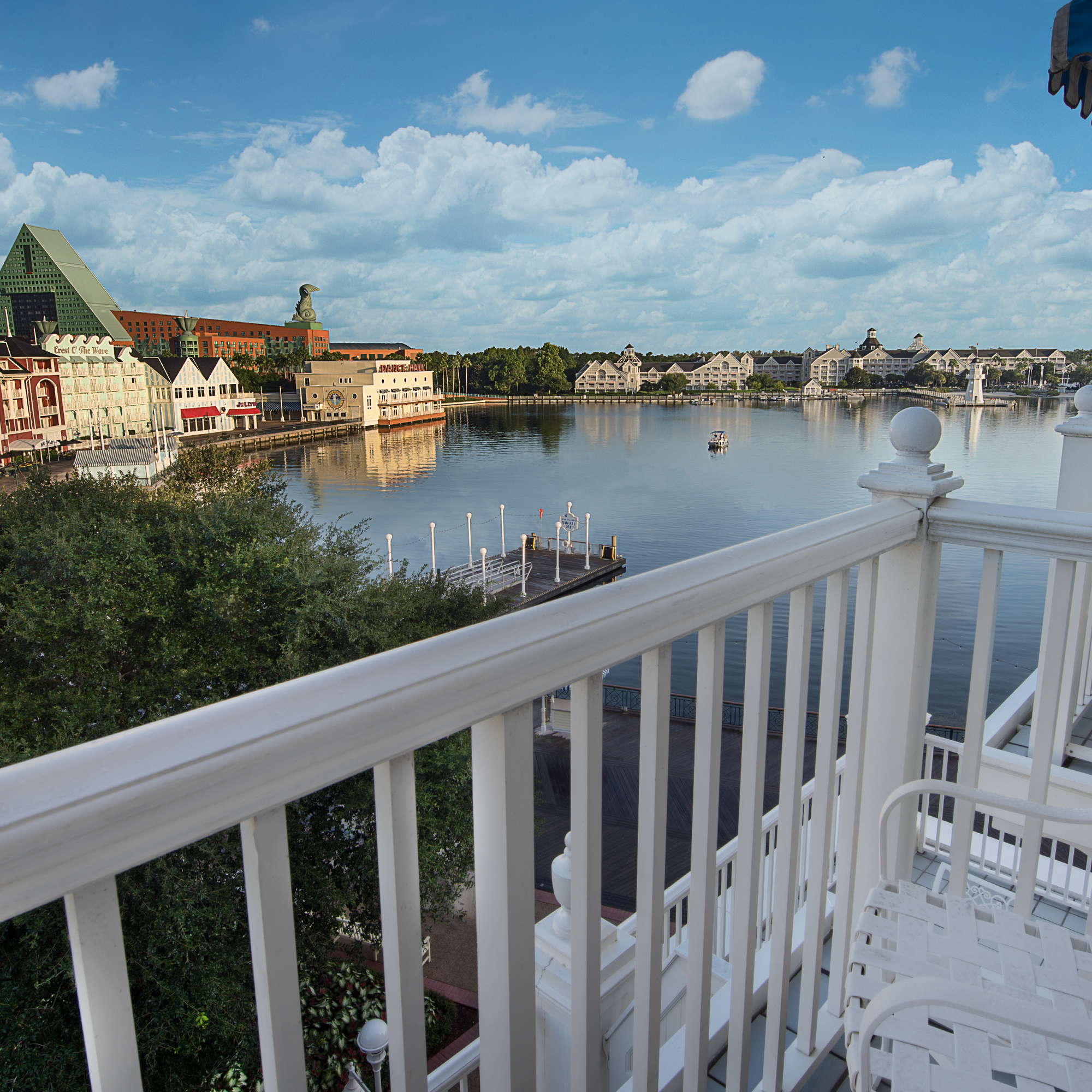 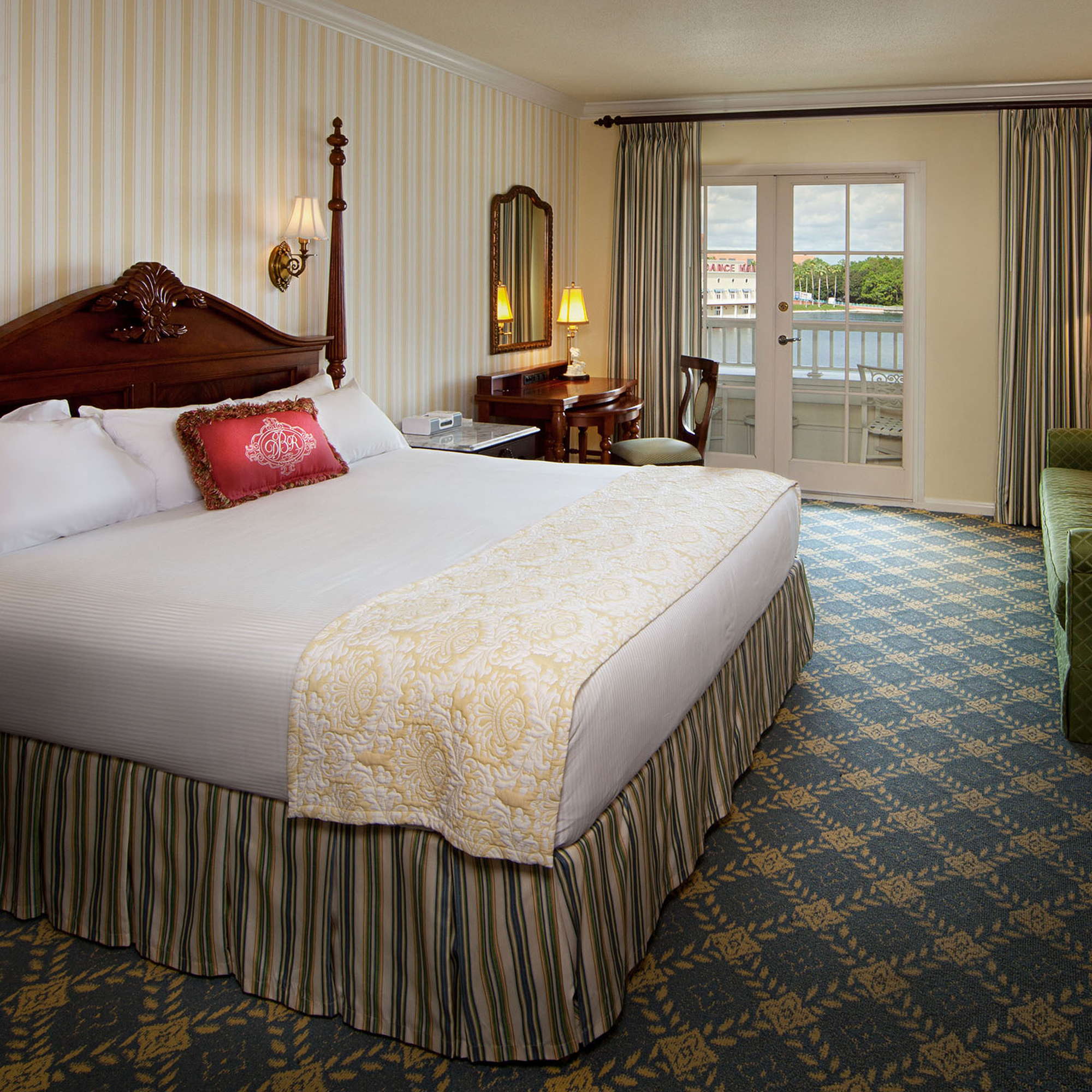 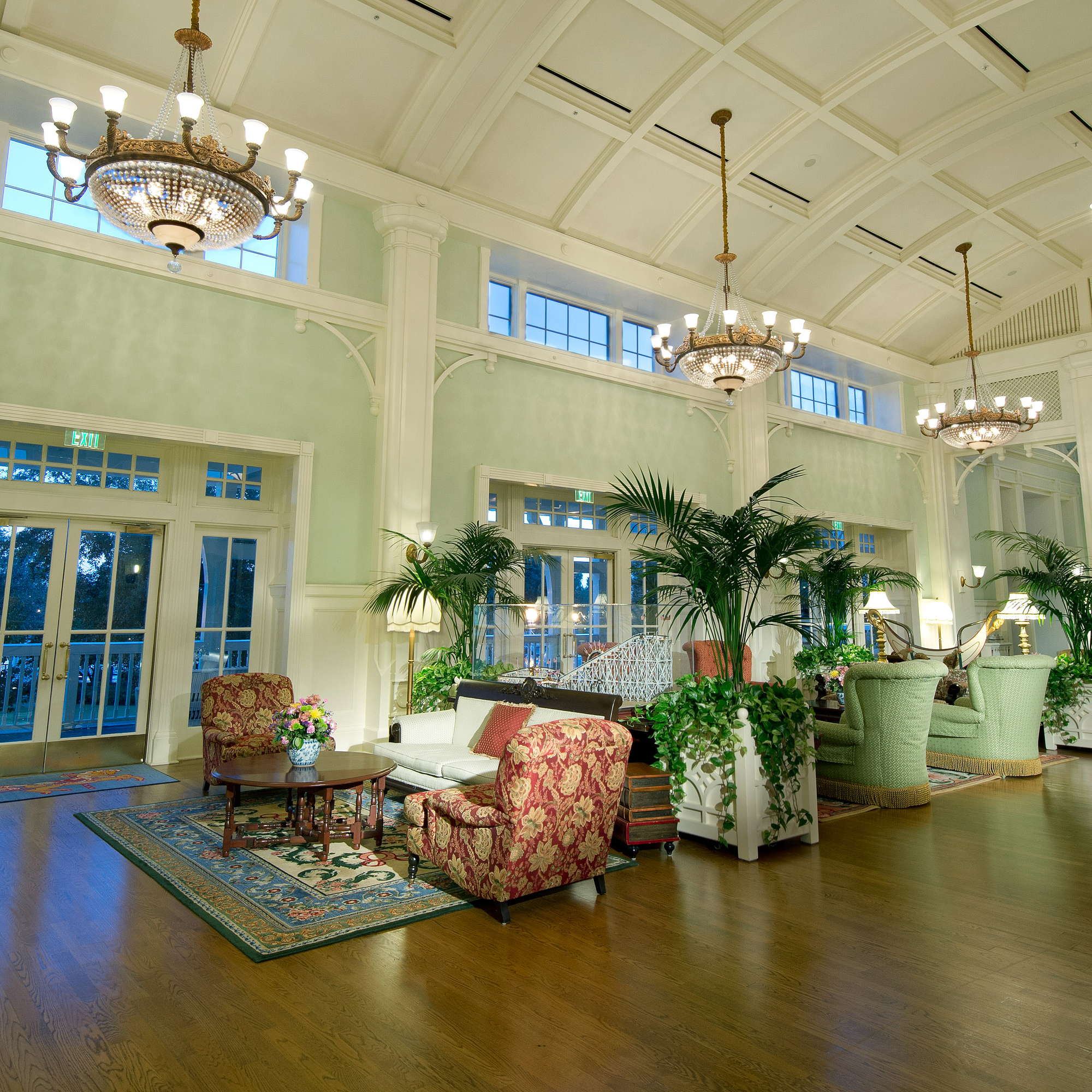 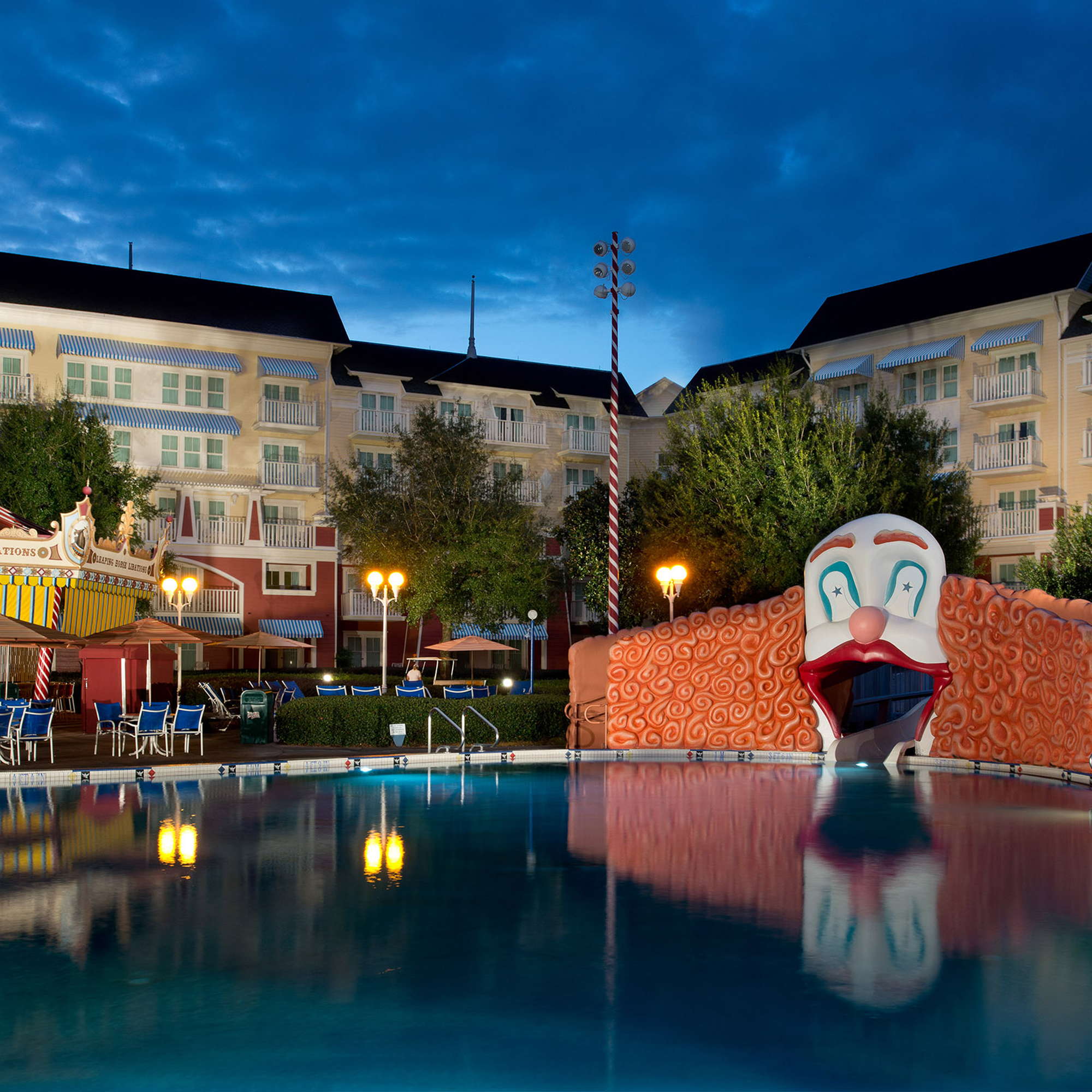