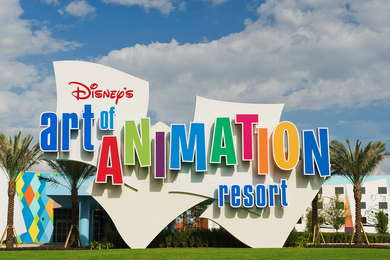 This three-story resort is a kid's version of paradise: each of its four wings features cartoon images from Finding Nemo, Cars, The Lion King, or The Little Mermaid, and in-room linens and decor match the wing's theme. The Cars wing offers a Cozy Cone Motel complete with a Cozy Cone pool. The Finding Nemo wing has the largest swimming pool at Walt Disney World, with a giant Mr. Ray and Crush the Turtle. Suites sleep up to six and have a separate bedroom and two baths. One of the beds, in a rather cartoonish way, turns into a table during the day. Other surprises include high-tech drawing boards that animate with scenes from the cartoons as you pass.

YOU SHOULD KNOW This kids' paradise is filled with kids, thousands of them, whether at lunch, or in the pool, or trying to get through the lobby or onto the bus to the Magic Kingdom. Be prepared.

You'll think you've been transported into an animated feature when you enter the rooms in this themed resort, which were decorated in the spirit of "let nothing remain unpainted." Characters from the four theme cartoons cover walls, furniture, carpets, curtains, bedding, and even bathroom tiles, and like the cartoons from which they draw, primary and neon colors rule.

YOU SHOULD KNOW The storage space is limited, making it hard for a family to stay organized during a stay of more than a night. Also, sounds from neighboring rooms can be bothersome. And, check out the bed sizes in the rooms you are booking. Standard rooms have double beds, not queens. 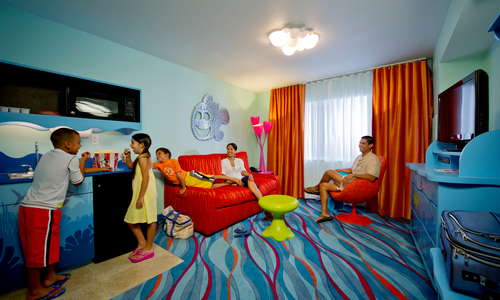 Continuing the whole body slam of cartoon images, the bath and shower tiles in The Little Mermaid rooms feature dramatic underwater themes and a mermaid on the shower curtain, while those in The Lion King wing display the scarlet African sky at sunset. In the Finding Nemo rooms, brown tiles are enlivened by a shark-covered shower curtain.

The cartoon theme rules the wildly colorful and large lobby, with black and white animation sketches from Disney/Pixar films covering the walls and seating, along with frames from the films. Adjacent to the lobby lie the even more colorful Ink and Paint Shop souvenir and gift shop, and the Landscape of Flavors food hall, making for a very vibrant and often crowded area.

YOU SHOULD KNOW The buses pick up and drop off at the lobby, which means guests staying in lodgings furthest from the lobby must walk an additional 10 minutes to catch the bus, which can take more than 20 minutes to reach a park.

The resort contains three pools: The Big Blue Pool, based on Finding Nemo, lives up to its name, containing 308,527 gallons, which makes it the largest pool at Disney World. It also features an underwater music system; The Cozy Cone Pool, inspired by Cars, has very funny traffic cone cabanas; Flippin' Fins Pool, is filled with characters from The Little Mermaid. 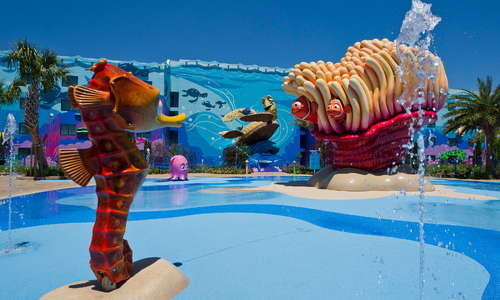 No gym on property, but a jogging trail, and rental bikes, help maintain your cardio goals.

Breakfast, lunch, and dinner are served at Landscape of Flavors, right next to the lobby, which consists of five smaller restaurants offering pizzas, sandwiches and other fast food dishes. Breakfast fare includes eggs, sausage, bacon, Mickey waffles and more. Light snacks are available at the Drop Off Pool Bar. Or, if you prefer pizza in your room, the resort offers a pizza delivery service.

YOU SHOULD KNOW None of the restaurants at Landscape of Flavors offers table service. It's all cafeteria-style counters and carrying trays of fast food to the table, which is fine for picky-eater kids, but may get wearying for family members who have more sophisticated palates.

Beer is available at Landscape of Flavors.

YOU SHOULD KNOW Frazzled parents might take respite in the availability of a cold brew, after a busy day park hopping and wrangling kids.

Even though you are on Disney property, and thus eligible to use the various modes of transportation free of charge, the time spent getting from one place to another by bus from this resort in the southern portion of Disney World could eat up a chunk of your day. A car or ride share might be the more efficient option. A new transportation option, the Disney Skyliner, a high-tech take on ski gondolas, connecting this resort with Hollywood Studios and Epcot, is set to open in 2019. Until then, guests must either wait on long lines for buses, or drive.

The dining, shopping and entertainment complex at Disney Springs (15-minute drive) is the closest opportunity for different eateries at this fairly remote resort. Options include the three-story PaddleFish, a modern take on the American traditional paddle boat, where seafood is king and the outdoor rooftop terrace offers striking views of the lagoon and the entertainment at the Springs. Nearby, Raglan Road is an Irish Pub owned by celeb chef Kevin Dundon, featuring refined Irish fare and lots of music and dancing; The Polite Pig, owned by the James Beard nominated Petrakis family, local restaurateurs, serves up Southern influenced American fare; Morimoto’s, an Asian Fusion eatery owned by, and often visited by, famed Japanese chef Morimoto; and many more, from fine dining to simple burgers.

Among the restaurants and cafes at Disney Springs, opportunities for drinks abound. From the Indiana Jones-influenced Hangar, to lounges in most of the restaurants, you can sample local craft beers, sophisticated wines, cocktails, high-end sake, Guinness on tap, local bourbons and whiskeys and endless other libations.

This kids' paradise is massive fun for the youngsters in our lives, many of whom grew up with the characters in the four theme films. Nothing says Disney more clearly than a bed that turns into a colorful, cartoon-like table, sitting in a room that vibrates with bright color. However, parents and grandparents can take pleasure in watching the enjoyment of the children, and react in quiet astonishment to the over-the-top decor. The price is right, the rooms and suites, while not spacious, offer room enough for the whole family. The pools are huge, and the cafeteria-style food hall serves up no-fuss food, with enough variety to please even the pickiest eater. 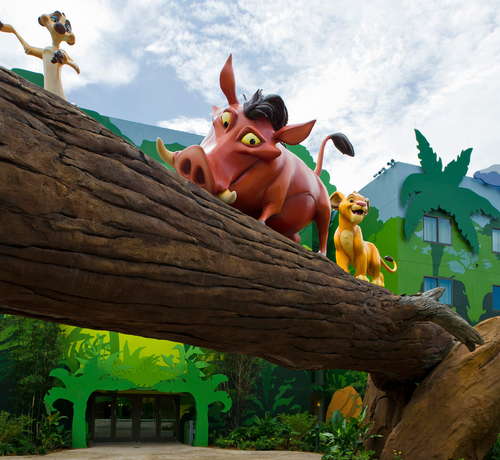 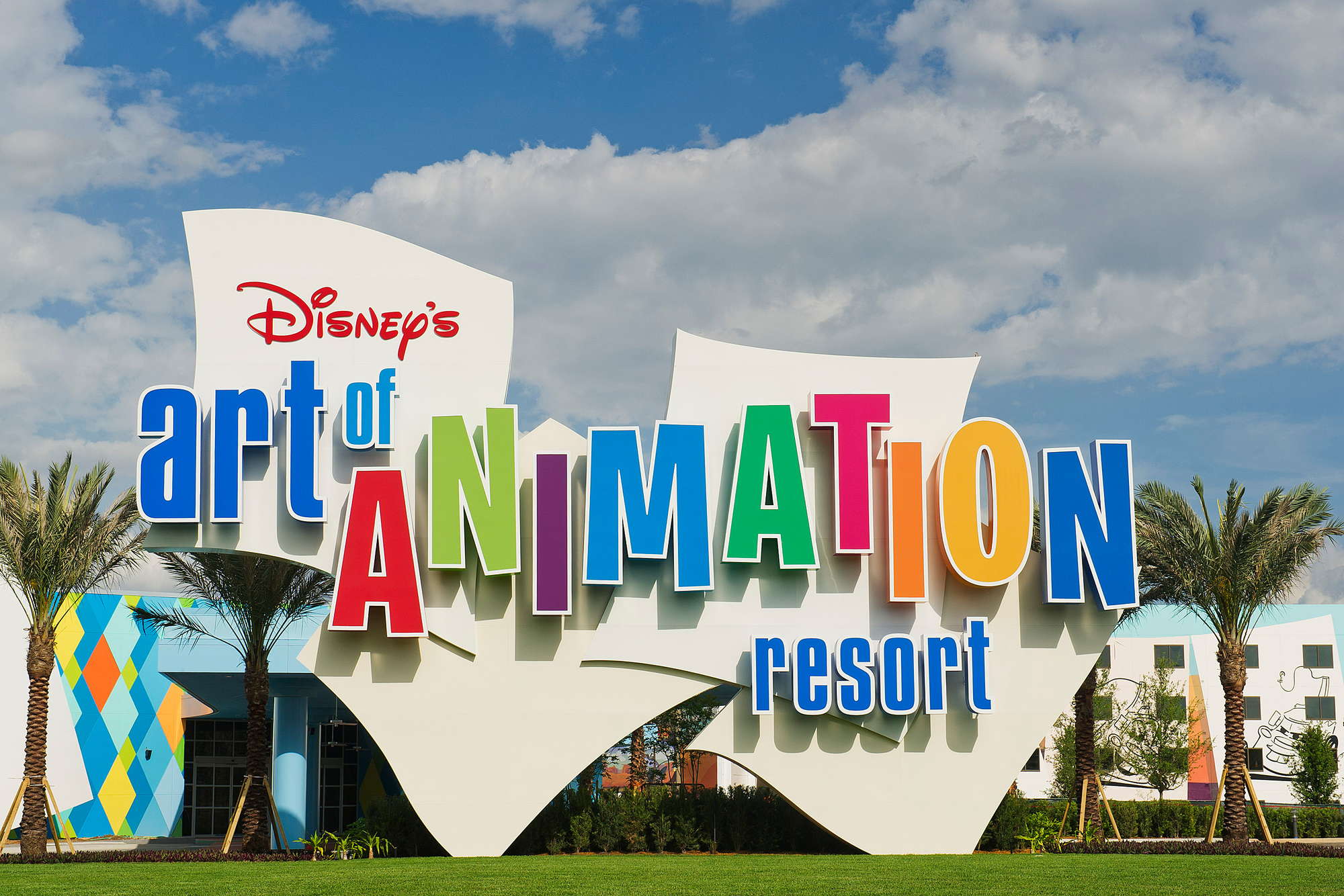 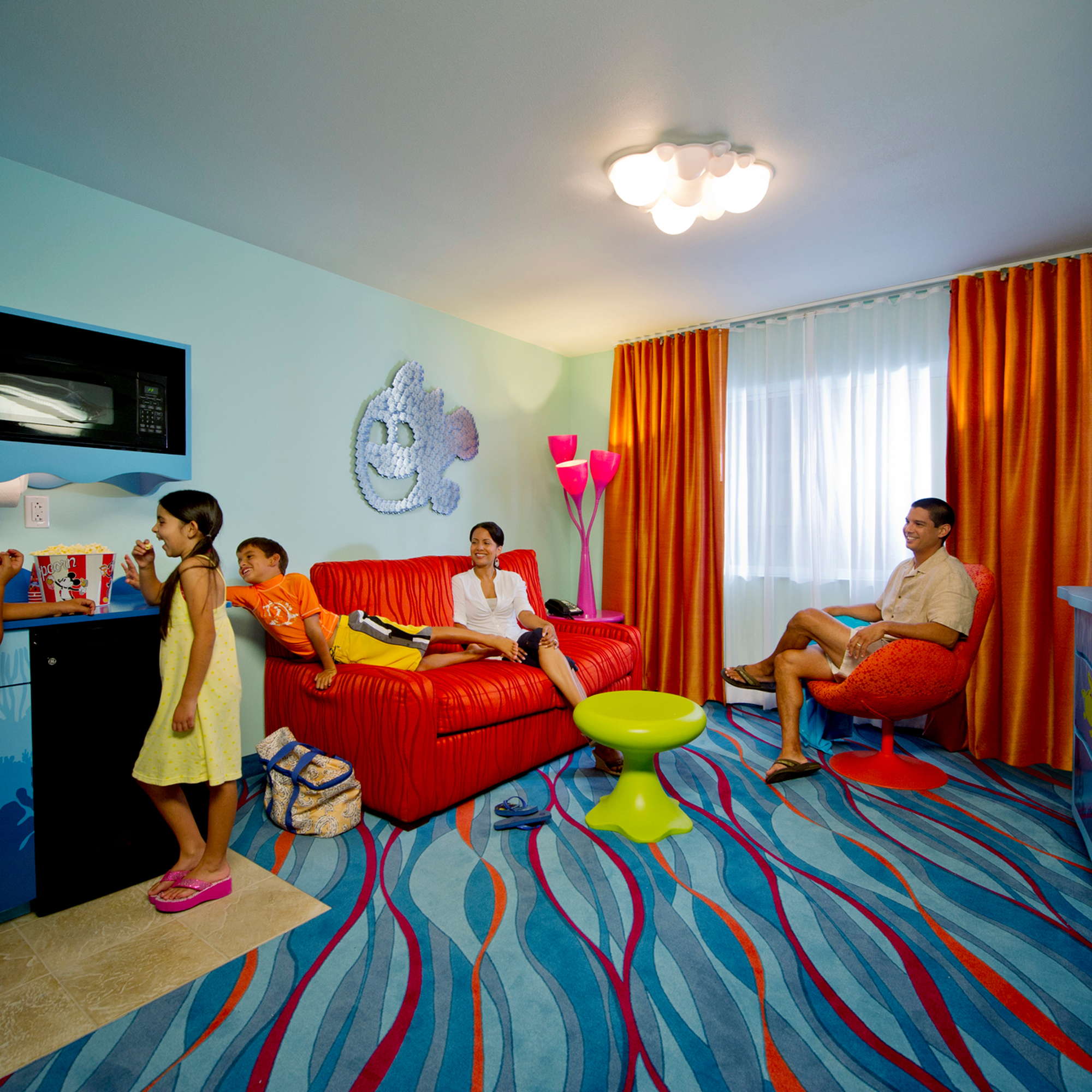 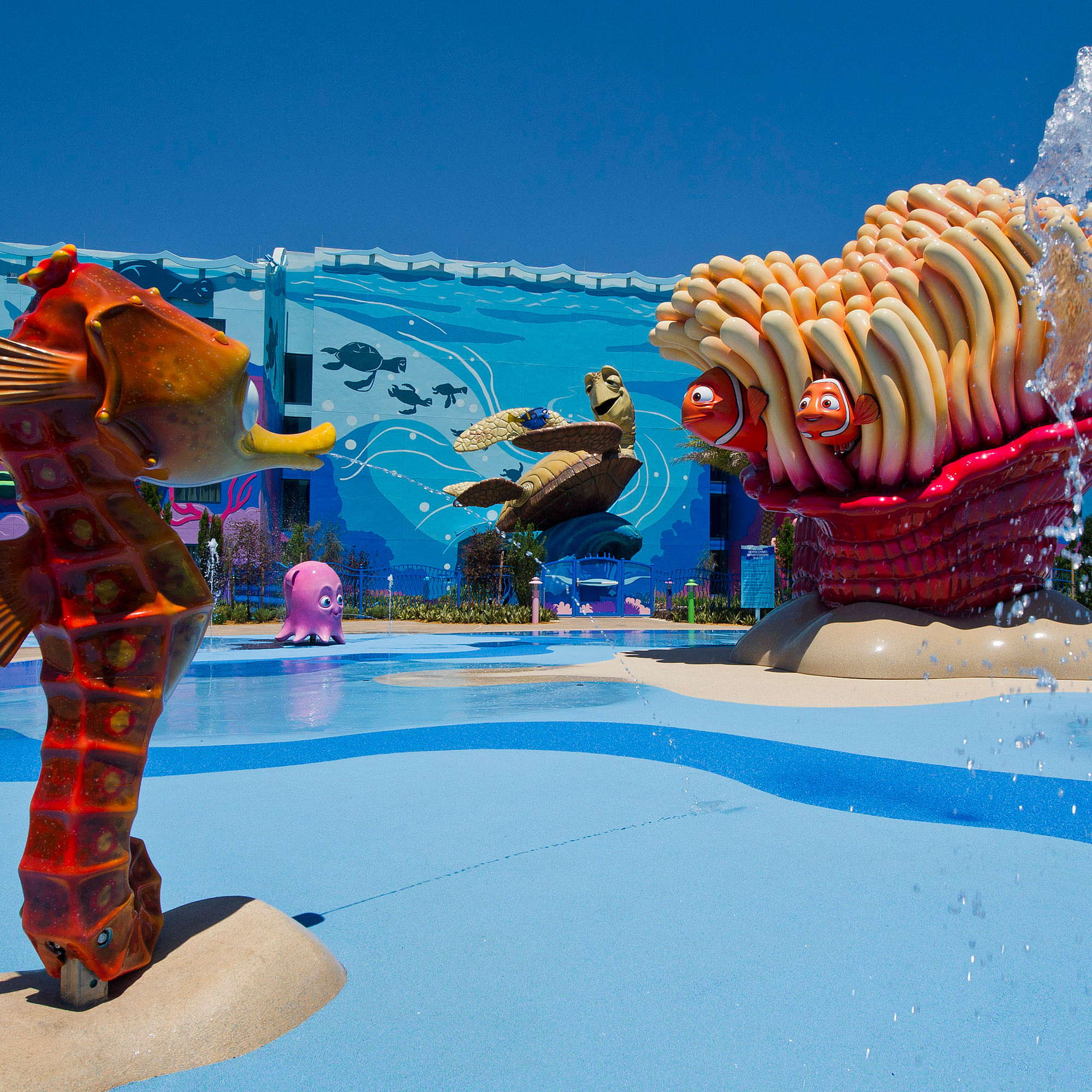