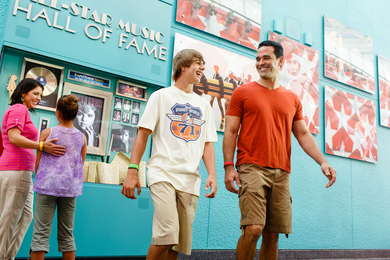 Music rules in this colorful, value-priced. family-friendly Disney resort, from the huge, gold letters announcing the name. Resembling a Florida beach hotel of the 1950s, the resort has a guitar-shaped pool and balcony railings that resemble notated musical staffs. Each section of the resort rocks to a different genre of popular music: country, jazz, rock and roll, calypso, and show tunes. The food court provides convenient fare from breakfast to dinner, and compact rooms are decorated to match the musical theme of their section of the resort. The resort has a food court, a shop and a game room, pizza delivery and laundry facilities. The Disney transportation system is included, as are other perks, such as MagicBands, and early park entry.

The standard hotel rooms are small, with two double beds and spartan furniture, similar in layout and decor to the other All-Star resorts. The family suites sleep up to six and offer two bathrooms, a kitchenette and two 27″ flat screen TVs.

YOU SHOULD KNOW The suites may sleep six guests, but of the six, two sleep in a queen bed, and four sleep on pullouts: a sofa, a sleeper chair, and a sleeper ottoman. 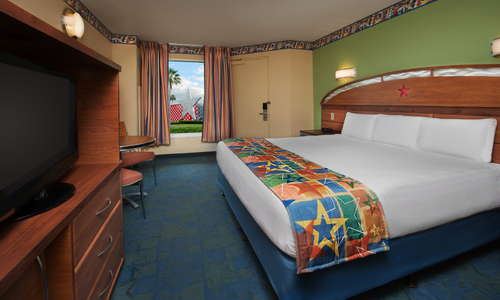 A utilitarian bathroom, with a single-sink vanity, and a shower/bath with a curtain. The toilet and bath are separated by a door from the vanity, so at least two people can use the area at the same time.

A functional lobby, called Melody Hall, is decorated in the All-Star star-spangled theme, along with musical notes to indicate the resort's theme. The food court, shop and arcade lead off the lobby, making it a busy place. 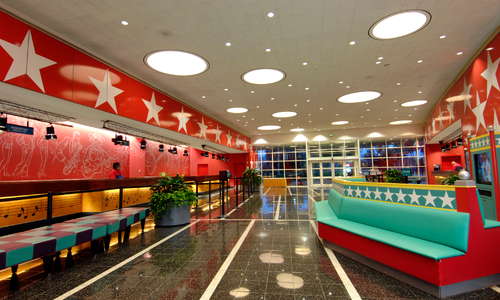 Two swimming pools, one shaped like a guitar, one like a piano keyboard, add to the musical ambience. The guitar-shaped Calypso Pool features Donald Duck and his Caballero pals who shoot water from the central fountain. Toddlers enjoy the nearby kiddie pool, while adults might enjoy the relative serenity of the piano shaped Piano Pool. Towels are provided and lifeguards are on duty. 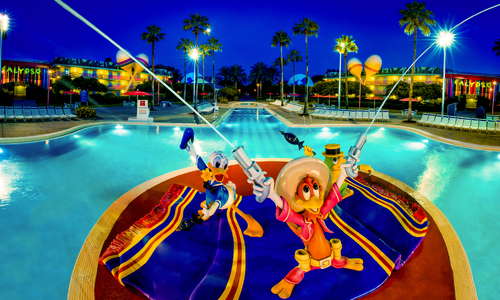 The large Intermission Food Court offers fast food--pizza, chicken, sandwiches, burgers and more along the same line--in addition to drinks and desserts. If you can't be bothered with the crowds, there's always pizza delivery.

If you are concentrating on Animal Kingdom, or even Magic Kingdom, the bus will get you there, eventually. The buses at these remote resorts are often full, and you may have to wait for the next one. A car or ride-share service would be more efficient, and necessary if you plan to venture to Universal, SeaWorld or anywhere outside Disney World.

If you are weary of fast food and want a complete change of pace, Boma at nearby Animal Kingdom Lodge (8-minute drive) is a treat for the whole family, particularly at breakfast. The beauty of the lodge itself, with its soaring thatched roof, multi-story fireplace, and the giraffes and zebras just outside the window, is worth the few minute trip by bus. Boma offers an excellent buffet of African-influenced food, along with American favorites. The servers all come from different African countries and are there to tell you all about the food and their homes. For an even wider choice of food, Disney Springs (16-minute drive), with 50 restaurants, from full service fine dining, to plain American burgers, can't be beaten.

The Animal Kingdom Lodge (8-minute drive) has several lounges that offer full bar service, plus the chance to savor South African wines. Disney Springs (16-minute drive) has a wide choice of watering holes, from Morimoto Asia's rooftop sake bar, to Raglan Road's Irish pub, to Art Smith's Homecomin' where you can do some down-home whiskey sippin'.

Like the other All-Star Resorts, you get a clean room for a decent price, many of the perks that staying on property bring, and music that might bring back a memory or two from a parental or grand-parental past. 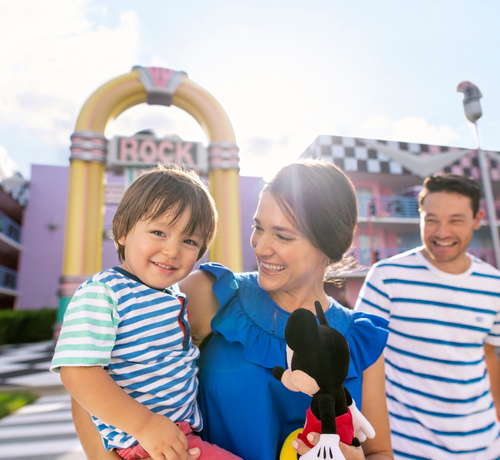 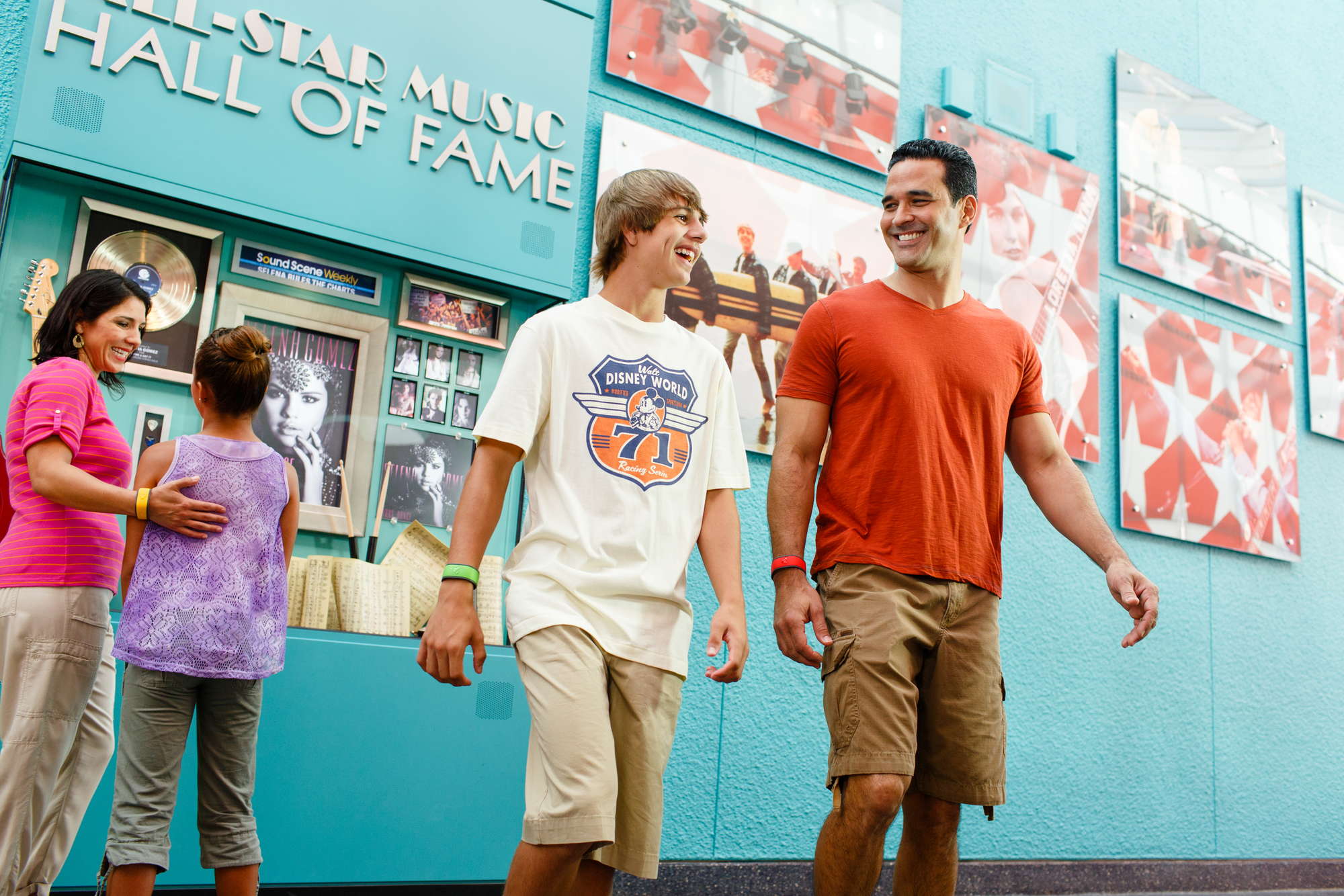 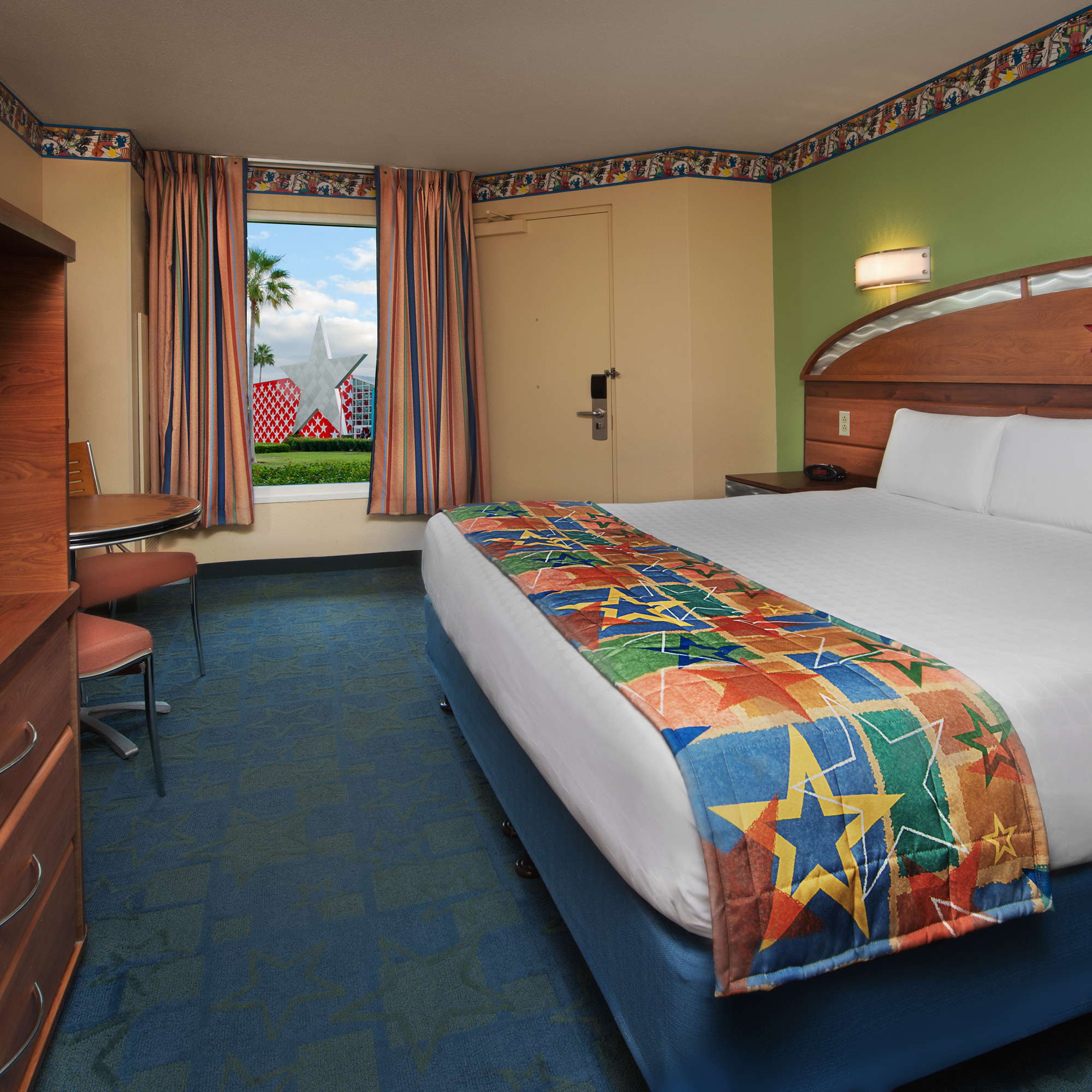 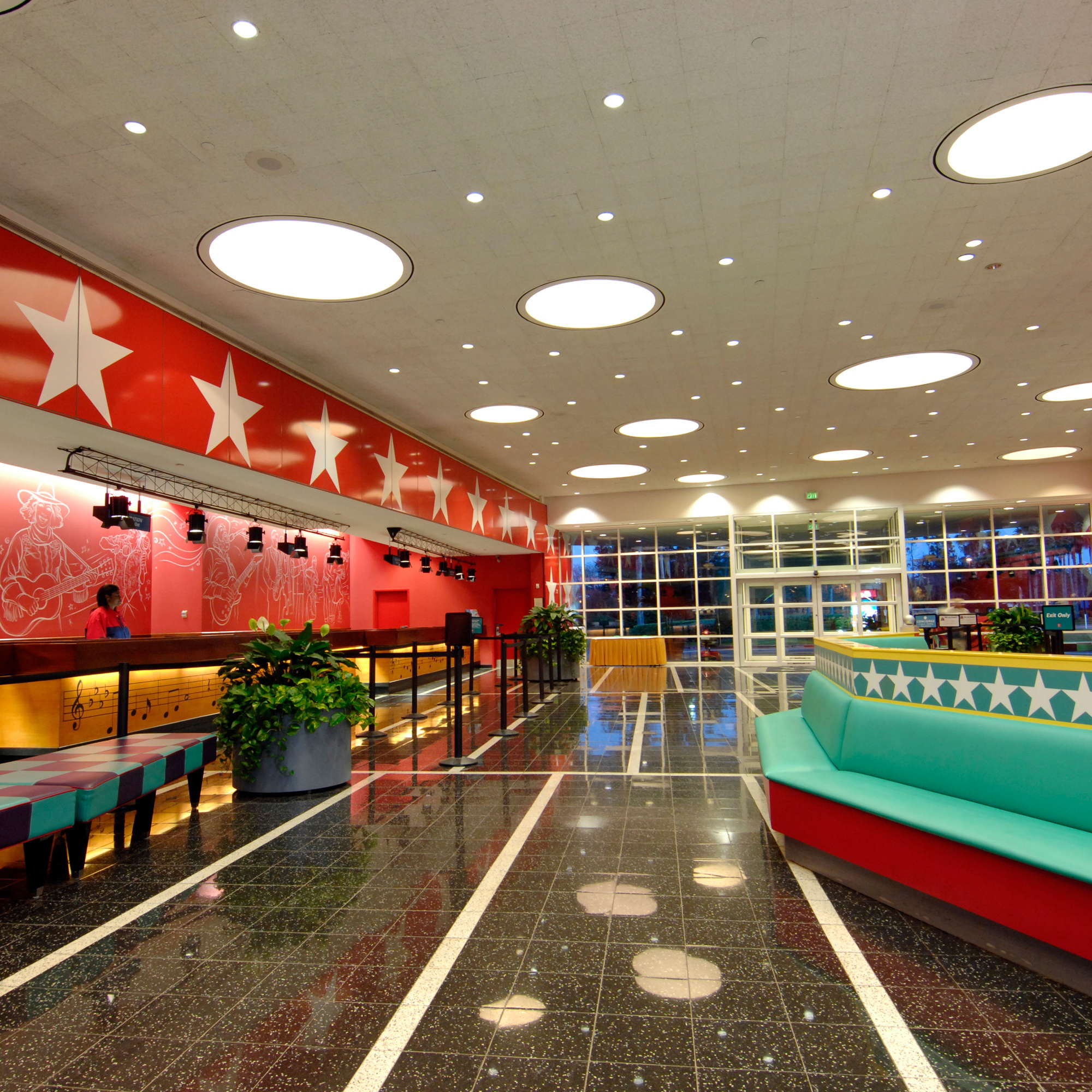 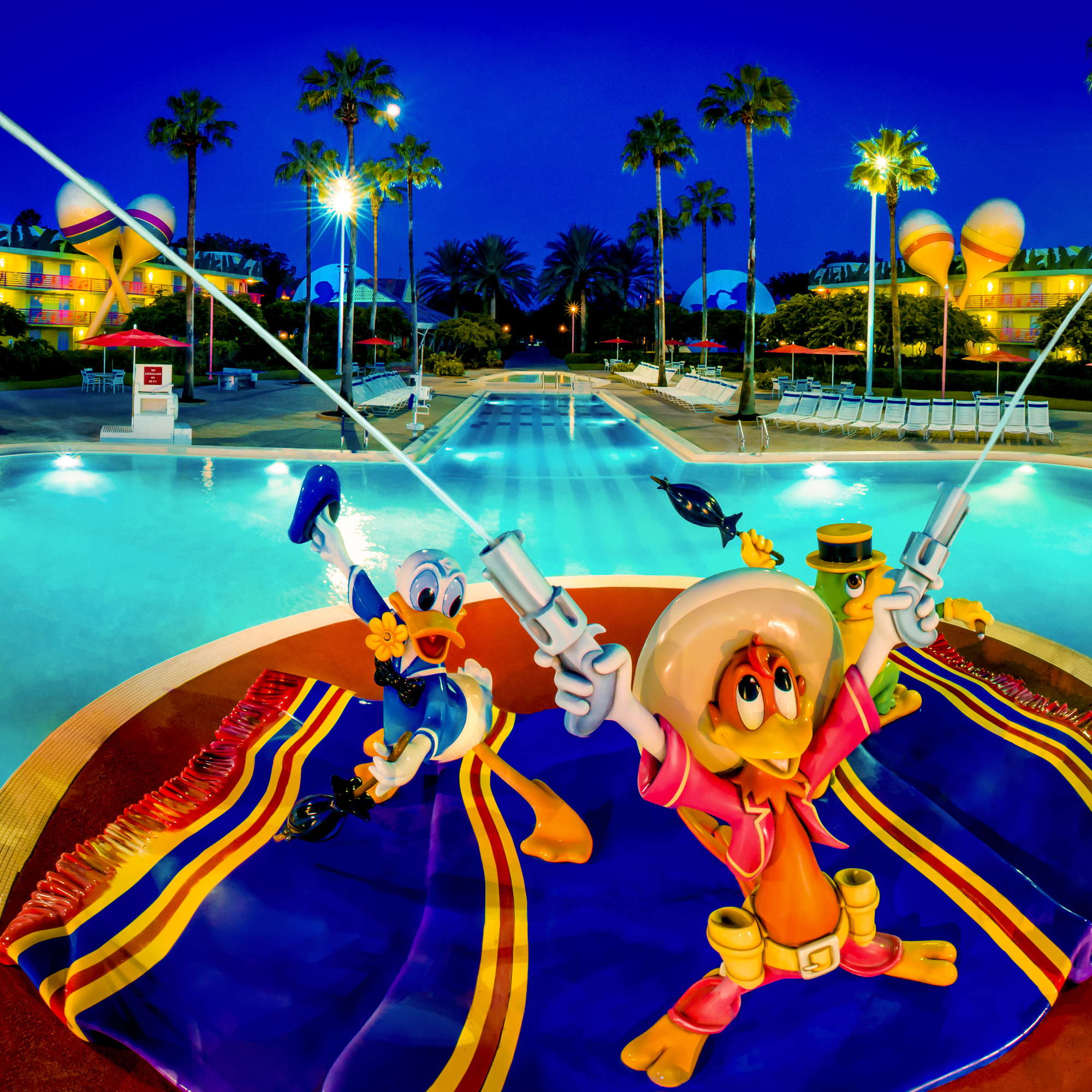