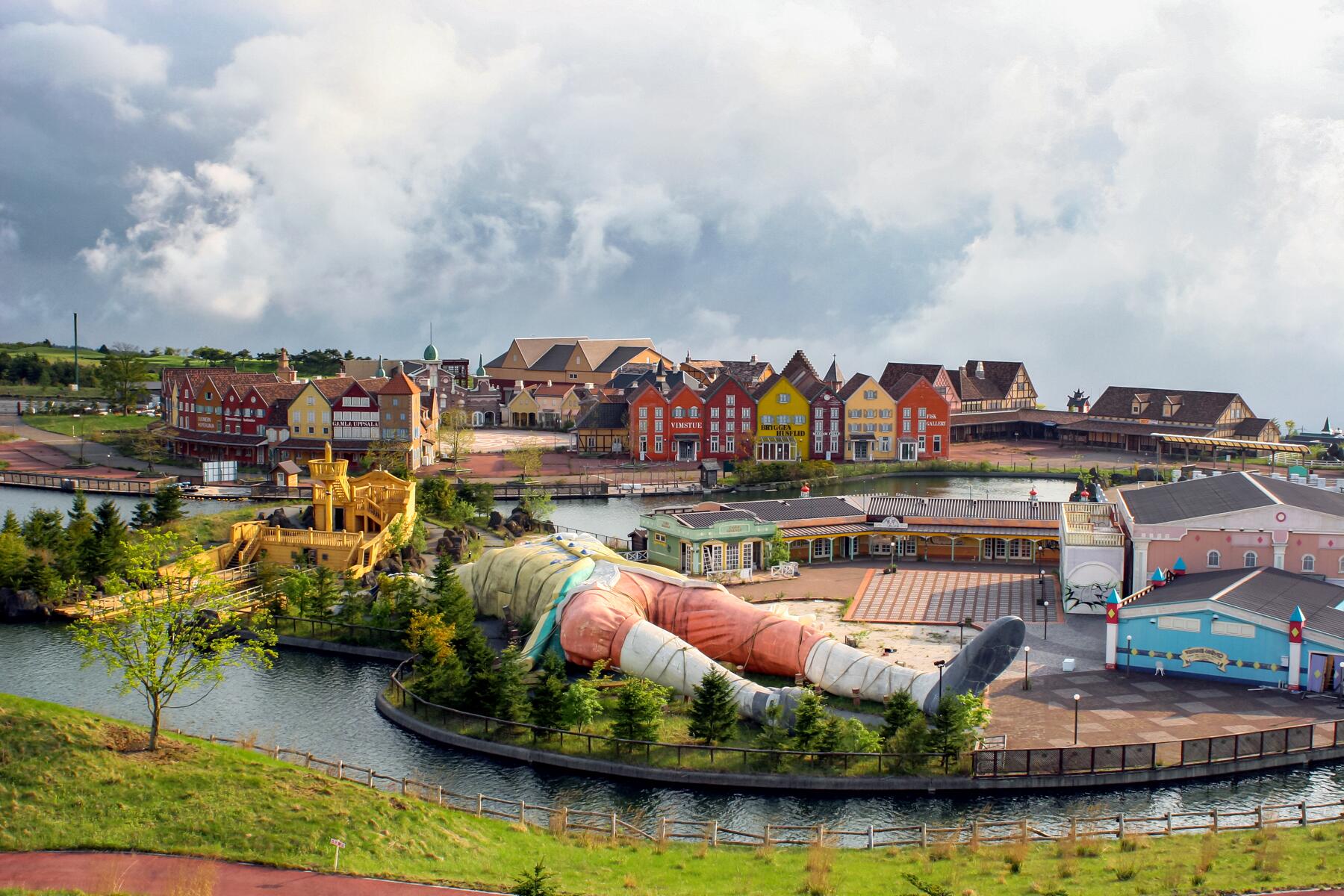 Play nice to infinity and beyond.

Attractions at Hollywood Studios have been a bit sparse in recent years as Hollywood Studios undergoes a massive multi-year renovation that will bring two new themed lands and new rides and attractions. The first of the new themed lands, Toy Story Land opened on June 30, 2018 (Star Wars Galaxy’s Edge will follow in 2019). Toy Story has been beloved by children of all ages since it premiered more than 20 years ago. Now kids (and kids at heart) can be part of that world as they are “transformed” to the size of a toy and join Woody, Buzz, and Jessie in Andy’s backyard as honorary toys. 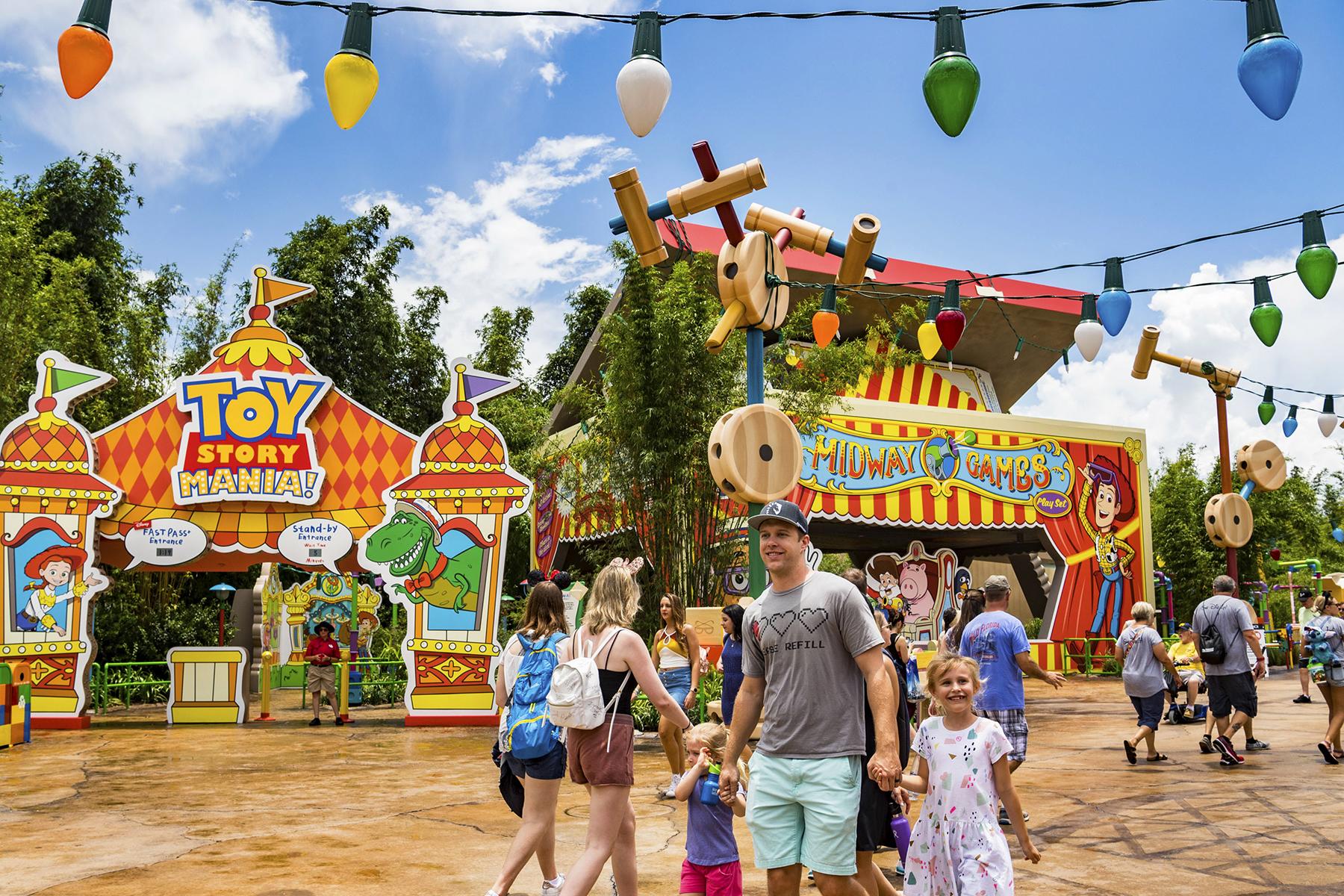 Toy Story Land is designed to transport you into the movie and does this by recreating Andy’s backyard. It’s as if Andy was playing in the backyard and left his toys out for you to join. Tall Tinker Toy lamp posts strung with massive Christmas lights line walkways dotted with Lego and Lincoln Log benches. Rex perches atop a Jenga block tower. Green army men appear throughout. And if you look carefully you can even see the fence to Sid’s yard. 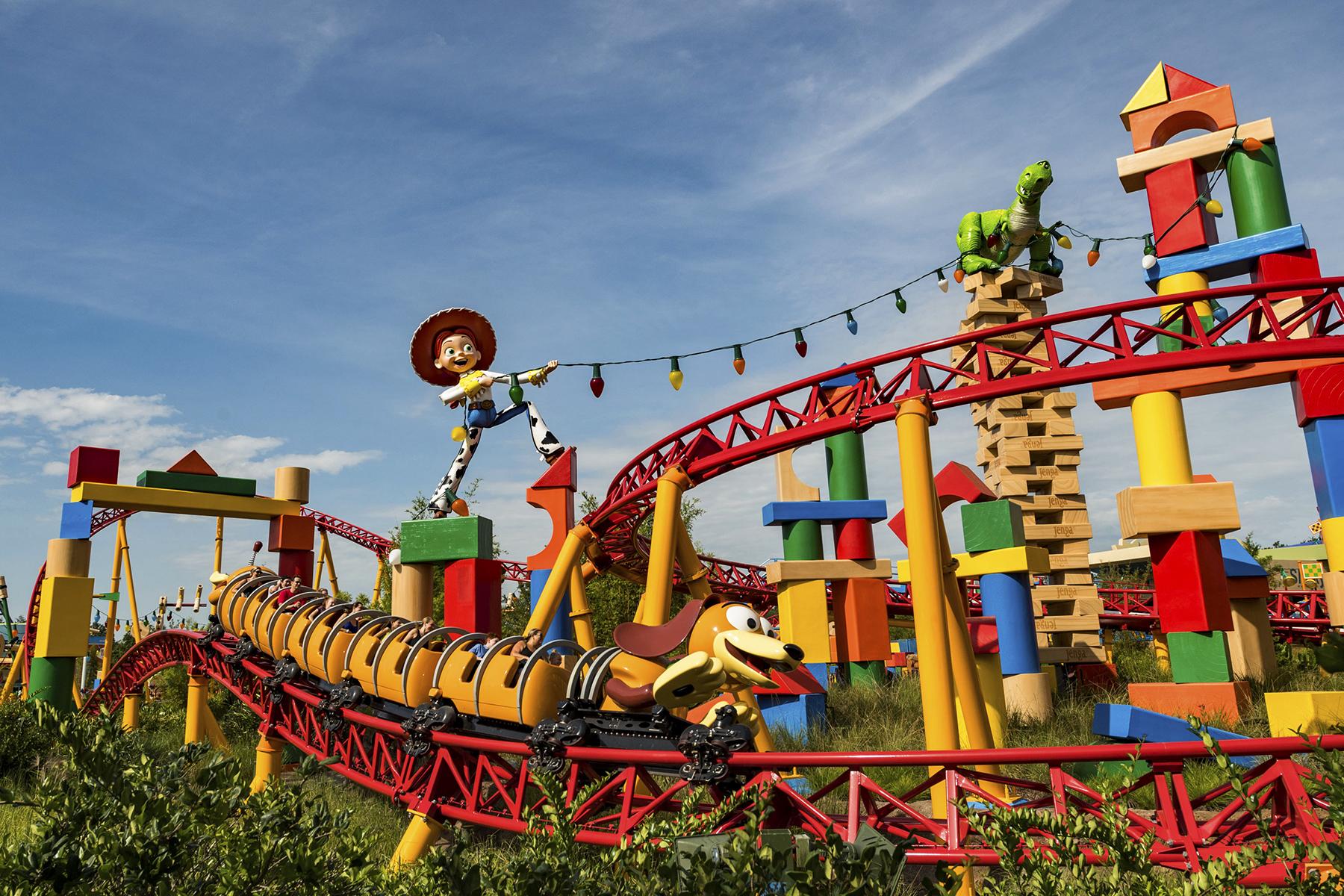 Andy built a roller coaster out of a dash and dodge roller coaster kit and then replaced the coaster car with Slinky Dog. Slinky Dog Dash is Disney’s first dual-launch coaster and hits the sweet spot of family coasters—it’s not too intimidating for kids and not too boring for adults. Small kids might be nervous when looking at it, but it’s a nice smooth ride and even the big hill isn’t that scary. It comes to a stop in the middle and relaunches with a spring-like motion, sending you into a series of bumps that are pretty appropriate when you consider you’re sitting inside a giant slinky dog. 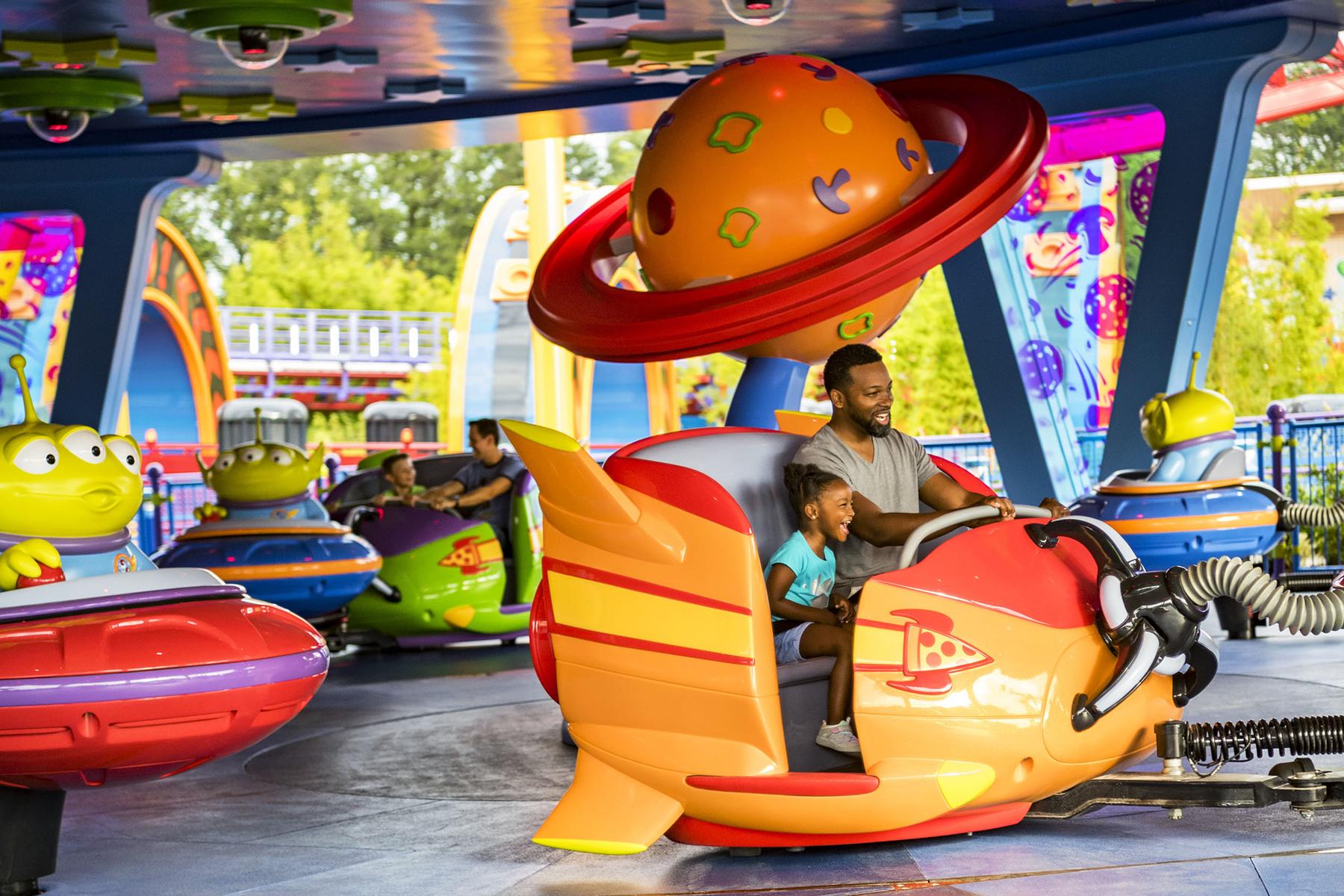 Avoid “The Claw” as you whirl through a playset Andy won at Pizza Planet. Seated inside a flying saucer piloted by one of the Toy Story Aliens, you will spin and whip through the Pizza Planet galaxy. This ride isn’t as spinny as the Tea Cups in Magic Kingdom, but if you’re especially prone to motion sickness, you can watch from a viewing area to the side of the playset. 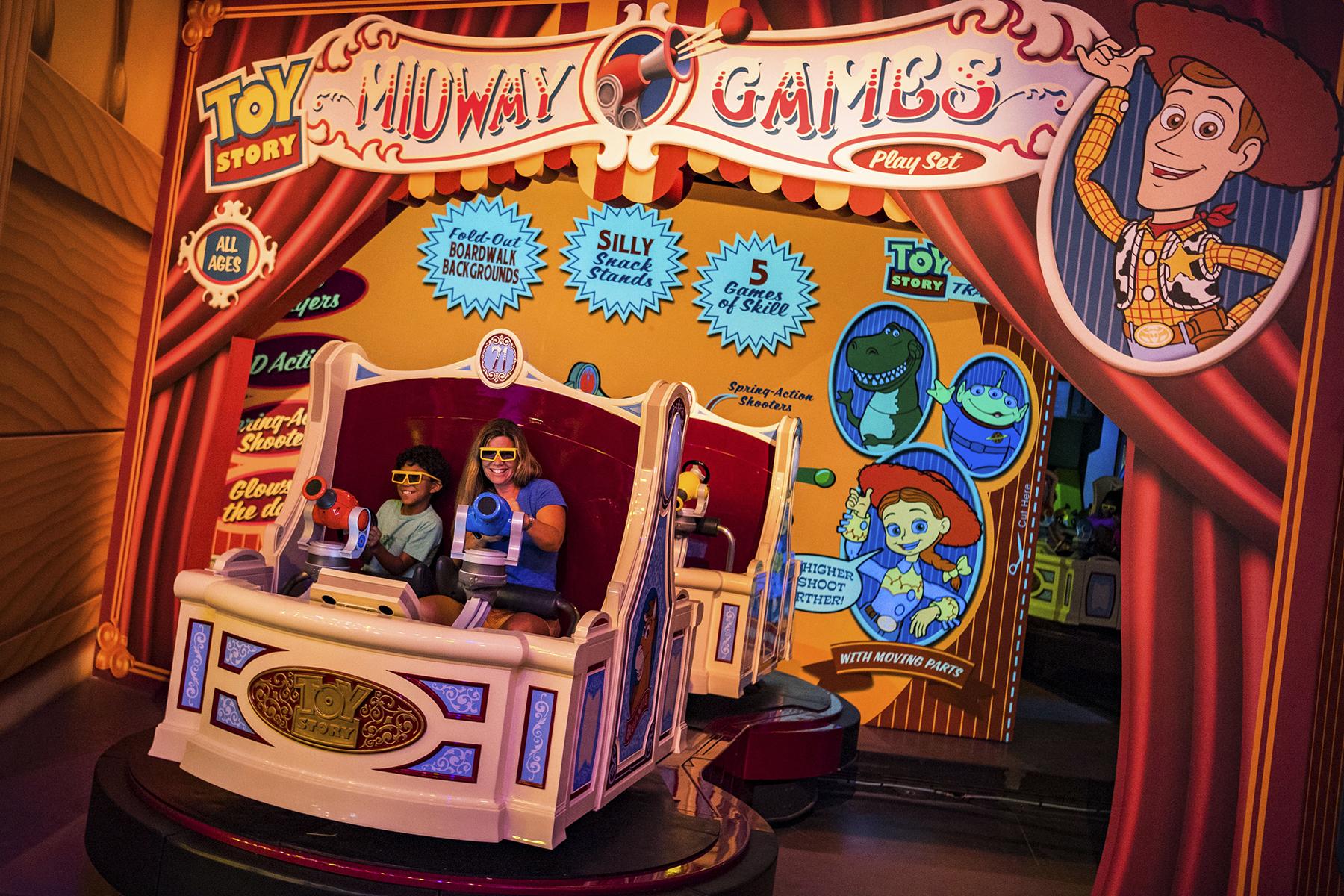 This ride isn’t new—it’s been a favorite at Hollywood Studios for years—but it does have a new entrance inside Toy Story Land and a third track to accommodate more guests. The new, brightly colored entrance is the box that Andy’s Midway Mania game came in and you wind through games and game pieces, crayon drawings, and more. 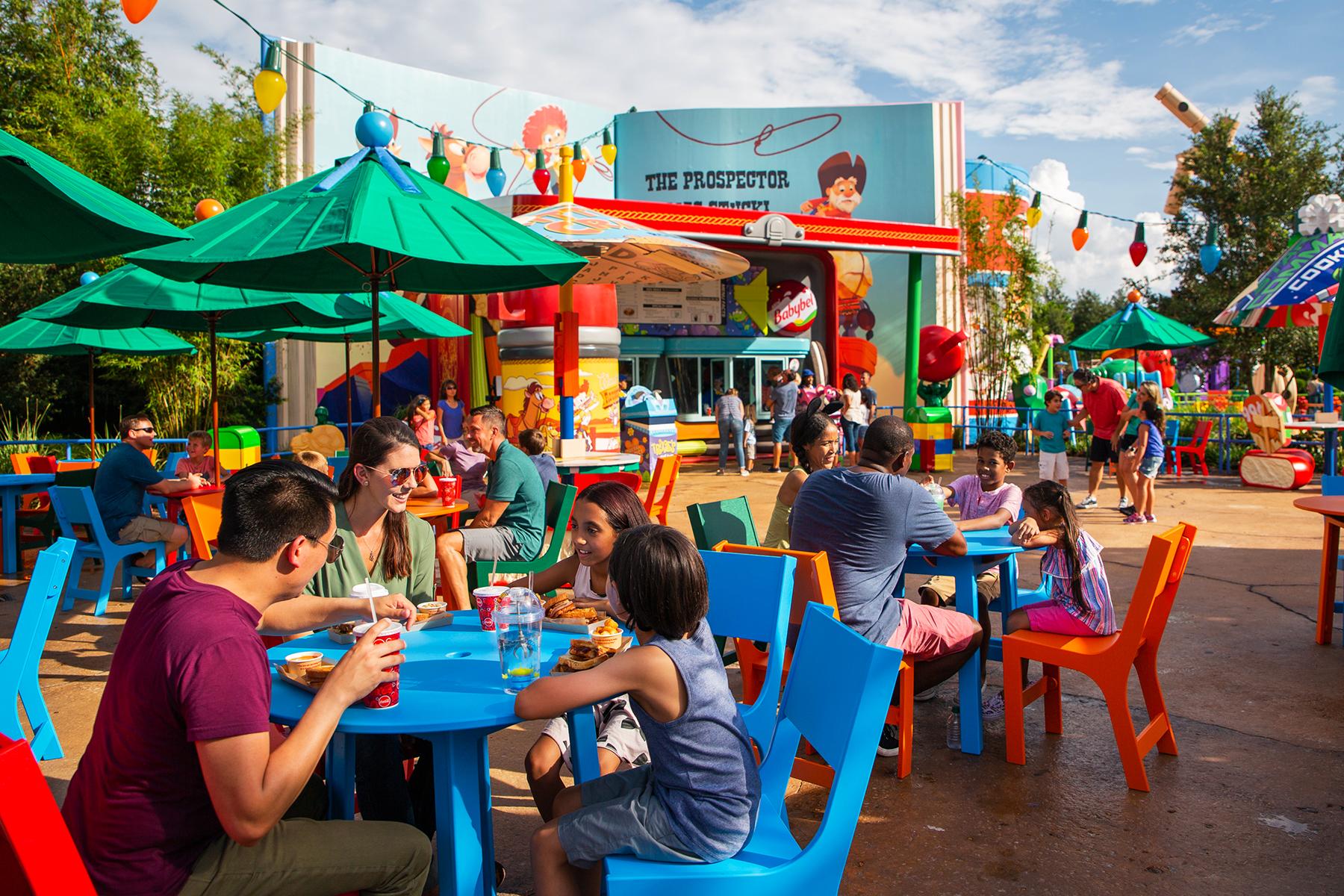 After a busy day of playing with Andy’s toys, you’re bound to be hungry. Andy doesn’t want his toys to get hungry so he used a Woody-themed lunchbox and thermos to set up a picnic for his green army men. Woody’s Lunch Box is the new quick-service restaurant inside Toy Story Land. It serves a modern take on classic lunchbox fare. The grilled cheese includes a layer of cream cheese and cheddar spread to ensure a nice gooey center and you’re not going to want a plain grilled cheese again. And with breakfast offerings like s’mores French toast (ganache and marshmallow sandwiched inside French toast and topped with graham cracker crumbles) you’re going to decide that breakfast for dessert is totally ok while on vacation. There are also ice cream sodas and adult beverages. 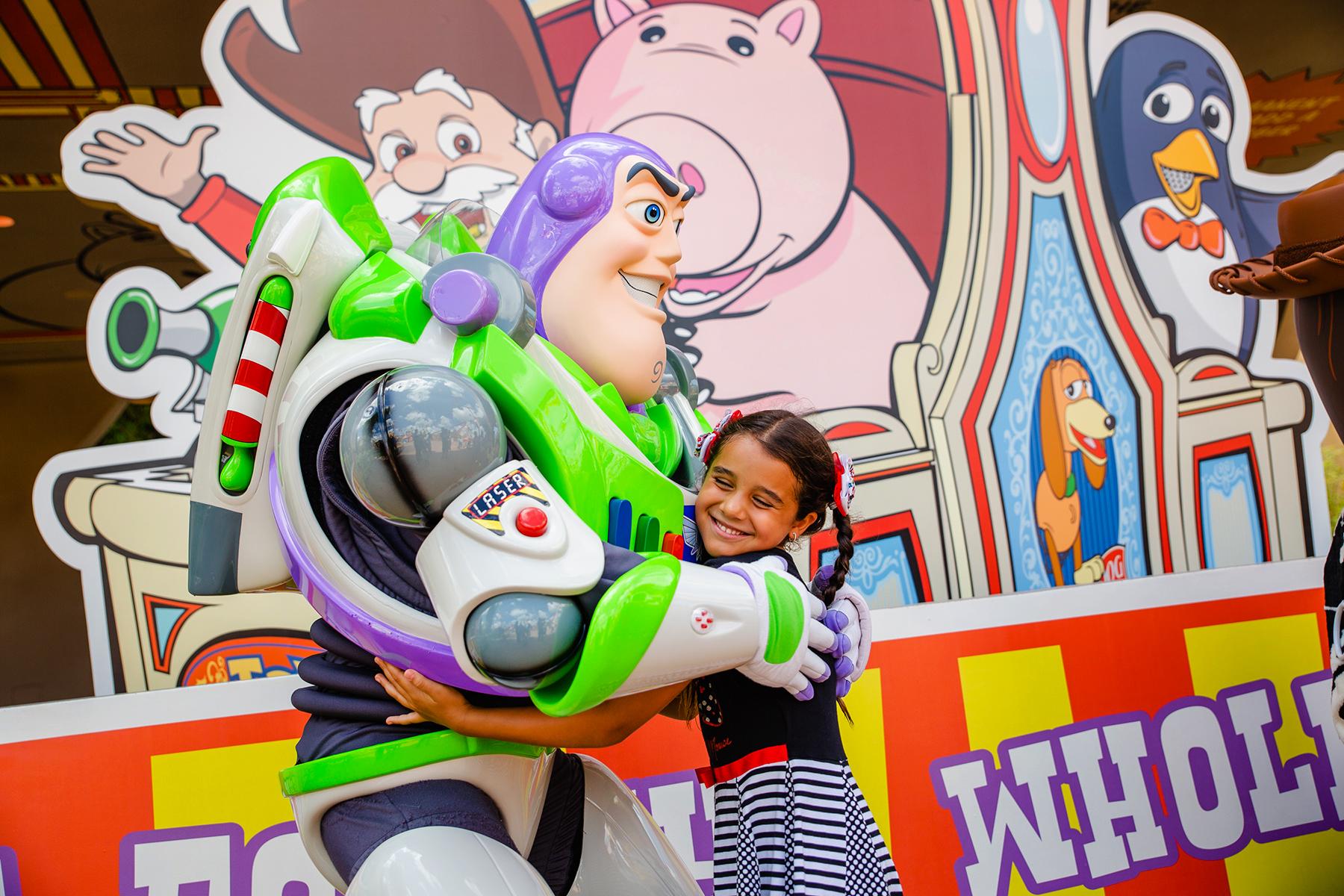 Woody, Buzz, Jessie, and the Gang

What fun would being an honorary toy be in if you didn’t get to see your favorite toys along the way? Sheriff Woody greets new toys at the entrance of Toy Story Land and Buzz towers over the Alien Swirling Saucers. Jessie and Rex have a tug-of-war over a string of Christmas lights above Slinky Dog Dash. There are green army men throughout and Mr. Potato Head is the “Boardwalk Barker” in Midway Mania. Even Wheezy makes an appearance crooning You’ve Got a Friend in Me with the help of RC and Mr. Mike at the end of Slinky Dog Dash. 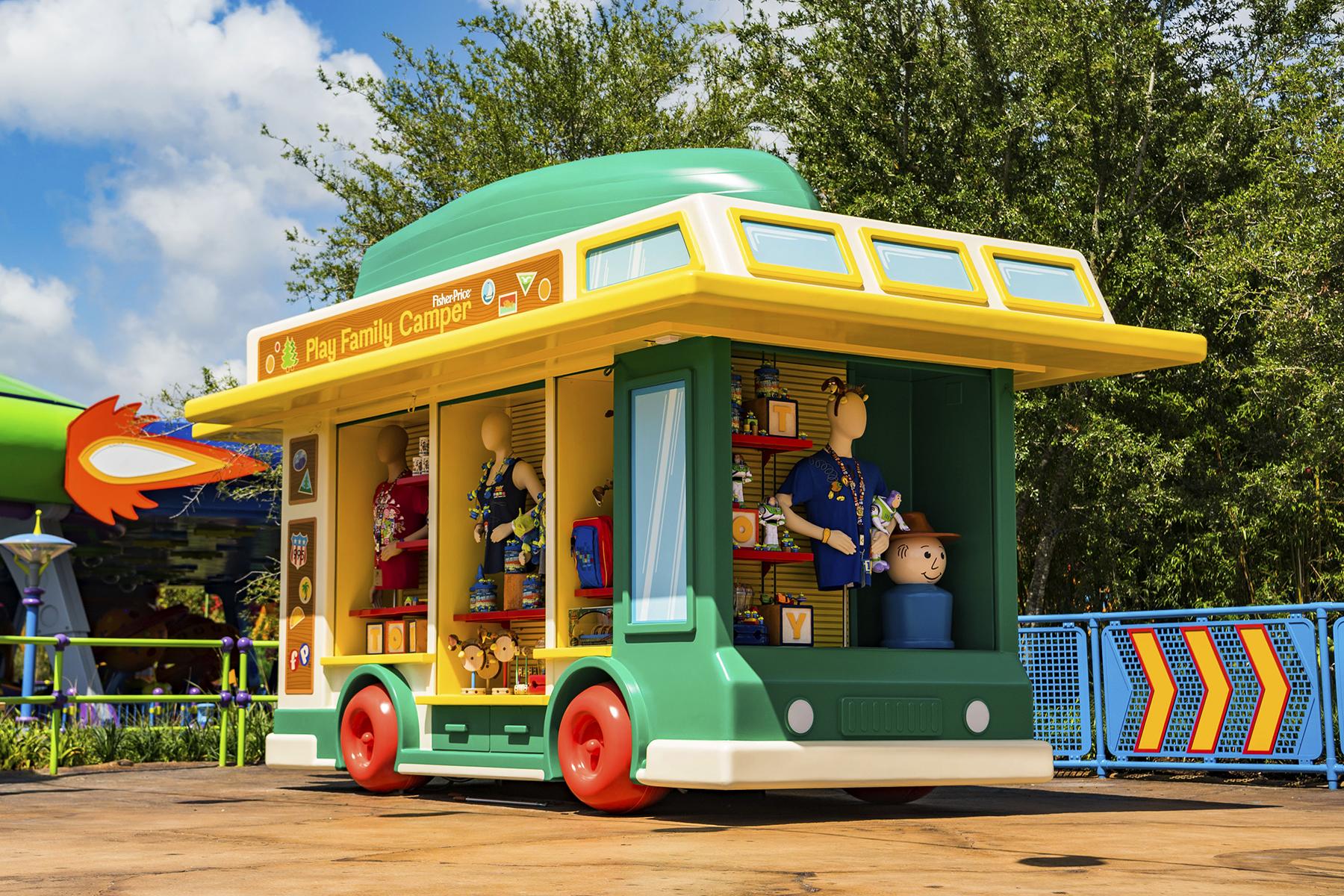 There are two merchandise stands (shaped like a toy dump truck and toy camper) located in Toy Story Land where you can get your own toys to take home. There are replicas of the ride cars (a slinky dog or an alien’s flying saucer), branded apparel, tote bags, and more. And if you want to wear your toys, there is a light up slinky dog that can both be worn and played with. Or there are Slinky Dog headbands or a light-up alien headband that changes light patterns with every move of the head. 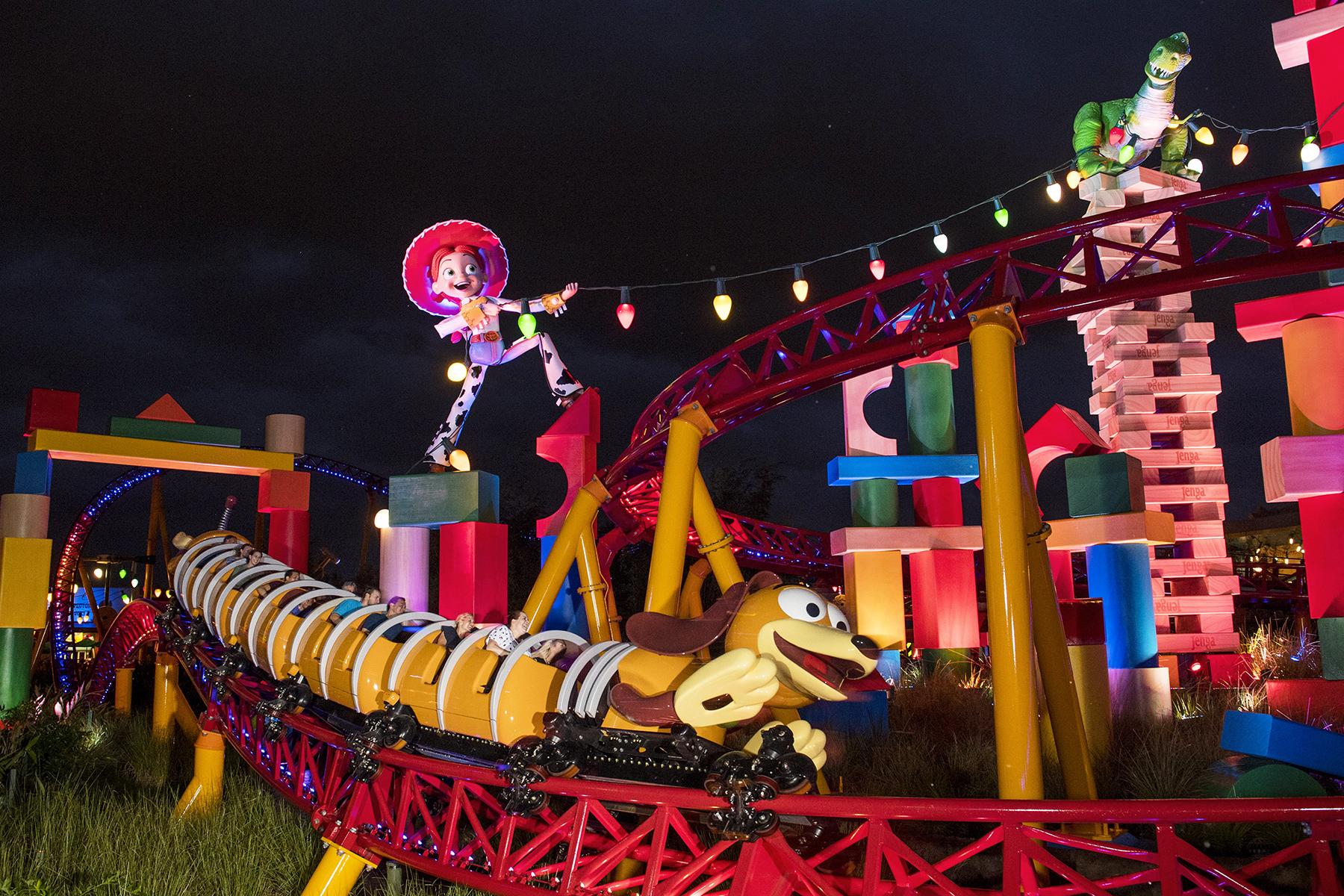 At night, Andy’s Christmas lights come on. The walkways are lit with giant Christmas lights hanging from Tinker Toy light posts and Slinky Dog Dash lights up with multi-colored lights along the track. 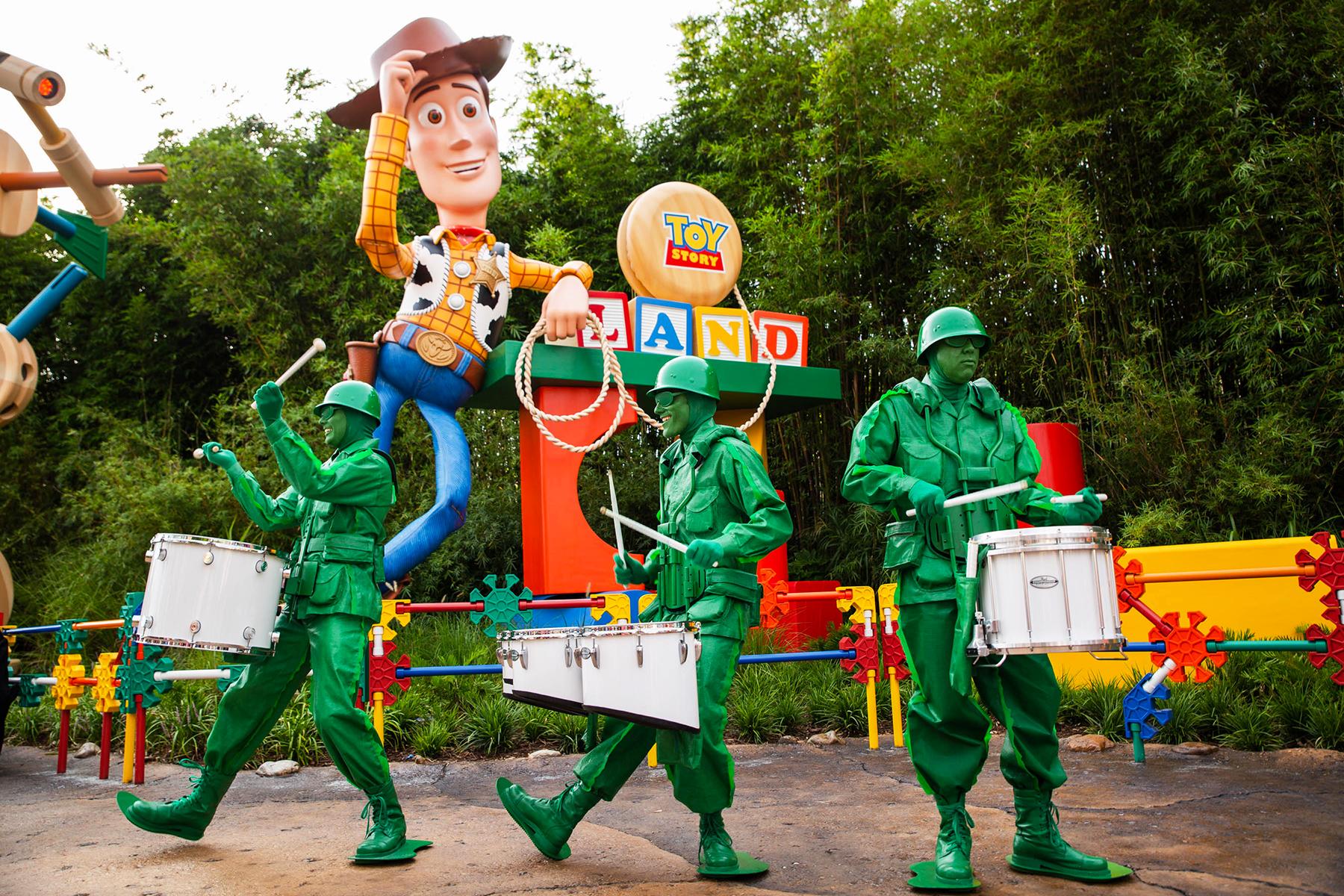 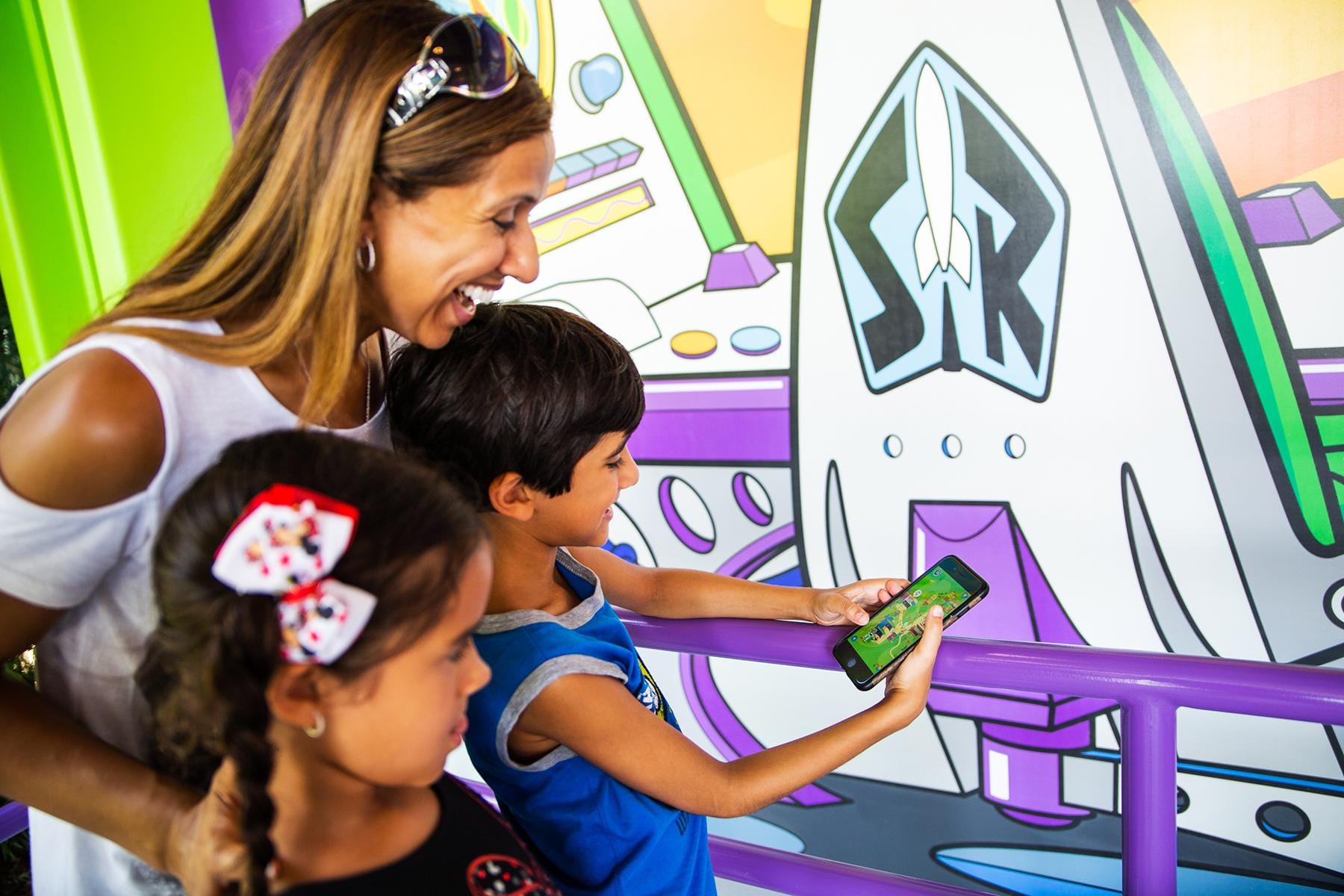 In conjunction with the opening of Toy Story land, Disney also launched its newest app, Disney Play. It’s available for free download in both the App Store and Google Play and gives you a new way to spend your time waiting in line. Download the app and discover special themed games depending on where you are. While waiting in line at Slinky Dog Dash, you can play “Andy’s Board Game Blast” before boarding a pirate ship at Peter Pan you can discover happy thoughts with Tinker Bell, and complete a set of intergalactic missions while waiting on Space Mountain. The games were designed to be played with families as well as interact with the physical environment around you, so it’s not just another app to keep your head buried in your phone. There is also Disney trivia, and if you have an Apple Music account you can even listen to curated playlists influenced by the parks.