While the marquee holiday events are canceled, the Mouse House is offering modified magic to make spirits bright.

Christmas at Walt Disney World is an experience to behold. The vibe—even for secular folks like myself—is heartwarming, joyous, and, well, magical. Elsa decks the halls of Cinderella’s Castle with tens of thousands of twinkling, icy lights. It “snows” on Main Street U.S.A. despite the Central Florida heat. And EPCOT hosts winter holiday celebrations with cultural traditions from all around the world. It’s an incredibly special time to visit the parks. But this year, amid the COVID-19 pandemic, the most wonderful time of the year will look different at The Most Magical Place on Earth.

Most of the traditional fanfare is on hiatus, a winter surge of cases is on the horizon, and thousands of cast members (Disney lingo for employees) have been laid off ahead of the holiday season. But Mickey’s gates are still open for a shorter Yuletide from November 6 to December 30 with fewer hours than Christmases past and scaled-back experiences, from brand-new projections to socially-distanced Santa sightings. Here’s everything you need to know about visiting the parks this year for the holidays. 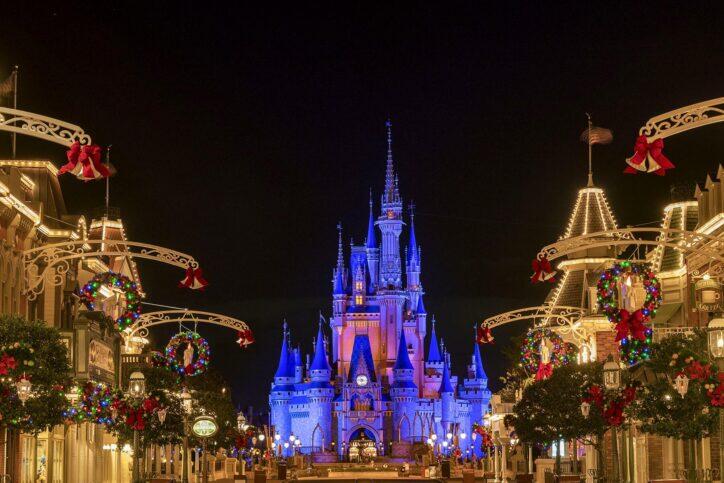 When there’s not a global health crisis, all four Disney World theme parks are bursting at the seams with festive entertainment and seasonal premium events, such as Mickey’s Very Merry Christmas Party. However, all of these things draw a crowd and that’s exactly what can’t happen in a pandemic. So, Mickey’s after-hours party is canceled and shows that would cause guests to bunch up and cluster, such as “A Frozen Holiday Wish” in front of the castle, are canceled, too.

But that doesn’t mean there aren’t any spectacles to see. “Mickey’s Once Upon a Christmastime Parade” obviously isn’t happening, but vignettes from the parade have been modified to showcase beloved characters in spontaneous cavalcades and mini floats as opposed to timed, crowded mega parades. The fan-favorite Toy Soldiers will still march around the park, and this year they’ll do so with the Main Street Philharmonic band. As for the castle, Elsa won’t be conjuring up a winter wonderland or bedazzling Cindy’s castle with ice crystals, but there will be something special to look at (and it’s brand-new)! Augmented projections will coat the castle in “a rotating series of designs including a whimsical Christmas sweater and a regal overlay of red, green, and gold ornamentation.”

Character meet and greets are still a no-go, but you’ll find Minnie Mouse and Santa Goofy over at Hollywood & Vine in Disney’s Hollywood Studios for a modified character dinner. At EPCOT, Anna and Elsa will appear in a new “Frozen Holiday Promenade” and Anna will be dressed up in her best royal regalia a la Frozen 2. If you’re looking for the mouse that started it all, you can see Mickey and other pals in the “Mickey and Friends Holiday World Tour.” And as for the big man himself, Santa will have “special pop-up appearances” at each park where he’ll be “waving and exclaiming holiday wishes to all.” He’ll even visit Disney Springs, Disney’s outdoor shopping center, in a pontoon boat with Mrs. Claus!

Of course, one of the most magical elements of Christmas at Disney World is the decorations. No other theme park does themes like Disney. And at the holidays, everything gets dialed up to an 11, from the Magic Kingdom’s 65-foot Christmas tree to a series of mesmerizing marionettes inspired by critters in the snowy arctic at Disney’s Animal Kingdom. This year, the decorations will still be there, but they won’t be as massive and over-the-top as years past. Mickey-shaped wreaths? Yes. But no life-sized gingerbread house in the lobby of Disney’s Grand Floridian Resort & Spa. 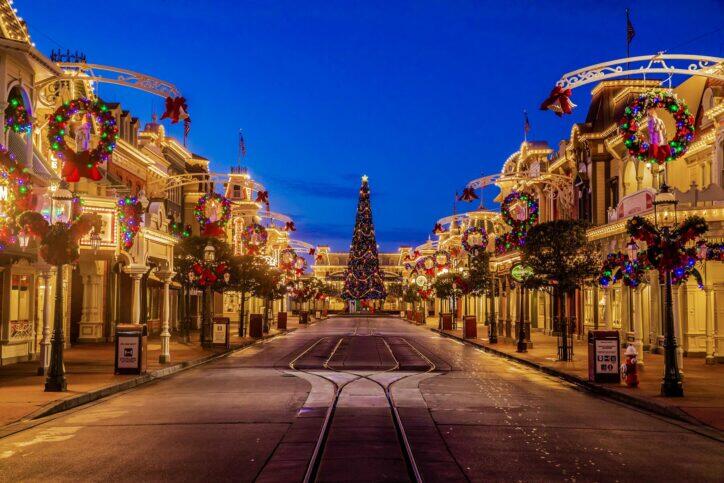 While Christmas kicked off at the Magic Kingdom on November 6, EPCOT’s celebrations won’t begin until November 27. The park’s annual International Festival of the Holidays has been scaled back and reimagined as a “taste of” event, but there will still be a way for kiddos (or kids at heart) to learn about holiday traditions around the world. “Olaf’s Holiday Tradition Expedition” is a new scavenger hunt around the park’s World Showcase designed to teach guests about holiday traditions in other cultures. Once completed, you’ll receive a gift “worth melting for.”

Unfortunately, EPCOT’s iconic candlelight processional featuring choirs from around the world and a celebrity reading of the Christmas story won’t be happening this year. But over at World ShowPlace next to the France pavilion, you’ll be able to hear traditional Christmas songs during “JOYFUL! A Celebration of the Season.” This venue is indoors and traditionally the gospel ensemble for this performance is big, so it might be a more scaled-back, socially-distanced performance this year. Regardless, it’s a must-see if you love Christmas music. 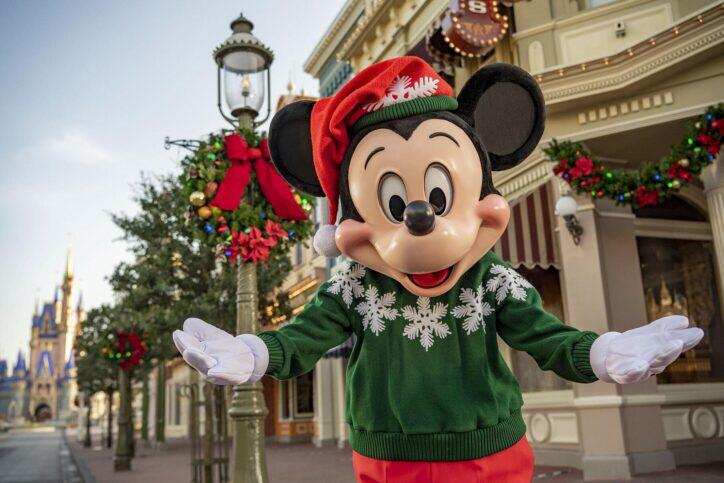 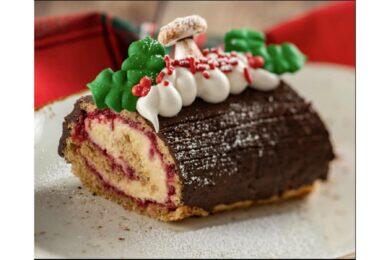 While so many things have changed in the parks this year, from new ticket reservations to navigating ride queues covered in plexiglass, one thing hasn’t changed: all the Christmas food. Decorations and entertainment may be condensed, but these bites and sips are as over-the-top as ever. There’s a double-decker Christmas tree cupcake with a red velvet hidden Mickey baked inside at Magic Kingdom. And as part of the Taste of EPCOT International Festival of the Holidays, the Canada pavilion will have a maple bûche de noël log with maple mousse and teeny, tiny edible candy mushrooms. Even the Avatar planet of Pandora over at Animal Kingdom will celebrate Christmas with a white chocolate peppermint cream cheese mousse that looks both alien-plated and incredibly chic.

It’s kind of Christmas-lite at Disney this year. And amid the pandemic, the parks have already been Disney-lite. If your top priorities are seasonal bites and shopping for holiday-themed merchandise, you likely won’t notice a big shift—besides the constant hand sanitizing. (Personally, I’ve got my eye on these plush faux fur Minnie ears.) But if Christmas at Disney for you means watching Castle Dream Lights or the incredibly moving Christmas concerts and choir performances, that’s not there this year. Because, after all, people—cast members—make that magic happen. And like hugs from Mickey, they’ve disappeared. If you do visit Disney World this holiday season, the real Christmas spirit might be making a donation to the Cast Member Pantry instead of buying an extra souvenir. The food bank is helping furloughed and laid off theme park employees keep their pantries stocked during this uncertain time.