When not splitting open hundreds of oysters a day at a speed of four to five seconds each, he is reading about them, making videos of himself shucking to hone his skill, or slurping the bivalves raw.

Walking into the old Florida-style building known as Hunt’s Seafood and Oyster Bar, the first thing you see is an aluminum-covered bar with a young man grinning as he shucks oysters at preternatural speed. His name is Honor Allen and he is just 26 years old but has already captured three consecutive Florida Seafood Festival and U.S. Oyster Festival titles as the fastest oyster shucker around, an entry requirement for the International Oyster Cup. Allen is a Panama City native steeped in oyster culture and is the current U.S. Oyster Shucking Champion.

After years of volunteering and watching from the sidelines, Hunt’s hired Allen as a full-time shucker when he turned 18. “I saw those guys behind the bar shucking and laughing and I knew I wanted to be a part of it,” Allen explained. “I love that salty, briny taste you get from oysters. You can taste the place they came from in an oyster. Even oysters from different sides of a bay taste different based on [the] algae it is consuming and the mineral content of the water. I love learning about places all over the world from the taste of their oysters.” And Allen has tried them all over the world from China to Ireland, to across the United States, but his favorites still come from Florida’s Gulf Coast.

“There’s an ever-growing demand for consumption of oysters…but the wild population is declining because it can’t grow quick enough to get to a reproductive state before we start harvest them.”

In July of 2020, Allen took the next step in his journey with oysters when he signed on to manage Fiddler’s Point Oyster Company in Panacea, hoping to help restore the beds and the tradition of plump Apalachicola oysters through aquaculture. When asked about the change, Allen said, “For me, this is the next step to get a little bit deeper and get a different view of the oyster industry. I’ve been wanting to try farming for the last couple of years, and the more I read about how passionate farmers are about their oysters, and how supplies are starting to plummet, the more I wanted to get involved in aquaculture and understand how it might be able to supplement demand for the wild oyster.”

Supply is an issue not just on the Gulf Coast, but worldwide. “There’s an ever-growing demand for consumption of oysters—there’re more oyster bars popping up, more vendors that sell them, but the wild population is declining because it can’t grow quick enough to get to a reproductive state before we start to harvest them,” Honor said. 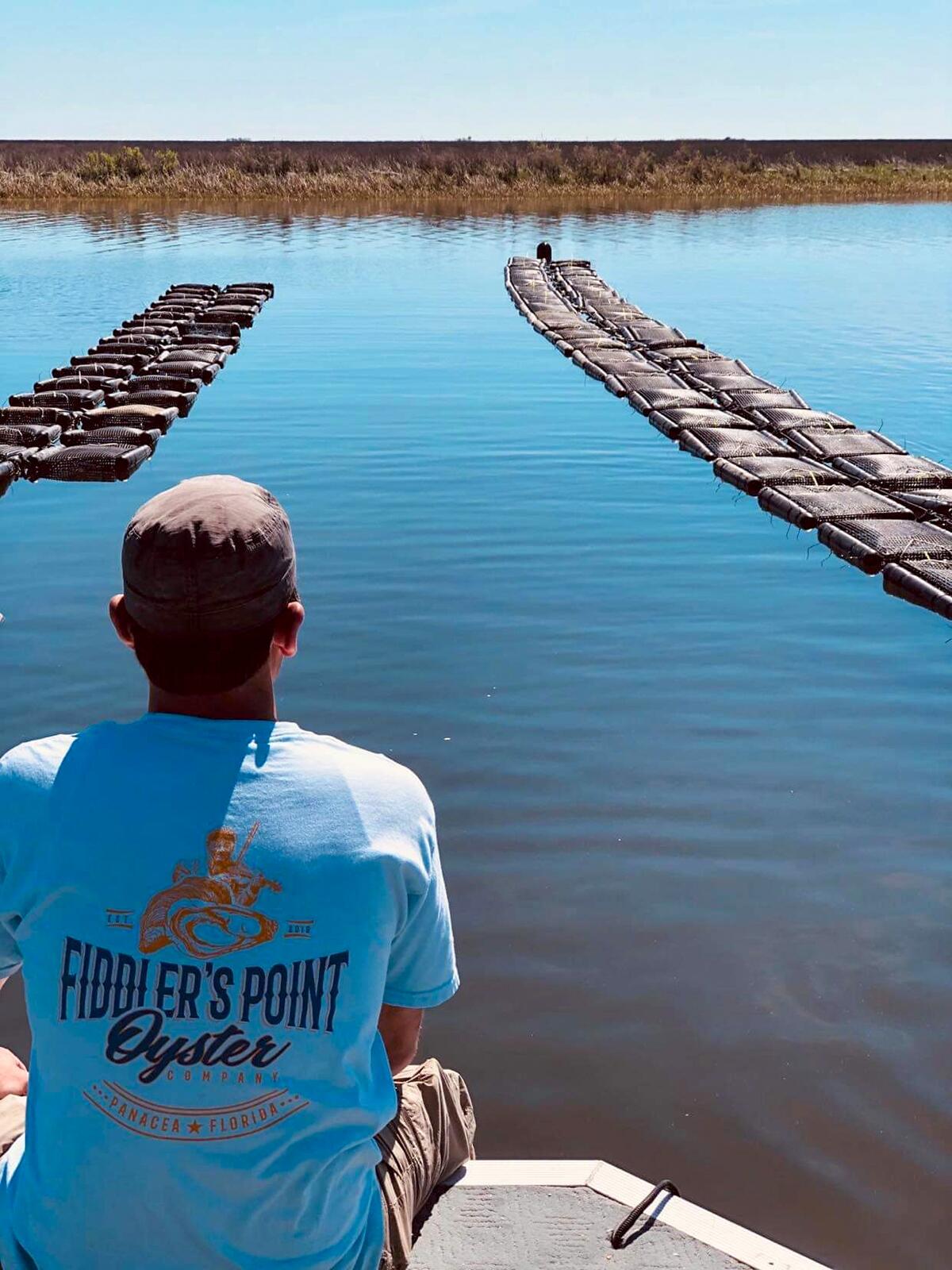 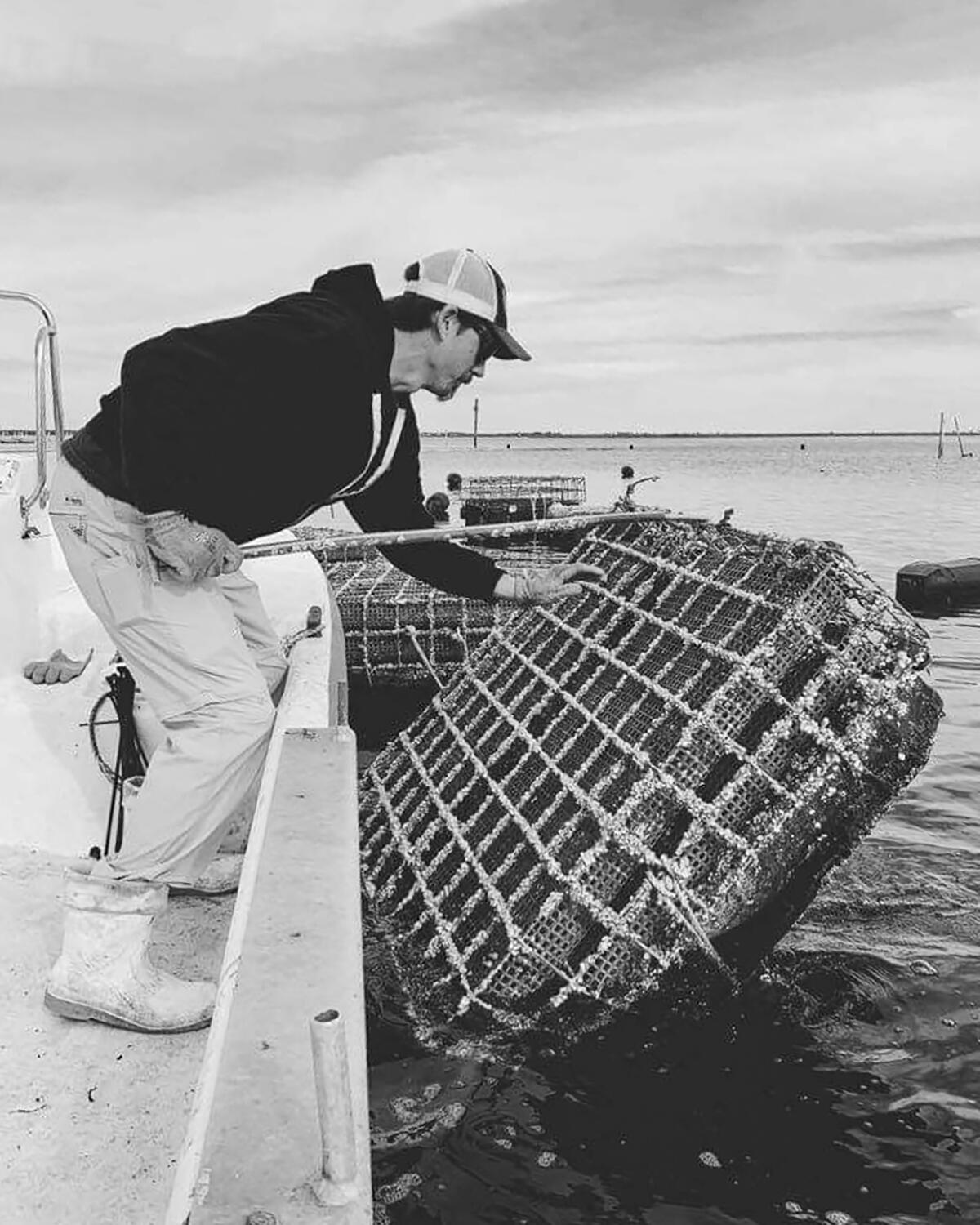 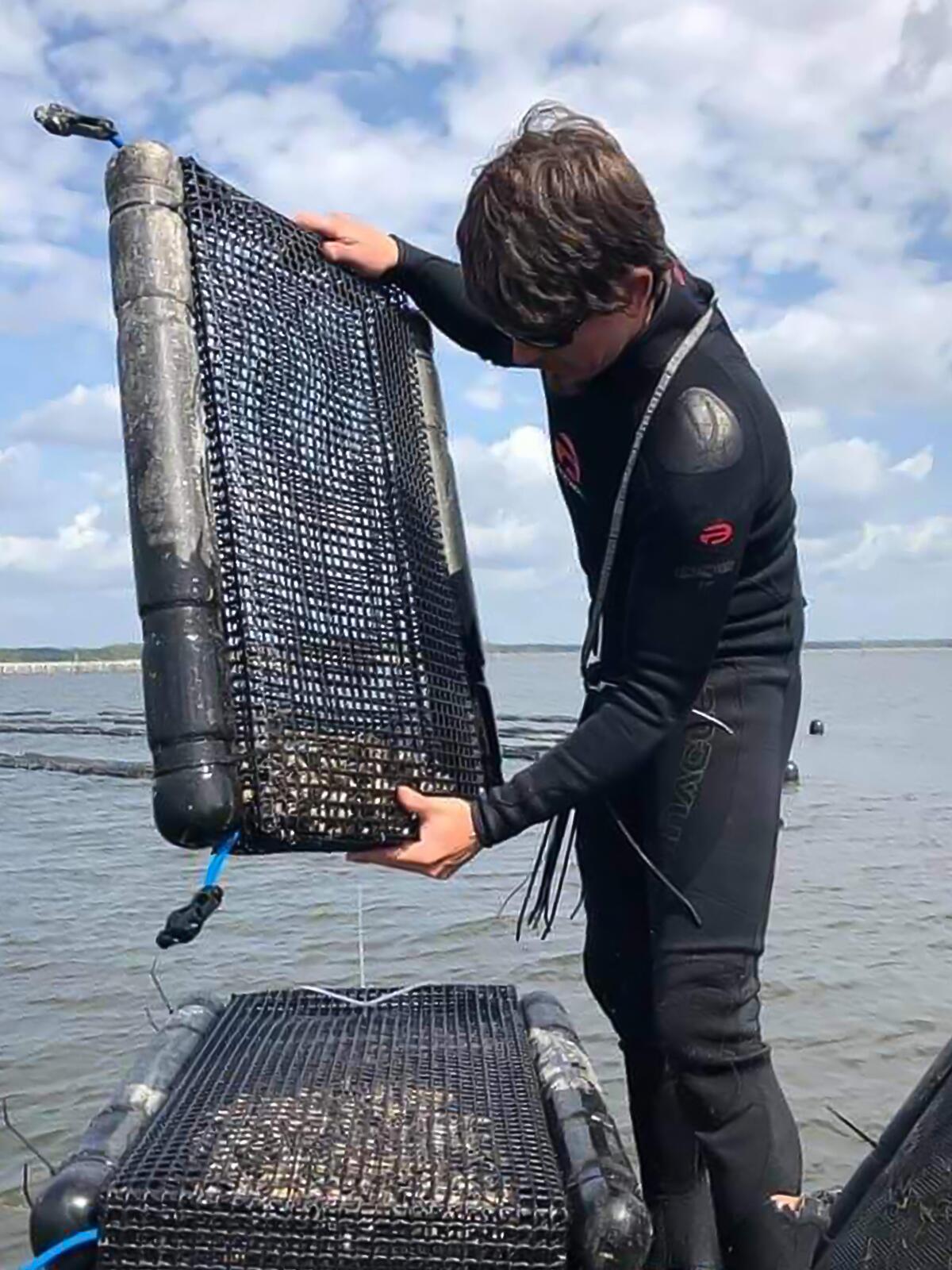 Oyster farms may hold the key to the sustainability of the superfood. Seafood farming has a stigma attached to it because of the poor practices associated with shrimp and salmon farms where the seafood is exposed to fertilizers and antibiotics, but oyster farming is different. “We get the seed from hatcheries and we essentially grow them until they reach market size, about eight to 10 months. They eat what is naturally in their environment. The water is tested weekly. Everything is about the care. It’s very labor-intensive, but at the same time, gratifying when you’ve got beautiful, perfect oysters that started a little bit smaller than a fingernail.”

Seafood farming has a stigma attached to it because of the poor practices associated with shrimp and salmon farms where the seafood is exposed to fertilizers and antibiotics, but oyster farming is different.

The advantage of farmed oysters over wild, beyond protecting the delicate bay and estuary ecosystem, is the uniformity and quality of the product. Each oyster at a farm is meticulously cared for to produce the best example of merroir, or place-based taste, and optimal size to fill a cracker, which is what you want according to Allen.

He now supplies the community where he got his start. When not splitting open hundreds of oysters a day at a speed of four to five seconds each, he is reading about them, making videos of himself shucking to hone his skill, or slurping the bivalves raw, his favorite preparation. The 2020 global competition in Galway was canceled because of COVID-19, but Honor Allen is ready for September 2021 and hopes to bring home an international win to the home of Apalachicola oysters. You can follow Allen’s journey to the International stage via his Facebook page.

Allen shared some of his favorite places and preparations to get his food of choice, Gulf Coast Oysters.

For now, this is the only dedicated seller of Fiddler’s Point Oysters. Allen keeps the place that gave him his start supplied and suggests, “No matter what your plan, eat the first couple of them just by themselves, really taste them.” Allen likes his raw and unadorned so you can dig into the flavor and taste of the place they come from. Hunt’s has many preparations available from steamed to baked, but make sure to get some raw and taste what Allen has been up to at Fiddler’s Point Oyster Company.

Hurricane Michael hit Panama City hard and Uncle Ernie’s was not spared. But they are back stronger than ever with a gorgeous new building offering upper deck views of St. Andrews Bay. Uncle Ernie’s take on oysters is a little different than an oyster bar. They have an Oysters Parmesan appetizer which is similar to a stew, but it is their fried oysters that are the real star. Served sandwich-style or as an entree, they are plump, lightly breaded, and amply portioned.

There is a lot to love about this hidden gem, including their live music and seafood specials, like the seasonal crawfish boil. They have a full New Orleans-style menu, including Sunday brunch. The gumbo is smoky and rich, the craft beer selection is vast, but the oysters are what you travel for. They serve them fried, blackened, raw, and baked with various toppings. Make sure to get the Cajun Oysters Rockefeller—they are topped with a rich sauce of butter, parsley, spinach, bread crumbs, and some secret ingredients all baked to golden perfection.

A longtime local favorite, Dusty’s on Front Beach Road claims it’s known for “warm beer” and “lousy food” and homage to their dive bar mystique. Do yourself a favor, get there early and get a seat at the oyster bar. Watching the salty shuckers rip through dozens of oysters is better entertainment than you will get anywhere else on the beach. Oysters are served by the dozen, on old-fashioned plastic cafeteria trays, beer is served in Solo cups, and they bring you a jug of their homemade cocktail sauce and a basket of saltines for your pre-meal poor man’s oyster (crackers with cocktail sauce sans oyster). The raw are succulent and briny, but ask for the three-cheese jalapeno baked. They are not on the menu, but they used to be, and only locals know. 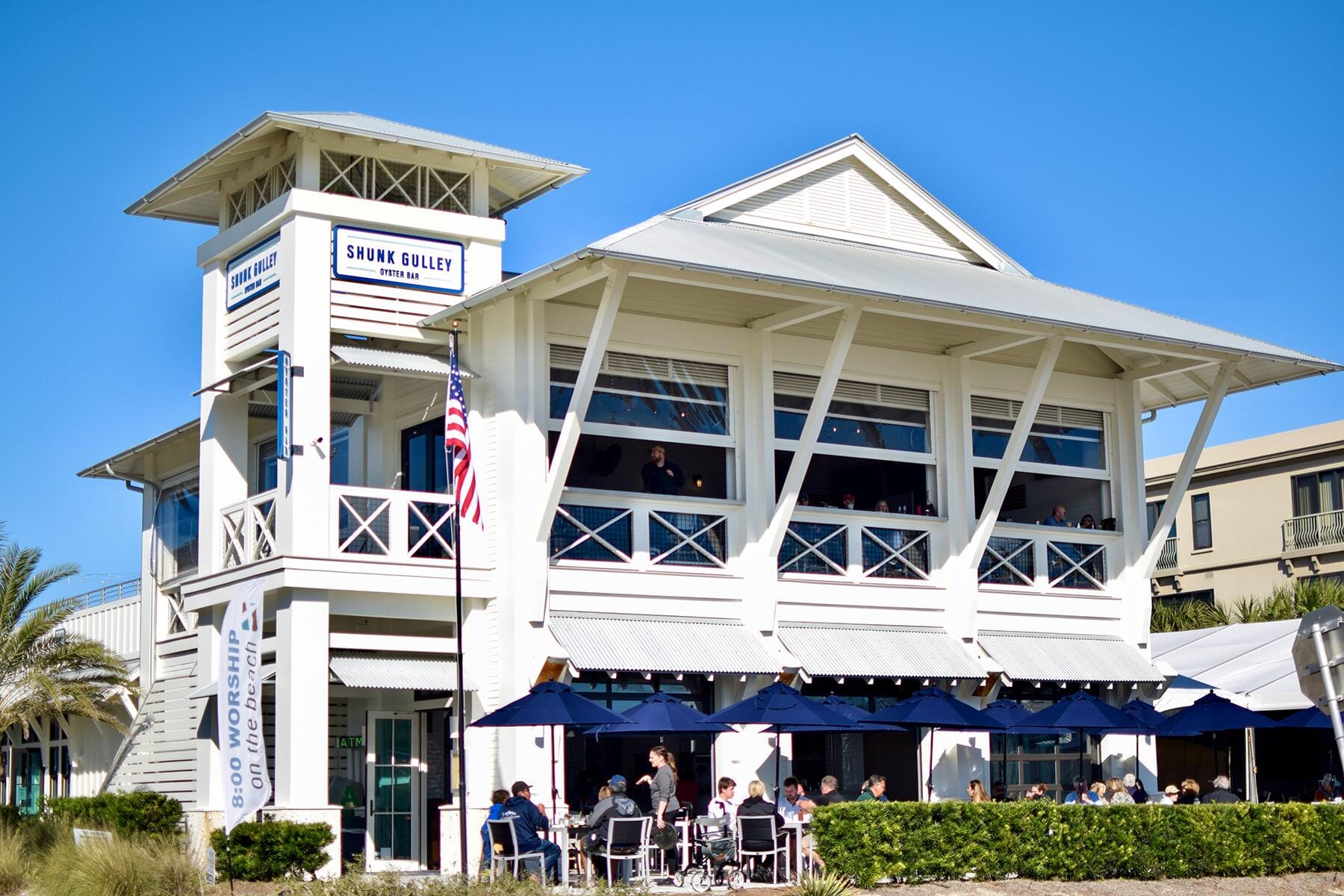 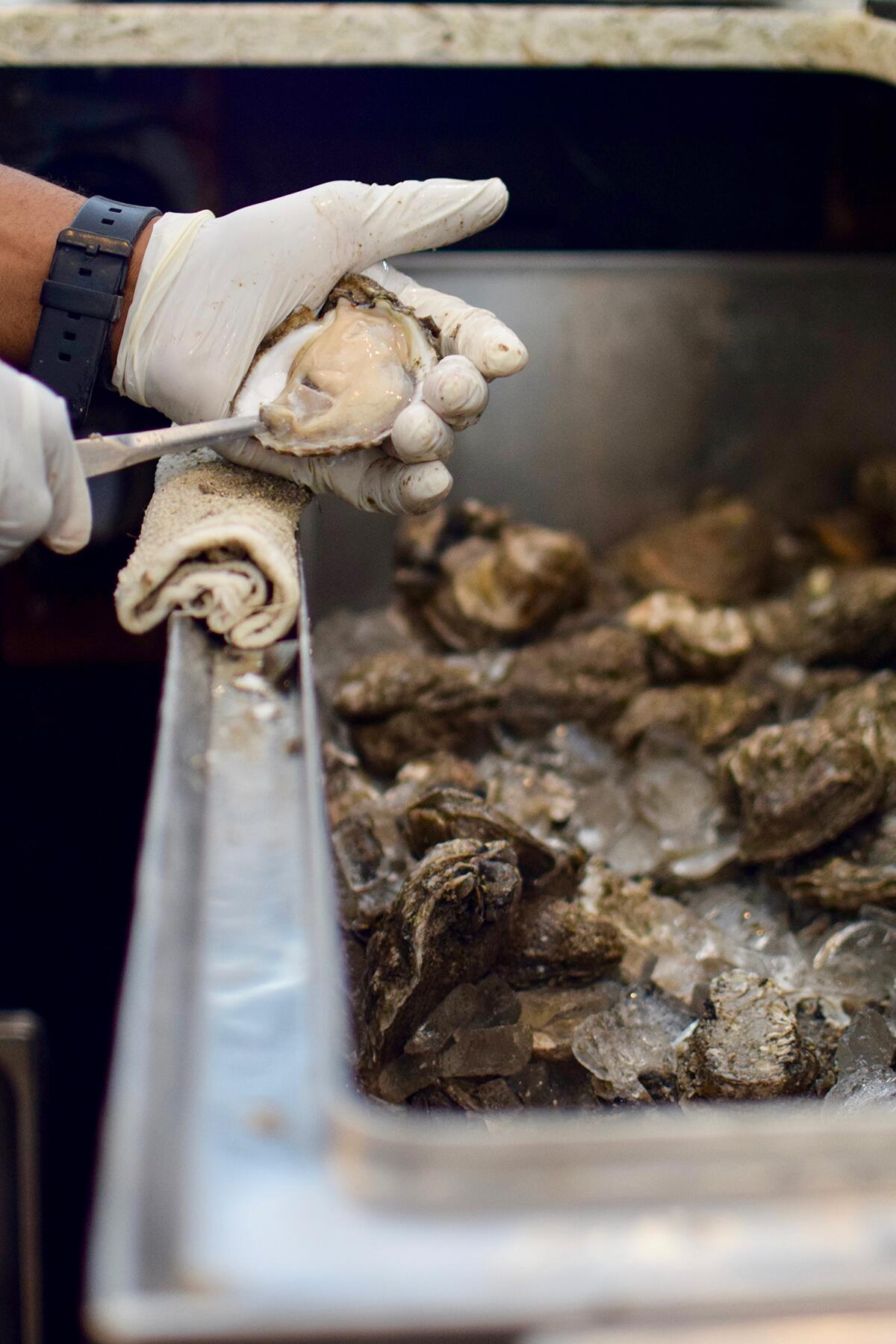 Set at the intersection of Scenic 30A and Highway 393 sits Shunk’s Gulley, a partner of South Walton Artificial Reef Association and champion for Oyster Aquaculture. Pristine gulf views are on display through the two-story, open-air restaurant. Honor Allen has run oyster shucking demos and highly recommends the oysters, which are locally-sourced. Make sure to try the grilled oysters, a unique specialty of Shunk’s. Chipotle BBQ Oysters prepared with Maker’s Mark Bourbon, chipotle lime butter, brown sugar, garlic, and chives are perfect with a signature Sunset Mule to enjoy the sun going down over the Gulf Coast.

I can't believe most of those shuckers are only wearing plastic gloves or no gloves at all. That's pretty dangerous.  Most of the shuckers in New Orleans wear kevlar or similar gloves so they don't cut up their hands.