Key West, Florida, is known for many things: its rum-soaked, tropical island delights for tourists, Ernest Hemingway’s former residence (and watering holes), and its namesake key lime pie. But the Conch Republic is also an unexpected queer destination brimming with LGBTQ history. That tradition lives on today, in the island city’s many LGBTQ-owned businesses, from colorful festivals to low-key romantic getaways.

One of the first cities in the United States to elect an openly gay mayor⁠—Richard A. Heyman in 1983⁠—Key West has become a haven for offbeat artists, outcasts, and people looking for escapes and extremes. In the late ’80s and early ’90s, HIV/AIDS activism flourished here, and the city made it grassroots-official in 2000 when HIV-positive advocate and leader James Thompson started the “One Human Family” movement, which became a local mantra and motto.

Today, Key West’s reputation as a gay wedding destination and history of activism amid Floridian resort paradise trimmings has spawned a number of thriving LGBTQ guesthouses and resorts, arts events, restaurants and bars, festivals, and even water excursions.

Just 10 minutes away from Key West’s historic Old Town area, this gay-owned guesthouse is a tranquil haven tucked into a renovated early 20th-century home in the traditional Conch architectural style. A popular destination for LGBTQ weddings, honeymoons, and anniversary getaways, Alexander’s Guesthouse is a quiet alternative to the city’s rowdier nightlife, with a daily tropical poolside breakfast, a 24-hour jacuzzi, and a lending library brimming with books. You can catch a famous Key West sunset on one of the three outdoor sun decks, two of which are clothing-optional in certain sections.

INSIDER TIPDon’t miss Happy Hour at the Pink Money Bar by the pool from 4:30-5:30 pm every day before you head out for the evening.

At the entrance to the famous White Street Pier stands a sobering reminder of the devastating toll that the HIV/AIDS crisis took on the LGBTQ community in Key West and elsewhere. The monument, engraved in Zimbabwe granite, was dedicated in 1997 and features the names of over 1,000 Key West-connected individuals who died during the AIDS crisis. Quotes from Alfred Tennyson, Kahlil Gibran, and others are also carved into the stone. Community members visit the memorial to take a reflective moment to remember the lives lost against the backdrop of the sunset pier.

INSIDER TIPA candlelight march and Reading of the Names ceremony are held every year on Dec. 1 at the Key West AIDS Memorial as part of World AIDS Day.

Key West boasts an active community of drag performers, and the Aqua Bar and Nightclub has some of the best drag shows on Duval Street. The resident “Aquanettes” and other performers from both in and out of town perform every night of the week. The floor is often packed with late-night dancers during the famous two-hour “Reality is a Drag” show, while the outdoor Back Bar can be a little quieter. The shows are interactive and rowdy and the crowds are often tipsy, so be ready for a lively night if you hit up Aqua.

INSIDER TIPRemember to bring $1 bills with you to tip the drag performers. 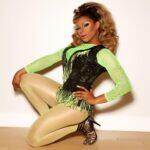 RELATED STORY
Gulf Coast Queens: Not Your Mama’s Drag
4 OF 10

Lose Your Inhibitions at This Lively Duval Street Hotspot

Bourbon St. Pub is one of Duval Street’s liveliest gay bars, hosting live VJs and DJs all week long and festivals throughout the year. Five bars of varying sizes, countless drink specials, and ample space to dance attract huge crowds for themed parties and live performances. The shirtless Men of Bourbon perform every night starting at 10 pm, while the outdoor Garden Bar, featuring a pool and jacuzzi, is men-only and clothing-optional.

The all-male New Orleans House is conveniently located on Duval Street, perfect for vacationers who want to get in on the nightlife action without having to travel far. Affordable and friendly, this guesthouse is known for its free continental breakfast overlooking Duval Street every morning on the sunny Grand Balcony. Other features include a 15-man jacuzzi, 24-hour gym, free nightly happy hours, and a clothing-optional sundeck. Guests get free access to Bourbon St. Pub and the drag shows at the nearby 801 Bourbon Bar every night.

INSIDER TIPAlthough New Orleans House is smack-dab in the middle of notoriously noisy Duval Street and just above a pulsing dance floor, there are quieter rooms available upon request.

Island House, one of Key West’s most well-known gay men’s resorts, is a clothing-optional getaway on historic Fleming Street with a wide range of rooms, from more basic accommodations to deluxe suites complete with direct pool access. Outdoor showers, jacuzzis, saunas, and steam rooms, along with a 24-hour cafe, bar, health club, and spa, make the resort more like an all-hours playground than a hotel. Guests and staff alike strip down for naked pool parties on Wednesdays and Sundays, while crowds pack the resort throughout the year for special festivals and events like Tropical Heat and Fantasy Fest.

This Art Deco-styled indie film cinema has four screens’ worth of arthouse and blockbuster movies showing all year, along with a generous concessions selection (including alcohol) and a full-fledged local art gallery. Every November, the moviehouse transforms into the home of the Key West Film Festival, including selections of LGBTQ films and Florida-focused films. This beloved film destination is a favorite for date nights and eclectic storytelling, as well as special screenings during Pride month and Monday night showings of time-tested classics.

INSIDER TIP With a Premium Tropic membership, you can get discounted rates at over 20 participating restaurants in the city.

With a motto of “Free to Be You and Me in Key West,” the annual Womenfest Key West festival has become one of the largest annual events for lesbians and bisexual and queer women in North America. Every September, women of all ages flock to Key West for the festival, which features a busy schedule of pool parties, cocktail parties at many of the city’s LGBTQ-owned and LGBTQ-friendly hotels, drag shows, sunset sails, and even flag football. Don’t miss the “spiritual” experience at the women-only Hot Dog Church cookout on Sunday or the discount rates at museums and restaurants throughout the city.

This slightly off-the-beaten-path restaurant and wine bar, owned by a gay couple, has a retro, kitschy-trendy feel and an eclectic New American menu. Flaming Buoy Filet Co. has developed a cult following over the past few years, with visitors loving its rotating menu of fresh seafood and local specials. The lobster macaroni and cheese, grilled marinated Key West pink shrimp, and chicken and waffles are some favorite dishes, along with the local beer and wine.

INSIDER TIPStar Wars fans will love plenty of the decorations, but they’ll especially get a kick out of the memorabilia in the bathroom.

Once the home of 19th-century cigar manufacturer and Cuban revolutionary Teodoro Perez, Duval Street’s La Te Da Hotel is now a historic hotel and entertainment complex with freshly renovated guestrooms. An onsite restaurant serves up an old-world fine dining experience, while the cabaret and piano bar feature nightly performances by singers and drag performers. Guests can wander through the original art collection in the lobby or grab a drink at the open-air Terrace Bar.