Amelia Island, a dagger-shaped, 52-square-mile isle just south of the Georgia border, isn’t quite as well known as other seaside destinations in Florida. On Amelia, low-key days are spent on beach chairs or boats (sailing the Atlantic, kayaking the Intracoastal Waterway), and nights involve simple pleasures like mini golf, peel-and-eat shrimp, and ice cream sundaes. The vibe is a little preppy, with a whiff of Southern gentility underscored by the Spanish moss draped across the old-growth tress. 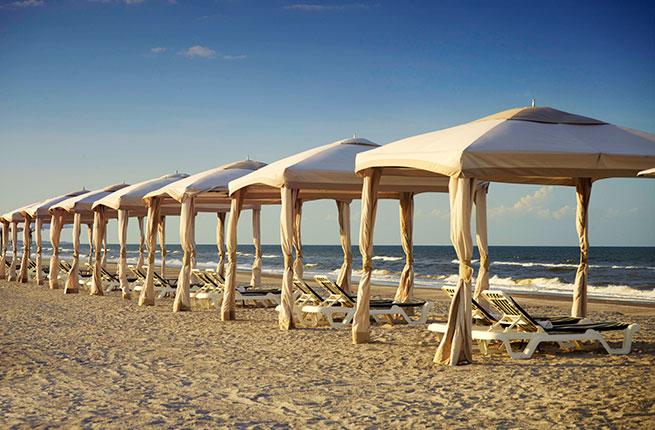 The first requirement for an Amelia Island getaway: a rental car. Fortunately, the rental cars desks at Jacksonville International are located right in the terminal by baggage claim, and the lots are just outside.

Depending on traffic, the ride to Amelia is 30 to 45 minutes from Jacksonville and fairly direct. Before you know it, you’ll be pulling into the valet lane at the Omni Amelia Island Plantation Resort (rooms from $219). Buttercup-yellow and latticed with balconies, the resort’s main building looks like a stack of sugar wafers. Clusters of condos fan out from the core; beyond, clearings in the thick, green palmetto forest hide privately owned homes, where retirees welcome visiting grandkids.

Depending on when you check in, golfers may be milling about, waiting for black SUVs to whisk them to one of three on-property courses, or a pastel-clad wedding party could be kicking off their weekend festivities. The resort averages four weddings per weekend, and surveying the 1,350-acre property, it’s easy to see why. On the natural beauty side, there are wide, empty, white-sand beaches, otherworldly marshlands, and semitropical woodlands that feel like they could be inhabited by storybook characters. On the man-made beauty side, Omni invested over $85 million into renovating the entire resort with elegant design choices, from the driftwood chandelier lighting up the lobby to the gossamer drapes in the spacious tan-and-blue rooms. Oh, and speaking of rooms, each one has an ocean view.

After settling in, head down to the double-decker pool (one is adults only) to catch some sun before slightly-earlier-than-usual happy hour.

Dinner is a 10-minute drive from the resort at Gilbert's Underground Kitchen (average main $20), an island newcomer from chef Kenny Gilbert, competitor on Season 7 of Top Chef. The menu features Southern dishes (drop biscuits, fried catfish treated like Nashville hot chicken) and meats smoked on the barbecue; go with the sampler, which includes everything from lamb shoulder to gator ribs. After dinner, go for a scoop of gelato at Marché Burette, the Omni's on-site gourmet deli, and end your first night with 18 holes at Heron’s Cove Adventure Golf ($10). 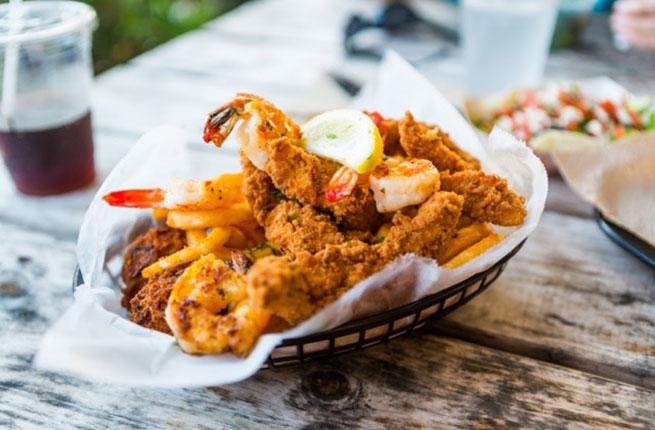 After breakfast at the hotel, head out on a complimentary tour of the Sprouting Project, started by the Omni’s head chef, who turned an old flower greenhouse into an aquaponic system that feeds 720 lettuces, greens, and herbs that make their way into dishes throughout the resort. Outside, there are orchards of kaffir lime, nectarine, Meyer lemon, a pepper patch whose firebombs factor into the house-made mango hot sauce, a root cellar where Negronis and strawberry-violet vinegar age in barrels, and 28 beehives.

Continue the local food theme at the Fernandina Farmers’ Market, 10 minutes away in Amelia’s adorable main town, Fernandina Beach. Stock up on berries, pecans, and other snacks, then head to the docks behind Brett’s Waterway Cafe to catch your private boat for an afternoon cruise with Windward Sailing (private sails from $200). You’ll get a schooled in Sailing 101 as you slide out of Fernandina's harbor and down the wide Amelia River into Cumberland Sound and the Atlantic. Dolphin sightings are likely.

After the sail, spend a few hours relaxing on deserted Fort Clinch Beach, part of the state park of the same name. Throw on your flip-flops and do dinner at Timoti’s Seafood Shak, a casual, counter-service place in downtown Fernandina. All the seafood here, served in rice bowls, sandwiches, tacos, or baskets with hush puppies and fries, is local and wild caught. Grab a can of Swedish passionfruit cider and a seat outside and wait for your name to be called. Dig into blackened mahi mahi or fried Georgia shrimp while local kids cavort around the backyard pirate ship playground.

On the way back to the resort, stop at DeNucci’s Soft Serve, a sherbet-colored ice cream shop and drive-through. This family-run spot has all the requisite sundaes, shakes, blizzards, and cones, but one thing might catch your eye: If you’re a member of the Disney World Dole Whip cult, DeNucci’s is one of the handful of places outside the most magical place one earth you can find the coveted pineapple soft serve. 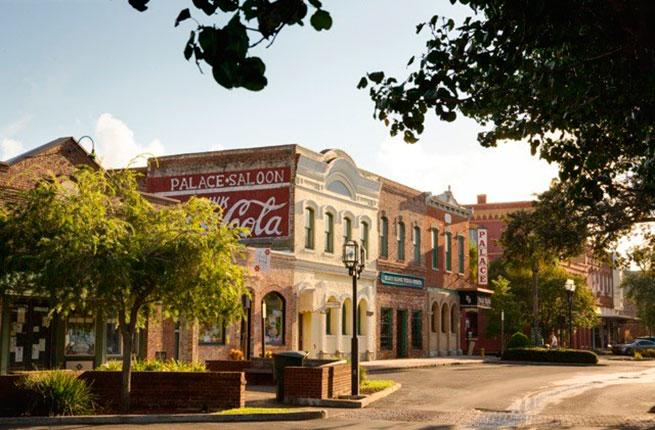 Start Sunday at Omni’s on-site Nature Center for an introduction to stand-up paddbleboarding ($55). The 90-minute guided tour will take you on a leisurely meander through the island’s marshy creeks and backwaters, home to manatees and dozens of species of birds. After, grab lunch at Oceanside—the curly plantain chips are great—and take some time to chill out by the pool or beach.

Dinner is back in Fernandina, but you’ll want to head over early since most of the shops along the main drag, Center Street, are dark by sundown.  Check out the kitschy Cinnamon Bear County Store for Southern souvenirs, the Book Loft for rare and signed books, and Lori + Lulu for luxury womenswear and accessories. Grab pre-dinner drinks at the Green Turtle Tavern, a laid-back al fresco bar with live music and a serious bourbon selection.

Dinner is right across the street at 29 South (average main $22), a mellow fine-dining spot with tables on the porch and a garden in the back. There, chef/owner Scott Schwartz grows herbs, tomatoes, peas, and other crops that might appear on the specials list—like zucchini blossoms stuffed with lemony ricotta, cloaked in tempura batter and fried. Save room for ice cream down the street at the Fantastic Fudge. In addition to their eponymous treat, this old-timey spot scoops ice cream from Florida creamery Working Cow. Yeah, that’s ice cream three nights in row. If not on vacation, when? 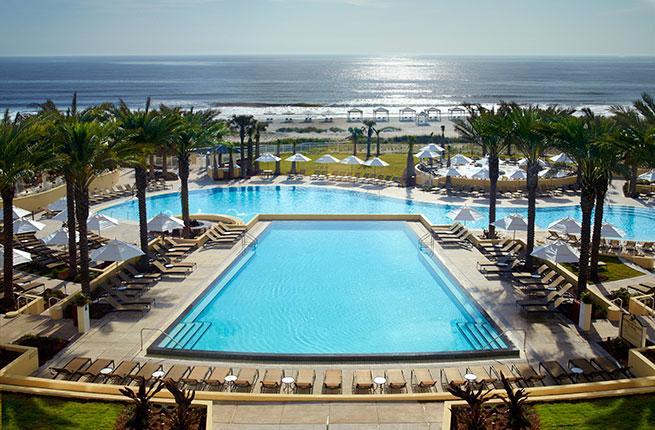 Independent inns pepper Fernandina Beach’s historic district, and there are condos of varying quality to rent down along A1A, but the Omni is a great choice. Even though it’s a large resort (404 rooms), there always plenty of pool chairs to choose from.

Unlike the resort cities farther down the Florida coast, Amelia Island doesn’t have 80-degree winter days that lure snowbirds December through March. The area warms up in April, with high season starting around Easter, running through summer (with families on vacation) to Thanksgiving.

How to get there

American, Delta, United Southwest, JetBlue, and Allegiant fly nonstop to Jacksonville from major U.S. cities. From Jacksonville, the drive to Amelia Island is about 30 to 45 minutes, depending on traffic.